TWS (Truly Wireless Stereo) earbuds have seen a big boom in the Indian market in recent months. At one end of the spectrum are the budget options like Realme Buds Air (review), Vivo Neo TWS (review), OPPO Enco Free, and others, typically ranging in price from Rs 2,999 to Rs 5,999. Then at the other end, you have premium experiences from contenders like the Apple AirPods Pro, Sony WF-1000XM3, and Jabra Elite 85t with prices ranging from Rs 17,999 to Rs 24,990. Now LG has also decided to enter the game with its new LG TONE FN7 TWS earbuds that carry an incredulous Rs 29,990 price tag. However, it appears that LG has dramatically cut cost to Rs 18,990. The TONE FN7 features include ANC (active noise cancellation), a dedicated app for customisation, transparency mode, wireless charging, and more. However, LG is banking on a very unique feature to woo customers in these times of COVID 19. The LG TONE FN7 happens to come with UVnano sanitising technology inside the case, which is said to get rid of 99 percent of bacteria on the earbuds. In this review I will try and find out if the sound quality matches up to the competition, how good is the ANC, test the battery life, and also my view on this UVnano technology. 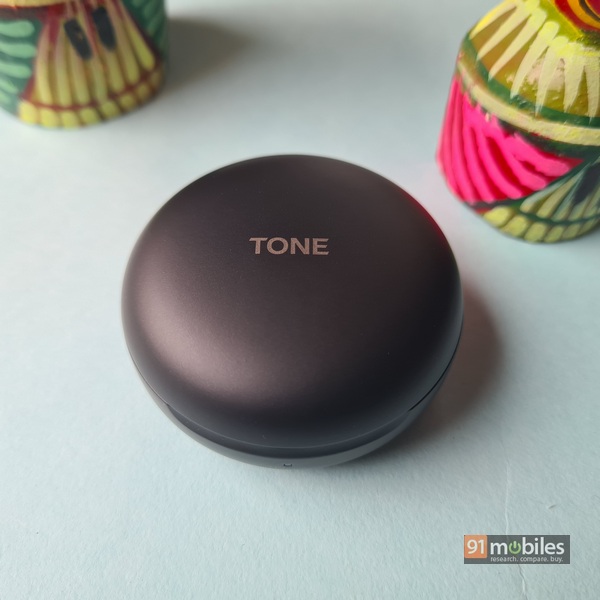 The TONE FN7 has one of the most compact and sleek cases I’ve seen in a while. The AirPods Pro and the Sony WF-1000XM3 have bigger cases that are slightly difficult to slip inside my jeans. The small circular design, with its premium matte black colour scheme, is light in the hand and easy to pop open, revealing a pair of earbuds that have matching colours and a glossy finish. The buds themselves are held together in place magnetically and there is a UV light briefly visible shining just below them. The positioning of the buds is not interchangeable but plucking them out and putting them back in is exceptionally easy. There is a single button on the side that will indicate the battery level via a strip of LED lighting. Red is for below 20 percent, yellow for between 20 – 80 percent, and green for above 80 percent. The same button can also be long pressed to enter pairing mode when the case is opened. The hinge construction is solid and does not flap around like a couple of other TWS cases I have seen in recent times. Overall, the TONE FN7 one of the sleekest and most portable case designs I have handled in a while. 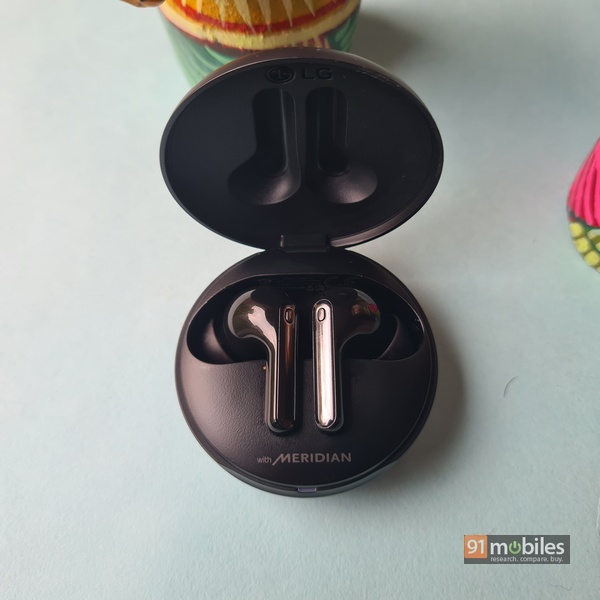 The earbuds themselves have stems extending downwards, and an in-ear design. LG only includes a single pair of replaceable silicone ear tips although the one that came with the earbuds fit my ear perfectly. All basic functionalities are controlled by touch sensors directly on the earbuds. A single tap on either earbud will play/pause the music, a double-tap on the right and left earbud will increase and decrease the volume tracks respectively. A triple-tap will play the next and previous songs, and a long press on either earbud will toggle between the ANC and transparency mode. The problem, as I have with many of these touch-based controls, is that whenever I try to adjust the fit of the earbuds in my ears, I inevitably end up pausing or skipping the tracks. Wear detection allows the earbuds to automatically pause when they are removed while putting them back in the ear resumes what’s playing. 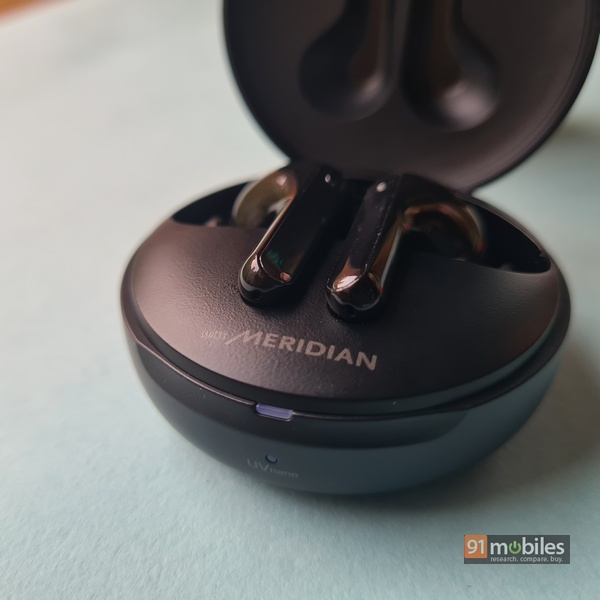 Durability-wise, the TONE FN7 packs in IPX4 certification which should protect against sweat and some light rain. This is something that the Sony WF-1000XM3 lacks but can be found in the Jabra Elite 85t and AirPods Pro. The TONE FN7 stay placed firmly in my ears even when I shook my head violently, but when I took the buds out for a jog I had to adjust the fit every couple of minutes. The weight of the earbuds, at about 5g, is negligible and there were a lot of times I forgot I was wearing them. There was next to no discomfort while wearing them for hours at a stretch, which is something I can’t say for quite a few TWS in the price range. 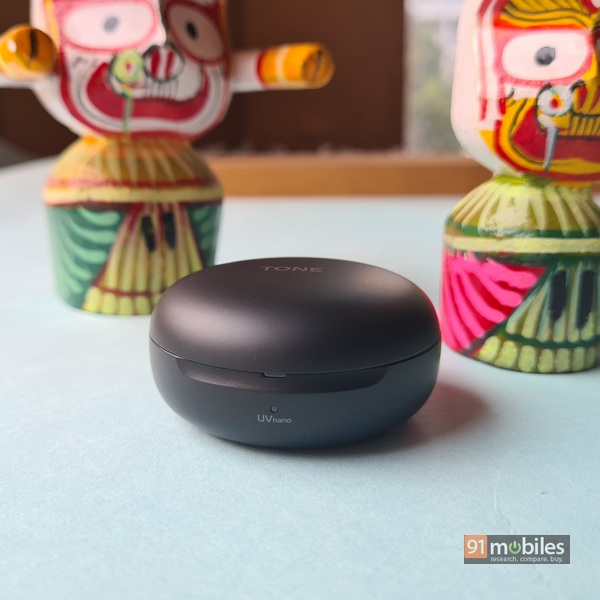 Spending nearly Rs 20,000 on a pair of TWS earbuds will get you some extra features over budget options. As mentioned earlier the TONE FN7 come with ANC enabled and it works fairly well. I was not expecting the same level of ANC one gets to experience with premium headphones like the Sony WH-1000XM4 or the Bose NC700. However, with a proper hermetic seal and the external microphones muting incoming noise, the effect is quite pleasing. I could still faintly hear people around me talking with ANC on but it did nothing to impede my listening experience. The same microphones can also be used to amplify ambient noise with the transparency mode which can be used to quickly hear announcements or be better aware of the surroundings. The AirPods Pro’s transparency mode sounds very much natural while the TONE FN7’s is more artificial, although both accomplish the same tasks. 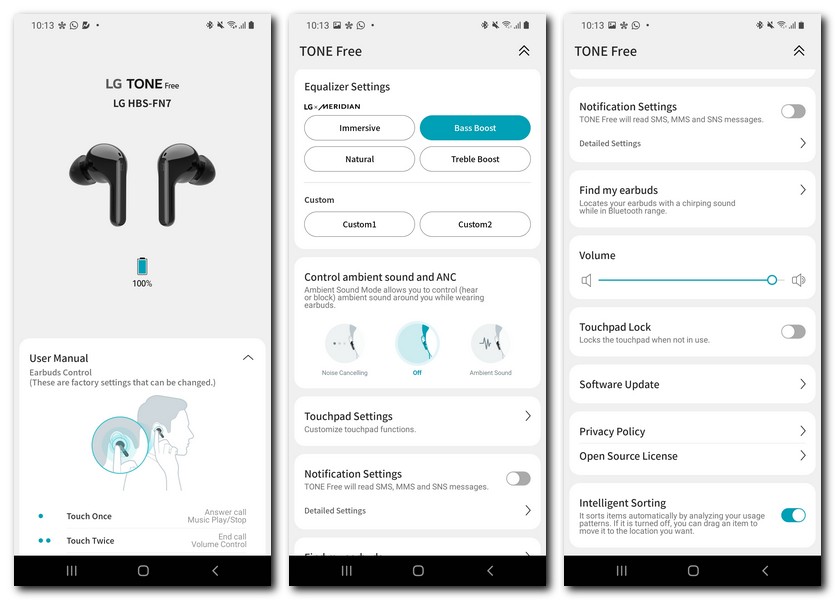 Then you also have a dedicated app for accessing a few more functionalities on the TONE FN7. The TONE Free app has a very user-friendly interface and instantly detects when the TONE FN7 are removed from the case. At the top, you can see the battery percentage of the earbuds and below that are some are the user instructions for the earbuds. Oh, and LG has partnered with Meridian, a British brand known for its high-res audio products dating back as far as 1977. As such the partnership has allowed the company’s technology to seep into the LG TONE FN7 for a more enriching audio experience. In the app, you can find the equalizer options which have been custom made via the collaboration with Meridian. Below are options to toggle between ANC and Ambient Sound modes, a touchpad lock to prevent accidental touches, customisation of the touchpad, and a toggle to read out notifications from your phone that works surprisingly well. There is also a Find my earbuds feature which will play “loud chirping sounds” to locate lost earbuds but good luck hearing those in a crowded room. Lastly, you have software updates, privacy policy, and open source license tabs. 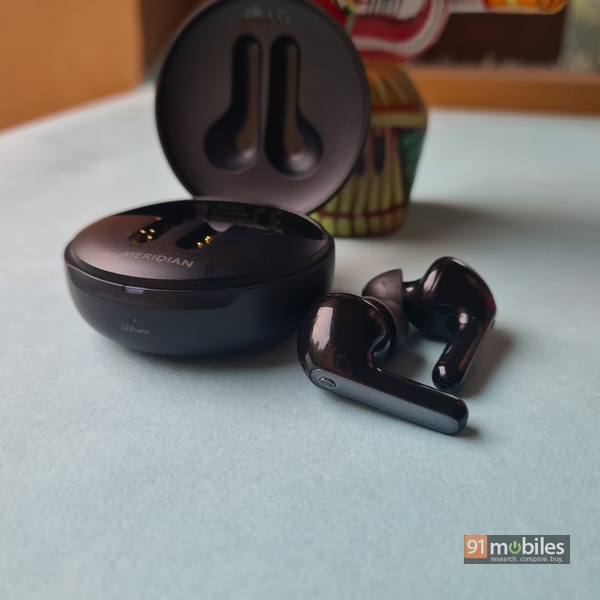 A headlining feature for the TONE FN7 is the UVnano functionality which will disinfect your earbuds in 10 minutes using UV lights. It works only when the case is plugged in for charging. Now I do not have a Compound Microscope at hand to check how good this sterilisation process is, but the company claims a 99.9 percent removal of germs. As per a report by ZDNet, “independent testing conducted in October 2019, UV LED light built into charging case reduces Staphylococcus aureus and Escherichia coli on tip of the earbud closest to the ear canal.”Now there is no mention if it is effective against the Coronavirus responsible for the current pandemic, but I think it would be safe to assume that chances of catching COVID-19 from someone’s earbuds would be relatively low. The fact that the UV cleansing happens only while charging is a bummer since the battery capacity on the TONE FN7 is great and I only plug it in once a week. All-in-all, while the UVnano technology appears to be great and useful but I wouldn’t really use it as a reason for buying the earbuds. 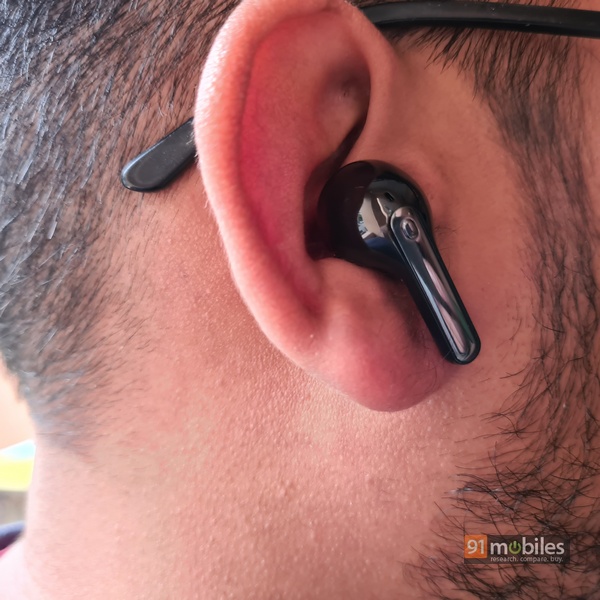 A premium price tag demands premium audio and I have mostly good news in that regard for the TONE FN7. Getting great sound quality on a pair of earbuds with small drivers is a challenging task but the dynamic 6mm drivers do the job well. Combined with Meridian’s audio, the TONE FN7 provides a very gratifying listening experience. There is less focus on bass which will earn the disapproval of Hip-hop enthusiasts but the overall instrument separation and great mids allow for a nice overall sound signature. The immersion in Dream Theater’s The Dance of Eternity is surreal as are the crowds cheering separated from the acoustics on a live version of Metallica’s Nothing Else Matters. Bollywood numbers, pop songs, and EDM music get good vocals that go easy on your ear. The earbuds don’t go too loud but the seal with your ears doesn’t let outside noise penetrate. If I really had to choose, I would go for the WF-1000XM3 simply because of their bassy sound signature as I’m more of a Rap/Hip-Hop connoisseur. However, for everything else, the TONE FN7 goes very much toe-to-toe with the industry heavyweights. The three external mics and the stem extension also make the FN7 pretty good in terms of handling phone calls. Even in a crowded and noisy room, my voice sounded crisp to the caller at the other end, while the external chatter was heavily muted. As far as codecs go, the TONE FN7 support the popular SBC and AAC. There were no issues with connectivity between the two earbuds or with communication to the phone. 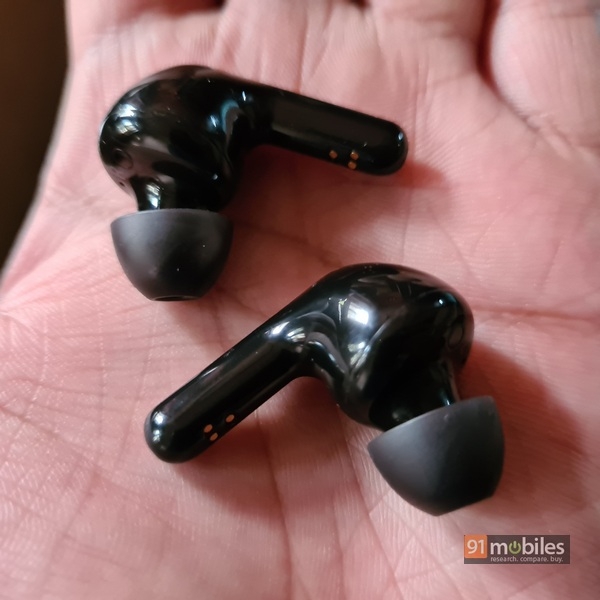 The LG TONE FN7 offers a reasonably good battery experience with its 390mAh cell inside the case while each earbud has 55mAh batteries. LG has claimed a 4-hour battery with ANC enabled on the earbuds and the case providing an extra 10 hours on top. In my usage, where I kept ANC on for most of the time, I was getting about 3-3.5 hours while the case gave about two more full charge cycles. I had to fully juice up the device about once every week and the charging is slightly on the slower side, taking about 150 minutes to go from 0-100 percent. The case also supports Qi wireless charging and wired charging happens via a Type-C port. 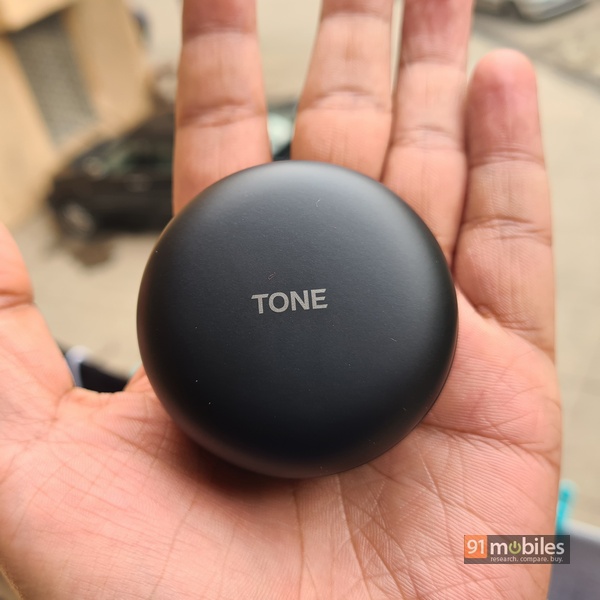 If LG had kept its original price of Rs 29,990 for the TONE FN7, the pair would have been quite hard to recommend. However, at their current price of Rs 18,990, these are very competitive. Apple’s walled garden means that the AirPods Pro’s special features don’t work well with Android phones. The Jabra Elite 85t is a worthwhile choice alongside the Sony WF-1000XM3 for bass-heads and slightly better ANC. For most others, the LG TONE F7’s vibrant sound quality and Meridian audio support will quite likely fulfill your audio fantasies. The UV sterilisation part is an added bonus.