The LG V30+ (and the V30) has been around since the company introduced it at the IFA trade conference in September. As usual, LG India delayed the launch of the phone in our country and the V30+ landed only about a week ago. However, the delay is probably worth it because at Rs 44,990, the V30+ is a great bargain. The pricing puts it squarely in competition with phones like the Nokia 8 (review) and the Mi Mix 2 (review), instead of more expensive flagships like the Google Pixel 2 XL (review) and the Samsung Galaxy S8.

Now, when I’d used the phone at IFA, I was rather impressed. It was launched alongside the Samsung Galaxy Note8 (review) then, and my first impressions of the V30+ were better. Does the LG V30+ continue to keep its charm intact? Or, is it a little too late to the “flagship” party of 2017? Read on to find out.

The best smartphone design of 2017 Yup, I’m convinced that LG has hit the ball out of the park with the LG V30+’s design. 2017 has been characterised by manufacturers trying hard to cut the bezels and make smartphone screens the centre of your attention (the way it is meant to be). And in that regard, the V30+’s design finds the right balance of size, weight, and curves. Here are three reasons why I think the V30+’s design is the best:

The V30+ is almost all glass, held together by a metal frame. Available in two colours — Black and Silver — the V30+ cuts a handsome figure. The phone won’t turn any heads but paired with a suit, it fits just right in. Classy is the word that comes to mind. Quite honestly, this is not something that I’d expect from an LG V series phone because they’ve always had an industrial design language. Oh but don’t worry, the LG V30+ is still pretty sturdy thanks to the IP68 and MIL-STD-810G certification. Although, I am pretty sure the glass is bound to break more easily when compared to the all-metal construction of the LG V20.

Also, the one thing that is distinctly LG about this phone is the fact that the home button-cum-fingerprint scanner is located at the rear. It is actually pretty convenient once you get used to it. Additionally, the V30+ is surprisingly light, and the weight is also distributed evenly across the surface of the phone.

Overall, the LG V30+ — despite incorporating a massive 6-inch display — is the most ergonomic and well-built smartphone of 2017. 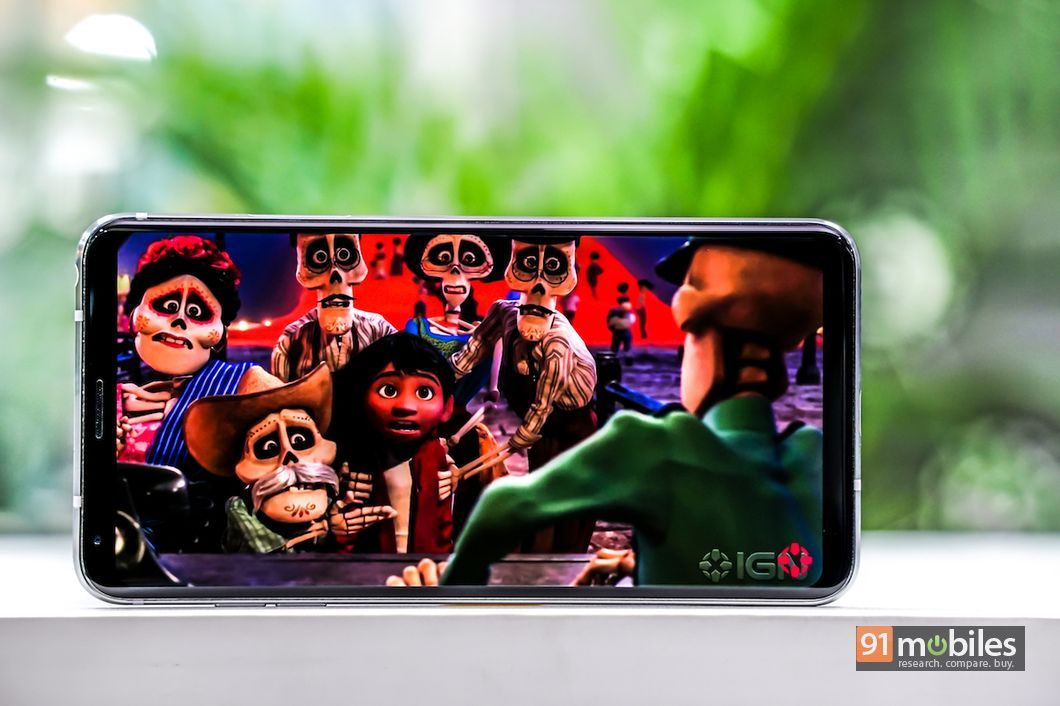 Evidently, 2017 has been slightly controversial for LG’s Plastic OLED (P-OLED) displays. Initial reviews of the V30 by international media, pointed out that the display doesn’t showcase accurate colours and that there is a clear blue tint when seen from an angle. I can attest that the blue colour shift happens even when viewed at a slight angle. However, colour accuracy is not really a problem because LG does give you an option to tweak the display settings. You can choose the Best for Web option to ensure sRGB accuracy. Granted it looks drab, but if you want colour accuracy you have to make that compromise.

All said and done, in real life usage, most people won’t really notice the difference because you get a QHD resolution screen that looks very, very crisp. Furthermore, the fact that you get next to no bezels around the display is great. What’s also great is that you can switch to FHD resolution in case you want to save battery life. LG also gives you the option to force apps of your choice to run in the native 18:9 aspect ratio, and to hide the navigation button to view your content in its entirety. Good job, LG. 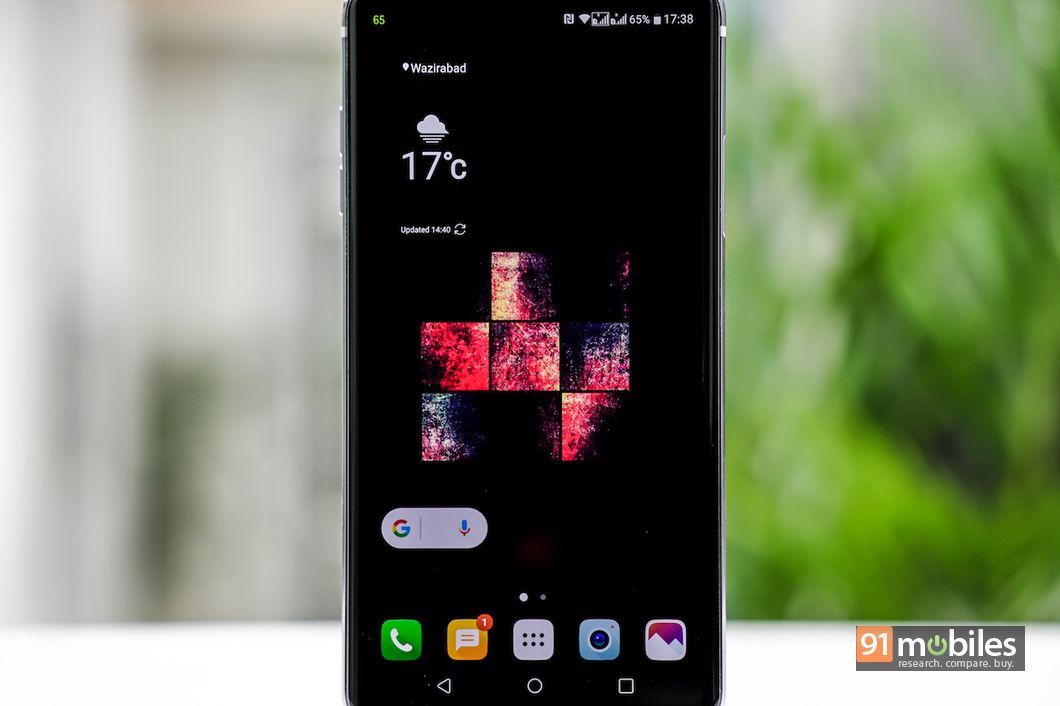 The V30+ runs Android 7.1.2, which is fine but Android 8.0 (Oreo) has been around for a while now and I expected LG’s flagship to run the latest OS. But sweat not, because an Oreo update should be right around the corner. But the bigger problem is LG’s UX 5.0 skin on top of the base OS. Not counting ASUS’ ZenUI, UX 5.0 is the only other branded skin that is riddled with bloatware. The moment you switch no the phone you are greeted by a bevy of first-party LG apps and a few third-party ones too. You can delete the third-party apps thankfully. 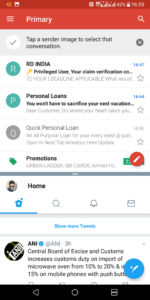 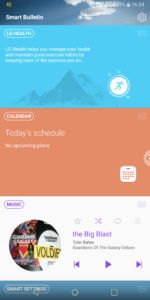 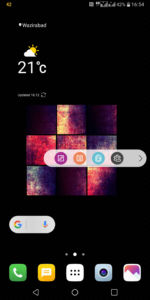 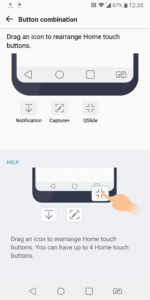 By default, you do not get an app drawer but there’s an option to invoke it in the settings. Despite that, Android on an LG phone doesn’t feel a lot like stock Android and I am not a fan. One respite however, is that LG has engineered the UI over the years to improve the hardware-software performance. To compensate for the lack of a second physical screen on the V30+, LG has included a software tweak in the form of a floating bar emulating the same. You can switch it off because it doesn’t really add much value. 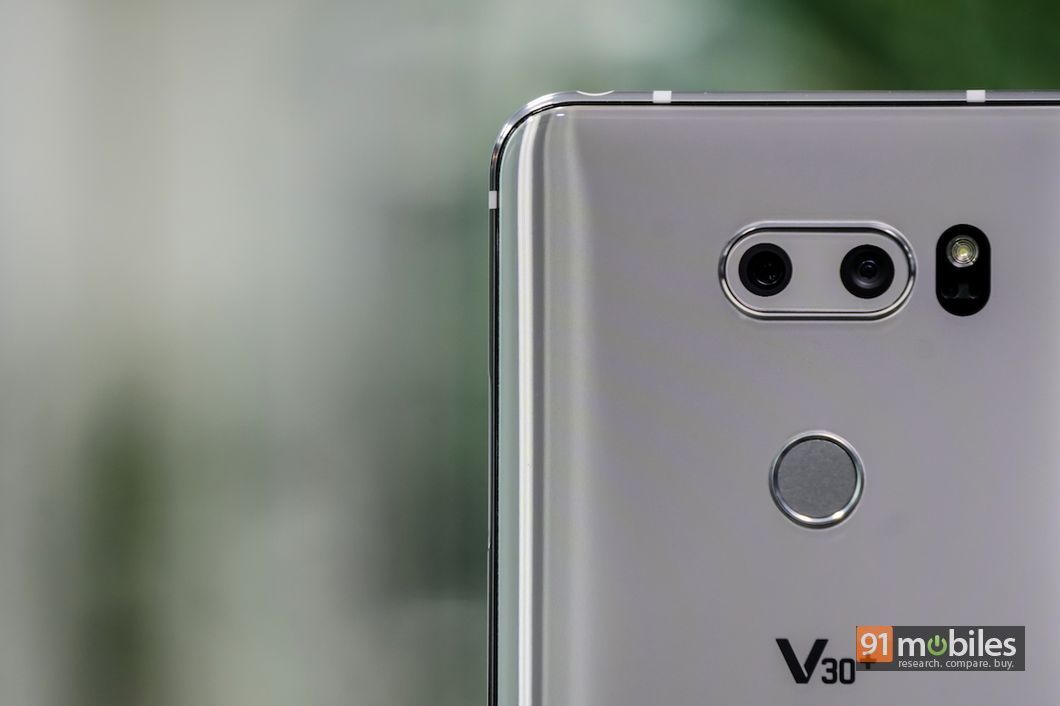 LG has swapped the primary 13MP camera from the G6 for a 16MP unit. When the phone was announced, the entire tech fraternity went into a frenzy about the fact that LG had attached an f/1.6 lens for better low-light photography. In my testing, I noticed that the camera manages to retain a good amount of details in less than ideal light but it is no Google Pixel 2 unfortunately and that is the brutal truth. The second-generation Pixel has just raised a bar a little too high for other brands.

That said, LG has an ace up its sleeve with the secondary 13MP wide-angle camera on the V30+. It adds a lot of perspective. Obviously, the image performance is nowhere close to that of the primary camera but the wider angle is a great alternative. Take a look at the pictures below to judge for yourself.

One of the interesting new mode additions is the Cine Video mode which lets you zoom into any part of the screen once you’ve focussed on it. It is a really cool technique and looks pretty snazzy once you see the recorded footage. Although, I really didn’t find the video stabilisation to be as good as the iPhone X, the Samsung Galaxy S8, or the Google Pixel 2XL. The video recording capabilities of the V30+ are great and you won’t be disappointed with its performance.

There is one major issue with the LG V30+’s cameras though, the 5MP front camera is pretty mediocre. If you like selfies, you might want to stay away from the V30+. Our in-house selfie addict and compulsive obsessive phone-upgrader isn’t buying the V30+ just because it doesn’t have a good selfie camera.

The V30+ uses the Snapdragon 835 SoC coupled with 4 gigs of RAM and 128GB of onboard storage. It is extremely fast and snappy, and I didn’t face any lags whatsoever in my time with the phone. And, the game is a lot, a lot of fun on the V30+ because you get this uninterrupted experience thanks to the nearly bezel-less display. 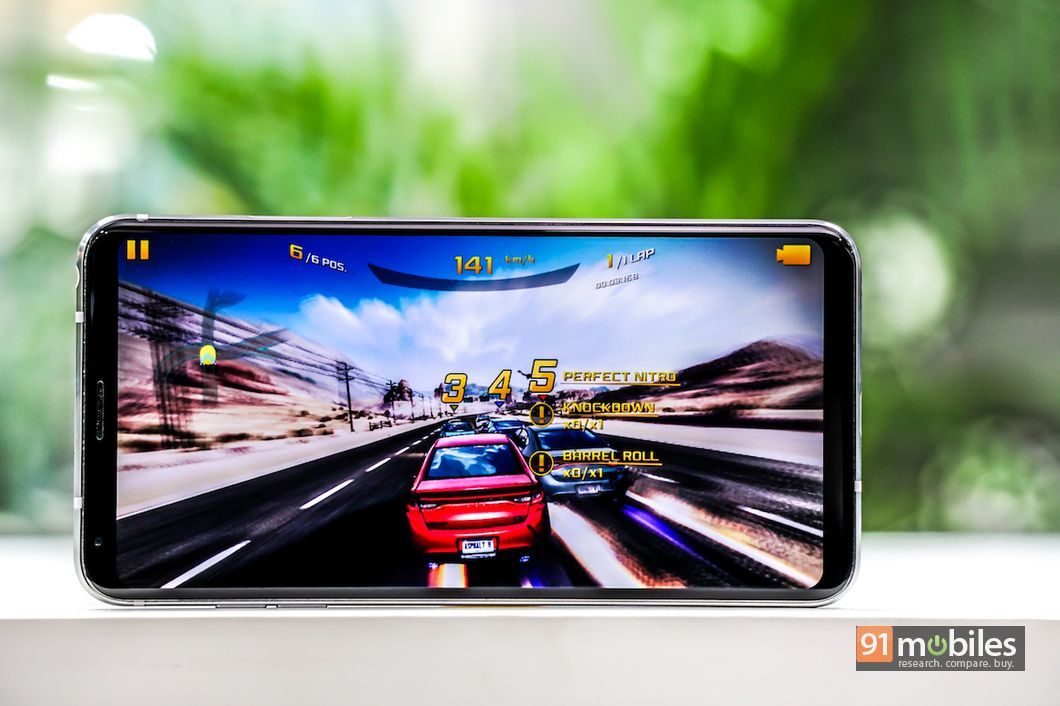 Obviously watching videos on the display is great as well but the single speaker is a bit of a letdown. But, most audio nerds won’t care about that because the V30+ comes with four digital-to-analog converters (DACs) for audio. For the uninitiated, DACs are tiny chips inside your phone that deliver sound through the audio port; a 3.5mm jack in case of the LG V30+. What does this mean for the end user, you get the best audio performance from a smartphone. I directly compared the sound profile of the V30+ with the Cayin N3 and noticed that my Brainwavz HM5 drivers sounded only slightly more detailed from the dedicated DAP. This is definitely a major achievement by any smartphone brand, let alone LG. Although, the high impedance mode doesn’t kick in unless you use a headphone with a rated impedance of 50Hz or higher – like the Brainwavz HM5. Interestingly, my 1More Triple Drivers sounded thin and weak. Unfortunately, you don’t get Bang and Olufsen branded earphones in the Indian retail unit for some odd reason but the replacement earphones bundled in the box don’t sound too bad.

Moving on, the sound quality through the earpiece is pretty good and the phone didn’t face any call drops either. As far as battery life is concerned, I am impressed. The phone easily lasts you at least a day of moderate usage with at least 10 percent pending at the end of the day. In fact, the V30+ lasted 17 hours 48 minutes in our battery test, which is pretty great too.

Yes, only if you are a hardcore Android user with a penchant for tinkering and tweaking. I know most users won’t care about the quad-DAC or even the Cine Video recording mode but for those who do – the LG V30+ delivers and how!

For everyone else, there’s a OnePlus 5T (review) or a Samsung Galaxy S8 or even a Pixel 2 XL waiting for you out there. As far as I am concerned, the LG V30+ is my second favourite Android flagship of 2017.