MSI has significant presence in the high-end gaming laptop segment, and offers options spread across a variety of different price points. I have been quite impressed with the MSI’s GE lineup that has regularly been offering powerful options, and are priced below the competition. The GE66 Raider was announced last year packing some of the best hardware you could get on a portable gaming machine. This was before the introduction of the new RTX 3000 series GPUs into the market and the Ryzen 5000 series that’s giving Intel a run for its money. Even in today’s landscape, the GE66 Raider makes for a very interesting proposition. For a price of Rs 1,94,990, the laptop is heavy on your wallet but on paper, it does offer the full gamut in terms of internals. Here’s a full review of the device to see if it makes sense to splurge on it. 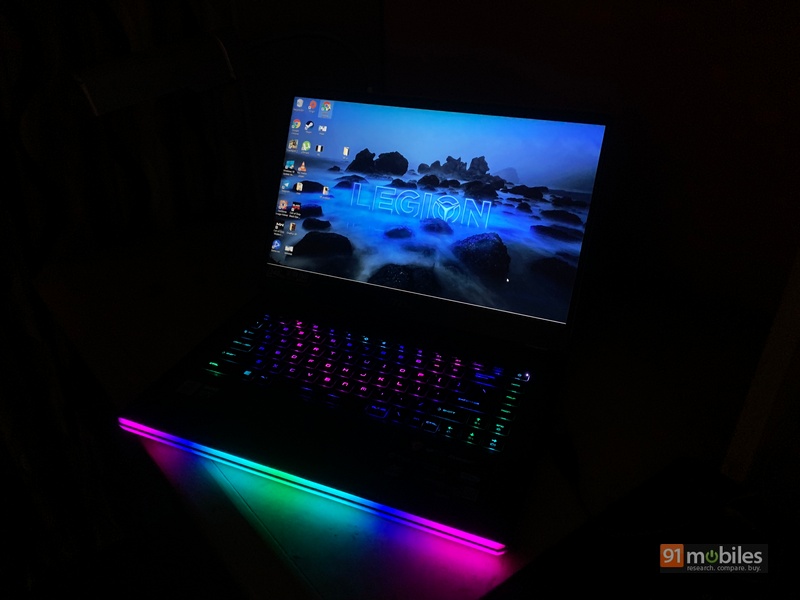 The GS66 Stealth from MSI, launched alongside the GF66, offered a slim chassis while packing in the best internals. However, the GE66 forgoes portability for better thermals. This laptop doesn’t have that beastly exterior akin to the Alienware Area 51m, but you do get a firm hinge design with easy one-handed operability of the lid. The aluminium chassis is extremely well built in terms of durability too. The colour scheme is silverish-grey and just below the palm rest, there is a strip of LED lighting that stretches from one end to the other. You can’t call the laptop flamboyant in terms of design, unlike some of the ROG or Alienware laptops in the market, but it still has the gamer aesthetic. 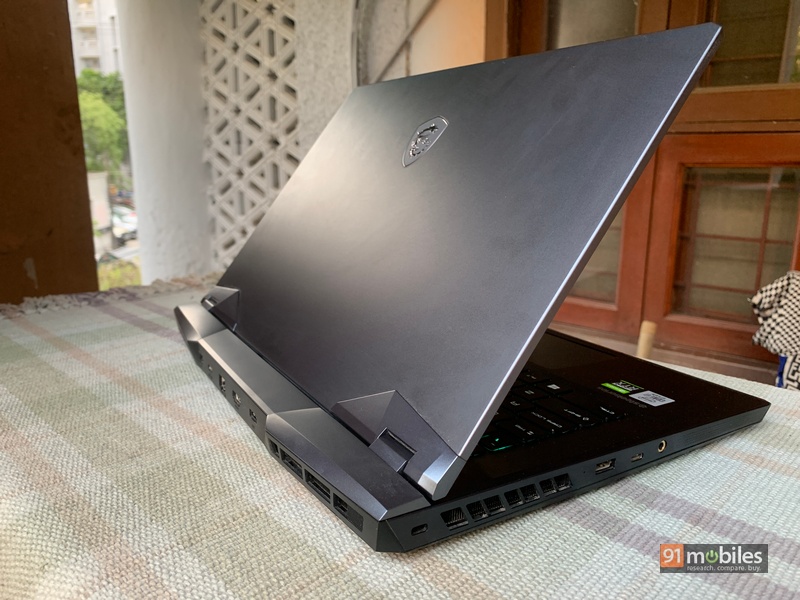 The MSI logo dominates the back. I also like the design at the base where the lid meets the massive heating vents. The gentle slope of the palm rest doesn’t cut into my wrists during prolonged usage. The corners seem slightly jagged on all sides but that hardly matters since most of the usage of the machine will be with it placed on a desk. The speakers are placed at the sides of the chassis just below the thermal outlets. On the bottom is something MSI likes to call “Dragon armor carving” and the hexagonal shapes aligned with one another do remind me of the Alienware M15 R3’s (review) underside. The GE66 is undoubtedly quite heavy and will probably not fit inside your backpack easily. However, I will reiterate that for the internals it offers, having to contend with the slightly excessive weight is a compromise any gamer will be willing to make. As far as ports go, the GE66 Raider has a plethora of them. On the left, there’s a USB-A 3.2 port, a 3.5mm socket, and a USB-C port. On the back, there is a power port, an HDMI 2.0 port, an Ethernet slot, another USB-C port, a Kensington lock, and a Mini-DisplayPort. Finally on the right are two more USB-A 3.2 ports along with an SD card reader. 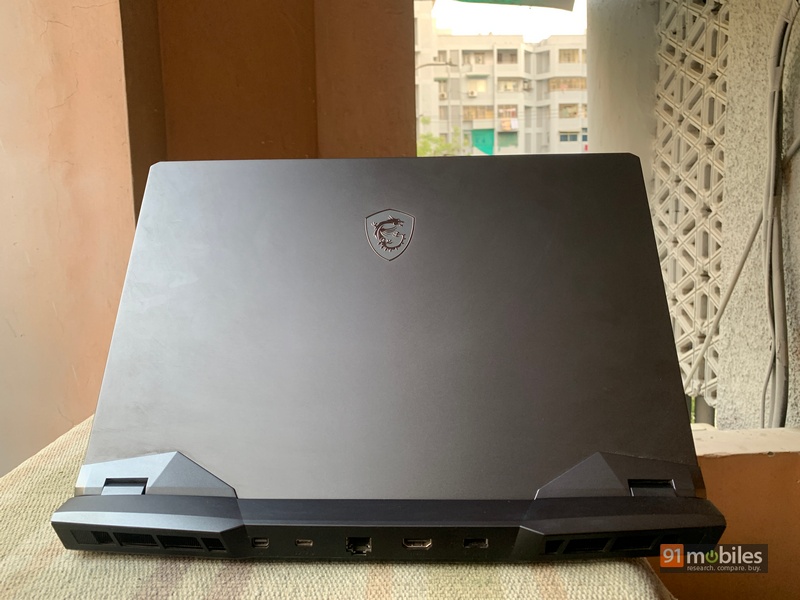 MSI has included a top-notch screen on the GE66 Raider with a refresh rate of 240Hz, although there is a maxed-out 300Hz variant as well. It is a 15.6-inch IPS LCD panel that has FHD (1,920 x 1,080) resolution with ample brightness levels. You could use this laptop under significantly harsh sunlight and still browse through the screen’s contents without too much trouble. During my indoor usage, I never felt the need to set the screen luminosity above 50 percent. The bezels around the display are quite trim with the chin being slightly bigger as it houses the MSI logo. The company is claiming 100 percent coverage of the DCI-P3 colour gamut, which is something that’s quite evident in the vibrancy of several AAA game titles I threw at the machine. While most of it was GPU heavy lifting, I could make out textures to the finest details on Far Cry 5, the greyness in the smoke while shooting in Call of Duty: Black Ops Cold War, and the mesmerising reflections on Cyberpunk 2077 buildings on a puddle of water. It is an excellent display, not only for gaming but also for any other kind of content viewing. 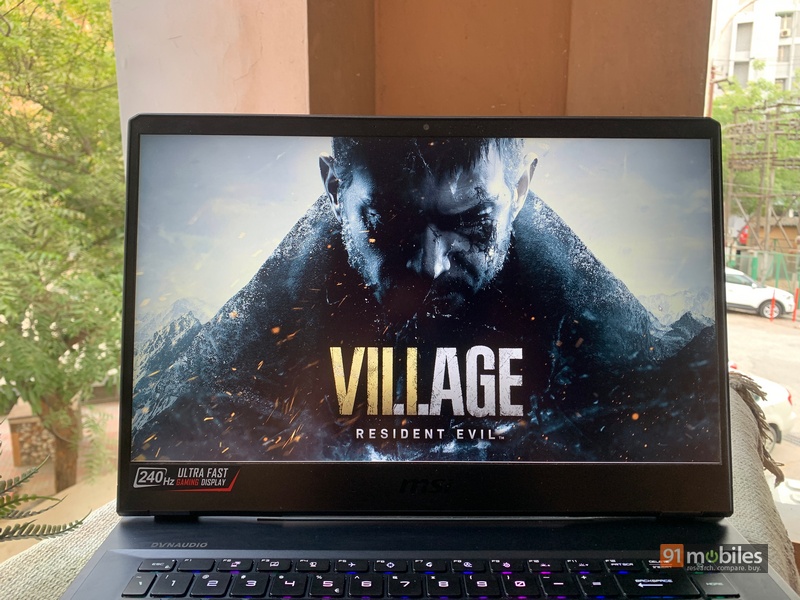 The GE66 does not feature a dedicated numpad, though the usual six rows of keys are extremely spacious. I actually enjoyed typing on it and, by extension, gaming on the device, as the keys don’t feel cramped up. The travel was perfect and the response was quick. However, the placement of the Fn key is something I am not a fan of. It almost always requires a two-handed approach to reach any of the Function keys on the top while pressing the Fn key. With its close proximity with the control key on the right, both of which have the same small size, I almost always mixed up one with the other. Anyone who uses the right control button in gaming is also likely to face such a problem. MSI’s Mystic Lighting provides for a variety of backlighting effects on the keyboard as well as the strip just below the palm rest. The brightness levels are quite consistent which makes it easy to type even in pitch blackness. 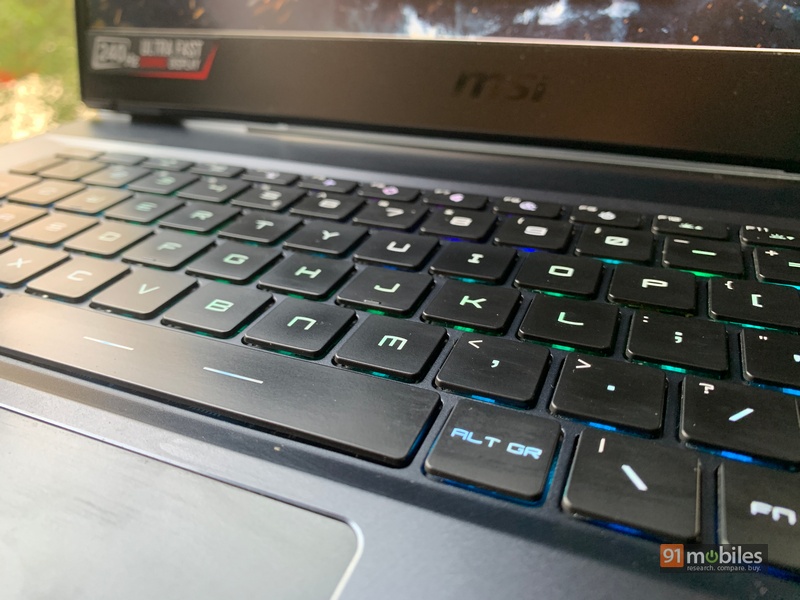 The trackpad has a slightly small area than I would’ve liked, but the touch response is extremely good. The materials used are smooth with my finger usually gliding over the surface. Windows Precision drivers help in multi-touch and offer gestures that work as well as you can expect on a non-macOS device. As with any gaming laptop, most users would probably attach a wired mouse for the best experience, which is what I’ve been doing for the longest time. 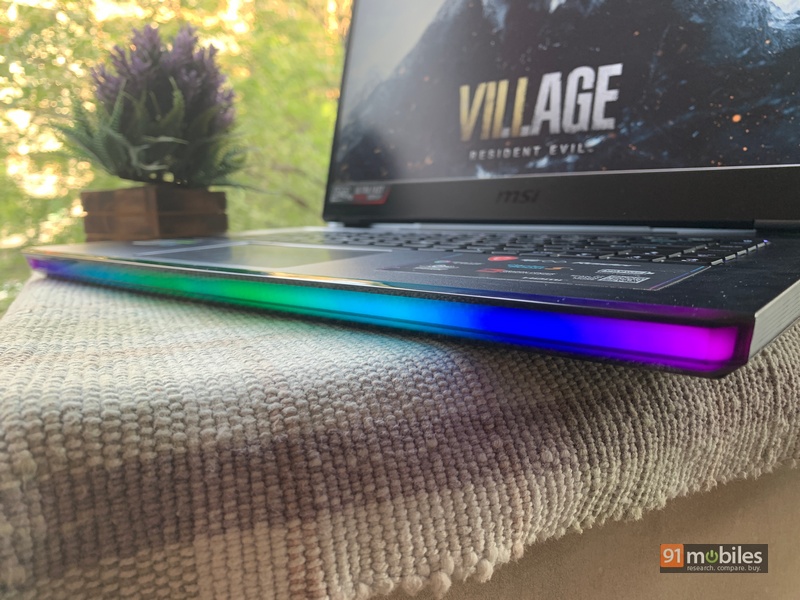 The time for new RTX 3000 series GPUs is here while Intel’s 11th-gen Tiger Lake CPUs are looking to take the fight to the Ryzen 5000 series. The GE76 from MSI, the successor to the GE66, is incidentally making use of the former while the processing is still being handled by the 10th-gen Intel i7 10870H. However, the GE66 is definitely no slouch, since it packs in the slightly lower-powered Intel i7 10750H CPU and the NVIDIA 2070 Super Max-Q GPU. The performance metrics on the GE66 are easily some of the best in the industry. However, my daily usage of the laptop, outside of heavy gaming, does not involve a lot of strenuous tasks. The most I can go with is opening a ton of Chrome tabs (and I mean a lot) while watching something on the media player. While doing this, I also opened a couple of reasonably GPU-intensive titles and faced little to no lag while running at maximum graphics settings. 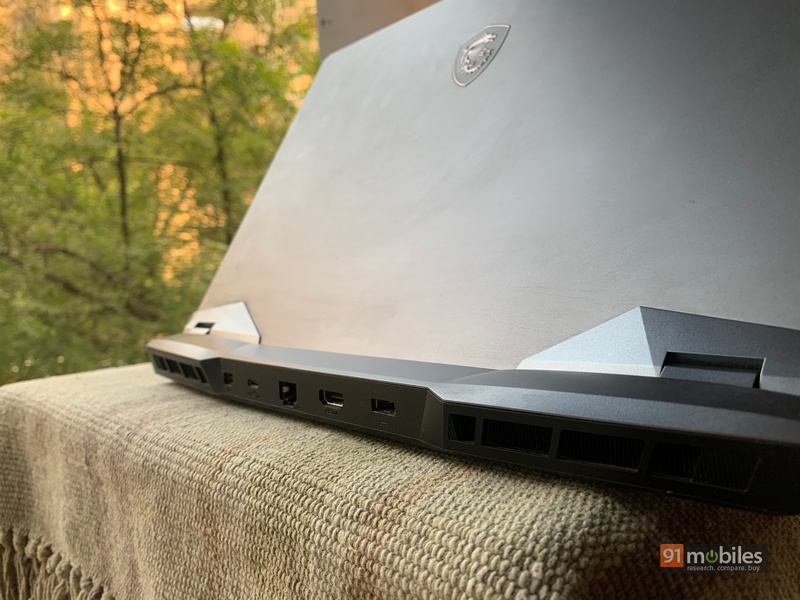 I also have some extremely good benchmark numbers to back up the device’s performance on both the CPU and GPU front. On Geekbench 5, the GE66 gets single-core and multi-core scores of 1,091 and 5,817 which are on point for the i7 10870H. There is 16GB of DDR4 RAM on the device and a 2TB PCIe NVMe which achieves a read and write score of 3,384MB/s and 2,264MB/s respectively. Moving on, Cinebench’s R23 also saw a very high multi-core score of 7,576 while single-core was respectable at 1,166. The machine’s ability as a professional workstation can be measured with PCMark 10’s benchmark in which the GE66 got 5,252, which is quite good in its price range. GPU-wise the device is slightly above the competition with 3DMark’s Time Spy returning a score of 7,807. In comparison, the Alienware M15 R3 was at 7,113. Unigine’s Heaven benchmark yielded a score 3,633, which is to be expected from a 2070 Super Max-Q. The gaming performance is the crux of the matter and boy does this machine really fly. I had earlier mentioned playing games of fairly good graphical intensity alongside several Chrome tabs running in the background. However, the test of a gaming machine does depend a lot on how well it handles AAA titles. On hand, I had Cyberpunk 2077, Shadow of the Tomb Raider, Titanfall 2, Call of Duty Cold War, and Far Cry 5. To preface, I had turned on Ray Tracing wherever I could and maxed out the graphics settings. For Shadow of the Tomb Raider, at Highest Graphics, the device was pulling an ever-impressive 92fps. The M15 R3 was doing just 71fps for the same game. Cyberpunk 2077 was at 32fps with ray tracing on at the Highest graphic setting although playing at a reasonable High setting with ray tracing off put the frame rates at an acceptable 80. Titanfall 2, being a nearly six-year-old title, delivered 120fps while Cold War was also spitting more than 70fps.

Thermals are managed well with fans spinning at full throttle causing a lot of din, so I’d advise you to wear noise-canceling headphones or ones with a good seal while gaming. A lot customisation can be done through MSI’s Dragon Center app on the GE66. It mainly deals with the components wherein you can toggle between different performance modes, fan speeds, and change the Mystic Lighting. The laptop offers the usual wireless connectivity options of Wi-Fi 6 and Bluetooth 5.1 and the audio is managed by two 2W speakers that sound average at best. 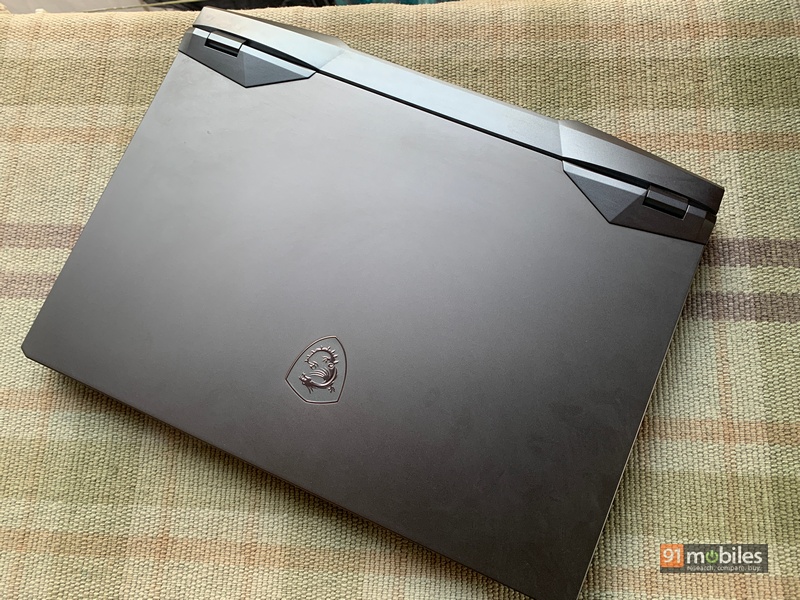 As far as battery goes, the GE66 Raider has a monstrous 99.9Whr pack which is just shy of the 100Whr limit that is allowed on a flight. However, the big battery also has to contend with a very bright screen and a high refresh rate. For normal usage, the laptop gave me just below 5 hours of screen on time, which is not great but not bad either. In any case, you would need to use the behemoth of a 230W charging adapter if you are to game on the device. 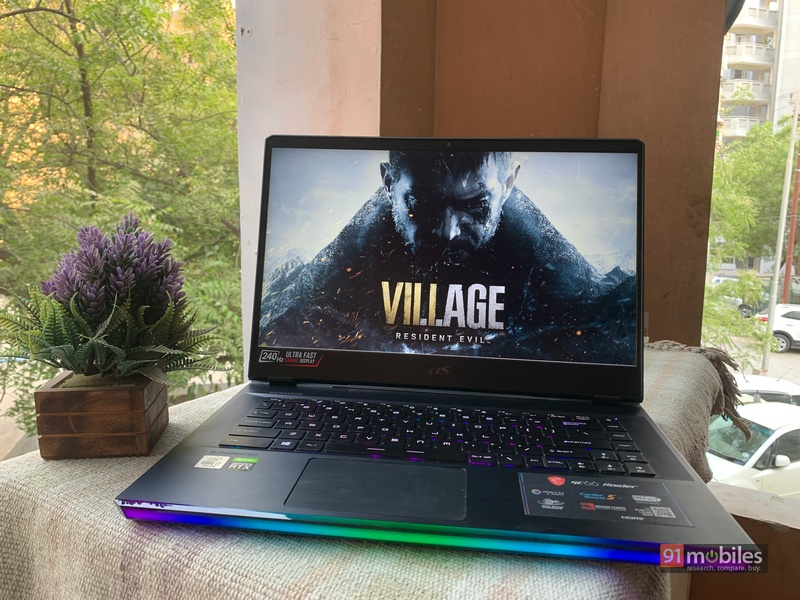 The MSI GE66 Raider does make for a very tempting deal at Rs 1,94,990, which is the current price of the device on Flipkart. In the coming months, the price is bound to fall even more, but the value it can offer via its performance should be there for much longer. The laptop packs in some of the best hardware you can find in the segment right now, although the 2TB version that I have will cost you slightly more. Even so, 1TB of storage should suffice for most requirements, and there is always the option of using external SSDs. Regardless, the 240Hz refresh rate, excellent display, top-notch GPU, extensive keyboard backlighting, and an overall clean design aesthetic make the GE66 Raider a very good deal.