The OnePlus TV Q1 series that was launched late last year marked the smartphone company’s entry into the TV market, with the brand choosing to take the premium route. In India however, the smart TV segment has been dominated by the likes of Xiaomi with its affordable Mi TVs. 10 months later, OnePlus has now introduced two new series of smart TVs that come with affordable price tags as the company looks to grab a bigger piece of the Indian market. The OnePlus TV Y series 32-inch and 43-inch models and the U series 55-inch model were launched last week with prices starting at Rs 12,999. Today, I’m reviewing the high-end OnePlus TV U series 55U1 model.

OnePlus is looking to go back to its roots as a brand that was known for making premium products at affordable prices. The OnePlus TV U1 has been launched at Rs 49,999, which is a much more accessible price point compared to the Q1 series that is available upwards of Rs 69,990. At a sub-Rs 50,000 price point, the OnePlus TV U1 offers a 55-inch panel with 4K UHD resolution, a slim and premium design, 30W speakers, Dolby Vision, and much more.

The OnePlus TV U1 delivers a bright and vibrant 4K display and an extremely attractive design that looks even better than the Q1 series. At this price point, the OnePlus TV U1 is easily one of the best 4K TVs in the market and will deliver a rich visual experience. Invest in a good soundbar and you’re good to go.

The OnePlus TV U1 model comes with a 55-inch screen, which is pretty big and definitely meant for a spacious hall rather than your bedroom. The first thing that strikes you about the TV is its slim profile. With a thickness of just 6.9mm, this is is one of the slimmest TVs that I have ever seen. It looks sleek and the ultra-thin aluminium chassis gives it a very premium finish. You’ll be hard-pressed to find a better-looking TV in this segment. 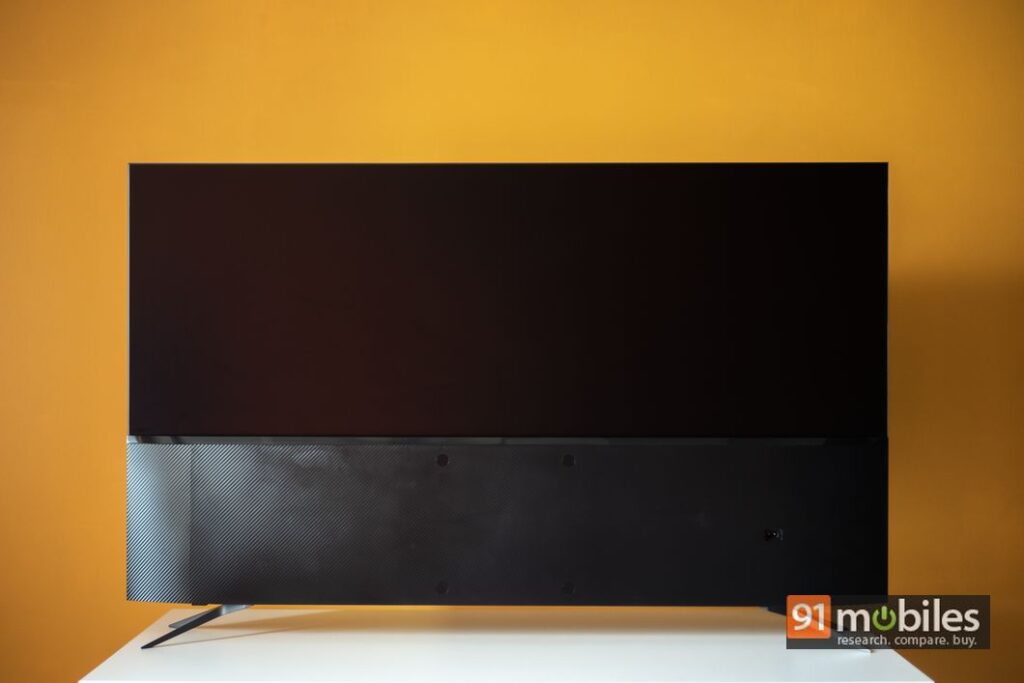 A majority of the back of the OnePlus TV U1 is flat and clean. The company wanted to offer a minimalistic and attractive look for the back as well, even though you won’t be looking at this part of the TV much. You can tell the company has put in a lot of thought in presentation. There is no visible screws on the back. The bottom one-third of the rear has a curved mound with a carbon fibre finish, which is where the hardware, speakers and ports are present. The left side of this bump has a removable cover that hides the ports. You will, of course, have to remove the cover and place it somewhere if you want to use the ports. You get three HDMI ports, one AV input, two USB ports, and an ethernet port. 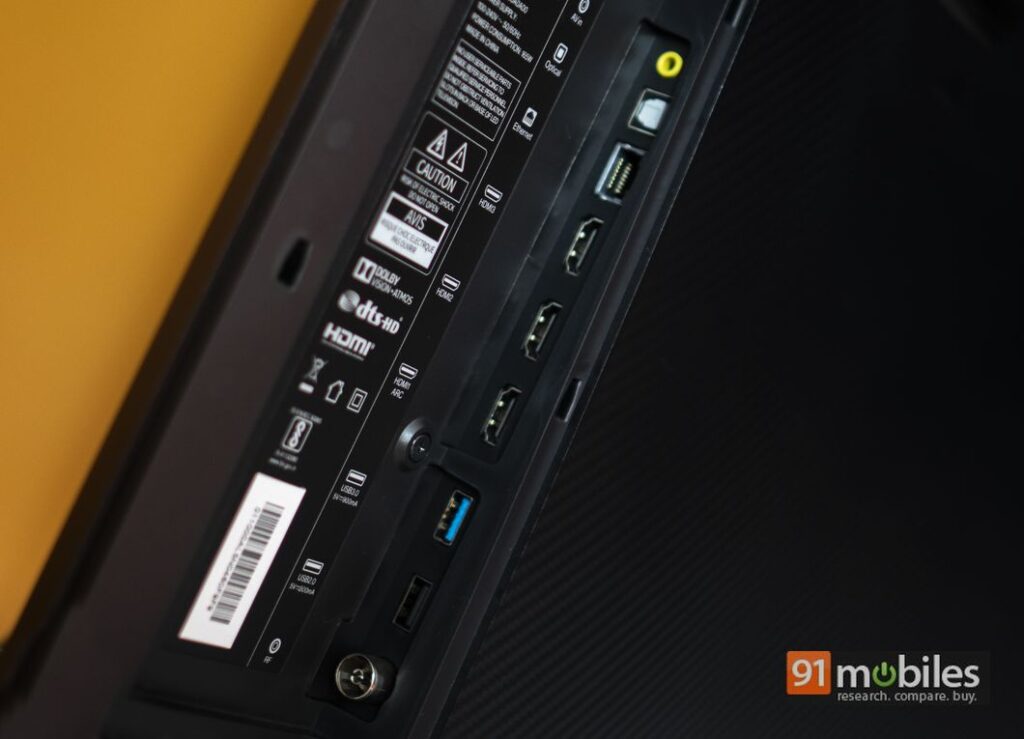 Now, you don’t get a wall mounting kit with the OnePlus TV U1, but you do get a stand with the box. OnePlus says that customers can request for a free wall mount kit at the time of purchase and installation will also be done for free. These are metal stands with the same gunmetal colour and slim profile as the TV’s chassis. While the legs are sharp and slim, they are extremely solid and can balance the 55-inch TV well. 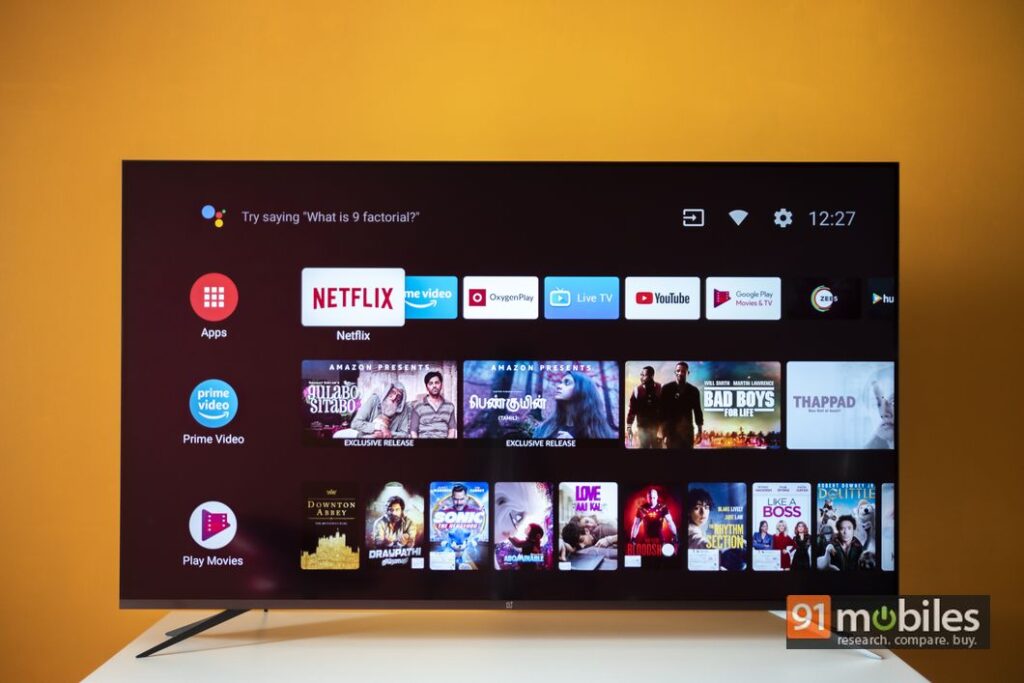 Under Picture settings, you have the option to change the modes from Standard to Vivid, Custom, Film, Cinema Home, Photo and Graphic. There’s an Eye Protection mode as well which tints the display to a warmer shade to soothe the eyes. You can also manually adjust the backlight, contrast, brightness, gamma, sharpness, color, and tint. Moreover, you can also head to Advance Settings to set options like Global Dimming, Noise Reduction, Ultra Smooth Motion, and so on.

As long as you have a good amount of 4K content to watch, you can get the best experience from the OnePlus TV U1. Netflix, for example, has the biggest library of 4K content provided you subscribe to the Rs 799 monthly subscription plan. You’ll see titles that support 4K UHD or Dolby Vision, both of which look absolutely stunning on the OnePlus TV U1. 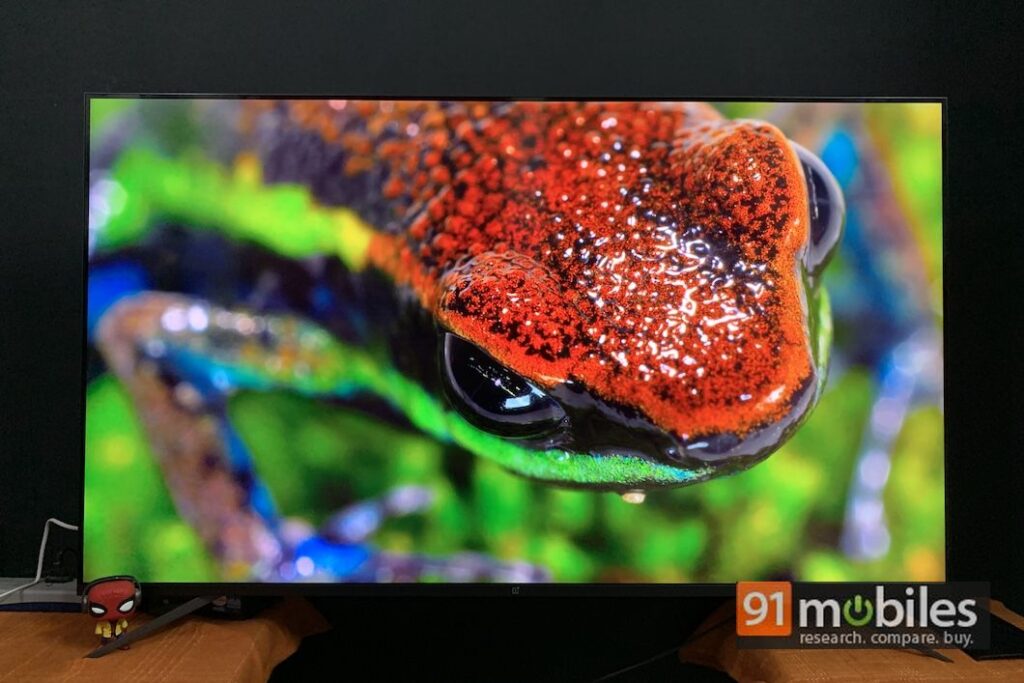 As a must, I checked out Our Planet on Netflix which supports Dolby Vision. The experience was fantastic with excellent sharpness and vibrant colours. Brightness levels are great and so are the viewing angles. For an LED TV, the OnePlus TV U1 also delivers deep blacks, making night scenes look visually stunning in 4K. Note that Dolby Vision content has its own preset, but you can still tweak the brightness, sharpness and so on if you really want to.

Now, a majority of content that you’re going to watch will be in full HD resolution and it will look good for the most part as the Gamma Engine does a pretty good job at upscaling. However, due to the size of the screen, you will occasionally spot lack in sharpness and pixelation. I checked out Jurassic World on Netflix, which was unfortunately not in 4K or Dolby Vision, and Ford v Ferrari on Hotstar in 1080p resolution. Both movies delivered good colour reproduction and brightness levels. Brightly lit scenes where clear enough, but I did notice some pixelation in darker scenes. The picture quality will naturally take a further hit if you’re watching content in 720p or lower resolution and it would be wise to opt for a smaller screen if you don’t have access to 4K content. 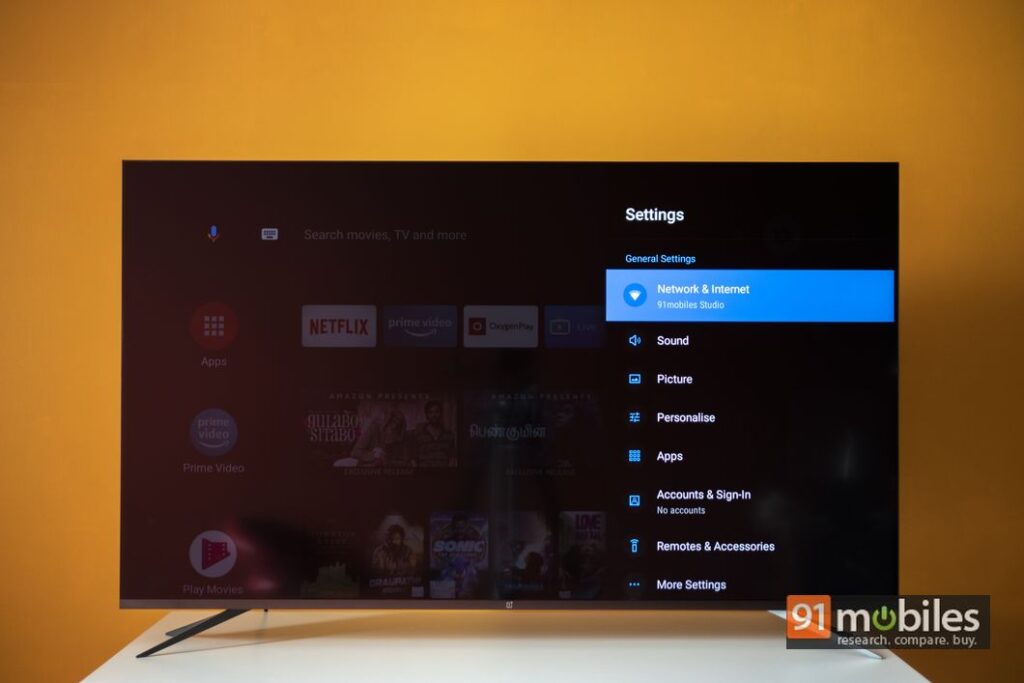 By default, motion estimation, motion compensation or MEMC is set on Medium. The feature bumps up the fps to make motion appear smoother. On Medium setting, the smoothness is noticeable and can make movies and shows feel unnatural. I mostly used MEMC on Low setting, which offered just the right amount of motion smoothness. Higher MEMC usually works better while watching sports.

The 55-inch OnePlus TV U series model comes with four speakers to deliver a 30W output, which is great to see in this price range. The system includes two full-range speakers and two tweeters. These are bottom-firing speakers, although OnePlus says they are rotated 90 degrees to the rear and an added reflective film is able to direct the sound downward in order to provide rich audio. The speakers are also backed by Dolby Audio support and there’s a Bluetooth Stereo mode that lets you use the TV as a speaker for your smartphone. 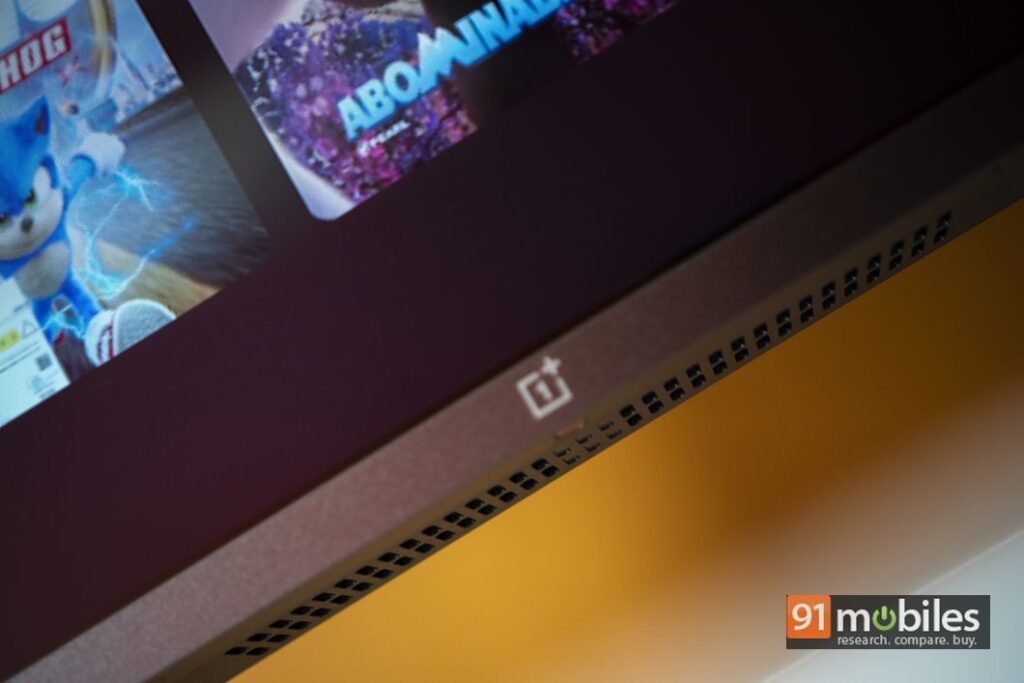 The speakers are supposed to deliver higher levels of bass compared to other speakers in this segment, and that can be felt. Out of the box, the Standard sound preset emphasises lower sound signatures to give a bassy response. It’s a great for action movies like Jurassic Park and Ford v Ferrari. While watching the latter, I could feel the deep roar of the car engines during the races, which really made the experience immersive. However, dialogues tend to lack clarity and can sound a little muffled. You can change the preset to Surround or Clarity depending on the kind of movie or show that you’re streaming. You can also manually adjust the audio settings for even better results. I had no complaints with the loudness of the speakers, but if you’re looking for a rich and balanced surround sound experience, you may want to invest in a good soundbar.

The OnePlus TV U1 runs Android TV 9.0 with a very light OnePlus skin on top. The TV is powered by a quad-core MediaTek chipset paired with 3GB RAM and 16GB internal storage. Apps like Netflix, Prime Video, Hotstar, YouTube, Zee5, Google Play Movies, Eros Now and Hungama Play come preloaded. You can sign in using you Google account to access the Play Store from where you can download more OTT services and other third-party apps. 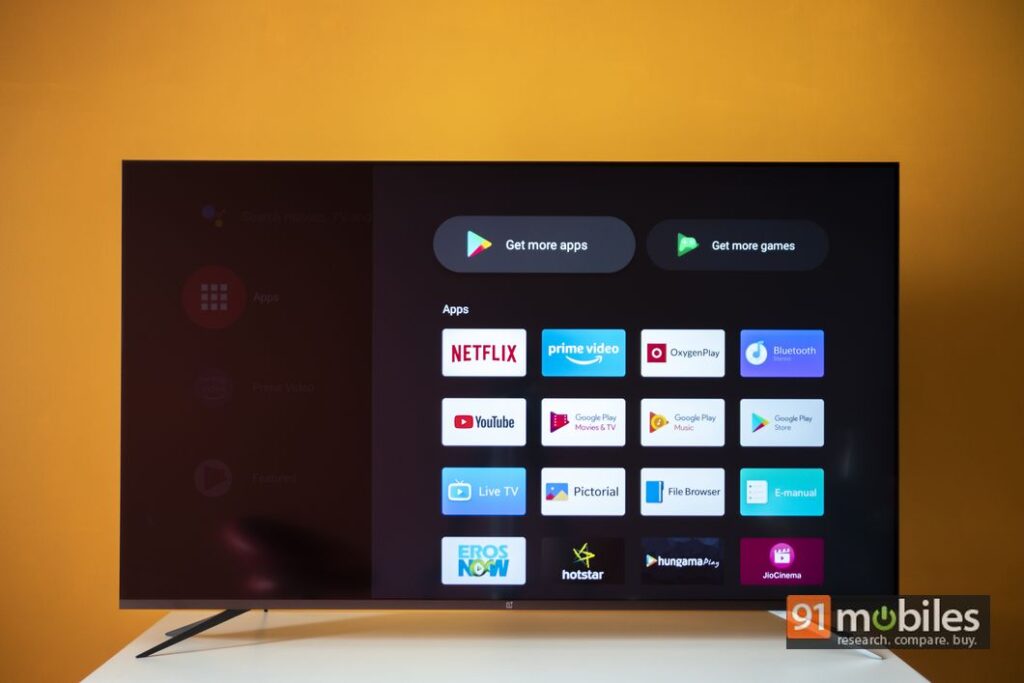 The general user interface looks clean and is easy enough to use. I didn’t see any lags or stutters while browsing through the UI. However, my in-app experience was quite uneven. Netflix worked smoothly for me, but I did find the Prime Video app to be quite laggy at times. For example, while watching a show on Prime Video, I tried to check the names of the actors only to find the whole process slow.

The TV comes with Oxygen Play, which curates content from various streaming services, allowing you to easily browse through them. OnePlus Connect is another feature offered by the brand. It’s an app that can be downloaded on your phone from the Google Play Store or Apple App Store. The app lets you use the phone as a remote to control the TV. It works quite seamlessly, allowing you to control playback and switch between apps via your phone.

Connectivity options also include Wi-Fi, Bluetooth 5.0, and Chromecast built-in. During the review period, the TV never showed issues with Wi-Fi connectivity, and was consistent and reliable. You can connect wireless headphones to the TV and the built-in Chromecast lets you cast content from your phone to the big screen.

The OnePlus TV U1 remote comes with a new design compared to the remote that shipped with the Q1 series. Simply put, it is much better and actually usable. It’s longer and doesn’t look like a ripoff of the Apple TV remote, which is good. There’s a D-pad on the top for navigation and dedicated buttons for Netflix, Prime Video, and Google Assistant. The volume buttons have been moved to the front of the remote instead of the side as seen on OnePlus TV Q1 series remote. Tapping the OnePlus button lets you switch on the TV and long pressing it will let you choose between standby, switching it off completely or resetting it. Unlike the previous remote that could be recharged over a Type-C port, the new remote requires AAA batteries. 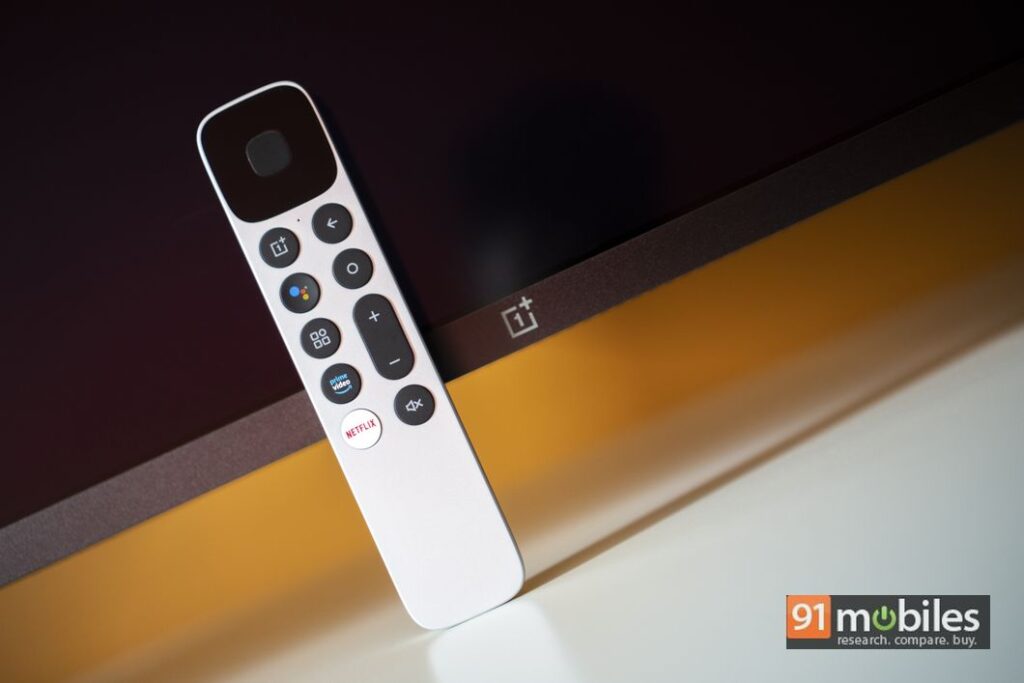 The OnePlus TV U1 has all the makings of a great 4K TV under Rs 50,000. The company has managed to deliver on all fronts, from a sleek and minimalistic design to an attractive display. The OnePlus TV U1 offers one of the best LED displays in its segment with plenty of features such as Dolby Vision support, HDR10+ and Gamma Engine to give it an edge over rival 4K TVs from Xiaomi, VU, and some others, if you’re willing to spend a little extra.

You also get a clean software experience with most popular OTT platforms out of the box, which means you won’t need an additional streaming player. The speakers are fine, but if you’re spending Rs 50,000 on a 4K TV, you should stretch your budget a little more and get a better sounding soundbar.

The OnePlus TV U1 holds up really well against the likes of the Mi TV 4X 55 and the VU Premium Android TV. These TVs are available at lower prices compared to the OnePlus TV U1 and are good 4K options if you’re on a tight budget. You also get some good options from TCL under 50K that are worth checking out as well such as the TCL 55C715 and 55P8E models. Overall though, I feel the OnePlus TV delivers a better picture quality and a decent set of speakers, making it an option you can’t ignore if you’re looking to add a capable, big-screen TV to your home.