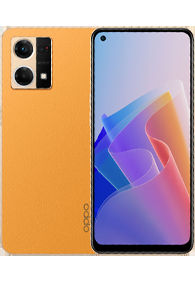 OPPO has a penchant for making stylish Android phones and the company’s latest is no different. Dubbed the OPPO F21 Pro, the smartphone is the newest premium mid-ranger from the company that hopes to solidify the brand’s foothold in the Indian market. As a matter of fact, OPPO has revealed two versions of the F21 Pro – a 4G and a 5G model – to further entice buyers looking for a new handset. I have with me the 4G variant of the phone, which is backed by Qualcomm’s Snapdragon 680 mobile platform, a staple in phones under Rs 15K these days. Needless to say, the handset is competing in a hotly-contested segment so, let’s take a closer look at the phone and see if it is worth the Rs 22,999 you’ll spend on it. 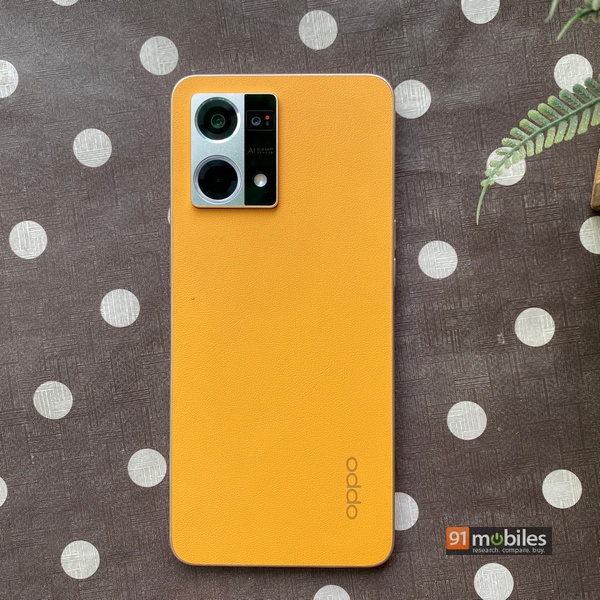 The OPPO F21 Pro does excel in a few departments and the device stands out thanks to its good-looking design that imparts a velvety in-hand feel. The handset’s cameras perform well in daylight conditions too, and the smartphone boots Android 12 out-of-the-box. However, if you require a lot of processing juice, it might be best to look elsewhere. 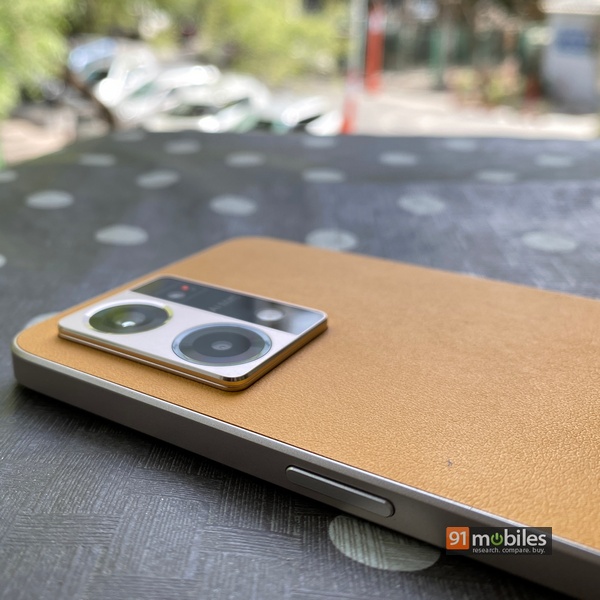 The OPPO F21 Pro looks unlike anything else on the market. I say this because, unlike most phones, the handset foregoes a glittery, shimmery back in lieu of a leatherback design that screams posh any which way you look at it – especially in the Sunset Orange colourway sent to me for review. Needless to say, the OPPO F21 Pro feels extremely unique to the touch and the device is discerningly more premium than most, if not all of its competitors. That’s not all, as the finish doesn’t attract any fingerprint marks or smudges either. And, at just 7.5mm, the F21 Pro is among the sleekest device in its segment, only rivalled by Vivo’s V series of smartphones.

While all that’s good and dandy, I can’t get behind the company’s decision to omit a stereo speaker setup with the phone, especially given its pricing. Now, to the brand’s credit, the device does ship with a 3.5mm headphone jack which is flanked by a USB Type-C port. What’s more, the phone’s mono speaker gets adequately loud for watching movies on the fly too. Be that as it may, a dual speaker array would’ve undoubtedly levelled up a user’s media consumption experience. On the bright side, OPPO has furnished the phone with an Orbit light which envelopes the handset’s MicroLens sensor and glows to illuminate the subject or to alert users of incoming notifications. Folks at OPPO deserve a pat on the back for bringing a phone with a refreshing design that’s layered with some unique elements to the mid-range segment. 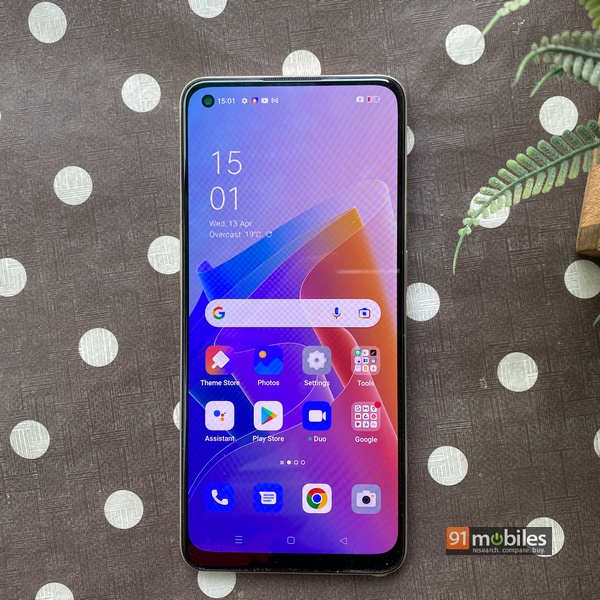 Display-wise the OPPO F21 Pro ships with a high-quality 6.4-inch, FHD+, AMOLED panel that refreshes at 90Hz. The screen features a tiny punch-hole notch towards the top left-hand side which blends in quite effortlessly too. That’s not all, as the display gets plenty bright and offers a peak luminescence of about 800nits, making the screen fairly legible, even in sunny conditions. Now, per the brand, the smartphone can relay HDR10 content and the device supports WideVine L1 certification too. However, try as I might, I couldn’t download the Netflix app on the phone. That’s quite surprising, given how I could seamlessly download apps of other OTT services like Hotstar and Amazon Prime on the phone. I did reach out to the brand and I’ll update the review once I have any more insights to share. Additionally, the phone’s 90Hz refresh rate rarely misses a beat and the display renders buttery smooth animations, provided you’re not taxing the device with a resource-hungry task. 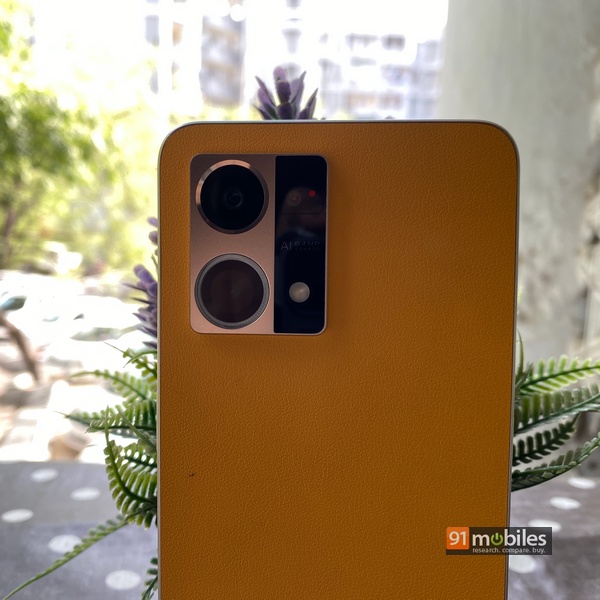 In terms of cameras, the OPPO F21 Pro offers three sensors, each with different functionalities. To wit, the device ships with a standard wide-angle 64MP primary shooter with f/1.7 aperture, a 2MP microlens, and a 2MP monochrome sensor. Coming to the quality of the photos, the handset’s main camera yields decent-looking shots that offer ample sharpness, albeit appear a touch oversaturated. The dynamic range in the shots was to my liking as well, and the sensor managed to encompass the different shades of blues in the evening sky effortlessly. There is even an ExtraHD mode, which by means of OPPO’s sub-pixel interpolation technique, scales an image to a 108MP resolution shot, giving buyers more flexibility when editing their photos.

That’s not to say that the unit is perfect, as I would’ve liked to see better exposure control in the snaps. Furthermore, the handset crushes the shadows a bit too, so you’ll be hard-pressed to find a lot of detail near the darker areas of a composition. Regardless, the OPPO F21 Pro is more than adept at clicking photos and can be a solid point-and-shoot camera phone, at least during the day. 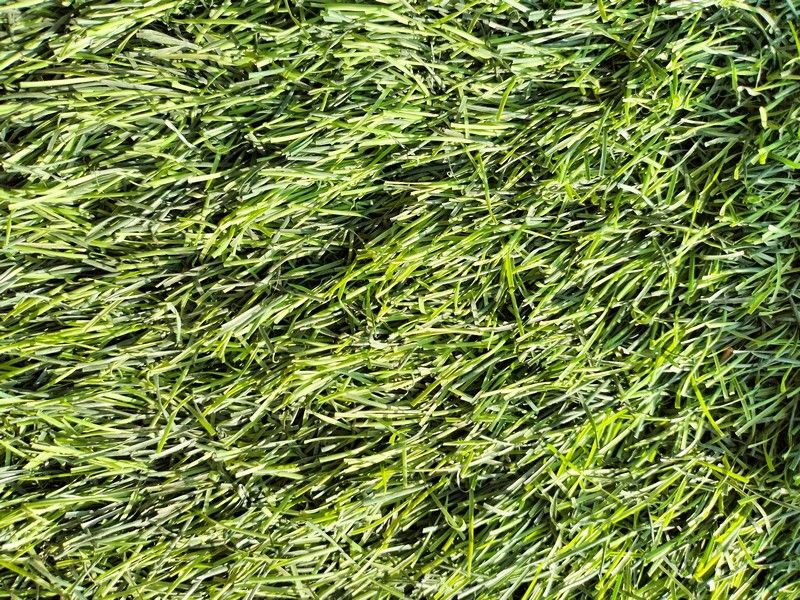 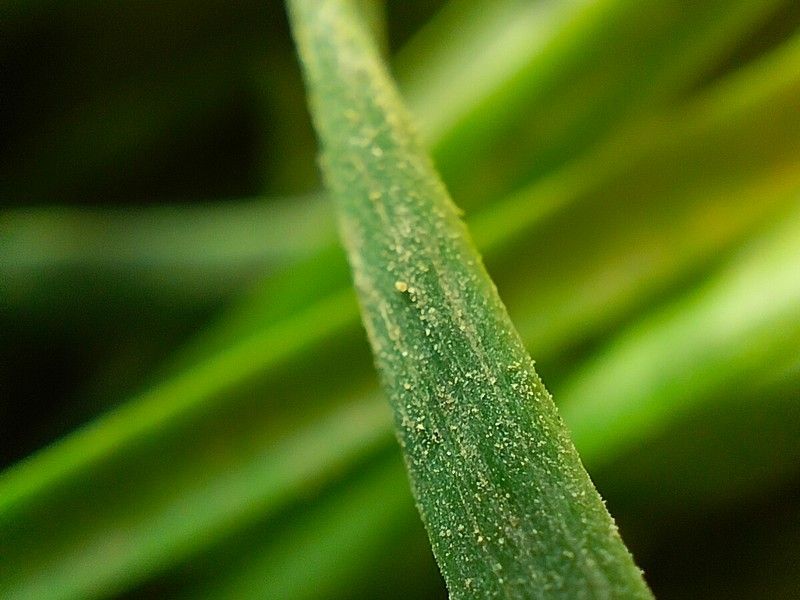 Unfortunately, the smartphone doesn’t ship with an ultra-wide sensor. Instead, you’ll get a microlens with the phone which can only be described as a standard macro lens on steroids. The sensor allows you to zoom into the tiniest of objects and click creative, otherworldly photos – I’m talking zooming in up to 30x on a grain of rice. Now, as innovative as the sensor is, it’s not without its faults. For one, taking any photo with the sensor requires incredibly stable hands as the frame shifts a lot, especially at high magnification levels. Secondly, getting a good closeup requires far more lighting than your average macro sensor. Now, OPPO has furnished the phone with a ring light, however, the unit isn’t bright enough and struggles to illuminate the subjects properly. Moving on, the smartphone also ships with a monochrome sensor which can be used to take B&W portrait shots. That said, the effect can be replicated quite easily by means of an Instagram filter. Rest assured, the OPPO F21 Pro’s auxiliary cameras leave something to be desired. Moving on, the smartphone’s low-light capabilities are a bit of a mixed bag too. On one hand, the smartphone can output photos with good details and realistic colours, especially if there’s some light to go by. However, the sensor tends to oversharpen the subjects in the frame when there’s little to no light around. Furthermore, even with the night mode enabled, I noticed a lot of noise seeped into the composition. As for selfies, the handset’s 32MP Sony IMX709 sensor can net some good-looking self-portraits, thanks in part to the smartphone’s clever AI algorithms. That said, I wish the unit wouldn’t oversharpen the features around a user’s face. 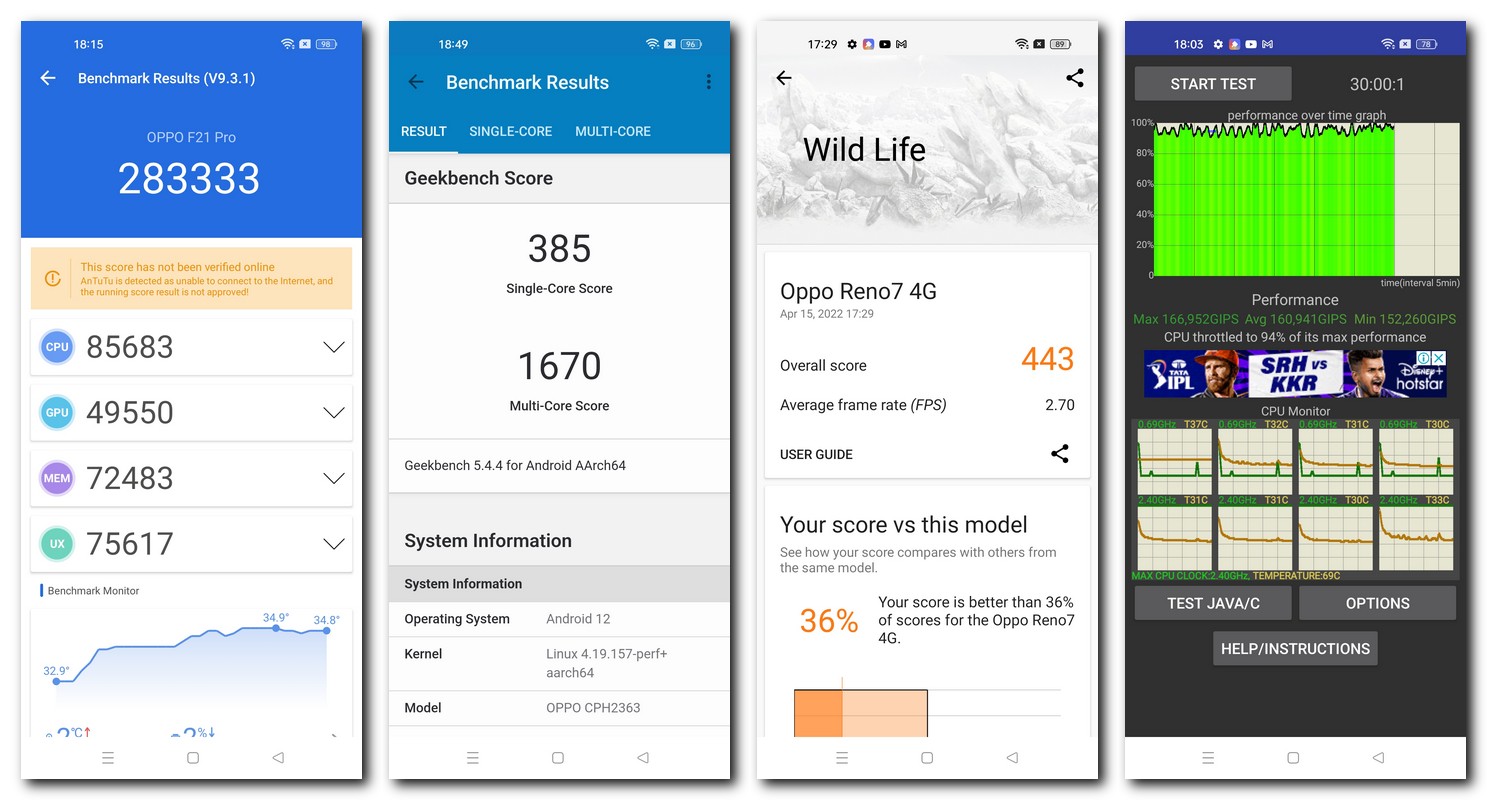 The OPPO F21 Pro runs on the Qualcomm Snapdragon 680 platform which, as prefaced previously, can be found powering phones priced under Rs 15K. Understandably, the handset isn’t the quickest device in its price segment. For instance, in Antutu V9.3 synthetic benchmark, the device outputted a modest score of just 283,333 points. Similarly, the handset yielded 1,670 points in Geekbench 5’s multi-core test, which falls a bit shy of the scores from competing devices too. As for gaming, the phone maxes out at Balanced graphics in BGMI, and buyers looking to get at least 30FPS on the set will have to tone down the graphics preset to the “Smooth” option. That said, the device is more than capable of handling the user’s day-to-day workload, including juggling a handful of apps in memory, as well as browsing the web or using the phone to watch movies/TV shows or clicking a truckload of photos. It also helps that the OPPO F21 Pro ships with oodles of RAM, with the top-end variant offering 8GB of LPDDR4X memory and up to 128GB of internal storage. 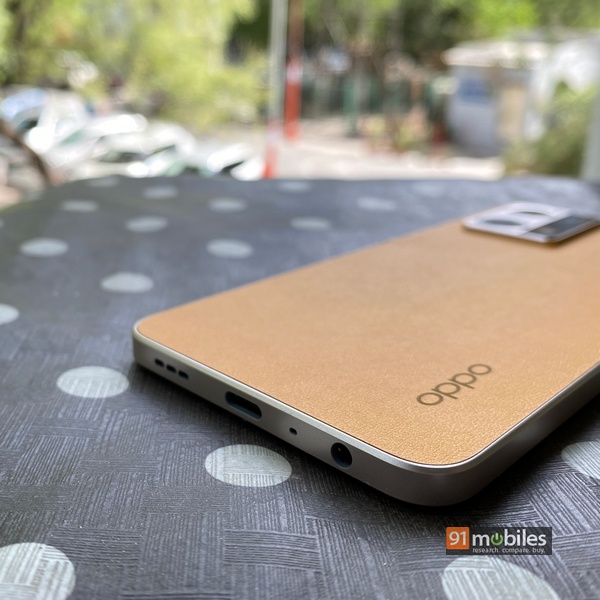 As I had mentioned earlier, the OPPO F21 Pro features a single bottom-firing speaker that can get pretty loud, although the phone would’ve benefitted immensely from a stereo speaker setup. Thankfully, the device ships with a headphone jack that will surely appeal to budding audiophiles. For biometric authentication, the phone does have an in-display optical scanner with a fairly straightforward enrollment process and snappy response. I should also add that I didn’t face any connectivity issues with the phone and the unit delivered 4G LTE services to the palm of my hands effortlessly.

Software-wise, the phone runs on OPPO’s proprietary ColorOS 12 skin which is based on Android 12. Now, I have talked about the interface in detail in my OPPO Reno7 Pro review so do check it out if you want more insights on the firmware. But, to cut a long story short, I am a big fan of the custom skin, primarily because the utility offers a ton of customisation features. However, I do have my reservations about the amount of bloatware that comes bundled with the phone. Thankfully, the custom skin does have some redeeming qualities, including support for Air Gestures which allows users to answer calls or browse a social media app without touching the phone. There’s also an in-build Screen Translator which has support for 105 languages. 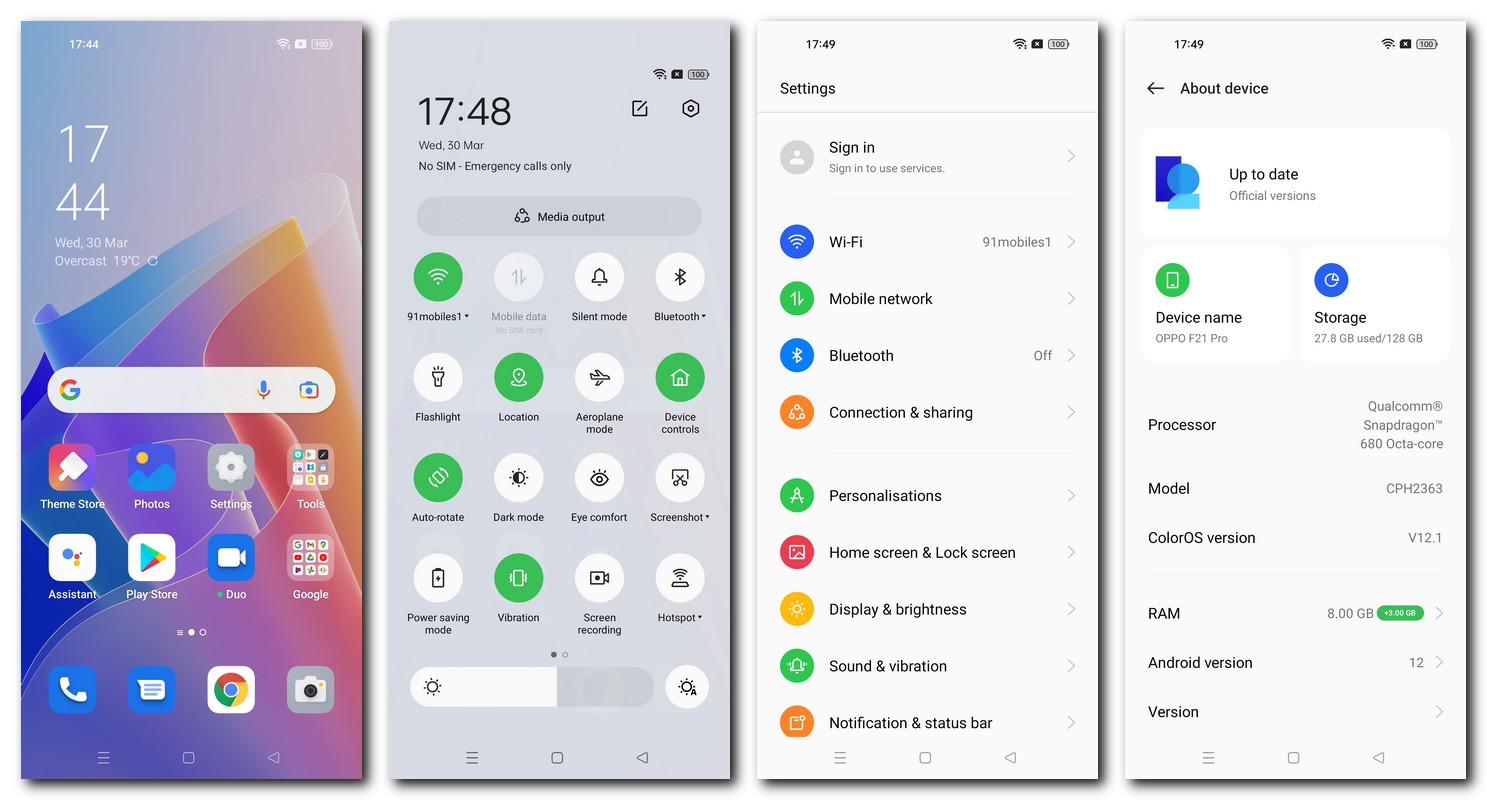 The OPPO F21 Pro ships with a 4,500mAh cell which might not seem like much at first, however, the unit saw me through the end of a heavy work day quite easily. I got about 6 hours of screen on time with the phone, although your mileage could vary if you tend to game a lot on your devices. Thankfully, the phone ships with a 33W charger that can juice up the device in about 90 minutes. 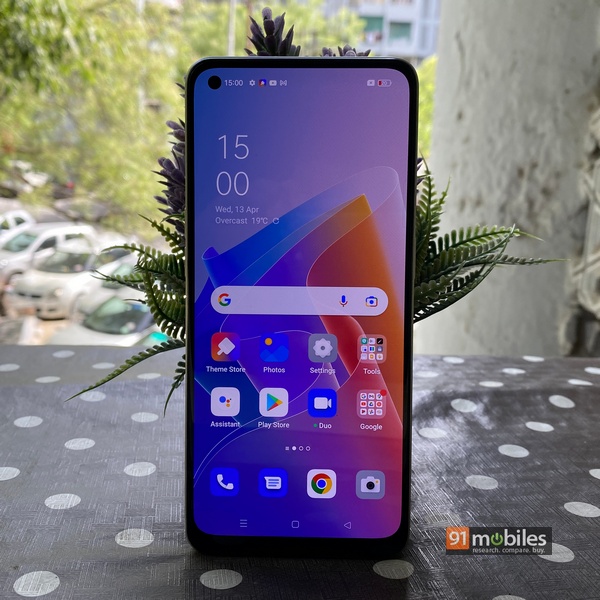 I won’t beat around the bush at all – the OPPO F21 Pro is a lot of things but a performance champ it is not. That said, if you’re in the market for a stylish phone with a unique design then you’ll find plenty to like about OPPO’s latest offering. It also helps that the device boots Android 12, offers a solid battery backup and clicks high-quality photos with its main sensor. Correspondingly, if you can get by with the phone’s Snapdragon 680 SoC, the OPPO F21 Pro is a decent buy. However, if you are a performance fiend, you will be better off with devices like the Realme 9 SE 5G (review), which cost less albeit are better suited for demanding tasks like gaming.