There has been an influx of Realme phones in the month of March, and the former OPPO sub-brand recently unveiled a new entry for its signature number series. Dubbed the Realme 9 5G Speed Edition, the handset comes toting top-notch hardware, making it among the more powerful Android phones in the segment. To wit, not only does the phone offer a 144Hz display – which is the first of its kind in the budget space – but it is also backed by Qualcomm’s Snapdragon 778 5G SoC. Priced at Rs 19,999, the Realme 9 5G SE  competes directly with a number of devices in the ever-crowded affordable smartphone segment. But, does it have what it takes to sway buyers over to its doorsteps? Let’s find out in this review. 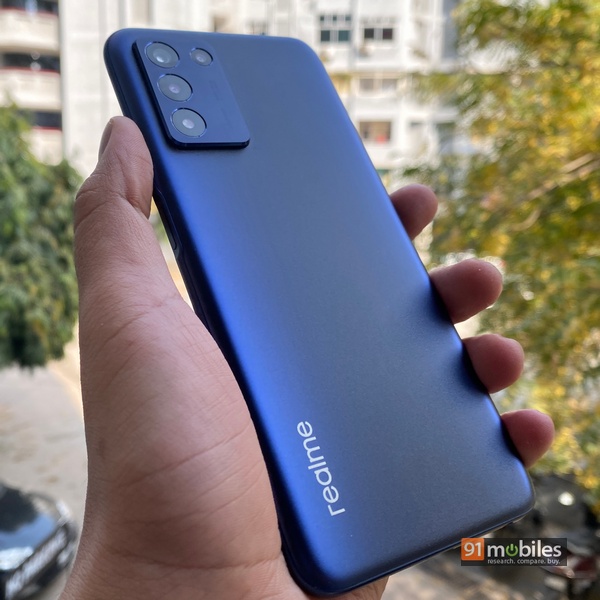 Realme 9 SE 5G has a lot going for it, and the device offers decent battery life, a super-smooth 144Hz refresh rate and a user-friendly software experience. However, the device is let down by a markedly poor camera implementation. Rest assured, the Realme 9 SE 5G is a one-trick pony, so, if you are looking for sheer performance, the handset will not disappoint you. 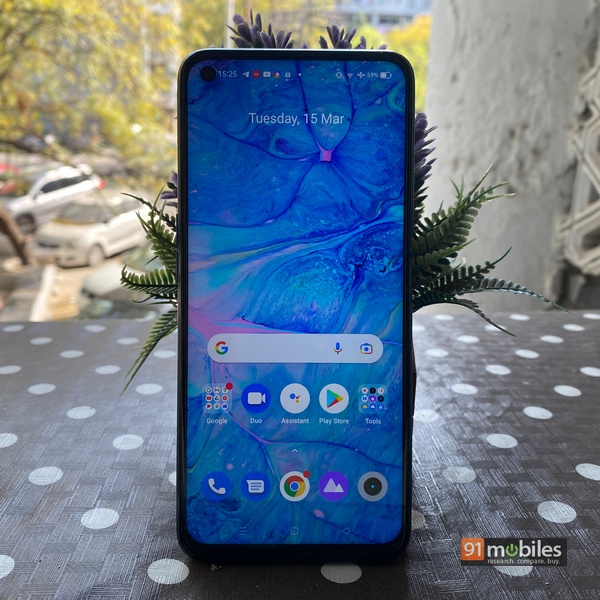 Right off the bat, I noticed that the Realme 9 5G SE has a bit of heft to it and the device felt quite heavy in my hand. In fact, weighing in at around 200g, the handset is among the chunkier phones in the segment, and that’s despite the device utilising a unibody polycarbonate build. Thankfully, unlike the herd of glossy-back phones, the Realme 9 5G SE makes use of a matte finish on the back, which will not go unappreciated by buyers. I was sent the Azure Glow variant for review which comprises a single deep blue colour scheme running across the length and the width of the chassis. In fact, the colour seeps into the camera housing as well, ensuring continuity in the design of the phone. And, since we’re on the subject of the phone’s camera module, you should know that the optics are positioned towards the top-left of the set in a typical inverted L shape. As for the rest of the I/O, the device offers a side-mounted fingerprint sensor that doubles up as the power button. The unit ships with a volume rocker on the opposite fascia, and touts a USB Type-C port, a 3.5mm headphone jack, and a speaker grille at the bottom. On the whole, the Realme 9 SE 5G offers a tasteful design, however, I wish the company would’ve included stereo speakers with the phone. As things stand, the device comes across as the “odd one out”, given how most competing phones provide a better audio setup. 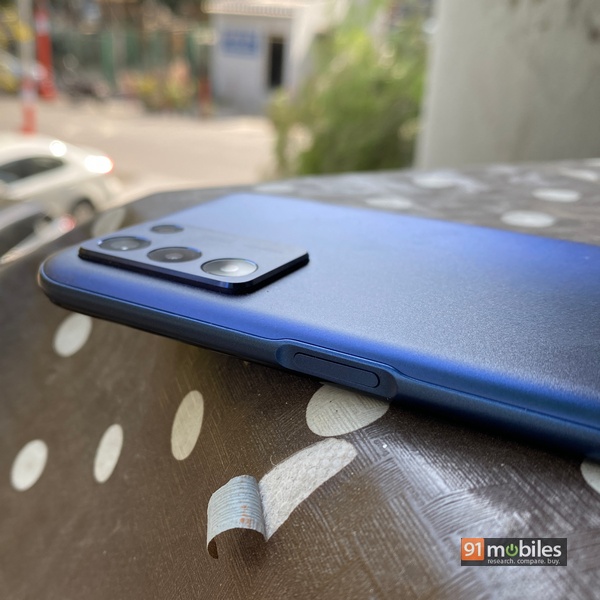 Display-wise, the Realme 9 SE 5G features a 6.6-inch IPS LCD panel that refreshes rapidly at 144Hz – a first for the affordable segment. Now, to the untrained eye, the jump from a 120Hz screen to a 144Hz panel might not be perceptible. But, if you are a discerning user, then you will undoubtedly pick up on the screen’s superior smoothness. What’s more, buyers can opt to use the phone with the refresh rate set to switch smartly between 60Hz and 144Hz depending on the content that’s being relayed on the screen as well. Now, I will admit, the panel isn’t very colour accurate and the screen’s viewing angles are not the best either. However, for the purposes of casual media consumption and social media browsing, the Realme 9 5G SE will serve you amicably. For OTT content, the device supports WideVine L1 certification, and therefore, you can stream your favourite TV shows and movies in HD glory. That said, the device cannot relay HDR media from services like Netflix, which is a bummer. Thankfully, barring the phone’s unusually large chin, the display is bordered by reasonably sleek bezels. What’s more, the punch-hole notch on the top left of the panel is on par with the competition too, be it in terms of size or backlight bleeding. Lastly, the brightness levels seemed reasonably optimum and at 600 nits, the phone can comfortably be used even under harsh sunlight. 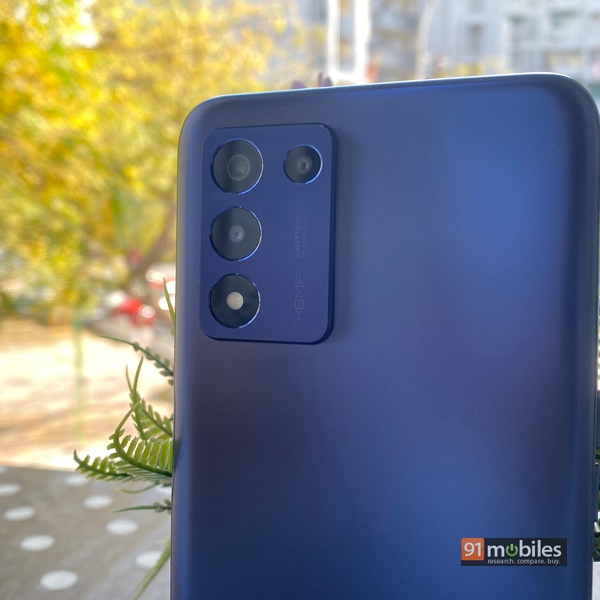 Talking about camera performance, the Realme 9 SE 5G borrows the Realme 9 5G’s (review) camera stack. Correspondingly, the phone ships with a 48MP primary sensor that works alongside a 2MP depth and a 2MP macro shooter. For selfies, the device gets a 16MP selfie camera on the front. Now, I won’t beat around the bush at all – the Realme 9 SE 5G’s image-taking prowess is nothing to write home about, especially when you factor in the herd of camera-centric phones retailing in the affordable segment. During the day, the Realme 9 5G SE takes crisp shots and the dynamic range is wide enough in most shooting scenarios. Auto HDR fires up effectively when required but it doesn’t make too much of a difference. I should also add that the sharpness and detailing in the shots was to my liking and I was particularly happy with the fast shutter speeds offered by the phone, something that the regular Realme 9 struggled with quite a bit. On the flip side, the main sensor’s colour reproduction sways in the favour of punchier tones. Furthermore, the device’s exposure handling could have been better. However, in the overall scheme of things, the phone can click serviceable images during the day. At night, the Realme 9 5G SE definitely fares better than the standard 9 5G, although that is not saying much, to begin with. In fact, the camera’s colour science at night is still slightly wayward. The dedicated Night mode outputs a bright scene, thereby robbing the night sky of its natural inky blacks. Detailing in shadowy parts of the frame is generally not defined at all and in most cases, without assisted street lighting, the pictures appear a tad over-processed. The lack of an ultra-wide shooter stings as the 2MP macro is nothing spectacular while the 2MP monochrome sensor’s shots can easily be achieved using a filter. Finally, the 16MP selfie camera clicks slightly overprocessed shots albeit with accurate skin tones. 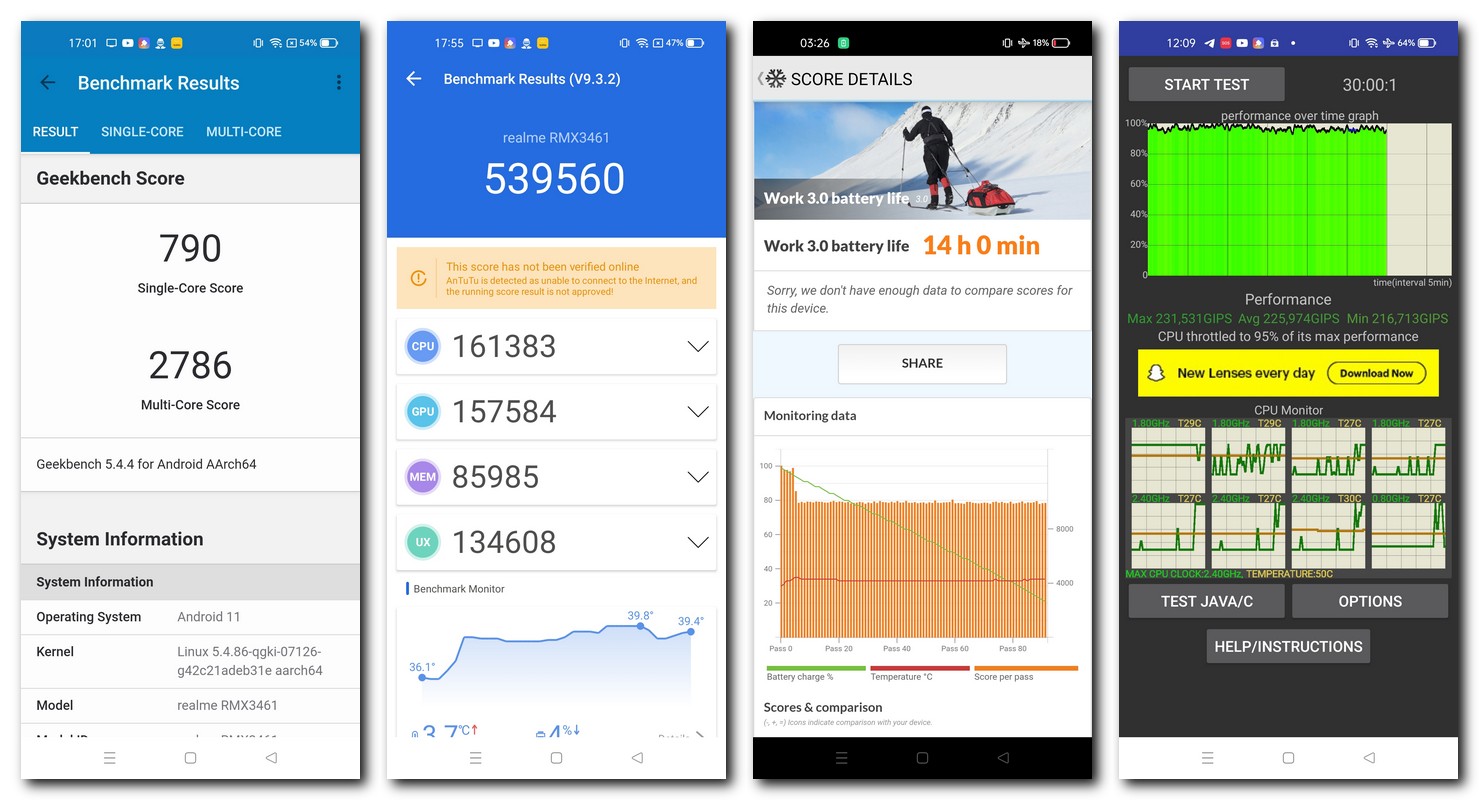 In the processing department, the Realme 9 SE 5G employs Qualcomm’s Snapdragon 778 platform, which is the choice of a few other competing devices as well. I can say with certainty that performance is going to be a non-issue with the device and the fact is further solidified by the phone’s stellar benchmark numbers. In Antutu, the handset benched 539,560 points, which is on par with some pricier flagship devices. The smartphone’s GeekBench multi-core score of 2,786 is pretty high for a sub Rs 20,000 phone too. What’s more, I didn’t stumble across any instances of lag or stutters whilst jumping between resource-hungry apps on the phone either. For gaming purposes, I tested BGMI on the device and it was able to run the game at Extreme (60fps) frame rate and Smooth graphics. What’s more, the handset’s performance didn’t throttle in the slightest, which is further substantiated by the unit’s the CPU Throttle test results wherein, the CPU was able to maintain up to 95 percent of its peak performance after running a stress test for 30 minutes. As for RAM and storage, the device ships with 6GB or 8GB of LPDDR4x memory that has been paired with 128GB of UFS 2.2 storage. A 1TB microSD card slot can also be inserted to boost up the storage while the virtual memory feature can borrow up to 5GB from the ROM to increase the RAM capacity, which is great. 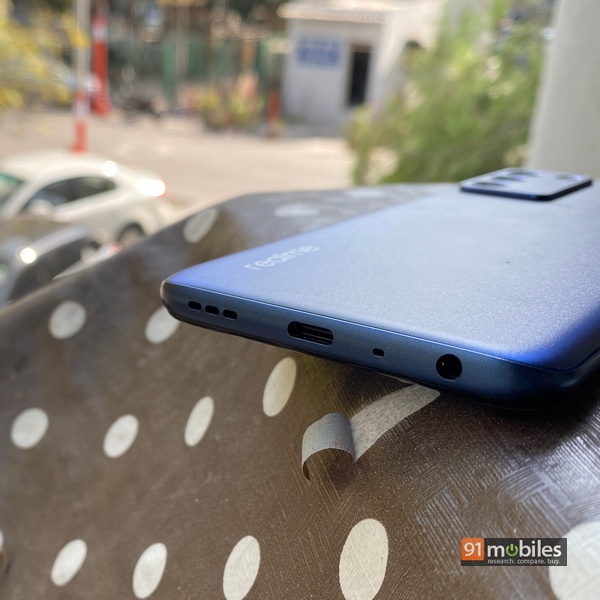 Apart from that, the fingerprint sensor is extremely quick to authenticate and get user’s into their home screens. That said, the face recognition tech falters in low light scenarios. The unit’s mono speaker gets the job done, however, the handset’s audio capabilities will undoubtedly leave movie buffs wanting more. 5G capabilities are present on the device of course, but there is no telecom infrastructure in the country to utilise it. The 4G LTE speeds on Noida’s Jio network worked flawlessly, as did the microphone, earpiece and 3.5mm headphone jack. 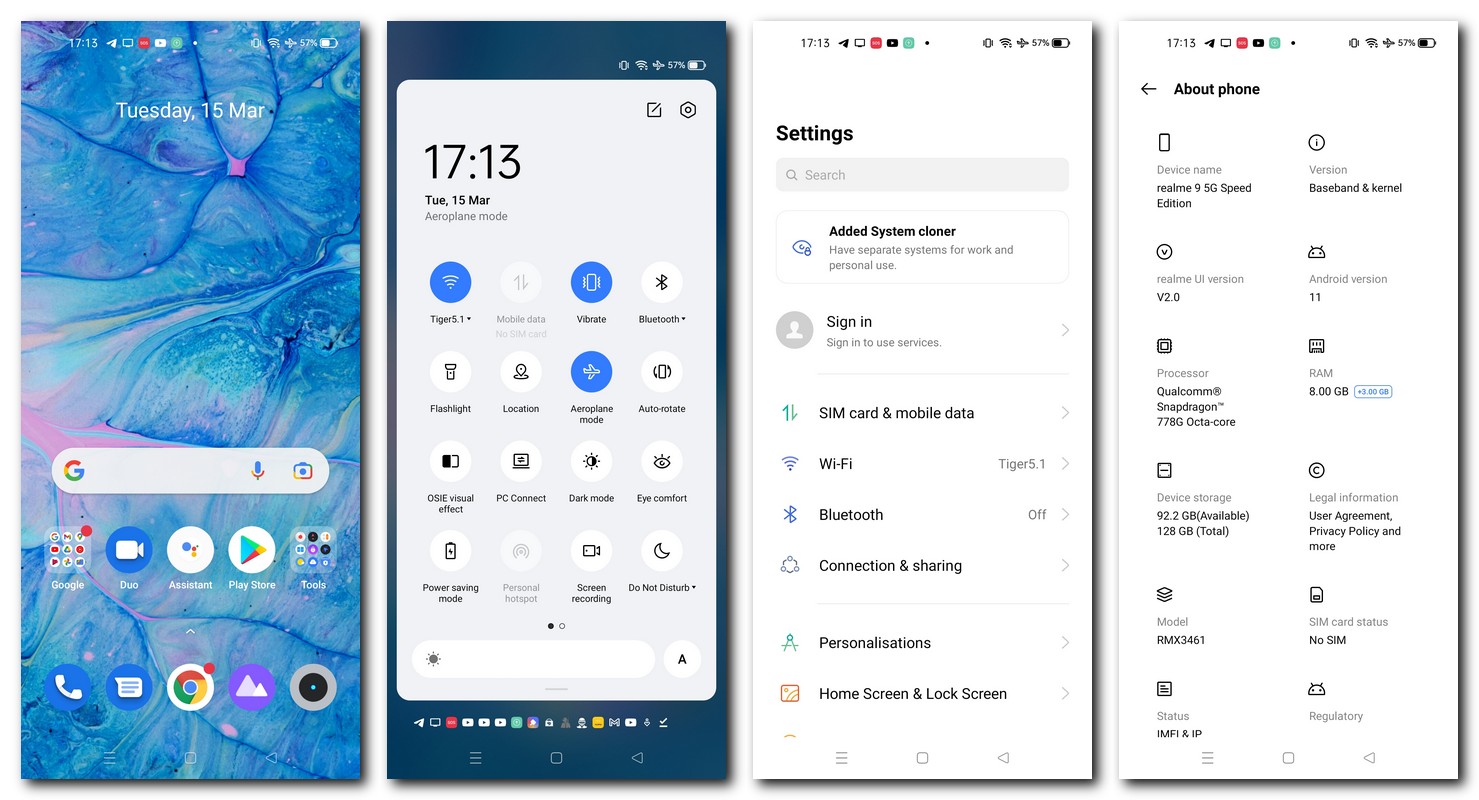 As for software, the smartphone ships with Realme UI 2.0 on top of Android 11. The company has made little progress in reducing bloatware from its device’s interface but the user-friendliness has definitely improved over the previous versions. If you wish to know more, you can read my full review of the Realme 9 5G where I have gone into more detail about RealmeUI 2.0’s software experience. 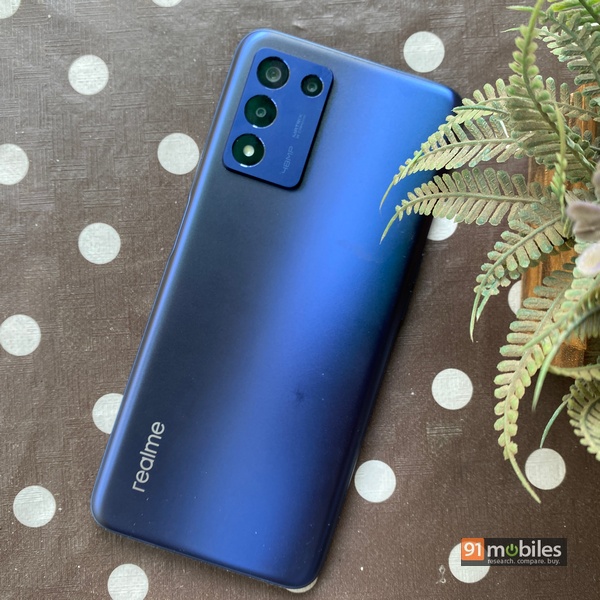 Battery-wise the device comes with a standard 5,000mAh cell and charges at 30W via the USB C port. I ran PCMark’s Battery 3.0 test wherein, the handset netted a commendable 14 hours of use off a single charge. Now, truth be told, my usage centred more around testing the graphical capabilities of the device which in turn drained the battery a bit faster and gave me a screen-on time of about 4 hours. However, on a normal day with only a few BGMI sessions and a couple of episodes of Netflix’s Drive to Survive, I rarely looked for the charger at the end of the day. In any case, the device’s 30W charging speeds can juice up the device in about 90 minutes. 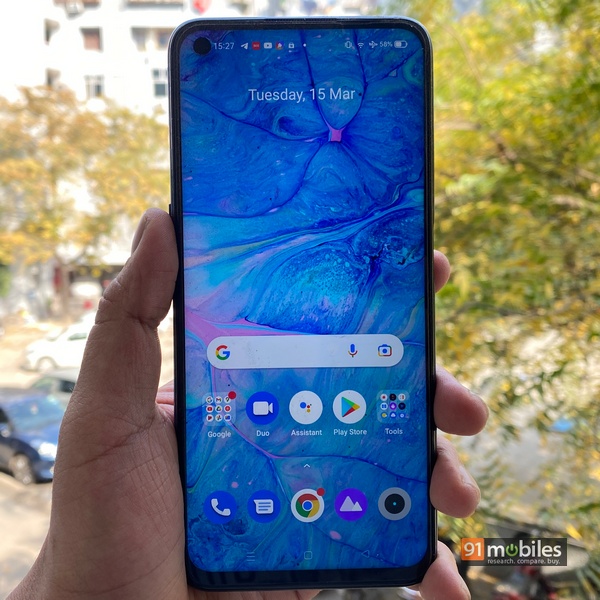 The Realme 9 5G SE is a power-packed contender with the smoothest display in its price bracket. Now, the handset’s design doesn’t feel as premium and the lack of stereo speakers stings a bit too. Furthermore, the unit’s low-light camera performance lacks behind competing products as well. On the bright side, the device offers mobile gamers a solid avenue to explore graphically-intensive titles without burning a hole in their wallet. My only concern is that the Redmi Note 11 Pro+ offers better camera hardware, an OLED panel, and faster charging for just Rs 1,000 more. Be that as it may, if you are looking for a performance-focussed phone with a clean UI, the Realme 9 5G SE will not disappoint you.