“Packed with an Intelligent selfie camera and a nearly bezel-less design, does the F5 deserve a place in your pocket?“

Once the plot for many sci-fi movies, Artificial Intelligence has now become the buzzword in the consumer tech space. It also promises to change the way users interact with their mobile devices. We recently saw Google talk about an “AI First’’ future when the company launched the Pixel 2 XL (review), a smartphone which comes baked with the Google Assistant. On iOS side of things, Apple’s latest iPhone trio are infused with AI too, as the company has added a neural engine capable of machine learning into the mix alongside the A11 bionic chip. Now, Chinese tech giant OPPO is bringing its own spin to an AI-powered smartphone with the OPPO F5, which comes with AI-based beautifying technology. Spoiler alert – the selfies turned out great, but is the F5 just a one-trick pony or there more to it? Stay with me to find out. 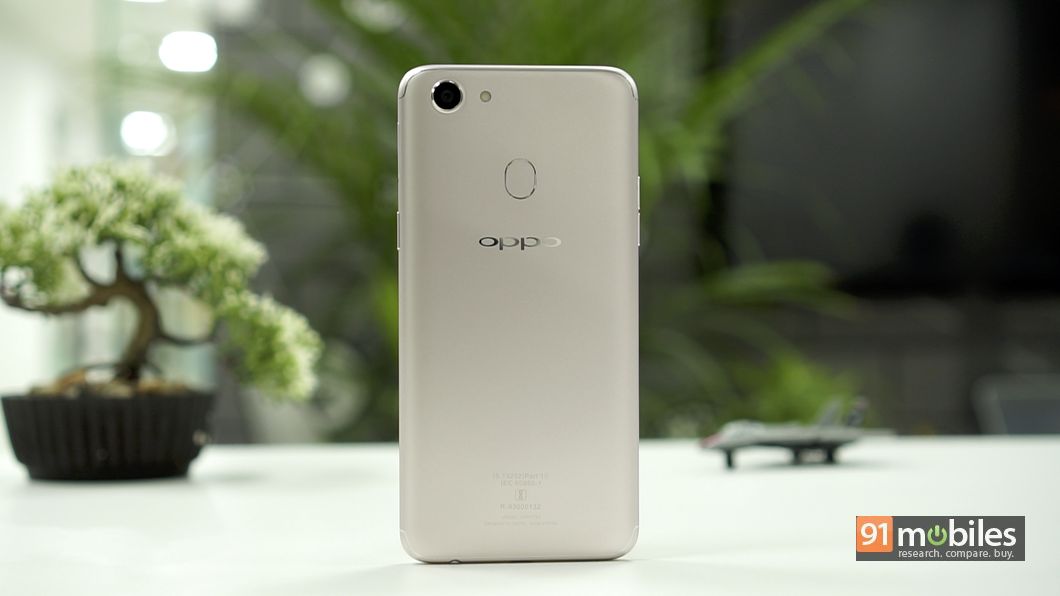 The F5 is to OPPO what the iPhone X (review) is to Apple. Both the smartphones feature a radical shift in design which will undoubtedly pave the way for future offerings. Now, we’ve already seen countless iterations of bezel-less design on budget smartphones, but fancy marketing videos aside, the design of these smartphones isn’t always executed with the spit and polish you’d otherwise see on a high-end flagship. Unfortunately, the OPPO F5 falls under the same category. From a distance, the F5 appears to be clad in a unibody metal design, however, don’t let that fool you. The smartphone has been constructed out of plastic which gives a lot to be desired once you actually pick up the device. Now, with that said, there are some fringe benefits you get with the plasticky build of the F5. For starters, you won’t have to wipe the back of the smartphone to remove fingerprint stains. Secondly, despite its size, the F5 is feather light which is great for your pockets if you travel a lot since you won’t have to deal with another awkward bulge in your pants (if you know what I mean). 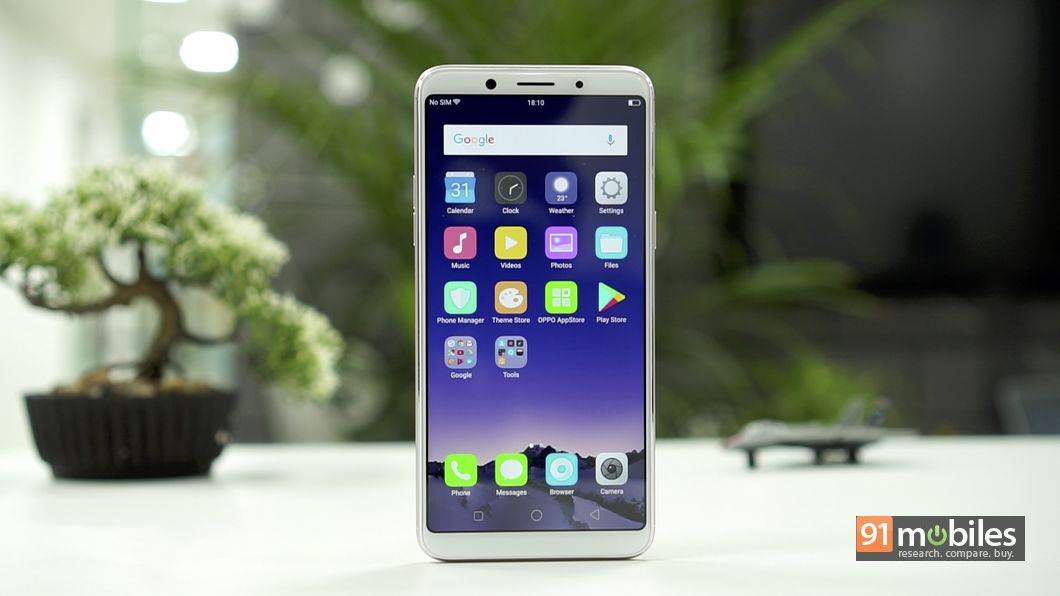 I have some other pet peeves about the design of the smartphone too. The screen, for instance, doesn’t seamlessly merge into the body of the smartphone and instead, rests on a plastic trim which bulges out, taking away from the smartphone’s otherwise clean design. Furthermore, while the smartphone boasts an edge to edge display, the top and bottom bezels are still fairly pronounced and there’s even a black border abutting the display which diminishes the experience of consuming media on the smartphone. Moreover, the effect of the black border feels more pronounced on the Champagne gold unit I got to review, which has white bezels on the front. However, the smartphone has an ergonomic body which is comfortable to hold and nestles well in the palm. The edges come with a rounded finish so they don’t bite even if you hold the smartphone for an extended period. Lastly, since the smartphone is so light, one-handed usage is excellent too and I never had to worry about the F5 toppling. 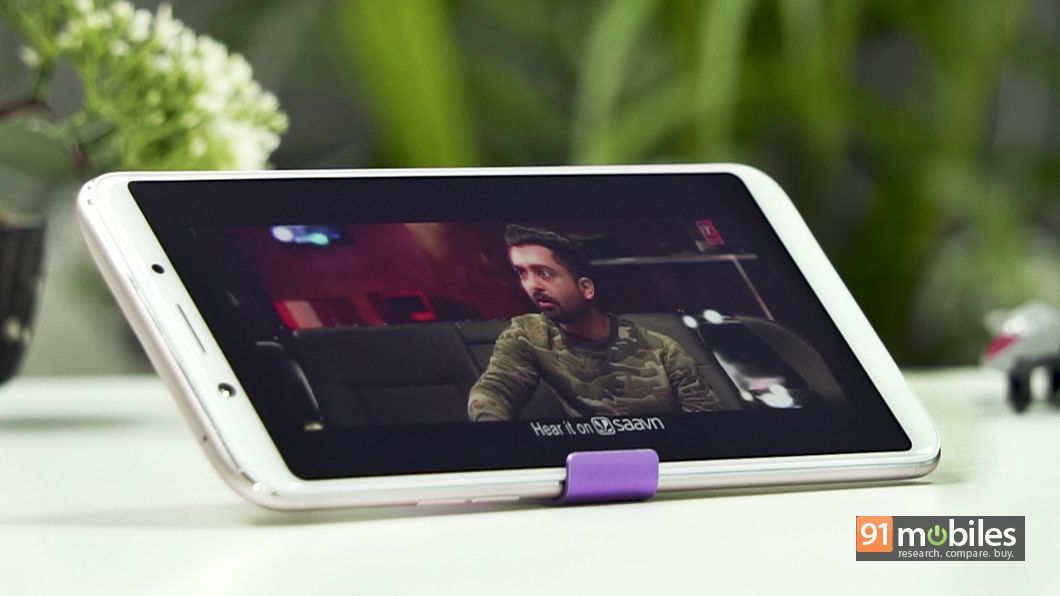 So far, the OPPO F5 has not managed to score very high in my books, but once you start using the smartphone as your daily driver, you’ll learn to look past the design flaws and enjoy the handset’s crisp 6-inch FHD+ display. Much like most other smartphones in the market, the F5 also boasts the 18:9 aspect ratio paving way for a significantly taller screen. Coupled with the smartphone’s hand-friendly design, you won’t have to worry about dropping the phone on your face while watching a movie at night. The display technology is LCD, however, I found the colours to be punchy regardless. The viewing angles are great too and the text on the display is legible even when the smartphone is under direct sunlight. 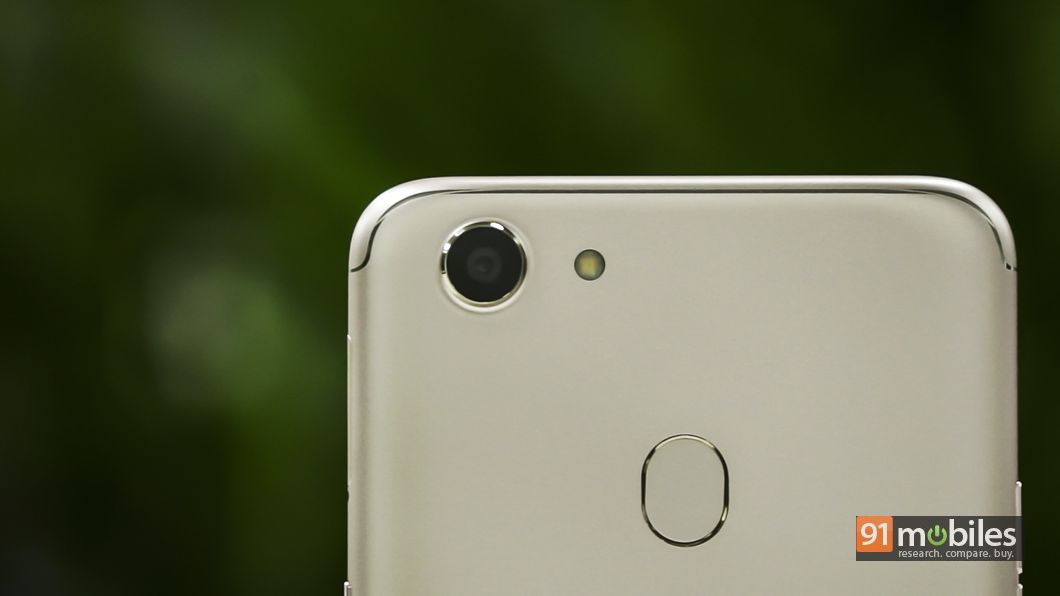 One place where OPPO has Apple beat is that the F5 still ships with a fingerprint sensor, only this time, it has been repositioned towards the back of the unit. If you’ve ever used any OPPO smartphone before, then you’ll know what to expect from the fingerprint sensor on the F5. It’s insanely quick, accurate and will unlock your smartphone in the blink of an eye.

Following in the footsteps of companies like Apple and OnePlus, OPPO too has bundled a face unlock feature on the F5 which works great. Setting up the face unlock takes less than a minute and while it might not be as secure as Apple’s Face ID, it is extremely quick. 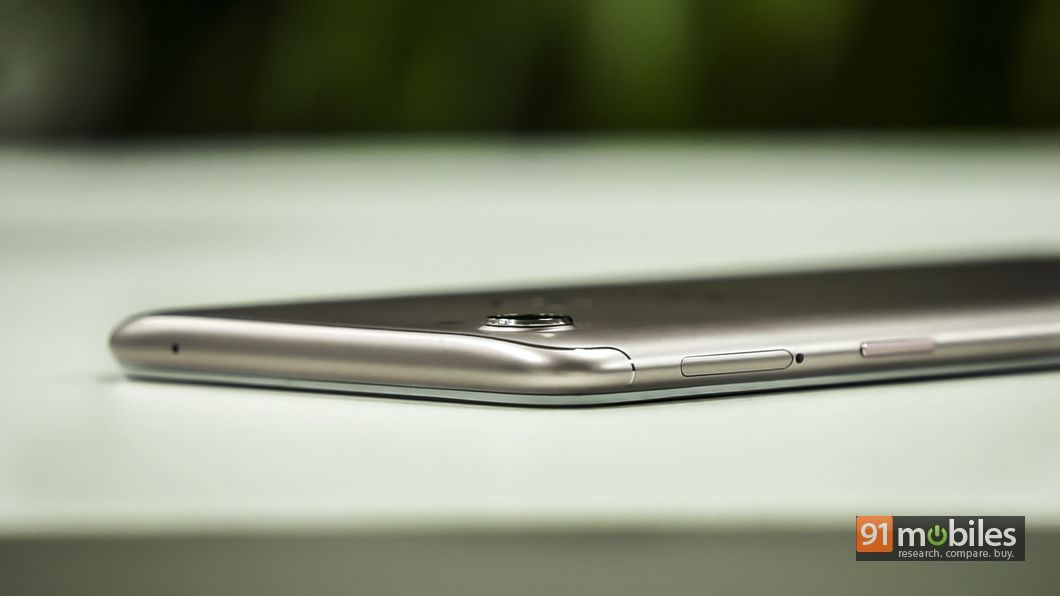 Other than that, the design of the OPPO F5 is a pretty standard affair. The physical buttons present on the left and the right fascia have good tactical feedback. The smartphone misses out on a USB Type-C port, but retains the headphone jack. The primary camera of the smartphone protrudes slightly outwards, though the smartphone doesn’t wobble if kept on a flat surface so kudos to OPPO for that. 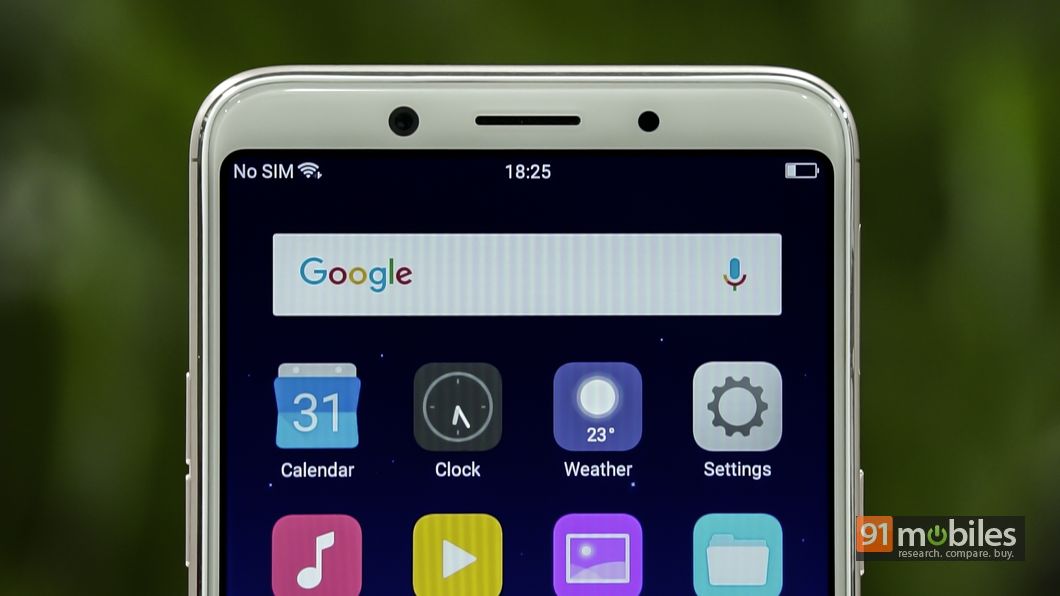 OPPO has been at the forefront of the selfie revolution ever since the brand stepped into the Indian market. From being one of the first brands to offer smartphones which come with a beautify feature to dual-cameras on the front for enhanced selfies, the company has tried its hand at almost everything. This time around, you won’t get two cameras on the front, but OPPO is backing the selfie shooter on the F5 with AI smarts. Now, before we dive into the hows and the whys, let me run some technical numbers by you. The OPPO F5 ships with a 20MP front camera which comes with an aperture of f/2.0. The sensor comes with a dedicated LED flash unit as well and since the smartphone is targeted at selfie-enthusiasts, you’ll get some additional features with the secondary camera which I’ll talk more about in a bit. 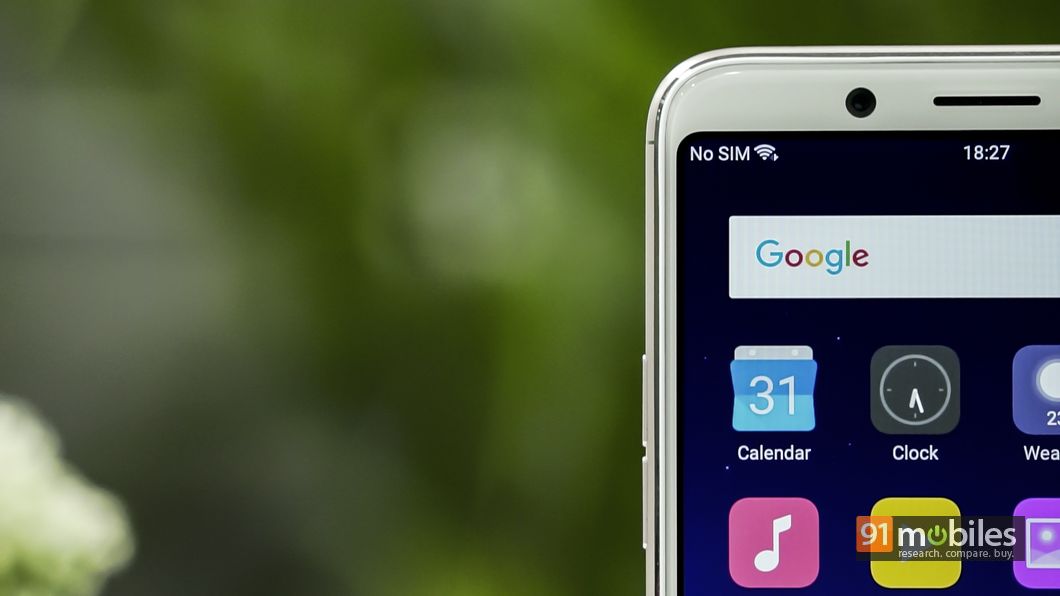 Now, let’s address the highlight of the phone – the AI-backed selfie camera and how it works. So, the F5 comes with a facial recognition technology which scans almost 200 positioning points on your face. The camera then accentuates the user’s facial landmarks by enhancing the symmetry between the eyes, nose, cheekbones and even gives you a crispier jawline. Furthermore, the camera is smart enough to always keep your face in focus, regardless of what the background setting is. Therefore, you could be at a restaurant or just out and about for a walk in the park, the camera will automatically gauge the background lighting conditions and will add luminance to your portraits accordingly. In a nutshell, OPPO claims that the camera will make you look better. And I think it does.

I click a lot of selfies and over the course of my review period, the F5 constantly amazed me with incredible portraits. So much so, I can say without hesitation that the F5 offers the best selfie camera in its price range. The pictures I clicked with the smartphone turned out to be crisp and rich in details. Moreover, unless you’re shooting in beauty mode, the smartphone manages to keep the skin tone natural too, a complaint I’ve had with previous OPPO smartphones. Selfies taken in low light do take a dip in quality, though the addition of a front-firing LED flash ensures that the images are still passable by social media standards. Interestingly, the front camera can also shoot images in Bokeh mode, a feature which has been omitted for the rear-facing camera. Much like the Pixel 2 XL, the OPPO F5 gathers depth information from the 20MP selfie shooter and adds some software wizardry to punch out DSLR-esque Bokeh shots. The result isn’t as polished as I would’ve liked and most shots I took had blurry edges. However, that’s the same problem we’ve seen with some other high-end offerings.

The rear cameras on OPPO smartphones have always lived under the shadow of the selfie shooters and the same is true for the F5 too, which comes with a 16MP f/1.8 aperture sensor. However, that’s not to say that the primary camera is any slouch. In fact, pictures captured during the day with sufficient natural light turned out great. The colours felt saturated and punchy and the camera managed to capture good amount of details too. As expected, the camera struggles in low light and the images I shot with the F5 at night had considerable noise. Another thing to note here is that while the camera can shoot good macro images with adequate background blur, the smartphone’s camera can take a while to focus on to the subject. Powered by the MediaTek MT6763T octa-core processor which has been paired with 4GB of RAM, the F5 doesn’t take the cake for offering the most cutting-edge specifications available under Rs 20K. Now, let’s get the obvious out of the way first – yes, the smartphone does struggle with intensive titles, and games like Asphalt 8 will require you to tone the graphics settings down to get playable frame rates. However, if you are more of a laid-back gamer then you won’t come across any lag on the smartphone. Even with multiple applications open, the smartphone does not get sluggish and jumping in and out of applications is a smooth experience too. All in all, the OPPO F5 isn’t the fastest smartphone you can buy for under Rs 20K… but then, maybe it won’t be wrong to say that you don’t buy an OPPO smartphone for raw performance in the first place. 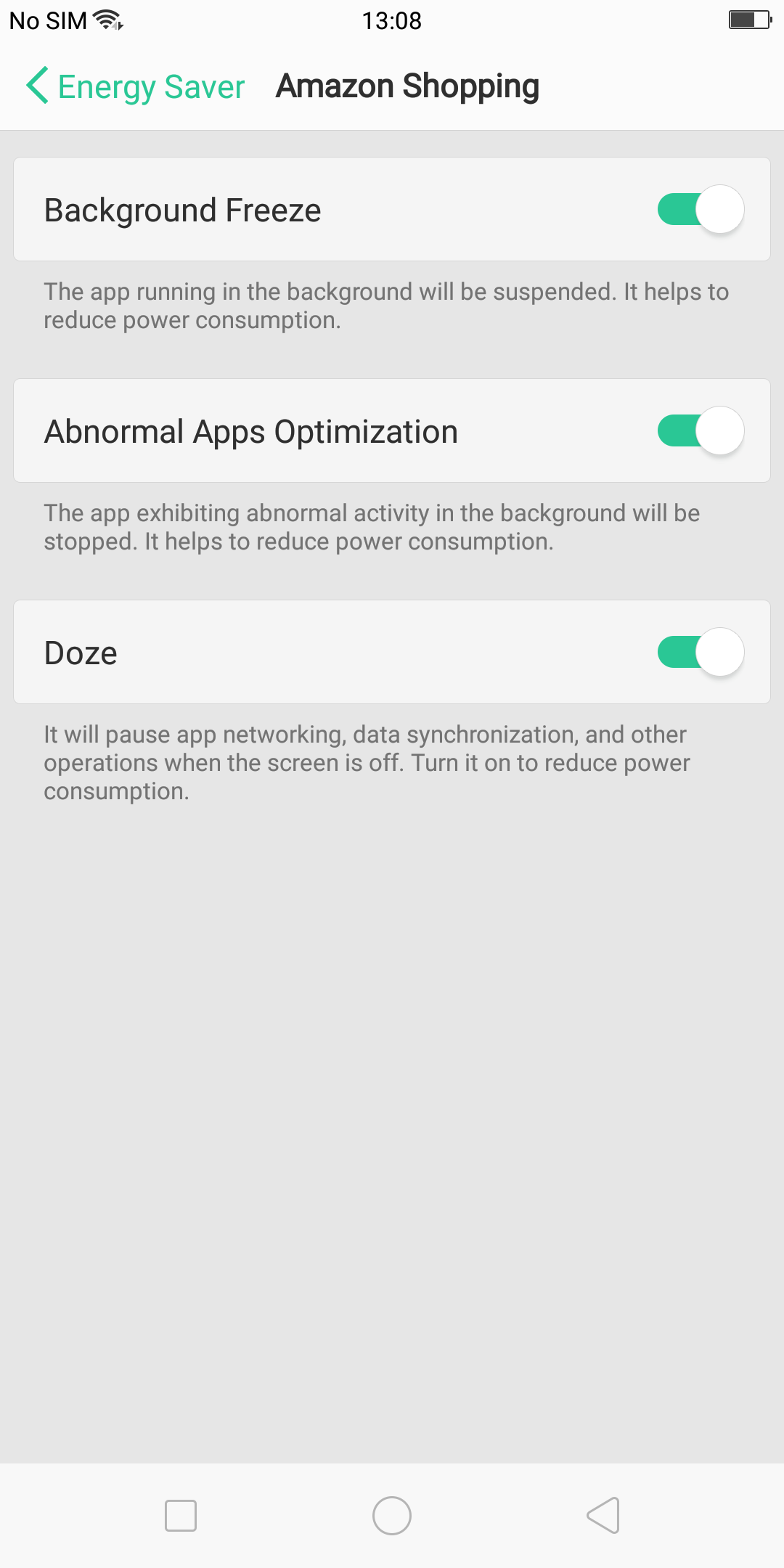 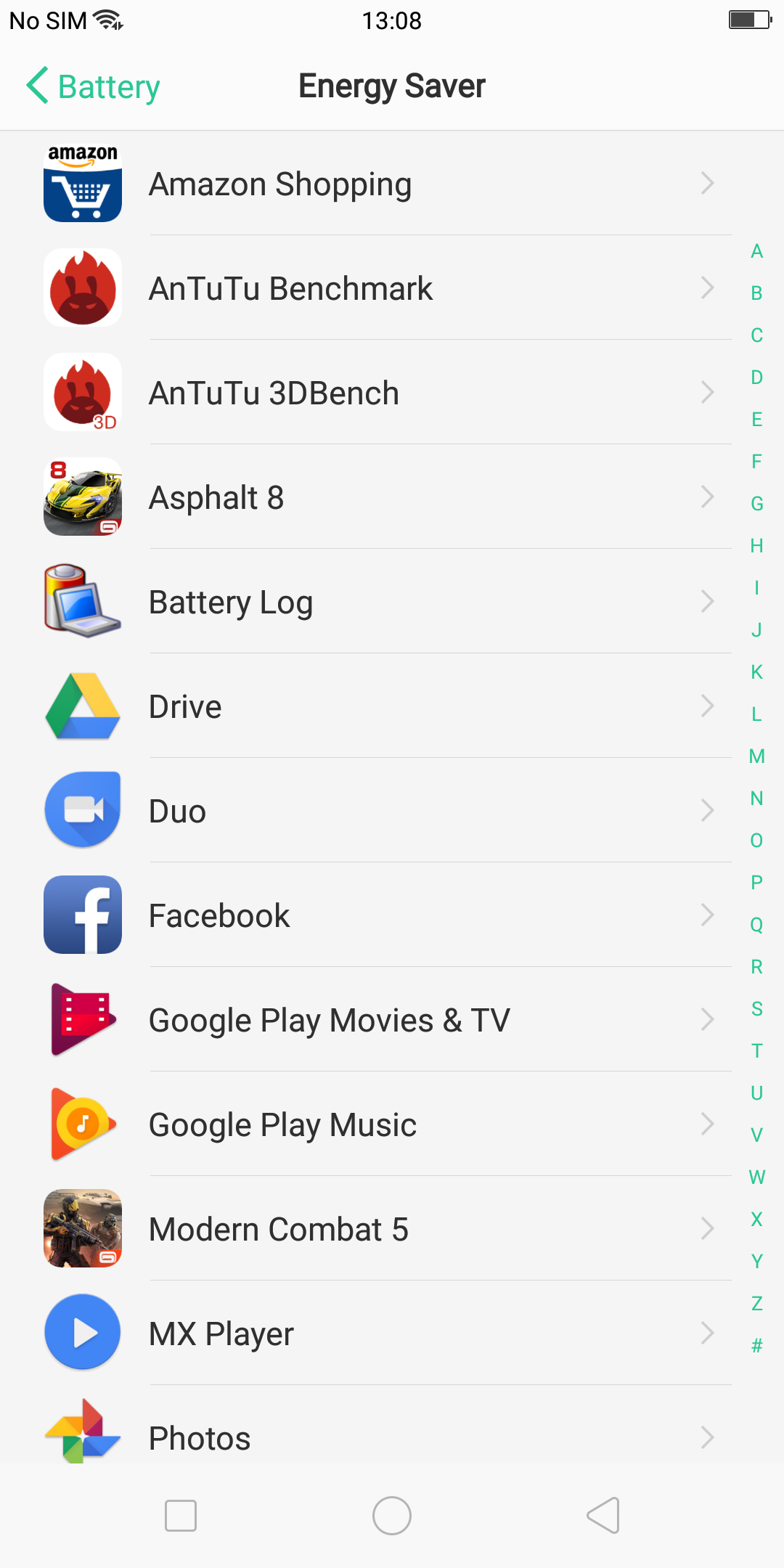 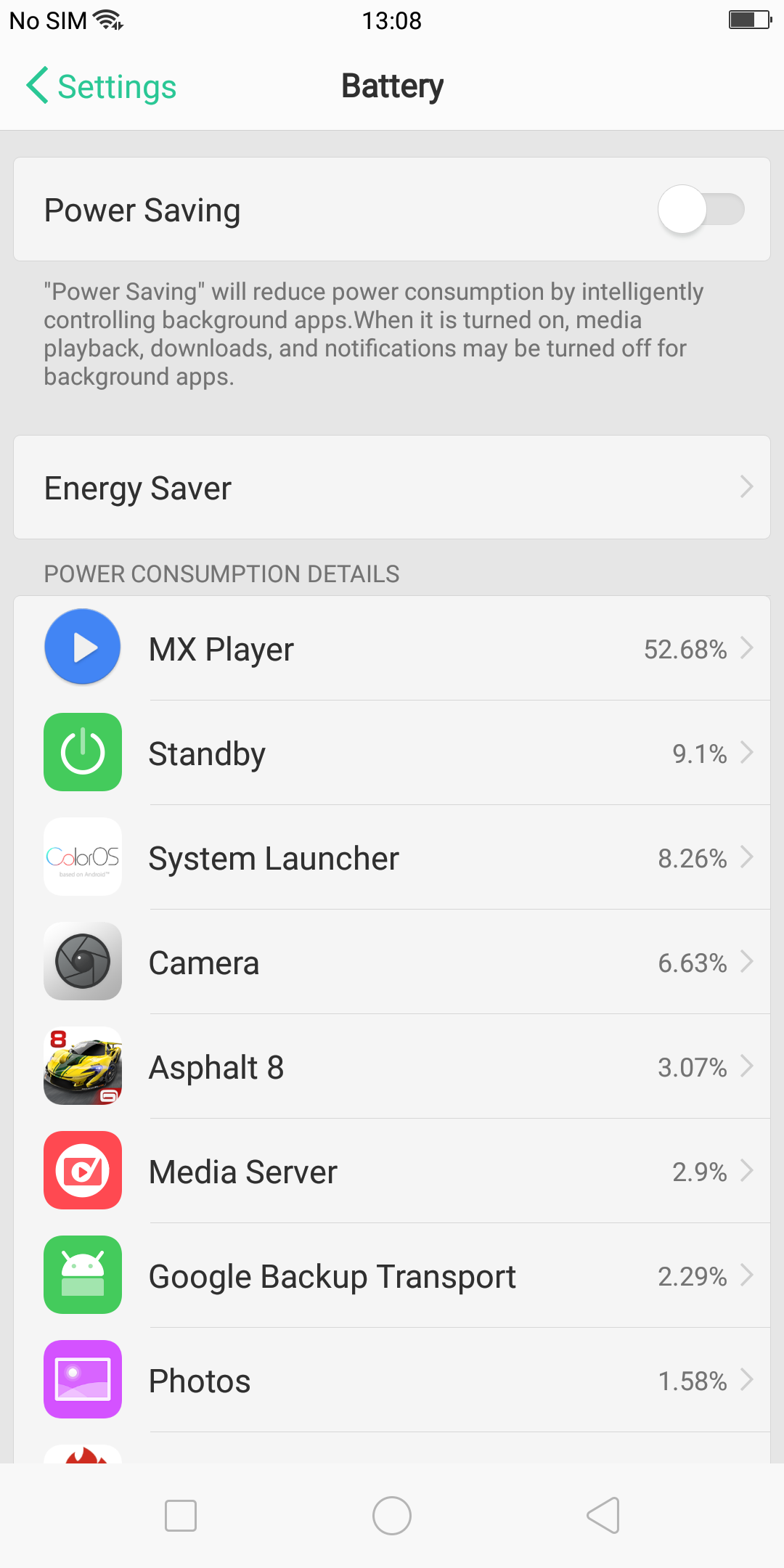 In the battery department, the OPPO F5 ships with a 3,200mAh unit which should see you through the end of a heavy day. You won’t have much juice left in the tank by the time you hit the bed and therefore, will have to charge the smartphone overnight in order to get through the next day. Now, one of the biggest complaints I’ve had with the F5 is that it doesn’t support fast charging and takes over 90 minutes to reach full charge. 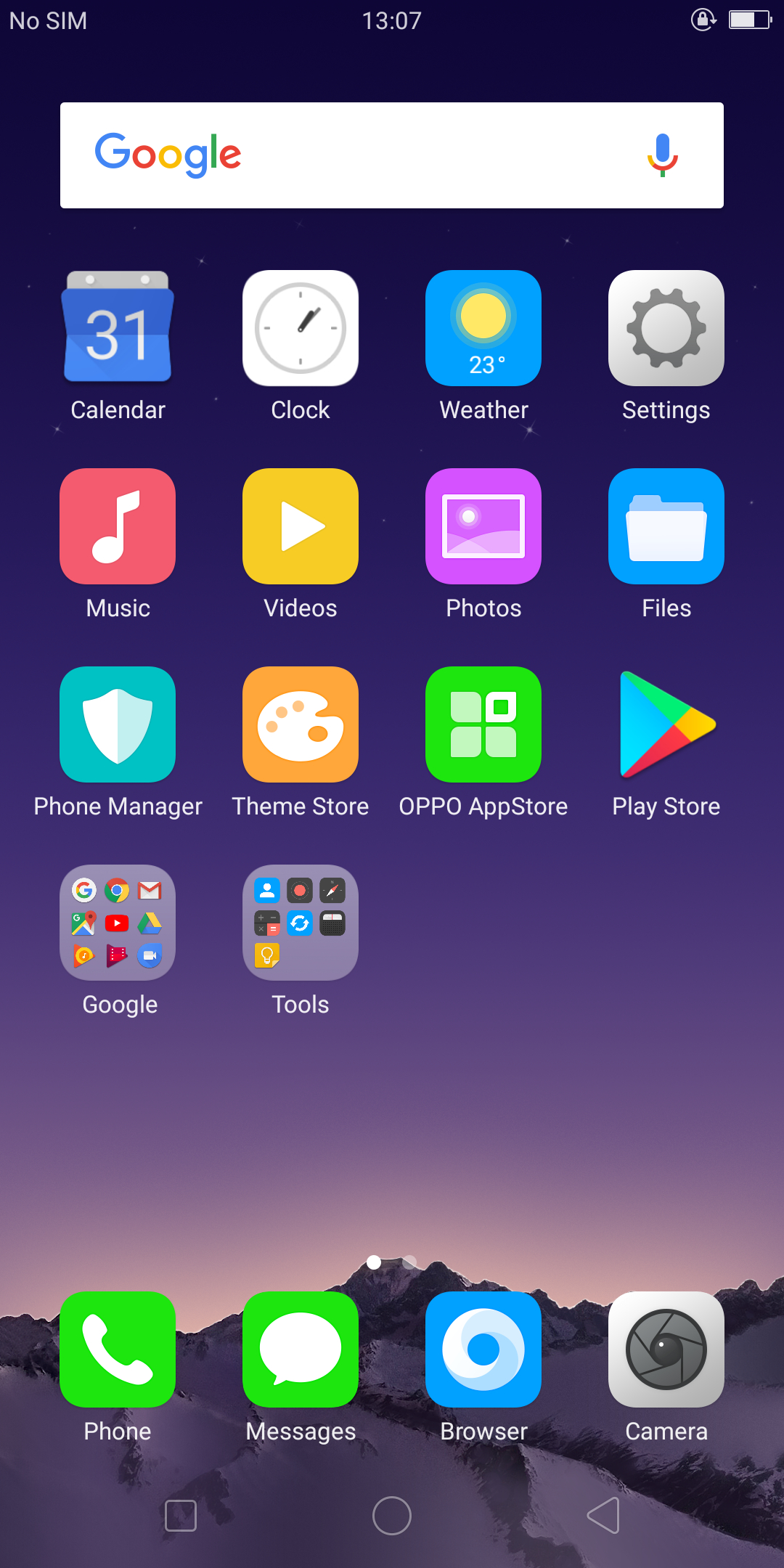 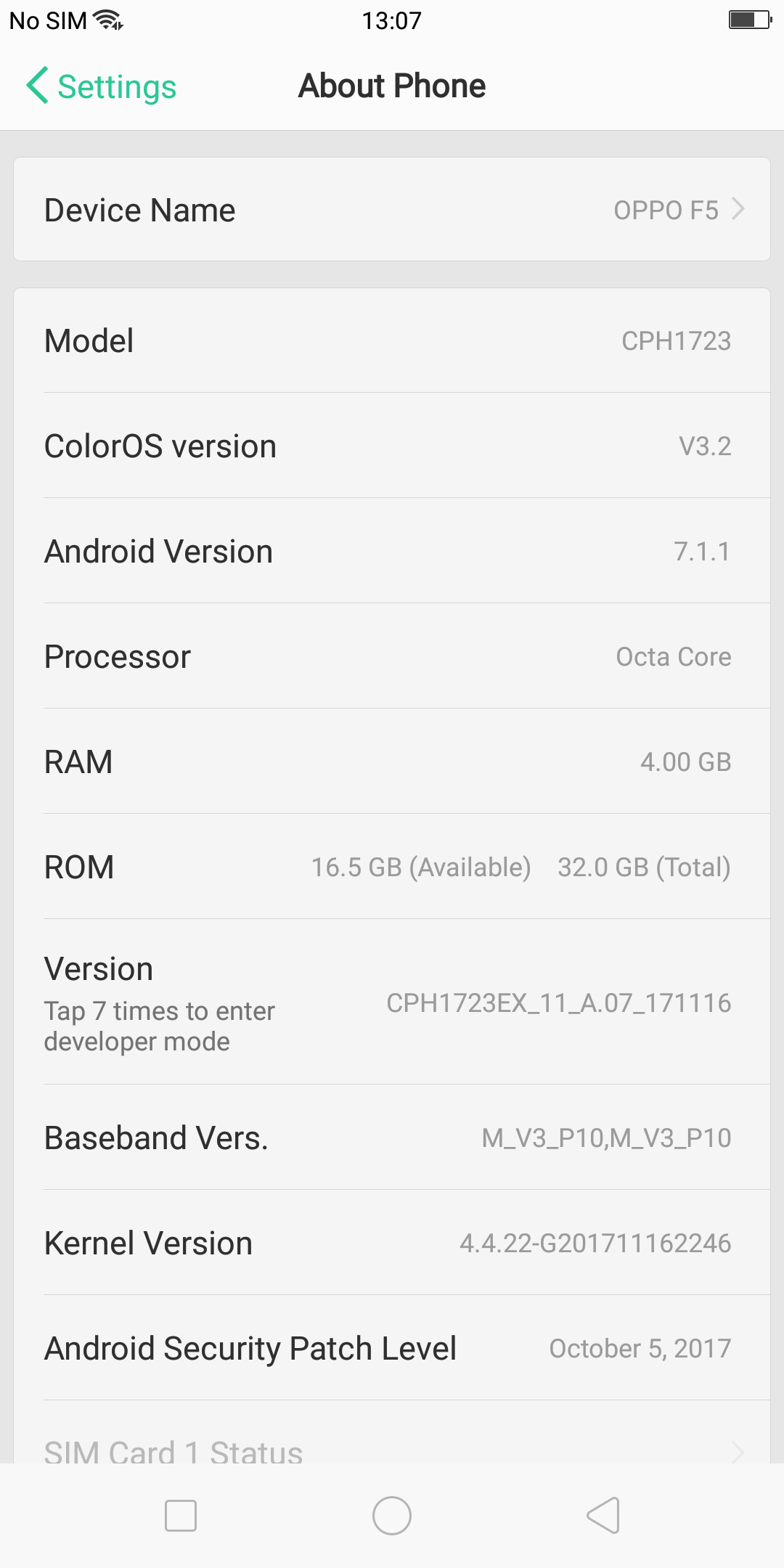 Software-wise, my review unit of the OPPO F5 runs a heavily themed skin of ColorOS on top of Android Nougat. The interface will be a change of pace for those migrating from stock Android, but it does come with some features unique to the F5. I won’t go into too much detail here since we’ve already covered them in depth in our other reviews but you can expect the F5 to ship with features like a theme store and Clone Apps. Lastly, since the ColorOS interface lacks an app drawer, all of your installed applications will be laid out on the home screen which means you’ll be swiping a lot unless you organise the applications neatly in folders. 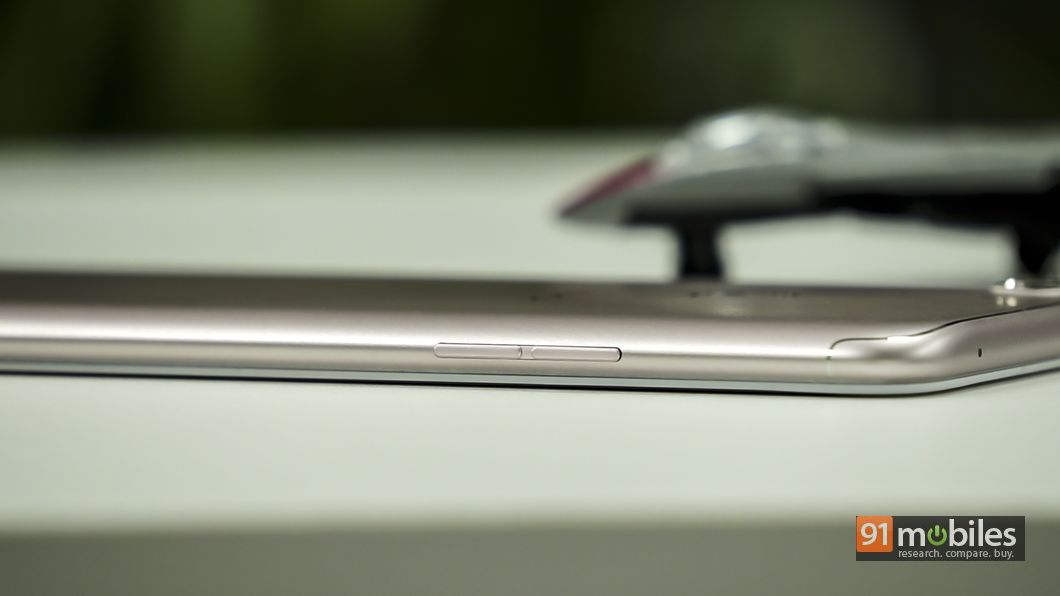 OPPO has made a lot of correct decisions with the F5, and some questionable ones too. The F-series no longer has an old school vibe, thanks to the sleek bezels on the F5 and the AI-backed selfie camera genuinely captures incredible selfies. While the battery capacity of the smartphone is nothing to write home about, the battery life is pretty good and the smartphone will easily last you a day on heavy usage. Unfortunately, the smartphone does come with its fair share of compromises. The performance of the phone is average at best and the plastic build of the smartphone does little to justify its price tag. The choice then boils down to your personal preference – would you rather pay a premium for stunning selfies or opt for a more well-rounded option for less than the price of the F5.