OPPO is best known for its selfie-centric devices which, back in the day, reigned supreme in the affordable segment. That said, over the years, the company diversified into newer, costlier price brackets and it now offers everything under the sun including foldables, premium Android flagships, and even flagship killers. 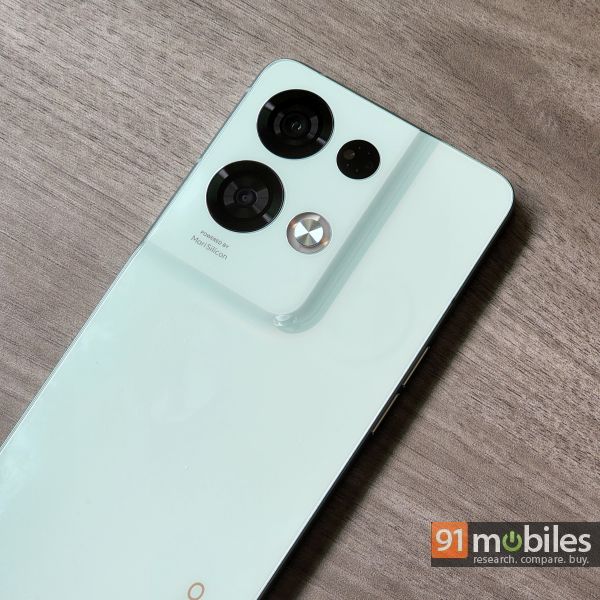 Case in point, the recently-launched OPPO Reno8 Pro which touts a familiar yet enticing spec sheet headlined by the MediaTek Dimensity 8100 SoC. Understandably, there’s no shortage of power-packed Android handsets in the market right now which begs the question – should you buy the Reno8 Pro? More notably, is the device a better buy than, say, the OnePlus 10R (review), or the Nothing Phone (1) (review)? I’ll answer the aforementioned queries and more in this review. Stay with me.

The OPPO Reno8 Pro is dressed to the nines and the device offers solid performance too. That said, buyers looking to maximise their purchase might find the OnePlus 10R more to their liking, which offers similar specs albeit retails for less.

OPPO’s design team is no stranger to good-looking phones and the company’s Reno range has, time and again, impressed the audience with its stylish aesthetics. Be that as it may, the Reno8 Pro’s design seemingly draws inspiration from a handful of different phones. The back of the device, for instance, seems like a cross between the OnePlus 10R and the OPPO Find X5. That’s not a bad thing per se, as the device assimilates the characteristics of the aforementioned handsets quite tastefully. Better yet, the smartphone’s camera bump looks bizarre and it attracts attention left, right, and centre. And, if the Glazed Green colourway is too loud for you, then you can even pick up the device in a Glazed Black hue, which looks just as neat although might show more smudges and fingerprints. 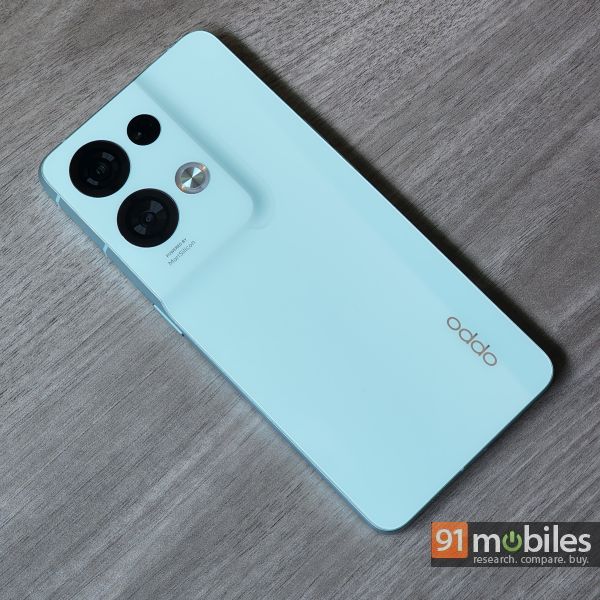 Suffice it to say, the OPPO Reno 8 Pro exudes flair and the device has considerable flaunt value. What’s more, the smartphone feels superbly premium as well, which can be accredited to its glass sandwich design and chamfered aluminium frame. The chassis feels sturdy and robust and the device comes layered with Corning’s Gorilla Glass v5 on the front too, which is great. And, much like the OnePlus 10R, the Reno8 Pro ships with a flat frame as well, which allows users to grip it comfortably. Furthermore, the device tips the scales at just 183 grams and as a result, is among the most one-hand friendly phone in its segment. If anything, the uneven camera bump makes the device wobble when kept on a flat surface. Thankfully, you can mitigate the same by slapping the bundled TPU case on the phone. 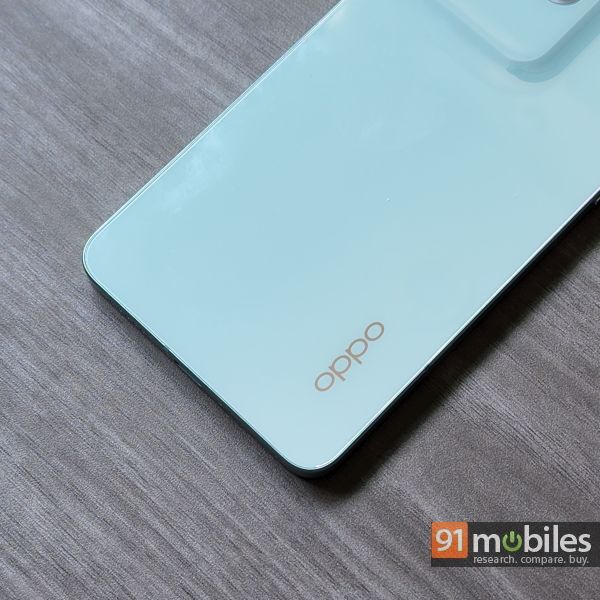 As for the I/O, the Reno8 Pro features a USB Type-C port at the bottom, along with a speaker grille. The power button and the volume rocker have been positioned on the handset’s right and left fascia respectively, with the secondary speaker nestled inside the earpiece cavity. The handset features speedy biometrics too and I didn’t come across any issues with the unit’s in-display fingerprint sensor or facial recognition tech during my stint with the phone. And, those who prefer texting over calling will find the Reno8 Pro’s X-axis linear motor to their liking as well. To wit, the feedback is tight and the vibration motor doesn’t rattle when you type quickly either. 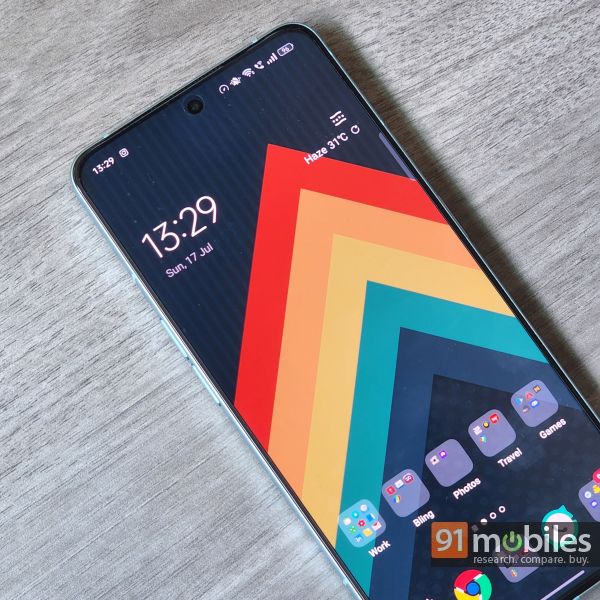 I was equally smitten by the Reno8 Pro’s display too, mind you. Spec-wise, the device features a 6.7-inch, Full HD+, AMOLED panel that can refresh at 120Hz. What’s more, unlike the recently-launched Phone (1), OPPO allows buyers to lock the display’s refresh rate at 120Hz as well. Correspondingly, you can bask in buttery smooth animations and UI transitions at all times. The icing on the cake is that the screen is bordered by extremely narrow bezels, which, when coupled with its tiny punch hole notch, paves the way for a sublime and immersive media consumption experience. 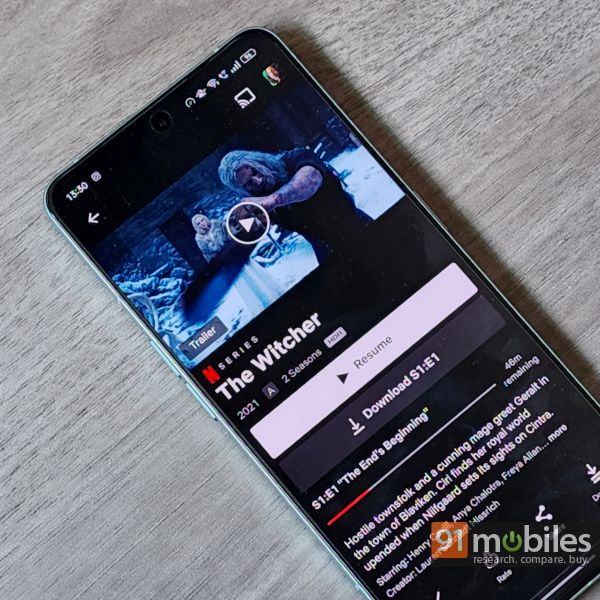 Of course, there’s no shortage of phones with a peppy AMOLED panel in the market, so how does the Reno8 Pro stand out? Well, unlike some competing devices, the Reno8 Pro can relay both, HD as well as HDR streams from OTT services like Netflix. Furthermore, the panel’s peak brightness levels aren’t too shabby at 950 nits either and you’ll find the screen plenty legible even with the sun towering above your head. I’d also like to add that the device ships with a ‘Bright HDR mode’ which automatically variates the display’s brightness whenever it detects HDR media. 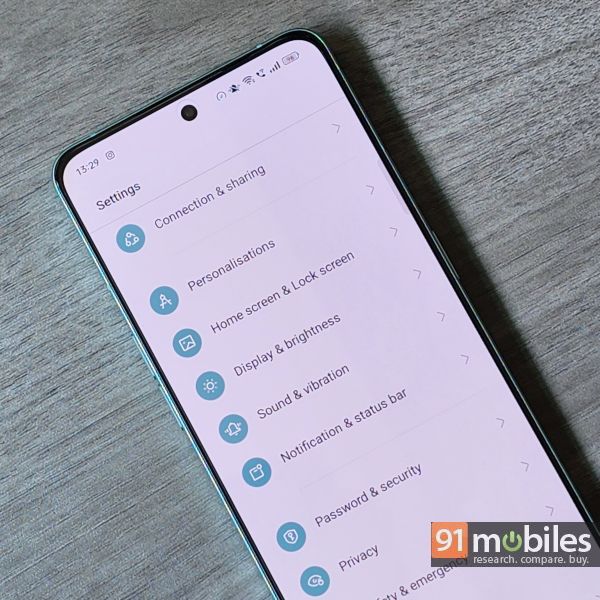 What’s more, if you don’t fancy the colours exhibited by the panel upon first boot, then you can always tweak the screen’s colour temperature by going into the display settings. You can also outfit the panel with an always-on clock face, of which you’ll find a healthy variety in the phone’s personalisation menu. Lastly, gamers will find little to complain about the panel’s 360Hz touch sampling rate as well. 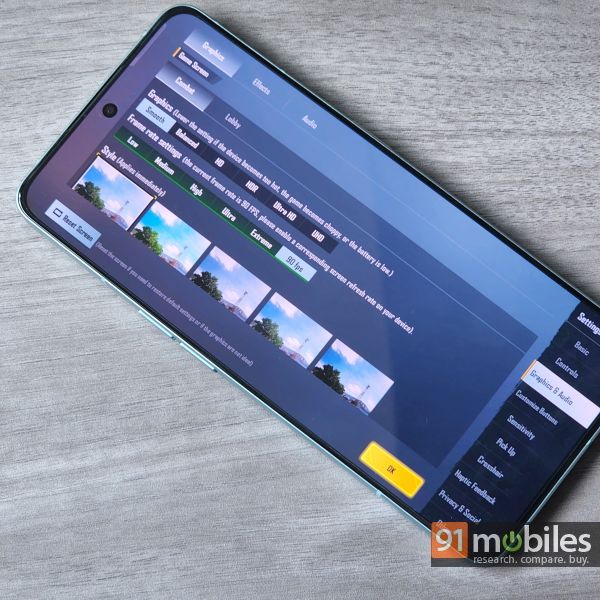 As prefaced previously, the OPPO Reno8 Pro is backed by MediaTek’s Dimensity 8100 SoC. The chipset works alongside speedy LPDDR5 memory and UFS 3.1 storage. Now, we’ve already covered the chipset’s capabilities in detail and after much deliberation, find it to be on par with Qualcomm’s high-end offerings. Unsurprisingly, the Reno8 Pro breezes through everyday tasks like browsing the web, endlessly scrolling one’s social media feed or multitasking between a dozen or so apps simultaneously. What’s more, the handset’s gaming performance impresses just as much, with the device running graphically demanding games like BGMI and Apex Legends Mobile at competent graphics and FPS settings.

To give you a better picture, the smartphone can run BGMI at HDR graphics and Ultra FPS preset respectively. Now, before you get your pitchforks out, hear me out. While the device cannot run the game at Extreme FPS (60FPS) with the graphics set to HDR, it can output 90FPS at the ‘smooth’ preset. Interestingly, I’ve seen this issue crop up on other Dimensity 8100-backed phones too. Be that as it may, the device performs admirably when playing other games. Apex Legends Mobile, for instance, maxes out at Normal graphics and Ultra FPS (60FPS) presets. You can even play the game at the ‘Original’ graphics setting, which introduces a ton of textures albeit caps the in-game FPS to Normal (30FPS). 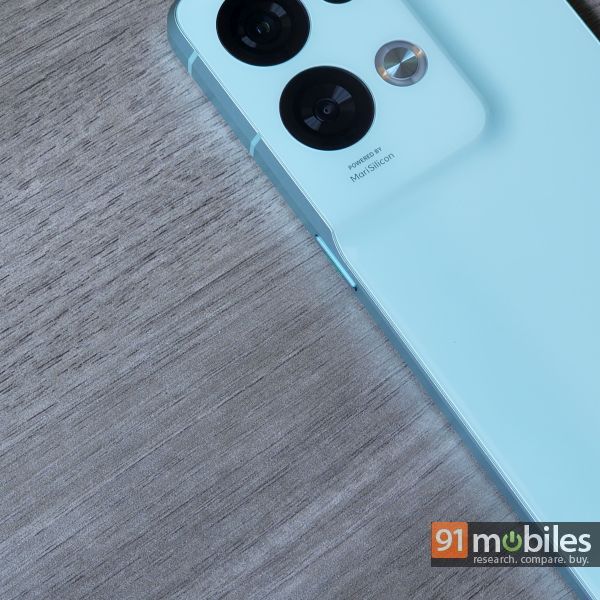 I should also point out that the phone’s performance is not plagued by any throttling issues either. The same can be accredited to the phone’s all-new Ultra-Conductive cooling solution which, per the brand, doubles the cooling area from the Reno7 Pro launched a while ago. In fact, the device sustained 84 percent of its peak performance in the CPU Throttle test and yielded 98.4 percent stability in 3D Mark’s Extreme Stress test. As for the battery backup, the smartphone’s 4,500mAh cell barely saw me through the end of a work day and I averaged around 4.5 hours of screen on time whilst daily driving the set. Thankfully, the device ships with a beefy 80W brick which can refuel the phone completely in around 25 minutes. 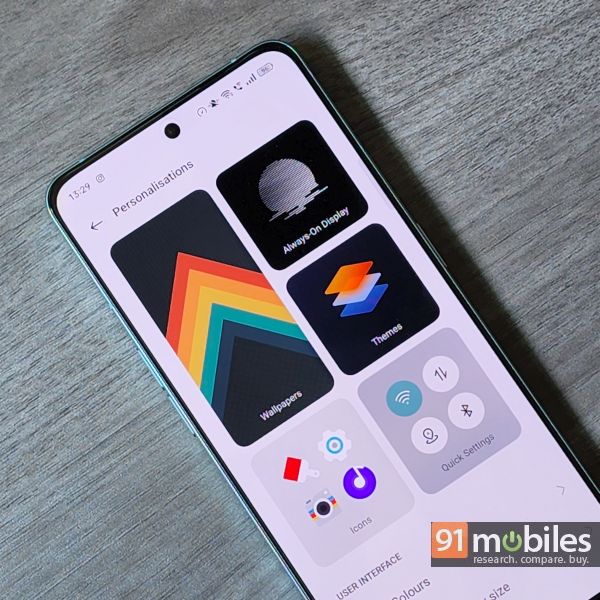 Software-wise, the Reno8 Pro ships with ColorOS v12.1 on top of Android 12. The interface is chockablock with customisation features and from changing the look of your always-on display to stylising your home screen with a third-party icon pack, you can do it all. Unfortunately, the Reno8 Pro ships with its fair share of bloatware too and you’ll spend a good chunk of your time clearing the phone’s storage of unnecessary applications. On the bright side, the utility comes with some useful tricks up its sleeve and features a built-in screen recorder along with a private vault of sorts to keep your personal files away from prying eyes. Lastly, you should know that the phone will be eligible for at least two more OS updates, along with four years of security updates. 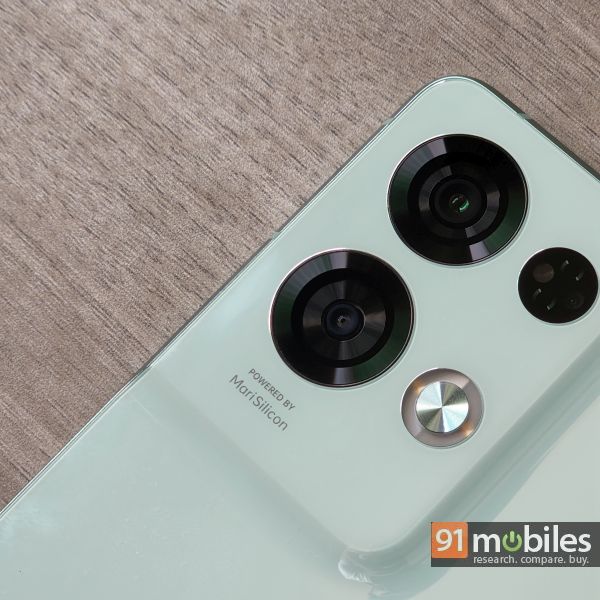 Camera-wise, the device employs the same sensors as seen on the OnePlus 10R and the Realme GT Neo 3 (review). To wit, the handset features a 50MP Sony IMX766 primary sensor which works alongside an 8MP ultrawide shooter and a 2MP macro sensor. For selfies, the handset gets a 32MP Sony IMX709 camera up front. That’s not all, as the device comes equipped with a dedicated imaging NPU dubbed MariSilicon X which, per the brand, can perform 18TOPS (Trillion Operations Per Second), thereby bettering the phone’s AI capabilities immensely. Thanks to the NPU, the device can supposedly shoot better videos at 4K resolution after the sun has set too.

Unsurprisingly, the Reno8 Pro makes for a reliable pocket-shooter and the device is plenty capable of clicking IG-ready snaps. That said, the photos tend to exhibit overly saturated colours, which is evident if you look at the daylight HDR shots I’ve attached in the gallery above. What’s more, the sensor tends to crush the shadows in a bid to output a more dramatic shot. I should also add that pixel-binned images appear a tad oversharpened at a closer crop as well. Be that as it may, the images offer adequate details and good exposure metering. The device seldom overexposed the sky and was quick to latch on to the focus as well. The sensor’s shutter speed was to my liking too and you can get away with a reasonably sharp shot of a moving subject with the phone. I will add, however, that the smartphone’s lowlight images leave something to be desired. In fact, even with the night mode utility enabled, the sensor didn’t resolve the shadows correctly. Furthermore, the images were replete with noise too. 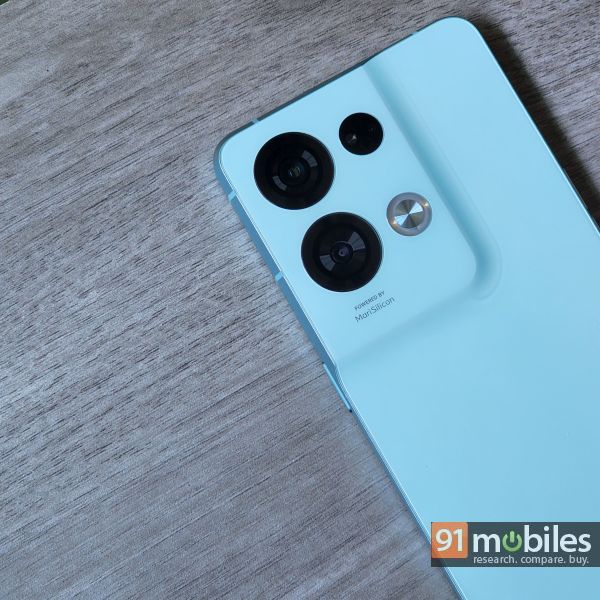 The scenery remains unchanged when you switch over to the smartphone’s wide-angle sensor too. Now, the unit offers a generous FoV of 112 degrees, however, glosses over the sharpness of subjects positioned around the periphery of the frame. Consequently, the images lack adequate corner sharpness and some elements appear a tad soft. Lastly, you can fuel your creative juices with the phone’s macro sensor which, provided you keep your hands extremely still, can overturn some good-looking photos. The handset’s 50MP mode worked well too and at a closer crop, I noticed that the device resolved buildings positioned far away quite nicely. That said, the images were a bit grainy, which is a bummer. On the bright side, the smartphone’s 32MP selfie shooter is a fantastic addition to the phone’s camera setup. To wit, the unit clicks superbly detailed images, even when the source of light is behind the subject. What’s more, with the beautification effects disabled, the smartphone clicks reasonably authentic photos as well. The same is true for the portrait selfies, which don’t just exhibit a convincing blur effect but also reciprocate the subject’s skin tone well.

Video-wise, the Reno8 Pro can record clips in up to 4K resolution at 30FPS. Disappointingly enough, the device’s main sensor doesn’t support OIS and consequently, the resulting clips appear quite jittery. That said, the company’s dedicated NPU does glamify lowlight clips and I noticed that videos shot with the AI scene enhancement feature enabled offered more vivid colours and lesser noise.

The OPPO Reno8 Pro is a competent mid-ranger and the device gets a couple of things right. The smartphone’s design, albeit a tad inspired, looks riveting and the device offers a luxurious in-hand feel as well. Furthermore, OPPO has left no stone unturned in the display and performance department either. That said, the device’s camera setup could’ve been better and I would’ve liked to see an OIS-assisted main sensor with the phone. Furthermore, while the phone charges stupendously fast, the unit’s battery backup is passable, at best. All said and done, if you don’t mind settling for a less premium design, you should pick up the OnePlus 10R, which is backed by similar specs and offers a better bang for the buck. However, buyers looking to make a splash with their next phone will find the Reno8 Pro to their liking as well.