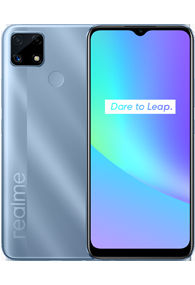 The Realme C series is the company’s salvo in the budget segment of India’s smartphone market. For a while, it did seem that the Narzo lineup was meant to replace this lineup, but the Chinese smartphone giant has reignited the C series with three new devices. Among the trio, the Realme C25, stands out with what it has to offer. Launched starting at Rs 9,999, it overlaps the Narzo 30A (review) in terms of positioning, and faces a few other strong rivals too. The question is whether the C25 has enough merit to be placed above the 30A. Let’s find out in this review. 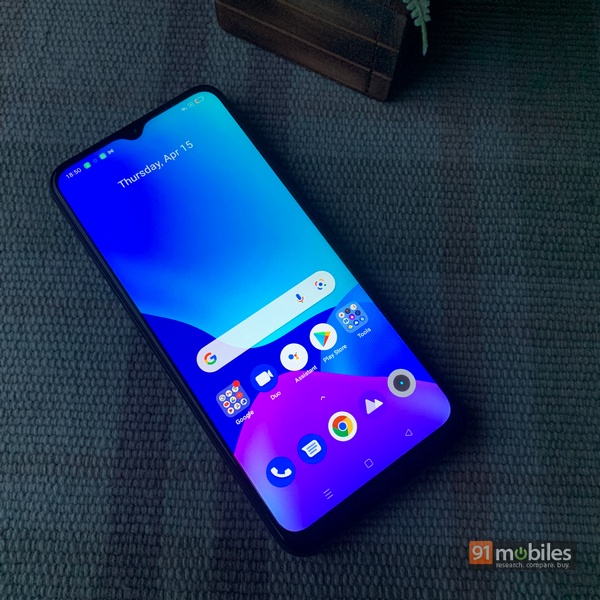 The Realme C25 is a capable phone with the kind of internals that would be welcomed by a budget user. Chief amongst them is a big 6,000mAh battery and decently fast processing. The only drawback I could see is that Realme’s Narzo 30A packs in similar specs as the C25 but retails for Rs 1,000 lower. Apart from an extra macro shooter on the C25, which I believe to be little more than a gimmick, there isn’t much to separate the two devices in terms of specs. 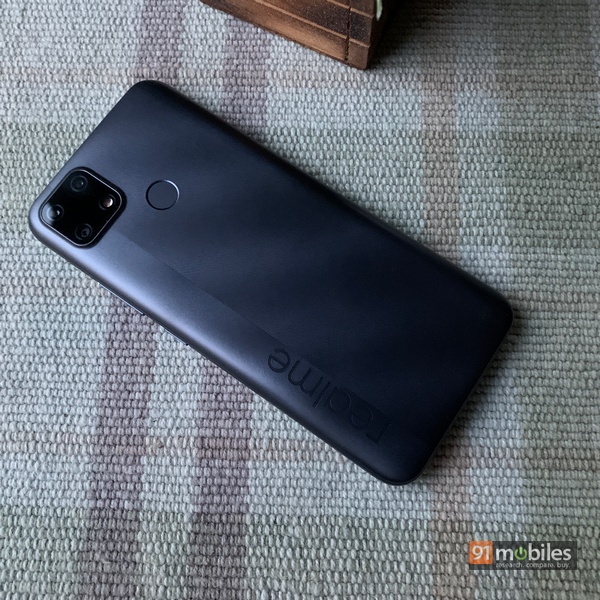 In terms of build quality and materials used, the Realme C25 is a standard budget phone with no special touches. The weight is noticeable in my hand, as is the plastic unibody which is very prone to scratches. By all other accounts, the Realme C25 is a durable device, and easy to grip too. The pattern on the back is par for the course, as is the square camera housing and the fingerprint sensor’s placement… as seen on previous C series devices. The massive 6,000mAh battery inside adds to the thickness of the phone which measures 9.6mm. The port placement on the device is standard, though thankfully, the C25 features a USB-C port, a departure from the standard micro-USB port that previous C series phones usually had. The 3.5mm headphone jack and speaker grille are on either side along with a triple-card slot on the left. The buttons are as tactile as can be expected from a smartphone of its price. Overall, I feel that Realme keeps the build quality constant on all of its sub-Rs 10,000 devices and it can be put in the acceptable category. 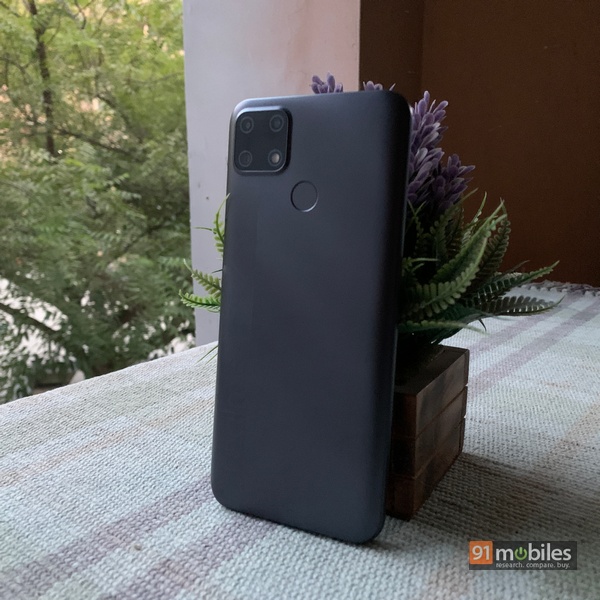 On the front, you get a 6.5-inch HD+ LCD panel which is in line with what you can expect from the device. The viewing angles are decent, while the colours are mostly good. Lack of WideVine L1 certification means that OTT content will only be available in standard definition. However, Realme claims a TÜV Rheinland certification that safeguards your eyes against harmful blue light emissions. As is expected on a budget phone, thick bezels are visible around the C25’s screen with the chin being extremely prominent, and a waterdrop notch at the top. The brightness levels on the Realme C25 are quite nice and sunlight legibility is good. The C25 has a nice display which gives the expected viewing experience although I’m slightly disappointed that the resolution isn’t FHD. 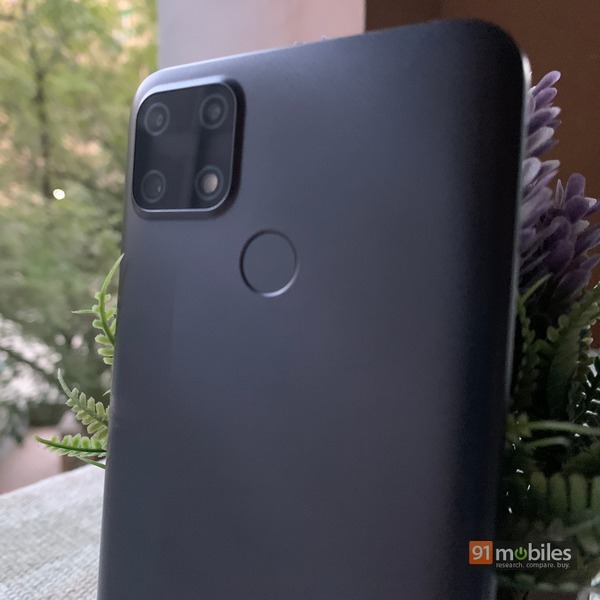 For the cameras, there is a triple-lens setup that would look familiar to users of previous phones in the C lineup. The 13MP primary sensor is supported by a 2MP macro shooter and a 2MP mono sensor. The ultra-wide sensor from the Realme C15 has been dropped, but in all fairness, seeing the quality of the sensor, it isn’t a big loss. The Realme C25 doesn’t take exceptional shots but in the budget segment, there will be few that would be better at daylight photography. Given ample light, the pictures it takes are full of colours, have slightly soft-focus, and measured saturation levels. Dynamic range isn’t great but apart from that, the Realme C25 works as a handy point and shoot camera. That is pretty much all one can say in favour of the device’s optics. The macro shooter and monochrome lens serve very little purpose. In terms of low-light, the C25 doesn’t impress, although the dedicated Night Mode present mitigates some of the concerns. Selfies from the 8MP front camera come out as good as can be expected from a budget-centric device which is to say not great. There is a touch of oversharpening but shots taken against the light are quite overexposed. Packing in an Helio G70 chipset, the Realme C25 is not out to win a lot of performance metrics especially when lower-priced devices like the Narzo 30A have the Helio G85 inside. However, one look at the benchmarks on both devices shows you that the difference is negligible. While the Realme C25 gets Antutu scores of 202,337 the Narzo 30A had a score of 202,885. The same applies when you look at Geekbench scores as well, with the Realme C25’s single and multi-core scores being 384 and 1,283 as compared to the 30A’s 351 and 1,285. In terms of regular usage, there will be very little difference between the two devices. Apps opened up at a good pace, there was no visible stuttering while scrolling through heavy apps and multitasking wasn’t an issue. Of course, any kind of heavy gaming is not going to yield satisfying results, but low-intensity game like Candy Crush and Temple Run work just fine. The phone comes with 4GB of RAM and either 64GB or 128GB of internal storage, which can be upgraded to 256GB using a microSD card. 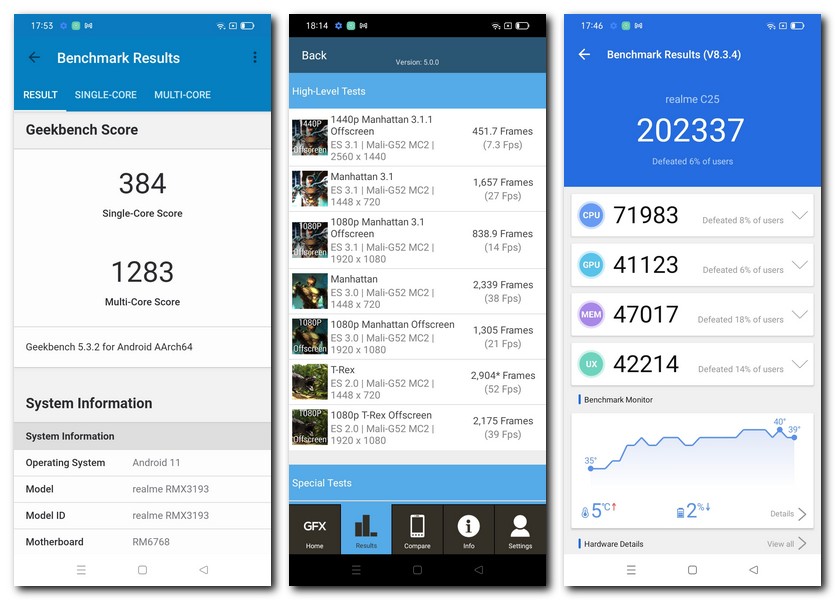 Since it’s a budget phone, it’s not too heavy on features. However, the device still offers some of the most useful ones such as a fingerprint sensor which operates reasonably fast. The speaker doesn’t sound all that great and the earpiece functions as well as expected. Using the phone on Jio’s Noida network, I did not feel any call drops or lags. On the software front, the Realme C25 comes with the company’s own RealmeUI 2.0 which is based on Android 11. The skin is reminiscent of OPPO’s ColorOS which is actually a good thing since I quite like its clean, user-friendly aesthetic. You can read about it more in my Realme Narzo 30A review. 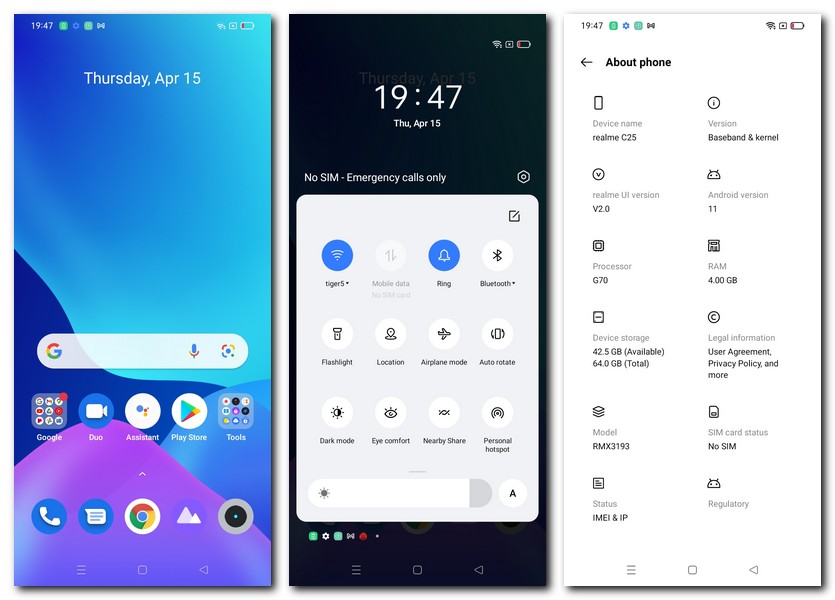 The Realme C25’s biggest USP is its large 6,000mAh battery that will easily last you a good part of two days on regular usage. It is a battery that charges at a fast 18W that allows it to be juiced up completely in about 2 hours. With my usage, I usually had about 50 percent battery remaining by the end of the day. 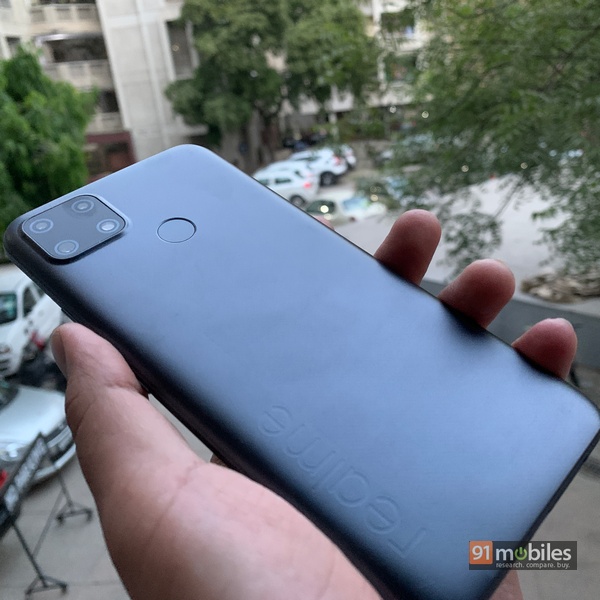 There are a few things to like about the Realme C25. The big battery is obviously its key strength, as is the comparatively fast charging speed. Display quality is average, but given the price, there’s little to complain about. I do like Realme’s software implementation, and the performance on the device should manages the user’s needs, at least as far as regular day-to-day apps are concerned. However, it is prudent to mention that nearly every single spec seen on the Realme C25 can be found on the Narzo 30A for a price that is Rs 1,000 lower. The only thing that the new phone has is the macro shooter, which I don’t see as a valuable addition. It makes me wonder why Realme would be inclined to offer the C25 when it has a perfectly serviceable device in the Narzo 30A.