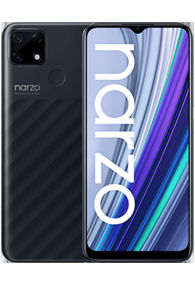 Realme certainly seems to have come a long way since the time it first entered the country. The former OPPO brand now has different smartphone lineups and has forayed into other segments like audio accessories, smart TVs and IoT devices too. The Narzo smartphone series is an attempt by Realme to stick to its budget roots, and the company has just announced the new Narzo 30A which has been launched alongside the lower mid-range Narzo 30 Pro (review). In this review, I shall focus on the 30A, which has been priced starting Rs 8,999. In a piece about the performance aspect of the device, I had concluded the phone seems great value for money. Let’s find out how good the device is in other areas of the smartphone experience. 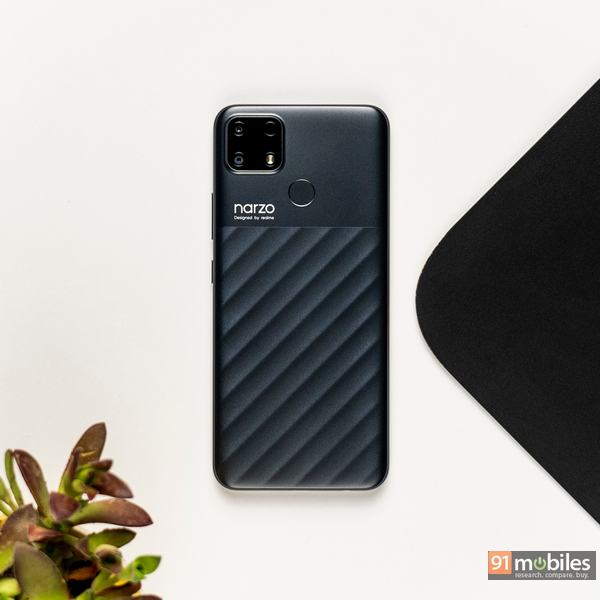 The Realme Narzo 30A is a performance-oriented device that packs in a big battery that delivers nearly two-day usage. There are some faults with the phone’s low-light photo-taking capabilities, and the design language may not be as flashy as the POCO M3 (review), but you still get your money’s worth with Narzo 30A.

Built like a typical budget device, the Narzo 30A has a thick unibody plastic construction with a textured finish on a majority of the phone’s back. You will feel its weight in your hand and that is very likely due to the beefy battery housed inside. The sides curve gently for an easier grip but even so, like most of smartphones nowadays, the 30A can’t be used one-handed. There is a dual-camera system in a square housing on the rear that sits quite flush with the body, and just beside it is the fingerprint scanner. The buttons on the side are clicky and tactile with good response, and on the bottom is a USB-C port which is refreshing to see in the budget range. Along with that are the standard 3.5mm headphone jack and speaker grille. The Narzo 30A is a device that will not win many awards for craftmanship but it is certainly built to last. 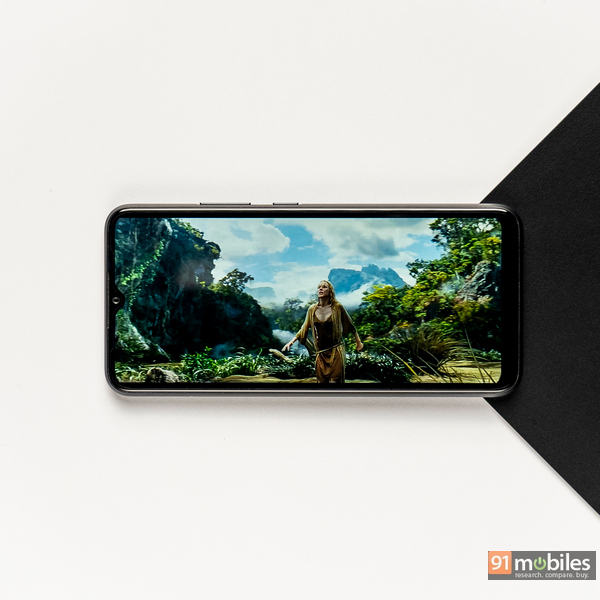 Coming to the front of the phone, you get a standard HD+ IPS LCD panel which measures 6.5-inches in size and has a claimed 88.7 percent screen-to-body ratio. The top of the screen sports a waterdrop notch and has chunky bezels on the side, something which is to be expected in this segment. Apart from being slightly saturated, the screen itself is quite nice with a healthy amount of brightness (about 560nits) for outdoor usage. There is no high refresh rate to talk about, but given Realme’s reputation, we should see the under Rs 10,000 segments getting it soon on future offerings from the brand. Some amount of colour shift is apparent when looking at the panel from an angle, but overall the device offers a very good viewing experience for the price. Unfortunately, the lack of WideVine L1 certification means you can only enjoy OTT content in SD (standard definition). 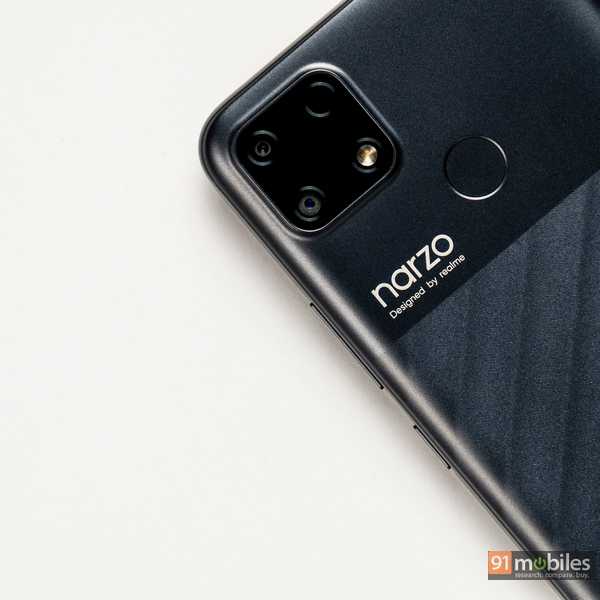 As far as optics go, the phone has a 13MP primary shooter with an f/2.2 aperture along with a 5MP B&W shooter. On the front is an 8MP selfie camera that is housed in the notch. Camera performance is not a budget phone’s strong suit but the Narzo 30A works reasonably well under sufficient lighting. Here’s a short summary of my camera experience with the device. 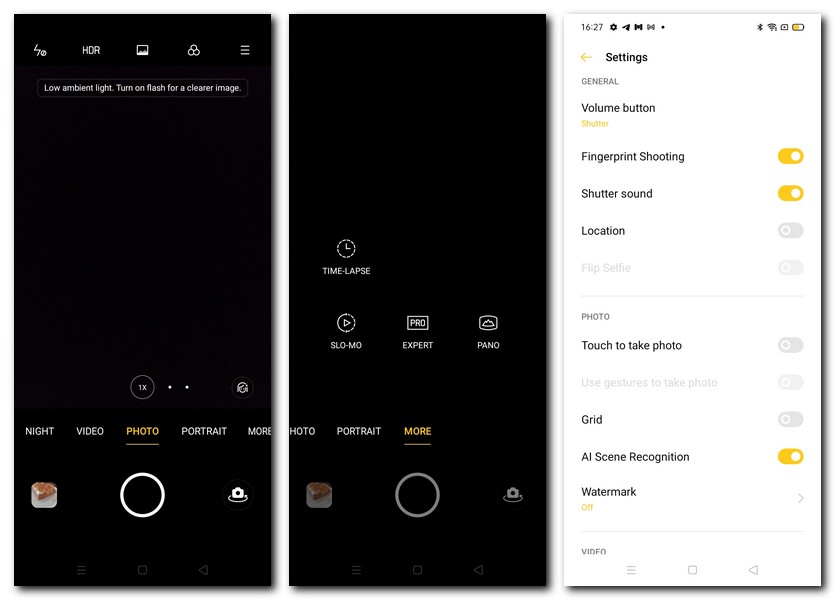 The Realme Narzo 30A is powered by the MediaTek Helio G85 chipset which places a special emphasis on GPU performance. Even with CPU-oriented tasks, the G85 is on par with competing Qualcomm Snapdragon 662 smartphones. Benchmarking scores show this to be the case as well with the Narzo 30A delivering a respectable score of 204,995 on Antutu. 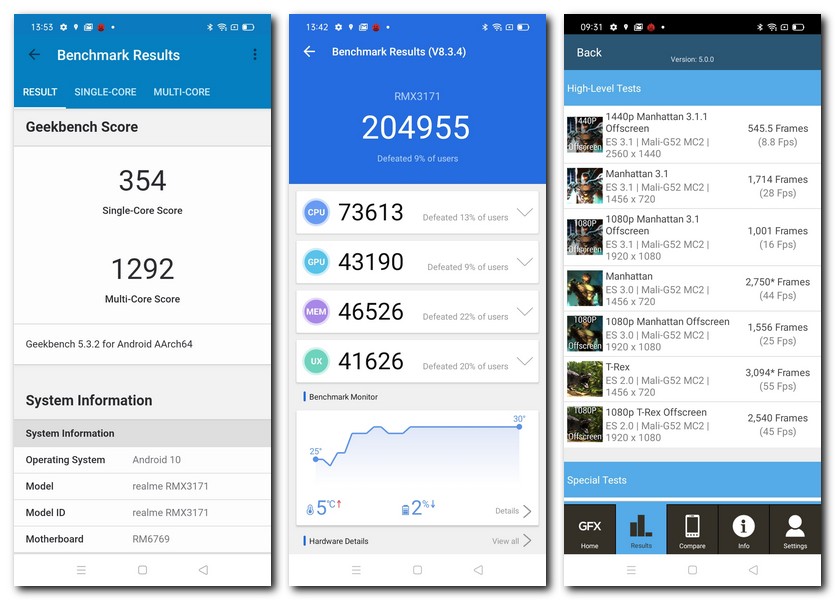 You are also not going to face any major hurdles during the normal day-to-day tasks of operating the phone. You get 4GB of RAM on the device along with 64GB of internal storage which can be expanded using a microSD card. I wouldn’t place a lot of heavy gaming load on the phone even though the chipset is said to be specifically designed for it. While something like a Call of Duty Mobile would run easily at good graphics settings, the phone does start to stutter and lag after an hour or so. Any low-end gaming titles should run quite fine. 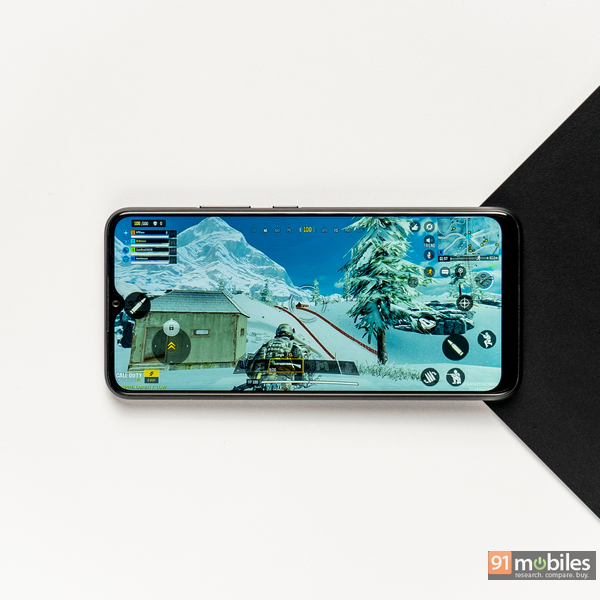 As for the capacitive fingerprint reader, it works extremely fast and is accurate enough for my liking. Speakers aren’t that great and lack depth, but wired earphones provide a decent audio experience. Apart from this, the network quality (based on my usage with the Jio network in Noida) and earpiece quality was up to the mark as well. 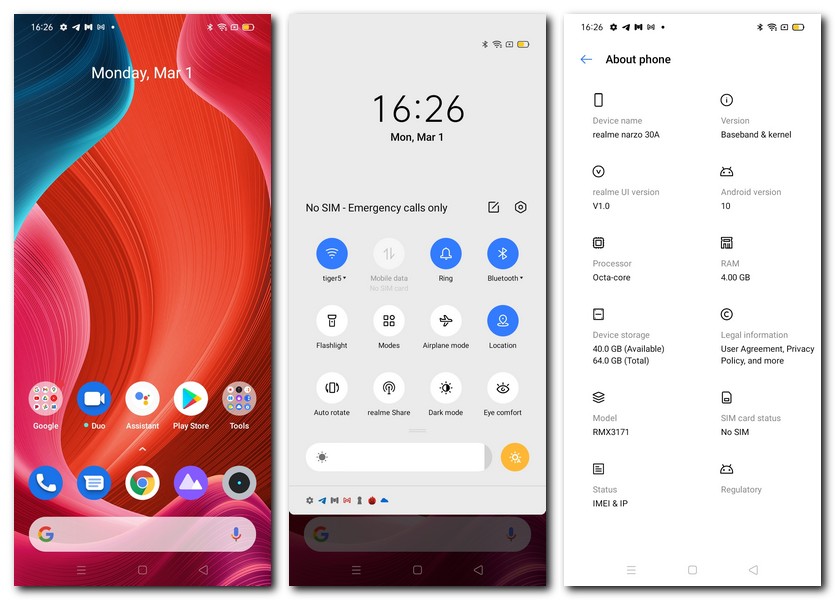 On the software side of things, the phone uses the Realme UI which is based on Android 10. You can head here for a more detailed explanation of the software UI. In short, ease of use and regular software patches are its strong suites but it does come with a fair bit of bloatware. 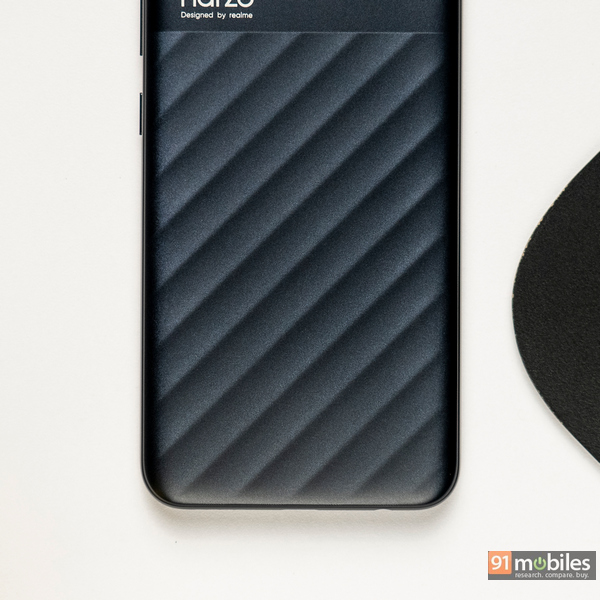 You get a 6,000mAh battery in the device… something which seems to be slowly coming par for the course for budget phones nowadays. The battery is supported by 18W fast charging which can juice up the phone fully in a little over 2 hours. Of course, thanks to the high-capacity battery, the Narzo 30A can last for a long time off a single charge. Without putting too much stress on the processor, it is quite normal to see the phone last through two days of usage. For media consumption, the phone can last for upwards of 20 hours in terms of watching YouTube. I got screen-on time in the range of 7 hours during my review period, which is quite impressive. 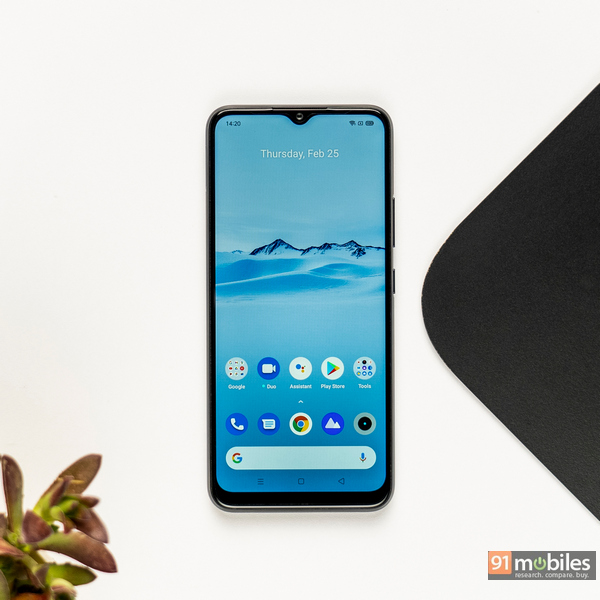 For a starting price of Rs 8,999, not too many phones can deliver the kind of performance I have seen on the Narzo 30A. The device also packs in a big battery and can easily last you a while before you need a top-up. You also get a reasonably bright display and the transition to a USB-C port is most welcome. The only aspect where it misses out is the camera performance, especially at night. Design-wise too, the Narzo 30A won’t be turning any heads. Even so, if you are looking for a performance-oriented smartphone with great battery life on a budget, then the Narzo 30A should be at the top of your consideration list.