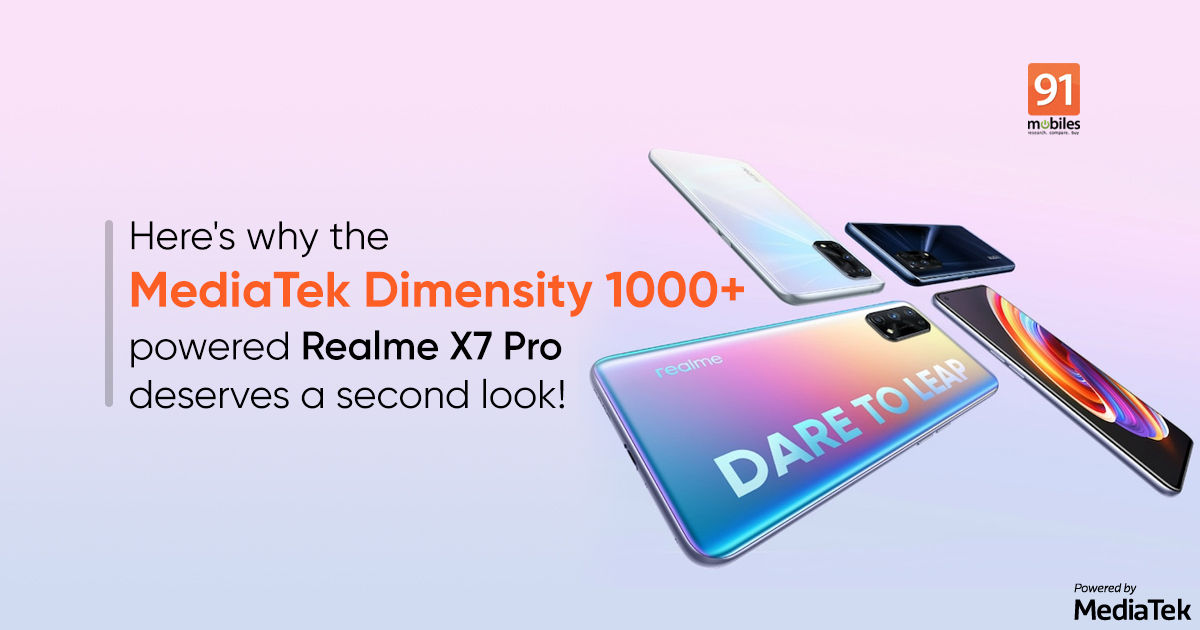 Since its debut in India, Realme has become one of the top smartphone OEMs in the country. Year after year, the brand has put forth compelling offerings but in 2021, the brand is taking things to a whole different level. Yes, we are talking about the all-new Realme X7 Pro which brings with it flagship-grade features, yet grabs a quintessentially mid-range price tag. Suffice it to say, the X7 Pro is a compelling phone, but what sets it apart from the herd of other devices is MediaTek’s flagship-tier Dimensity 1000+ chipset, which delivers superior performance, among other things. Let us give you a thorough look at what the Realme X7 Pro brings to the table.

The Realme X7 Pro’s window to the world is a 6.55-inch Super AMOLED panel with Full HD+ resolution and a peak brightness of 1,200 nits. What’s more, thanks in no small part to the diverse feature-set offered by the MediaTek Dimensity 1000+ chipset, the phone can deliver a speedy 120Hz refresh rate too. Moreover, it also boasts of a 240Hz touch sampling rate that will give buyers a huge advantage during frenzied gaming sessions.

Coming to the meat of the matter, the MediaTek Dimensity 1000+ SoC powering the Realme X7 Pro has been built using the 7nm EUV manufacturing process, which guarantees improvements in performance as well as battery efficiency. The chipset comes with an integrated 5G modem that’s capable of dynamically switching between low and high bandwidths depending on the apps that are running. As a result, a Dimensity 1000+ backed handset can save up to 32 percent of battery life. 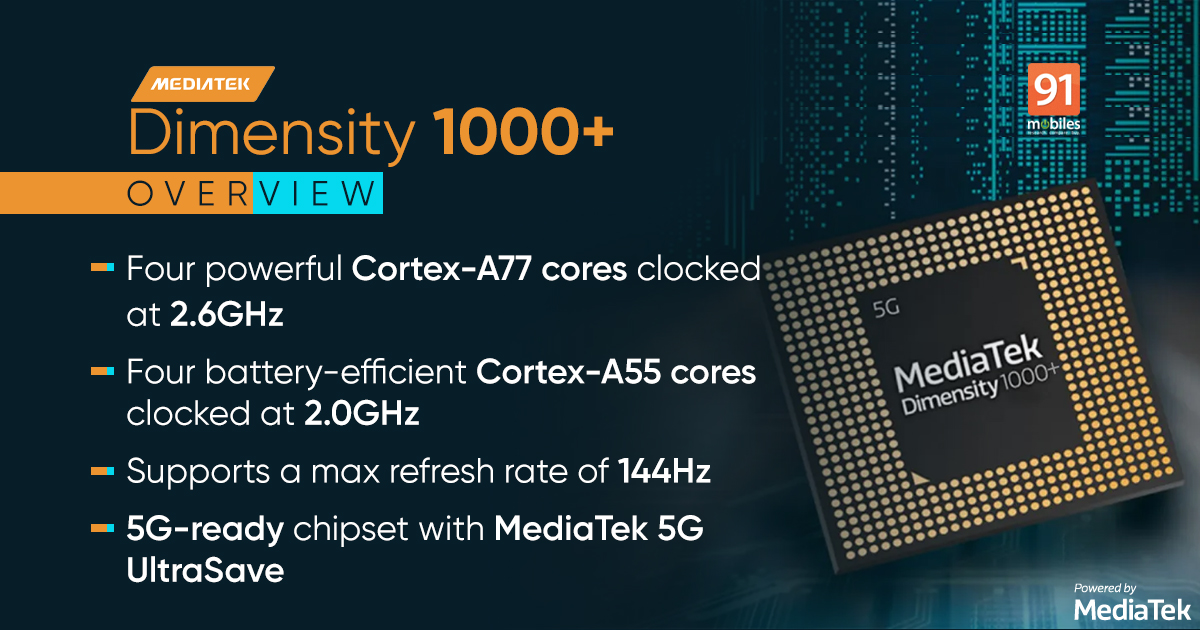 Specs-wise, MediaTek has populated the Dimensity 1000+ SoC with four high-performance ARM Cortex-A77 cores clocked at 2.6GHz and four ARM Cortex-A55 efficiency cores clocked at 2GHz. Moreover, the graphics are being handled by a 9-core Mali G77 MP9 GPU. Suffice it to say, you should expect nothing short of blazing-fast performance, irrespective of the task at hand. In fact, gamers on the lookout for a new phone should consider the Realme X7 Pro, thanks to the sheer amount of computing power that’s packed inside the handset.

Speaking of that, gaming enthusiasts will also be pleased to know that the MediaTek Hyper Engine 2.0 gaming technology has made its way to the Realme X7 Pro too, which doesn’t just help load the game quicker, but it also paves way for a low-latency connection to the servers. For the uninitiated, the company originally unveiled MediaTek HyperEngine gaming technology with its Helio G-series of processors and the feature was a roaring success among gamers as it bettered the gaming experience drastically. Coming to the memory, the X7 Pro ships with 8GB of RAM and 128GB of UFS 2.1 storage with Turbo Write technology. Rest assured, the internal hardware of the Realme X7 Pro is all set to give serious competition to the other players in its price category.

The Realme X7 Pro ships with a quad-camera setup towards the back and features the Sony IMX686, 64MP sensor with an f/1.8 aperture as its main lens. The primary shooter is accompanied by an 8MP ultra wide-angle camera, a 2MP portrait camera, and a 2MP macro camera. Consequently, no matter what the scene is, the Realme X7 Pro ensures you are always prepared to capture it in the best way possible. Furthermore, the presence of the 5-core Imagiq ISP on the MediaTek Dimensity 1000+ chipset lends the Realme X7 Pro dedicated hardware accelerators for HDR imaging, paving way for stunning photographs.

While the front of the Realme X7 Pro is glorified by its seamless edge-to-edge display, the rear surface benefits from a dazzling appearance owing to the company’s use of a “double grain, double plating” technology. This results in some truly vivid colours popping out of the gradient rear surface. That said, the phone is also a treat to hold thanks to its 8.55mm thickness and its 184gm weight. Buyers also get dual-stereo speakers with Dolby Atmos certification for utmost immersion, along with a snappy in-display fingerprint sensor for biometric authentication.

On to the battery life, and here the Realme X7 Pro makes use of a 4,500mAh cell that is enough to keep it going for an entire day without the need to charge the handset again. In fact, the phone can keep playing videos for 15 hours on the trot before requiring a top up. That being said, should the smartphone run out of juice, you will be able to charge it back to 100 percent in a jiffy. This is made possible owing to the phone’s 65W Super Dart Charge technology that can completely charge the handset in just 35 minutes. 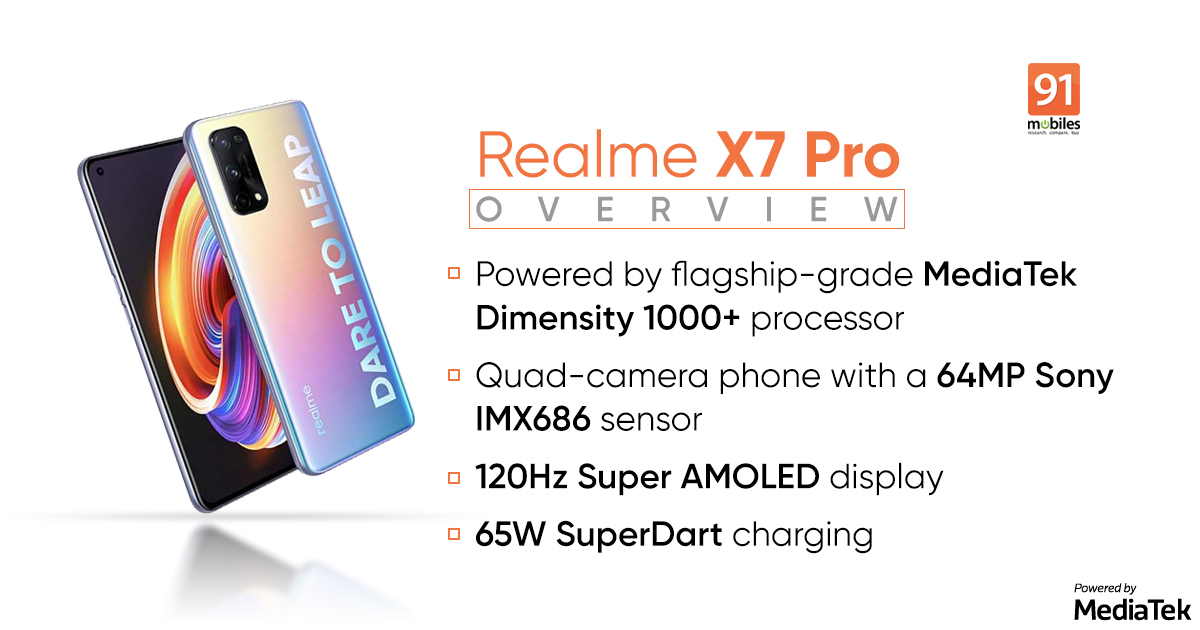 With all these amazing features onboard, it’s needless to say that at just Rs 29,999, the new Realme X7 Pro is a must-buy for anyone in the market for a mid-range smartphone right now. Its top-notch hardware, which is highlighted by the MediaTek Dimensity 1000+ chipset is unmatched at this price point. The only real question is – which colour will you pick the phone in?