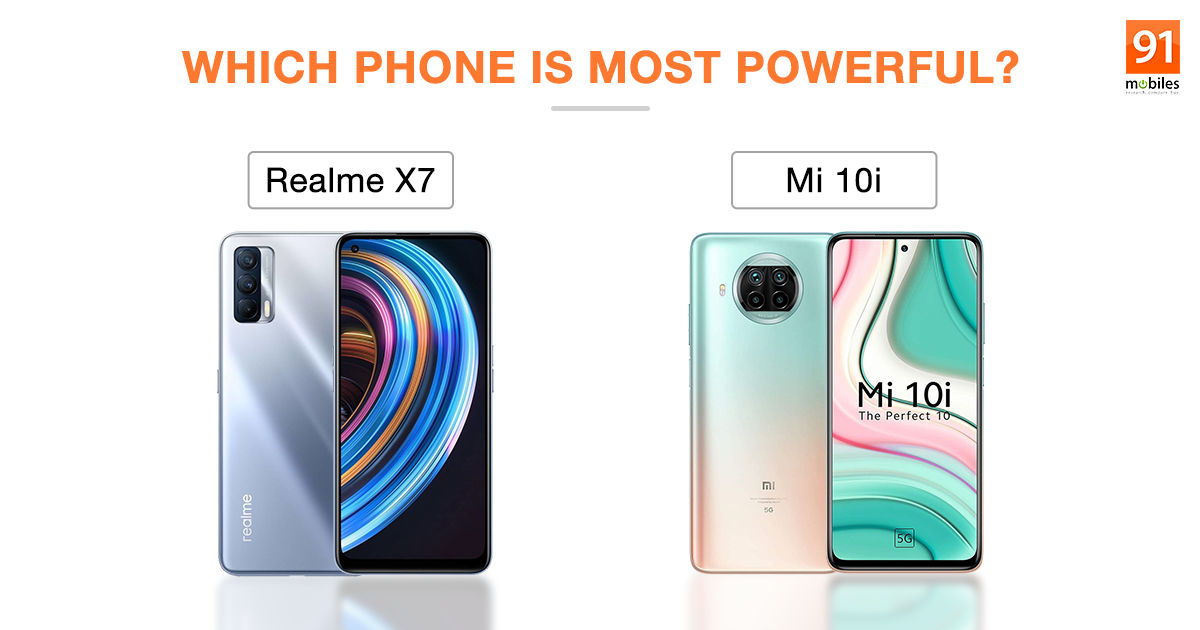 Chinese smartphone giant Realme has just announced two new smartphones in the Indian market in the form of the Realme X7 Pro (review) and the Realme X7 (review). One of the big talking points for both smartphones is the inclusion of MediaTek’s new Dimensity chipsets. It has become increasingly apparent that the Taiwanese silicone maker has been swinging for the fences as of late in the world of smartphone computing. The Realme X7 Pro is powered by MediaTek’s flagship Dimensity 1000+ chipset making it the second phone in India to house the SoC after the OPPO Reno5 Pro (review). The Realme X7, however, marks the Indian debut of the Dimensity 800U chipset which is squarely placed to tackle Qualcomm’s upper range Snapdragon 700 series. I have reviewed the Realme X7, and the CPU performance has me quite impressed. You 800U is built on Arm’s proprietary big.LITTLE architecture that utilises two performance Cortex A76 cores with a max frequency of 2.4GHz and six efficiency Cortex A55 cores that can go up to 2GHz. The only way to be sure of the Realme X7’s performance is to compare it with a similarly-priced Qualcomm-powered smartphone. Now the Xiaomi Mi 10i (review) happens to use the recent Snapdragon 750G which also has some impressive performance attributes. In this comparison, I will be testing the Realme X7 against the Mi 10i on the basis of benchmarks and their ability to run Call of Duty: Mobile. 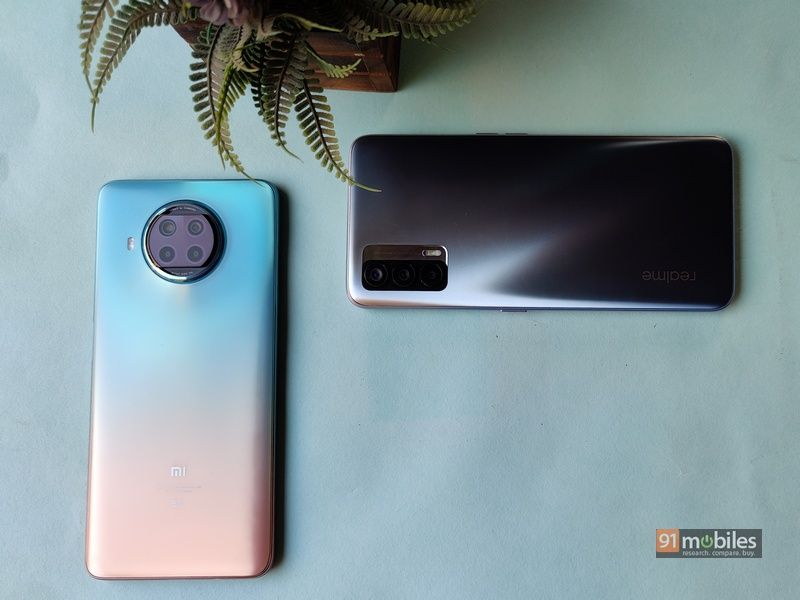 While benchmarks are not a sure-shot way of determining a phone’s processing prowess, they do give you an indication of its capabilities. The are several quite popular synthetic tests available on the market but I will be focusing on the four major ones which are Geekbench 5, AnTuTu, GFXBench, and 3DMark. The variants of both phones on test are their maxed-out versions offering 8GB RAM and 128GB internal storage, so the tests remain fair.

The scores on Geekbench 5 indicate how good a chipset’s CPU performance is in terms of single-core usage and multi-core usage. The Snapdragon 750G also uses Arm’s big.LITTLE architecture with two high-performance Cortex A77 cores that come with the new Kryo 570 CPU along with six efficient Cortex A55 cores. However, the Dimensity 800U is made using TSMC’s 7nm manufacturing process while the 750G uses an 8nm process. For the uninitiated, 7nm and 8nm are the sizes of the transistors being used on the chipset. The smaller the transistor, the more you can pack on a chipset, and the better the performance and efficiency. When running the benchmarks, on the Realme X7 I got scores of 597 and 1,789 for single-core and multi-core respectively while the Mi 10i logged 659 and 1,999 respectively. It’s clear that the 750G’s new Kryo 570 does edge out the slightly older Cortex A76 on the 800U although the latter’s smaller manufacturing helps bridge the gap.

On AnTuTu, we get an overall score that takes into account, among other things, how good the GPU and AI performance of the chipset is. Realme had prided itself on the X7’s AnTuTu score, so much so that it was one of the headlining points during the phone’s launch presentation. The company has claimed a 340,000+ overall score and in reality, Realme is quite close. On my unit of the X7, the overall score was 335,217 which is just a shade higher than the Mi 10i’s 328,730. An interesting thing to note here is that the GPU score on the Realme X7 is 90,392 which is very much ahead of the Mi 10i’s 77,079.

For a clearer understanding of the GPU functionality, there’s GFXBench and 3DMark. Let’s first look at the former which has two synthetic tests that are quite popular ie. T-Rex and Manhattan. The resultant score comes in the form of an fps count that is calculated by the number of frames generated for the duration of the test. While the Realme X7’s screen refresh rate caps at 60Hz, the Mi 10i can go up to 120Hz. For that reason, I set the Mi 10i screen refresh rate to 60Hz for a comparable test result. The Realme X7 and the Dimensity 800U powering it scored 48fps on Manhattan while T-Rex saw 59fps. In comparison, the Mi 10i gets 40fps and 50fps on the tests respectively. It does become clear that the Mi 10i’s Adreno 619 GPU’s graphical performance falls short of the Realme X7’s Mali G57.

3DMark’s Slingshot Extreme test runs the phone’s GPU through the metaphorical ringer. It is quite a viable metric of how well a device can handle intense graphical situations. As expected, the Mi 10i comes up short, with an overall score of 2,754 as compared to 3,117 on the Realme X7. To be doubly sure about this, I also ran the Wild Life test on both the devices and the overall score gap is even more. For the Realme X7, I got a score of 1,592 and on the Mi 10i, the score was 1,098… nearly two-thirds of the X7.

From these benchmarking tests, two things are quite clear. The MediaTek 800U is no slouch as far as CPU performance and multi-tasking is concerned, even though the Snapdragon 750G has the advantage of the newer Kryo 570. However, on the graphics side, 800U’s Mali G57 constantly outperforms the Adreno 619 on 750G. Let’s find out what the gaming comparison shows.

The unfortunate ban on PUBG Mobile (PUBG) last year leaves us with the next best option to test gaming capabilities, which is Call of Duty Mobile (CoDM). From a reviewer’s perspective, CoDM does not stress out the chipset as much as PUBG. Even so, comparing the graphica settings that are allowed, the battery level that gets depleted, and how hot the device gets while running CoD should give us a decent idea about the chipset’s graphics performance.

Looking initially at the settings the game was able to run, I was surprised to see a poor selection on the Dimensity 800U. It appears that the game is only capable of displaying Medium Graphics Quality (GQ) while the Frame Rate (FR) option could only go to High. These are options that are usually seen for budget devices and not mid-range ones. During my initial review period, there were quite a few frame drops, occasional stuttering in gameplay, and overall poor graphics. However, there has since been an update for the game, and almost all problems look to be resolved. You still see the same GQ and FR options present as before but when you actually start the game there have been big changes. Now you are getting a healthy 60fps maintained constantly while the graphics represent pretty much what you would see if you had set GQ at High. On the Mi 10i, I was able to set the GQ set at High while the FR was at Very High.

From my perspective, it did feel that the gameplay on the Realme X7 was a bit smoother than the Mi 10i. One thing I was sure of was the power efficiency of the X7. At the start of my 30-minute gaming session, I had set the maximum possible graphics that the Realme X7 could support, ensured 100 percent battery, and noted the battery’s temperature of 26 degrees. The Mi 10i was also at max possible graphics settings, 100 percent battery, and a battery temperature of 25 degrees. After gaming on both devices, the Realme X7 had drained by about 14 percent while the temperature had risen by about 11 degrees. The Mi 10i’s battery on the other hand, was drained by 20 percent while the rise in temperature was 16 degrees. Brightness levels for both the phones were at maximum while the screen refresh rate for the Mi 10i was set at 60Hz.

For quite a while, Qualcomm chipsets seemed to be strong options while referring to Android smartphone performance across different price tiers. MediaTek has definitely changed that perception with the Dimensity series. Inside Realme’s own camp, one can see that the Realme X7’s Dimensity 800U is better in every performance metric than the Realme 7 Pro’s Qualcomm Snapdragon 720G which sells at the same price. The Snapdragon 750G-powered Xiaomi Mi 10i does have a slight edge in processing though. However, the Realme X7’s GPU performance is quite impressive. I personally am quite excited to see the next round of Dimensity chipsets arriving in the Indian market. It would put more pressure on Qualcomm to outperform MediaTek and this competition will ultimately be very beneficial to the end-user.