To say that Xiaomi sparked a frenzy around smart TVs in India would be an understatement. The Chinese tech giant entered the smart TV market in 2018 and to date, has sold over five million sets in the sub-continent, which is no mean feat. That being said, despite laying the grassroots for affordable TVs in India, the company is undergoing a significant change and is trying to revamp its image as a premium tech brand. To that note, Xiaomi announced its first high-end QLED TV in the country back in December and recently, handed over the reins of its affordable TV business to its subsidiary Redmi. And, that brings us to the topic at hand as recently, Redmi announced its X-series of 4K HDR TVs in India, comprising the X50, X55, and X65 TV sets. I managed to get my hands on the 4K Ultra HD HDR X55 variant and here’s what I make of it.

The Redmi Smart TV X55 doesn’t stand out in terms of design and looks the part of most affordable TV sets. To that note, the unit features a plastic chassis with some metal accents thrown in here and there. Correspondingly, unlike the pricier Mi TV QLED 4K, it’s unlikely that the Redmi TV X55 will double up as a statement piece, or elevate the aesthetics of your living room. Thankfully, the chassis is quite robust and at no point during the installation or my review period did I find the Redmi TV X55 to be flimsy – the panel has been tidily positioned within the frame, the footrests are sturdy and the back of the set is void of any flex either. What’s more, the TV is void of branding, at least on the front (barring the minuscule Redmi logo) which is a ‘smart’ move by the company as it removes any unnecessary distractions whilst watching movies on the unit. 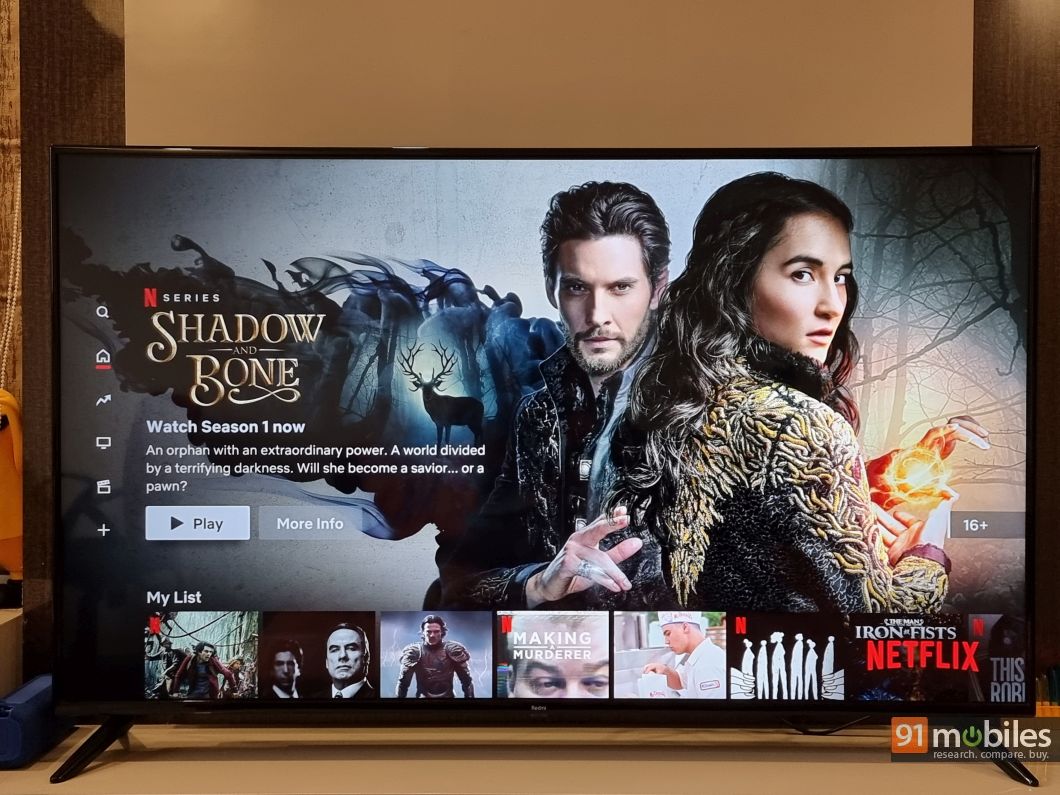 I’d also like to commend the brand for positioning the most sought-after ports towards the sides on the back, thereby making them easier to access should you wall-mount the TV. Speaking of which, the Redmi TV X55 4K ships with a bevy of connectors including three HDMI 2.1 ports (one of which supports eARC), a 3.5mm audio jack, an ethernet port, two USB Type-A connectors, and optical and AV inputs. What’s more, the TV can connect to both, 2.4GHz as well as 5GHz Wi-Fi networks, which is great. 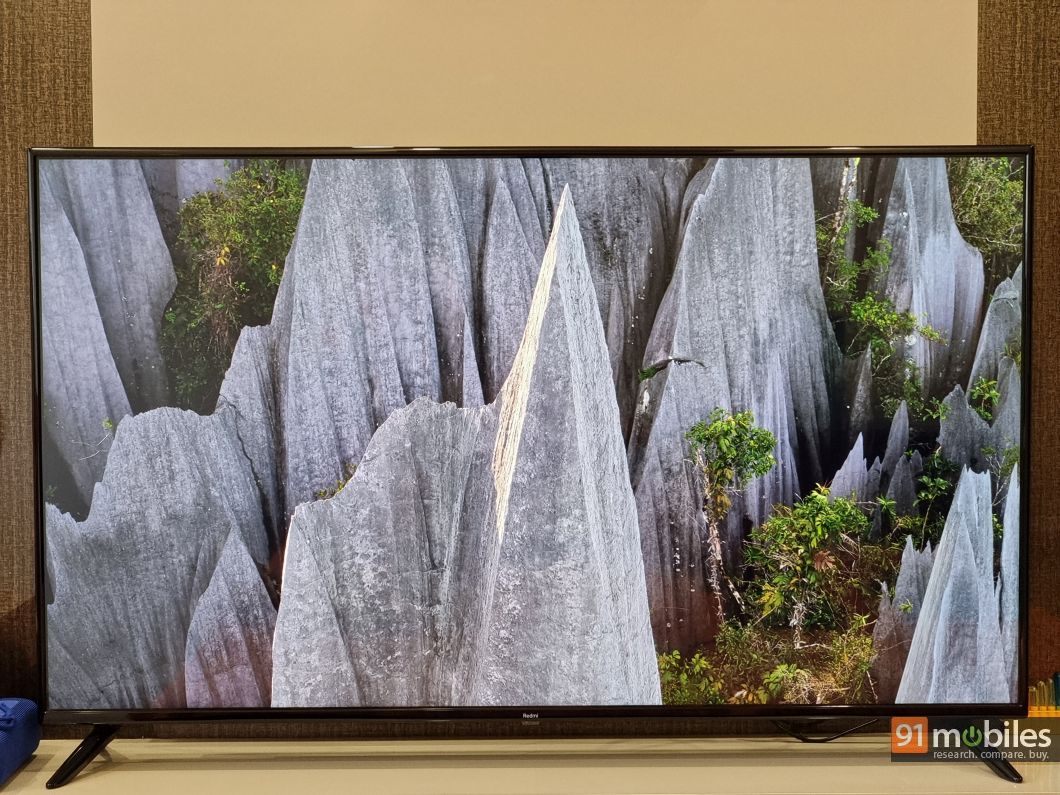 Coming to the meat of the matter, the Redmi TV X55 is backed by a 55-inch, 4K panel which comes with support for various HDR standards including HDR10+, HLG as well as Dolby Vision. As far as the picture quality is concerned, I am happy to report that the Redmi TV X55 punches above its weight, at least for HDR media. I watched all three seasons of Formula 1: Drive to Survive on the set which has been shot in Dolby Vision and I was in awe of the colours outputted by the panel. The picture quality was extremely sharp too and while the blacks or the darker parts of a scene appear greyish, for the price, it doesn’t get any better. What’s more, the bezels surrounding the display aren’t too distracting either and from a distance, I barely noticed them whilst watching movies or shows. 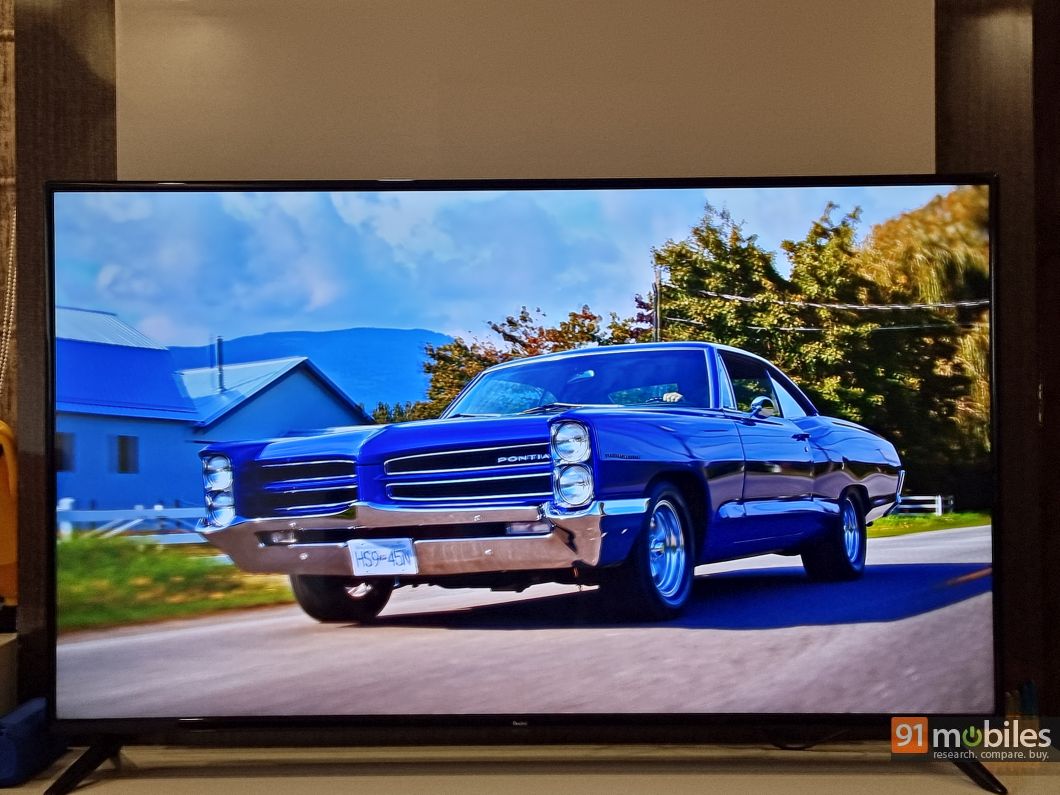 In terms of content upscaling, the Redmi TV X55 still has ways to go and there was noticeable graininess when I was watching reruns of Office on the set. The skin tone of human subjects felt a bit off too, however, I managed to offset that by reducing the saturation level from the settings menu. Similarly, the motion smoothing was a tad too strong for my liking and while it does mitigate blur in fast-paced action flicks as well as when you’re watching your favourite football team play, the footage feels – for the lack of a better word – accelerated. Thankfully, as prefaced previously, the Redmi TV also lets you finetune the video quality on the fly by long-pressing the media hotekey on the remote. In doing so, the TV will bring up a set of useful prompts which you can use to variate the backlit levels, saturation, the works. 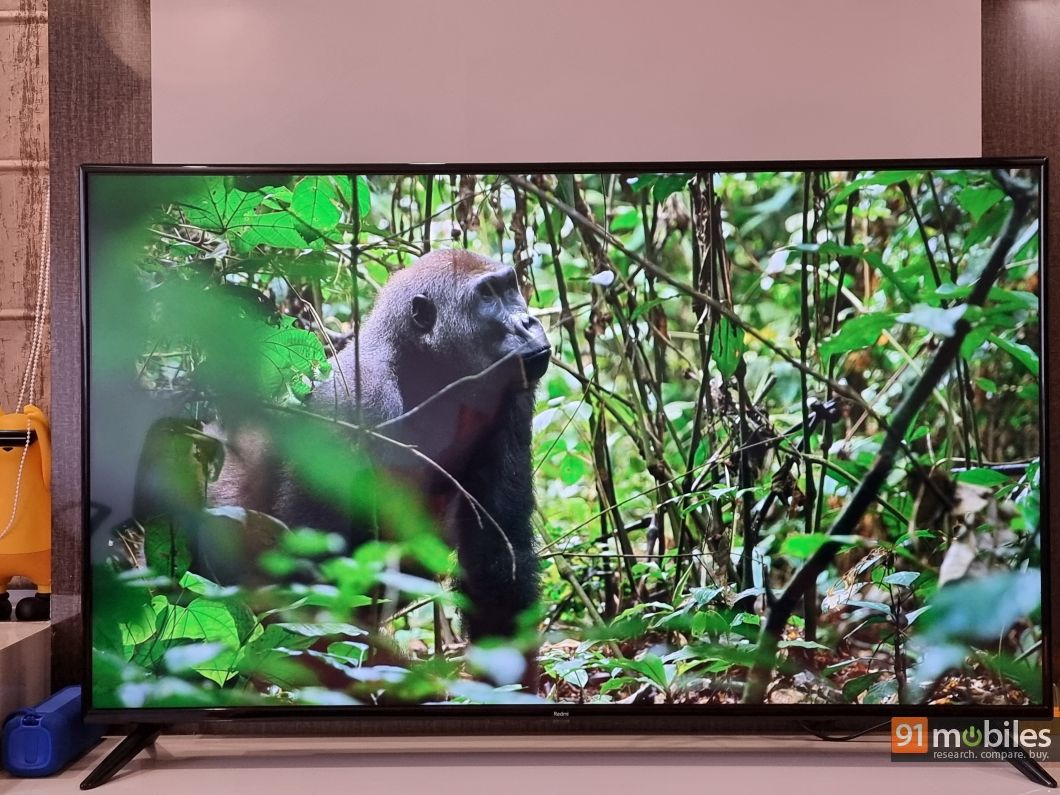 Moving on, the panel offers satisfactory brightness levels too, so you should be able to view the content on the screen comfortably, even in a well-lit room. The viewing angles were to my liking as well and I didn’t notice any discolouration when looking at the screen off-axis, which is great. As for the audio output, the Redmi TV X55 ships with a pair of 15W speakers that have been tuned really well – the pair gets quite loud and offers exceptional clarity too, especially when watching movies and videos. Correspondingly, you won’t have to splurge on a soundbar when you buy the Redmi X55 4K TV. 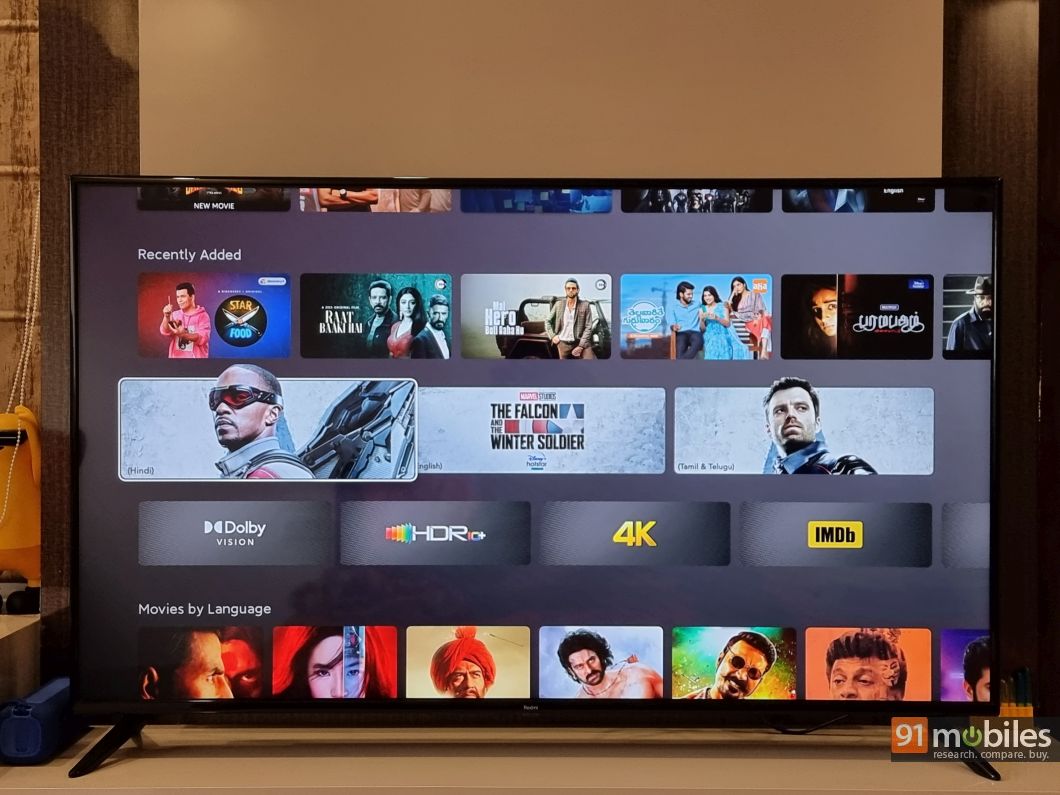 Powering the ‘smarts’ on Redmi’s latest offering is a MediaTek quad-core processor that has been paired with 2GB of RAM and 16GB of built-in storage. The TV’s core specs are good-enough for everyday use and I didn’t run into any performance-related issues during my stint with the unit – apps opened quickly, voice commands worked efficiently, and jumping between the TV’s different interfaces was a smooth experience too. Speaking of which, much like most other TVs from Xiaomi’s stables, the Redmi TV X55 also boots Android TV 10, along with the company’s proprietary PatchWall OS. 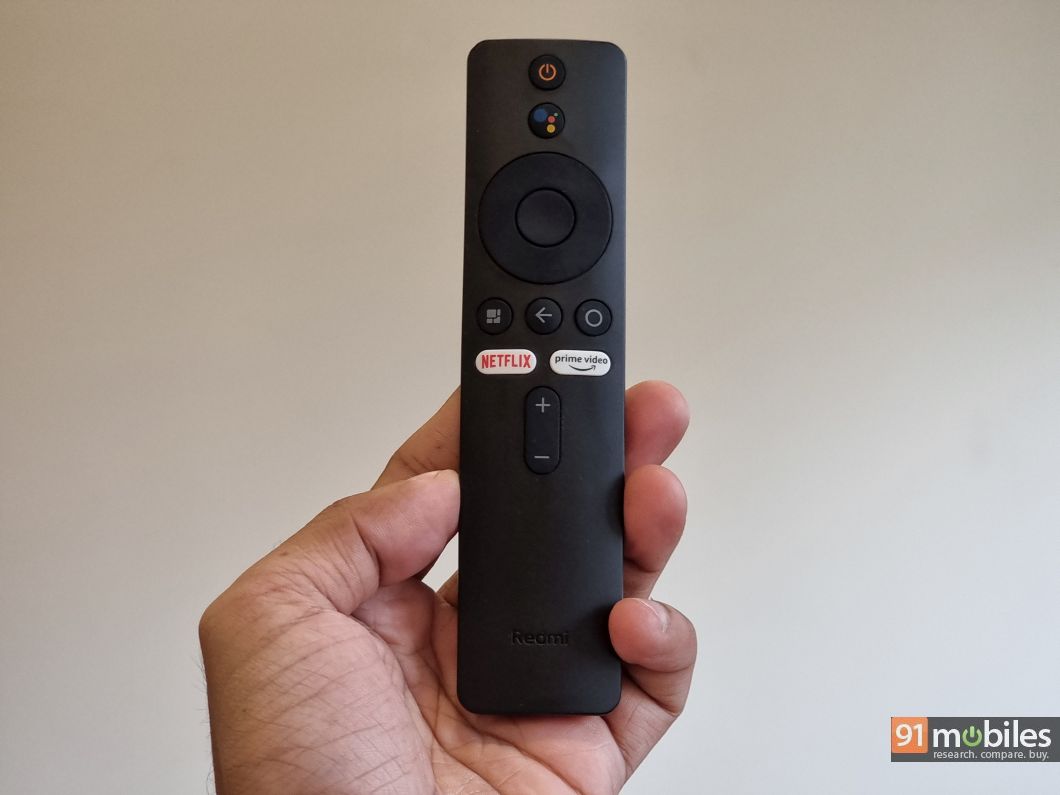 The software experience remains the same and buyers migrating from an older Xiaomi set will feel right at home here. As for app support, you’d be happy to know that the TV comes with support for all major OTT apps, including Netflix, Amazon Prime, Disney Hotstar, to name a few. What’s more, PatchWall OS has received a slurry of updates and is a force to be reckoned with in terms of content curation. Notably, the platform offers a user-friendly interface with neatly curated tiles for different genres and types of shows – so, if you were on the lookout for the best HDR shows to stream, or the best romantic-comedies, you will find hand-selected lists for the same.

Redmi’s X-series of TVs start at Rs 32,999 for the 50-inch model, with the 55-inch variant I tested retailing for Rs 38,999 in India. For the price, the Redmi TV X55 brings a lot to the table, including reasonably good picture quality, top-notch speakers, and a fantastic software experience. Correspondingly, buyers on the lookout for an affordable 4K HDR TV should keep the Redmi Smart TV X55 on the top of their wishlist.