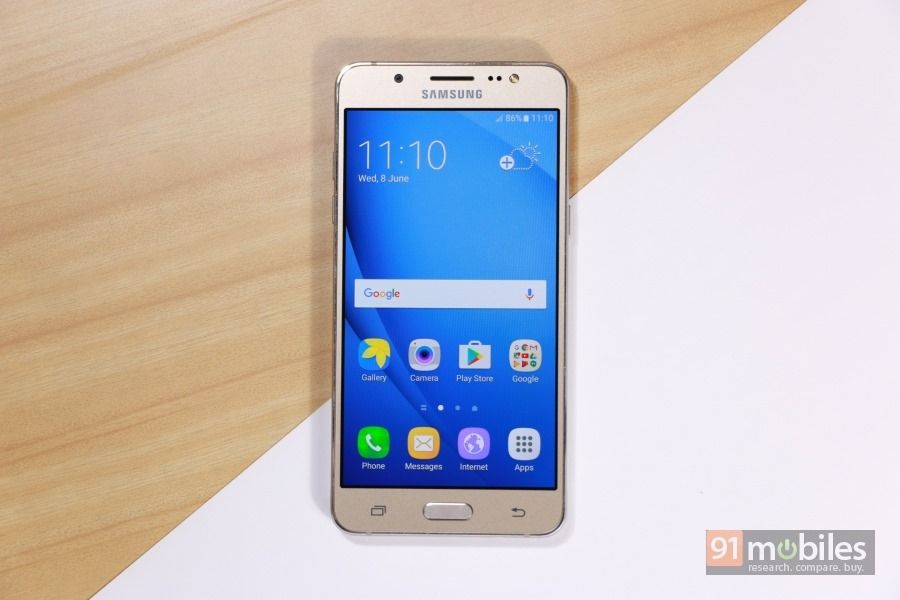 While Samsung has always been a head-turner in the premium segment, the Korean giant didn’t have a strong play in the budget segment until the Galaxy J1. However, for a segment dominated by Xiaomi or Moto G series of devices, the Galaxy J1 didn’t deliver as much, and felt a bit too pricey for what it offered. Realising the heat of the budget segment, Samsung soon launched its Galaxy J5 and J7 smartphones. While they seemed pretty loaded, and decently priced when considering budget devices from Samsung, the competition still offered so much more. Now the company has launched slightly upgraded variants of the Galaxy J5 and J7 (first impressions), and we reviewed the former to see if the upgrade is worth it.

Specs at a Glance 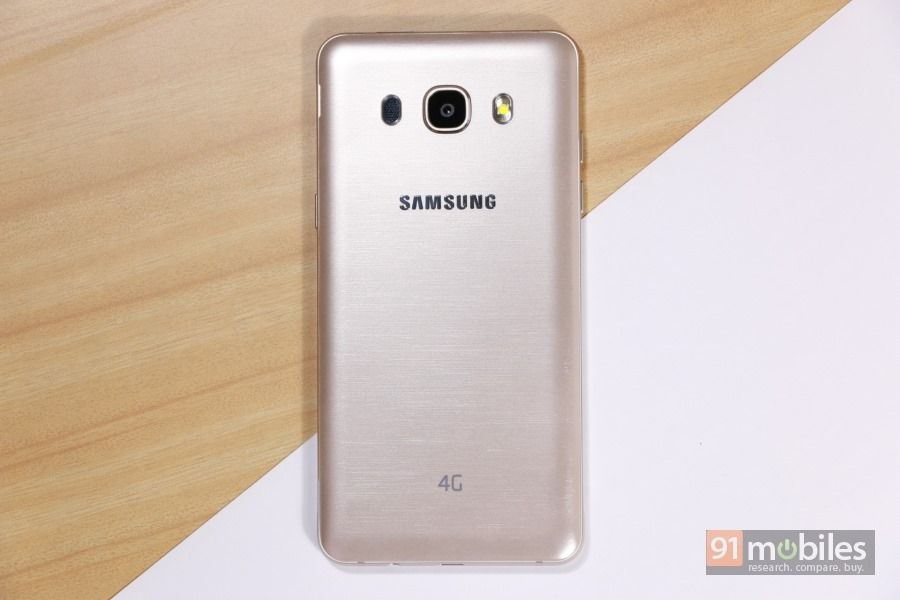 The previous iteration of the Galaxy J5 was an attempt from Samsung to join the mainstream, and the device offered a metal frame. However, the removable back panel was crafted out of textured plastic, and looked tacky when compared to the metal rims. The back panel on the Galaxy J5 2016 (hereafter mentioned as Galaxy J5) is still plastic, but it sports a smooth brushed finish on its back, which complements the metal edges perfectly. A full metal body would have been great, but our gold review unit of the J5, looked pretty classy. The presence of plastic does not seem very apparent unless you feel it. The black variant, however, gives that away. 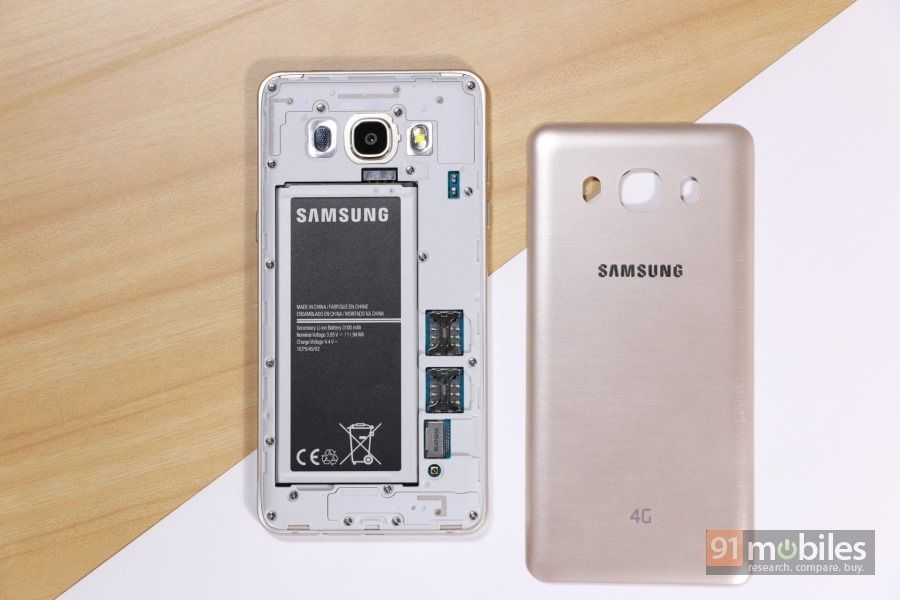 While there have been tweaks here and there in the overall design , the smartphone still looks like older Samsung phones, with the same candybar design, rounded corners, and the company’s signature home button on the bottom. The back panel sports the primary camera module sandwiched between an LED flash, and a loudspeaker grille. Below, you find some Samsung and 4G branding. Snapping off the back cover gives you access to the removable battery, two micro-SIM slots, and a microSD card slot. 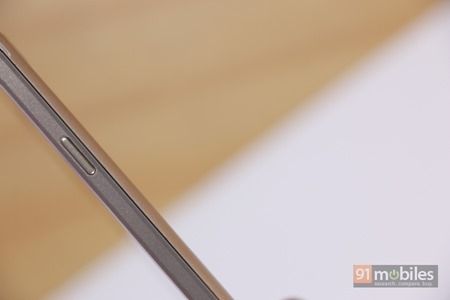 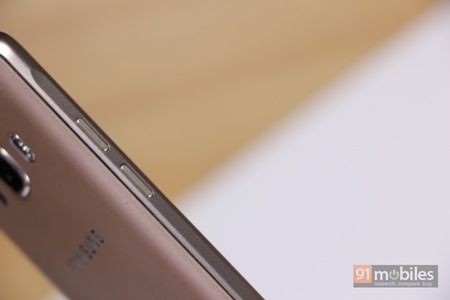 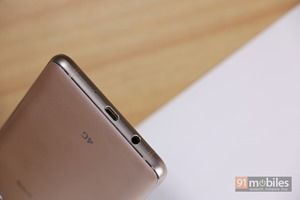 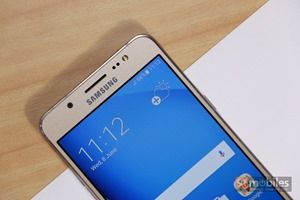 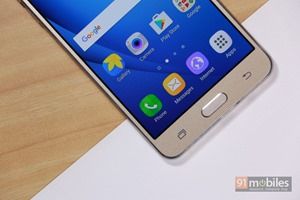 The rest of the buttons and ports placement is standard. Power button on the right edge, and volume keys on the left. A micro-USB port, audio jack, and the primary microphone have been placed on the bottom spine. Upfront, the display comes bordered by an earpiece, some sensors, and an LED flash, on the top. Below, as we mentioned earlier, is Samsung’s signature home button sandwiched between back, and recent apps keys.

The build quality of the phone feels pretty solid, however, the back panel on its own feels slightly flimsy. The J5 is a compact 5-incher, and hence it snugly fits in the hands. However, it’s not the lightest phone around, nor the slimmest, but the subtle curves on the back panel solve that issue. Operating the smartphone with one hand is not problem, and overall, the Galaxy J5 scores well in terms of design. Not excellent. But well.

Display: A Treat To The Eyes

The display on the Samsung Galaxy J5 sports HD resolution. While there are quite a number of smartphone in this segment which sports full HD screens, the display on the J5 doesn’t look atrocious, and the pixel density of 293ppi results in a sharp enough display. Since, the phone gets Samsung’s Super AMOLED tech, the display looks brighter and more vivid, and actually better than the competition. 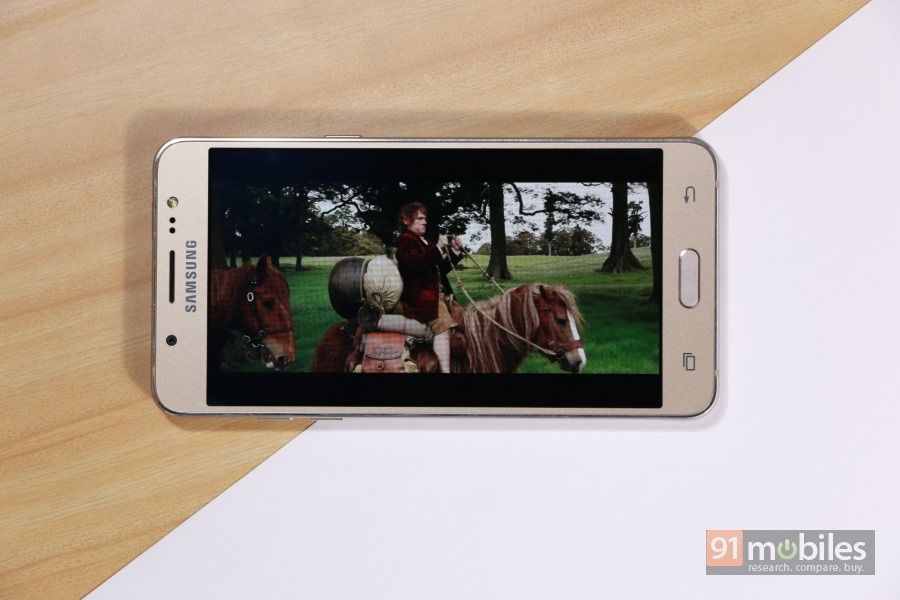 The colours just pop on the screen, and don’t wash out even when viewed from extreme viewing angles. However, if you feel the saturation is extreme for your liking, you can choose between four screen modes which include Adaptive display, AMOLED cinema, AMOLED photo, and Basic. 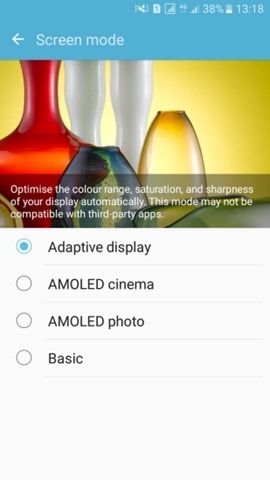 The Basic setting actually filters a lot of blue, and hence the colours do not seem as harsh to the eyes. It’s not exactly a bluelight filter, but reading in the Basic mode will be more confortable, than in AMOLED Cinema or Adaptive. The sunlight legibility is excellent on the phone, and you get the Outdoor mode, which pumps up the brightness slightly more than full for 15 minutes, so the screen is legible even in the brightest of the sun. In a nutshell, there’s nothing much to complain about the display of the Galaxy J5.

Camera: Not at par with the standard 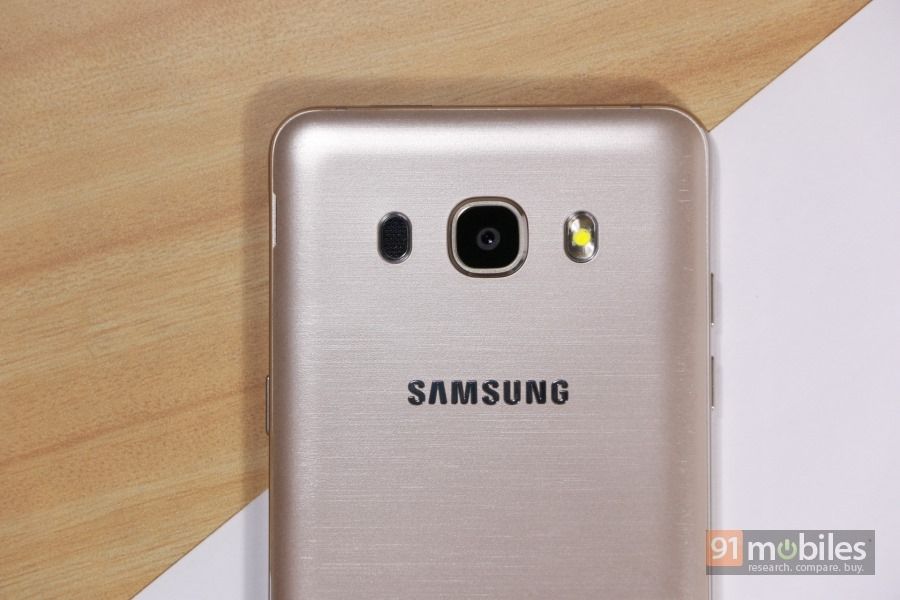 Almost every phone in the mid-range segment is equipped with a 13MP primary camera, and the difference in performance on all the shooters is overwhelming. Despite the established fact that solely megapixel count cannot determine the image quality, we can’t help but presume that a 13MP shooter will manage to create some decent pictures. But alas, that’s not how it goes. Before we tell you how the shooters on the J5 performed, have a look at the default camera app. 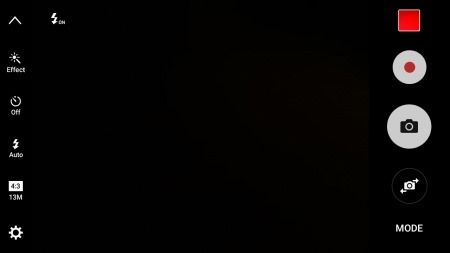 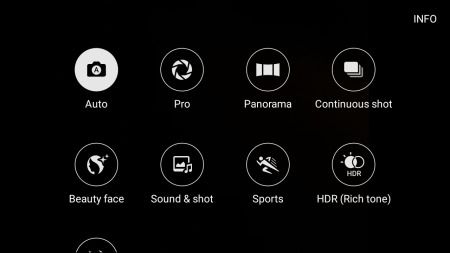 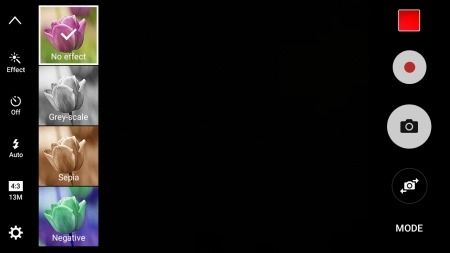 It’s the same old TouchWiz camera app, and it offers a fair number of features. You get modes like Pro, Panorama, Beauty Face, HDR, Wide Selfie and Sound & Shot. Three real time filters can also be applied to pictures and video. Apart from that, toggles to control the flash, timer, picture size, and access the camera settings have been placed on the left of the viewfinder.

The Samsung Galaxy J5’s primary camera is not among the best we’ve seen in the segment. The long shots looked dull, and pixelated the moment we zoomed in. However, the macro shots were flooded with detail, and the colours looked vibrant, with accurate reproduction. A fair amount of detail remained intact when we zoomed the image. The J5 captures slight colours in low light conditions, but that’s about it. However, the flash on the smartphone works perfectly, and the subject looks evenly lit, without being overexposed. The J5 performs better at night. The night shots looked sharp on the screen. The picture was grainy, which is understandable, but over all, you can rely on the shooter when clicking during night time.

The 5MP shooter on the front clicked decent selfies in daylight. However, it captures just enough detail for you to be able to put the pictures on Instagram, and other social media, since zooming in, or viewing the image in its actual size reveals blurred lines and murky textures. The colour reproduction was close to accurate. The selfies clicked indoors, however, lacked detail and looked hazy. The front-facing flash works nicely and selfies clicked in low light conditions turn out uniformly lit.

To sum it up, the shooter on the Samsung Galaxy J5 is a mixed bag. While you might manage to create some decent imagery in some lighting conditions, overall, the cameras are just average. Here are a few images clicked with the primary shooter of the smartphone. 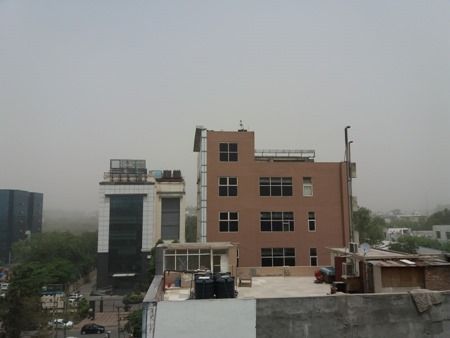 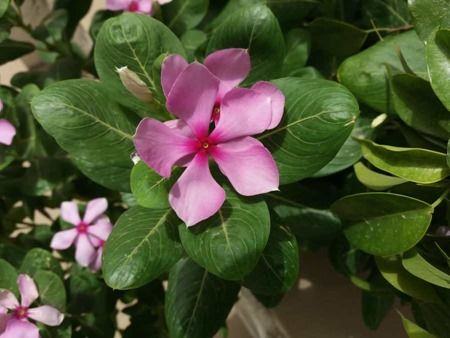 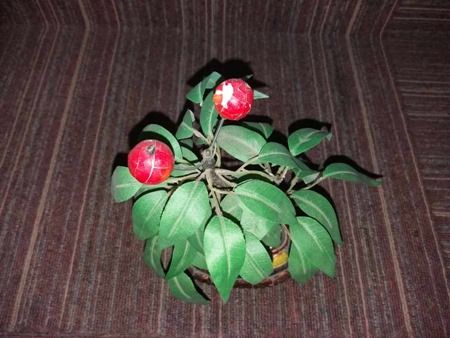 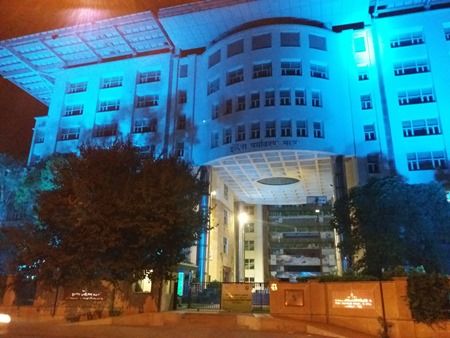 The Samsung Galaxy J5 runs Android Marshmallow, with Samsung’s custom UI on top. There are no new features to be talked about, it’s the same old TouchWiz, which you should be familiar with if you have ever used a Samsung device. 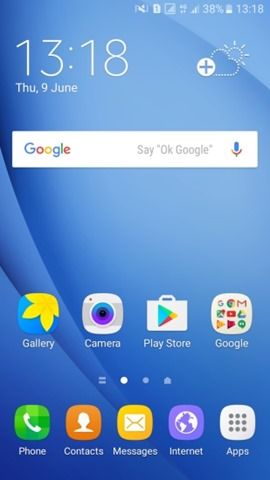 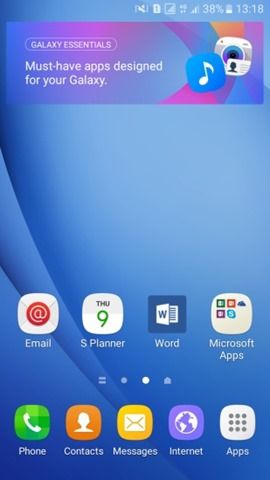 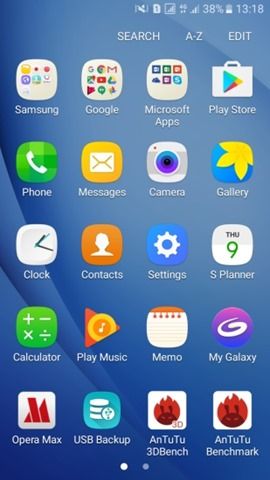 However, earlier known for its bloatware, the new version of TouchWiz is minimal, clean, and comes with only a few first party and third-party apps. 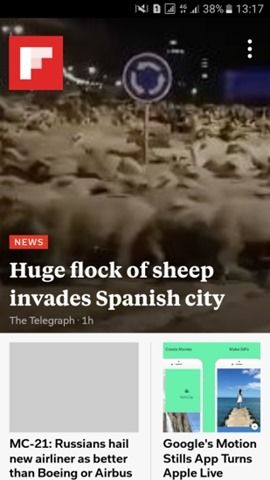 You get My Galaxy, Galaxy Apps, S Planner, and S Health from Samsung… the lot of apps from Google, and some Microsoft apps as well, all of which are pretty useful. Apart from that, the phone ships with just Opera Max. There’s also a dedicated homescreen on the extreme left called Briefing, to keep you updated about all the news from all around the world.

The phone does not have fancy software features, but you do get Samsung’s Smart manager, Ultra Data Saving mode and Ultra Power Saving mode. There’s an option to apply various themes, and it can be accessed from the settings menu. There’s also a one-hand mode, which is not exactly needed in this 5-inch smartphone.

Performance and Battery: What You Need From A Daily Driver

The Samsung Galaxy J5 can easily take on everyday tasks. Powered by a Qualcomm Snapdragon 410 chip, and 2GB of RAM, the smartphone does not lag or stutter during regular use. We did not encounter any major app crashes. The processing is not lightening fast, but it’s pretty smooth. 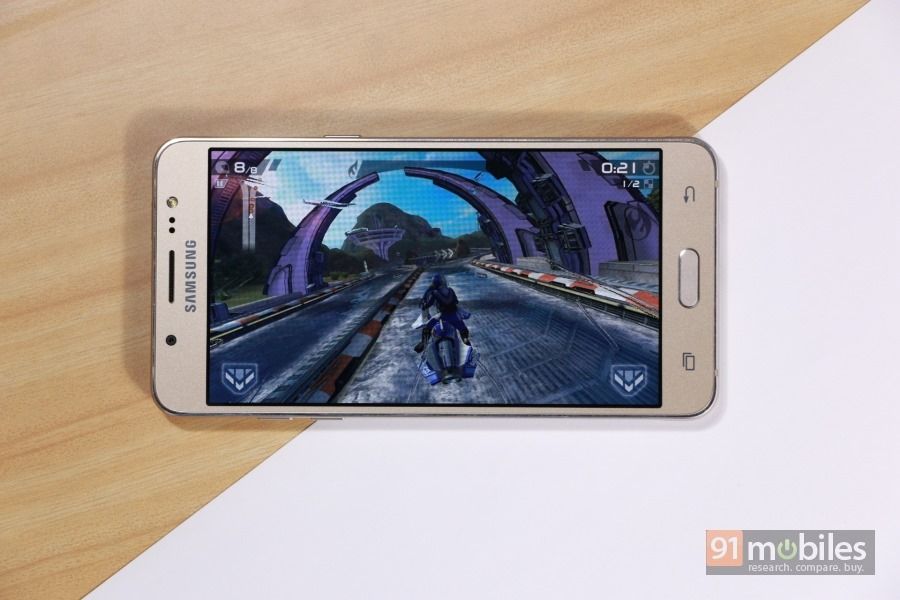 We tried titles like Asphalt 8: Airborne and Riptide GP2 to stress test the engine of the Galaxy J5, and it came out with flying colours. The games loaded quickly, and there wasn’t even the slightest of lag or jitters during the gaming sessions. The graphics rendered beautifully as well. The smartphone didn’t even warm up after a 45 minutes long gaming sessions, that is as impressive as it can get. 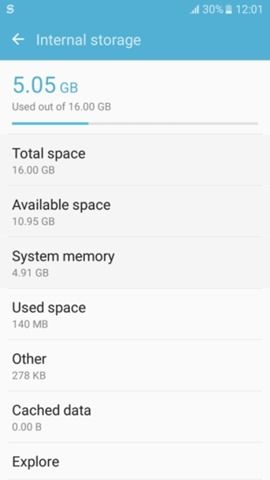 You get 16GB of built-in memory in the J5, out of which 11GB can be availed for personal use. You can make use of the microSD card slot to expand the storage as well. 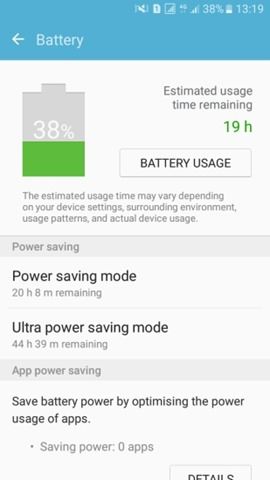 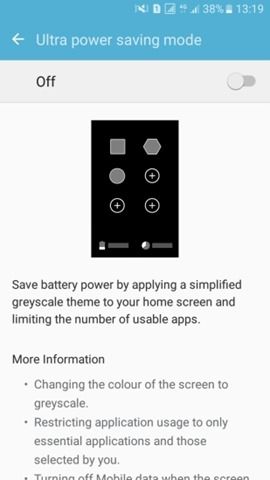 The battery backup of the smartphone is brilliant, and that is apparent from our battery test, where the smartphone died after 16 hours of HD video playback. This is one of the few smartphone which actually deliver 24 hours of actual use, and we’re excluding the night time. We did not need to look for a charger until a day and a half after charging the phone, and the usage included using 4G data, making calls, using instant messaging apps, among other things. There’s a regular power saving mode, and as we mentioned earlier, Samsung’s UPS mode, which ensure you make the most of the juice. 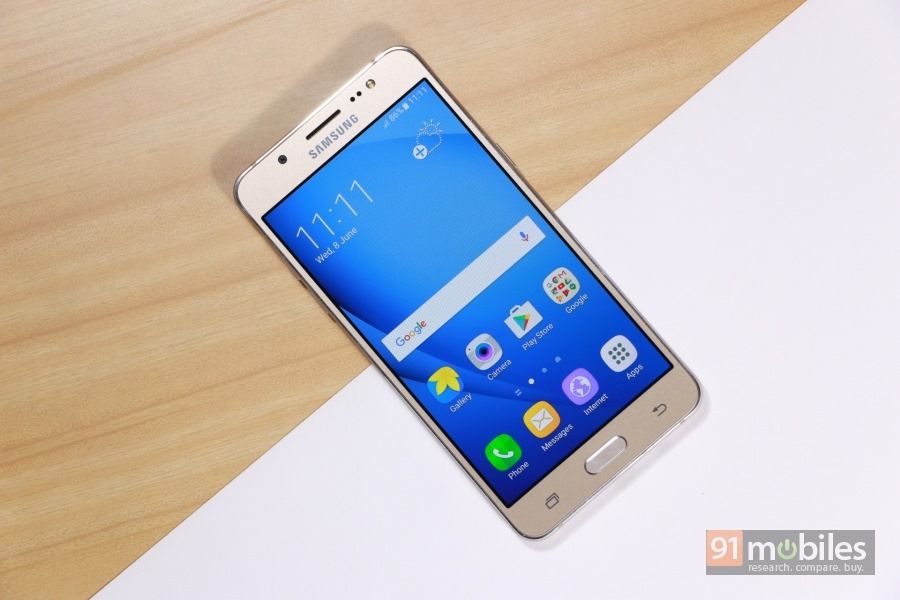 The Samsung Galaxy J5 is a solid offering from Samsung. It might not be one of the most feature-packed budget device from the company, but it surely is a decent daily driver. However, it struggles in the camera department. And in the mid-range segment, you have options like the Lenovo ZUK Z1 (review), and the Moto G4 Plus (review), both of which offer great camera performance. The J5 does have great battery backup, but the Xiaomi Redmi Note 3 (review), with its 4,100mAh battery is a solid match. It must also be noted, that the Xiaomi Redmi Note 3 features a full metal body. While it is almost an all-rounder, the J5 does not match up to the tough competition. If you’re specifically looking for a phone from a tier 1 brand however, the Samsung Galaxy J5 does deserve a second look.