Samsung and Apple have been following each other’s footsteps for quite some time. When Samsung introduced the super-sized Note series, the Cupertino giant launched a large-screened Plus-sized phone (after taking its own sweet time) with the iPhone 7. So it’s not a surprise to see Samsung releasing three iterations of its latest S10 flagship, in a similar vein as last year’s iPhone XS (review), XS Max (review) and XR (review). And just like the 11th-gen iPhone, the mainstay of Samsung’s flagship series – the S10 (first impressions) – doesn’t get much attention in front of the more loaded S10+ (review) and the affordable S10e (review). But the Samsung Galaxy S10 shouldn’t be ignored, and if you want to know why I said what I said, then read on. 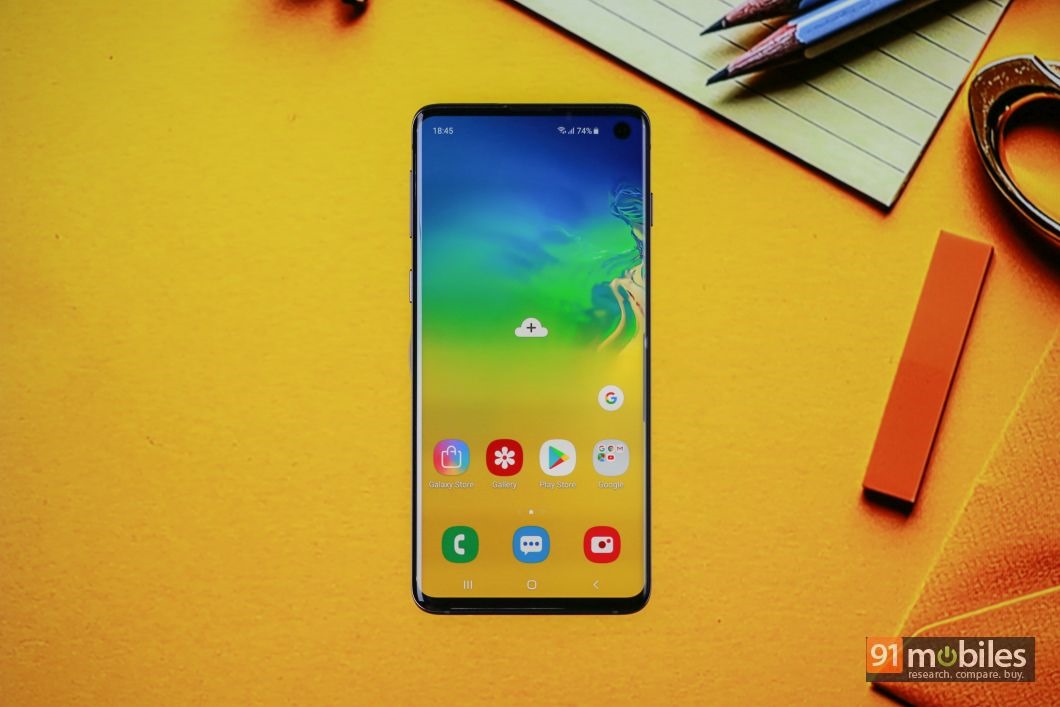 Considering that the Samsung Galaxy S10 isn’t much different than its bigger sibling, except for size, battery capacity, and the selfie shooters, this review will mainly focus on these key differences.

In terms of size, the S10 seems perfectly balanced between the large S10+ and the compact S10e. It’s neither too big, nor too small, making it easy to use single-handedly, yet offering enough screen real estate to enjoy multimedia content. The brand’s implementation of the punch-hole display, the hairline bezels up top, and the thin bezels at the bottom help immensely too. 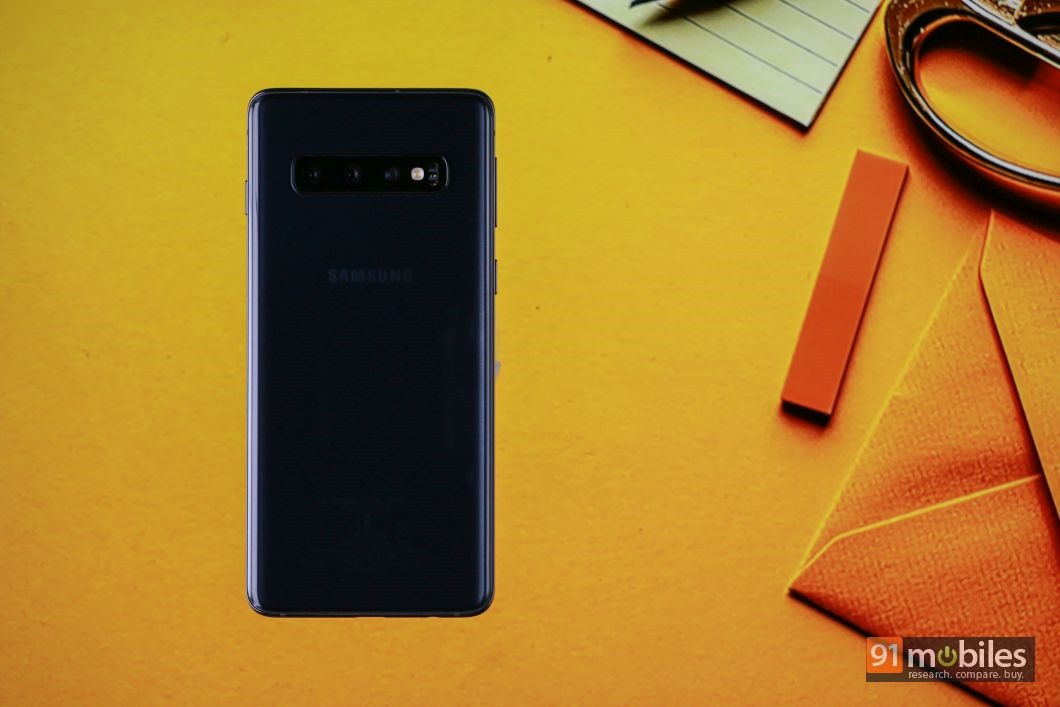 The display is quite immersive thanks to the use of a Dynamic AMOLED panel, which measures 6.1-inches diagonally and bears QHD+ resolution with a 19:9 aspect ratio. The HDR10+ compliant screen offers impressive visuals, and considering that the brand’s Super AMOLED was already the best in the business, this one takes the experience to a whole new level. 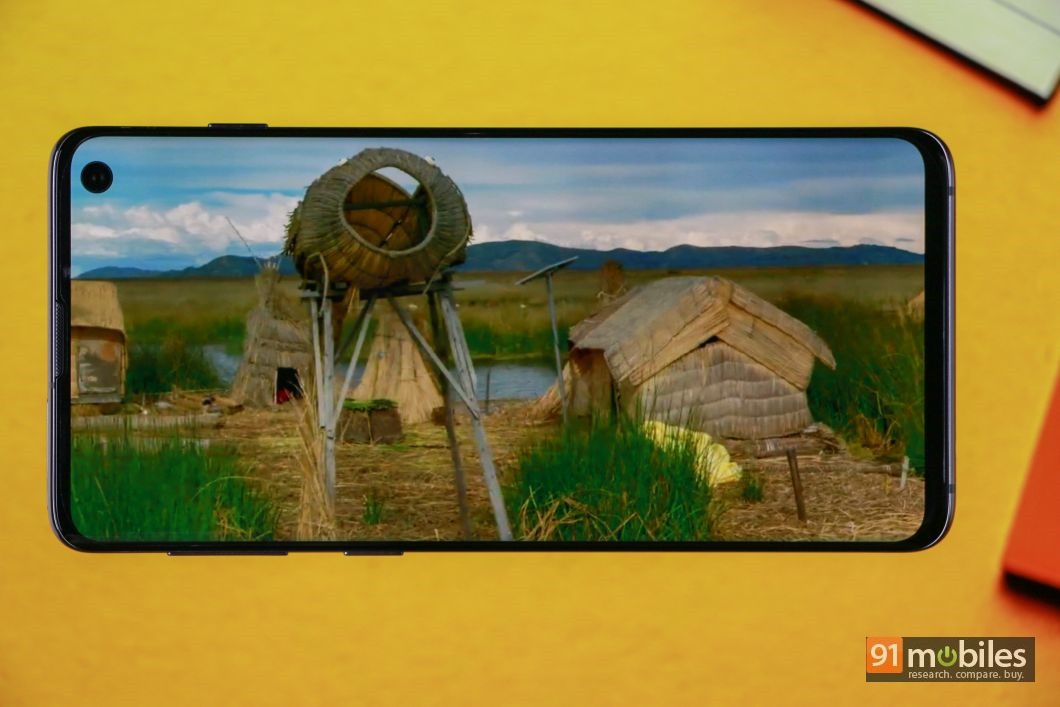 As I mentioned in my review of the Honor View 20, the punch-hole display is, personally speaking, a better way to achieve a full-screen fascia. While the punch hole isn’t easy to ignore as such, it does offer minimum obstruction for the content you’re reading or watching. I also like the fact that there’s a little animation around the punch-hole every time you’re using the face unlock or front shooter on the Galaxy S10e. Of course, you can also use the ultrasonic fingerprint reader to unlock the device, which works well most of the times.

The punch-hole houses a single 10-megapixel selfie snapper, unlike its bigger sibling which comes with an additional 8MP depth sensor. But otherwise, you get the same, great-looking selfies in normal scenarios.

With the smaller size of the Galaxy S10, comes a smaller battery capacity of 3,400mAh. Thanks to the optimisations however, the device manages to last till the end of the day and then some more. You can juice up the handset fully from 10 percent battery in about an hour with the bundled adapter. Along with the ability of wireless charging, you also get Wireless PowerShare feature to enable reverse wireless charging for compatible devices.

If you look past these differences, then the S10 shares a lot of similarities with the S10+. Design-wise, you’ll find the same IP68-certified glass-sandwich construction which Samsung flagships have been offering for a while now. While my review unit came in a classy black hue, you can also opt for more stunning colour options such as white and blue. As with other glass-back phones, the Galaxy S10 attracts a lot of fingerprints and is quite slippery too, so it’s nice to get a transparent case in the box. The button and port placement are also the same – and the good news is that the Bixby button can now be remapped, and you can still find the good ol’ 3.5mm audio socket on the bottom.

Just like the S10+, the Samsung Galaxy S10 also sports triple rear cameras, with a 12-megapixel sensor offering dual aperture between f/1.5 and f/2.4 accompanied by a 12-megapixel telephoto lens and a 16MP ultra-wide sensor. As mentioned in our review of the S10+, the latest flagship from the South Korean giant is a capable shooter across all sorts of situations. The images are sharp and reproduce saturated colours, which look quite pleasing to the eyes. Having said that, the pictures can’t match Google’s Pixel 3 in terms of overall quality and while the AI-based Scene Optimizer is good, it’s not the best AI-enhanced mode I’ve come across. I’ll now let the images do the talking.

Inside the Galaxy S10 ticks the brand’s in-house Exynos 9820 SoC. Unlike other flagship chipsets, most of which use 7nm fabrication process, Samsung’s chip is fabricated using an 8nm process though it also offers a tri-cluster architecture just like the Snapdragon 855. With a maximum clock speed of 2.73GHz, the Samsung SoC is able to handle anything thrown at it, and multitasking is buttery-smooth too, thanks to 8GB RAM. During my review, the smartphone didn’t show any trace of lag and gaming the experience was enjoyable too. Playing titles like PUBG and Asphalt 8: Airborne was a joyous affair with great graphics, all thanks to Mali-G76 MP12 GPU. The phone does tend to get a little warm after long gaming sessions. 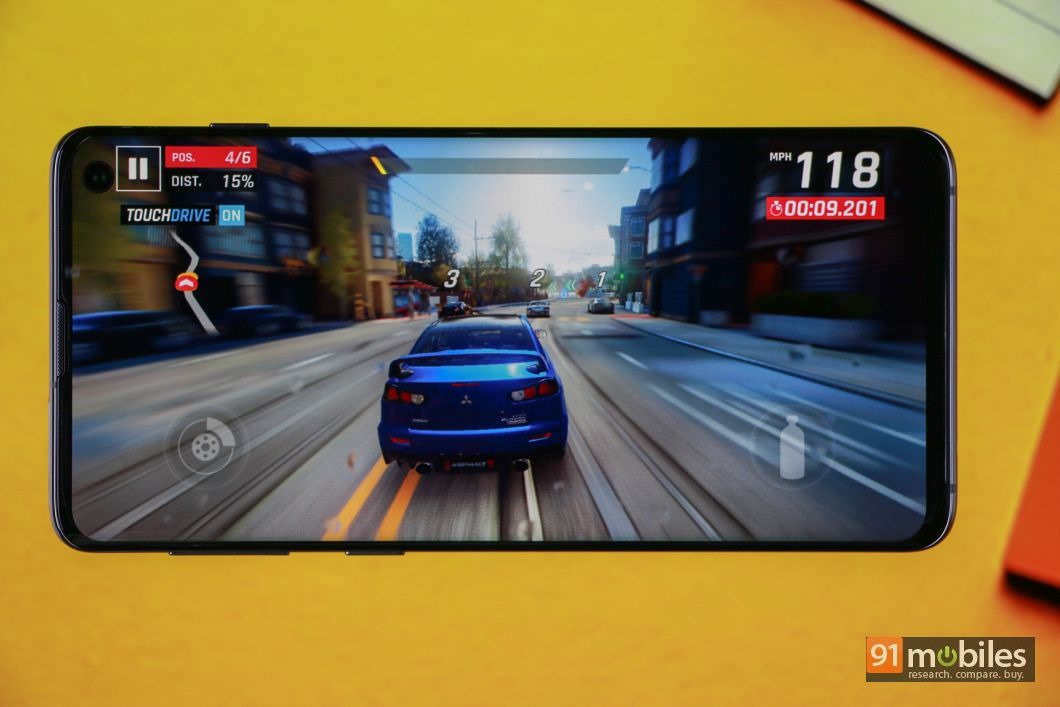 My only concern in the performance department is how the S10 would fare in long-term usage, as Samsung smartphones are infamous for slowing down over time. However, with the device running the all-new One UI, I’m hopeful that the company has reworked on that bit. While I’m on that topic, it’s worth mentioning that the new interface based on Android 9.0 Pie is visually appealing and quite minimalistic as well. Gone are the janky animations and gaudy icons, and in their place, you’ll find functional UI elements. One UI also makes single-handed usage quite easier as things like messages, dialer, etc all open towards the bottom. You can also enable gesture-based navigation from settings – though the usage isn’t as simple as it should’ve been.

On the storage side of things, the Galaxy S10 comes with 128GB memory onboard. After accounting for the OS and other resources, the device offers ~110GB space for installation of apps and storing personal files. You can also expand it further up to 512GB with the use of a microSD card.

In a nutshell, if my experience with the Samsung Galaxy S10 is anything to go by, I’d say that the device deserves more attention than it’s getting. But in the end, everything boils down to the price, and that’s where things become muddy. You see, the Galaxy S10 is priced at Rs 66,900, and this year, with the release of an affordable variant in the form of the S10e, one can get a similar flagship experience for Rs 55,900. Then there’s the top-of-the-hill S10+, which carries a price tag of Rs 73,900. 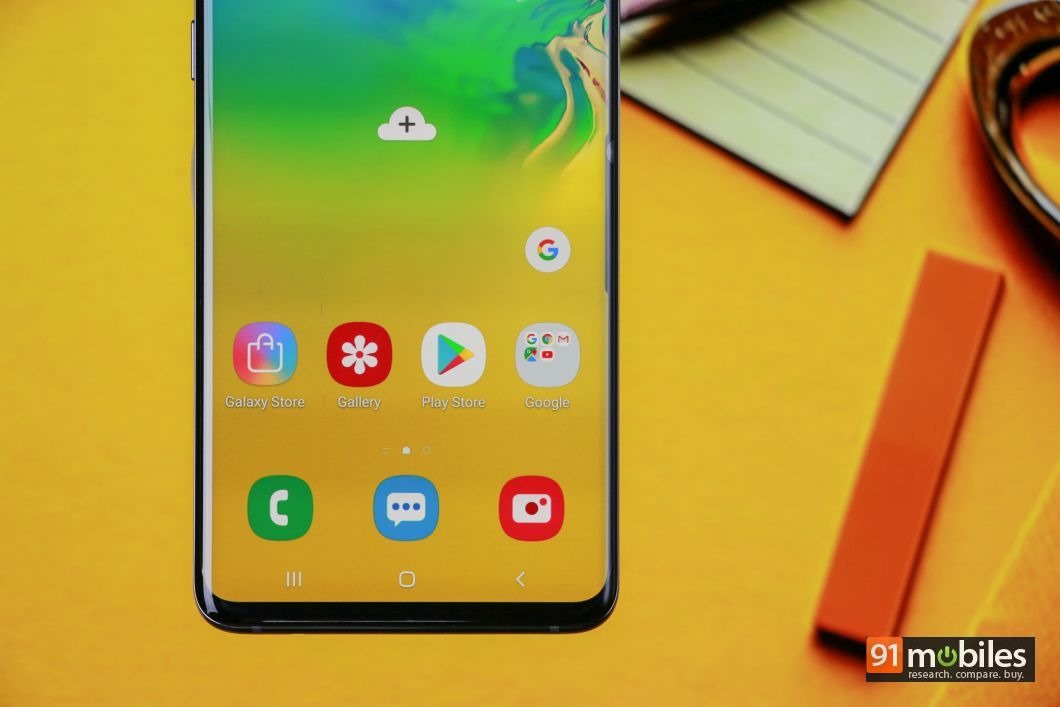 What’s not helping the S10’s case is the competition. And while one can ignore the Pixel 3 XL (review) as even though it’s the perfect pocket shooter, Google’s offering isn’t an all-round smartphone, it’s difficult to not mention the soon-to-be-launched Huawei P30 Pro (first impressions). With quad rear cameras and top-notch specs, it’ll give a tough challenge to the S10 trio, though we don’t know its pricing as of now. 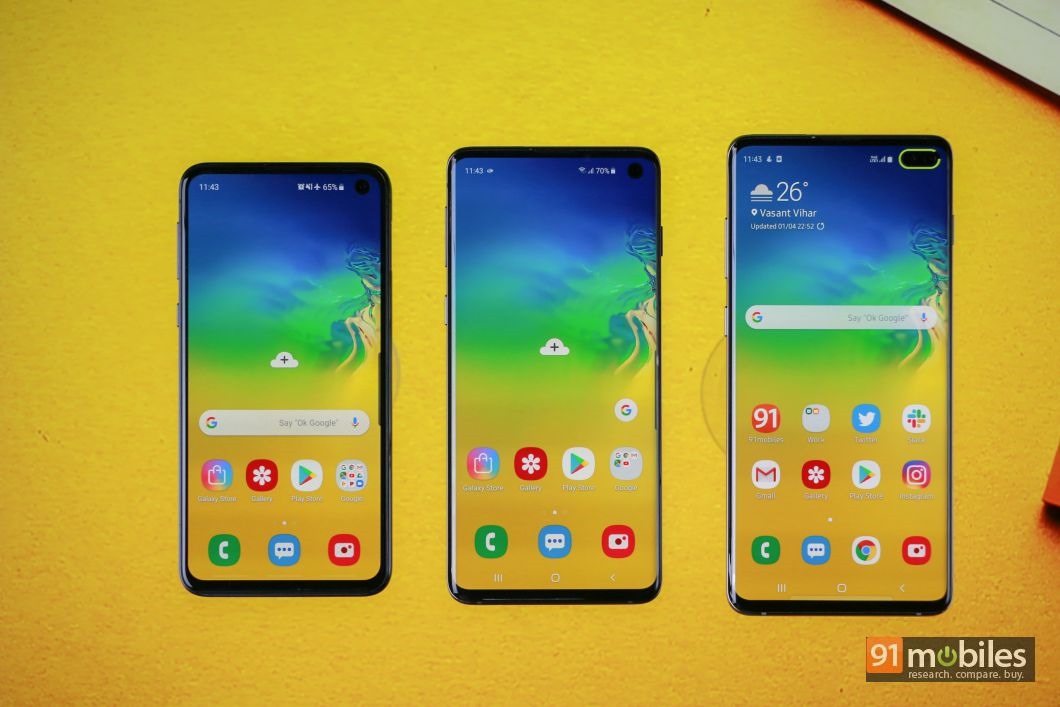 But if you’re dead-set on buying a Samsung flagship this year, then this is how I’ll break down the choices: the S10e is the most affordable, but if you want to buy it, then buy it for its compact size, for you would need to compromise on certain aspects such as dual rear cameras instead of a triple-camera setup and a smaller battery. The S10+ on the other hand, is a great smartphone, though it might be too large for some, and it’s priced on the higher side too. That leaves us with the Galaxy S10, which sits perfectly in the middle and even though it misses out on the secondary depth camera on the front and is powered by a 3,400mAh cell (instead of the 4,100mAh battery powering its bigger sibling), it does deliver a powerful flagship experience.

CWG 2022 live streaming: How to watch India vs Australia and other Commonwealth Games 2022 live online and on TV, India schedule