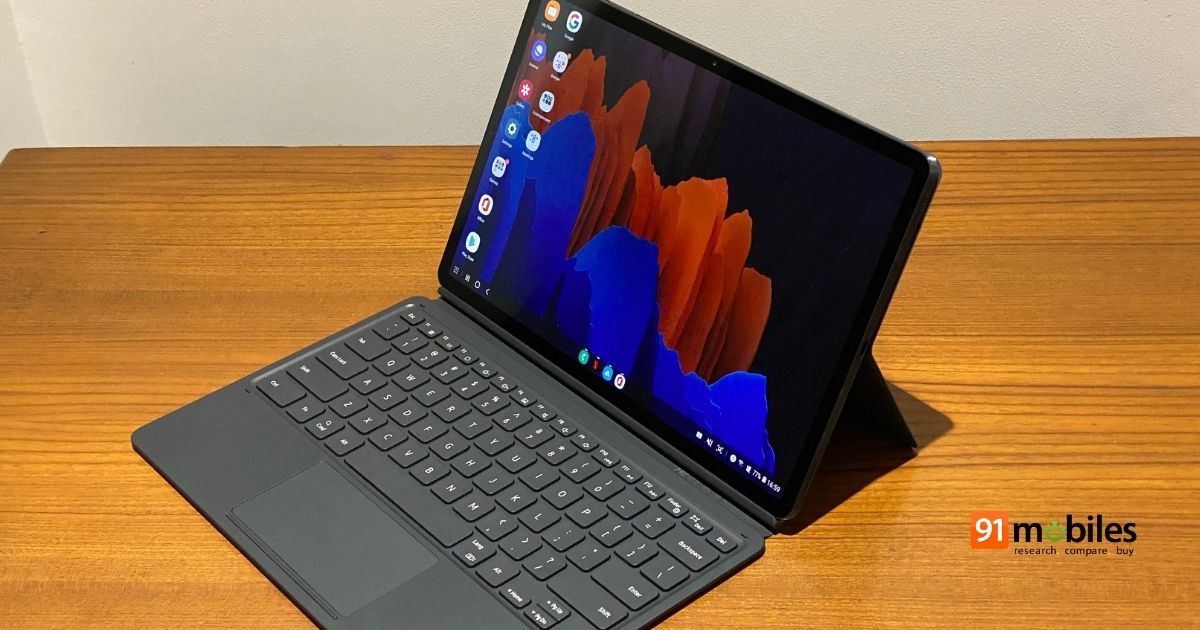 On the face of it the new Galaxy Tab S7+ from Samsung seems like a large tablet. Add the keyboard cover, and thanks to a little something called DeX, it transforms into a productivity tool that’s surprisingly versatile and extremely powerful too. Maybe I’m getting ahead of myself though… so let me start at the beginning.

In the current work @ home, learn @ home scenario, devices that can don multiple hats and take on different roles can be a boon. The Samsung Galaxy Tab S7+ is a prime example. It’s large, it’s loaded, it’s capable, and most importantly, it fits a variety of different use cases. 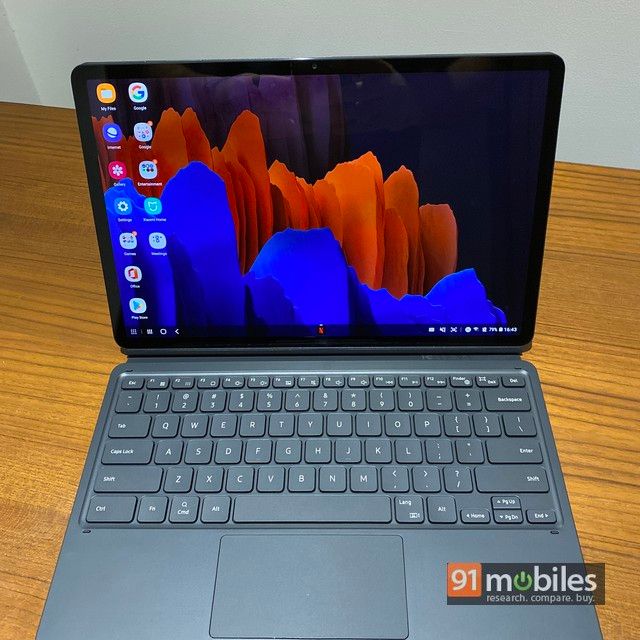 Before I dive in, allow me to gloss over on the specs first. This will also give you a good idea of what we’re dealing with here. For everything you do on this device, you’d be eyeballing the 12.4-inch, 2,800 x 1,752 pixel Super AMOLED display. This beauty of a screen supports HDR10+, offers an aspect ratio of 16:10 and can go up to 120Hz as far as refresh rate is concerned. Handling number-crunching duties is the flagship mobile processor from Qualcomm, the Snapdragon 865+. There’s 6 gigs of RAM, 128GB storage, 4G LTE support, an 8MP front shooter, dual shooters at the back comprising 13MP and 5MP sensors, and a 10,090mAh battery. The tablet weighs 575 grams, which is definitely on the higher side. An S Pen comes included in the retail box, but you’d need to spend extra on a keyboard cover. 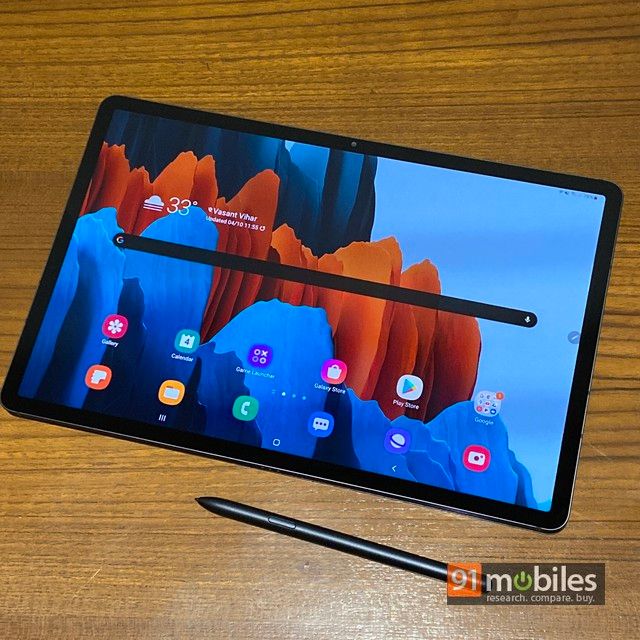 The slate itself is a large slab of metal and glass, with rounded corners. If you hold it in landscape mode, you’ll find a Type-C port on the right, flanked by two speakers. On the left are two more speakers. On the top, there’s a power key, a volume rocker and a SIM tray. 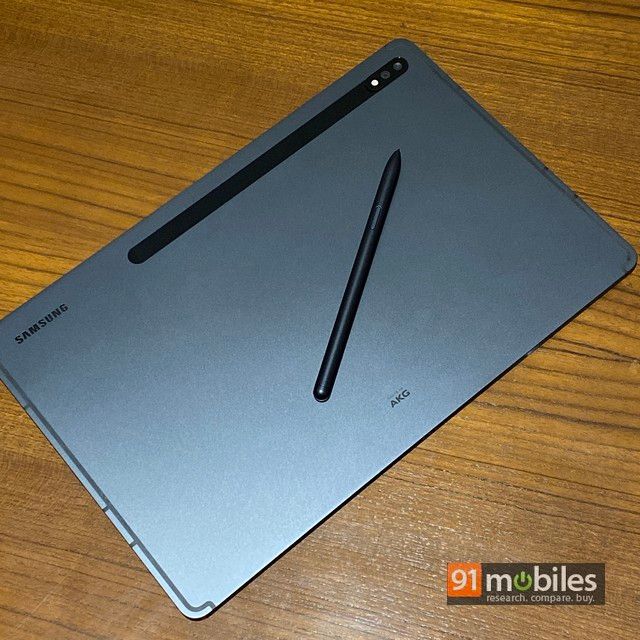 At the back, there are antenna lines running across the sides, Samsung branding, and the dual camera setup and flash sitting at one end of a black strip. The bundled S Pen attaches magnetically to this strip, and draws battery juice as well for charging its own battery. At the bottom, you’ll see the connecting pins for the keyboard cover, and a couple of tiny indentations that provide support when the keyboard is attached. Coming to the keyboard cover, it comes in two parts, with both attaching magnetically to the tablet. The bottom portion has the keyboard and the trackpad, and attaches to the bottom of the tablet, while the other half of the cover attaches to the back. The rear portion of the cover, apart from adding a bit of protection, also has a built in kickstand, and a small cavity on top that accommodates the S Pen and can be flipped open for access. It’s all very neatly put together, and when closed, the device with its keyboard cover resembles a premium leather folio. 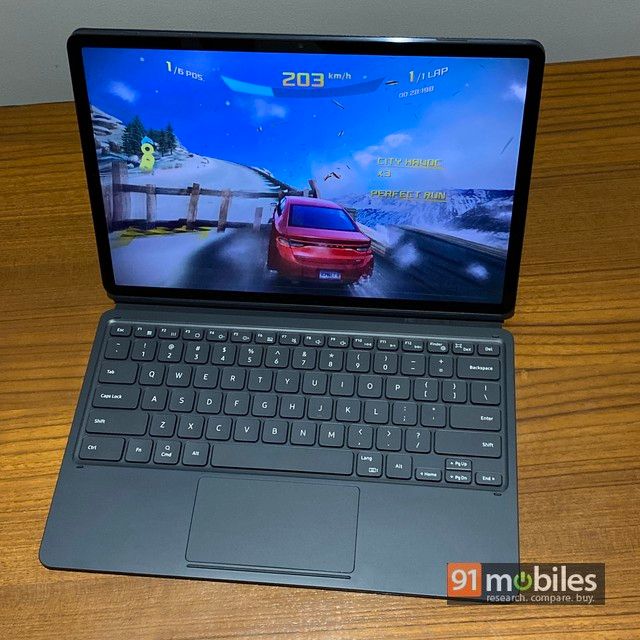 The Galaxy Tab S7+ excels in the entertainment department. Its big, bright display is really the highlight, and as we all know… with flagship specs, comes smooth performance. The software aspect is, as usual, handled by Samsung’s OneUI atop Android. While the icons do look quite large on the Tab S7+’s screen, we’re all aware of how well the platform works by now. Streaming shows and movies on the Tab S7+ is not just fun, the gorgeous 120Hz Super AMOLED screen makes it an immersive experience too, with the quad speakers doing their job well in churning out rich audio. I do miss a 3.5mm audio socket though – nothing beats the convenience of being able to plug in your own pair of cans. Games look great as well, and there are some, like Asphalt 8, that can even be played with the keyboard accessory. So. Much. Fun. 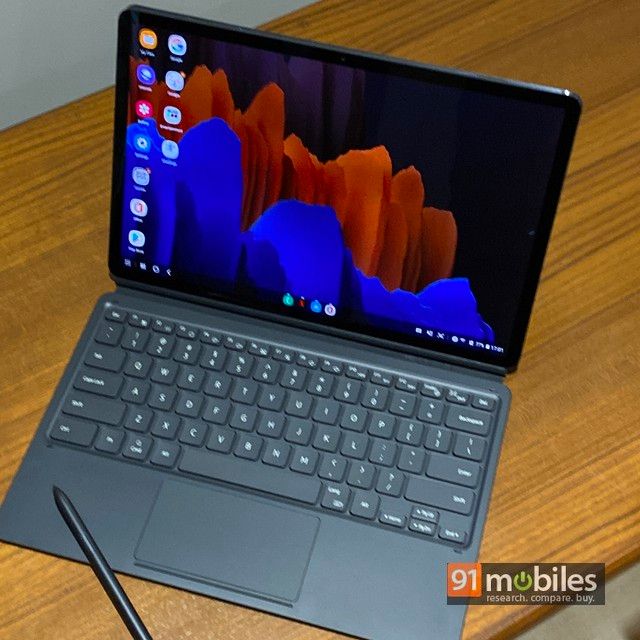 Switch to work mode, and you have DeX – Samsung’s solution for bridging the tablet-laptop divide. To get into DeX, you can use the option in quick settings, or make use of the shortcut key provided on one of the function buttons on the keyboard. DeX basically gives you a desktop-like view of things on the tablet’s screen, somewhat like what you’d see on a Windows laptop. This means you get desktop shortcuts, a taskbar at the bottom, and the ability to run multiple apps together in windowed form. The physical keyboard doesn’t feel cramped, and combined with the large, responsive touchpad, you can basically use the tablet-keyboard combination pretty much like a proper laptop, with your usage limited only by the limitations of the Android platform, which is the base. Heck, you even get support for standard Windows shortcuts like CTRL + C and CTRL + V for copy paste, making things straightforward, especially if you’re juggling constantly between different devices. On the flip side, some apps default to mobile UI and depending upon your use case, you might find using a proper laptop with a proper desktop OS simpler. That said, Android does have apps for most use cases, and the usual day-to-day productivity tasks based on working with documents and presentations, emails, web browsing etc can be handled quite easily. The low-latency S Pen comes in handy for not just doodling and drawing, but jotting down notes and marking up documents – it all comes together quite nicely overall. 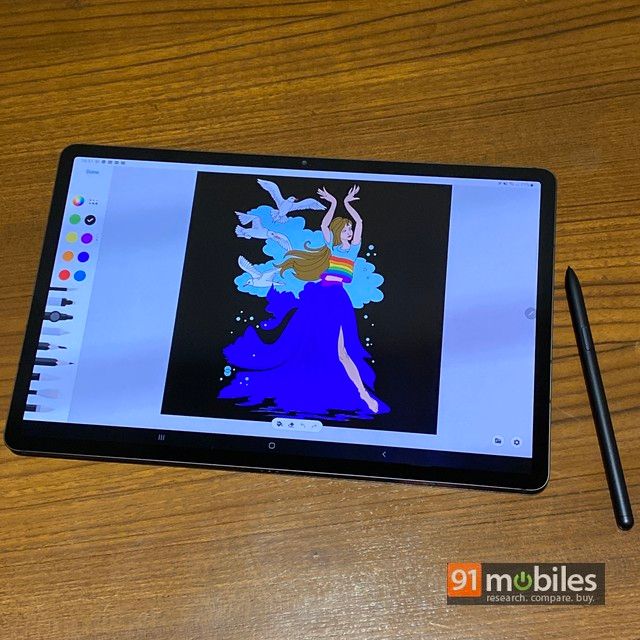 Let’s pay attention to some of the other basics now. The combination of the in-display fingerprint scanner and face unlock works well for user authentication – no complaints there. The dual rear cameras are a bit of an overkill for a device like this in my opinion – it’s just too large to lug around with you for proper photography. The useful of this device wouldn’t have diminished in any way if Samsung had just provided a basic snapper at the back, in my opinion. And maybe reduced the price tag too, in the process. The front camera is far more crucial, since it handes the all-important duty of tackling video calls. The 8MP sensor does the job reasonably well too. As far as the battery life is concerned, it can vary quite drastically depending upon usage and whether you have the 120Hz refresh rate enabled. In the PCMark battery test, the device logged just about 6.5 hours, with screen set to 50 percent brightness and 120Hz refresh rate. In real life usage however, I got much better results, easily lasting me a day with heavy use, and even two with medium use. Also, the standby times are excellent, so if you don’t use the device for a day or two in the middle, the battery levels don’t deplete significantly when do come back to it. The built-in 4G is handy of course, for when you want to go out and about… and really make full use of the Tab S7+ portability. Speaking of, you should note that you’d still need a flat surface like a table to use the tablet with its keyboard cover, since it isn’t so easy to use it with the device resting on your lap. Something to keep in mind if you plan to use it while commuting or travelling. 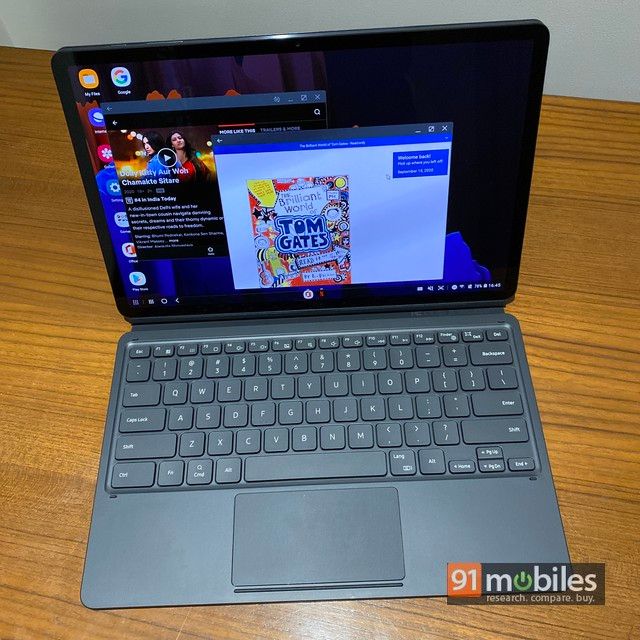 The Galaxy Tab S7+ competes directly with the Apple iPad Pro, which is said to be quite capable in most respects. I’m not getting into the Android vs Apple debate here, but the fact is that the iPad Pro is no slouch in the screen and hardware department either, and possibly even a tad bit better suited for creative and productivity work. That said, the Android platform is quite flexible and the Tab S7+ does gain from that. However, with the Tab S7+ 4G costing Rs 79,999, and the keyboard cover an additional Rs 17,999, the total package would set you back by almost a lakh of rupees. For this kind of an outlay, you’d need to be sure the device serves your use case well, especially over and above a proper laptop. All said and done, the top-notch specs, the gorgeous screen and the great blend of capable hardware and software in general, make the Galaxy Tab S7+ a compelling option for handling both work and play. In fact, it won’t be too far fetched to call the Tab S7+ the best Android tablet yet.