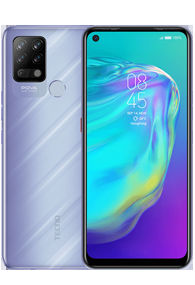 When talking about budget smartphones, Tecno’s offerings usually aren’t part of the conversation. However, the newly-launched Tecno POVA could deserve a mention as the phone goes toe-to-toe with heavyweights from Xiaomi and Realme. Thanks to its huge 6,000mAh battery, decently fast MediaTek Helio G80 SoC, along with an expansive 6.8-inch display, the Tecno POVA, priced at Rs 9,999, is definitely worth a second look. In this review, I will try and find out if the POVA can displace the segment leaders and carve out a space of its own. 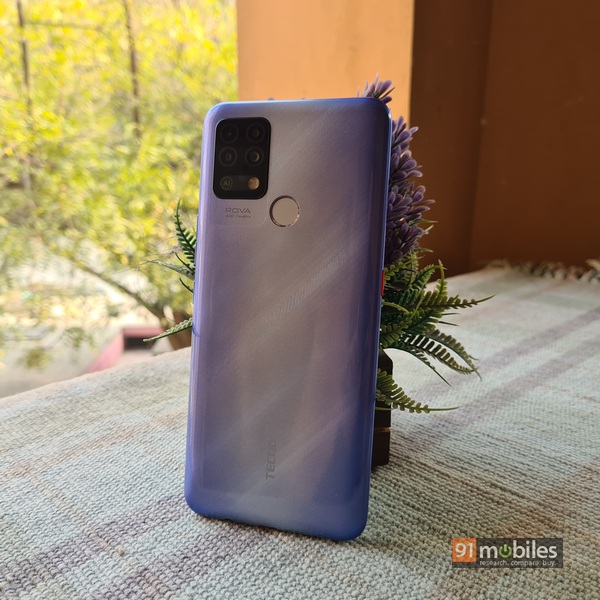 Back in the day, budget phones would come toting plain Jane designs, but that has been changing in recent times. The POVA is a good example of the same and the smartphone ships with a colour gradient finish with a glossy coating that shimmers in the light. The polycarbonate body gives the phone a light in-hand feel though the construction feels sturdy. At the rear, a big, rectangular camera housing is present on the top left which contains a quad-camera setup along with a flash module. The edges curve over the sides, like almost all phones, providing a comfortable grip in my palm. The only downside of the phone’s design is that for its rather large size, the capacitive fingerprint sensor on the phone is positioned a tad higher, making it difficult for my index finger to reach it. You also get a textured Google Assistant button on the right side along with regular volume rocker and power buttons. There is a micro-USB port at the bottom which is disappointing, given how most OEMs have transitioned over to the Type-C port. Apart from that, you get a 3.5mm headphone jack and dual-SIM slot, both present at the bottom. There is no separate speaker grille, and the earpiece doubles up as the speaker as well. 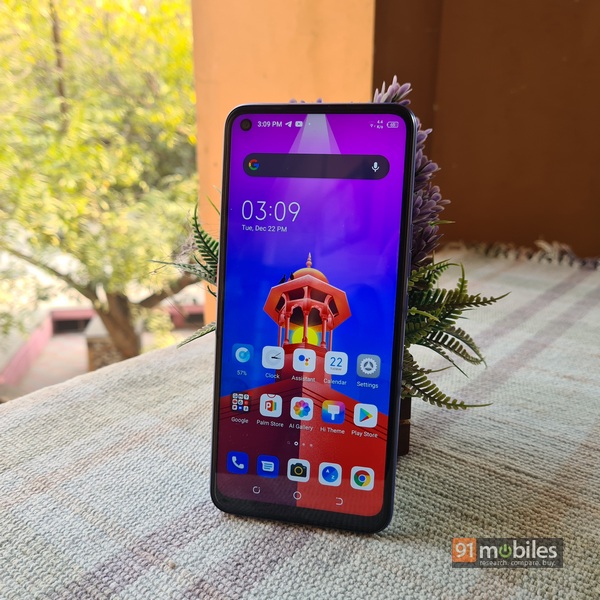 Towards the front, the phone ships with a large 6.8-inch IPS LCD panel with HD+ (720 x 1,640) resolution. The bezels surrounding the screen are pretty sizeable and there is also a rather big punch-hole notch positioned towards the top left of the screen. On the whole, there is nothing special about the phone’s display apart from its rather large surface area – sunlight legibility is not the best and the viewing angles could’ve been better too. I’m also not the biggest fan of the screen’s colour reproduction as it is a bit too contrasty when pitted against other budget phones with similar price tags. The viewing experience is not customisable apart from the usual toggles for eye care and adaptive brightness. You do get an Inadvertently mode for preventing accidental touches if the smartphone is in your pocket. The smartphone doesn’t ship with Widevine L1 certification either and therefore, your content consumption will be limited to SD quality from OTT platforms like Netflix and Amazon Prime. 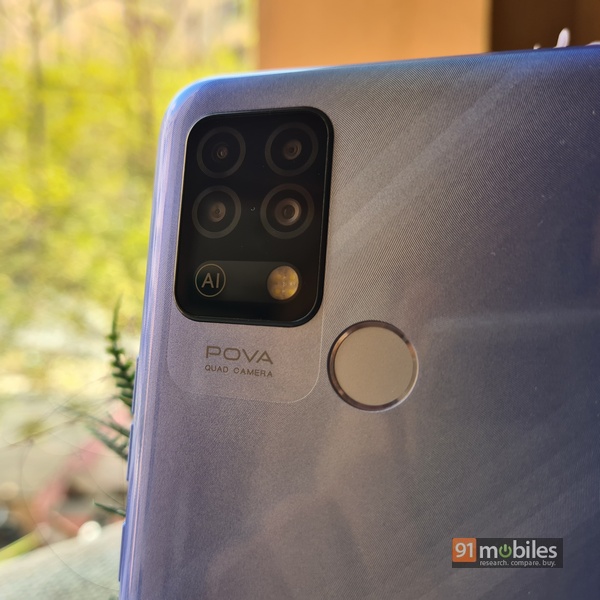 Optics-wise, the POVA packs in a quad-camera layout with a 16MP primary sensor which works alongside 2MP depth and macro sensors. There’s an AI camera present too, which uses scene recognition to boost colours and exposure in shots. Coming to the picture quality, daylight scenes shot through the Tecno POVA aren’t all that bad and the photos feature good dynamic range and a healthy amount of detailing for a budget smartphone. That said, the phone struggles to expose the frame properly if the sun is shining right behind the subject. Colours appear slightly dull, but in some cases, making sure auto HDR is turned on does the trick. Unfortunately, night photography is nothing to write home about on the Tecno POVA. There is no dedicated night mode and instead, the sensor relies on the AI camera for capturing detail. To put it mildly, night shots are just about passable in terms of exposure but the phone really struggles to latch onto the subject. There is also a lot of background noise which isn’t smoothened out. Basically, I’d recommend you stick to flash photography instead of solely relying on the phone’s AI prowess. Moving on, the macro sensor works reasonably well provided the lighting is good, but colours will still be a bit dull. The depth sensor works well for clicking portrait shots but sometimes background separation can be a bit spotty. Towards the front, the smartphone ships with an 8MP selfie shooter which clicks passable albeit slightly oversharpened photos. Portrait mode works just about fine but night time selfies lack proper focus or exposure. In essence, I have seen some very good cameras on budget phones over the past year or so, but the Tecno POVA is not one of them. 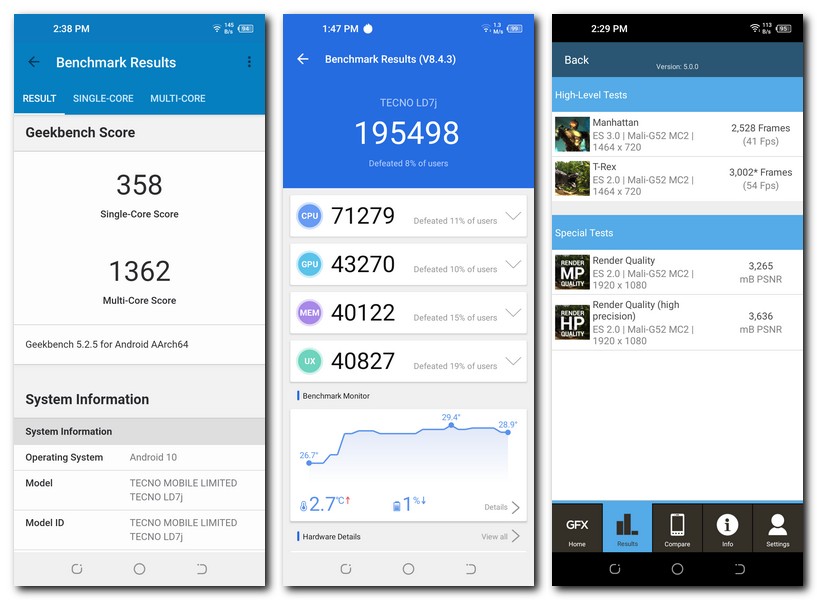 The phone houses a mid-range MediaTek G80 chipset which comfortably chews through the basic tasks and can juggle multiple apps with ease too. During my time with the phone. I always had a lot of Chrome tabs open in the background and despite that, the animations were mostly smooth while transitioning from one app to the other. The phone is a decent option for gamers too and can run graphics intensive titles like Call of Duty: Mobile at High graphics and frame rate. That being said, the phone does tend to get a bit warm to the touch, particularly when gaming sessions exceed the 1-hour mark. I have the 4GB RAM with 64GB internal storage but you can get the 6GB RAM and 128GB version for Rs 11,999.

Coming to the software side of things, the POVA runs Tecno’s proprietary HiOS which, in a nutshell, is a heavy custom skin with a ton of bloatware. You do get Android 10 but regular software updates are not really up Tecno’s alleyway considering the POVA is still sitting on the September security patch. Also, the speaker just doesn’t get loud enough and crackles at higher volumes. The fingerprint sensor does work respectably fast but the face authentication is iffy even with in good lighting. I tested the phone on Jio’s Noida network and there were no problems with regards to call quality and network speeds. 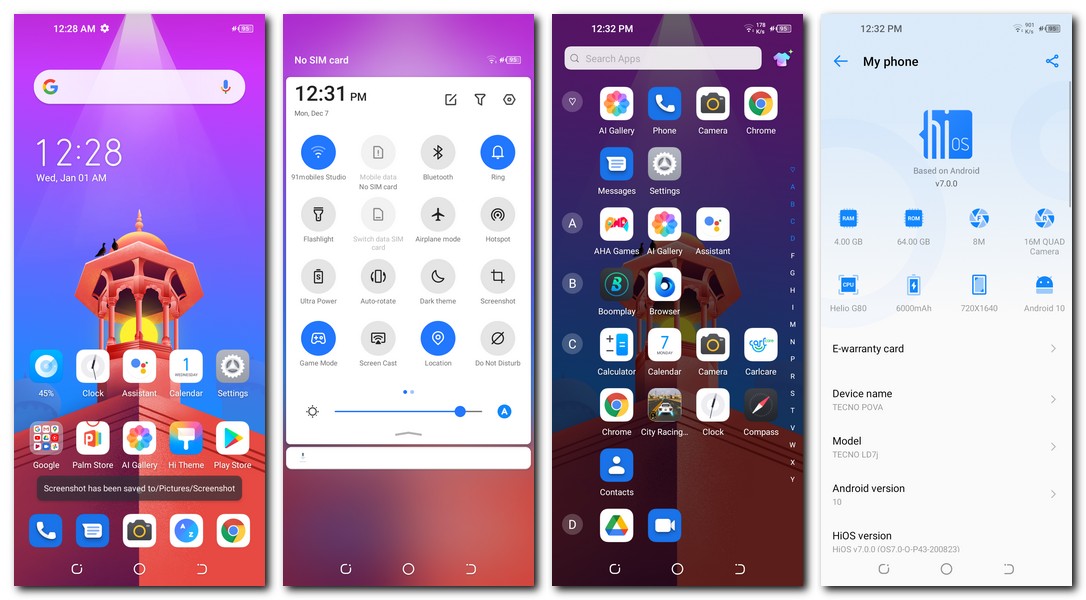 Tecno POVA’s battery is mightily impressive at 6,000mAh and it is also the device’s headlining feature. Even with heavy usage, which includes 3D gaming, the phone will last you easily for more than a day. You can easily push the phone and get almost two days of battery backup with moderate usage. What’s more, the phone ships with 18W fast charging, which is a rarity on devices retailing in the POVA’s price segment. You will be able to juice the phone up in about 2 hours and 30 minutes while a 50 percent charge will be done in about an hour. 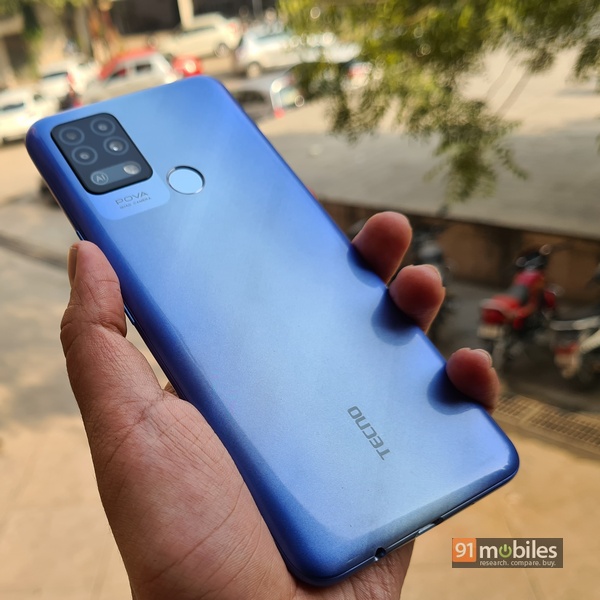 The Tecno POVA gets a few things right like its huge battery backup, reasonably fast charging and a decent chipset. The big 6.8-inch screen serves the purpose of immersive viewing but the panel itself is not very colour accurate. The software skin is a bit heavy on the phone and packs in a significant amount of bloatware. On top of that, the camera does not inspire a lot of confidence, especially at night. All-in-all, the POVA’s only winning trait is its long-lasting battery life and capable performance. If that is something you are looking for in a budget phone, go ahead with the Tecno POVA. 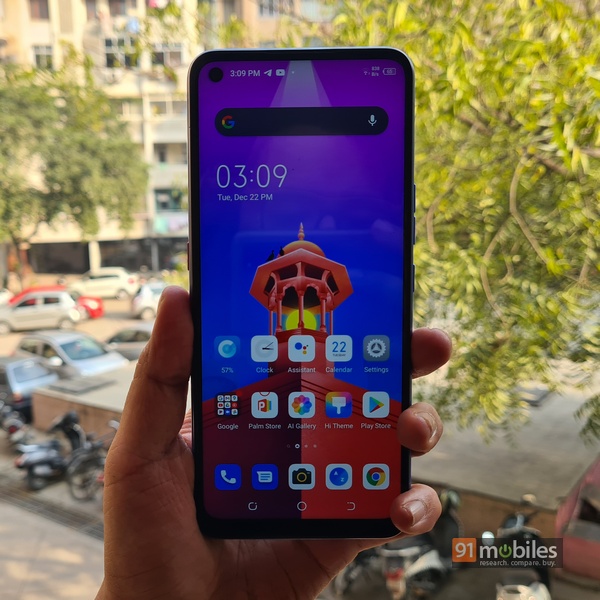