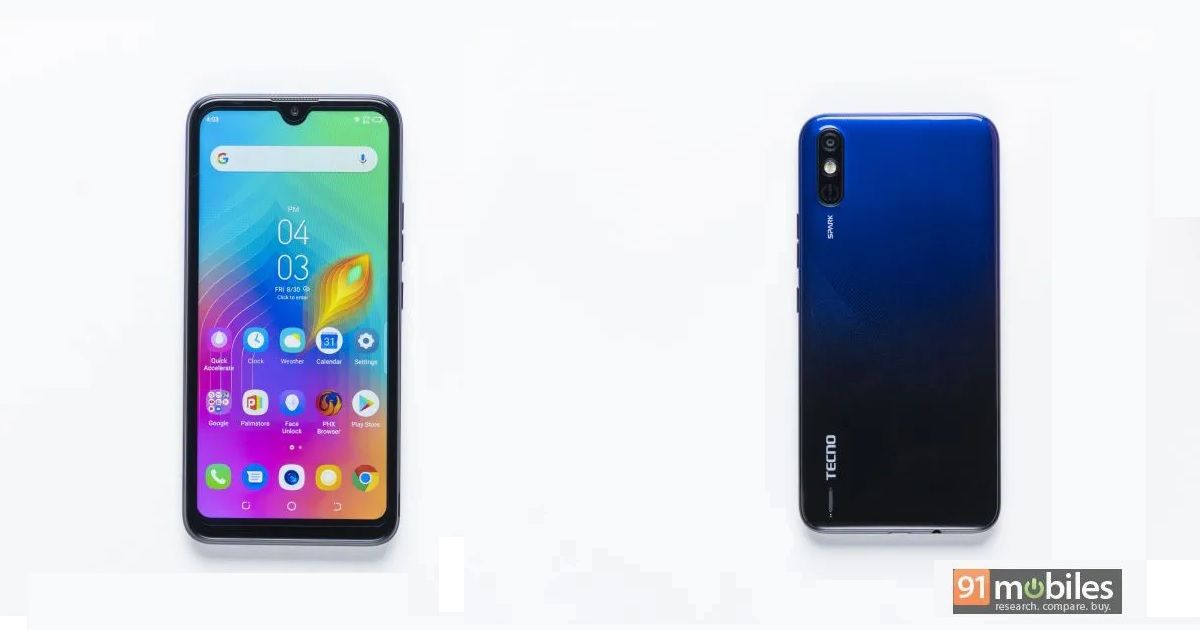 “The Tecno Spark Go is aimed at entry-level smartphone users”

Tecno has launched its latest phone in the Indian market under the Spark series called the Spark Go. The handset has arrived as yet another entry-level offering with a waterdrop notch-toting display. Targeted towards first-time smartphone users, the Tecno Spark Go is available to buy via major offline stores across the country. We got our hands on the phone, and here are our unboxing and first impressions of the handset.

The Tecno Spark Go’s retail package contains the standard wall charger and a micro-USB cable, apart from the smartphone itself. In addition, there’s a SIM ejector tool, the battery (which is removable), as well as the usual documentation like the user manual and warranty card.

Starting with the design first, the Tecno Spark Go features a glossy dual-tone finish at the rear. The phone looks appealing, but the back panel of the device is a fingerprint magnet, though you could use a clear case with it and still not lose the premium looks.

Both the back panel and the battery of the phone can be removed from the main body. The right side has the buttons to operate the phone, while the bottom houses the 3.5 headphone socket and a micro-USB port for charging. Notably, even while packing a small battery, the phone feels a tad thick around the waist and feels heavy in the hand.

Moving on to the features, the Tecno Spark Go features a 6.1-inch HD+ display with a “Dot” notch above it. The screen delivers a good media viewing experience for the phone’s price range. Under the hood, the handset is fitted with a quad-core MediaTek MT6761 processor that has a clock speed of 2.0GHz, which is capable of providing decent entry-level performance. The SoC is paired with 2GB of RAM and 16GB of storage, which is expandable.

In the camera department, the Tecno Spark Go features an AI-powered 8-megapixel primary camera at the rear and a 5-megapixel selfie snapper on the front. Notably, both the cameras are accompanied by dedicated LED flash units. The photos we captured with the handset during our brief interaction with it are not something to write home about, but that’s what you can expect from an entry-level phone. Software-wise the Tecno Spark Go boots HiOS based on Android 9 Pie. Sadly, the handset doesn’t feature a fingerprint sensor, but the Face Unlock functionality makes up a bit for it. A 3,000mAh battery keeps the package running.

Priced competitively at Rs 5,499, the Tecno Spark Go offers a decent set of specs and an appealing design. However, it will be facing stiff competition from the likes of the Redmi Go, which is an Android Pie (Go Edition) smartphone and is available starting at Rs 4,799.