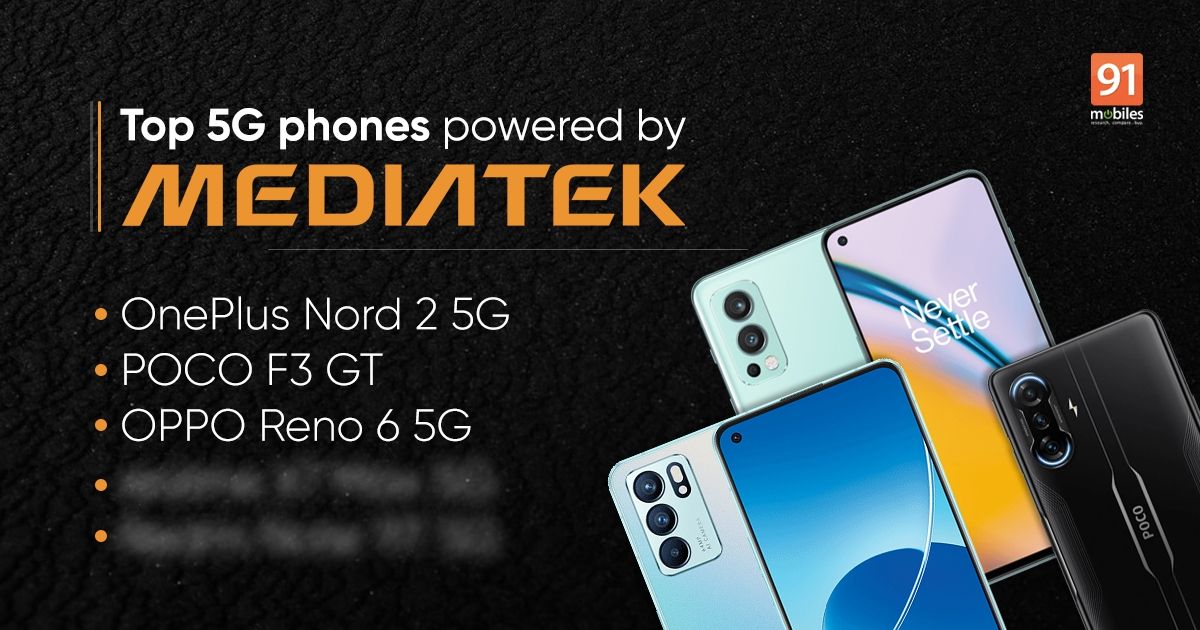 Phones powered by MediaTek Dimensity chipsets took the market by storm in 2021. Not only do these highly advanced SoCs promise powerful performance, but they come with integrated 5G modems that allow phone makers to deliver future-ready devices in both mid-range and premium segments. Now, as we gear up for the launch of 5G services in the country, let us give you a list of the best 5G phones powered by MediaTek Dimensity chipsets that you can buy between Rs 15,000 and Rs 30,000.

Xiaomi recently unveiled two new phones as part of its 11i series smartphones – the Xiaomi 11i HyperCharge 5G and the Xiaomi 11i 5G. Both these phones are powered by the MediaTek Dimensity 920 chipset that packs two ARM Cortex-A78 cores clocked at up to 2.5GHz and six ARM Cortex-A55 cores clocked at up to 2GHz. The chipset not only delivers phenomenal performance but also enables 5G, brings support for smart adaptive high refresh-rate displays, multi-camera setups, AI camera features, and more. Taking advantage of the MediaTek Dimensity 920 chipset, both the Xiaomi 11i Series 5G smartphones pack a 120Hz AMOLED display and 108MP trip camera setups.

The phones also come with dual symmetrical stereo speakers and 3.5mm headphone jacks, which is quickly becoming an exception. The only thing that differentiates these devices is the battery capacity and charging technology. The Xiaomi 11i HyperCharge 5G comes with Xiaomi’s HyperCharge technology that allows the phone to charge at a whopping 120W, getting the phone to a hundred percent in only 15 minutes. The normal Xiaomi 11i 5G comes with 67W TurboCharge, which is also, one of the fastest in the market.

The OnePlus Nord 2 5G gets a specially designed version of the MediaTek Dimensity 1200-AI chipset, which is focused on offering enhanced AI capabilities. Created under the MediaTek Dimensity 5G Resource Architecture program by OnePlus and MediaTek, the Dimensity 1200-AI chip brings several AI-based photography and videography enhancements. For a device priced at just Rs 27,999, the OnePlus Nord 2 5G packs a punch with features that include a 6.43-inch FHD+ 90Hz display, up to 12GB of RAM, a 4,500mAh battery with 65W fast charging, and a 50MP camera accompanied by an 8MP ultra-wide shooter and a 2MP monochrome sensor. 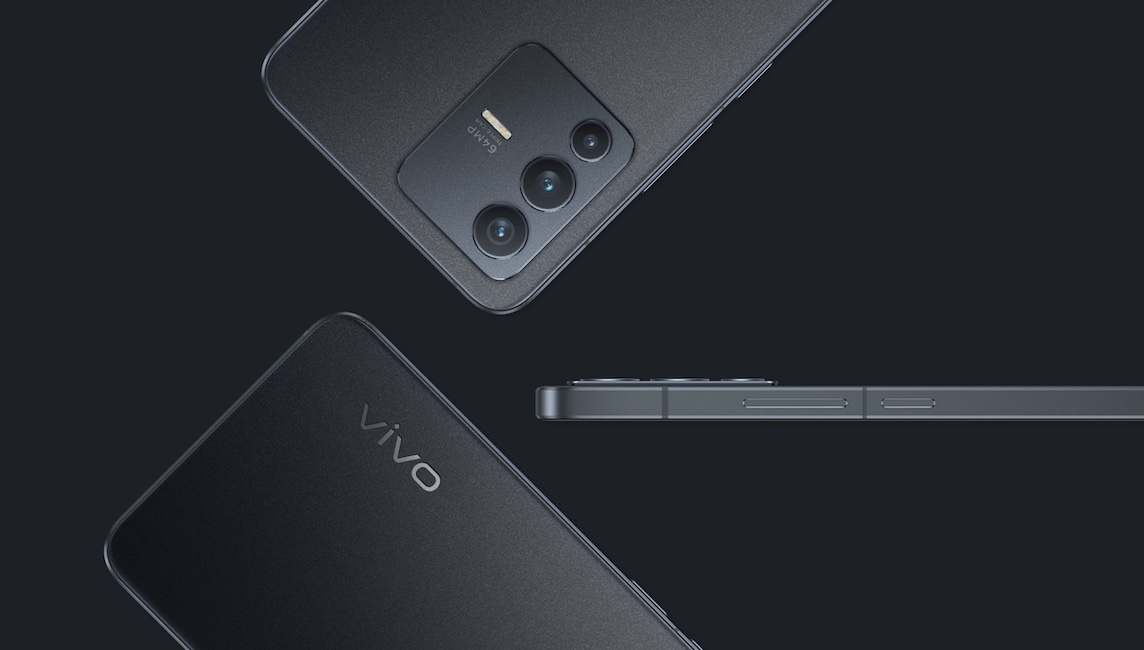 vivo also unveiled its latest V23 5G smartphone that’s using the latest MediaTek Dimensity 920 chipset. The phone looks gorgeous and is India’s first phone to use colour changing Fluorite AG glass that changes colour based on ambient light. The phone is also only 7.5mm thick, making it one of the slickest phones on the market. The vivo V23 5G is also India’s first phone to ship with a 50MP Eye AF dual selfie camera that captures colour accurate selfies even at night. This phone will be heaven for selfie lovers and vloggers who need a powerful selfie camera. You also get a 64MP triple camera system at the back, a 4,200mAh battery with 44W fast charging, up to 16GB RAM thanks to Extended RAM 2.0 technology, and more. If you want a powerful smartphone inside a thin and beautiful package, check out the vivo V23 5G. 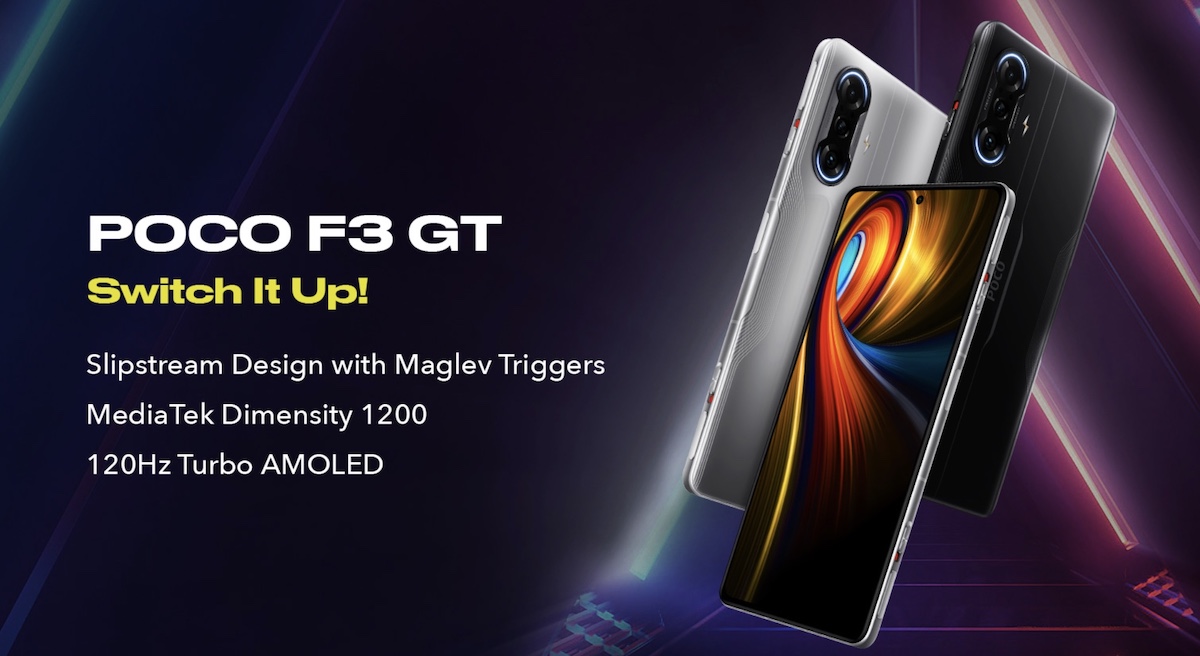 It’s unbelievable that Xiaomi has managed to price the POCO F3 GT below Rs 30,000. It’s got a 120Hz AMOLED display with a 480Hz touch sampling rate. It also packs Maglev Triggers that give you an edge during frantic gaming sessions. Moreover, this 5G phone comes with a 5,065mAh battery with 67W fast charging support. Its 64MP triple camera setup is a highlight as well. The fuel to run all this hardware is delivered by the MediaTek Dimensity 1200 chip, which delivers snappy performance and excellent graphical output while gaming.

Thanks to the 3GHz octa-core processor and the Mali-G77 MC9 GPU, this phone never stutters or lags. The gaming performance is further enhanced by the MediaTek HyperEngine 3.0 Gaming Technology onboard the chipset. It brings features like ray tracing in games, multi-touch boost, ultra-low latency wireless audio, and more. Whether playing games or just managing day-to-day productivity tasks, this phone will fly through everything. 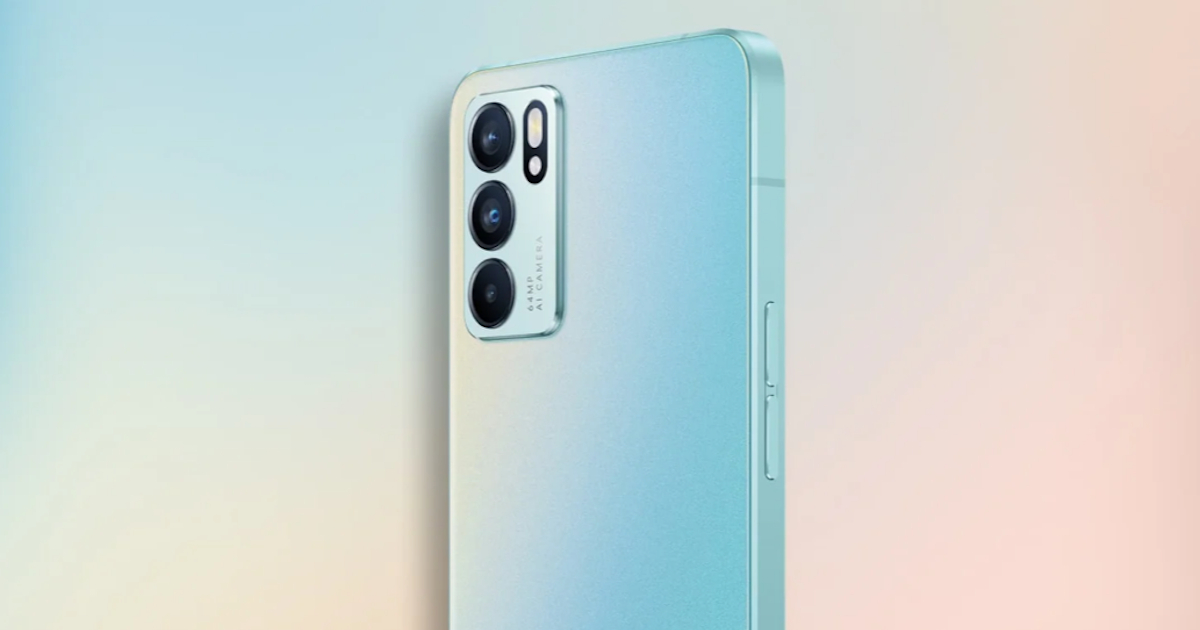 The OPPO Reno6 5G was the first smartphone in India to sport the MediaTek Dimensity 900 chipset. The 6nm chip delivers powerful performance, while its MediaTek 5G UltraSave feature brings power-saving technologies to the mix. The phone is known for its stellar videography features, including AI Highlight Video, AI Color Portrait, and more. Another USP of this device is its exclusive and eye-catchy Reno Glow design. The phone is also super thin, which adds to its premium look. Other standout features of the phone include a 90Hz AMOLED screen, Z-Axis Linear Motor, eye care display, and 65W fast charging. 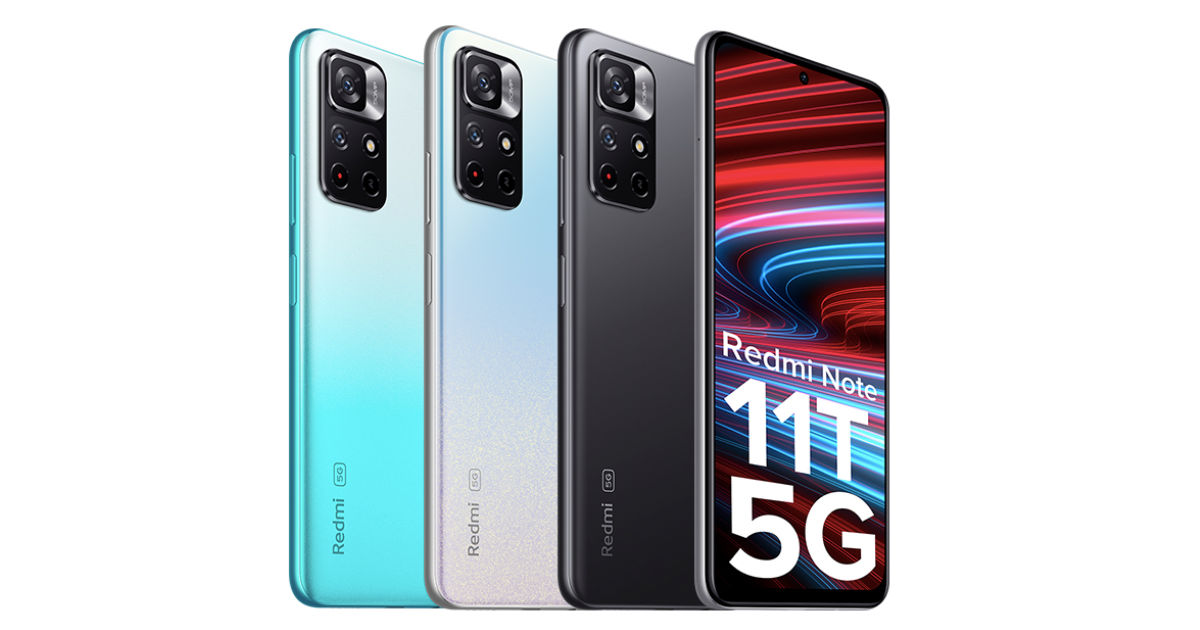 Xiaomi’s Redmi Note 11T 5G is all about its value for money offering. The dual SIM 5G phone carries a 50MP + 8MP camera setup on its back and a 16MP selfie camera on its front. Its 5,000mAh battery supports 33W fast charging. The phone’s display is 6.6 inches in size and bears a refresh rate of 90Hz. Powering this device and making all these features possible is the MediaTek Dimensity 810 chipset. The Redmi Note 11T 5G also makes the most of the MediaTek HyperEngine 2.0 technology to offer intelligent resource management, smoother graphics and reduced load times while playing games. 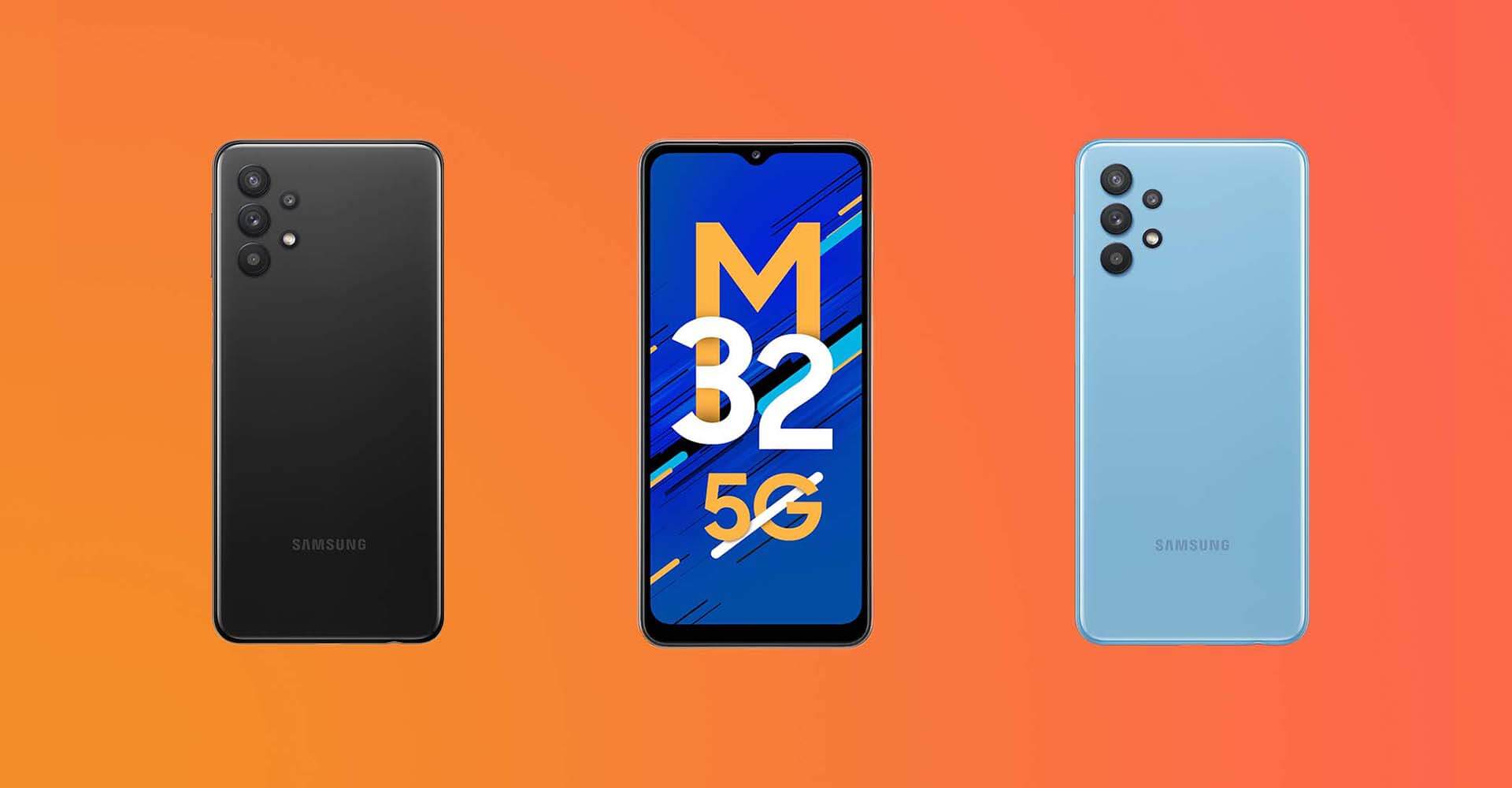 At the heart of this Samsung smartphone is the powerful 7nm MediaTek Dimensity 720 chipset. Apart from being a power-efficient 5G chip, this SoC has an integrated modem that brings support for 12 5G bands. This makes sure that when 5G does arrive in India, your preferred carrier’s services will be easily accessible to you. The phone also grabs up to 8GB of RAM and packs a delightful 48MP quad-camera setup on its back. The Samsung Galaxy M32 5G‘s battery is a 5,000mAh unit that ships with 15W fast charging support. 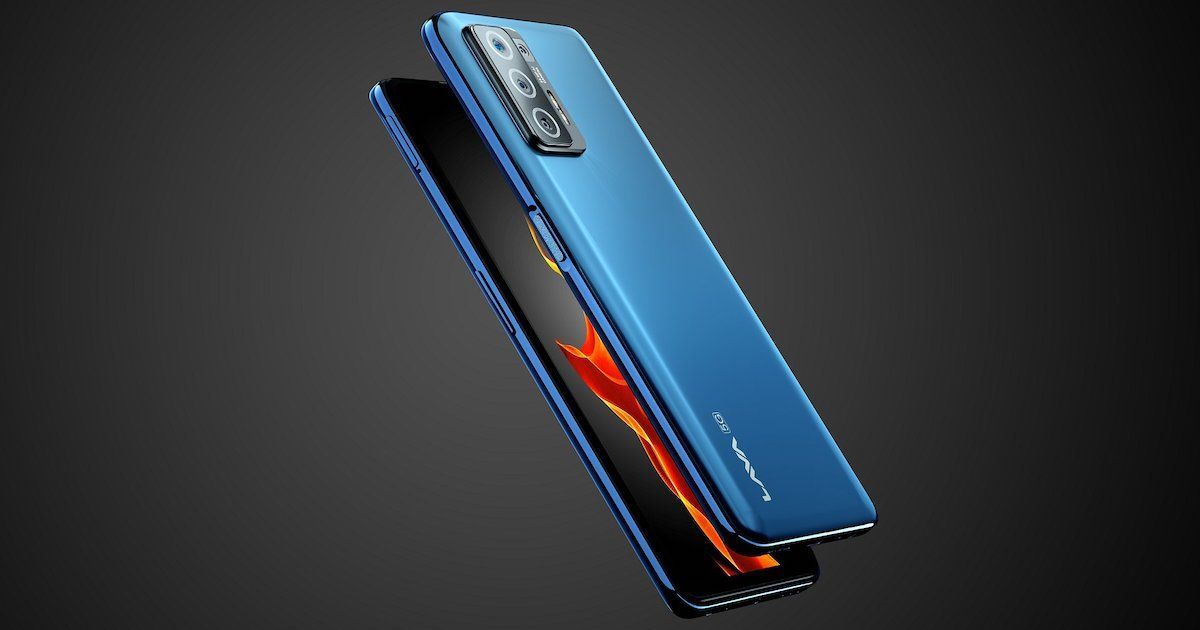 The Lava Agni 5G was a surprisingly good phone to come out this year. Being the first 5G phone made in India, a lot was riding on its success, and we are happy that it delivered. The device’s advanced offerings were made possible by its adoption of the MediaTek Dimensity 810 chipset. It offers excellent performance thanks to the 2.4GHz octa-core processor. Moreover, this SoC’s support for high refresh rate displays allowed Lava to equip the Agni 5G with a 90Hz FHD+ panel. Other notable features of the phone include a 64MP quad-camera setup, a 5,000mAh battery with 33W, and more.