“Our take on Vivo’s latest affordable handset – the Vivo S1”

It would be right to presume that smartphone manufacturers are invested in a two-front war, and in order to come out on top, brands must have a strong offline as well as online presence. While some Chinese OEMs like Xiaomi started their journey with online retail before venturing into offline, others like OPPO and Vivo entered the offline arena first. To further fortify its presence in the country, Vivo recently announced its S-series of smartphones, which will cater to buyers who want to hold a phone in their hand before reaching for their wallet. The debut device in this range is the S1, which has been in my pocket for a week. And, after testing it intensively, here’s what I make of the phone.

Here’s the thing – I’ve come to expect too much from the design of affordable handsets, and for good reason. Smartphones like the Realme X and the Redmi K20 have greatly upped the ante when it comes to a phone’s overall looks and therefore, I expect other manufacturers to follow suit as well. To that extent, the Vivo S1 didn’t fail to bedazzle me with its gradient back design and its peppy blue hue. Coupled with the golden accents around its camera module, and an eye-catchy diamond pattern finish on its back, the S1 is among the best-looking handsets in the affordable segment right now. 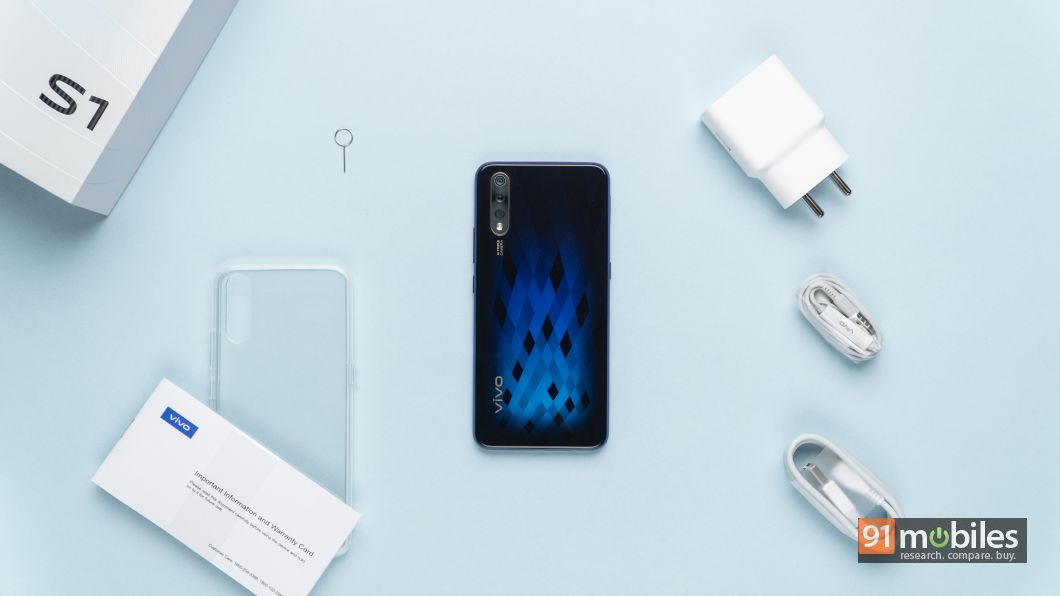 Unfortunately, as good as the phone looks, its design is not without its flaws. For starters, the phone still ships with an archaic micro-USB port as opposed to the newer Type-C standard which many of Vivo’s competitors have adopted. Furthermore, the S1 has a noticeable camera bump and the phone rattles if you try to use when it’s kept flat on the table. Lastly, you’ll have to spend a good chunk of time wiping the back of the device as it smudges really easily. 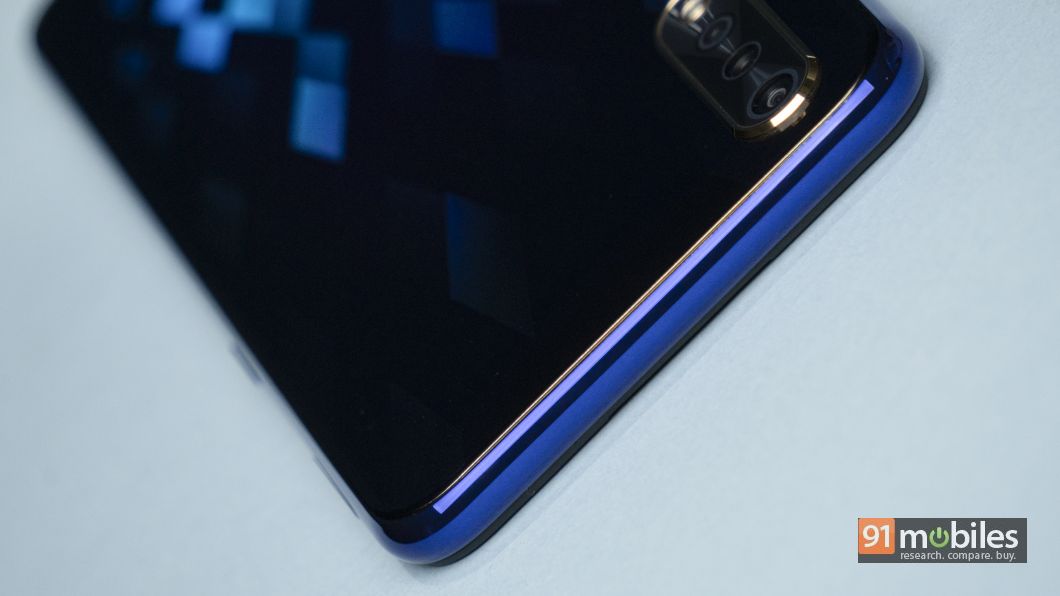 Thankfully, the company rights some wrongs by making the S1 delightfully one-hand friendly. The phone features chamfered edges and a curvy trim which allowed me to grip it comfortably. I could even reach the top edges of the phone and pull down the notification bar whilst commuting in a metro, which speaks volumes about the device’s ergonomics. Also, if you’re still using wired earphones, then you’ll appreciate the presence of a headphone jack on the Vivo S1. 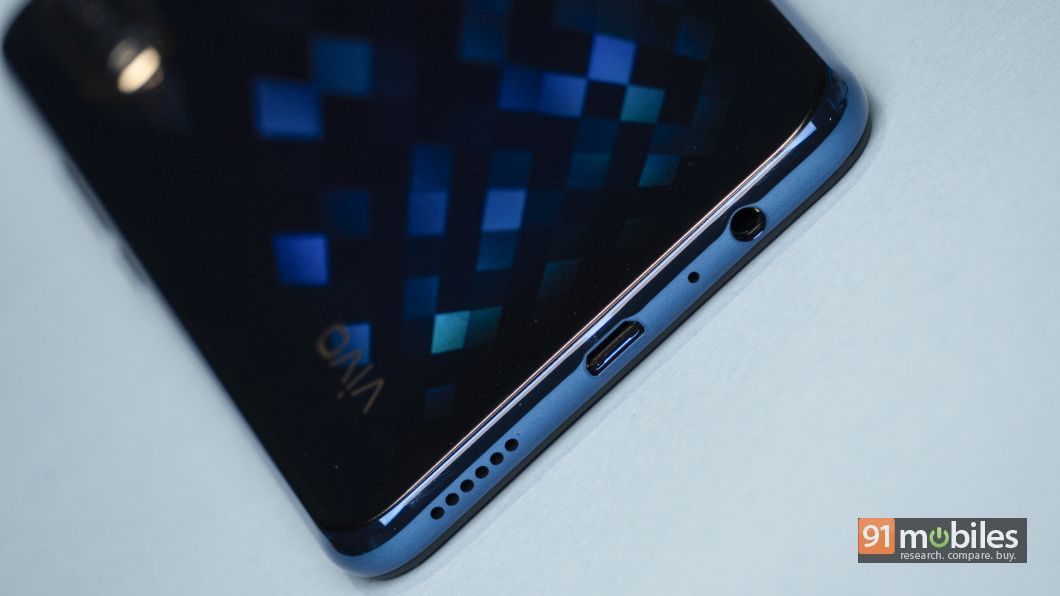 As for the display, the Vivo S1 ships with a 6.38-inch FHD+ panel with a waterdrop notch positioned at the centre. What’s more, the panel makes use of Super AMOLED tech, meaning you’ll be able to feast your eyes to vibrant colours and crisp contrast levels too. Correspondingly, watching movies or videos on the S1’s display was an absolute treat, as the screen offered an unobtrusive media consumption experience and rich colours. Furthermore, the display got satisfactorily bright too and therefore, I didn’t struggle to use the smartphone under the sun either. 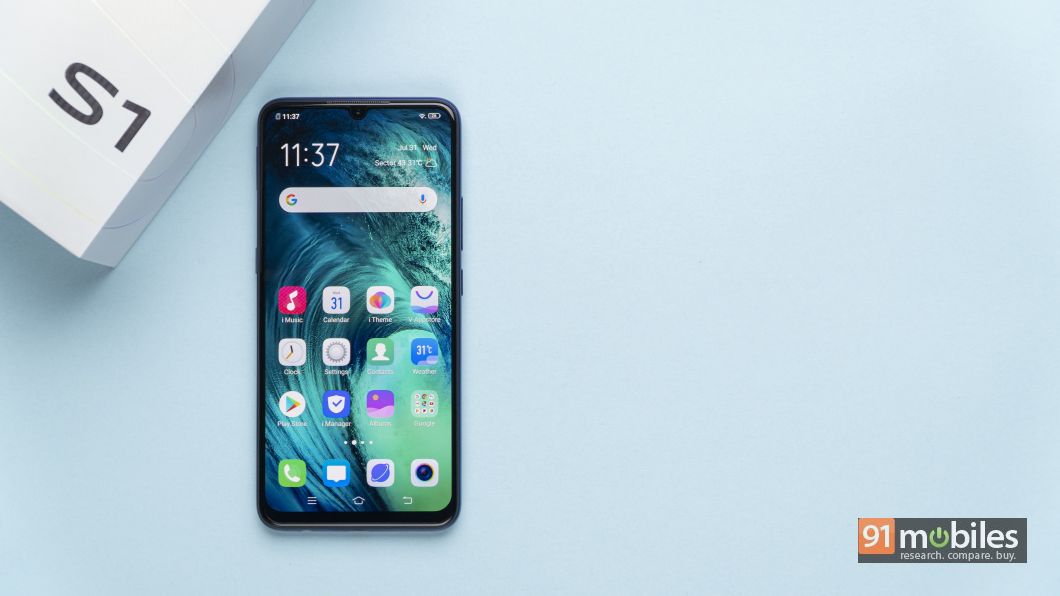 Now, for security, the Vivo S1 gives you two options – you can either unlock the smartphone using the in-display fingerprint scanner, or use face unlock to get into your home screen. As for the former, the sensor worked without any hiccups and the unit felt accurate and consistent during my testing. However, I mostly relied on the face unlock feature during my time with the phone as it was blazing fast. 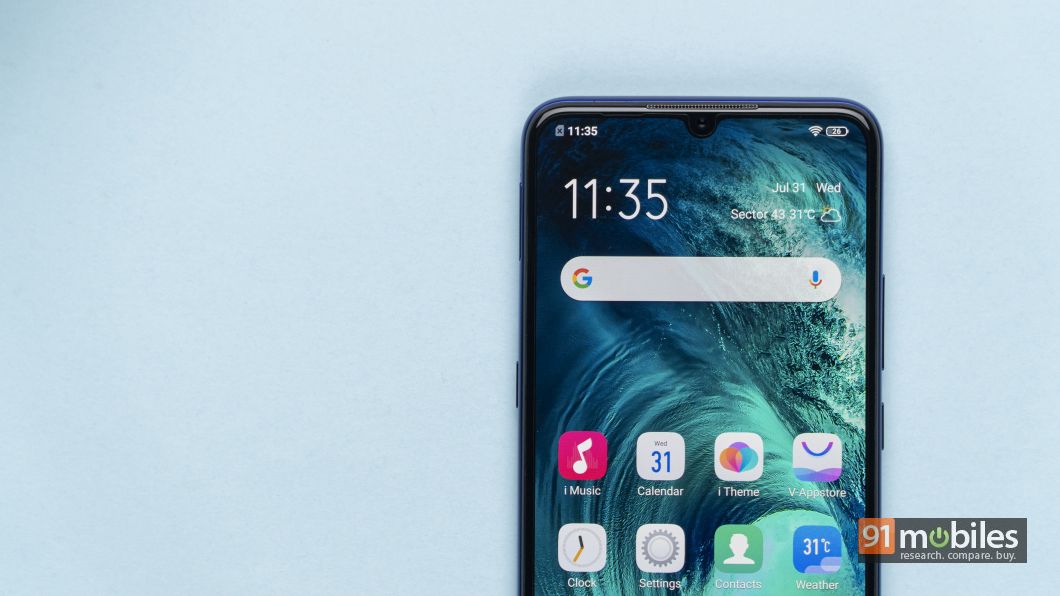 You see, unlike the competition, the S1 doesn’t ship with a pop-up selfie camera, which means you do need to contend with the tiny notch on the display. However, this works wonders for face unlock. Since the front camera doesn’t have to pop up and down, I was able to unlock the S1 quicker than I could on the Realme X (review), the OPPO K3 (review), and even the Redmi K20 (review), all of which do have pop-up cameras.

It’s not rare to find an affordable phone with multiple camera sensors nowadays. On that note, the Vivo S1 brings four cameras to the playground, one of which is positioned on the front whereas the other three take up space at the back of the phone. The selfie camera ships with a 32MP sensor with f/2,0 aperture, whereas the rear camera setup integrates 16MP, 8MP and 2MP sensors with f/1.78, f/2.2 and f/2.4 apertures respectively. 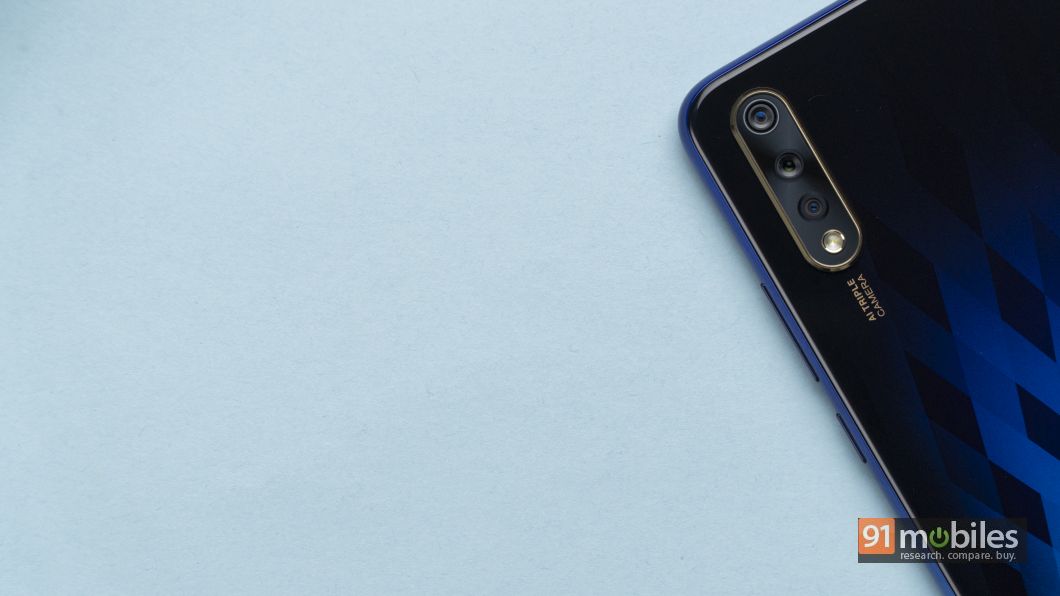 Now, there are things I like about the S1’s cameras and some things which I feel that the company could’ve done better. I’ve summed up my experience with the phone’s camera below, so take a gander –

2. Much like most other devices in this price range, the Vivo S1 botches reds too. Case in point, the photo of the red flower in the gallery wherein it’s hard to make out the shape of the petals.

3. The S1’s camera let me down consistently owing to its finicky focusing. In fact, the camera lost track of the subject upon the slightest movement and therefore, you’ll have to be extremely patient whilst clicking photos with the phone.

4. Coming to the overall detailing in the shots, the S1 leaves something to be desired there too. You see, despite shipping with a 16MP main sensor, the phone’s rear camera seldom clicked photos which didn’t blur the second I zoomed in. To give you a better picture (no pun intended), here’s a photo I took with the Realme X (in standard mode) as well as the S1. On face value, the shots look more or less the same, but if you zoom into the photos, you’ll notice that the leaves in the foreground, as well as the tree towards the back looks better through the lenses of Realme’s offering. 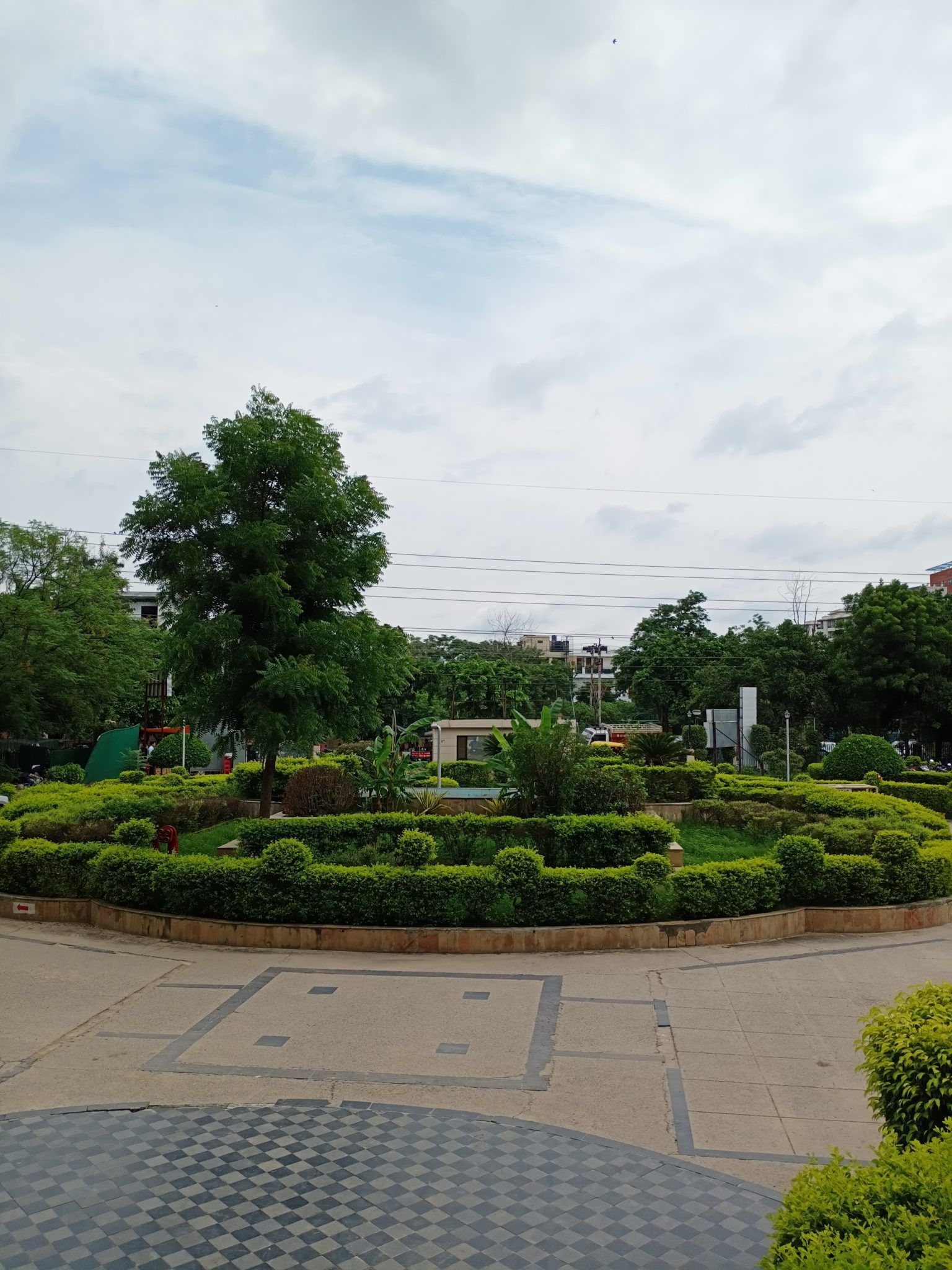 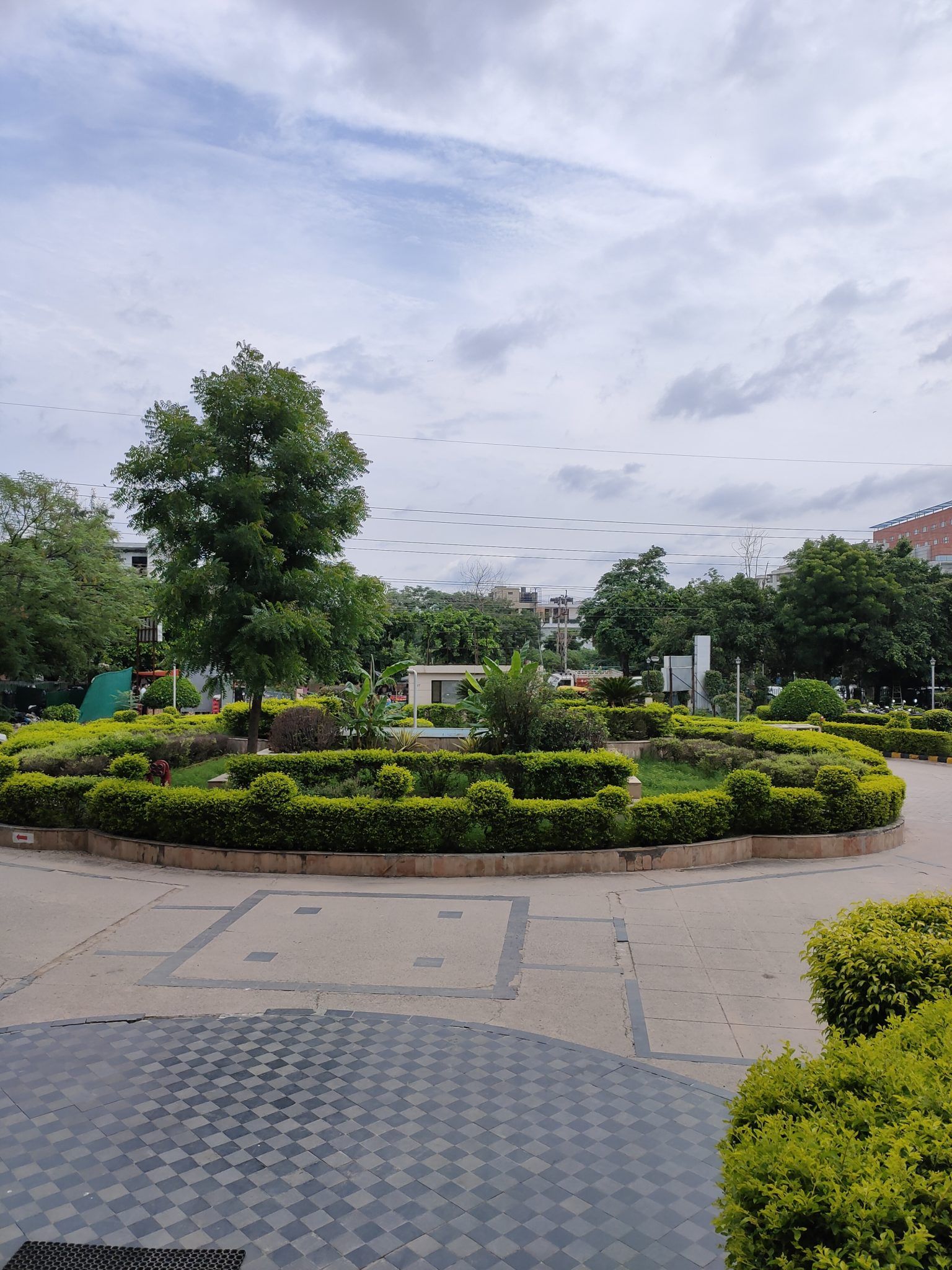 5. With more and more smartphone manufacturers leveraging the power of software to better the quality of lowlight photos, it’s a bit disappointing to see that the S1 misses out on a dedicated night mode. Consequently, shots taken at night have considerable noise in them, and despite using the built-in LED flash, I struggled to capture a gram-worthy photo with the S1 in a dimly-lit environment.

6. The 32MP selfie shooter, on the other hand, surpassed my expectations. The phone clicked stunning selfies during the day which were rich in details and colours, and the camera even held its own after the sun had set. That being said, I was a bit disappointed with the bundled portrait mode for the front shooter as it created weird artefacts around the subject’s face. However, I am willing to chalk this up as a software issue and hope the company fixes it soon.

The Vivo S1 marks an industry first as it’s the first device to be powered by MediaTek’s Helio P65 processor. The octa-core chip has been clocked at 2GHz and works alongside 6GB of RAM and a 128GB of built-in, user-expandable storage. Now, for the S1’s price, you can instead opt for a smartphone with Qualcomm’s Snapdragon 710/712 processor, which do perform better when it comes to synthetic benchmarks. For instance, take the similarly-priced Vivo Z1 Pro (review), which is backed by the Snapdragon 712 chip. The handset secured 1,85,063 points in Antutu’s 3D benchmark, leaving the S1 to play catch up with a score of 1,46,716 points. 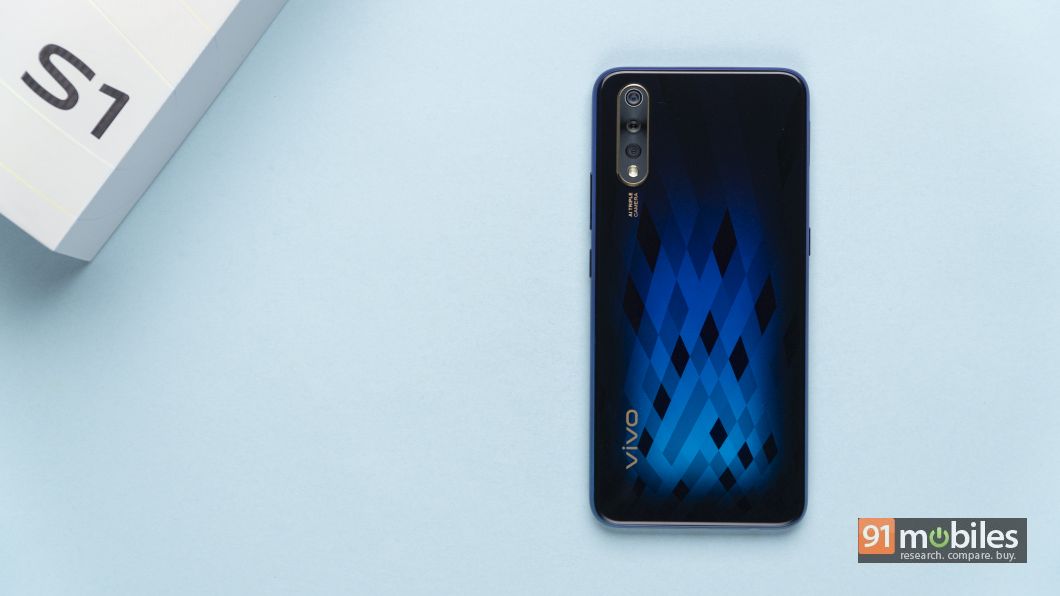 Benchmarks aside, I never felt that the S1 was slowing me down during my time with the phone. I could comfortably jump in and out of applications, play casual games like Clash Royale without any hassles and even run intensive titles like PUBG on the phone. Suffice it to say, while it might not be the fastest phone for the price, it still gets the job done. 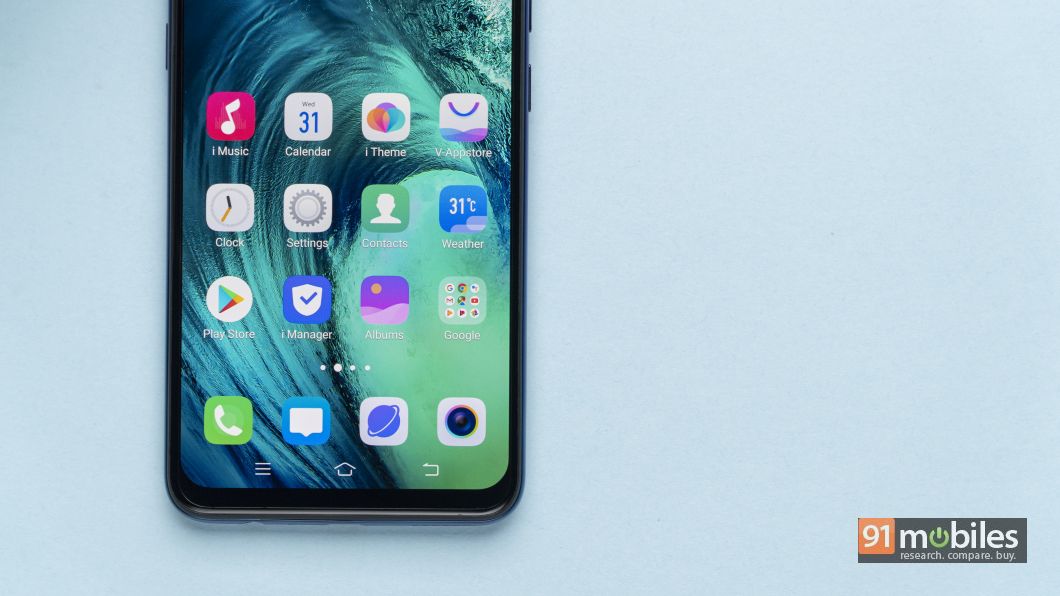 Software-wise, the S1 boots a custom skin of FunTouchOS v9 on top of Android Pie. The custom skin has been designed to mimic Apple’s iOS software and it comes with a ton of bloatware. Thankfully, most of the bundled apps can be uninstalled, but I would still have preferred a cleaner skin, to begin with. That besides, the custom UI does ship with some nifty features, including a dedicated one-handed mode and numerous gestures which make toggling system functions (like flashlight) easier. On the whole, while I’m not a proponent of custom skins layered on top of Android, the S1’s interface was, for the lack of a better word, usable. 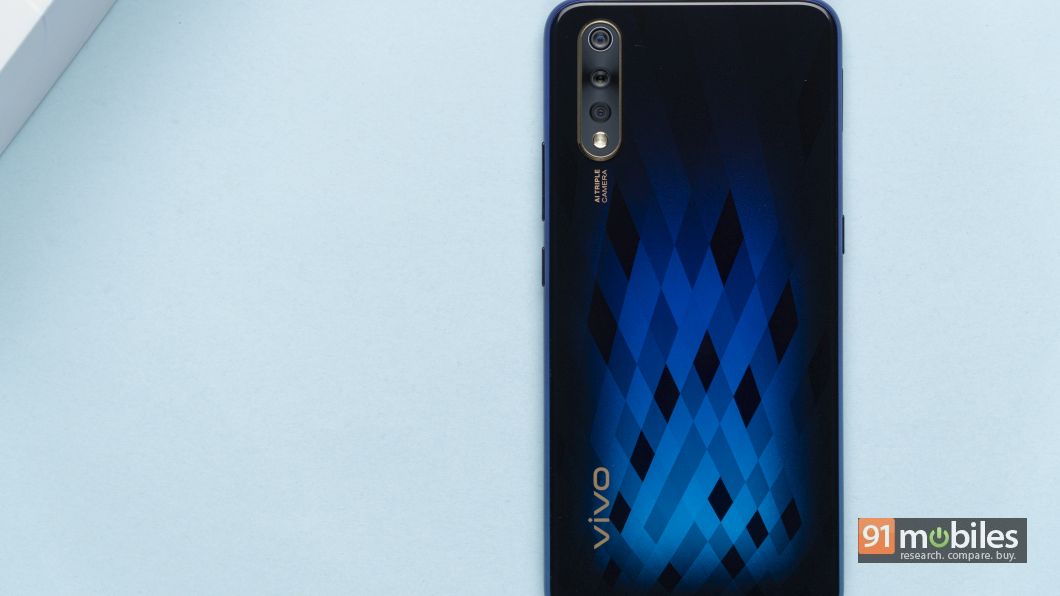 If there’s one thing I can say about the S1, it’s that the phone has fantastic battery life. The device is fuelled by a 4,500mAh cell which lasted me over a day with heavy usage. To give you a better picture, the smartphone lasted close to 19 hours in our battery loop test, which is a phenomenal figure and took a little under two hours to charge completely. Rest assured, you’ll seldom find the battery life of the S1 dip below the ten percent mark after the end of a day. Interestingly, the Vivo S1’s battery can be used to charge other devices by means of an OTG cable. Therefore, you can easily charge devices like your smartwatch, or your Bluetooth earphones if their battery is on its last leg.

The Vivo S1 retails for a starting price of Rs 17,990 and for the price, offers a good-looking design, long-lasting battery life, and dependable performance. Unfortunately, the handset’s pricing pits it against devices like the Realme X, the OPPO K3 and the company’s own Vivo Z1 Pro, which offer better performance to boot, along with sharper cameras at the back. 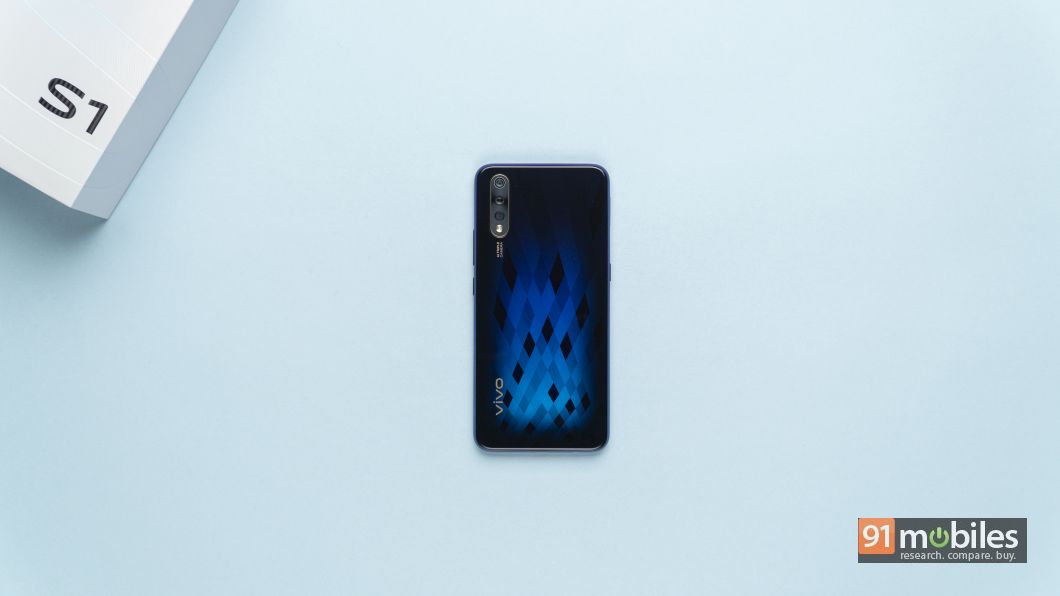 This puts the S1 in a tough spot and overshadows the convenience of being able to pick up the phone from your nearest retail outlet. Therefore, despite bringing some quality features to the table, it’s difficult to recommend the S1 owing to the cutthroat competition in the affordable space right now.