Realme and Redmi enjoy the biggest slice of the sub Rs 20K smartphone segment in India, though the scenery could change soon. I say this because Chinese tech giant Vivo recently announced a brand new smartphone range to sway budget-conscious buyers over to its doorsteps. Dubbed the Vivo T series, the lineup puts performance first and hopes to rival the best mid-rangers in the affordable segment. The Vivo T1 5G is the harbinger for the latest range and the smartphone comes toting goodies like a 120Hz screen, Qualcomm’s Snapdragon 695 SoC and the works. So, let’s take a closer look at the phone to see if it’s worth your bucks.

Vivo’s T series debutant – the T1 5G – gets a few things right and offers a stylish design along with reliable performance. That said, despite the company’s commendable attempt, the smartphone has a lot of scope for improvement and would’ve been better off with a brighter screen and a more diverse camera stack.

The Vivo T1 5G cuts a handsome package, especially in the Rainbow Fantasy colourway sent to me for review. As its moniker suggests, the handset employs a colourful gradient that exhibits different shades of blue and orange depending on how light impacts the back of the phone. What’s more, the smartphone offers a boxy design that is replete with a flat frame and a levelled back. The unit’s squared-off camera module helps the device stand out that much more and all things considered, the Vivo has done a commendable job with the design of its latest contender. 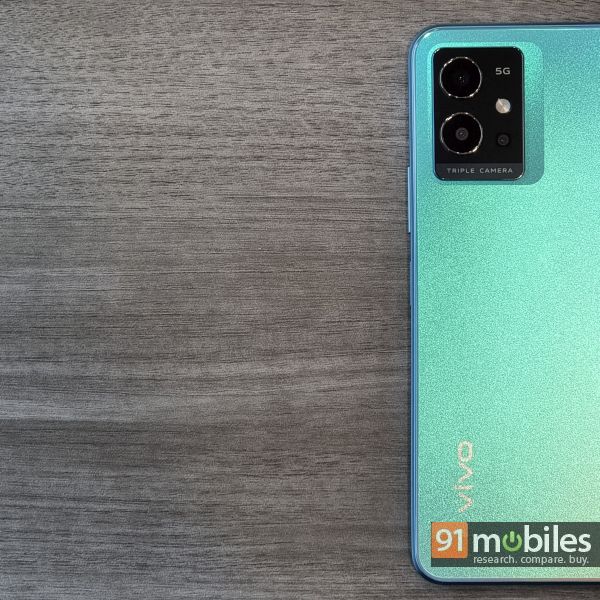 Interestingly, the smartphone’s plastic build is not immediately apparent, which speaks volumes about the T1 5G’s in-hand feel. The back of the phone offers a smooth, velvety finish, and the handset’s blocky frame imparts a confident in-hand grip too. So much so, I never felt the urge to baby the phone and used the device without a case during my review period. I’d also like to add that unlike the majority of phones in the affordable segment, the T1 5G features a matte finish and correspondingly, the back of the phone staves off smudges quite well. 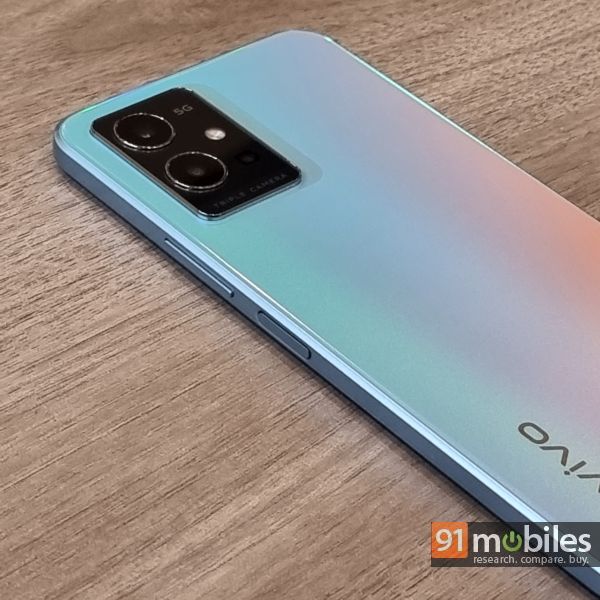 If anything, I would’ve liked to see the smartphone’s display merge seamlessly into its frame. As things stand, the device ships with a black housing of sorts that protrudes from the phone’s rails to hold the screen in place. Other than that, the Vivo T1 5G’s design is aces in my books. Moving on, let’s take a closer look at the smartphone’s I/O and here, the device ships with a capacitive fingerprint sensor embedded underneath the power button. The sensor worked admirably during my time with the phone, so no complaints here. That said, if you aren’t accustomed to using a side-mounted fingerprint scanner, then you can also opt in to unlock the phone by means of facial recognition, which worked just as well. Towards the bottom, the smartphone features a USB Type-C port sandwiched between a 3.5mm audio jack and a mono speaker grill. 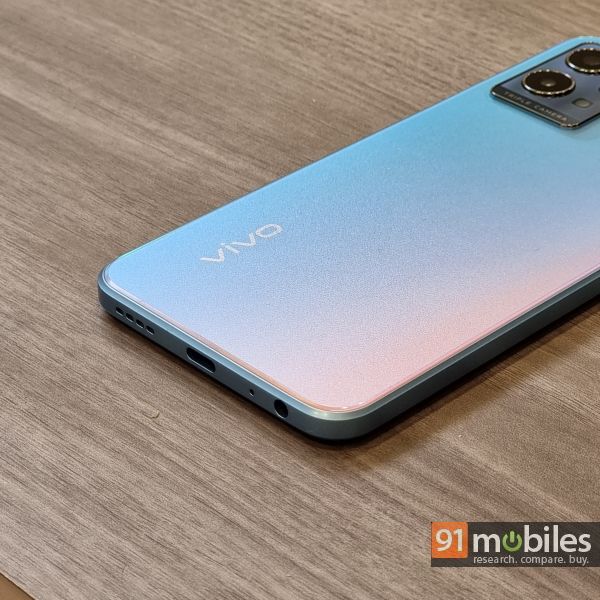 Much to my dismay, the speaker’s audio output was not up to the mark. For one, you can’t easily cup the grill when using the phone in landscape mode whilst streaming movies or playing games. Furthermore, the audio from the phone offers no stereo separation either. You should also know that the T1 5G’s haptics leaves a lot to be desired and the feedback is quite mushy. Other than that, the device features a SIM tray up top, along with a clicky volume rocker positioned on its right-hand spine.

The Vivo T1 5G ships with a 6.58-inch, FHD+, In-cell LCD display. The panel offers a refresh rate of 120Hz and a touch sampling rate of 240Hz, making it plenty fluid and responsive to play high-octane games on the fly. I quite like that Vivo gives buyers the option to variate the display refresh rate between 60Hz, 90Hz and 120Hz, allowing you to extend your battery backup that much more if you’re running low on juice. That said, the display is bordered by rather chunky bezels. In fact, the frame holding the display makes the bezels seem a tad more pronounced. Adding to the list of woes, the panel ships with a waterdrop notch that takes more space than its punch hole counterparts too. 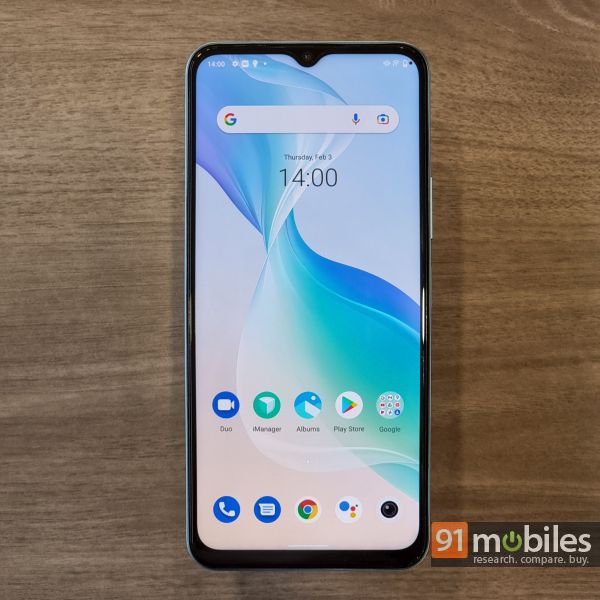 On the bright side, you won’t notice these issues once you start using the phone day in and day out. Having said that, I wish the company would’ve offered a higher brightness preset with the phone. As things stand, the T1 5G’s screen maxes out at 460 nits, which doesn’t quite cut it when viewing the panel under harsh sunlight. Furthermore, while the phone ships with Widevine L1 certification, the device cannot relay HDR media from OTT services like Netflix.

The Vivo T1 5G ships with a triple camera setup at the back, comprising a 50MP Samsung JN1 sensor that works alongside a 2MP macro shooter and a 2MP depth lens. For selfies, the device gets a 16MP selfie camera up front. 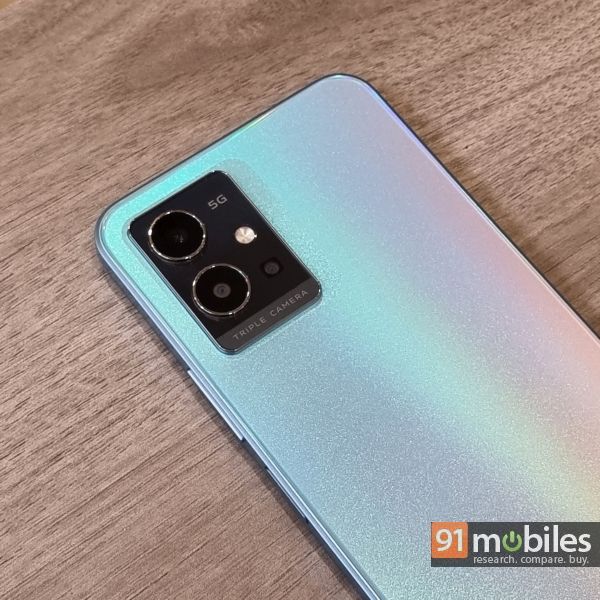 The T1 5G’s primary camera clicks quality photos during the day with ample details in the frame. That said, the camera’s colour science sways in favour of punchy, vibrant tones so you’ll rarely find the shots to be an accurate representation of the scene. Thankfully, the device brings out the shadows in the frame quite well and the sensor latches on to the focus quickly too. At night, however, the quality of the photos takes a steep dip and despite turning on the dedicated night mode, I noticed the images were flush with noise. The selfie camera, on the other hand, clicks fantastic self-portraits that are replete with details. The images offer excellent sharpness at a closer crop and the smartphone manages to reciprocate the subject’s skin tone to a tee too. That said, you might want to keep an eye out on the beautification filters when snapping images in portrait mode. Speaking of which, the portrait shots look stellar as well and the smartphone can comfortably map a subject’s unruly hair or articles of clothing, thereby ensuring the blur effect doesn’t encroach upon the bits that should be in focus. 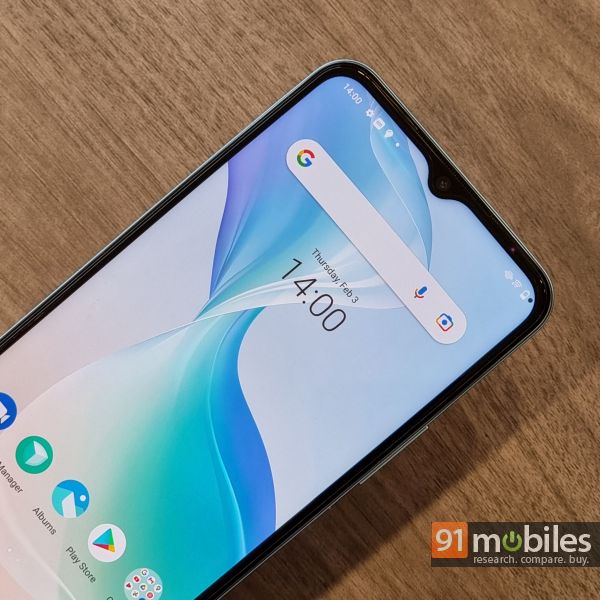 Unfortunately, the Vivo T1 5G doesn’t ship with an ultrawide angle or a telephoto sensor. Instead, the handset offers a 2MP macro sensor that lets users snap extreme closeups of subjects. As for videos, the phone can record clips in up to 1080p resolution at 30 or 60fps. The handset’s video shooting capabilities aren’t the best in the segment and the smartphone introduces a lot of jitteriness in the frame. Consequently, if you do plan on shooting videos with the phone, I’d recommend you opt for a handheld tripod to stabilise the clips.

The Vivo T1 5G is powered by Qualcomm’s Snapdragon 695 processor which works alongside UFS 2.2 storage and LPDDR4x memory. Now, I’ve already spoken at length about the Vivo T1 5G’s performance in a comparison article where I pit the SoC against the Dimensity 810 and Snapdragon 680 chipsets, so do check it out. But, for the purpose of this review, you should know that the T1 5G is a capable performer and buyers looking for a reliable daily driver will find little to complain about here.

On the flip side, the SoC isn’t as powerful as say, the Snapdragon 765G or Snapdragon 768G mobile platforms that can be found on similarly-priced devices like the iQOO Z3 (review). To wit, while I didn’t find the CPU lacking, the SD695’s GPU can’t quite push demanding games to comparable graphics and FPS settings. Case in point, BGMI, which maxes out at HD and High graphics and frame rate presets. On the other hand, you can slide the graphics and the frame rate all the way up to HDR and Ultra on the iQOO Z3. Suffice it to say, while the Vivo T1 5G performs admirably, the handset isn’t the fastest Android phone under Rs 20K.

Software-wise, the smartphone boots a custom skin of FunTouch OS v12 on top of Android 12. The interface is riddled with bloatware, though most of the preloaded apps can be uninstalled. Other than that, the UI offers a slick appearance and features multitudes of customisation features, including a built-in theme store and a slew of homescreen and lock screen tweaks. That said, the smartphone doesn’t support third-party icon packs, which is a bummer. Other than that, the device comes with most, if not all of the staple Android features including Google’s Digital Wellbeing suite, a built-in screen recorder, a dedicated gaming mode and the ability to encrypt apps installed on the phone. On the battery front, the Vivo T1 5G ships with a 5,000mAh cell that saw me through the end of a heavy work day comfortably. Unfortunately, the phone ships with an 18W fast charger that takes a while to refuel the battery pack completely – 1 hour and 40 minutes, to be precise. That’s a tad disappointing, seeing how competing phones ship with faster charging 33W bricks. Rest assured, you win some and you lose some in the battery department.

The Vivo T1 5G starts at Rs 15,990 for the 4GB RAM variant and for the price, gets a couple of things right. The smartphone scores top marks in the design department and the handset is a capable performer too. Furthermore, I had no complaints about the phone’s battery backup either. That said, the T1 5G’s display isn’t without its faults and the smartphone’s audio setup is nothing to write home about either. Furthermore, while the phone can click good-looking photos during the day, at night, the quality of the shots takes a steep dip. 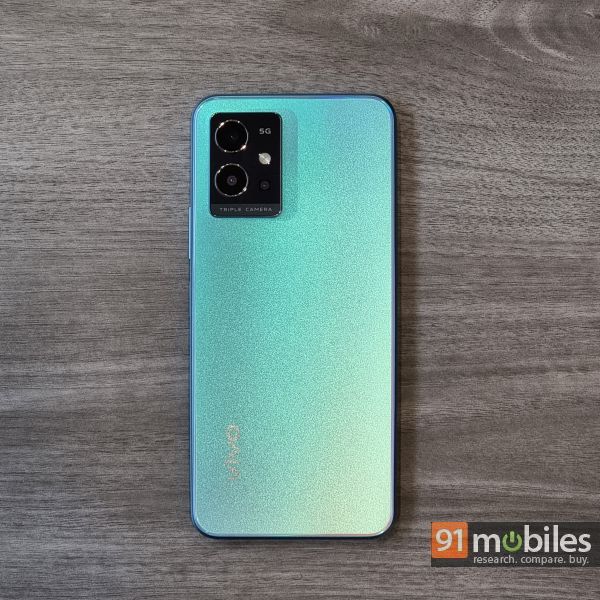 Correspondingly, while I commend Vivo for coming out with a new-age smartphone series, the T1 5G has a lot of room for improvement. Be that as it may, if you were on the lookout for a stylish phone with a fantastic selfie camera, you should definitely consider the T1 5G. For everyone else, the market has plenty of other well-rounded devices to offer.

Vivo T1 price in India will be under Rs 20,000; teaser video reveals design and features