“The Q6 is a bit of a mixed bag, but still quite noteworthy for what it brings”

After dual cameras, it’s now the turn of widescreen displays to go mainstream. LG started the trend with the flagship G6 (review), followed closely by the Samsung Galaxy S8 and S8+ (review). These are all premium phones of course, but the feature has already started trickling down to mid-range and even budget smartphones. Micromax’s Canvas Infinity (review) in fact, has brought widescreen displays to under Rs 10k. LG’s own affordable contender comes in the form of the Q6, a toned-down version of the LG G6… 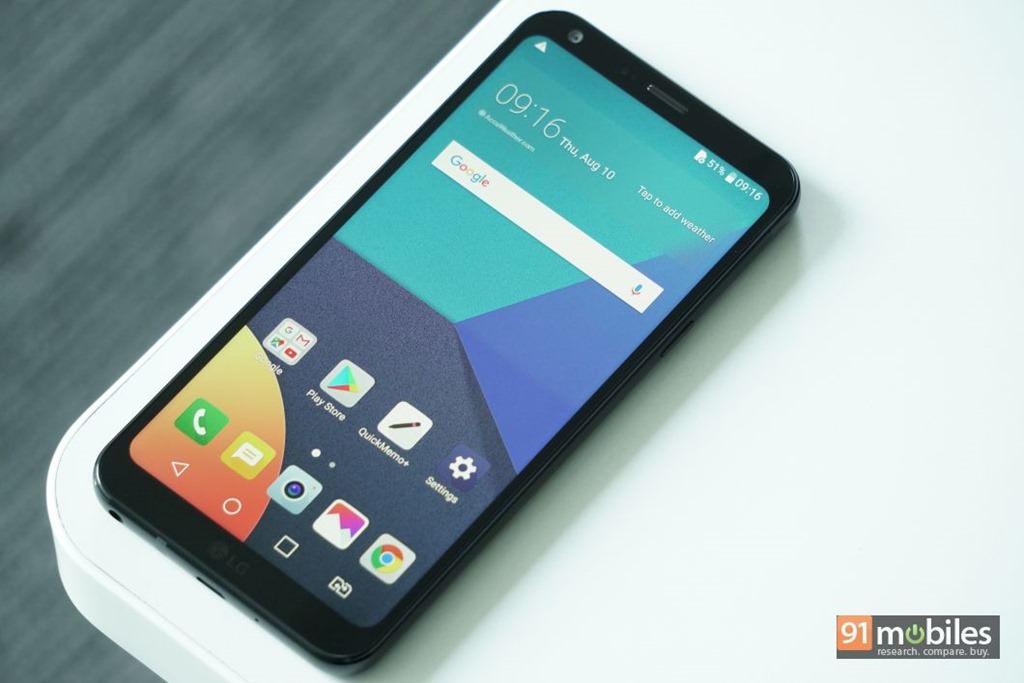 Put simply, the Q6 (first impressions) brings the G6’s bezel-less goodness to the masses, thanks to its affordable pricing. Let’s see how it fares as a daily driver.

The key highlight of the Q6 has to be its 18:9 display, and thanks to that, the device is able to pack in a 5.5-inch screen in the body of a 5-inch phone. That aside, the Q6 is a bit of a mixed bag. It shines in areas like battery life and camera image quality, but leaves something to be desired when it comes to performance and build quality. The lack of a fingerprint scanner is also a bummer.

The Q6 can easily be mistaken for a 5-inch smartphone, but in reality, it sports a 5.5-inch display. This sorcery is due to the 18:9 aspect ratio of the display and super-slim side bezels, which makes the overall size of the device quite compact. This also means it can be used easily with a single hand, which is something that can’t be said for most 5.5-inch smartphones. The LG Q6 looks quite stylish too, especially from the front. That said, the build quality is a bit of a mixed bag. While the aluminium frame should help, the plasticky back takes a little something away from the overall feel and collects fingerprints too. 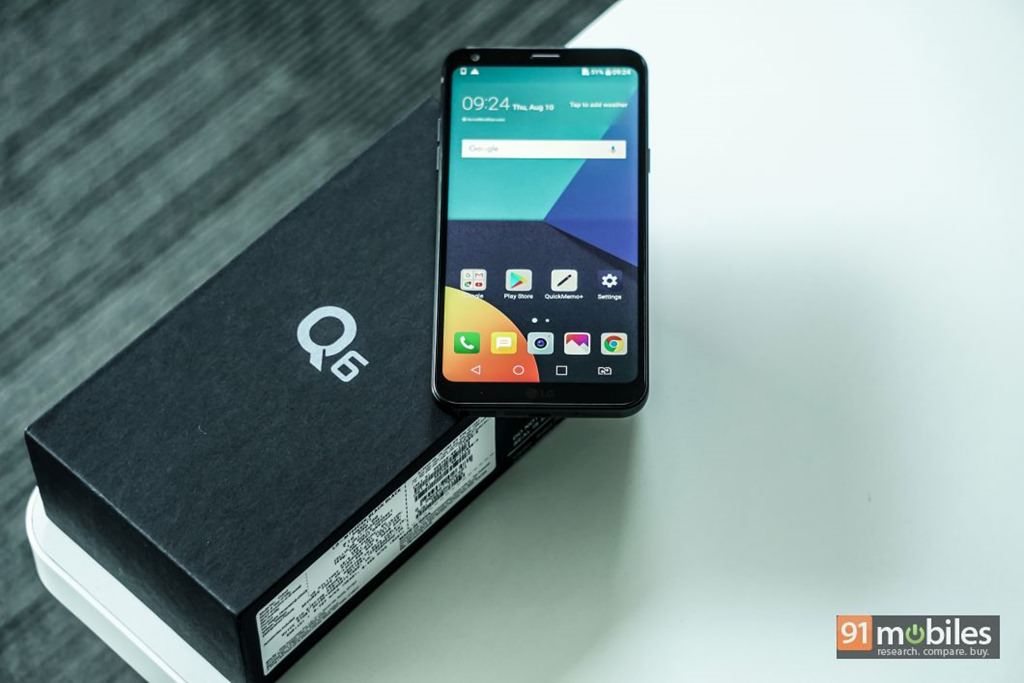 The screen offers a resolution of 2,160 x 1,080 pixels, which is slightly more than standard 1080p (because of the taller screen), and a very capable display it is too. The touch response is excellent, while the visuals are sharp and vivid. No issues with sunlight legibility or viewing angles either. 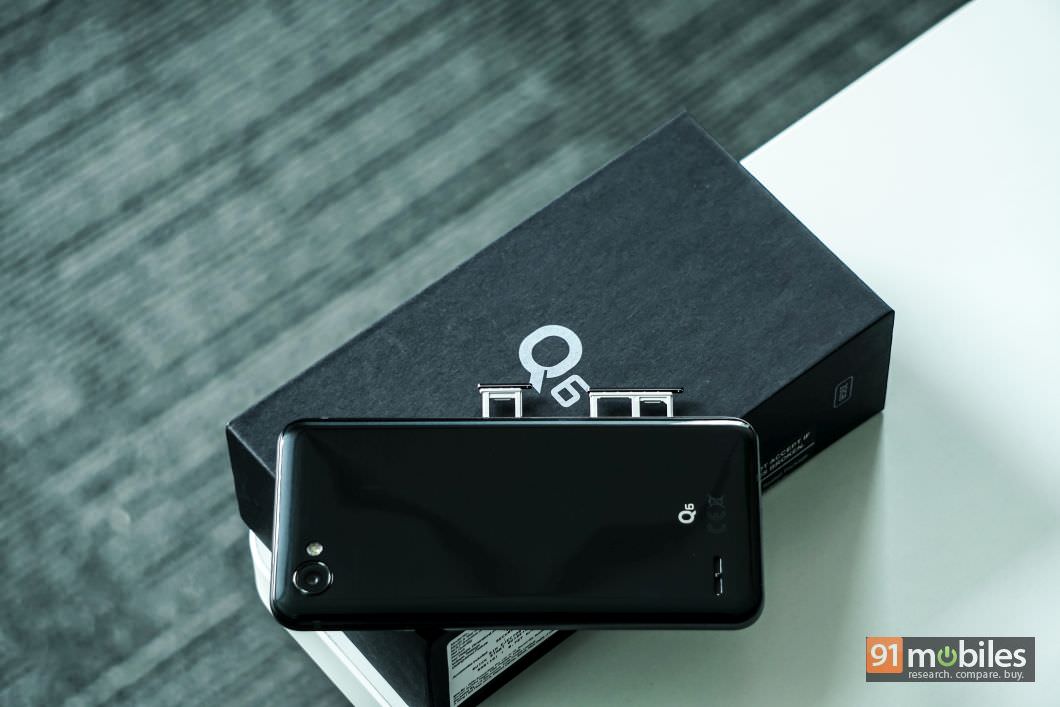 The front is almost all screen, save for the slim side bezels and a small chin below that sports the LG logo. Up top, you’ll find the earpiece, sensors and front camera. At the bottom, you’ll see a micro-USB port and a 3.5mm headset socket, while the top is barren and just has the secondary mic. The power key is on the right, while the left is where you’ll see the two discrete volume adjustment keys. The left spine is also home to two ejectable trays – the first one accepts a nano-SIM, while the second one can take another nano-SIM and also a microSD card. The fact that the LG Q6 has a dedicated storage expansion slot is definitely a plus, since most dual-SIM phones are going the hybrid way. 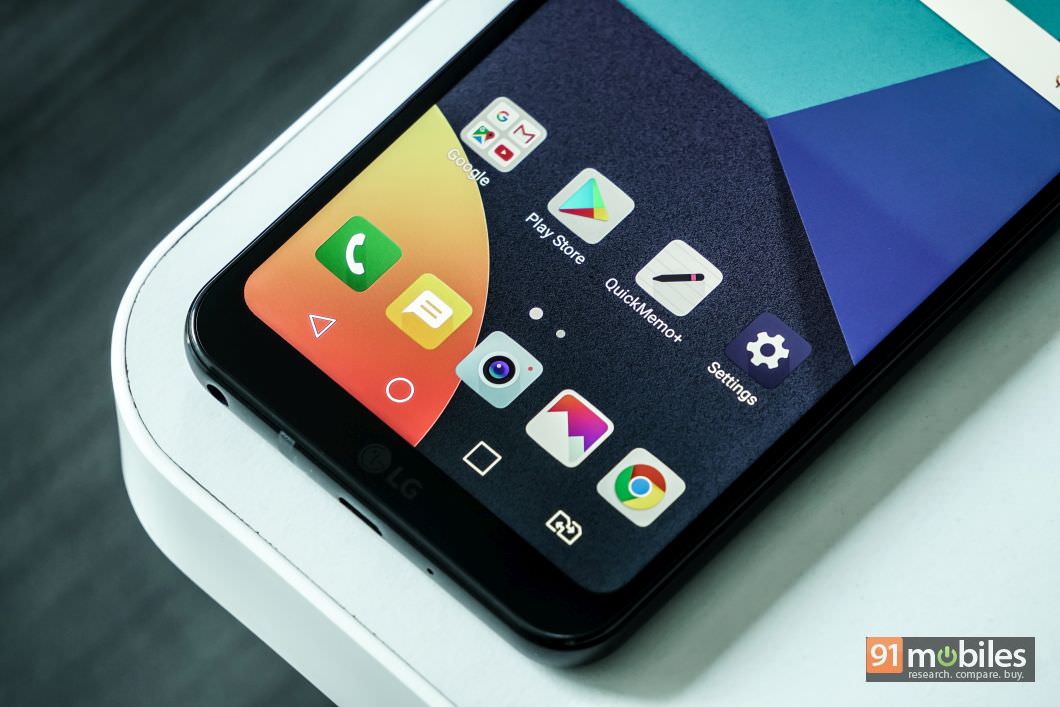 On the flip side, the fingerprint scanner is conspicuous by its absence. Fingerprint scanners are present even on budget phones these days, and it’s a bummer that the Q6 misses out on this ubiquitous feature. It tries to make up for that by offering a face unlock feature, but that is a bit of a hit and miss – it works well usually but fails in less than ideal lighting conditions. Another gripe we have with the design of the LG Q6 is the placement of the speaker at the rear – as it tends to muffle the sound when the phone is placed on a flat surface.

With a 13MP f/2.2 primary shooter and a 5MP wide-angle selfie camera up front, the photography chops of the LG Q6 are fairly conventional. The camera app however, is quite loaded with features. The UI is minimalistic, and there are just a few basic shooting modes like auto, panorama and food on offer. A bunch of colour filters are there as well. We hate the fact the HDR mode is buried deep within the camera settings. 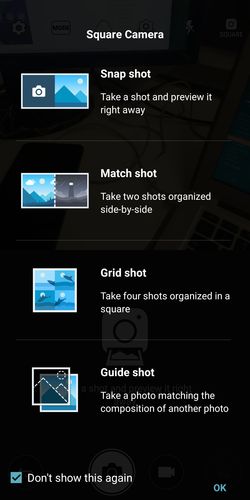 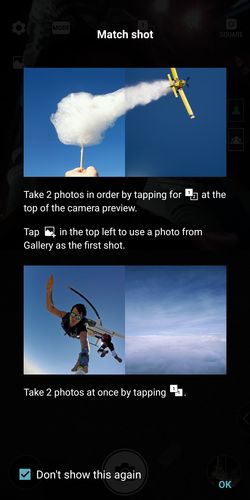 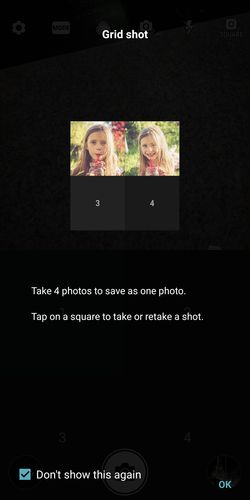 Interestingly, the camera app also offers a square mode, which basically takes advantage of the phone’s 18:9 aspect ratio to divide the viewfinder into two squares. In this mode, the available options include a Snap shot, Match shot, Grid shot and Guide shot. Snap shot lets you shoot a picture and preview it directly on the bottom half of the screen, while Match shot lets you take two shots organised side by side. Grid shot allows you to take four images laid out in a single square photo, while Guide shot allows you to use an image of your choice as a reference to compose the picture you’re shooting.

As can be seen from the sample shot embedded in the gallery below, the Q6 can take some nice shots. We found the daylight shots to be quite sharp and full of detail, while shots taken at night turned out to be better than expected. Suffice to say that most casual photographers should be pleased with the results it offers, selfie lovers included. There’s a screen flash feature for low-light self-portraits.

The Q6 runs Android Nougat 7.1.1, layered with LG’s feature-packed custom skin. You don’t get a dedicated app drawer by default, but there’s an option to download LG Home and get that back if you so desire. 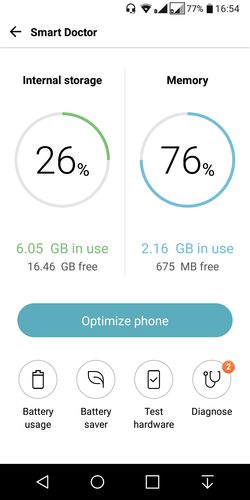 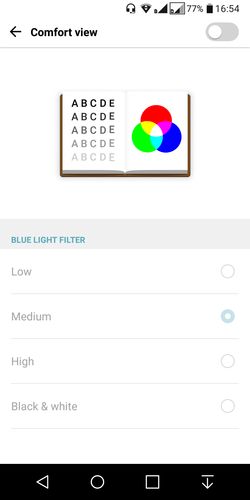 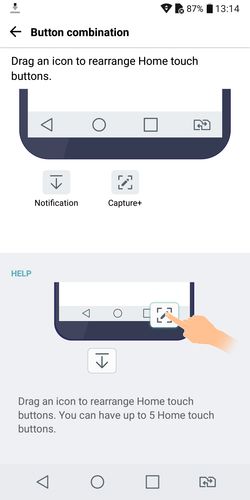 There are tons of other features including an option to change the sequence and combination of the software-based navigation keys (you can have up to five virtual keys, including one to display the notification panel), a blue light filter for the display, KnockON that lets you double tap the screen to turn it on or off, and an app scaling feature that lets you adjust screen size of downloaded apps on a per-app basis. Preloaded apps include QuickMemo+ and Smart Doctor that includes a battery saver and diagnostics. Those coming from stock Android might feel a tad overwhelmed by the abundance of options available, so do keep that in mind. Otherwise, LG’s custom skin shouldn’t require a big learning curve.

This is where things start to go downhill for the Q6. It packs a Snapdragon 435 with 3 gigs of RAM, a combination which is available at lower price points these days. Even if we ignore that for a bit, the usage experience offered by the Q6 leaves something to be desired, as lag creeps up occasionally, even while navigating the phone and using regular apps. It’s fine for casual gaming, but heavy games also show occasional frame drops. Clearly, the Q6 isn’t for power users and heavy games, but others should still be mostly fine with it provided they know what to expect.

On the positive side, the 3,000mAh battery lasts quite long. The phone lasted almost 12 hours in our video loop test, and in real life usage, we usually went home with at least 30-35 percent fuel left in the tank after long workdays, with moderate usage throughout. 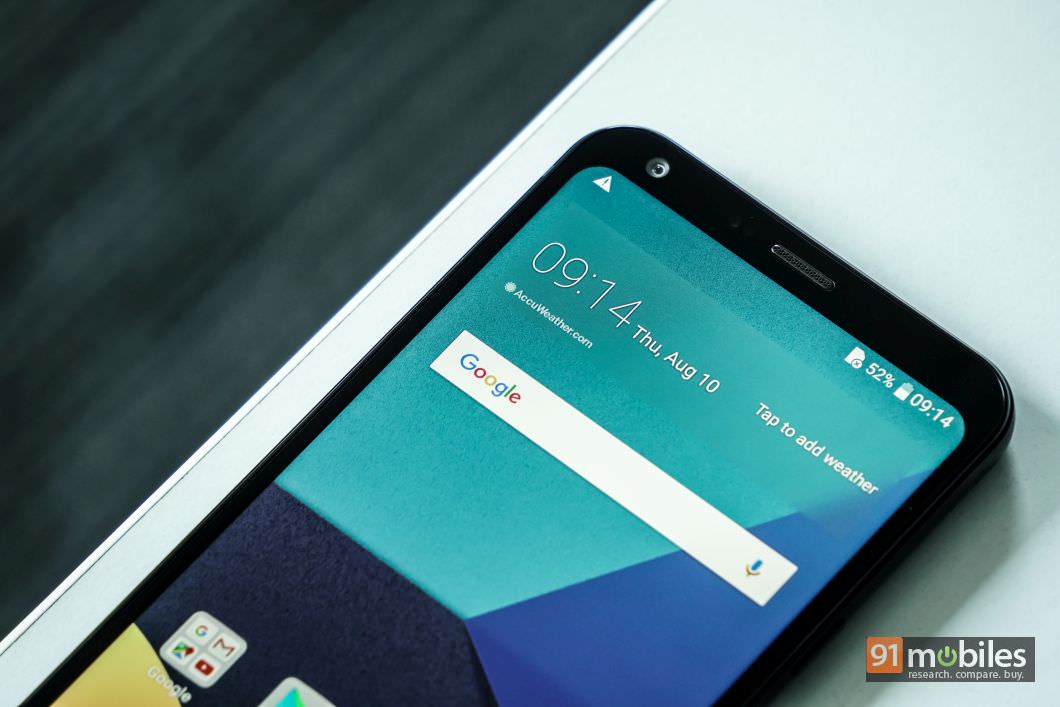 As is quite evident, the LG Q6 has its share of pluses and minuses. It looks good, offers a wide aspect screen at an affordable price, and shoots reasonably well too. The battery is the icing on the cake. However, the lack of a fingerprint scanner and the occasional lag that creeps up sours the deal. Further, the price bracket occupied by the Q6 is packed with tons of options, some of which are quite powerful and compelling. The Xiaomi Redmi Note 4 (review) is still a solid option of course, but newer contenders like the Lenovo K8 Note (review) and the Moto G5s Plus (first impressions) are better all-rounders in comparison as well. The K8 Note and G5s Plus even offer dual cameras. And with the launch of the Xiaomi Mi A1 (review), which is an Android One smartphone and rocks dual cameras as well, things look even tougher for the Q6. Despite its unique widescreen display then, the LG Q6 struggles to make a mark, especially given the competition it faces. That said, it’s still worth a look for those who aren’t power users, and are enticed by the prospect of a smartphone that offers a reasonably large screen size in a compact package.