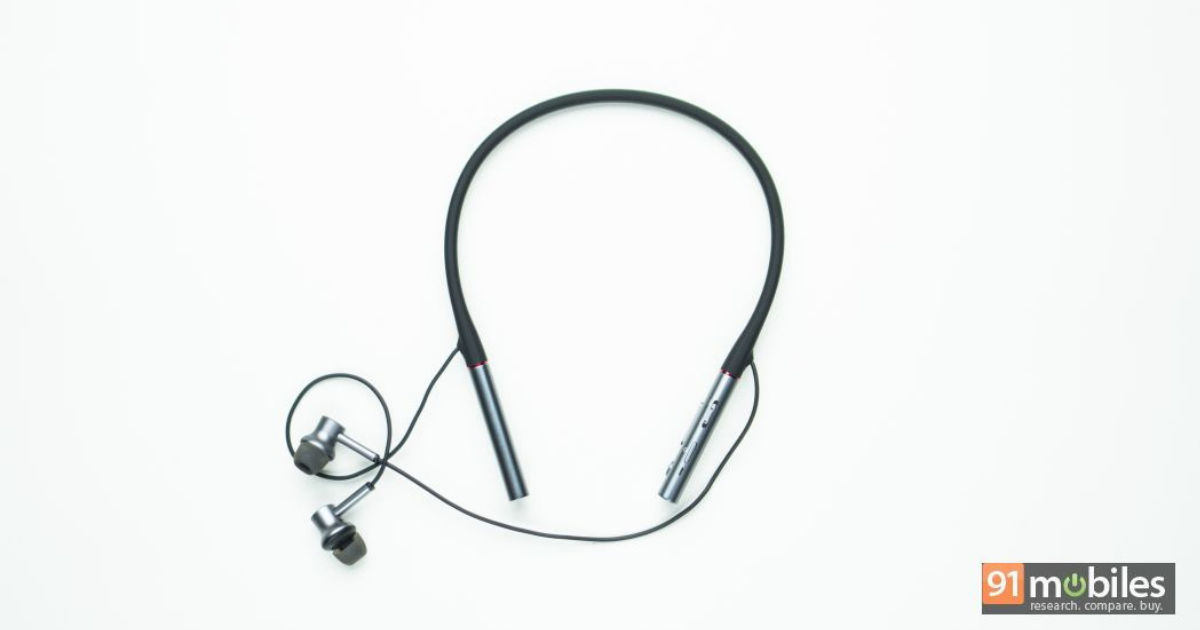 My daily commute to work and flight trips would instantly be better if I could block out the sound of crying toddlers, the ruckus caused by the engine and the chaotic chattering of fellow passengers. Thankfully, audio manufacturers have made a lot of strides in the noise cancellation segment and nowadays, you can get your hands on a pair of quality ANC headphones which only relay the things you want to hear, to your ears. 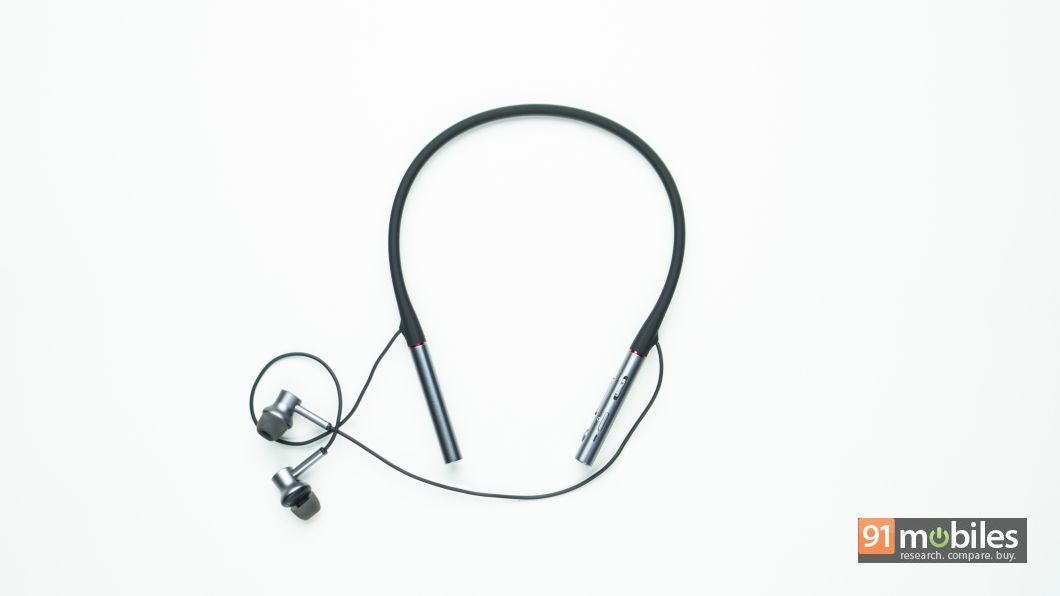 Now, while the segment is thriving, it’s not without its fair share of compromises. For one, you’ll have to splurge upwards of Rs 25K on a pair of good noise cancellation headphones. Moreover, if you have a liking towards in-ear type headphones, then your choices are all but limited to Bose’s QC30, which is bulky on both, the shoulders as well as your wallets.

That’s where 1MORE’s latest dual-driver BT ANC earphones comes into the picture. The neckband-style earbuds boast quality sound, support ANC and good battery life at a mouth-watering price. To test the company’s claims, I got myself a unit to review and here are my two cents on the same after a week of usage.

Dual Driver BT ANC draw parallels to the company’s Triple Driver BT my colleague had reviewed a while ago. In fact, barring the unit’s slightly thicker earpieces, the rest of design is exactly the same, with both the earphones utilising a rubberised neckband which is soft to the touch. The rubberised section terminates into two plastic bits on either end, one of which houses all the I/O whereas the other features the company’s logo. What’s more, while the earphones sport a two-tone finish, you’ll find hints of red on the earpieces as well as the neckband, which add a tinge of flair to the unit’s otherwise minimalistic design. 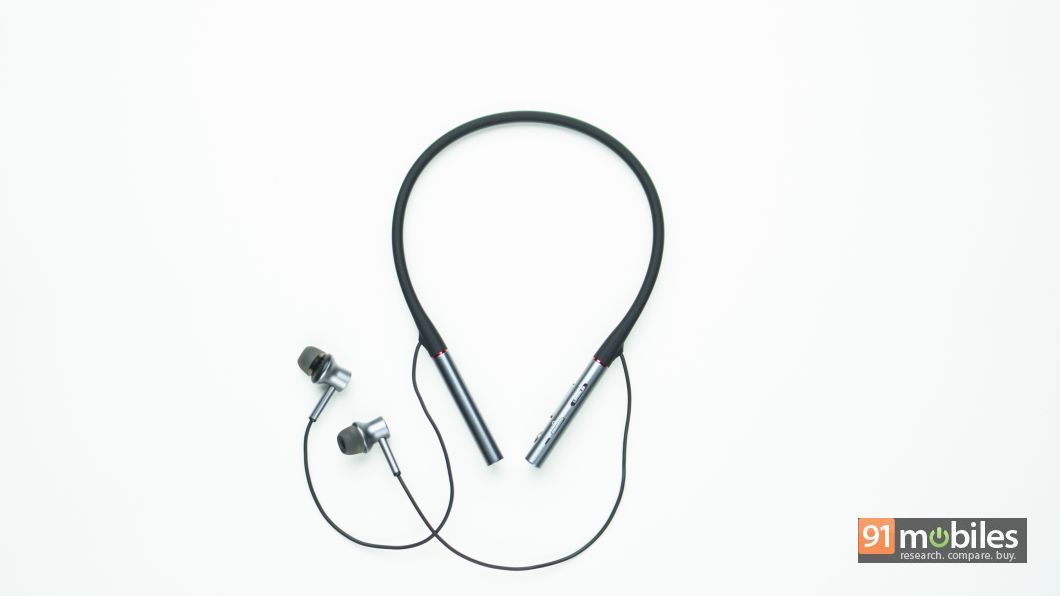 Coming to the buttons, the Dual Drivers BT ANC feature a volume rocker, a play/pause toggle (can also be used to change tracks), a power button and an ANC switch on the left-hand side of the neckband. What’s more, the company has cleverly hidden the USB Type-C port (yay!) towards the underbelly of the neckband which adds to the overall aesthetic appeal of the headset and keeps it clean from dust particulates too. 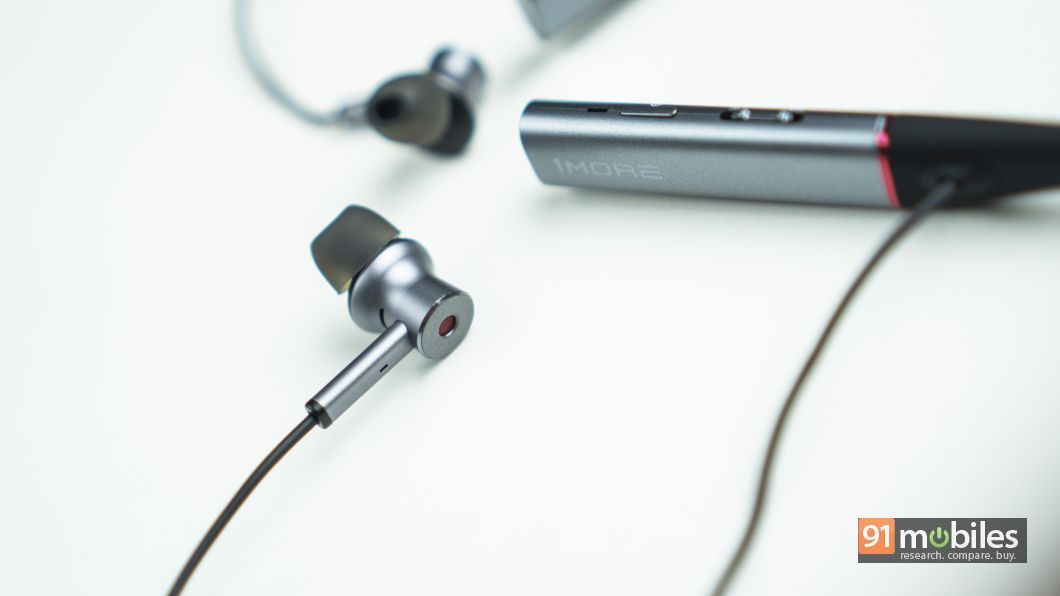 Now, despite shipping with a ton of controls, the I/O on the headset never felt cramped. Moreover, the buttons were satisfactorily tactile too, and after living with the earphones for a week, I could switch between songs and control the volume solely by relying on my muscle memory. And, as you can imagine, you’ll seldom need to use the phone whilst listening to media with the Dual Drivers BT ANC in your ears, which is fantastic.

The 1MORE Dual Driver BT ANC leaves no stone unturned in the comfort department either. In fact, thanks to the use of plastic, the pair is extremely lightweight, and you won’t feel it lug on your shoulders even after hours of wearing the headset. What’s more, the earphones ship with angular earpieces which form a comfortable seal in the ears. In fact, I managed to binge-watch two instalments of Fast and Furious without so much as readjusting the earpieces. 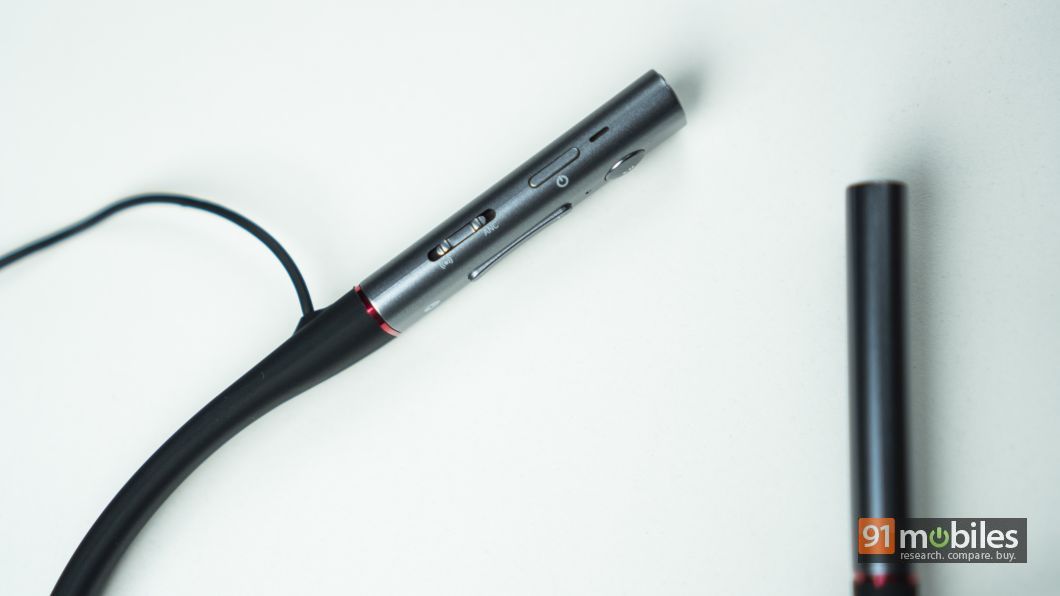 Before I talk about the sound quality of the earphones, I’d like to quickly mention some noteworthy features of the Dual Drivers BT ANC earphones –

1 – The neckband is extremely flexible and I had no issues squeezing the earphones inside the pocket of my jeans.

2 – The Dual Drivers BT ANC aren’t sweatproof, nor do the buds carry any IP rating. Consequently, you should be wary of using the earphones in a gym.

3 – The USB Type-C port at the bottom of the neckband can be used to connect the earphones in wired mode. 1MORE even provides a USB Type-C to 3.5mm cable with the retail unit of the headset, which is neat. Now, the setup can get a bit cumbersome to use, but, it’s a godsend for when the earphones run out of juice and you want to listen to music.

Coming to the meat of the matter, the 1MORE Dual Driver BT ANC is driven by a pair of dynamic and a balanced armature driver, which have been positioned inside each earpiece. The headset boasts an impedance of 32 ohms in wired mode and comes with support for SBC and AAC codecs only. That’s quite a shame, as it’ll restrict users from listening to high-bitrate music on the earphones over Bluetooth. 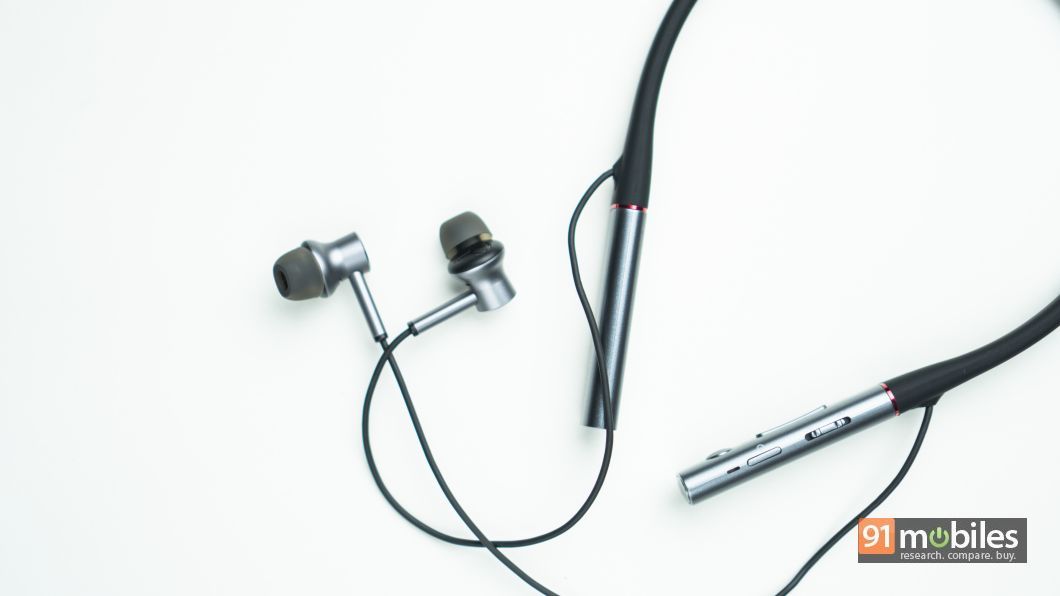 Now, 1MORE has been in the business long enough to know what sticks and with its latest headset, the company is offering a crowd-pleasing sound signature which favours the low-end ever so slightly. That doesn’t mean that the bass is invasive but rather, is prominent enough for you to enjoy all of your favourite EDM and Hip-hop songs. Listening to Tones and I’s Dance Monkey, the beats really come out on their own during the song’s chorus and I couldn’t help but let loose a few moves. Not the prettiest sight, mind you, but the bass output was so enjoyable that it put me in a care-free mood.

Another fine example of the earphone’s stellar bass output is exhibited in Ritviz’s Sage. The track is flush with poppy beats which come out beautifully on the 1MORE Dual Drivers BT ANC – there’s minimal decay, good impact, and a pleasant rumble during the non-vocal parts of the track. 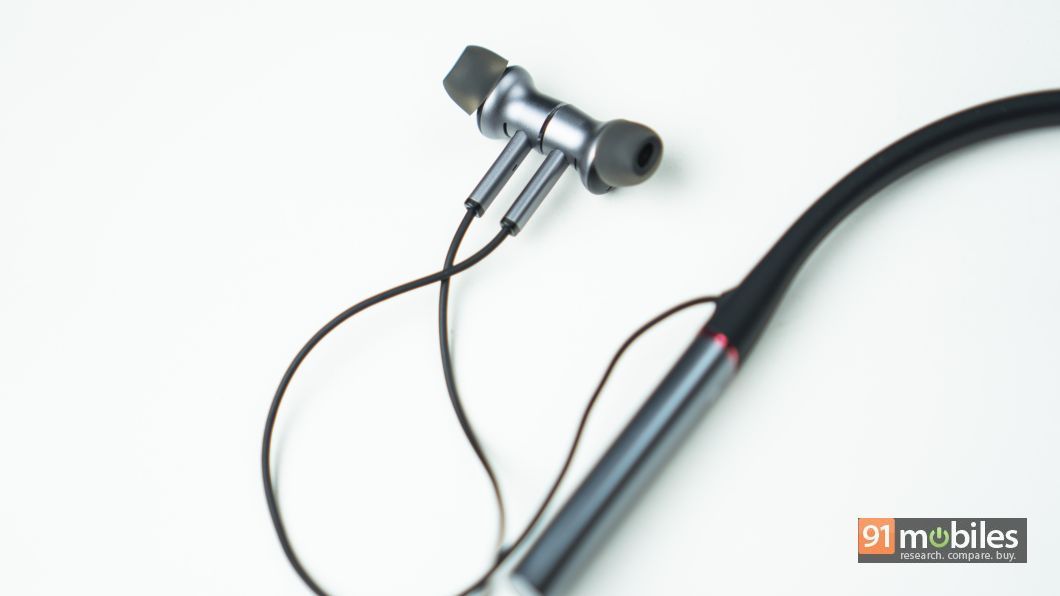 With that said, I feel that the earphones could do with a bit more depth in the sub-bass frequencies. Now, sub-bass frequencies are so low that more often than not, you’ll feel their presence, rather than hear them in a track. A fine example of the same is Murmurs by Barefoot, which when relayed through the right pair of earphones, will send chills down your spine. While the track was still enjoyable on the 1MORE Dual Drivers BT ANC, it did leave me wanting for more oomph in the low end. 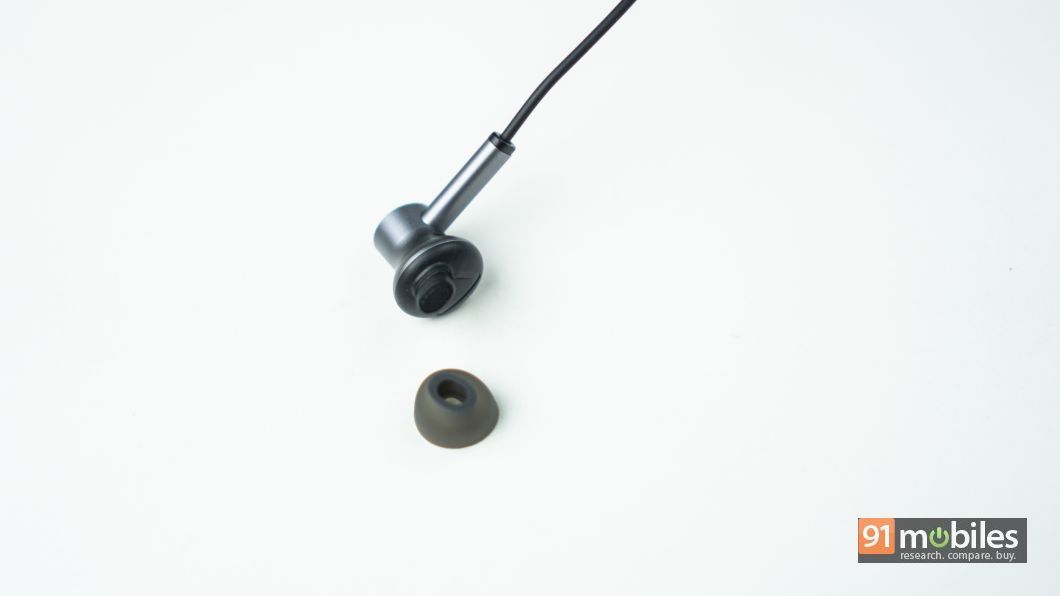 In a similar fashion, while the mid-range on the 1MORE Dual Drivers BT ANC is exquisite, it did come across a bit fatiguing to my ears from time to time. Case in point, Tom Walker’s Leave a light on, which sounds excellent until the singer rips a couple of high-pitched notes. As for the highs, well, the earphones struggled with delivering clean audio when I was listening to rock ballads on the unit. Strums from an electric guitar sounded lethargic, and despite shipping with a dedicated BA driver, the Dual Drivers didn’t sound very sparkly, to begin with. What’s more, I wasn’t quite impressed with the earphone’s imaging either and chaotic rock tracks often sounded muddy at higher volume levels.

If you paid close attention to the shots, then you might’ve noticed an opening towards the back of the earpieces. Well, that’s where the microphone sits, and it’s what helps the Dual Drivers BT get the ‘ANC’ label. Now, since the microphone is placed outside the earpieces, the unit operates in feedforward mode wherein, the mic hears the noise first, tunes it out by generating anti-noise and then relays it to the user’s ears. 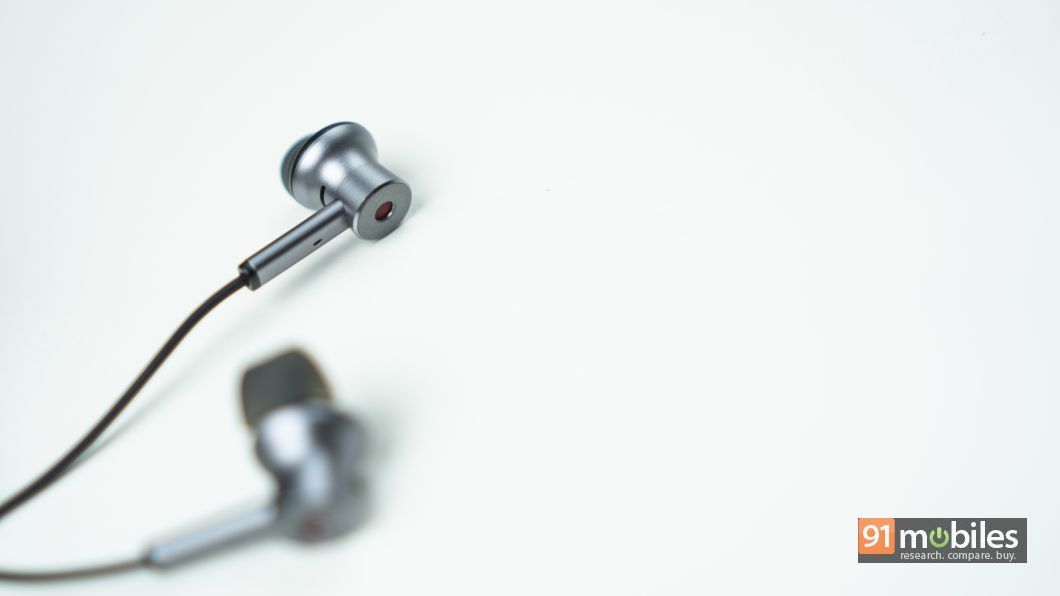 So, does the ANC do a good job of canceling out the noise in the Dual Drivers? Well, yes and no. You see, while the earphones do a fine job of drowning sounds from a car engine, you’ll still be able to clearly hear more erratic frequencies such as the chitter-chatter of your fellow colleagues. Quite frankly, I kept my expectations in check before I started reviewing the Dual Drivers BT ANC and therefore, I am not disappointed in the slightest with the earphone’s ANC performance. Consequently, for its price and overall size, I am amazed by how well the Dual Drivers BT ANC reduce, if not cancel out environmental noise. 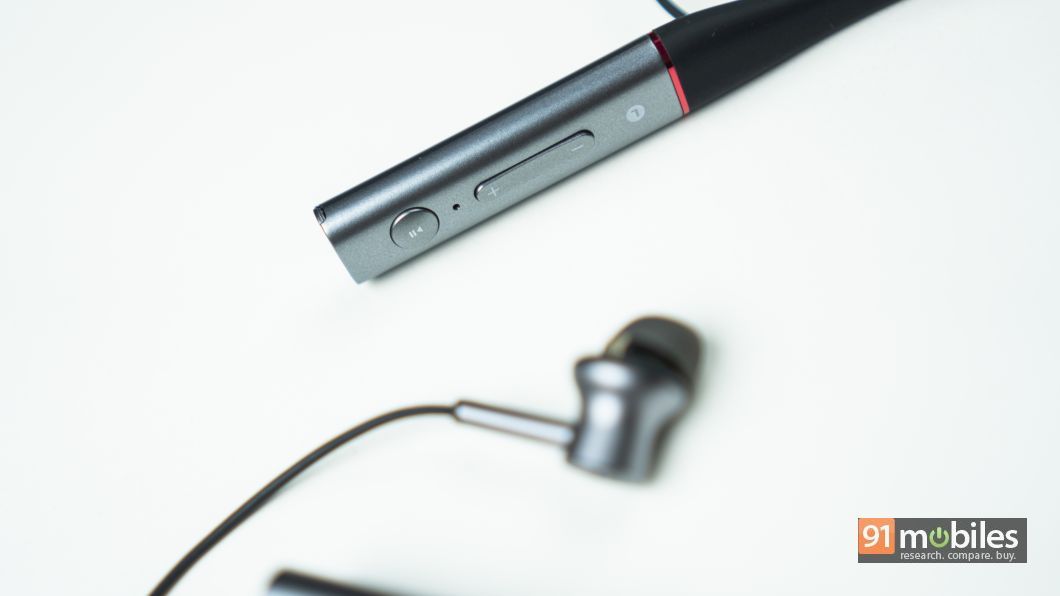 Lastly, the earphones are touted to play music for seven hours straight on a single charge, which aligns with my test figures too. I did drain the pair in under five hours on one occasion, but to the company’s credit, I was listening to music at max volume and even had the ANC turned on. What’s more, the earphones charge quickly too, and I was able to get the pair fully charged and ready to go in a little under an hour.

The 1MORE Dual Driver BT ANC carries a sticker price of Rs 14,999, but you can currently get the headset for just shy of Rs 10K. At that price, the Dual Drivers BT ANC is a steal as it offers a comfortable design, a musical sound signature and dependable noise cancellation too. Correspondingly, those looking for noise-cancelling earbuds of the neckband variety will undoubtedly find 1MORE’s latest offering to their liking.