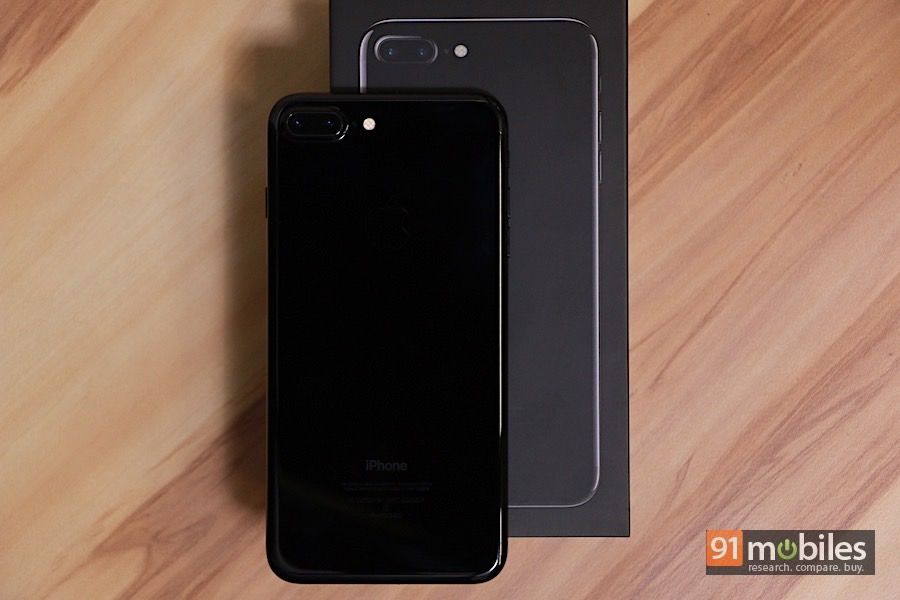 “The iPhone 7 Plus pièce de résistance is its dual camera but how good is it really?”

In 2014, after looking at the market realities, Apple finally succumbed and introduced a larger iPhone – the iPhone 6 Plus – to cater to a larger demographic of smartphone users who loved using phablets.  Obviously, the late CEO Steve Jobs would have scoffed at this idea from the start. However, apart from the bigger screen and better battery life, the iPhone 6 Plus distinguished itself from the iPhone 6 (review) by offering optical image stabilisation in its camera. The same continued with last year’s iPhone 6s and iPhone 6s Plus (review). However, this distinction wasn’t enough to warrant a sale.

This year though, Apple has pulled out all the stops: the iPhone 7 Plus (first impressions) comes with a dual camera and some fun new features. We captured a few images in different lighting conditions to test the new camera. Let’s find out how it fares. 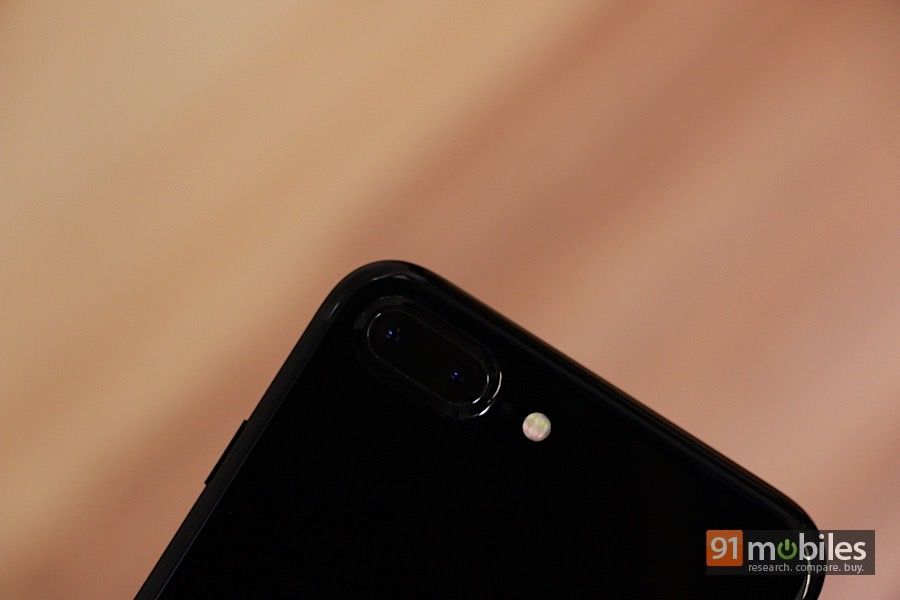 Before we analyse the quality of images, let’s take a look at the specifications. The iPhone 7 Plus comes with two 12MP cameras. The primary 12MP shooter uses a six-element lens and a Sony sensor with a 56mm lens and an f/1.8 aperture. The secondary camera is another 12MP shooter that has a 28mm lens and a slower f/2.8 aperture. What this essentially means is that using the 28mm lens on the second camera, the phone can simulate optical zoom, i.e. you can zoom 2x into the subject. In fact, Apple calls the primary 12MP camera a wide-angle one and the secondary one telephoto – which is definitely a bit of a stretch but we’ll take it. Note that the optical image stabilisation is limited to the main 12MP lens with f/1.8 aperture.

The front camera’s resolution has also been bumped up from 5MP to 7MP. Furthermore, the camera can shoot 4K videos at 30fps. One of the other noteworthy additions is the Quad-LED True Tone flash. 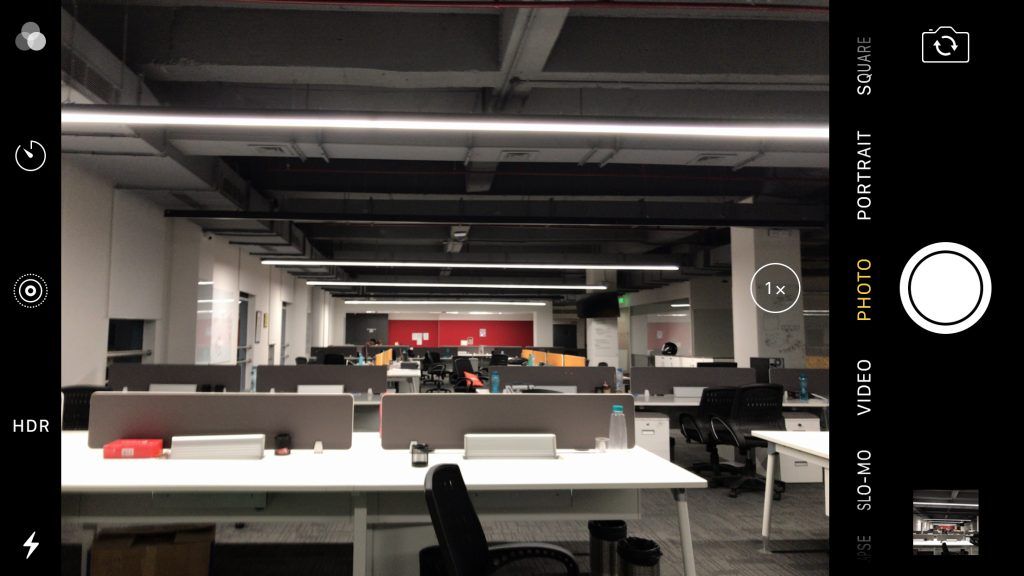 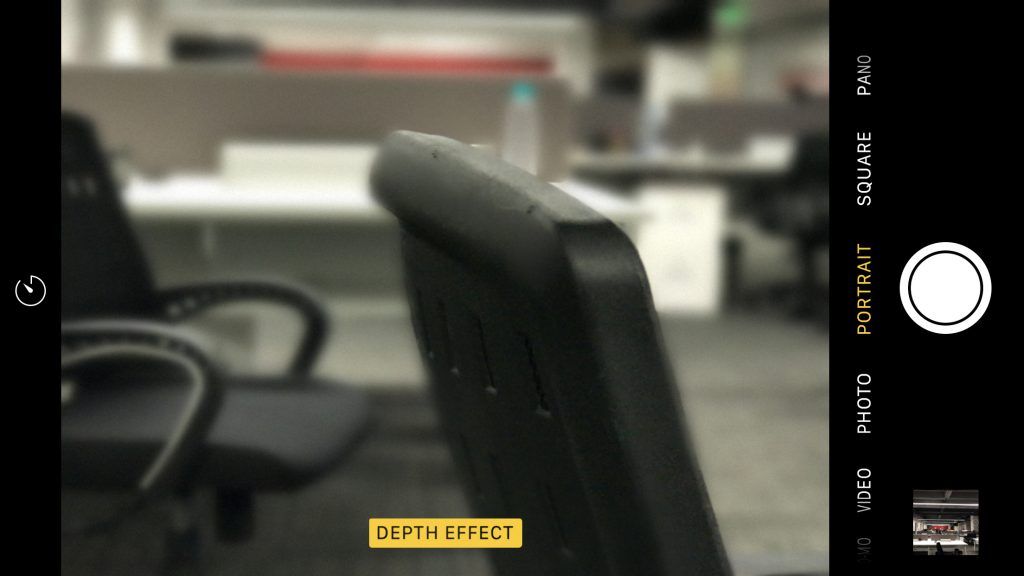 The camera app itself is still pretty much the same from before with an emphasis on easy shooting than manual controls (you can download a third-party app like ProCam 4 if you want a professional mode). However, a new Portrait mode – which can create a nice Depth-of-Field or Bokeh effect using software algorithms – is expected to reach the iPhone 7 Plus by December via a software update. But don’t worry, we had a look at the beta version of the Portrait mode in iOS 10.1.

The most important new addition to the iPhone 7 Plus is its new telephoto camera. Essentially, at 28mm you get a lot less frame but the second camera can conjure up more depth in the background than the primary one; by default, you get a better background blur. For example, take a look at the picture below of the red flowers with the stones in the background. The background defocus is a little more prominent in the zoomed in shot. The 2x optical zoom is definitely the pièce de résistance on the iPhone 7 Plus. You also get 10x digital zoom that manages to throw up more impressive results than other phones with digital zoom, which is an added advantage. 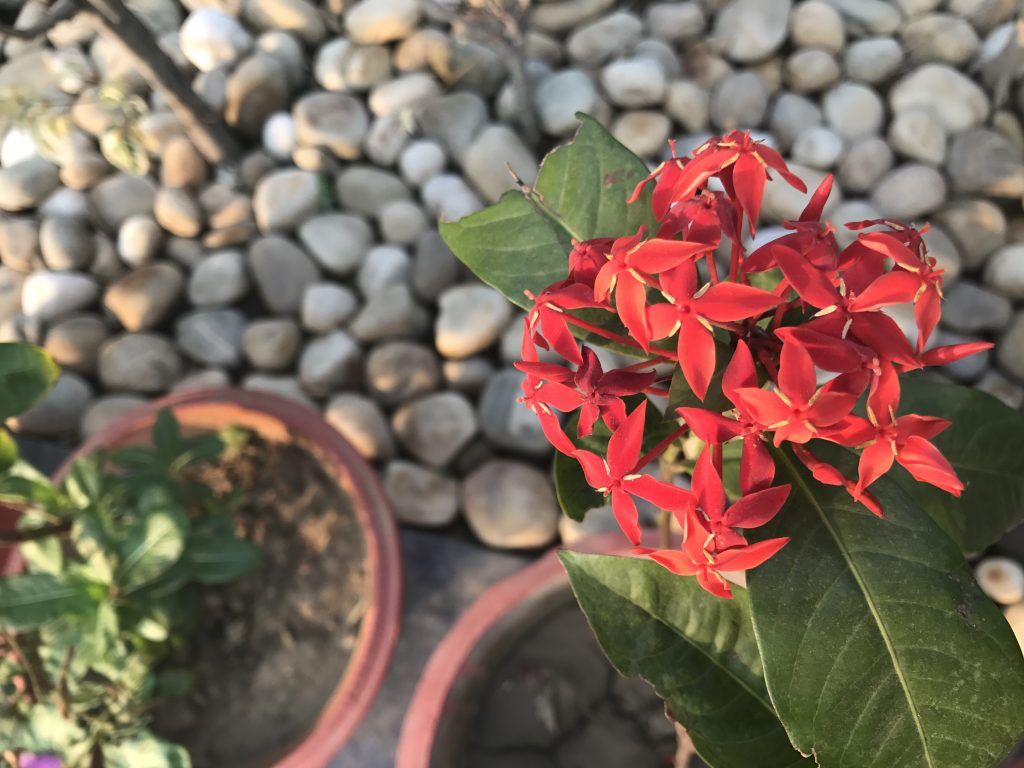 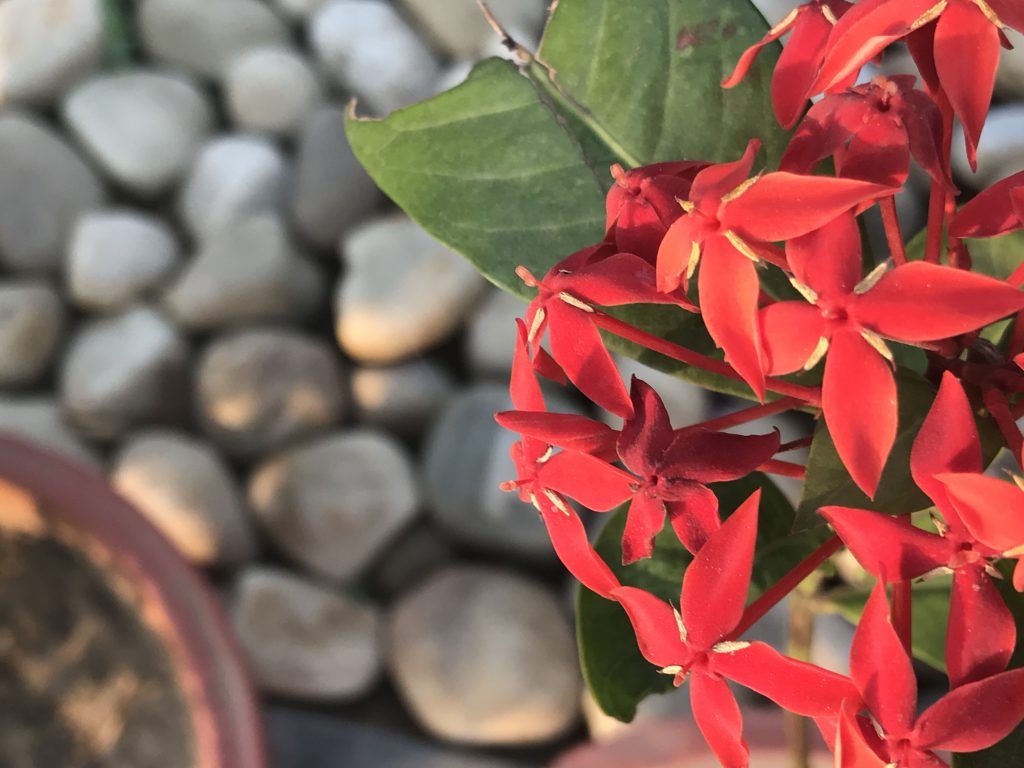 Even before we start talking about the Portrait mode allow us to reiterate that this is the beta version and the final version could be entirely overhauled for all we know. Having said that, even in this state, the Portrait mode is super impressive. We shot this colleague inside our office and if you look closely you will notice that hair strands of our subject are missing, which indicates that the software does an aggressive job of clipping unwanted information. Moreover, the noise levels are much higher than shots taken using the regular mode. 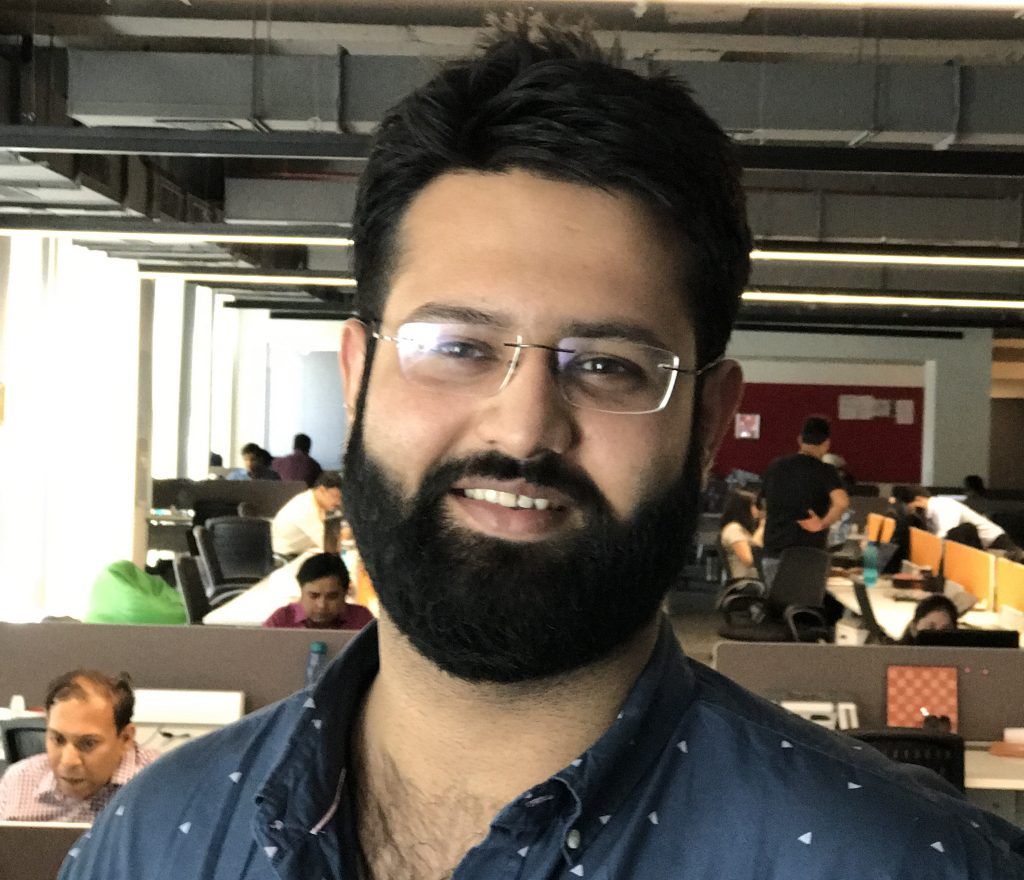 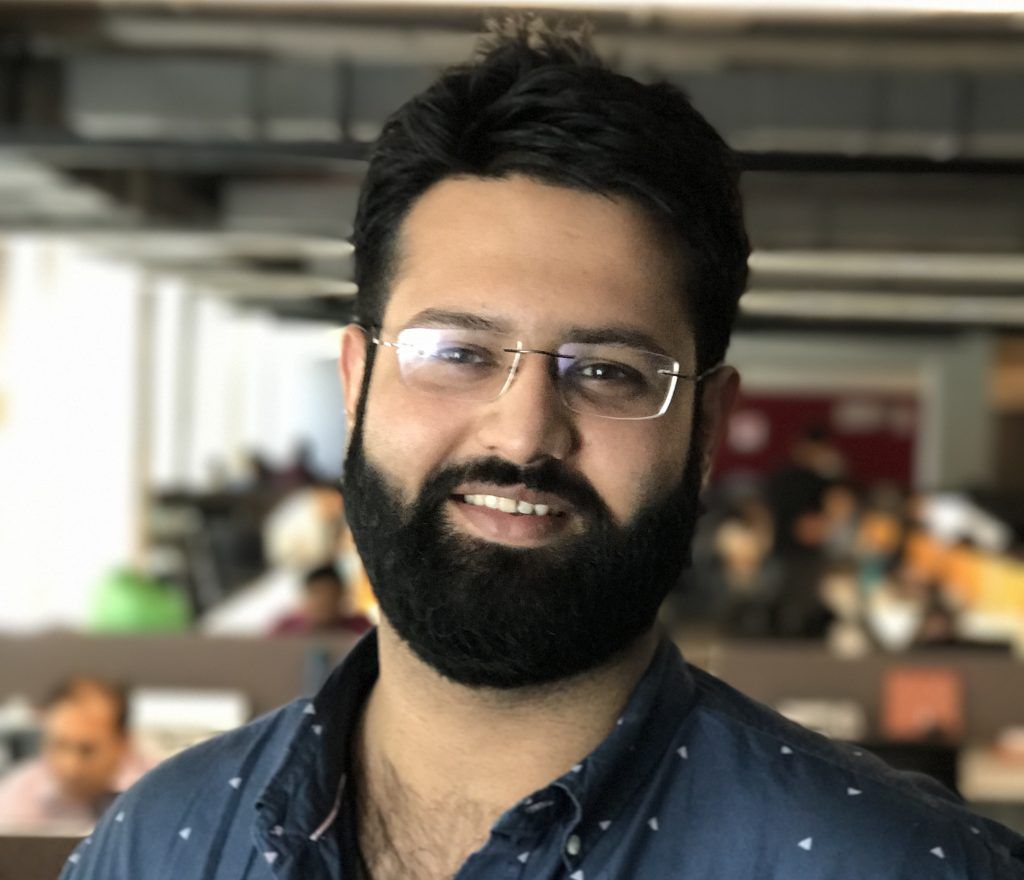 Moving on to our standard tests, in this long shot of the area around our office with thick foliage in the foreground and some buildings in the background. If you look at the sample image closely, you will notice that the definition in the leaves is more evident at the left edge and as you move your vision across the image, the leave start merging into each other. The iPhone 7 Plus’ camera does handle the shadows really well and manages to keep the colour in check. The colour of the blue sky is also very even with no evidence of blowing up the highlights. In fact, the overall colour is pretty accurate too. The muted saturation levels might feel slightly dull for some but we prefer it this way. What’s impressive is that the barrel distortion is also in check and, at least for the areas that are in focus, the iPhone doesn’t lose any definition at the edges. 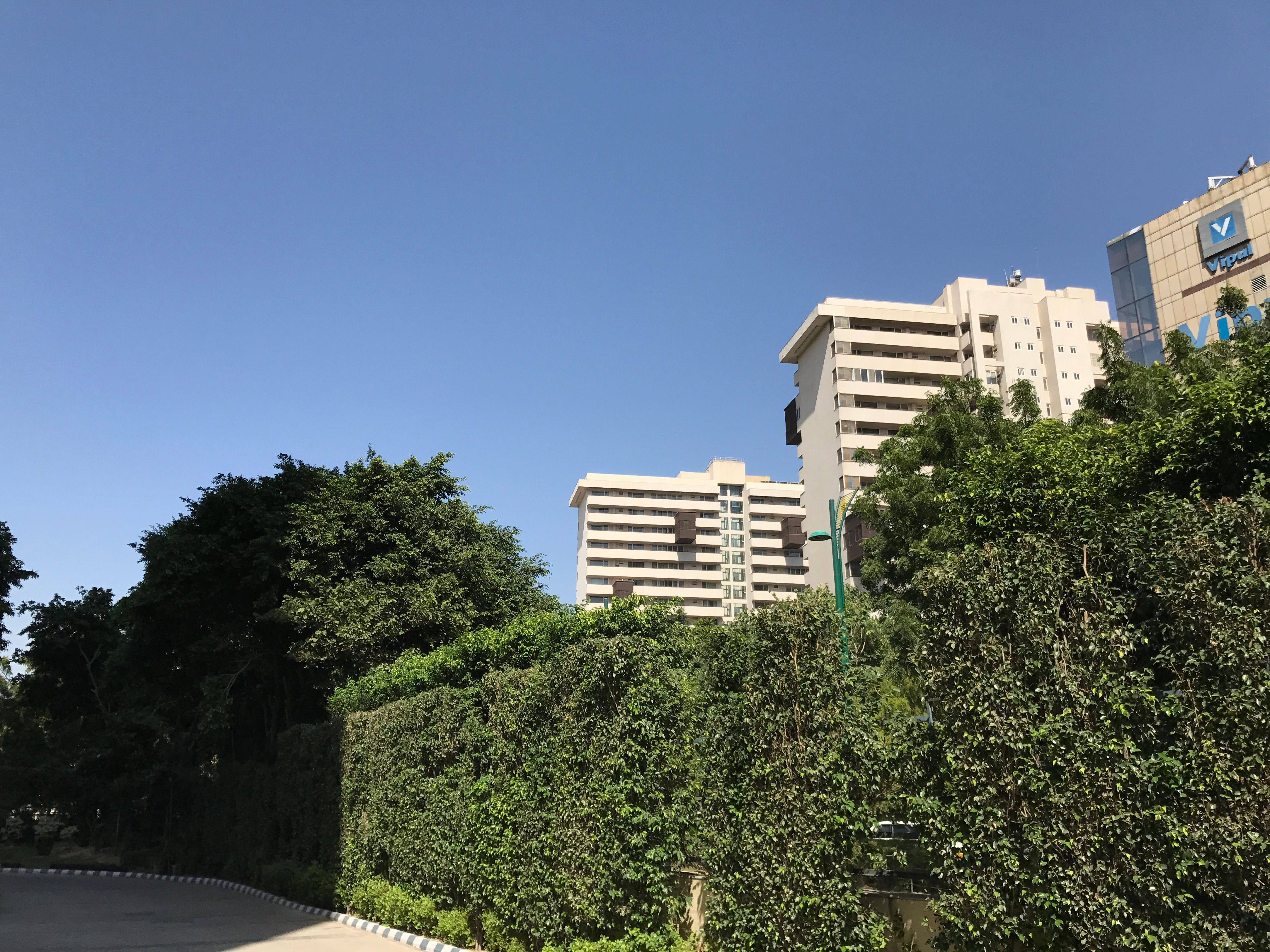 We shot a yellow flower and here we’ve inspect the entire frame. We noticed that the background has a pinkish hue that looks quite distracting. Furthermore, there is a bit of lens distortion at the edges as well. The colours, however, are once again close to natural and look pleasing to the eye as well. 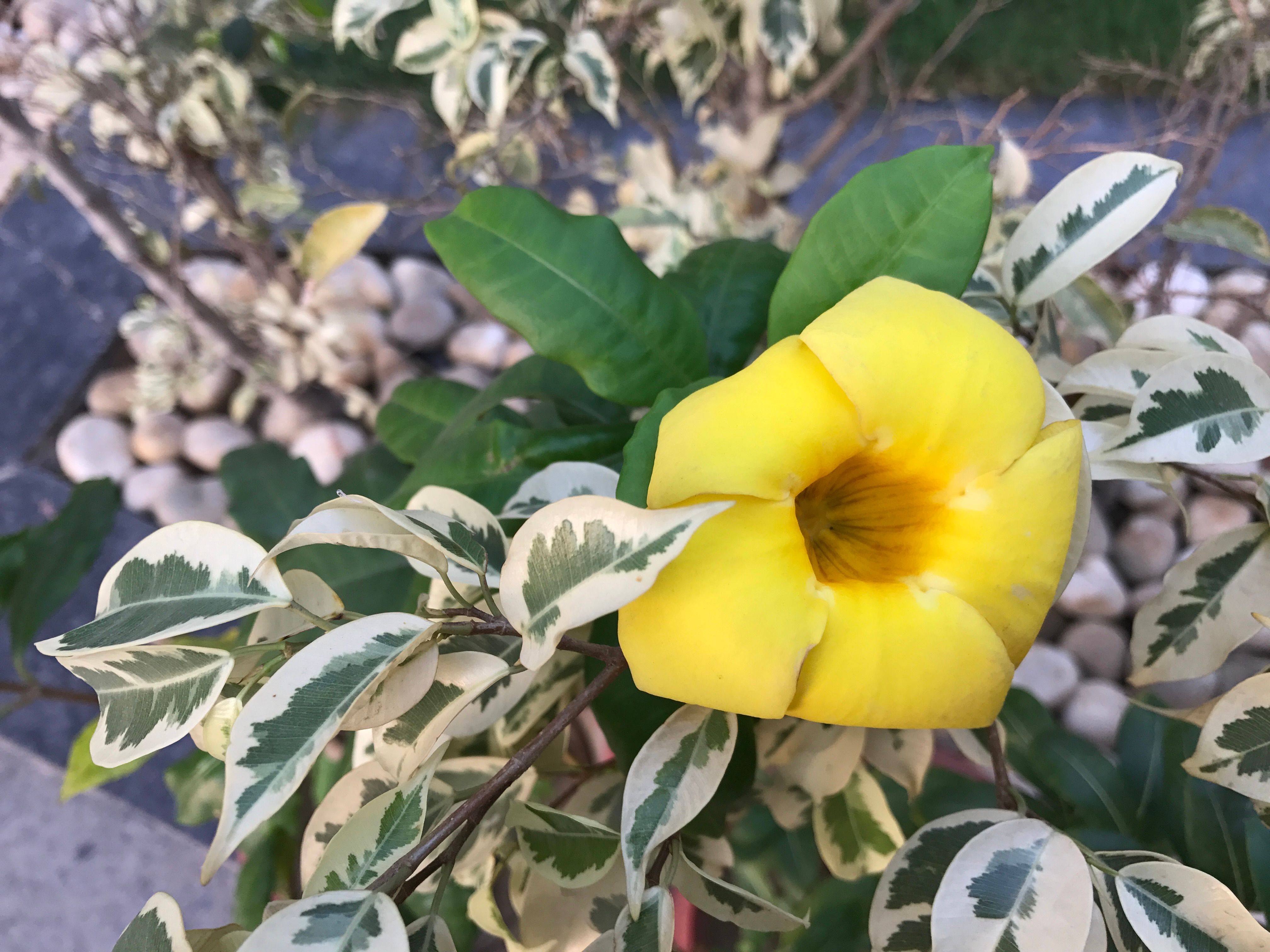 In a closer crop of the image, we can clearly notice the iPhone 7’s 12MP camera has managed to capture even the minute details like the slightly cut corners of the green leaf. The details look very impressive when you look at it standalone but we happened to compare it with a similar shot taken by the Samsung Galaxy S7 edge (review) – arguably the best camera on an Android phone – and noticed that the details were a bit more pronounced. We attribute it to the presence of a bigger 1/2.5-inch sensor compared to the 1/3-inch one on the iPhone 7 Plus. 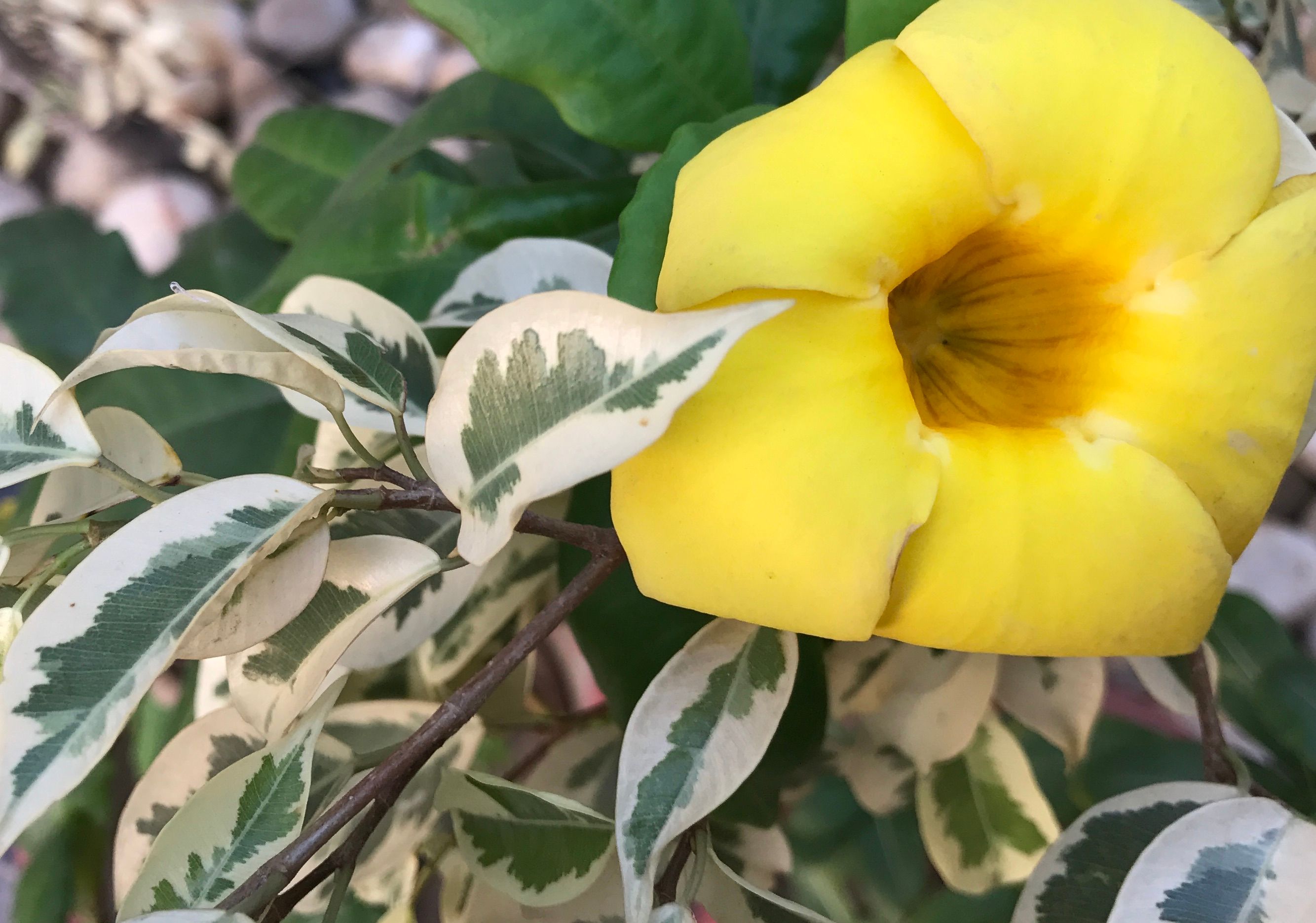 To test the High Dynamic range (HDR) mode in the iPhone 7 Plus, we decided to shoot our office building against the light of the setting sun. The phone also saves a copy of the regular shot and you can clearly see that the halo of the yellow sun bleeds into the evening sky. Moreover, a lot of details are lost in the blown out highlights. 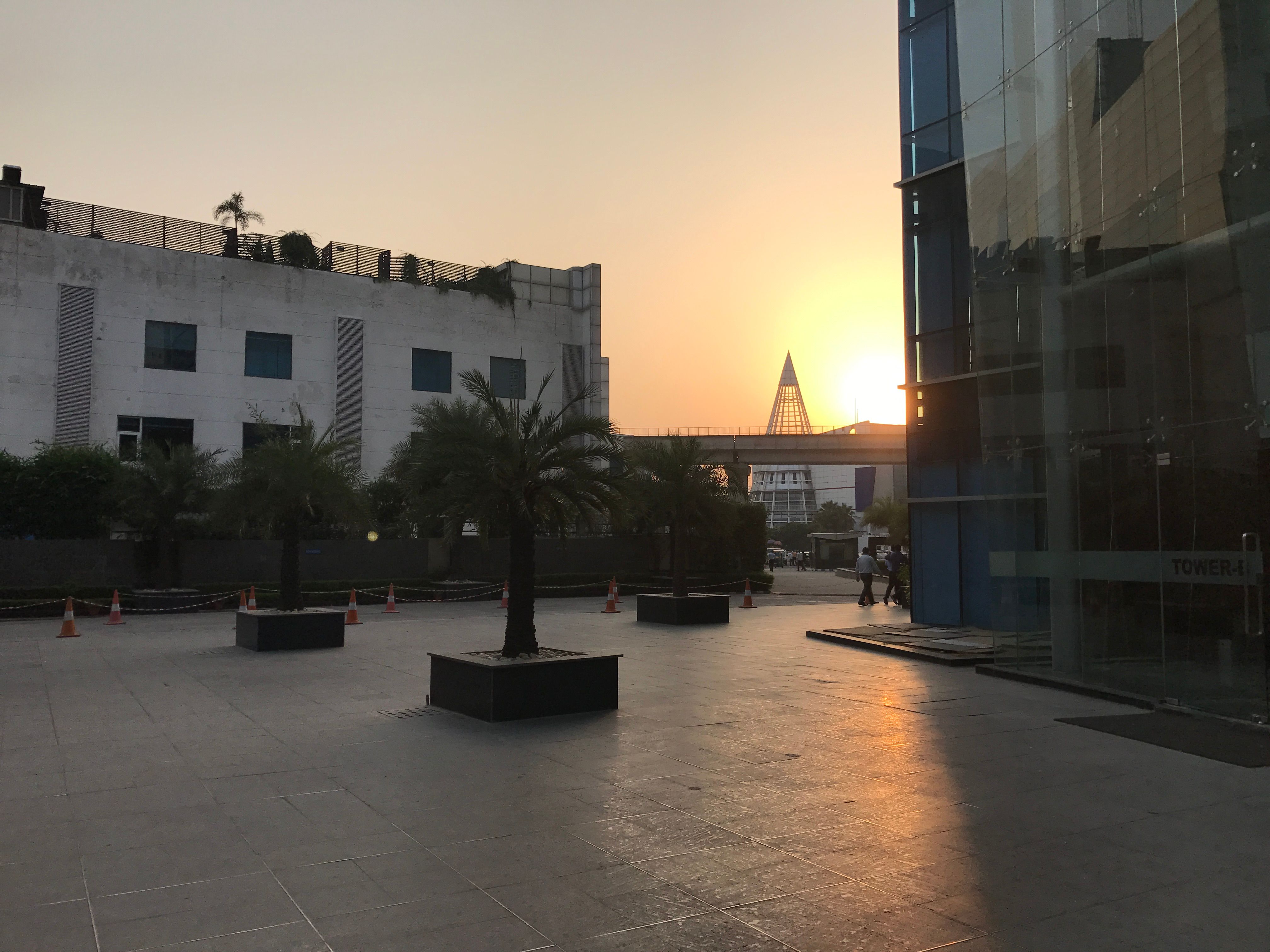 With HDR on, the camera takes three photos in three different exposures to use the image information and create one composite image. This composite image has infinitely better contrast and controls the bloom from the sun much better. Also, you will notice that the software algorithm has done a pretty good job of recovering details from the shadows in the trees. Also, thanks to the powerful A10 Fusion chip HDR processing happens almost instantly making us use the mode more often than we have in other phones. 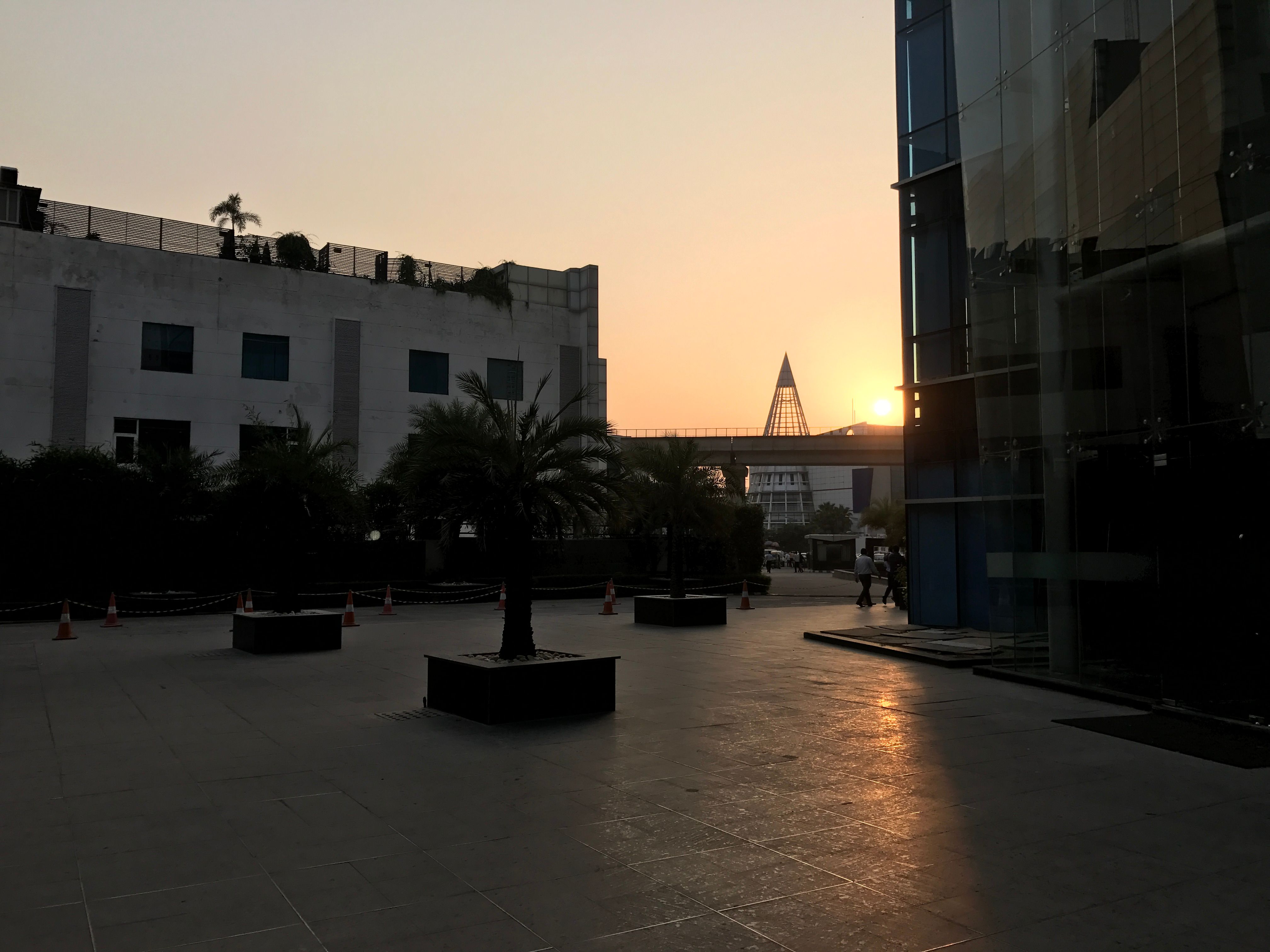 Once again we decided to use our swanky new office campus as the subject. Here the building stands tall against the night sky and only a few rooms are lit, which gives us a nice contrast setting to check if the iPhone 7 Plus camera can actually hold up. And we are glad to inform that the iPhone 7 Plus’ low light performance has improved by quite a margin compared to its predecessor. The camera software uses ISO125 and a 1/4 shutter stop. We think that is a smart combination of settings to ensure that the camera captures the best post possible shot in the given light condition. There is definitely a good amount of noise but there is very little compromise on the details. This is a really good image, and if you have a bit of patience and steady hands you can definitely achieve some decent shots in low light conditions with the iPhone 7 Plus. 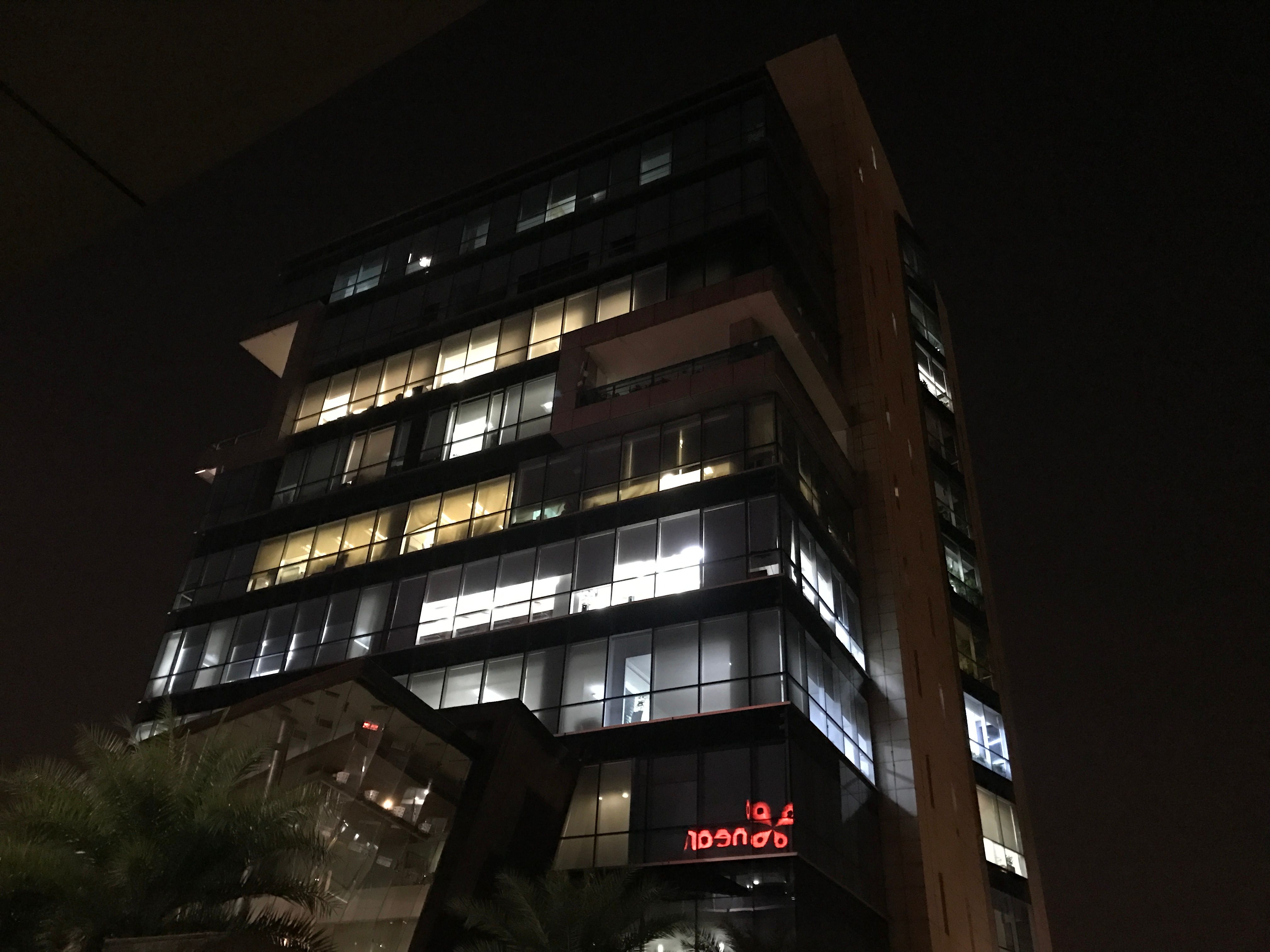 The resolution of the front camera has been amped up to 7MP from 5MP. This jump in resolution evidently results in a better shot overall but unfortunately the iPhone 7 Plus tends to concentrate on the subject more than the background as a result of which a lot of details are lost in the process.  Having said that, lovers of self portraits are still bound to be more than satisfied by the performance of the front camera. In any case, most of these images are going to end up on social networking websites. 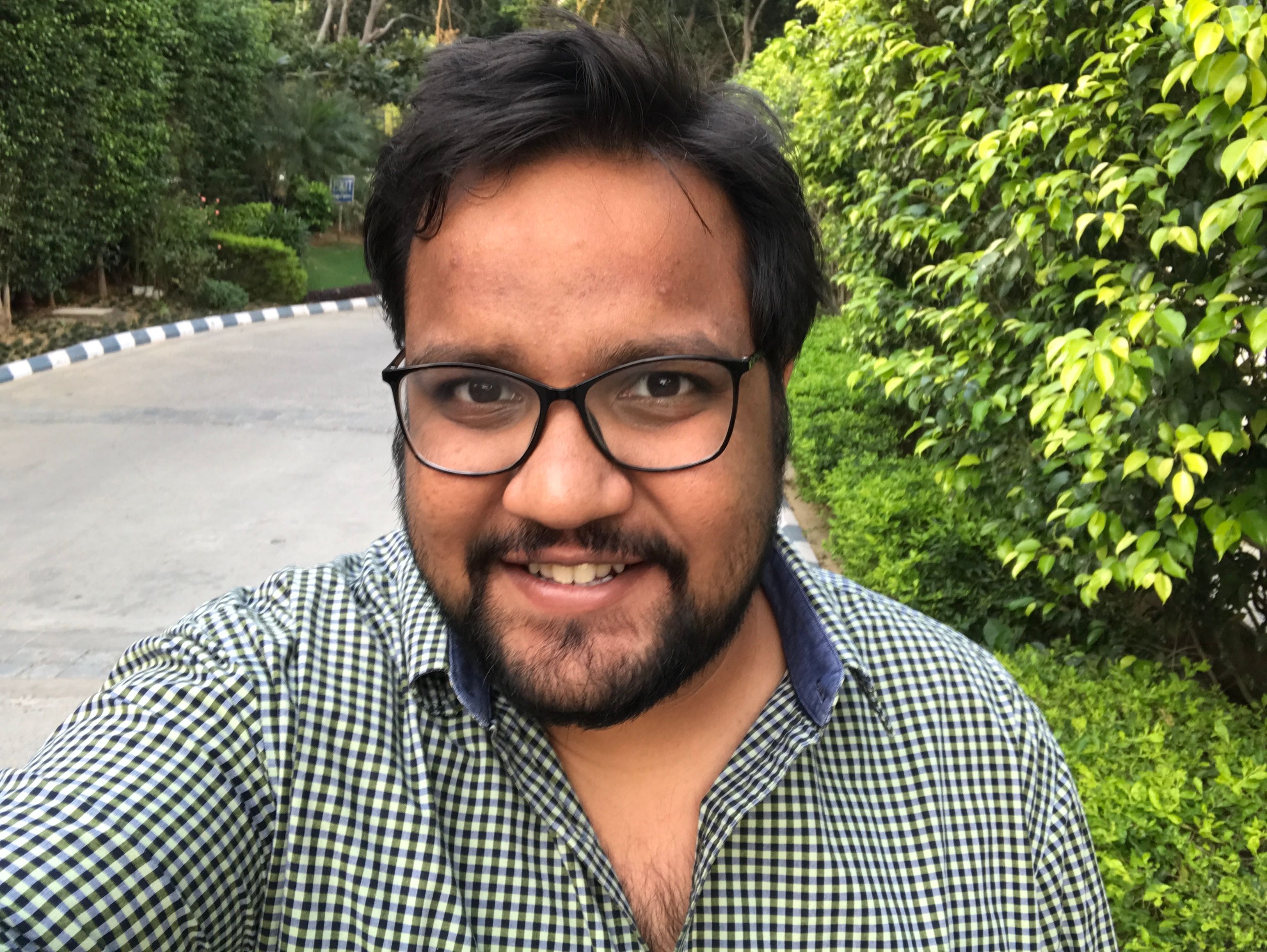 The iPhone 7 Plus is capable of shooting videos in 4K at 30fps. These videos are rich with detail and thanks to the in-built optical image stabilisation (OIS) the video footage that we shot was pretty stable too. The only problem with the iPhone 7 Plus is that it still captures the audio in mono. This is honestly a travesty in this day and age where even phones half (sometimes less than half) the price of the iPhone 7 Plus can do stereo recording.

Ever since Apple introduced slow motion video recording at 720p resolution and 240fps with the iPhone 6, it has sort of become the gold standard for slow motion videos on a phone. And that fact doesn’t change with the iPhone 7 Plus either. We still get comparably great footage and in the right light the results are really impressive – at least for a phone. Take a look at the footage below for your own perusal.

Dual cameras on a smartphone are nothing new. However, Apple takes it up a notch by —  dare we say it once again — making it better and quite possibly the best yet. Currently, the Huawei P9 and the LG G5 are the most recognisable smartphones from the Android fraternity to sport dual cameras. Huawei’s implementation uses the secondary camera uses a monochrome sensor to capture more details and light, in general, whereas the LG G5 uses the secondary camera to capture a wider area of view. However, the iPhone 7 Plus’ with its optical zoom and Portrait mode (for added depth) actually produces more interesting and usable results when compared directly with the Huawei P9 (review) or the LG G5 (review).

Granted, the pictures captured by the iPhone 7 Plus may not be as good as the Samsung Galaxy S7’s — which we incidentally proved in our direct comparison — but we still think that Apple has that one trick up its sleeve to actually make us sit up and take notice. This is, quite honestly, some ingenious engineering at work.