Till about a few years ago, tablets seemed to be the perfect bridge between smartphones and laptops – letting users consume multimedia and even do productive tasks, while being portable enough to be carried around easily. But after the initial momentum, tablets, as a category, didn’t find much uptake and simply came across as oversized smartphones. Thankfully, laptop manufacturers decided to disrupt themselves to become more modern, and the result of the same is 2-in-1s, also known as convertibles. While initially, 2-in-1s were exorbitantly priced, nowadays they are available in the affordable segment as well. ASUS’ recently-introduced ZenBook Flip UX360CA is also one such laptop. Available in multiple configurations, its price starts at Rs 49,000. We got a chance to use it as our working machine and here’s what we think about it. 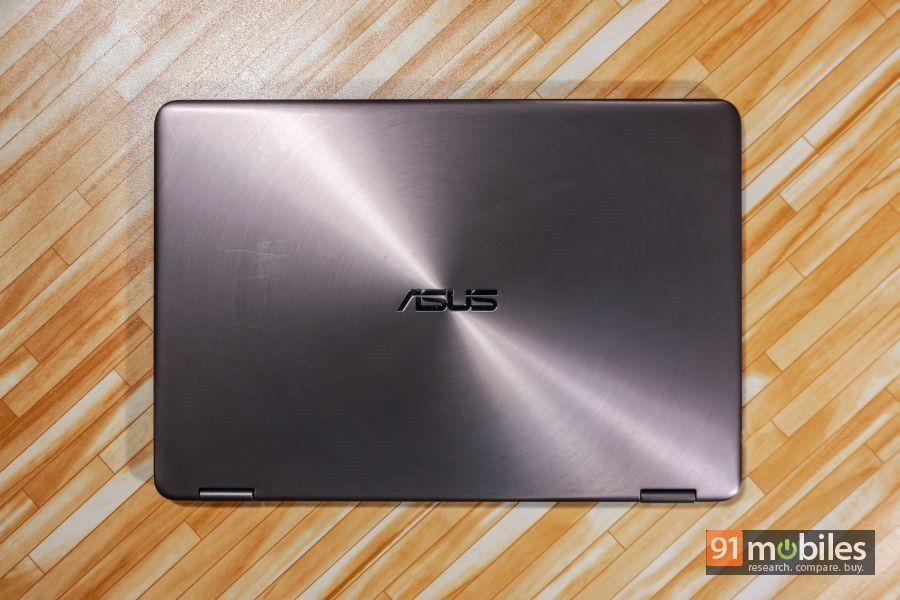 Design and display: sturdily-built with a 360-degree flip

With its size and premium look-and-feel, the ASUS ZenBook Flip can easily give some high-priced ultrabooks a run for their money. Tipping the scales at just 1.3kg, the laptop can be carried anywhere with ease. It also manages to be quite slim at 13.9mm. 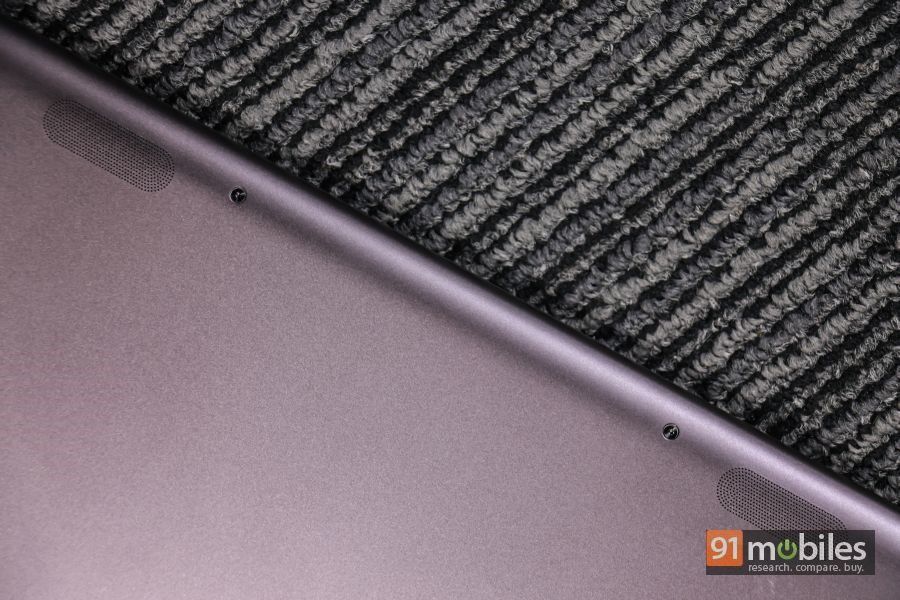 The Taiwanese company has carried over its Zen design philosophy from smartphones to laptops too, with a similar concentric circle pattern on its outer lid, which bounces back the light in different directions. While our review model sports a classy grey hue, the ZenBook Flip is also available in a flashy gold colour. It isn’t just about looks though, since it has been crafted from aluminium the laptop is pretty robust too. 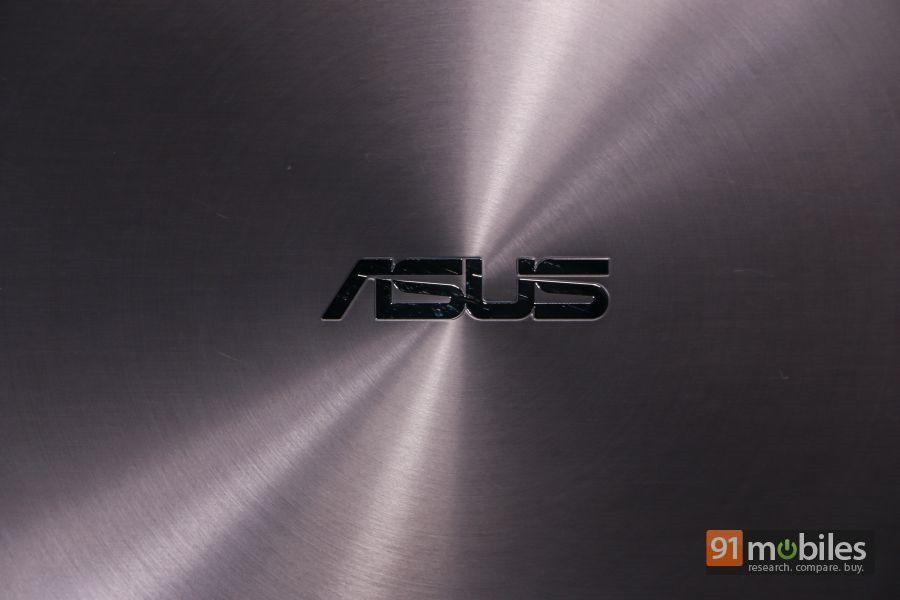 Once you open the lid, the 13.3-inch screen catches your attention thanks to its full HD resolution. At a time when most laptops offer an HD resolution of 1,366 x 768 pixels, the sharpness of the ZenBook Flip’s display is impressive. It reproduces rich colours and viewing angles are also good. While brightness levels are also nice, they do fall short under harsh sunlight. But of course, the highlight of the ASUS ZenBook Flip UX360CA – as its name (and model number) suggests – is the fact that its screen can be flipped 360 degrees, letting you use it as a tablet, or various modes in between. The hinge mechanism makes it seamless to switch between the laptop or tablet mode, or even use the device in the tent position – which is ideal for watching movies. Sadly though, it’s not really sturdy which means that the screen might not hold steady, and it could wobble, when you’re in a moving car for instance. 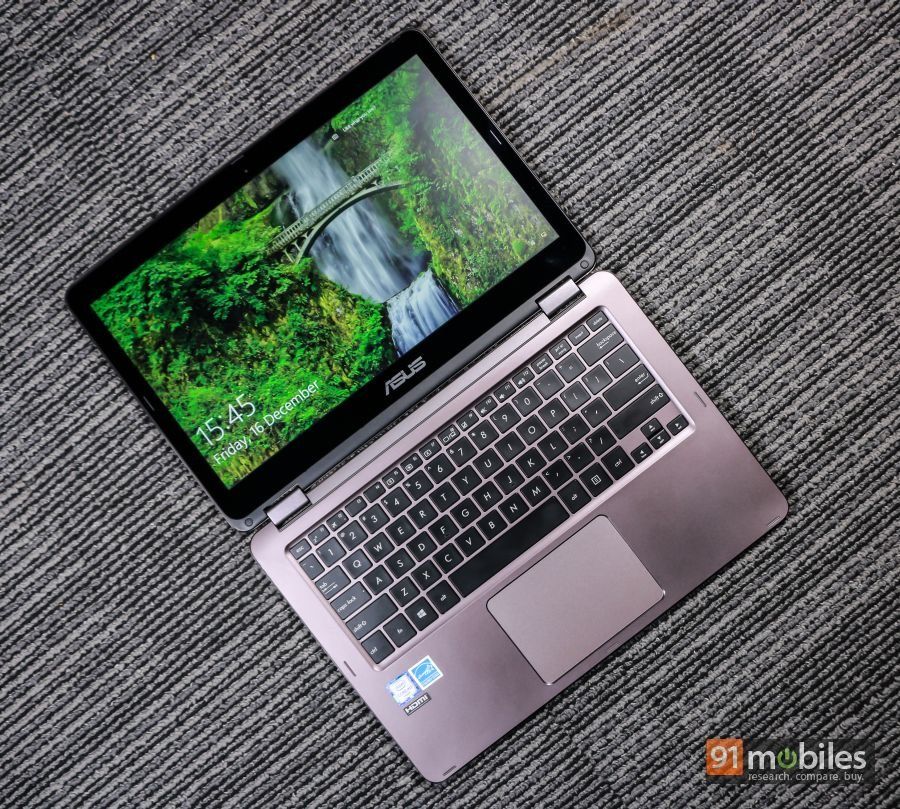 The touchscreen response is fantastic, and there isn’t any lag. For apps and features that support touch, it’s accurate too. But many a times, it’s quite frustrating too, since Windows isn’t built for touchscreens from the ground up.

Talking about the availability of ports, then the ZenBook Flip should be able to meet your requirements. It features two USB 3.0 ports on either sides. Interestingly, the ultrabook is future-proof too as it has a USB-Type C port on the right edge. It’s alongside the power input, micro-HDMI port (you get the HDMI to micro-HDMI cable bundled in the box) and a 3.5mm headphone socket. On the left spine, you’ll find the SD card slot, LED indicators that shows the status of charging and laptop’s power on / sleep state. Since you can use the Flip as a laptop too, it has dedicated volume buttons along with the power toggle. 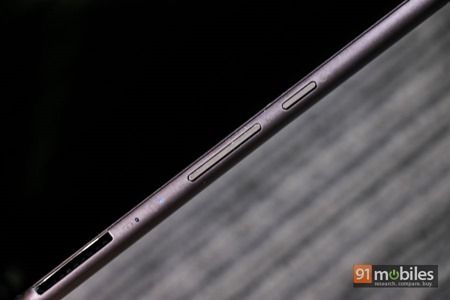 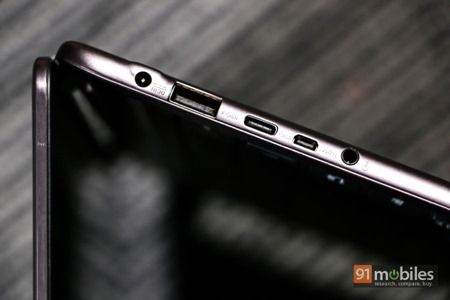 The speaker vents are placed at the base, which is an odd placement. While the sound output is decent, it’s completely muffled when the ASUS ZenBook Flip is used in the tablet mode. 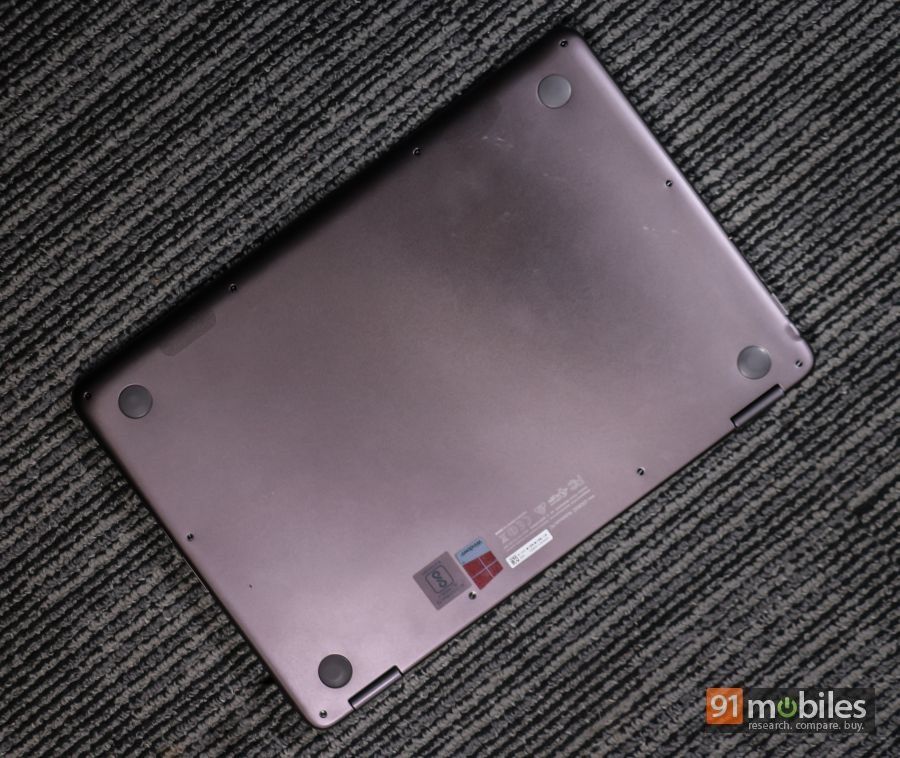 ASUS ZenBook Flip’s chiclet keyboard has a good travel, and while might take some getting used to, lets you type comfortably. We were able to type continuously for long sessions at a fast pace and in an accurate manner. The keyboard doesn’t skimp on any keys, and the function keys also double up as volume and brightness controls, and more. Although, we’d have loved if the buttons were backlit. 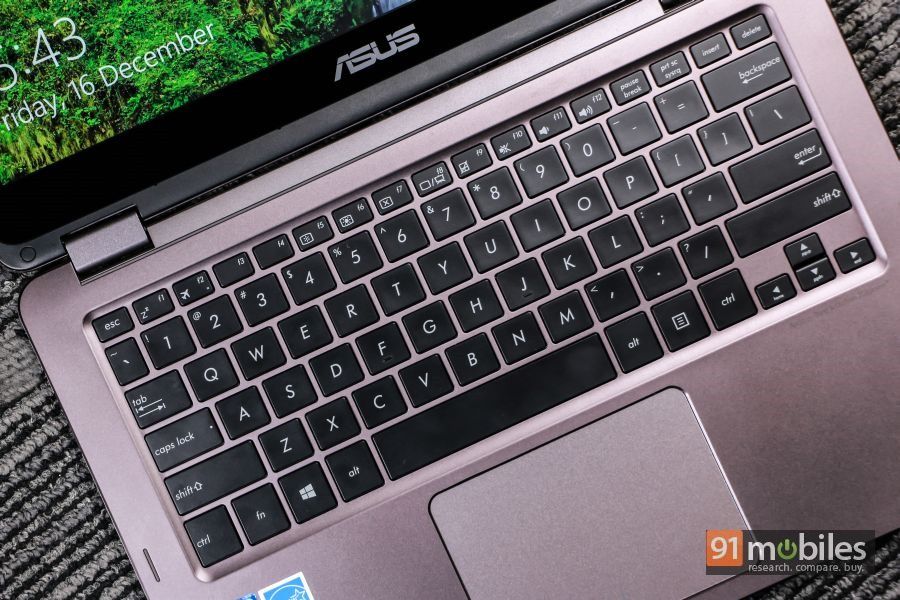 The touchpad has a large area and supports left and right clicks along with various gestures such as zooming in or out, among others. Sadly though, it’s extremely sensitive as we zoomed into websites, images, etc. inadvertently many times. 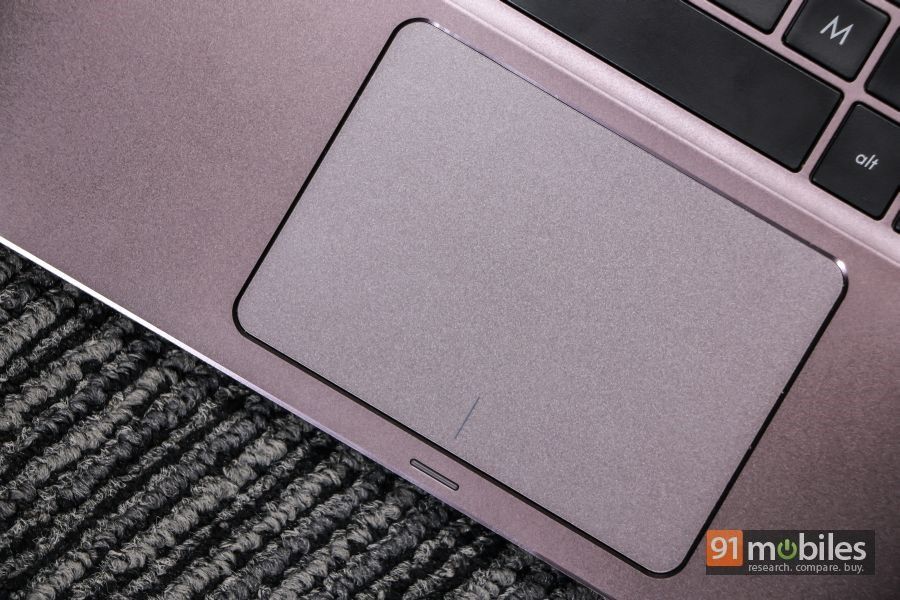 Being an ultrabook, the ASUS ZenBook Flip isn’t meant for performance-oriented tasks, yet it certainly manages to keep up with most task. The device employs Core m3-6Y30 processor, which along with being power-efficient ensures that there’s no need for cooling vents as it’s part of Intel’s 14nm fanless chipsets. While the 0.9GHz clock speed of sixth-gen CPU from Intel might not inspire much confidence about Flip’s capabilities, we didn’t face any issues in running usual applications such as multiple tabs (20+ on an average) on Google Chrome, MS Office suite, and media player, among others. The multitasking aspect is taken care of 4gigs of RAM, which proves to be sufficient for most tasks. 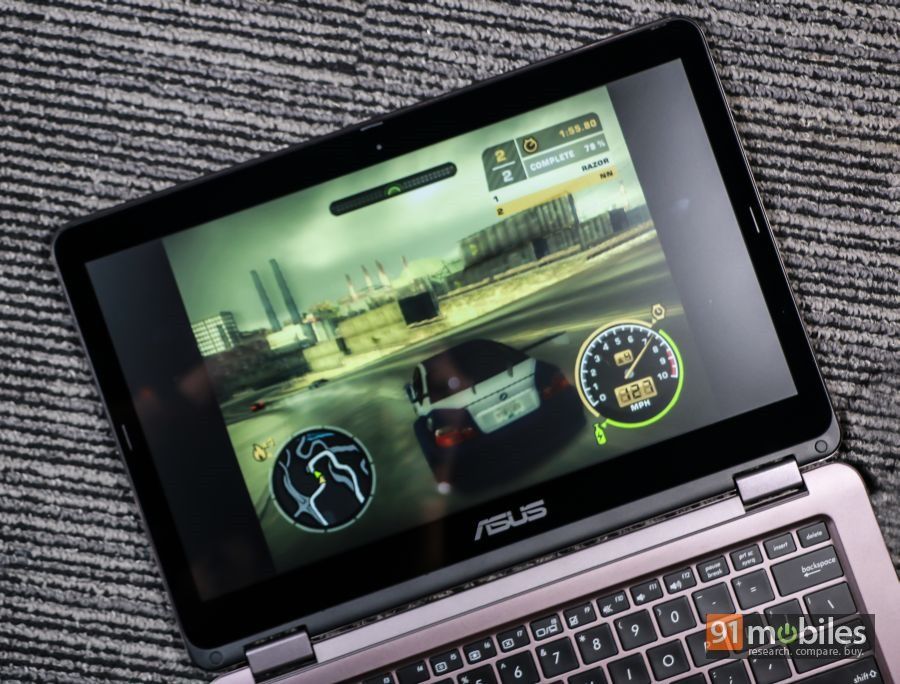 Although, when you put the ZenBook Flip through heavy tasks such as playing a 4K video or running Need for Speed: Most Wanted (it can handle only run the 2005 version of the game), then it certainly seems to be bowing down to the pressure. Even in day-to-day usage, there are times when the laptop doesn’t respond instantly. With the use of the fanless processor, the device ensures that it keeps the temperature under control.

Helping the ASUS ZenBook Flip in offering a smooth performance is an SSD. As expected, it not only offers faster read / write speeds than conventional HDD’s, it also offers faster boot times. What’s interesting however, is the fact that ASUS is offering ample amount of space with the 512GB SSD, unlike many other devices of its class whose capacity is 128 or 256GB.

In terms of core numbers, it performs averagely as per the results of PCMark Benchmark 8.0. It scored 2030 in the Home test, but fared comparatively better in the Work suite with a score of 2312. For creative professionals, it might not be the ideal choice, as it got 2,038 in the Creative test suite. 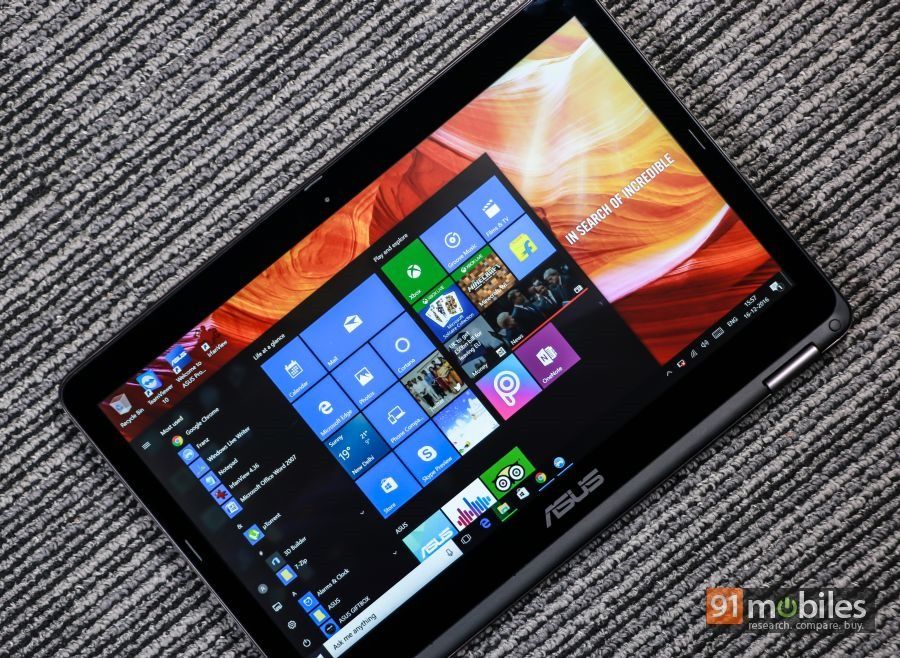 The Flip is a Windows 10-based ultrabook, and thankfully, ASUS hasn’t taken the same approach with it as its ZenFone range of smartphones. So, there isn’t much bloatware except a few apps such as Dropbox and WPS Office.

ASUS hasn’t compromised on the connectivity aspect of the ZenBook Flip as just like the decent number of ports, it also supports latest wireless standards, including Wi-Fi ac and Bluetooth 4.1. It’s also compatible with Intel’s Wireless Display technology.

Fuelling the ASUS ZenBook Flip is a three-cell battery, which the company promises would be able to deliver up to 12-hour battery life. While we weren’t able to hit that number, it does manage to last an entire working day usually.

The ASUS ZenBook Flip is a well-rounded offering with all the attributes of a 2-in-1 ultrabook along with decent hardware. Our review unit retails at around Rs 58,000, but you can also opt for the lower-priced model although you’d need to make do with the 128GB SSD.

Having said that, if you are a performance freak, or don’t need a convertible, then you’ll be able to find much better and powerful laptops in this price bracket. Even when we talk about 2-in-1s, the ASUS ZenBook Flip would be competing against Lenovo’s Ideapad Yoga 500 and HP Pavillion x360. While they both offer conventional Core i5 CPUs and 1TB HDD storage, they also weigh slightly more in comparison. 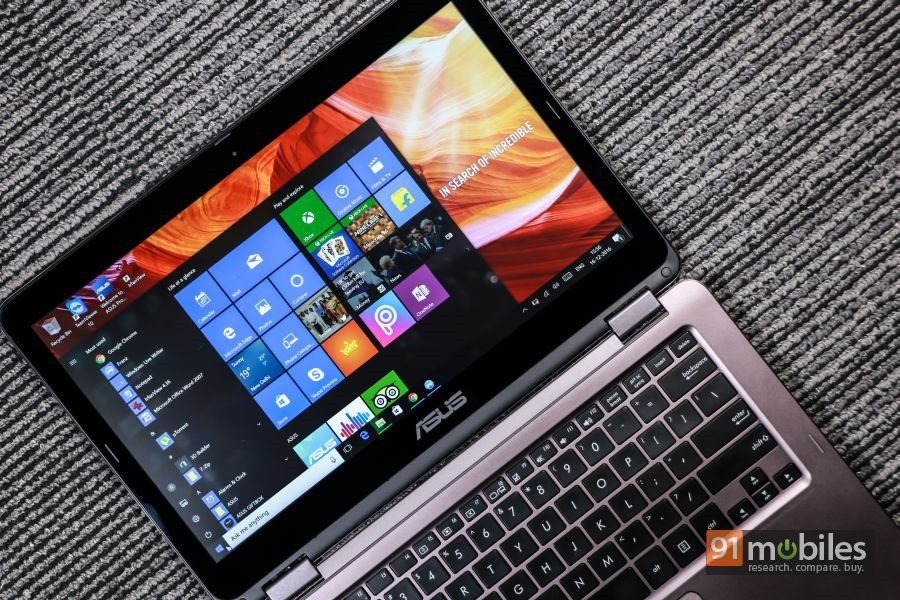 Overall, if you’re looking for a convertible while keeping your bank balance in check, then the ASUS ZenBook Flip could be a great buy.