“The Canon EOS 200D II presents itself a complete package”

Japanese major Canon is the world’s biggest camera brand, and not without good reason. With a vast portfolio spanning various price points and use cases, the company aims to ensure that it can cater to everyone. After doubling down on its mirrorless range with the launch of the EOS R (review) and EOS RP, it’s now shifting its focus (pun intended) to the DSLR segment. It has recently introduced the successor to its mid-segment EOS 200D, aptly christened EOS 200D II. With a starting price of ~Rs 50k, the camera looks to offer high-end features at a not-so-high cost. And if my experience is anything to go by, then the device certainly manages to do that. Now that I have your attention, let’s begin the review of the Canon EOS 200D II to see if this is what you should be going for. 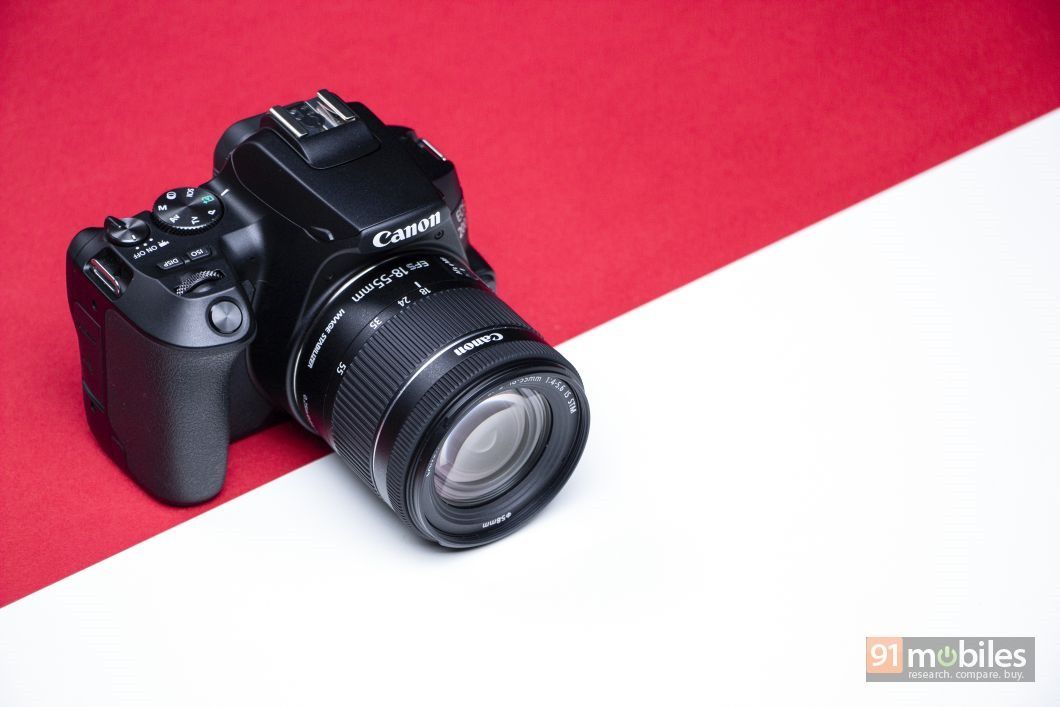 From afar, the EOS 200D II is just like any other Canon DSLR. What that means is that you’ll see the family design language, all with a grip on the right-hand side, and a hump on the top offering the hot-shoe mount. But it’s when you hold the shooter that you get a surprise, and a pleasant one that if I may say so. Well, that’s because, the company seems to be learning from mirrorless cameras and thus has ensured that the 200D II is not only fairly compact, but lightweight too. 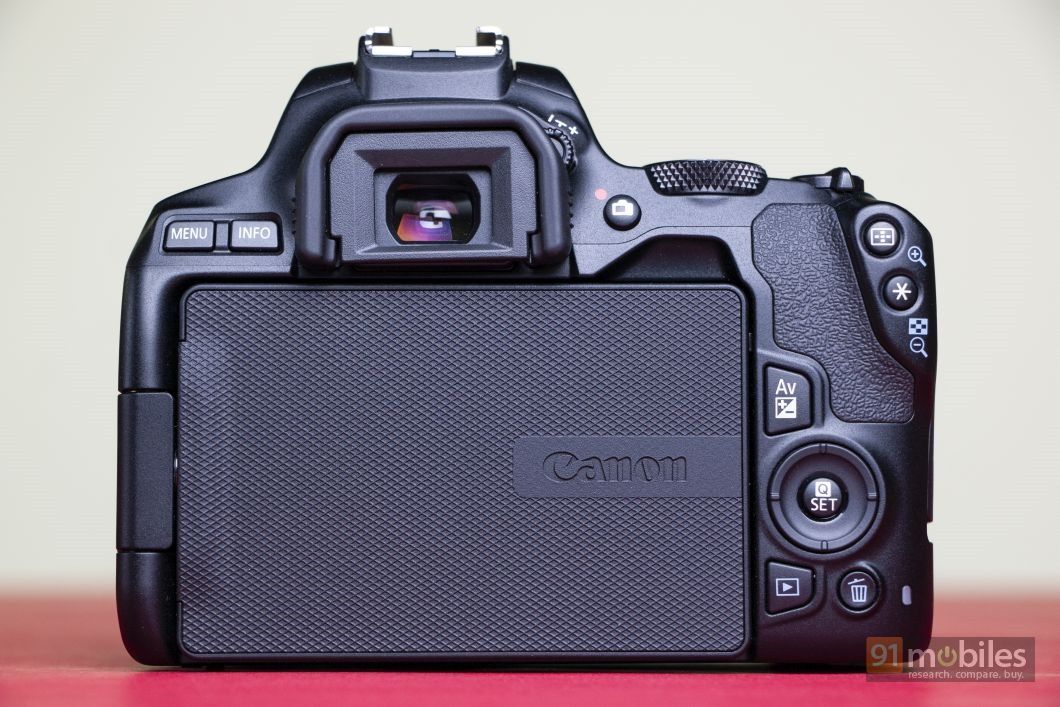 In fact, one of my colleagues remarked that it might be too light (at 451g, for the body only) to be considered as a serious camera, which is nothing short of outstanding for the kind of features it packs. While my review unit arrived in all-black hue, you can also opt for silver or white colourways. Shooting with the camera has been a delightful experience, to say the least, and I could easily use it single-handedly for extended durations without any sort of fatigue kicking in. 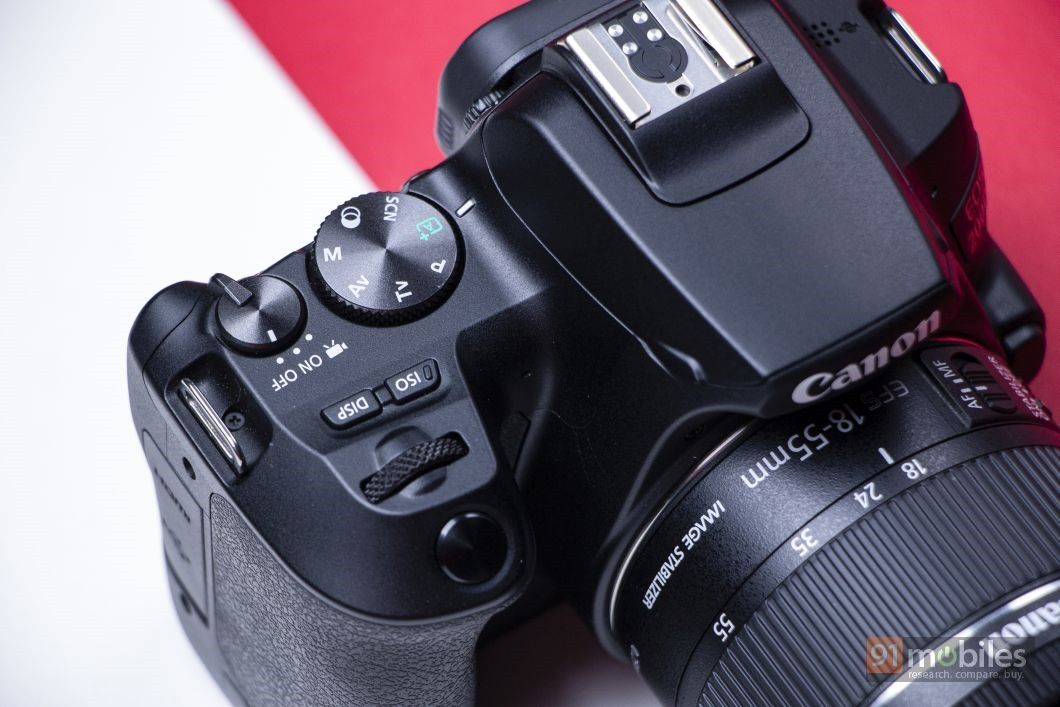 If you’ve used any camera from the brand before, then you’ll find the Canon EOS 200D II quite comfortable to use. While the controls aren’t placed in familiar locations, you could get used to the arrangement pretty quickly. The shutter button can be found towards the front on the top, while there’s a dial for tweaking shutter speed before it. What I really liked are the buttons for ISO and Disp on top, making it easier to control these aspects. Then there’s mode dial offering the usual options along with the knob for turning on the camera and going into the video mode directly. On the front, there are metering adjustment and exposure control buttons with the D-Pad further below. Above that you’ll find the button for adjusting the aperture (along with the main dial) and below it, the preview and delete keys. Above the screen, you’ll find the optical viewfinder. Besides that, there’s a video recording button on one side and Menu and Info keys on the other. 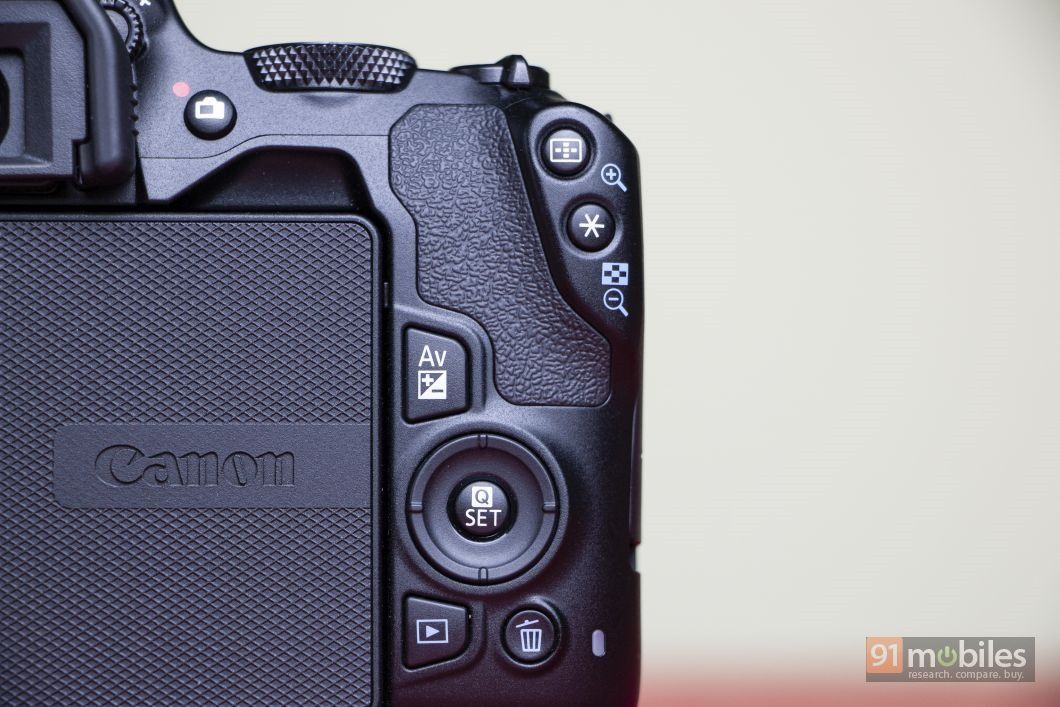 So what’s the benefit of moving some buttons up top? Well, you get a larger screen of course. The EOS 200D II features a fully-articulating 3-inch display, which is a joy to use and allows for a lot of creative options to frame a shot. With a resolution of 1.04-million dots, the TFT panel offers crisp visuals. Not only is it visible under the direct sunlight, the fact that it’s a touchscreen also makes it extremely user-friendly. 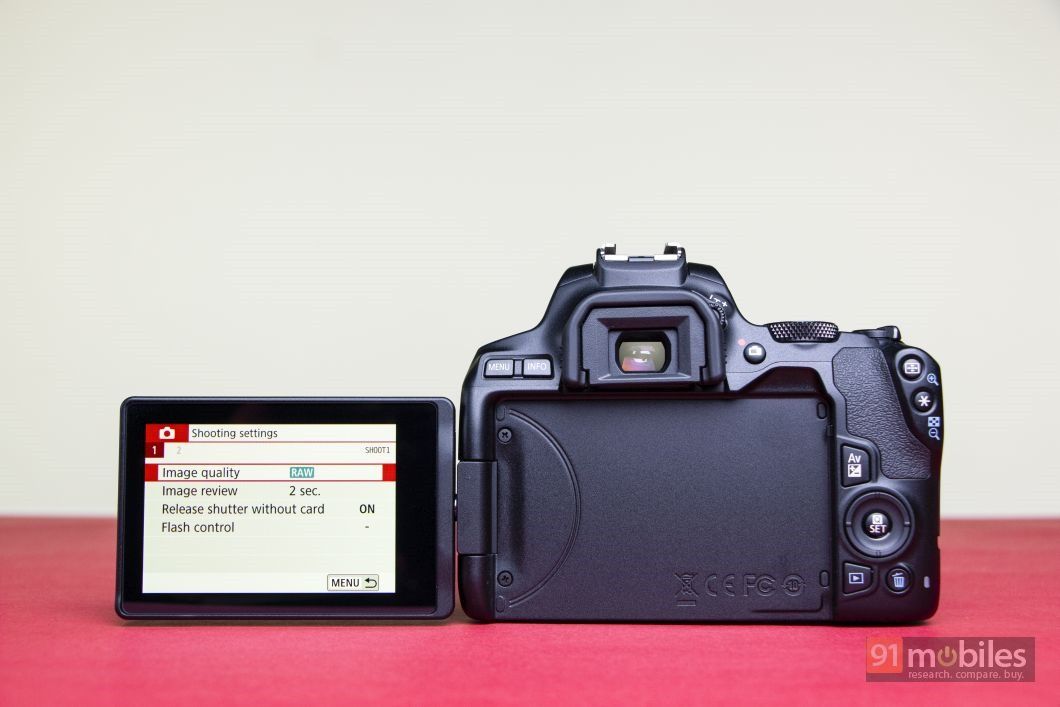 Moving to the sides, you’ll the HDMI socket and USB port secured by the rubber flap towards the right and the opposite that, there’s a port for accessory and microphone input. At the base, you’ll find the tripod mount along with the compartments for the battery and SD card. 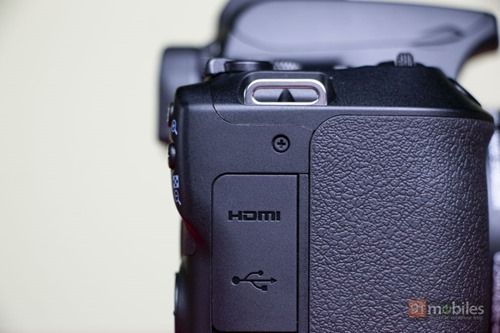 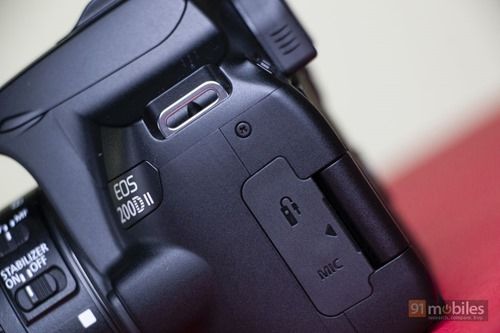 Overall, the EOS 200D II’s construction will appease the professionals and novices alike.

In terms of core specs, the Canon EOS 200D II flaunts a 24-megapixel CMOS sensor. What makes the device quite powerful is the fact that it shares its image processor with the brand’s higher-end offerings. The Digic 8 processor ensures that the shooter ensures smooth performance, be it for clicking photos or videos. With dual-pixel autofocus technology, the device is able to lock the focus on the subject quickly and thanks to nine AF points, you do get a good range as well. Along with the One Shot focus, there’s also AI Servo for shooting moving objects, while the AI Focus mode chooses between the two automatically. As far as continuous shooting is concerned, the device can capture up to 5fps, which is below average. With Servo AF, it goes even lower to 3.5fps. Having said that, I certainly liked the fact that it comes with Eye-detection autofocus, making it easier to shoot human subjects. For countering handshakes, the camera comes with lens-shift image stabilisation. 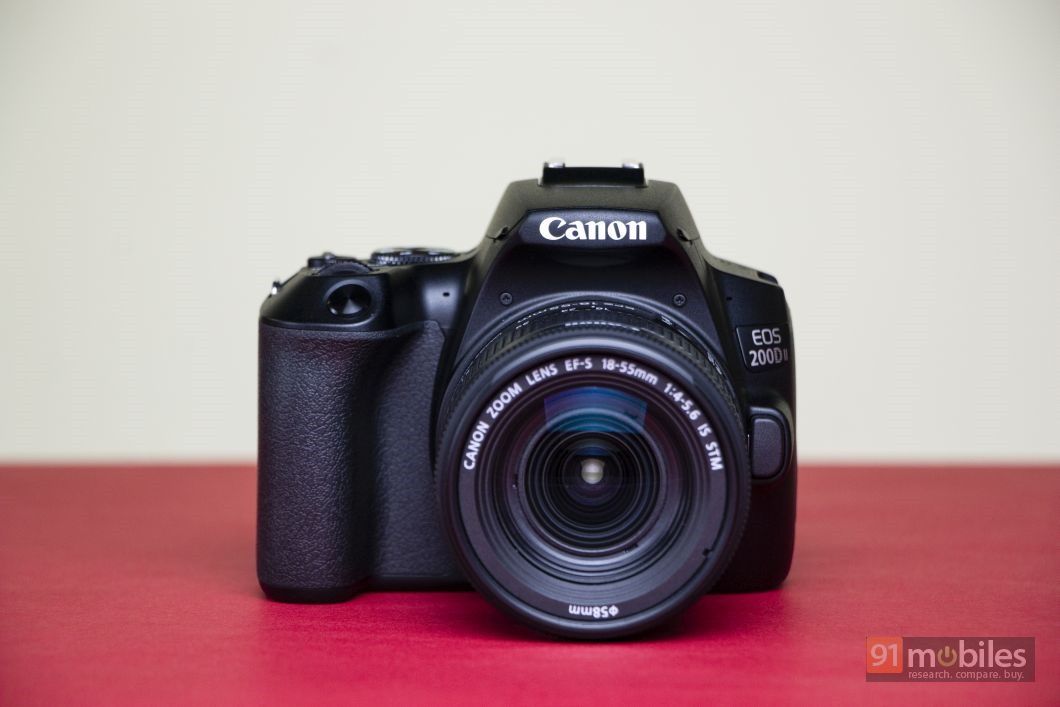 While experienced photographers will certainly love the EOS 200D II for its versatility, even novices won’t find it difficult to use the shooter as the Guided Display UI offers helpful prompts while using it.

Being part of Canon’s lineup of DSLRs mean that the EOS 200D II is compatible with a wide range of lenses. As a package, buyers can either opt for the typical 18-55mm lens, or go for the dual-kit lens in the form of the 18-55mm lens and 55-250mm lens with the body. Both the lenses come with image stabilisation built in, and offer variable aperture of f/4-f/5.6. 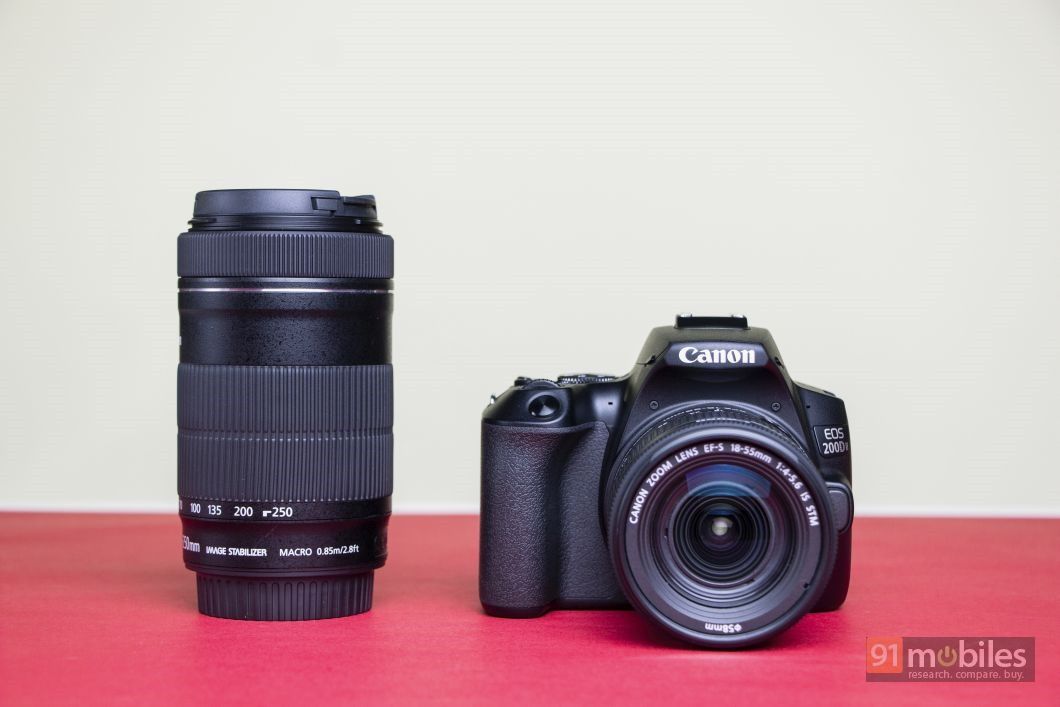 All that sounds enticing, but the true test for a DSLR is its image quality (duh!), and I’m glad to report that the Canon EOS 200D II won’t disappoint you in this regard. Whether you shoot in auto or manual, the shooter captures crisp pictures with natural colour reproduction. The images offer a great level of details and with right aperture, you can get stunning bokeh shots too. In low-light however, the device struggles in keeping the exposure levels under control, and there’s a noticeable amount of noise once you zoom in to the original resolution. Similar to previous offerings from the brand, the shooter features Creative Assist mode letting you capture shots with a wide variety of effects.

The EOS 200D II is also targeted at the fast-growing vlogging segment. Thanks to the vari-angle screen, you could choose to shoot not just landscapes and subjects, but yourself too. The device supports 4K video recording at 25fps, and even with a cropped output, it’s impressive for the price segment it’s operating in. The footage is quite smooth too with focus jumping instantly as well. If you want even more stable output, you can also enable the Movie Digital IS mode with select lenses. You’d also appreciate the fact that you can capture time-lapse video with the shooter.

In terms of the battery, the LP-E17 pack on the Canon EOS 200D II promises to last 500+ shots (with the viewfinder) or shoot a video of up to an hour and a half. My experience with the camera has been quite similar. In fact, you could easily take the shooter on a two-day trip without having any sort of battery anxiety. 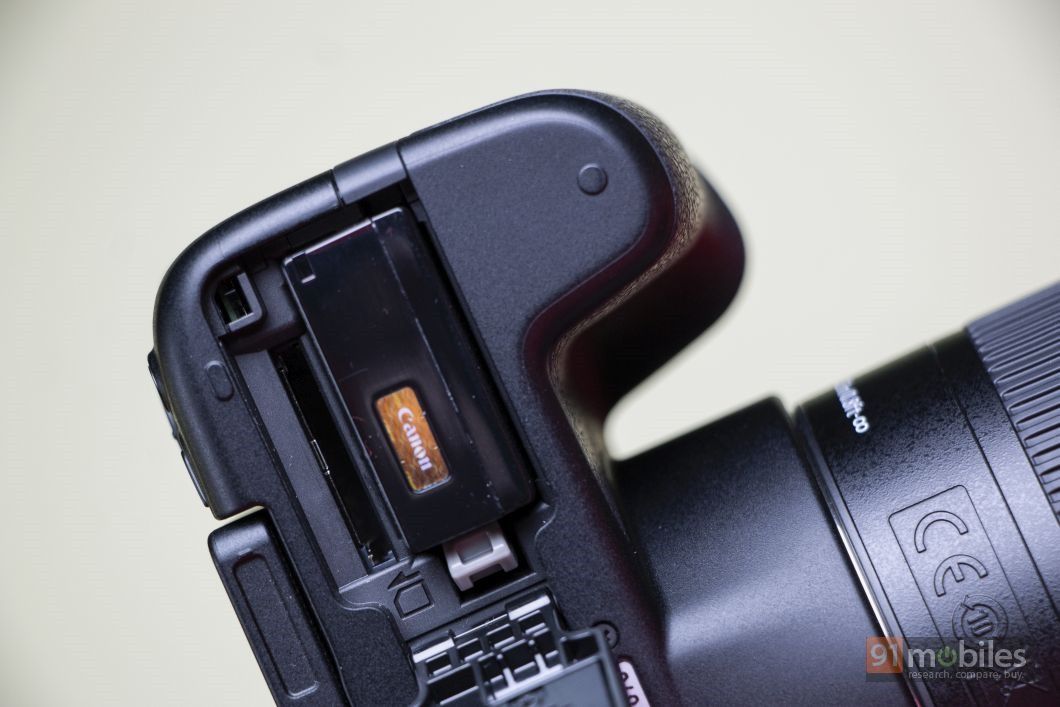 As far as the connectivity options go, Canon has packed in everything you could expect. The device comes with Bluetooth 4.1 and Wi-Fi. You can also instantly transfer photos from the camera to your Android or iOS smartphone by means of the Camera Connect app.

Bundled with the 18-55mm lens, the Canon EOS 200D II carries a price tag of Rs 52,995 (available online for slightly lower). If you chose to go for the dual-kit lens, then you’ll need to shell out Rs 64,995. For the price, the shooter is a great choice for those who are looking to step up their photography skills without feeling like they are being robbed off their bank balance. The device ticks all the right boxes, from offering good images and videos, to having a tilt screen as well as offering great battery life. Moreover, its lightweight build also makes it a great everyday companion.

Of course, that doesn’t mean that the EOS 200D II doesn’t face any competition. The Sony A6300 is a capable camera if you don’t mind going for a mirrorless camera. Then there’s the Nikon D5600, although it isn’t as feature rich. 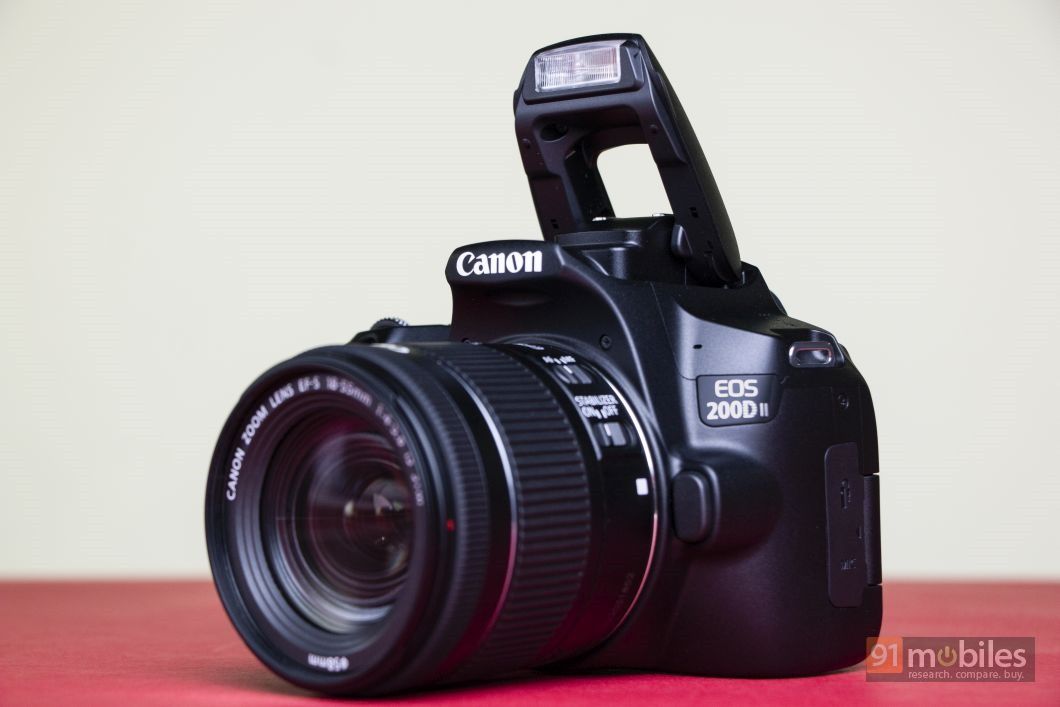 However, everything considered, Canon’s EOS 200D II presents itself as a complete package which is available at an attractive price point, with its compact footprint also adding to its charm.