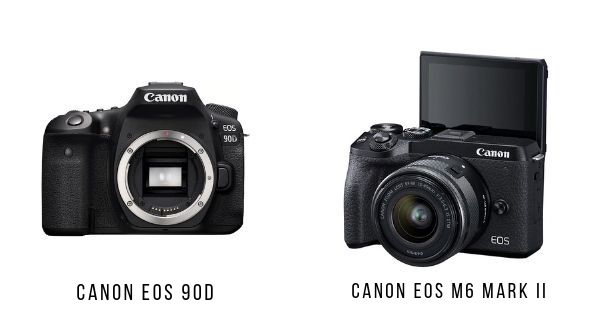 Canon has launched the EOS 90D DSLR and the EOS M6 Mark II mirrorless camera in India. The cameras were globally announced back in August this year, and are now available for purchase in the country. Both these cameras bring updated design, improved sensors and more to the table. According to Canon, the EOS 90D is mostly aimed at event photographers, whereas the EOS M6 Mark II is a great choice for budding photographers. The cameras share several common hardware features, such as the 32.5-megapixel APS-C CMOS sensor and the Canon DIGIC 8 image processor.

Coming to the features of the two cameras, the Canon EOS 90D gets improved design compared to the EOS 80D, better viewfinder, a new high-precision Dual Pixel CMOS auto focus tech, and the 32.5-megapixel APS-C sensor. The camera also offers high frame rate 4K recording in both cropped and uncropped options. It can shoot still photos at up to 10 frames per second and gets a 45-point auto focus system with face detection.

The EOS M6 Mark II features a more compact design and is smaller than the EOS 90D. It is a great tool for amateur photographers, especially those who’re into vlogging. This is a mirrorless camera and can shoot still photos at 14 frames per second. In RAW Burst mode, the camera can do 30fps still photography. It features a 3-inch touch display, and both cameras offer Bluetooth and Wi-Fi connectivity.

Both cameras use the latest Canon DIGIC 8 processor, which offers improved processing, responsiveness, and better images. The cameras also feature super fast electronic shutter speed of 1/16000 second, which is perfect for shooting fast moving objects/subjects. Canon also recommends these cameras for videographers. Do check them out at your nearest Canon store.