Canon’s range of DSLRs isn’t that old. It was just in 2000 when the Japanese giant took the covers off the EOS D30, the brand’s first digital single-lens reflex camera. Since then however, the company has come a long way. It’s a de facto leader in the professional camera segment. But now, its dominance is being challenged by another brand from its home country – Sony. Sony took a bet by introducing mirrorless cameras in 2013, and has now become the go-to option for anyone looking to buy mirrorless interchangeable-lens shooters. In 2018 however, Canon released its very first full-frame mirrorless camera to take on Sony. Christened the EOS R, the shooter comes with an all-new RF mount. But with a price tag of almost Rs 1.5 lakh, that too just for the body, can the device stand out from Sony and other contenders? That’s what I’ve been trying to find out after using the device for almost a month. Here’s how I’ll sum up my experience. 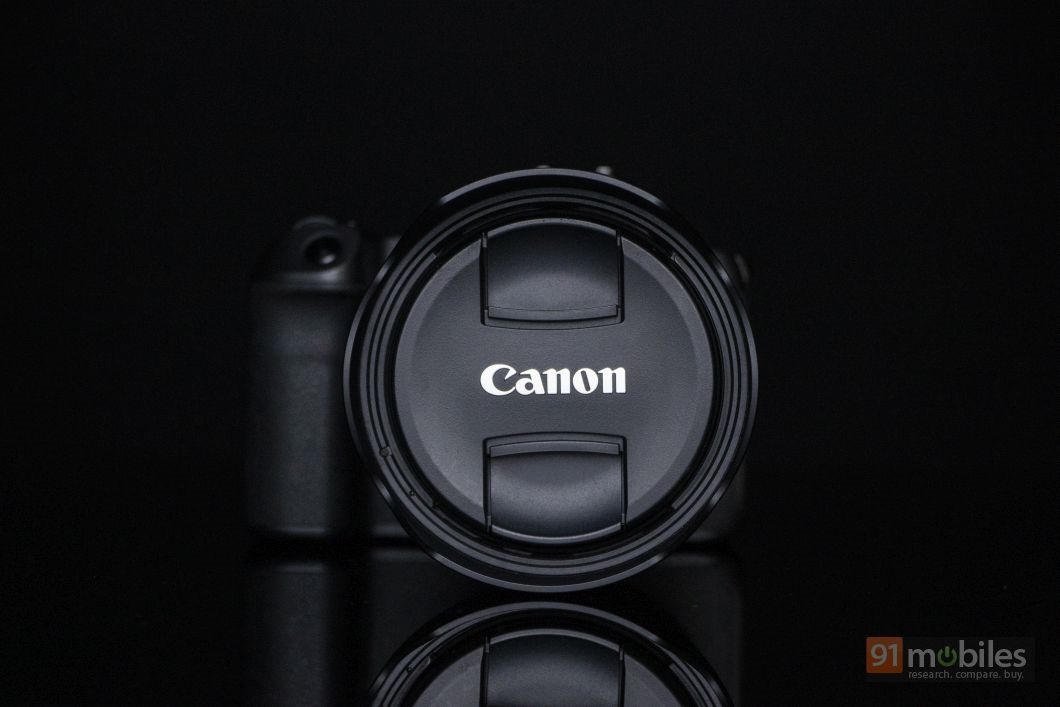 The Canon EOS R seems to be quite similar to the company’s 5D Mark IV camera, albeit lighter as the former doesn’t have any mirror mechanism. It’s only when you look closely that you’ll notice a number of differences between the two. 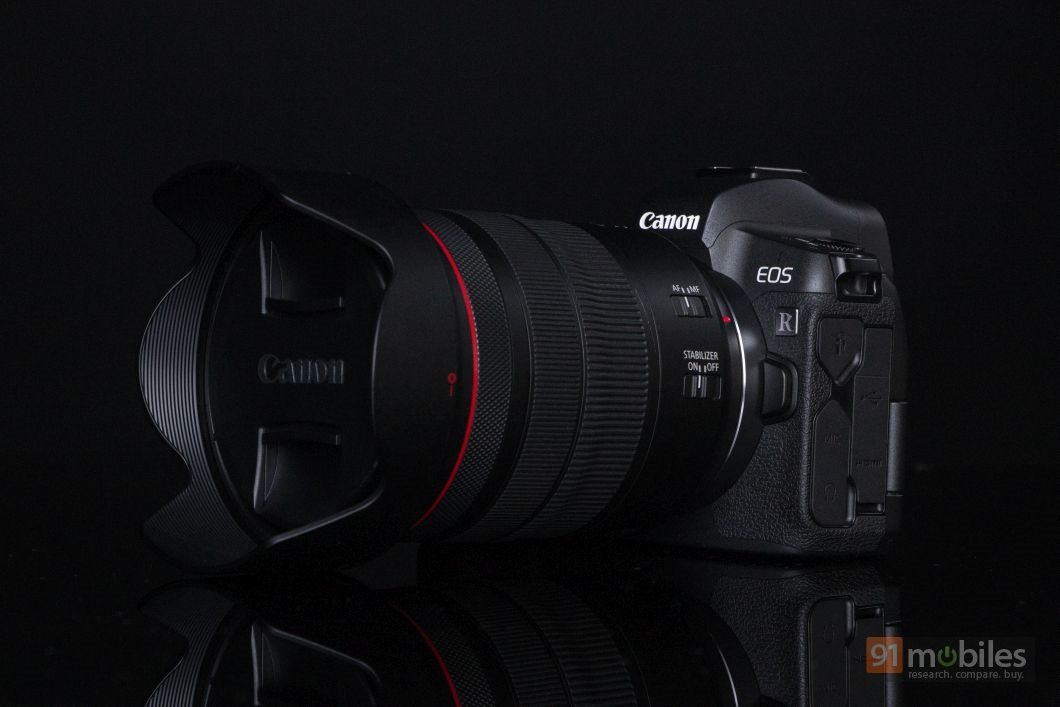 Firstly, the EOS R ditches the conventional mode dial that lets one switch between P, A, S and M modes, and instead uses a single mode button. There’s also a top-plate LCD alongside, which is quite useful as it shows the settings and offers black or white background depending upon the environment. The other buttons on the top of Canon’s offering stick to the usual… there’s a shutter button towards the front on the right, a customisable M-Fn button, a customisable dialler to change ISO, a video recording button, Lock button, a button to illuminate the LCD panel, and another customisable dialler surrounding the mode button. The company has also opted for an unconventional placement of the on / off toggle as its present on the left, with the hot-shoe mount beside it in an elevated position. 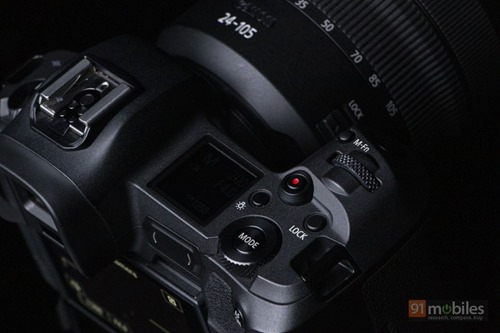 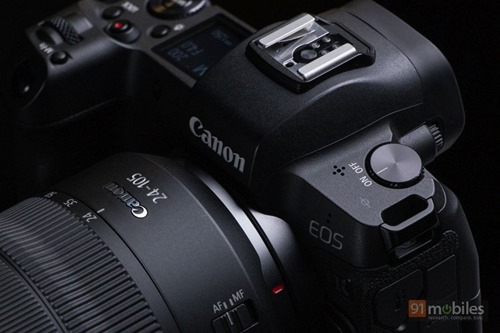 At the back, you’ll find the exposure and metering control buttons, autofocus toggle, with the info button and the D-pad present on the lower side unlike its usual position towards the middle. Below that, you’ll find the preview button and delete key. One interesting addition is a slider panel, which the camera maker is referring to as the Multi-function bar. As the name suggests, you can configure it to tweak anything from ISO levels to shutter speed or aperture by swiping on it or tapping the left or right side. On paper, it seems like a good idea, but in real life, I didn’t find it very useful as the settings can get changed inadvertently sometimes, as it’s placed exactly where one’s thumb will naturally rest. The EVF is quite sharp and you also get a diopter dial to calibrate the view. Towards the left, you’ll find the menu button. The EVF has a resolution of 3.96-million dots, ensuring that you don’t need the feel to use the LCD screen. 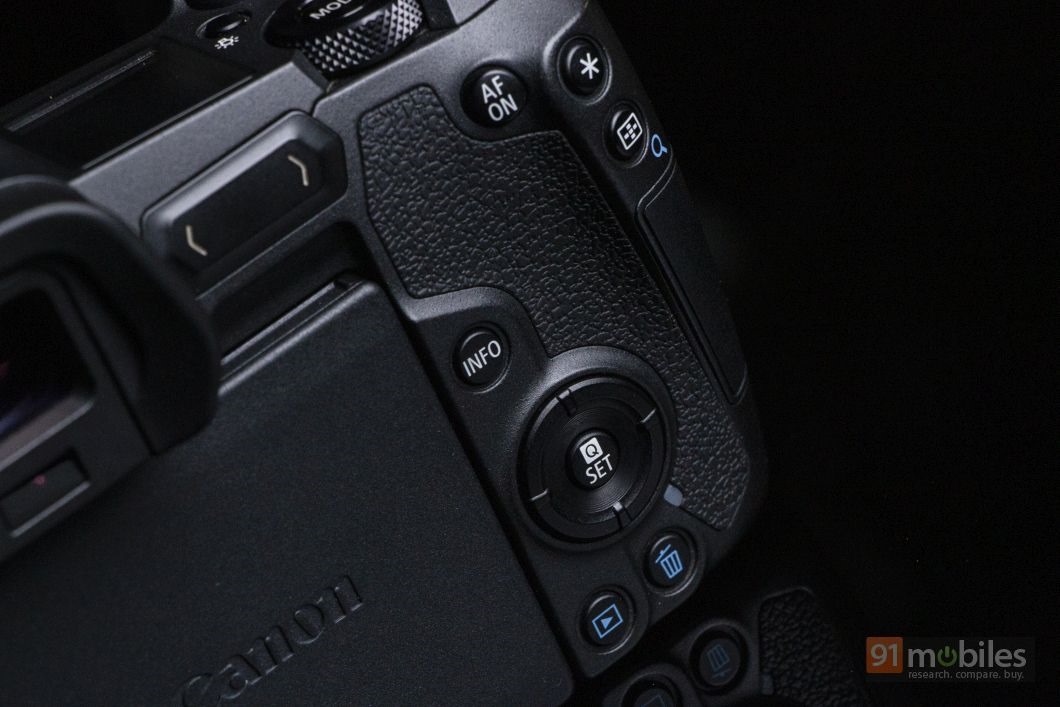 As far as ports are concerned, you’ll find the remote control terminal, microphone and a 3.5mm headset socket, HDMI and Type-C port towards the left. All of these ports are secured by rubberised flaps. On the right, you’ll find the SD card tray, and it’s worth noting unlike most professional cameras, the Canon EOS R only accepts a single SD card. At the base, you’ll find the battery compartment and a tripod mount. 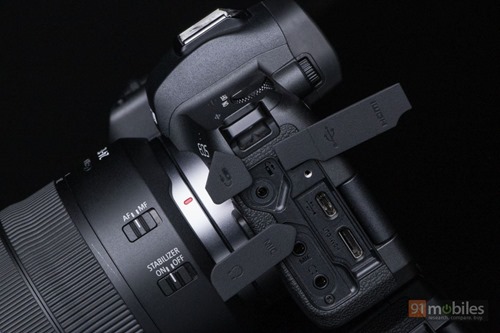 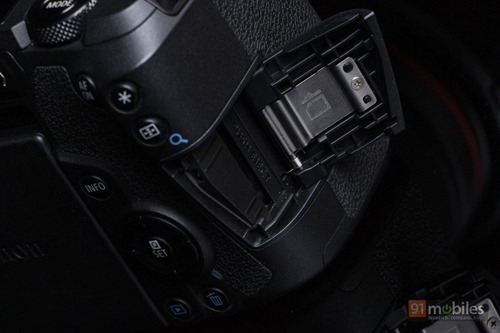 The Canon EOS R features a vari-angle touchscreen LCD measuring 3.15-inches. With 2.1-million dots, the display is quite sharp. However, its brightness isn’t the best and you might struggle in harsh sunlight. It’s also worth noting that you can rotate the screen 180-degrees, making the EOS R a good option for vloggers. 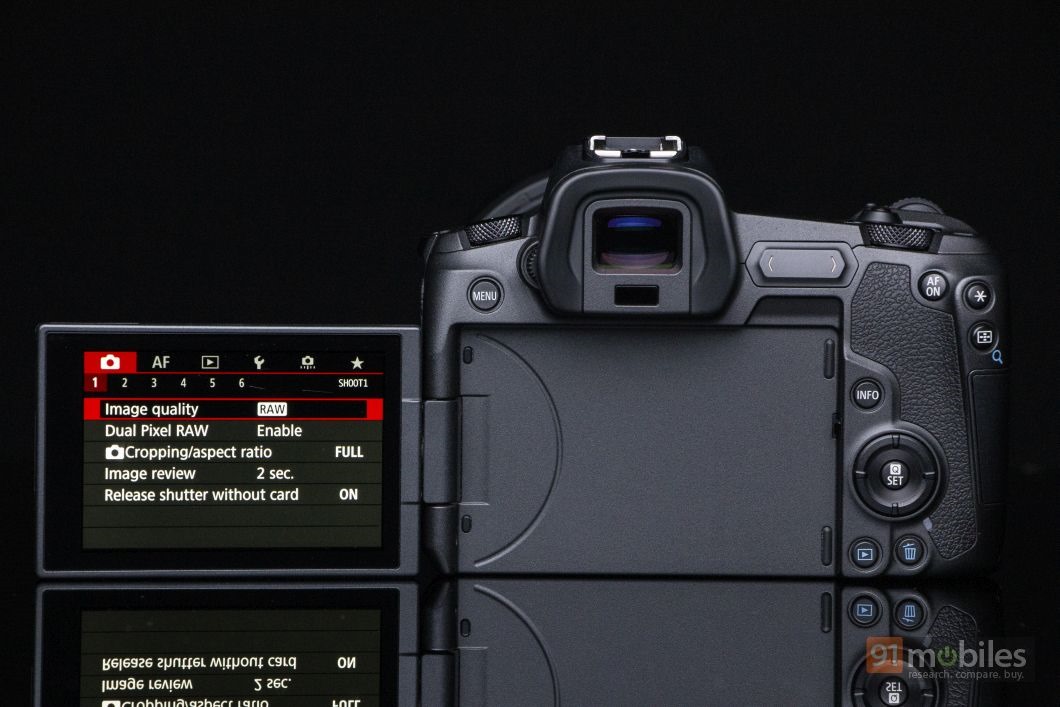 Without the lens attached, the EOS R feels quite lightweight in the hand, tipping the scales at 660g. However, that also means that if a large lens is attached then the body feels quite imbalanced. At the front, the shooter has a hand grip, which ensures that it can be held well with the right hand. While the outer body is made out of plastic, which is slightly odd considering the EOS R is a higher-end offering, it has used magnesium alloy inside to offer a robust build. The device is impervious to dust and splashes.

Similar to the 5D Mark IV, the Canon EOS R features a 30.3-megapixel CMOS sensor. While the pixel count is the same, the brand claims that the sensors are different. Furthermore, the mirrorless shooter utilises the latest Digic 8 processor. The device also gets the famed dual-pixel autofocus, and has 5,655 autofocus points. Moreover, it covers a wide focus area of 100 percent vertically and up to 88 percent horizontally. In terms of continuous shooting, the camera can shoot in 8fps (vs 7fps in the 5D Mark IV). If you want to use continuous autofocus, the speed drops to 5fps, and in case you are shooting people with face tracking on, the camera can capture at 3fps. While these speeds aren’t bad, they certainly aren’t best in class. The ISO support ranges from 100 to 40000. Along with the usual modes, there’s also a new Flexible-priority mode, which combines the functionality of the other modes such as shutter priority and aperture priority to make it easier to select the desired shutter speed, aperture, ISO speeds, or exposure. 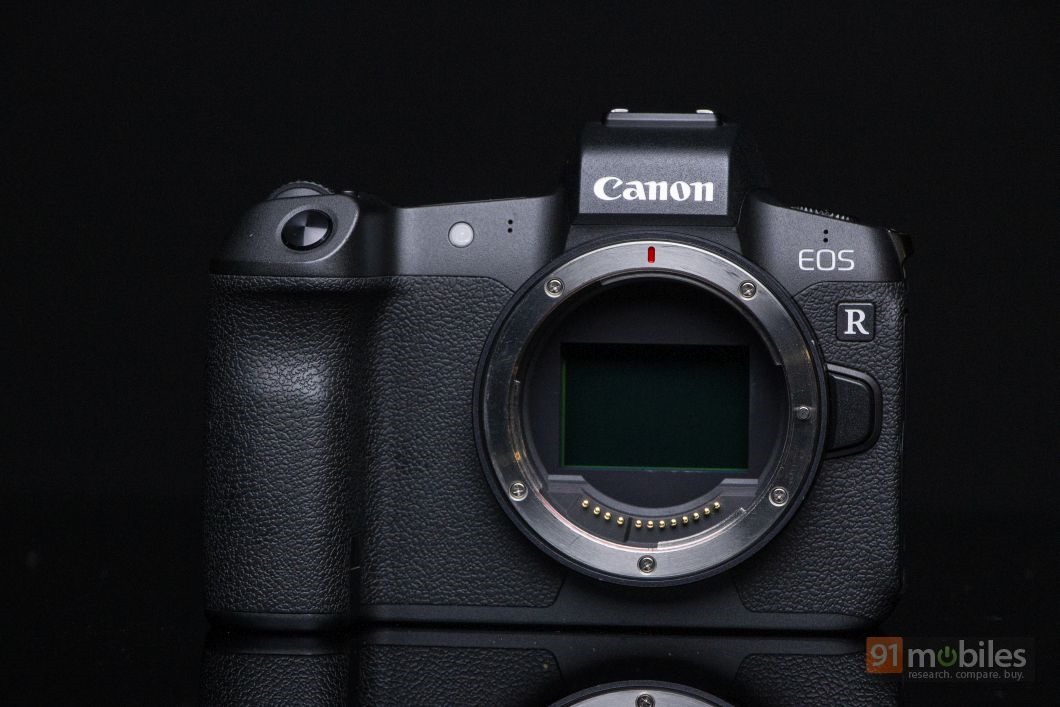 The EOS R can shoot stills in JPEG and C-RAW modes. For videos, the camera can record at 4k resolution at 30fps, while full HD videos can be shot at 60fps. Sadly, if you want to shoot 120fps, then the resolution drops further to 720p.

One thing worth noting is that the EOS R doesn’t support in-body image stabilisation and makes use of lens stabilisation itself. That means it’s important to choose lenses which come with stabilisation support. 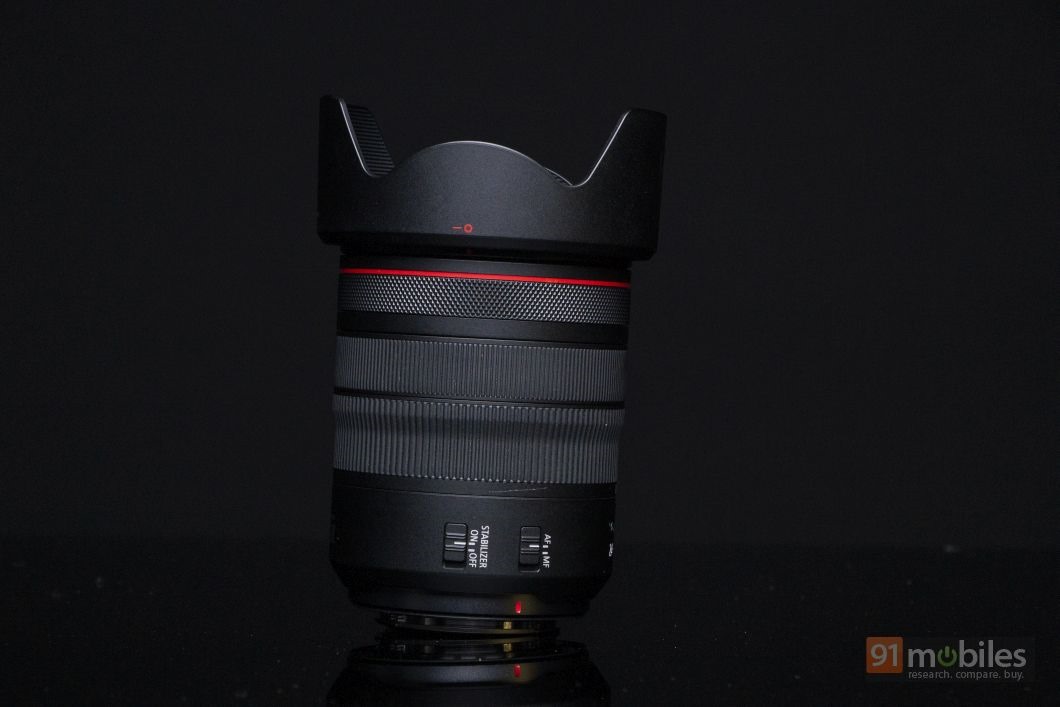 Speaking of lenses, Canon has introduced a new lens system with the EOS R. Dubbed RF mount, the company has mixed things up with this one by having a large 54-mm diameter and a short flange distance of 20mm. The mount also utilises 12 contact pins to offer faster data transmission between the body and lens. Along with the zoom ring and focus ring, the new lenses also come with a Control Ring, allowing you to change ISO or shutter speed, which is quite useful and is also faster than fiddling with buttons. The camera maker has launched a slew of lenses for its mirrorless ecosystem along with an adapter to let consumers use their EF lenses, used with the brand’s DSLRs. The interesting thing is that you can also buy mount adapters with Control Ring or the one with Circular Polarising or Variable Neutral Density filters. The one I received is the 24-105mm kit lens with f/4 aperture.

Enough about specs, how does the Canon EOS R perform in terms of the image quality? Well, it’s a capable shooter that can capture scenarios quite well. I’ve always liked the colour science of Canon’s offerings, and the EOS R is no different. Thanks to dual-pixel autofocus technology, the autofocusing is quite fast too. There’s Eye Tracking AF support as well, which lets the shooter focus on the subject’s pupil, which is handy for portraits. Do keep in mind that it doesn’t work in servo mode.

The long shots have a high level of details and even at the original resolution, noise levels are kept to the minimum. The close-ups are also impressive with faux bokeh effect adding to the charm. Even in dim settings, the EOS R manages to offer good sharpness, although noticeable levels of noise start from ISO 6400 and above.

In the video department, sadly, the 4k videos have a crop factor of 1.7x applied which means that you get a 40.8mm-equivalent shot with the 24mm kit lens resulting in a zoomed-in view. That said, the footage is crisp provided you have a lens that comes with built-in stabilisation considering that the Canon’s shooter misses on that. The full HD clips are slightly better as there’s no crop factor and footage is also smoother.

The Canon EOS R supports the brand’s LP-E6 battery pack which promises to offer up to 400 still images on a single charge. Sadly, I couldn’t test out its capability as I was using a third-party battery. 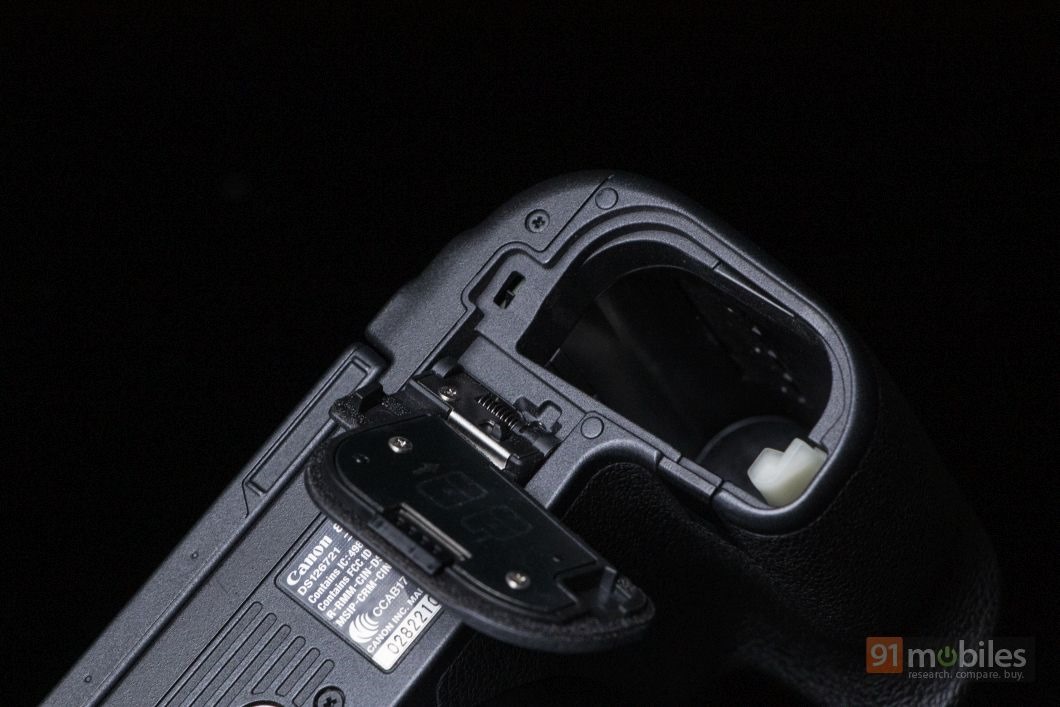 Similar to the previous offerings from Canon, the EOS R can be connected to smartphones via the Camera Connect app.

It’s worth noting that the Canon EOS R is a first-gen offering considering it’s the Japanese brand’s very first mirrorless camera. Yet, the company has ensured that the shooter ticks the most right boxes, be it a good sensor, robust design with customisable controls and of course, a good lens ecosystem to boot. Add to it the competitive price tag of ~Rs 1.5 lakh for its body, and around Rs 2,30,000 with the kit lens, and the EOS R becomes an attractive proposition for a prospective buyer. In fact, the EOS R also signifies the brand’s intent to make a mark in the full-frame mirrorless segment, considering the brand introduced its affordable sibling in the form of the EOS RP recently (stay tuned for its review and to see how it differs from the EOS R).

Having said that, the EOS R isn’t perfect by any means. The lack of in-body image stabilisation will put off many users, while the crop factor applied to videos makes it less compelling for those who want to use it for recording videos. And that’s where Sony’s A7R III has a stronghold. Then there’s Nikon’s Z6 and Z7 (first impressions) in the fray too. Panasonic’s recently-launched Lumix S1 (first impressions) is also quite interesting, though it’s priced slightly on the higher side. Of course, if you don’t want to switch to a mirrorless camera, then you have the option to go for Canon’s own 5D Mark IV. 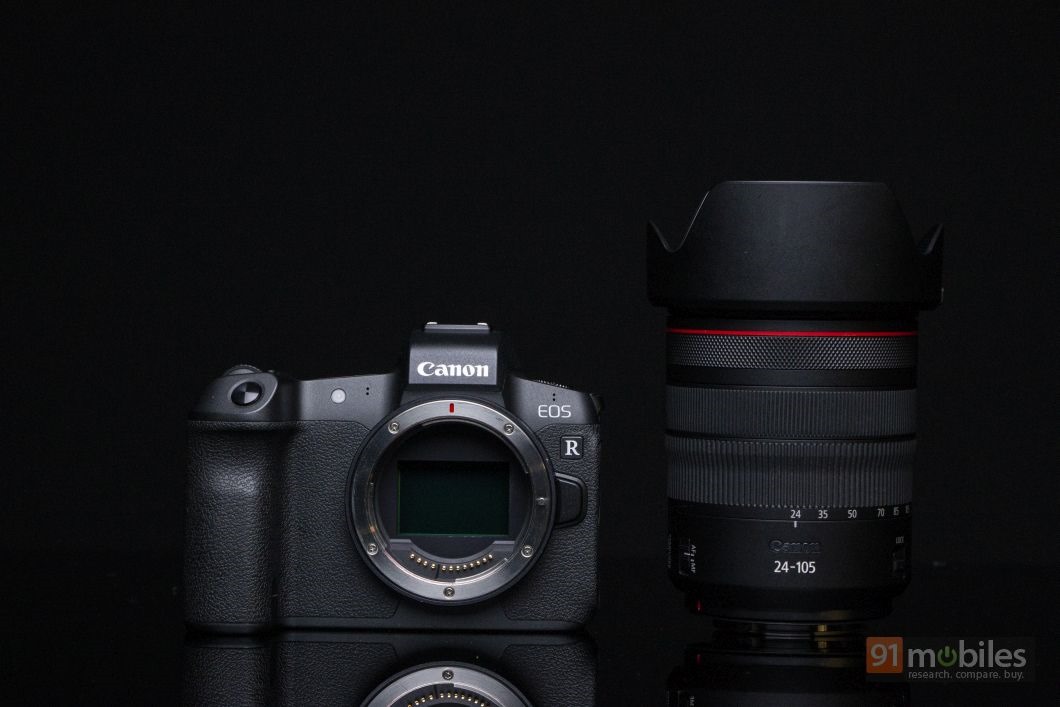 In a nutshell, the Canon EOS R is a solid full-frame mirrorless camera that offers great images, and records impressive full HD videos with the flip-out LCD screen making it a good choice for photographers and vloggers alike. It also becomes a compelling proposition for those who are already invested in the Canon ecosystem.