With the ever-increasing craze for food, travel, casual photography, being active on social media etc, comes a need for a handy shooter for which smartphones suffice. Having replaced point-and-shoots, smartphone cameras help you click anytime, anywhere and allow you to instantly share your life with others. 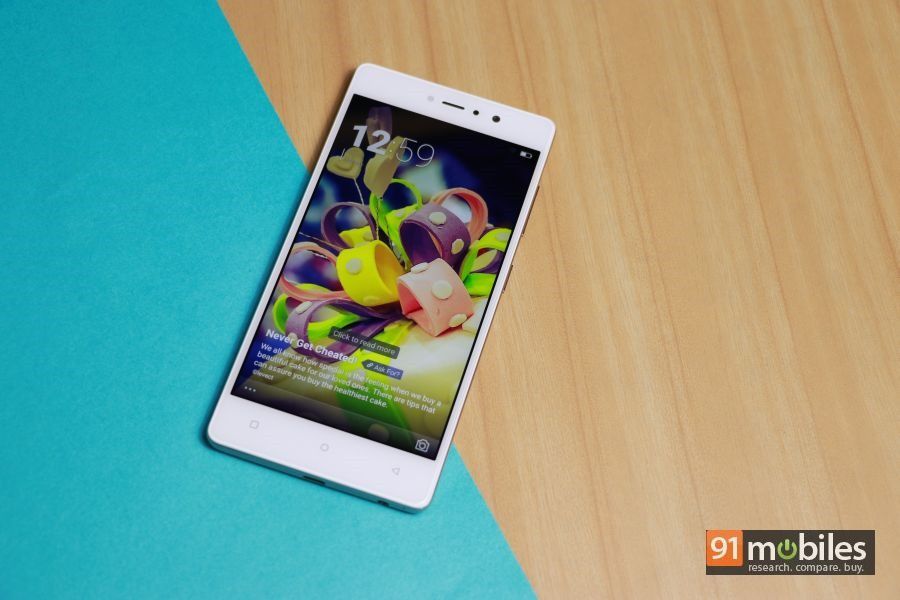 A recent addition to the lot has been the Gionee S6s. A successor to the S6, which was launched in the wake of this year, Gionee S6s takes pride in its 8MP selfie shooter, complemented by an LED flash module. Along with that, the phone offers a metal unibody build and decent specifications, at least on paper. We’ve been using the phone as our primary driver for a while now, and here’s what we think.

Design: Going With The Flow

The Gionee S6s comes in gold and has a unibody full metal design as we mentioned earlier… which means it doesn’t stray too far away from the design of many other phones we’ve seen lately. 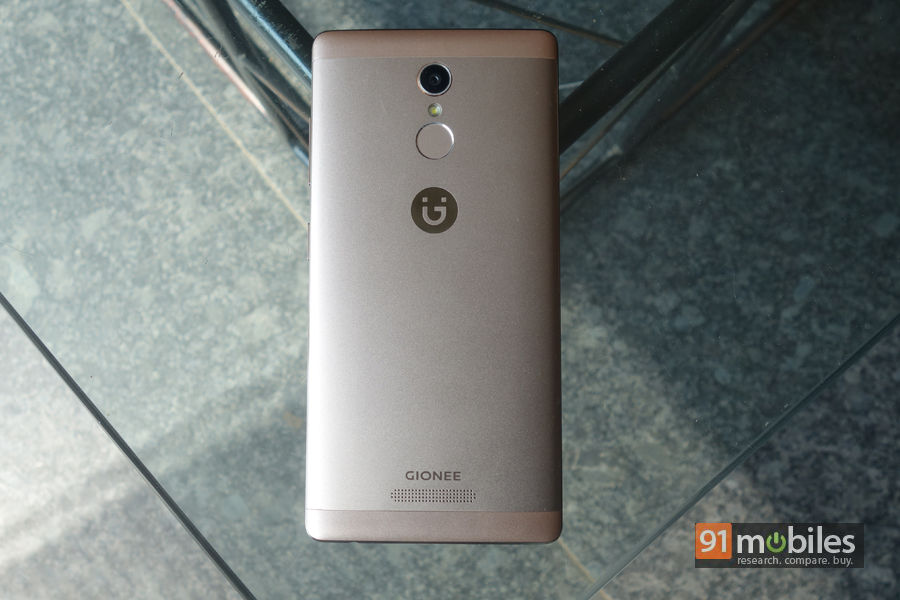 The smartphone doesn’t do anything new in this department and settles with what’s already popular, which is not necessarily a bad thing. It’s a stylish looking phone that won’t make you stand out from the crowd, but rather let you be a part of it. However, there are a few details which got our attention. The copper ring around the primary camera module, which is followed by three more round entities including the flash, fingerprint reader, and Gionee’s branding makes for an eye-catching sight. 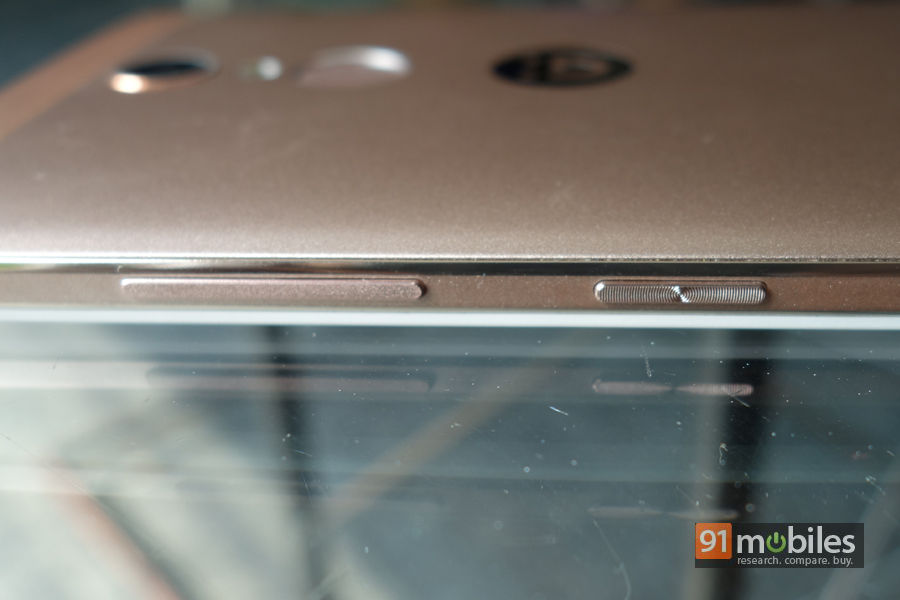 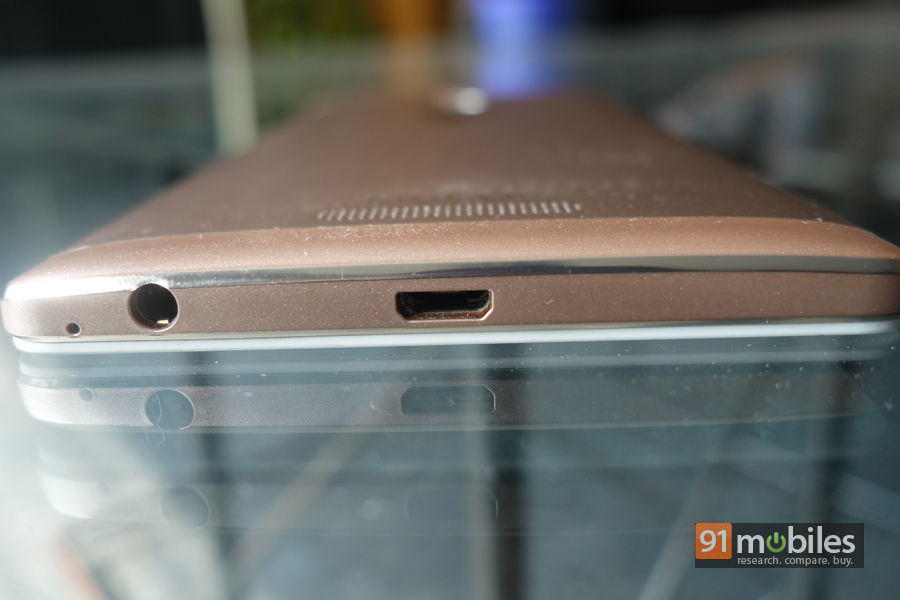 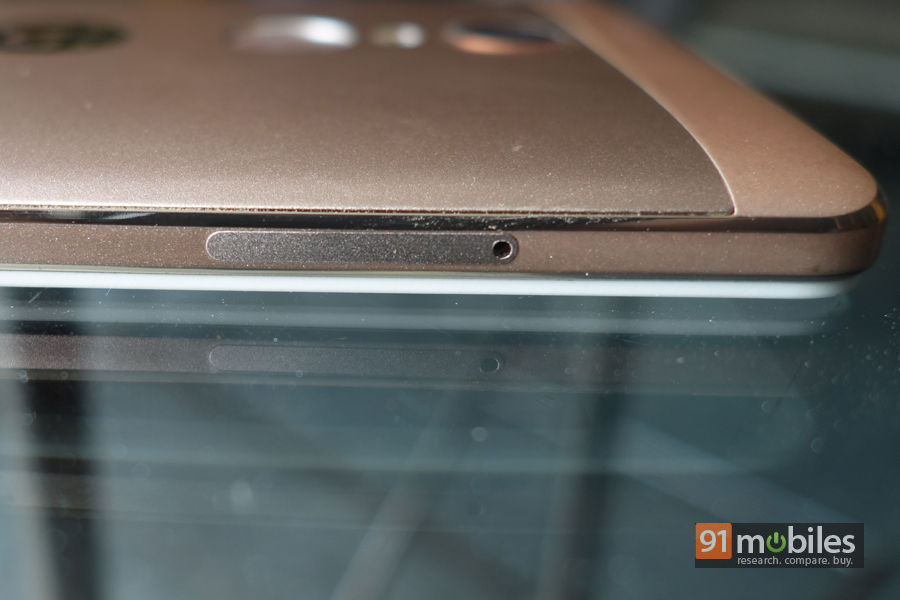 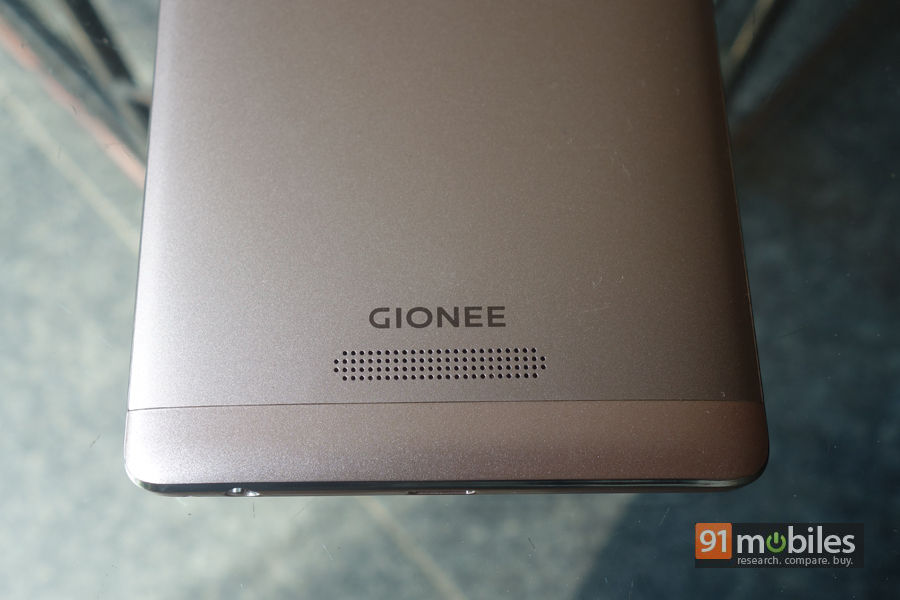 The power key gets concentric circles engraved on it, while the volume key is smooth, helping you easily feel the difference when you’re not looking at the phone and using it. The rest of the port and button placement is usual.

The phone justifies its price tag when it comes to build quality. Despite not being extremely slim, nor too light, the Gionee S6s sits in the hand comfortably. But the slightly slippery back panel is somewhat of an issue. Using the Gionee S6s with a single hand won’t be a piece of cake.

The Gionee S6s uses a 5.5-inch full HD panel with a 2.5D curved glass on top. While spotted in a completely different price segment, 2K displays are no longer a rare sight, and having looked at those, we felt that the sharpness on S6s’ screen was not eye-searing. The colours, however, look good and vivid. The screen brightness was good, both indoors and outdoors. The screen on the phone is not too reflective, so using it under the harsh sun wasn’t an ordeal. Viewing angles were great, and overall, using the Gionee S6s while content consumption was a delight. The screen responds to touch extremely well, too. 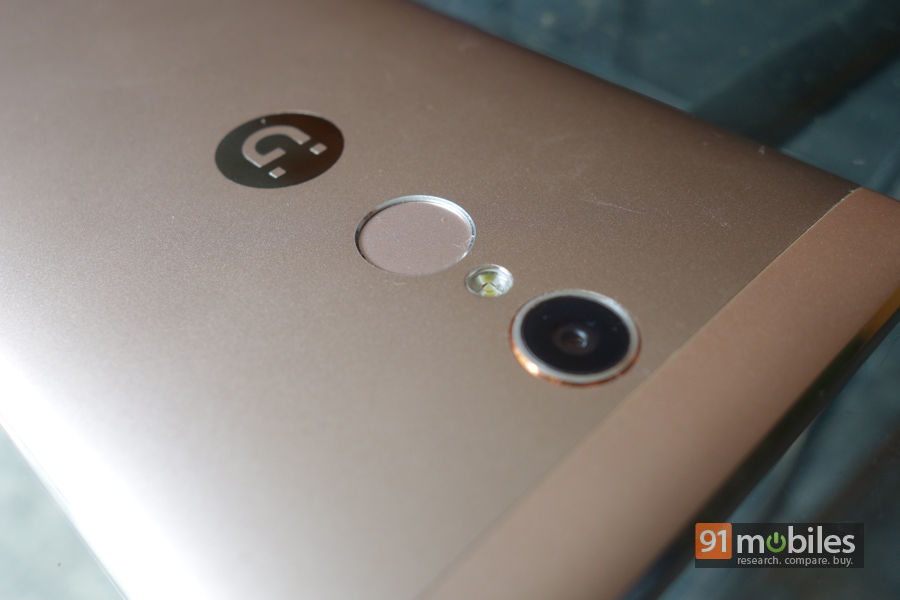 The shooting department is where the Gionee S6s is game for anything. Equipped with a 13MP primary camera, aided by an LED flash, and the 8MP front-camera configuration, the device may not sound like a shooting beast, but it does a fairly decent job. The primary snapper captures great details and colours, with the output looking rich and not dull. However, some lighting situations led to slightly warmer colour reproduction. The camera performs average in low light conditions, while night photography was pretty decent. That said, you should expect some grain. The front camera steals the show with incredibly detailed selfies. However, the Face Beauty 2.0, which is one of the highlights about the phone, leads to gimmicky pictures if not tuned properly. Low light selfies were extremely hazy, but you have a selfie flash at your disposal, with three usage options including flash, steady light, and screen flash, to take care of such situations.

To take an in-depth look at the camera app interface, and the shooting prowess of the Gionee S6s, you may head to our camera review. Meanwhile, here are a couple of pictures clicked with the primary camera of the smartphone. 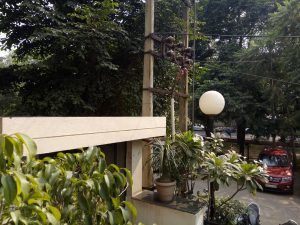 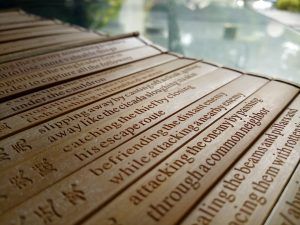 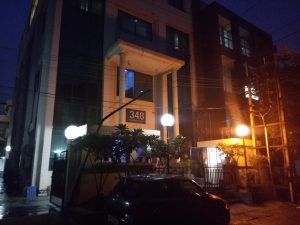 The Gionee S6s runs the company’s own Amigo UI v3.2 on top of Android Marshmallow. Consequently, you don’t find an app drawer, but you do find a tweaked icon pack. 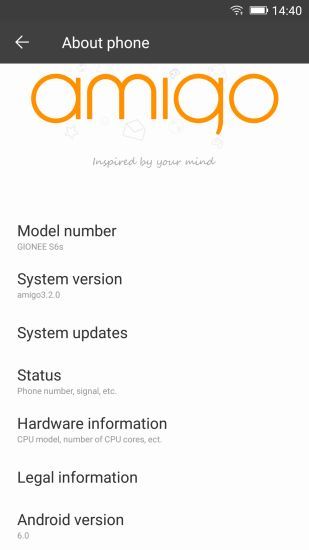 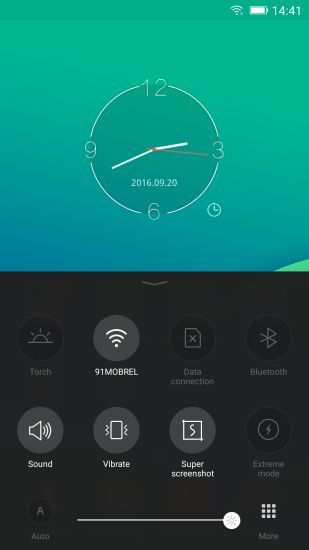 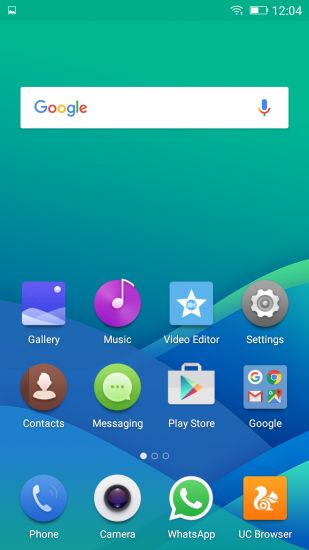 The notification panel can be accessed by using the good old way, however, all the quick settings are revealed by swiping up from the bottom of the display. The UI comes loaded with features and apps. There’s Mood Wallpaper which lets you subscribe to differently themed wallpapers for your lockscreen which then change periodically. Another customisation app is Theme Park. You also find gesture control, allowing you to use either motion or draw certain shapes and letters on the standby screen to access apps or perform other functions. There’s Gionee’s own System Manager to boost your phone’s performance. For a closer look at the user interface of the S6s, you can check out our review of the Gionee Elife E8. 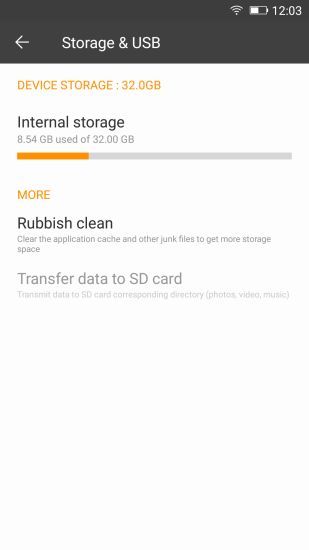 The S6s offers 32GB of inbuilt storage, out of which you get around 26GB for personal use. You may top up the storage up by another 128GB using a microSD card. The phone comes preloaded with quite a few third party applications as well, which include Swiftkey Keyboard, Facebook, Instagram, UC Browser, Hotoday, Messenger, and Truecaller. These apps cannot be uninstalled, which is a little disappointing. The UI operates smoothly, and is a decent upgrade over the Android Lollipop based Amigo UI, however, we feel that the animations are a bit too much, and lead to a slight lag.

Performance and Battery: What Comes With A Decent Daily Driver

The 1.3GHz octa-core MediaTek MT6753 chip in the Gionee S6s might not sound like the most powerful, nut the phone performs well as a daily driver. The SoC is coupled with 3GB of RAM. We didn’t encounter any major lags in everyday use. The phone takes on multitasking easily, as well. However, you might encounter a few stutters in that case. 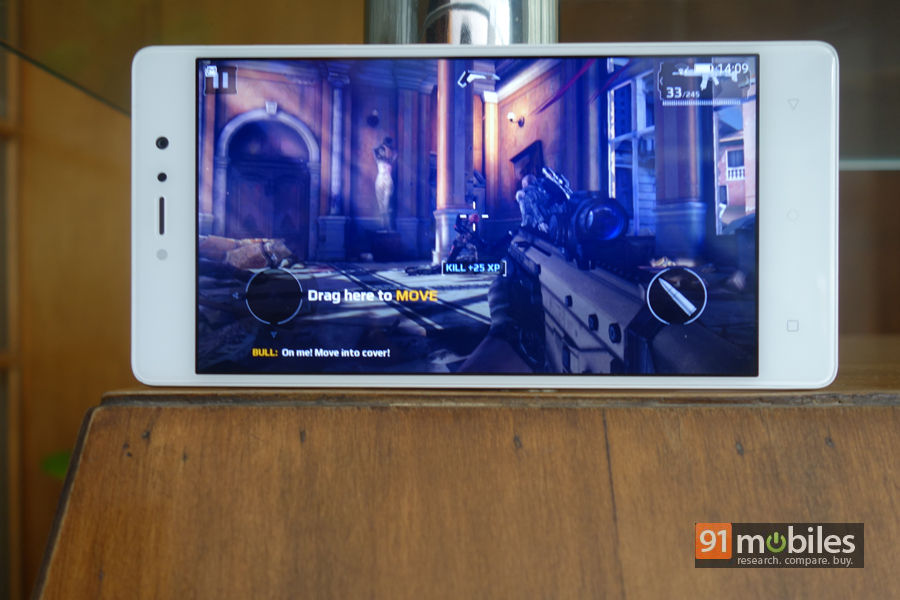 Coming to heavy usage, we played titles like Asphalt 8: Airborn and Modern Combat 5: Blackout and the phone handled the gaming like a pro, with no visible lags during the initial few minutes. Around 30 to 40 minutes into the game, we did encounter some jitters and frame drops. The Gionee S6s starts heating up as well, to noticeable but not uncomfortable levels.

Call quality on the phone was decent, but we did experience network reception issues in certain areas. The loudspeaker output was average, and the placement of the grille on the back leads to muffled sound in certain positions. The bundled earphones ship with silicon buds, which are comfortable to wear for longer periods of time at a stretch. The output was decent with good mids, perfect for listening to tracks like Kala Chashma, not so perfect if you listen to bands like, say Porcupine Tree.

The S6s is a 4G VoLTE enable phone with hybrid dual-SIM slots, and offers other standard connectivity options like Wi-Fi a/b/g/n, Bluetooth v4.0, and micro-USB slot with USB OTG capabilities.

The Gionee S6s is powered by a 3,150mAh battery, which is non-removable. With mixed use, the phone easily delivers a day of use, with some battery still spare for you to not get paranoid the next day, reach your work calmly, and charge the device. On our standard battery test, the Gionee S6s lasted for a little over 12 hours and 45 minutes, which we consider as a good result. The screen-on time was around three and a half hours. That said, the standby time offered by the smartphone is not as impressive. To help you avoid battery crisis, the Gionee S6s offers a Power Saving mode and an Extreme Power Saving mode. With the 2A rated bundled charger, the Gionee S6s takes a little over two and a half hours to charge fully. 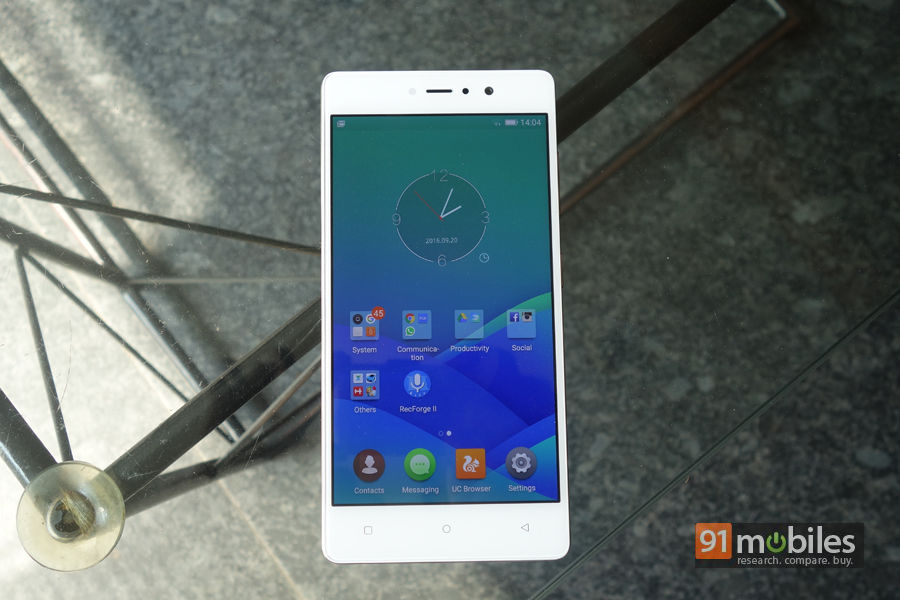 The Gionee S6s offers decent design and a good display. You also get a nice pair of shooters, with the selfie cam playing the star of the show. The battery backup on offer is adequate, and the performance should suffice most users unless you intend to use the phone purely for high-end gaming.

At its price, which is Rs 17,999, the Gionee S6s faces stiff competition from the recently launched OPPO F1s (review), which is a selfie-centric phone and sports a whopping 16MP front camera for a similar price. However, the OPPO F1s does not feature a front-facing LED flash. Talking just about the specs, we find more sense in placing the S6s against the likes of the Lenovo ZUK Z1 (review), and the Moto G4 Plus (review), all of which are decently loaded phones with good cameras, and offer comparable specifications. Or if you need a performance beast, the newly launched Lenovo Z2 Plus (first impressions) should definitely be on the top of your list.