Lenovo is a fairly reliable and successful brand when it comes to the consumer and enterprise laptop segments. As for its ‘Legion’ gaming brand, it might not be very popular in India, but it has some really good products. The Legion 5 Pro series has been one of the best gaming laptops last year and this year we have a successor. The new Legion 5i Pro is powered by the latest 12th-gen Intel Core processors paired with Nvidia’s RTX 30-series graphics card and a 16-inch 2K display with high refresh rate.

Does the new Legion 5i Pro live up to its predecessor and is it worth the money? Let’s find out. 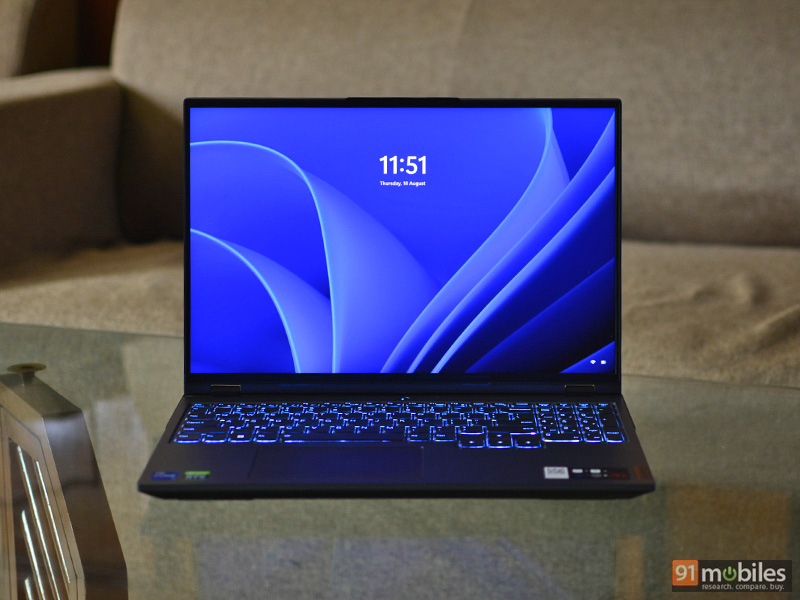 The Legion series has been following an industrial design philosophy with dark grey aesthetics with a rigid chassis made out of aluminium and magnesium. I am not a big fan of the ‘Storm Grey’ finish, but that’s just a personal choice. The only noticeable change in the design is the lid. It now comes with the Legion branding logo instead of just the ‘Y’ logo, which honestly looks cleaner and a lot more appealing. 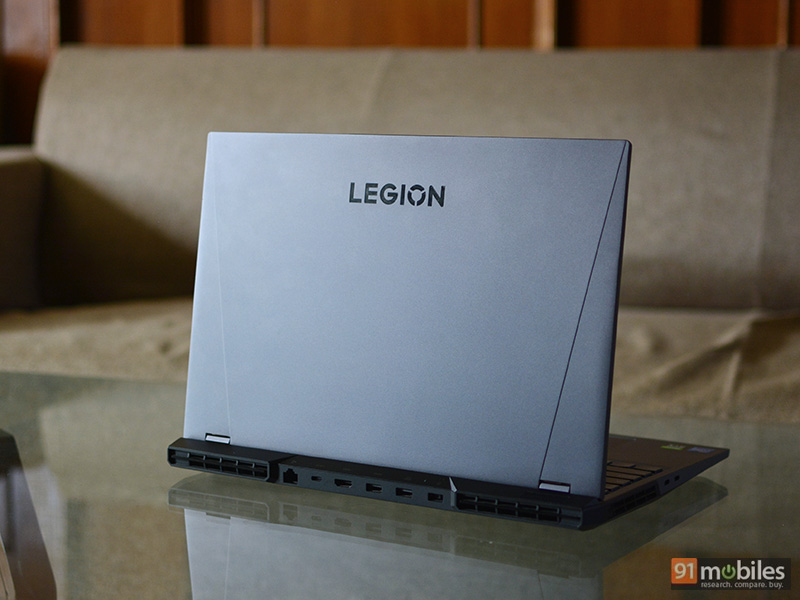 Everything else seems to be similar to the last-gen model. The overall construction feels really good with very minor flex on the lid and keyboard deck. The corners and edges have a nice finish to them and don’t feel sharp while using the laptop. Even the hinge is well implemented as I didn’t face any screen wobbling. There’s also a protruding lip on the top of the display that allows you to open the laptop with just your fingers.

The size and dimensions are the same as last year with the laptop weighing 2.5kgs. The 300W charger brings the total to 3.6kgs which doesn’t make it ideal to carry around for long durations. Having said that, this is something that is expected from a gaming laptop of this calibre. 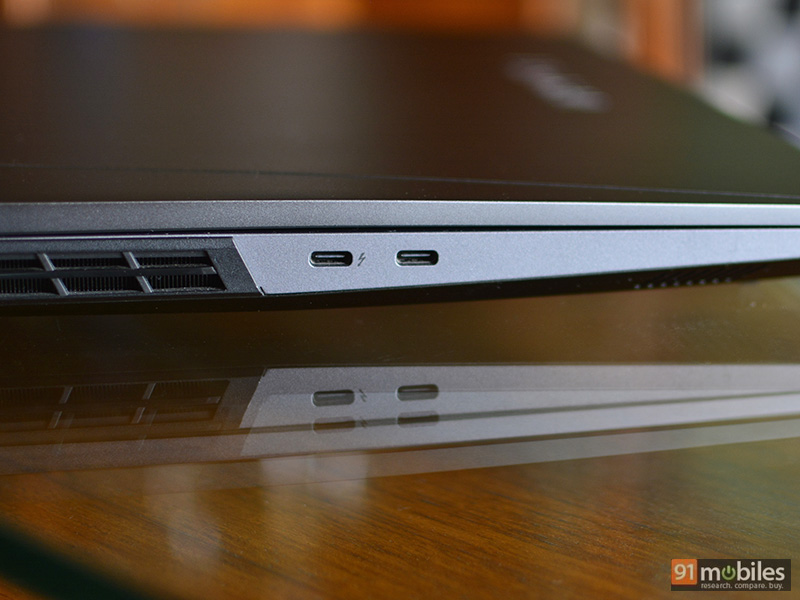 The laptop features a healthy set of I/O. There is a USB-C 3.2 Gen 2 (DisplayPort 1.4) port and a Thunderbolt 4 (USB4 and DisplayPort 1.4) port on the left. On the other side, there is a USB 3.2 Gen 1 Type-A port, a 3.5mm combo audio jack and a webcam toggle switch. There are additional ports at the rear including two USB 3.2 Gen 1 Type-A ports, HDMI, Ethernet (RJ-45), USB-C 3.2 Gen 2 (DisplayPort 1.4 and power delivery) and the charging DC-in port. The laptop supports USB-PD so can charge it using a standard charger, though you might get slower charging speeds. There are air vents on the sides and at the rear while the bottom has additional cutout slits to pull in more air. There are also some thick rubber feet at the bottom that offer good grip especially when the laptop is being used on a smooth desk surface. 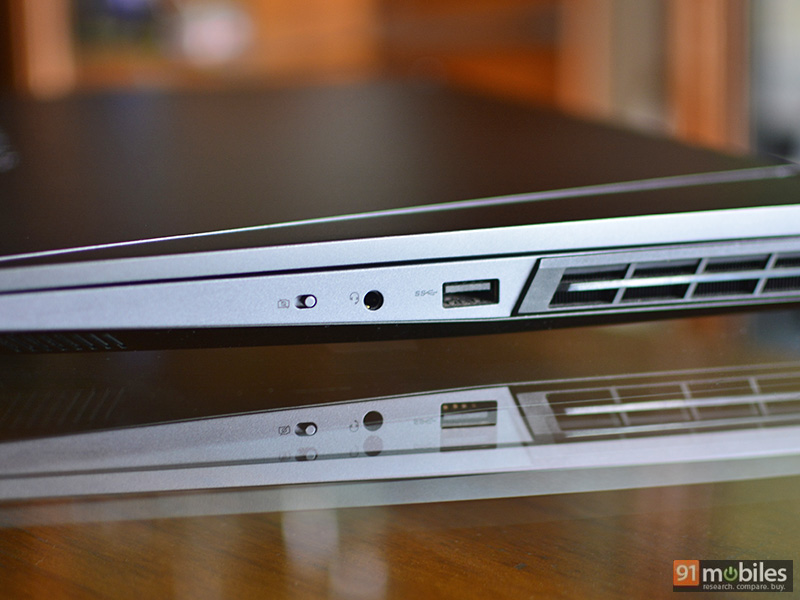 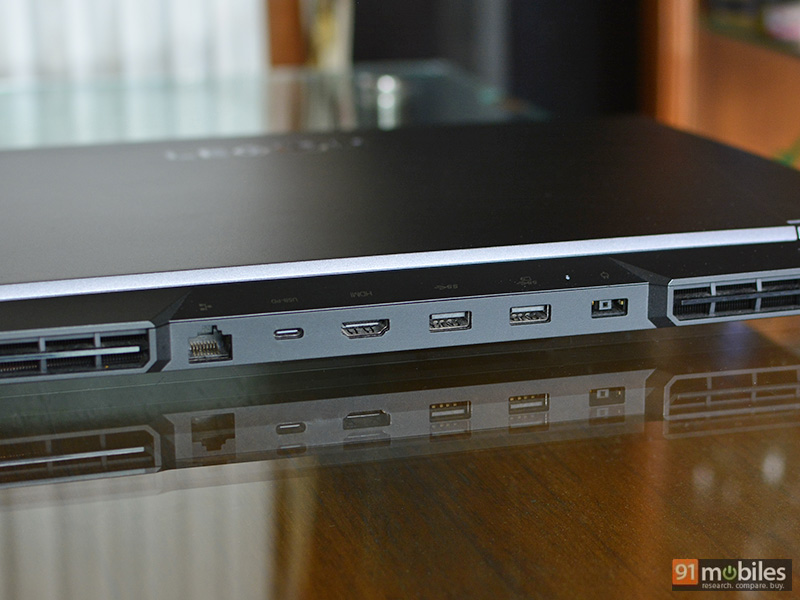 Removing the bottom panel is slightly tricky as the clips are clamped on tightly. Nevertheless, I managed to get in and got access to the dual M.2-based SSD storage drives and the memory DIMMs, both of which are nicely protected under a metal casing. One can also replace the Wi-Fi module and the battery. The cooling unit is nice big with four heat pipes and two cooling fans. 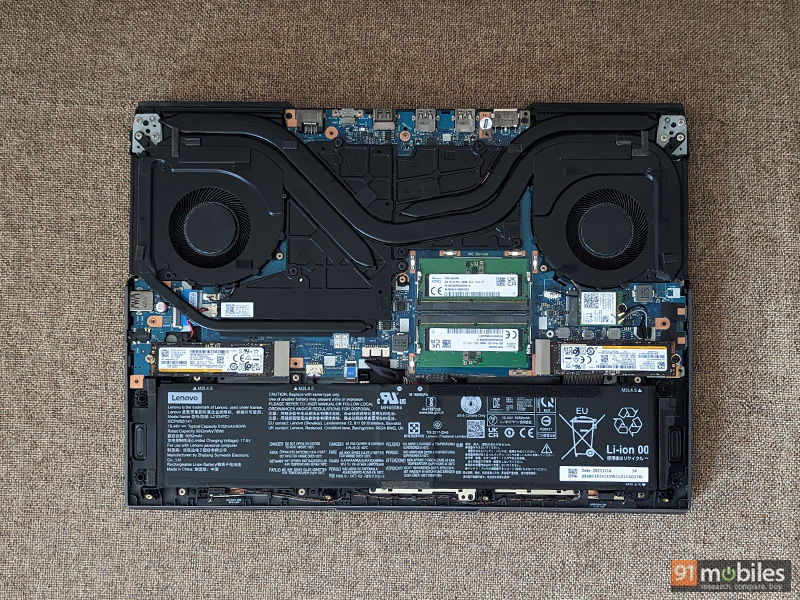 Having a good display is crucial and Lenovo hasn’t cut any corners here. You get a 16-inch 16:10 display with a QHD+ (2,560 x 1,600-pixels) resolution. The IPS panel performs really well and comes with an anti-glare matte finish, 165Hz refresh rate, 500 nits of brightness with HDR 400, Dolby Vision, and G-Sync. 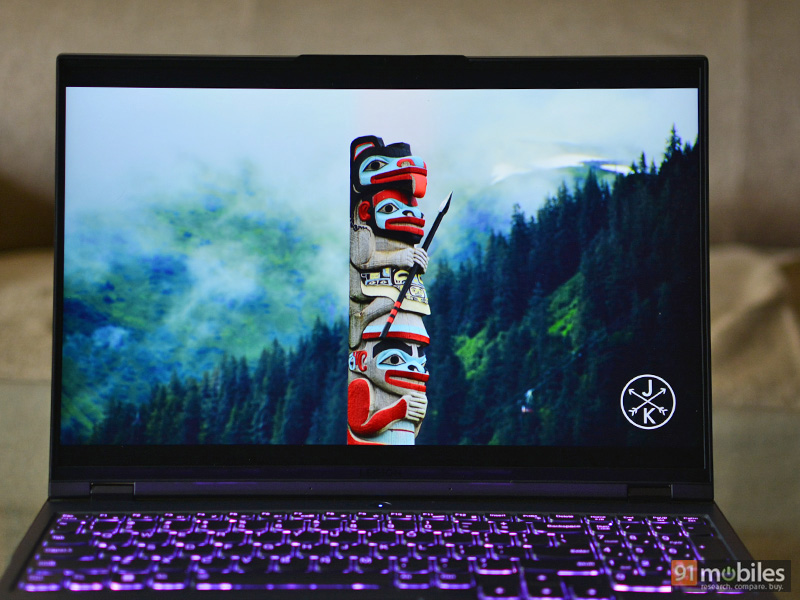 It offers ample brightness and in terms of colour, it supports 99 percent sRGB, 77 percent Adobe RGB, and 77 percent DCI- P3. You might find slightly better displays out there with better colour reproduction, but for its price, I doubt gamers are going to find any fault with this one. There is scope for content creation as well, so you should be good if you have to edit photos or videos now and then. The laptop also comes with X-Rite Color Assistant which quickly allows you to switch between colour profiles.

The display is also quite responsive and one of the best in its class which means you can expect precise and accurate aiming especially while playing fast-paced shooters. Enabling Overdrive from the Lenovo Vantage software further improves timings, thus making it one of the best displays on a gaming laptop I have reviewed so far.

Lenovo offers one of the best keyboards on its laptops, and the same is the case with its gaming range. The ‘TrueStrike’ keys on the Legion 5i Pro are large with a travel distance of 1.5mm and I was quickly able to adapt to them. They definitely offer a very comfortable typing experience, especially if you have to type for long durations. I also appreciate Lenovo giving extra space for the arrow keys. Lenovo has also squeezed in a dedicated numeric keypad, though the keys are a bit narrow compared to the rest of the keyboard. 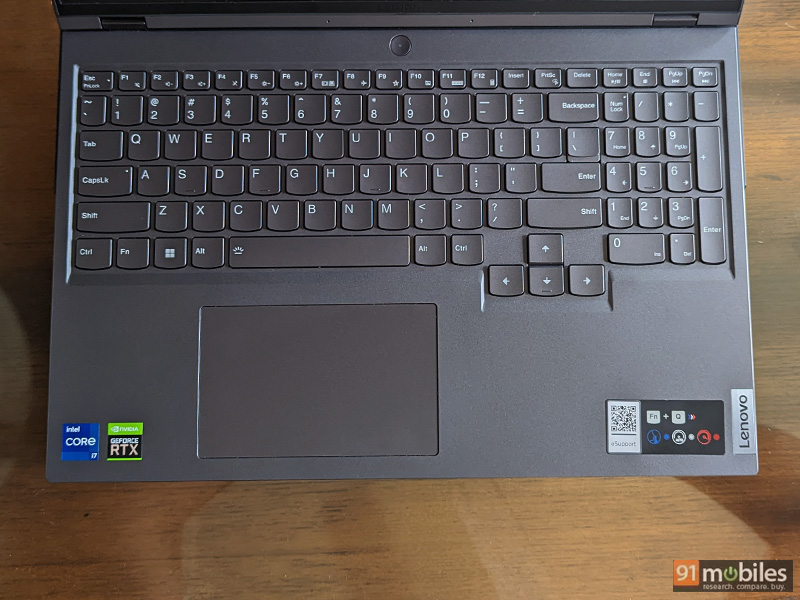 There is RGB backlighting on the keyboard, but sadly it is limited to a 4-zone illumination instead of per-key, hence customisation options are limited. Even the brightness is limited to just two steps. If you are someone who cares about RGB, don’t have a lot of hopes here.

As for the trackpad, it is large and doesn’t include dedicated left and right buttons, but overall I had a responsive experience.

The Legion 5i Pro comes with Windows 11 Home and there is some Lenovo-branded preinstalled software, but it isn’t overcrowded with bloatware. The Lenovo Vantage is probably the most important tool as it allows you to tinker with various settings like switching between performance modes, controlling the iGPU and discrete GPU, setting macros, and much more. What I love about Lenovo gaming laptops is that they offer a quick key combo to switch between performance modes. Pressing the Fn and Q keys lets you choose the right mode you need and it is denoted by the LED on the power button- blue indicates silent mode, white is for balanced and red means high-end performance. Lenovo even denotes this shortcut with a sticker on the keyboard. 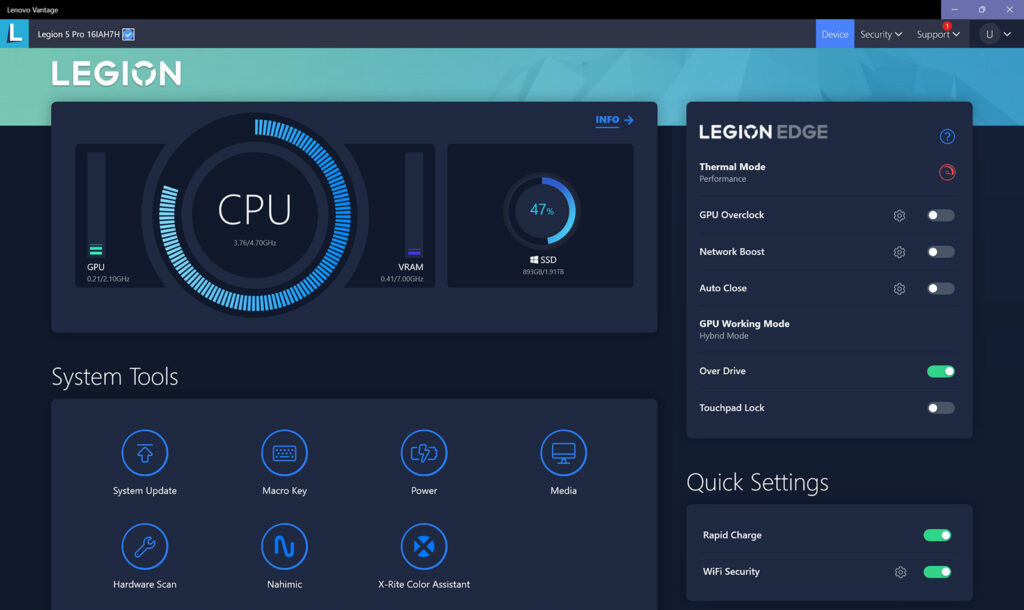 The Legion 5i Pro is powered by the 12th-gen Alder-Lake Intel Core processors. While there are various SKUs, in India there is only one model that comes with the Core i7-12700H. This processor has a total of 14 cores with six performance cores, eight efficiency cores and 20-threads. The P-cores can clock up to 4.7GHz while the E-cores can go up to 3.5GHz. Depending on the implementation, this CPU can draw up to 115W. Paired with the CPU is the Intel Iris Xe graphics capable of clocking at 1.40 GHz. There’s 16GB of dual-channel DDR5 4800MHz RAM and an Nvidia GeForce RTX 3060 with 6GB GDDR6 memory.

For storage there is a 1TB M.2 PCIe Gen 4 SSD, though the unit that I received included two identical drives. As per the model number, the drive is the Samsung MZVL21T0HCLR which is listed to offer 7,000MBps sequential read speeds and 5,100MBps sequential write speeds. Thanks to the RAID0 configuration, expect read speeds of up to 12,000MBps and 4,200MBps write speeds as was confirmed by CrystalDiskMark and ATTO Disk benchmarks.

The laptop is excellent when it comes to performance, be it casual work or gaming. My daily workload involved editing images on Adobe Photoshop, opening about 20 Chrome tabs, using Slack and Discord, and watching YouTube or listening to music from time to time. I had zero hiccups during the testing period and was very pleased with the overall experience. The Core i7-12700H is a cracker of a CPU and can handle almost anything thrown at it. Apart from gaming, the CPU is great for rendering purposes as well. In fact, the performance outmatched the recently launched Alienware X15 that comes with a more powerful Core i9-12900H, although it is a very slim machine compared to this one. One also needs to note that Intel’s Alder Lake series is power-hungry and generates a lot of heat, but that’s a trade-off if you care about raw performance. It is notable that while the CPU is capable of going up to 115W, it mostly peaked at 45W and up to 90W when running CPU stress tests. This brings me to thermal performance. The cooling system includes updated fans and an additional heat pipe compared to last year’s model and it seems that it was well worth it. Idle temperatures stayed below 40 degrees on both the CPU and GPU, which in itself is respectable. The internals can get really hot under heavy loads as I recorded the CPU hitting peak temperatures of 100 degrees during a stress test, though you should expect CPU and GPU temperatures to sustain around the mid-80-degrees mark. The good thing is that the surface temperature is not very high, which is crucial during long gaming sessions. I also noticed throttling on two of the P-cores during a Cinebench R23 test run. While that might be a concern for some, it was only prominent during heavy rendering operations and there was no visible drop in performance.

Gaming performance is also excellent and the laptop managed to handle games rather well despite having just an RTX 3060. At its native resolution of 2560×1600, I was getting over 80fps in Rise of the Tomb Raider and over 70fps in Horizon Zero Dawn at the highest graphics settings. Enabling DLSS makes things even better with an improvement of 10-15 fps on Horizon Zero Dawn and close to 15-20fps on Marvel’s Spider-Man Remastered. Pulling down the resolution to 1,920 x 1,200 can up your frame rates by anything from 20 to 40 percent.

I would also like to briefly touch upon other performance aspects of the laptop. First, we have the webcam. It is a 720p resolution camera, and the performance is mediocre and I really wish Lenovo would improve on this. The dual speakers are placed at the bottom and while they are backed up by Nahimic Audio processing, they sound pretty average with a tiny bit of bass and low volume levels.

The Legion 5i Pro comes with an 80Whr battery which is a fairly decent size. However, it isn’t as efficient as some gaming laptops in similar price range running on AMD. Expect anywhere between 3 to 3.5-hours of battery life on a day-to-day usage basis. In a video loop test with the brightness set to about 50%, the laptop managed to stay on for 6 hours.

There are some software optimisations that you can enable or disable from the Vantage software. For instance, there is the option to enable Rapid Charge, which allows you to charge your battery faster, or enable conservation mode which charges it at regular speeds to ensure the best battery health. One can also switch between the different iGPU modes to reduce power consumption. 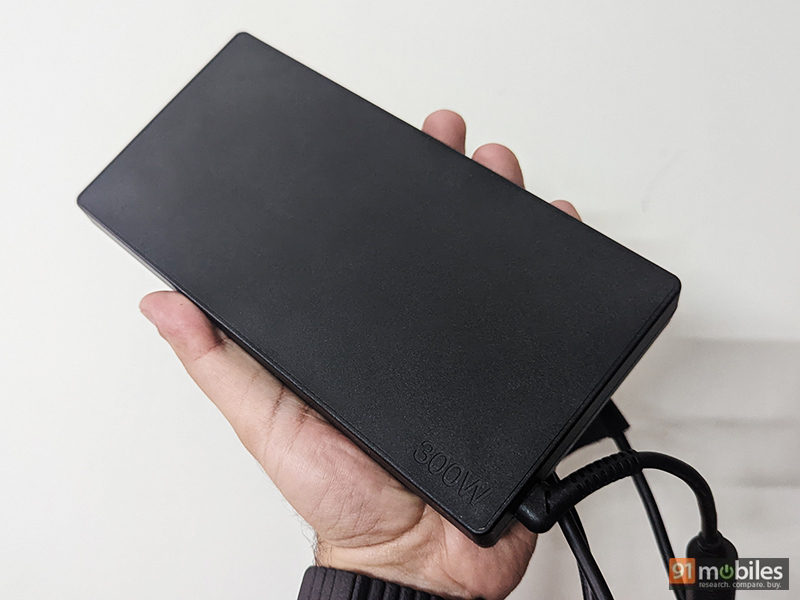 As for the charging brick, it is a large 300W unit that is heavy to carry around. It is a necessary evil, as the CPU and GPU both require a lot of power to deliver the best performance.

The Legion 5i Pro from last year was an excellent laptop and this year it has only gotten better. The improvements might be minor, but the new Legion 5i Pro is definitely one of the top recommended gaming laptops for 2022.

The combination of Intel’s latest processor and Nvidia’s RTX 3060 GPU ensure the best performance and high-quality graphics experience. The display is bright, crisp and super responsive while gaming. Even the design, although a bit dull, is very solid and should last its lifetime without any issues. The laptop is also loaded with a respectable set of I/O ports and the keyboard is a joy to type on. It also gets marks for serviceability, though the bottom panel is a bit tricky to open. The only concern that one might have is the battery life, as some AMD-based counterparts are definitely more efficient. Other small nitpicks include a below-average webcam and the lack of any biometrics for secure login.