Having used Microsoft’s Surface Book 2 (13.5-inch model) for a little over a week, I can confidently say that it is the best 2-in-1 machine in the market. In fact, the Surface Book 2 (first impressions) is the only product which came eerily close to receiving the 5/5 rating after I put it through its paces. Although the laptop’s MRP isn’t for the faint of the heart, if you can stomach the Surface Book 2’s premium price tag, then by all means, go for it as the machine will not disappoint you. That’s pretty much the gist of my review of the machine. However, If you’d like to dive into the nitty-gritty of things and know why I’m all praise for Microsoft’s latest 2-in-1, then read on.

Microsoft’s latest entrant doesn’t do a whole lot to differentiate itself from its predecessor and for good reason. The company nailed the design with its first-gen model and consequently, the Surface Book 2 is a thing of beauty. Quite frankly, I’m so enamoured by the machine’s design that I could run out of adjectives complimenting the Book 2’s aesthetics. It’s unlike any other Windows machine I’ve laid my sights on and the laptop features a distinctive look which is top-drawer, to say the least. It’s not the heaviest or even the slimmest in the market but the laptop’s unparalleled build quality and its stunning design more than make up for it. 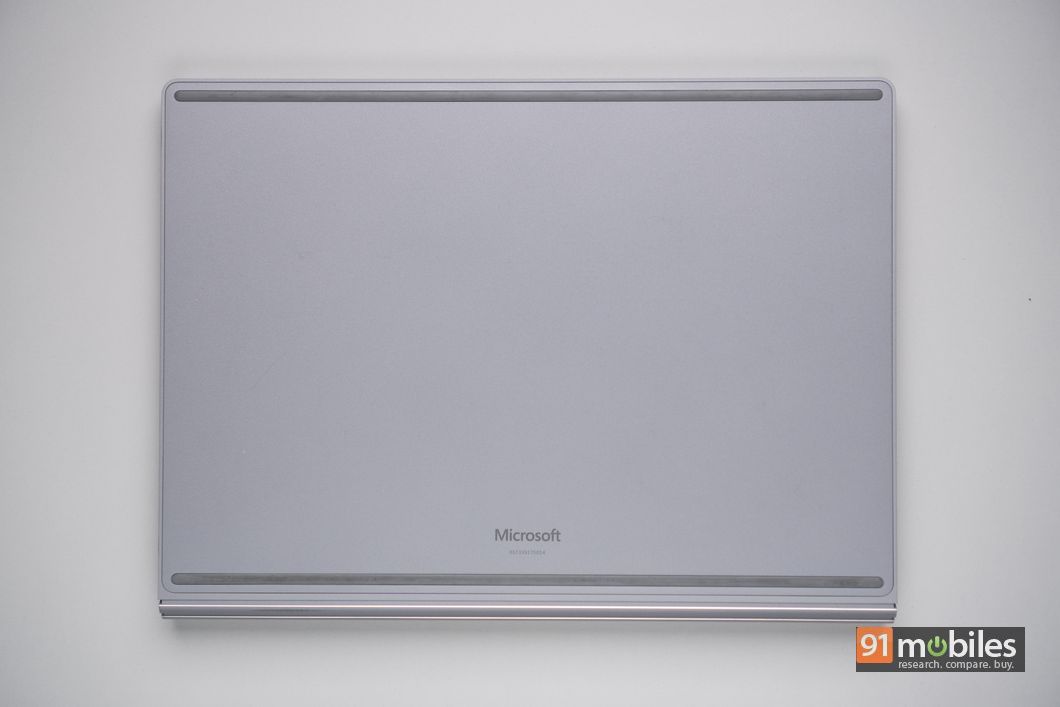 Speaking of which, the machine has been constructed in entirety using magnesium which feels pleasing to the eye and to the touch. Correspondingly, there’s absolutely zero flex in and around the laptop’s base or even the display for that matter. That said, a trade-off of the laptop’s unibody construction is that you cannot pry it open to upgrade the innards. As a matter of fact, teardown masters at iFixIt gave the Surface Book 2 a lowly score of just 1 / 10 in their reparability scale. Therefore, I’ll recommend you handle the machine with utmost care. 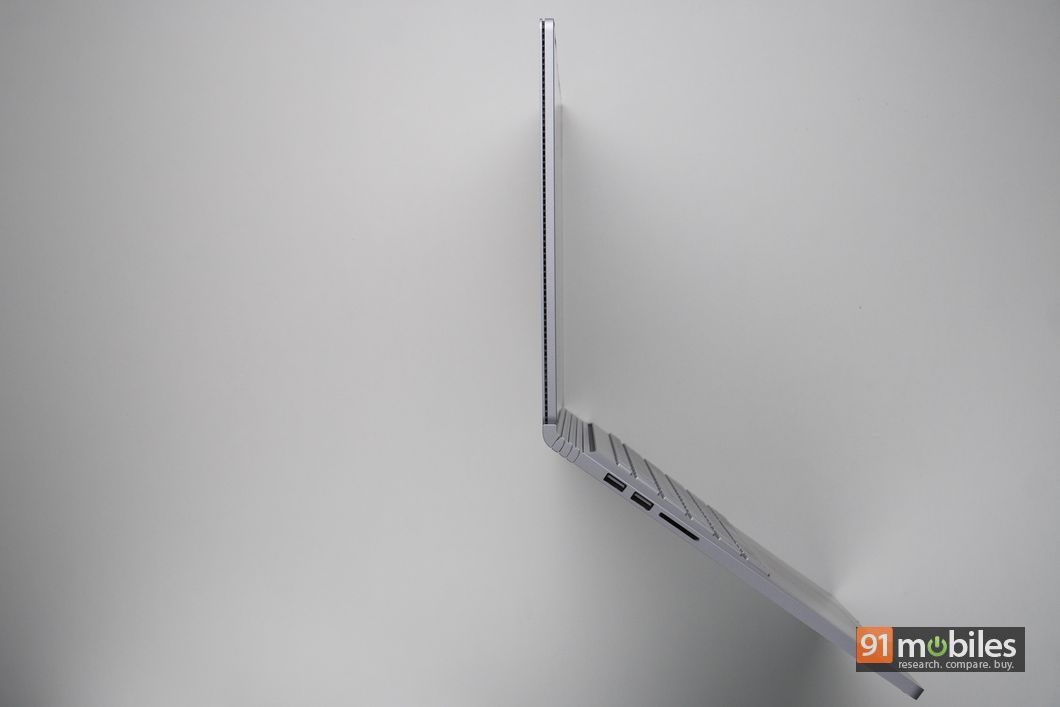 Barring the upgradability issues, Microsoft has done a fantastic job with the design of the Surface Book 2. However, what separates the machine from the herd of other 2-in-1’s in the market is its unique fulcrum hinge mechanism. Unlike most other convertibles, Microsoft allows buyers to detach the display from the laptop’s keyboard and use it as a stand alone tablet with literally a press of a button. To achieve this, the company stuffed most of the core components of the machine including the RAM and the processor inside the Book 2’s display, which is nothing short of an engineering marvel. The panel can be unhooked by pressing the detach button on the keyboard and it snaps back effortlessly for when you want to use the keyboard or harness the power of the dedicated GPU. 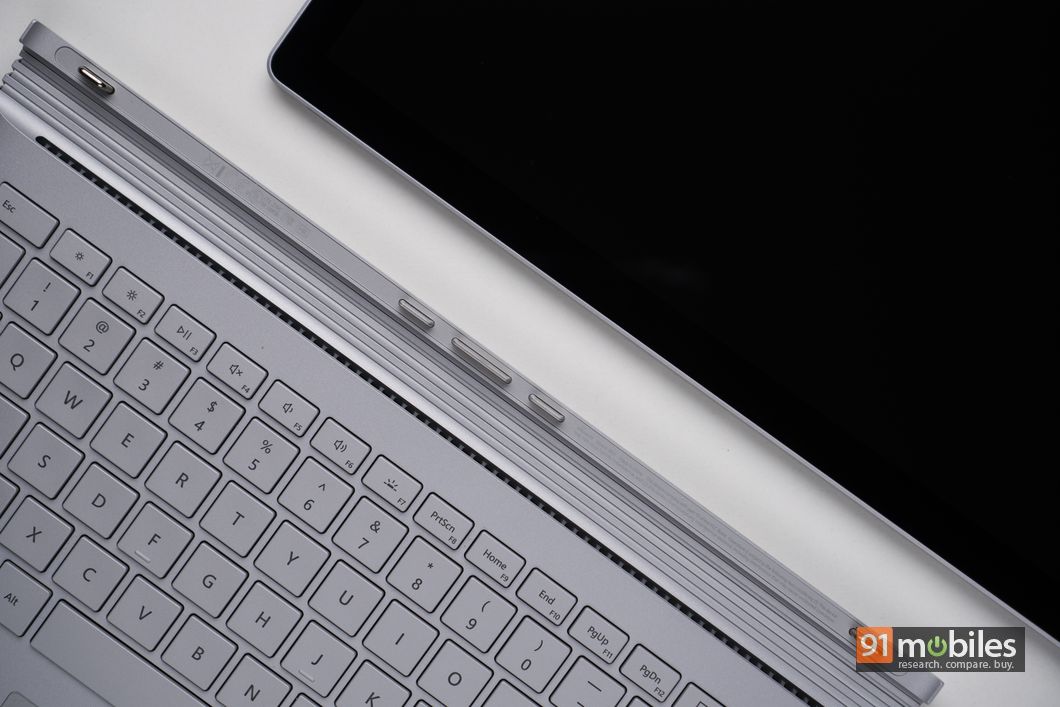 During my time with the device, I didn’t come across any issues with Book 2’s unique hinge. The mechanism provided adequate friction and ensured that the display didn’t wobble when I was tapping the touch panel in laptop mode. Moreover, once attached, I couldn’t get the display to unhook by force and could comfortably lift the laptop up by holding the edges of the display. My only qualm with the hinge’s design is that it leaves a gap when the laptop’s lid is closed, leaving a ton of room for dust particulates to get in.

As for the ports, the company has furnished the Surface Book 2 with two USB Type-A 3.1 ports, a USB Type-C 3.1 port, a full-sized SD card reader and a headphone jack which has been positioned towards the right-hand fascia of the display. Unfortunately, the machine doesn’t ship with a Thunderbolt port and therefore, you won’t be able to connect external GPU enclosures to the device. That’s a huge bummer and it leaves buyers with absolutely no flexibility down the line. On the flip side, the laptop ships with a 5MP 1080p webcam with IR sensors to facilitate Windows Hello. During my testing, I relied solely on the laptop’s facial recognition for security as it was fast, secure and extremely accurate. You’ll also get an 8MP shooter towards the back of the unit, which is the first I’ve seen on any 2-in-1. I didn’t find much use for it during my testing, but I suppose professionals with a creative bent could use it to take pictures without having to take out their smartphones when they’re out and about. 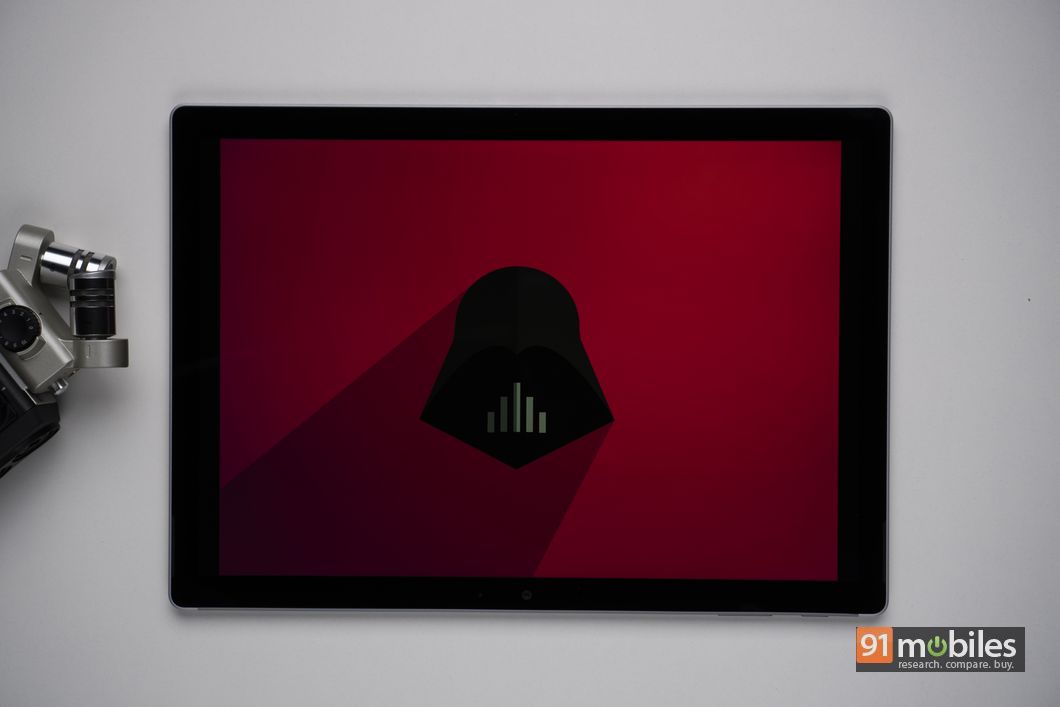 My review unit of the Surface Book 2 shipped with a 13.5-inch, PixelSense display with a resolution of 3,000 x 2,000 pixels. However, if you want a bit more screen real estate, then the Surface Book 2 also comes in a 15-inch display size. As for the quality of the panel, it’s about as good as it gets on a portable device. The colours felt vibrant and punchy, the peak brightness level of the display was satisfactory and the panel exhibited a contrast ratio of 1600:1, which is fantastic. There’s also support for HDR video playback on the latest machine, which works with certain store-downloaded applications like Netflix and Hulu. Furthermore, I was pleased with the display’s touch responsiveness too, and functions like pinch to zoom worked flawlessly on the unit. On the downside, the laptop’s display is bordered by rather chunky bezels which take away from the media consumption experience. Moreover, the panel is quite reflective too, so you might face some issues while using the Book 2 in a well-lit environment.

My work requires me to type long-form articles on various gadgets and therefore, I never compromise on a laptop’s keyboard. To that extent, Microsoft’s Surface Book 2 has an excellent keyboard, which compelled me to type more during my time with the machine. The keys have been spaciously laid out, the palm rest has chamfered edges so that it doesn’t bite the wrist, the keys offer adequate travel and the buttons don’t feel wobbly either. What’s more, you even get a backlit LED with the unit with three different brightness levels, allowing you to type efficiently at night. 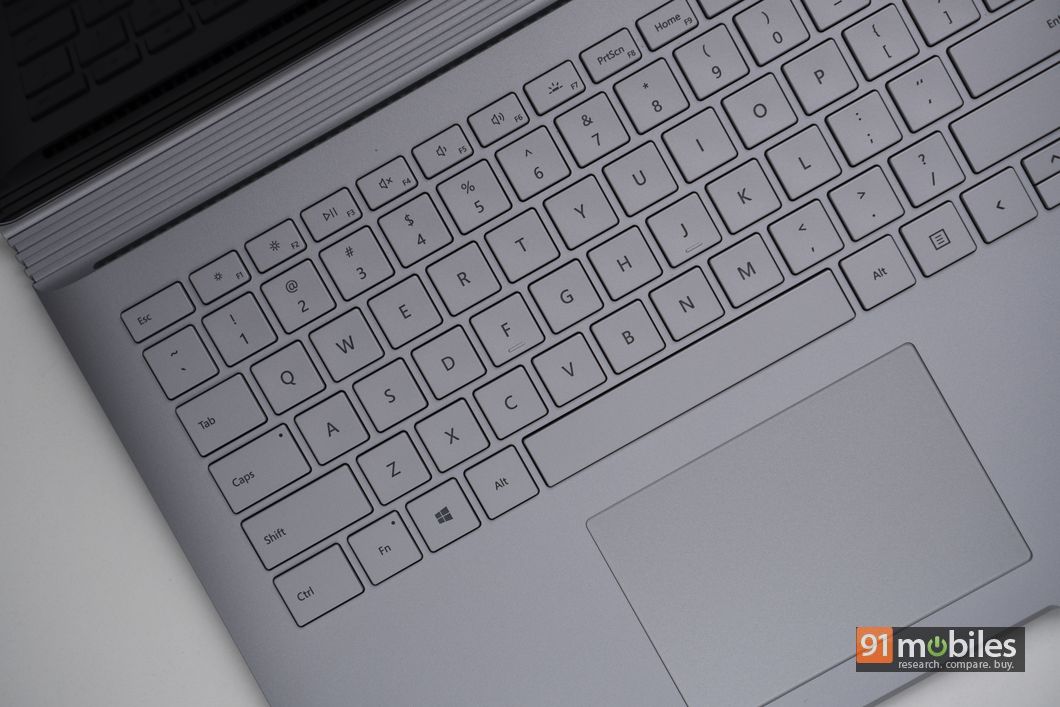 As for the trackpad, it’s every bit as awesome as the laptop’s keyboard, if not more. The trackpad is ginormous and is backed by windows precision drivers meaning multi-finger gestures are rendered precisely. 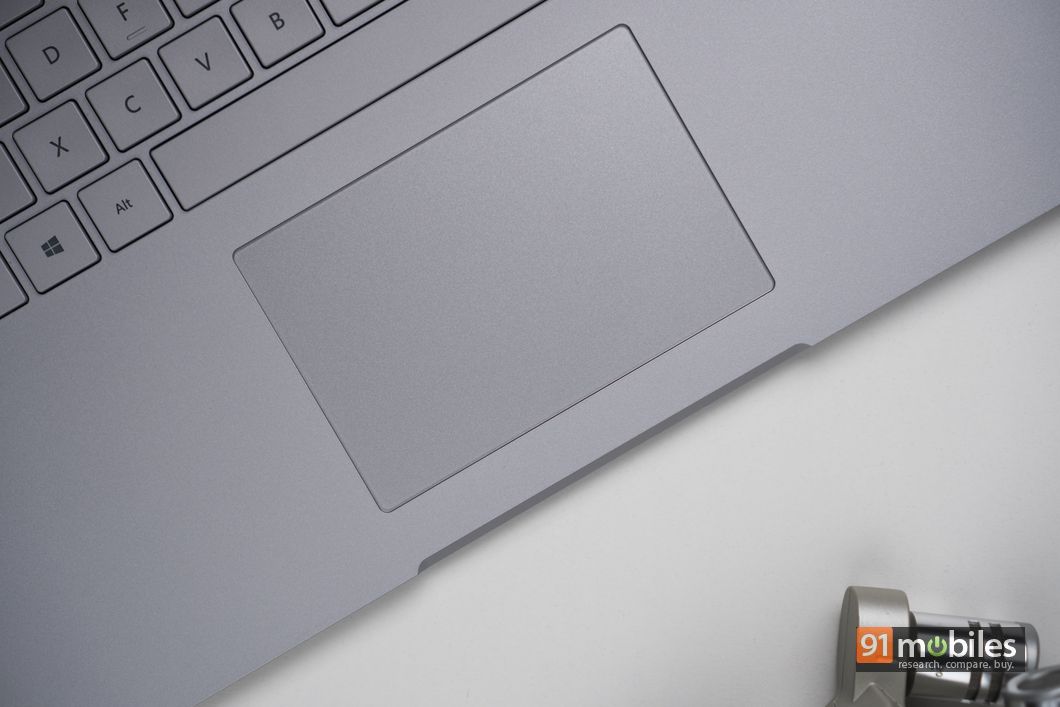 The Microsoft Surface Book 2 ships with two front-firing speakers which output rich audio, but don’t get too loud.

While the Surface Book 2 hasn’t seen many changes on the surface (no pun intended), Microsoft has drastically overhauled the laptop’s innards and has specced the machine to meet today’s standards. Underneath its metallic chassis, my review unit of the Surface Book 2 shipped with a quad-core, eight thread Intel Core i7-8650U processor which worked alongside 16GB of dual-channel, DDR3 memory. What’s more, Microsoft has even bundled a dedicated GPU with the machine in the form of a GTX 1050, which features 2GB of GDDR5 memory. For storage, the laptop comes equipped with a 512-gig Samsung SSD. 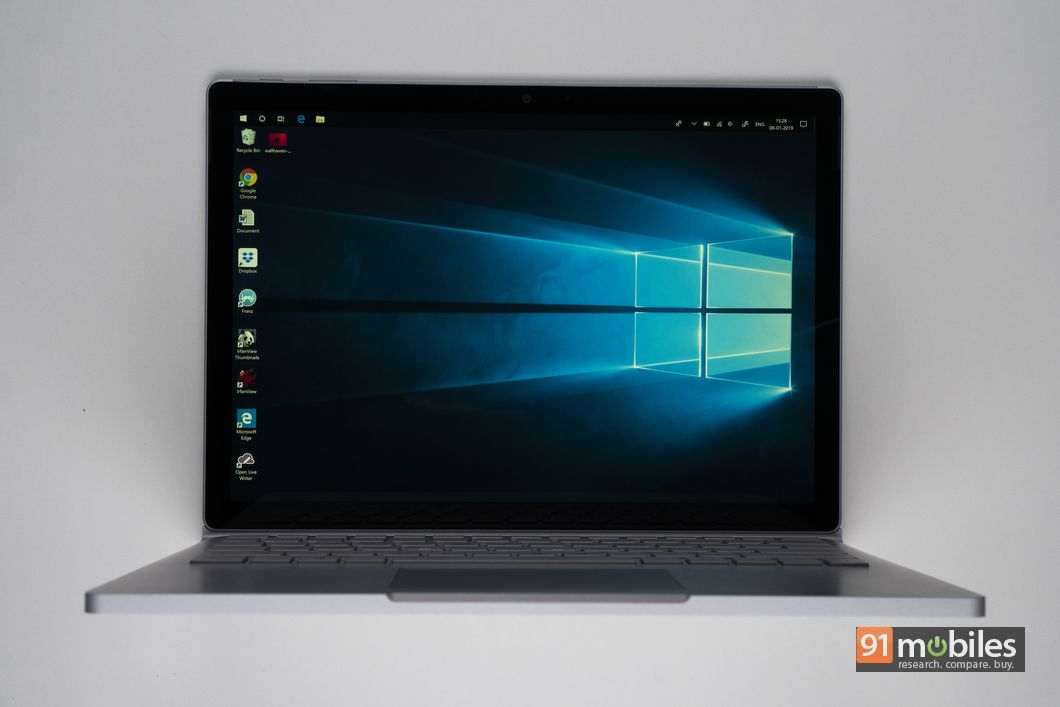 Going by the specs sheet, you’d assume the Surface Book 2 to perform admirably and the laptop doesn’t disappoint. The built-in SSD is plenty fast, the processor doesn’t chug if multiple applications are open simultaneously and for the most part, you can game on the machine too. Unsurprisingly, the laptop chew through my workflow which involved using moderately light applications like Microsoft Word and Slack, along with a few dozen apps open in Chrome web browser. As for gaming, casual e-sports titles like Counter Strike Global Offensive worked just fine on the laptop, and you can comfortably play the title at max graphics settings. However, you will have to tone down the settings considerably when playing more recent AAA games like Far Cry 5. Bear in mind that Microsoft does sell a 15-inch variant of the Surface Book 2 which features a more capable GTX 1060 GPU. Therefore, if you’re planning to game on your next laptop, then you might want to look there too.

Now, I know you’re aching to see how the laptop fared in various benchmarks, so here we go. In PCMark 10, the Surface Book 2 secured 3,610 points, which is on par with what you’d get with other machines backed by the same processor. In CrystalDiskMark, the laptop’s SSD secured zippy sequential read and write speeds of 2,138.4MB/s and 660.7MB/s respectively. Lastly, in CineBench R15, the Surface Book 2 scored 684 cb in the CPU test and 99.64fps in the OpenGL test. Compared to machines running Intel’s onboard graphics, the OpenGL score of Microsoft’s Surface Book 2 is night and day. 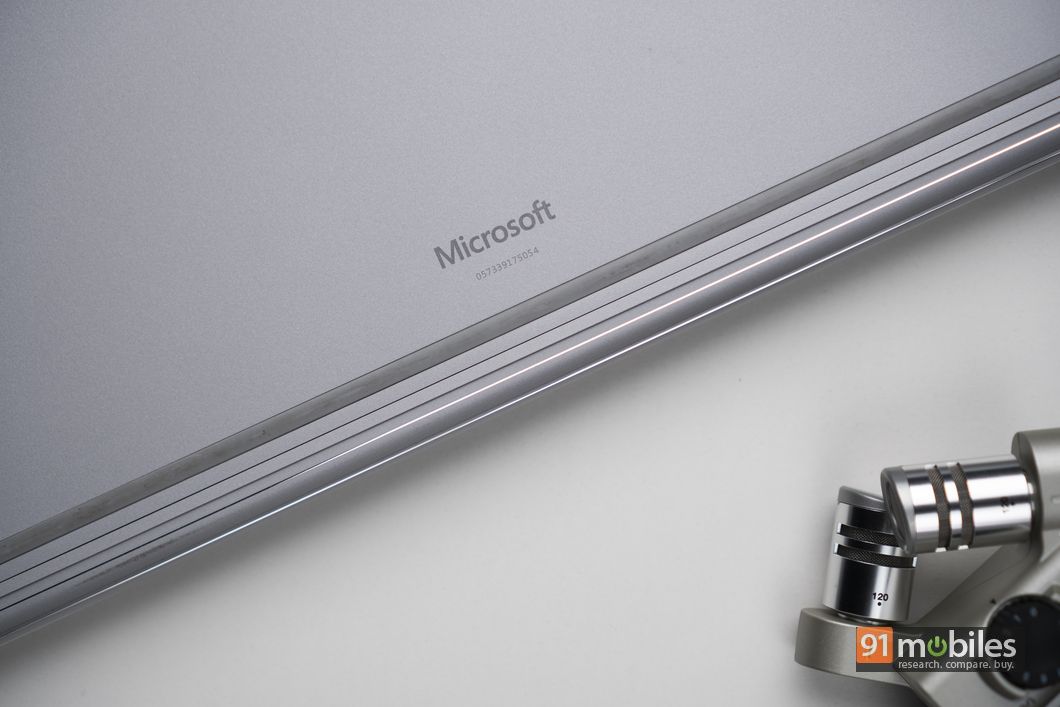 As good as the laptop’s performance is, I must hand it to Microsoft for employing a fantastic thermal management solution to keep the Surface Book 2 cool. You see, unlike other laptops, the CPU on the Surface Book 2 is present behind the display, away from the dedicated GPU which is stored underneath the keyboard. Consequently, the laptop offers excellent heat dissipation and even after hour-long gaming sessions, the machine’s chassis stayed frosty cool. 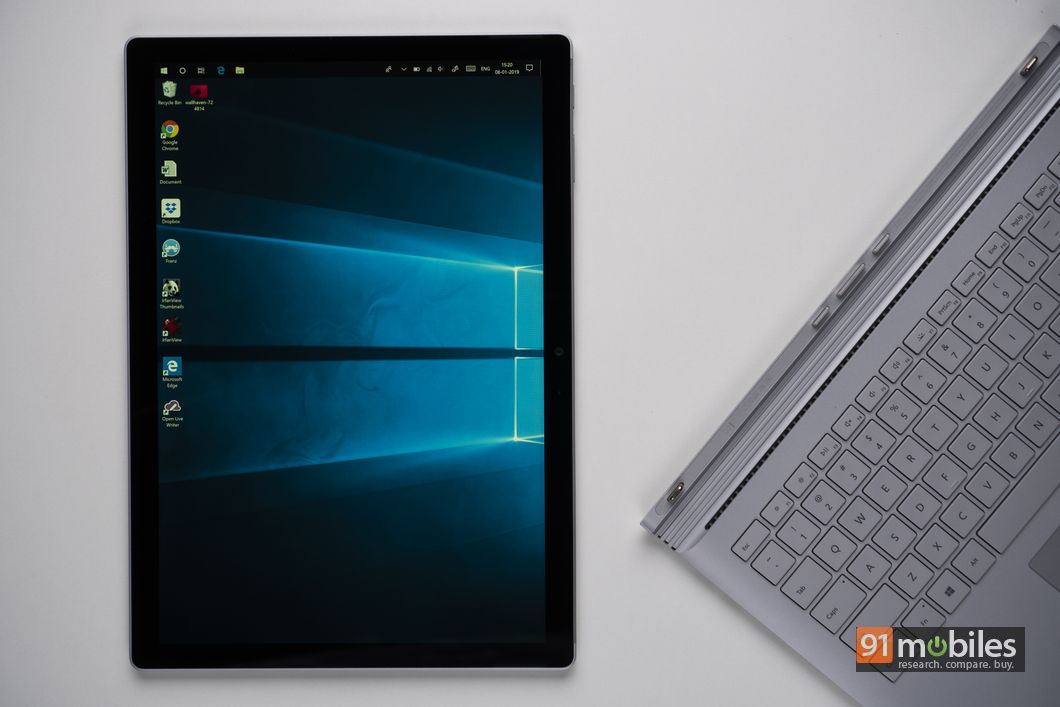 Then, there’s the battery life. The Surface Book 2 is backed by two cells – one to power the display in tablet mode and one positioned inside the base – with a combined capacity of 70WHr. In a nutshell, the battery life is quite possibly the Surface Book 2’s best feature as my review unit comfortably lasted me a full day on heavy usage. On an average, I was getting close to 8 hours of battery life off a single charge, which is just phenomenal. Quite frankly, this is the best battery life I’ve experienced on any portable machine since I purchased my MacBook Air two years ago! That being said, the display ships with a measly 2.5 hours of battery life and therefore, you’ll have to carry the base of the unit with you at all times.

There’s just something about the Surface Book 2 which sets it apart from the competition. The laptop excels at everything and offers a premium design, solid productivity performance, acts as a gateway to PC gaming and has a long, long, long-lasting battery life. However, as good as the laptop is, its starting price of Rs 1,37,999 is certainly not for the faint of the heart. And, the lack of a Thunderbolt port sticks out like a sore thumb too. 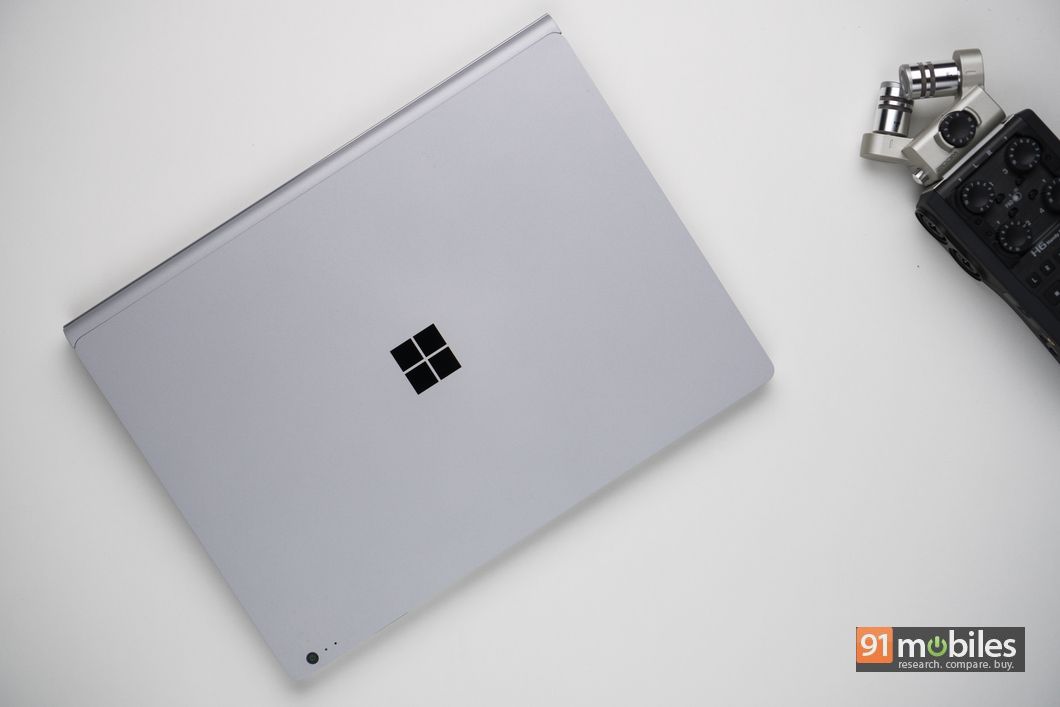 Regardless, if money is no object, then you should just swipe your card at the nearest authorised retailer and get yourself a Surface Book 2. Else, you could look at options from Dell and HP’s stables but take my word for it, they won’t be able to match the experience offered by the Book 2.

Microsoft Office to be renamed in biggest brand overhaul in 30 years: here’s the new name