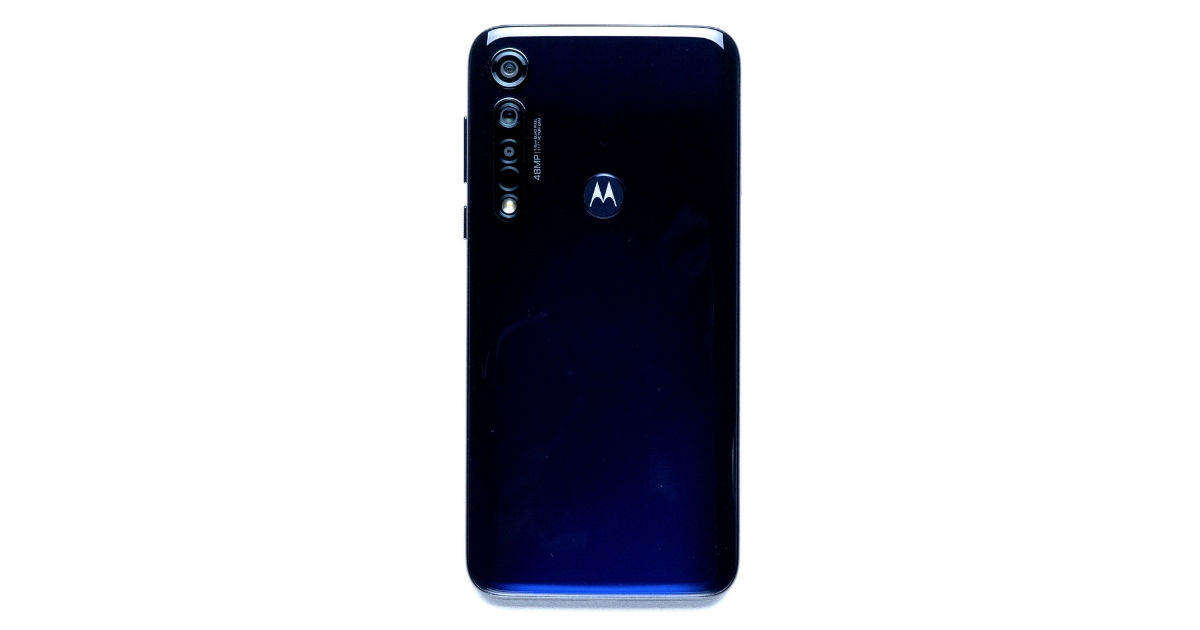 If you’ve been following India’s smartphone industry for a while, you’d be aware of the fact that even before the Xiaomis and Realmes of the world, there was a brand that proved affordable phones don’t need compromising on any aspect. Yes, we’re talking about Motorola, which revolutionised the mid-budget segment with the launch of the G series, and then repeated the feat in the entry-level with E range. And now the Lenovo-owned brand has introduced the 8th iteration of the G series – aptly dubbed the Moto G8 and Moto G8 Plus (first impressions). While the former hasn’t been launched in India, the latter has just arrived in our country. If you’re wondering whether the G8 Plus revives the magic of the G series – which, honestly speaking, has been lost with the past few iterations – then keep reading. 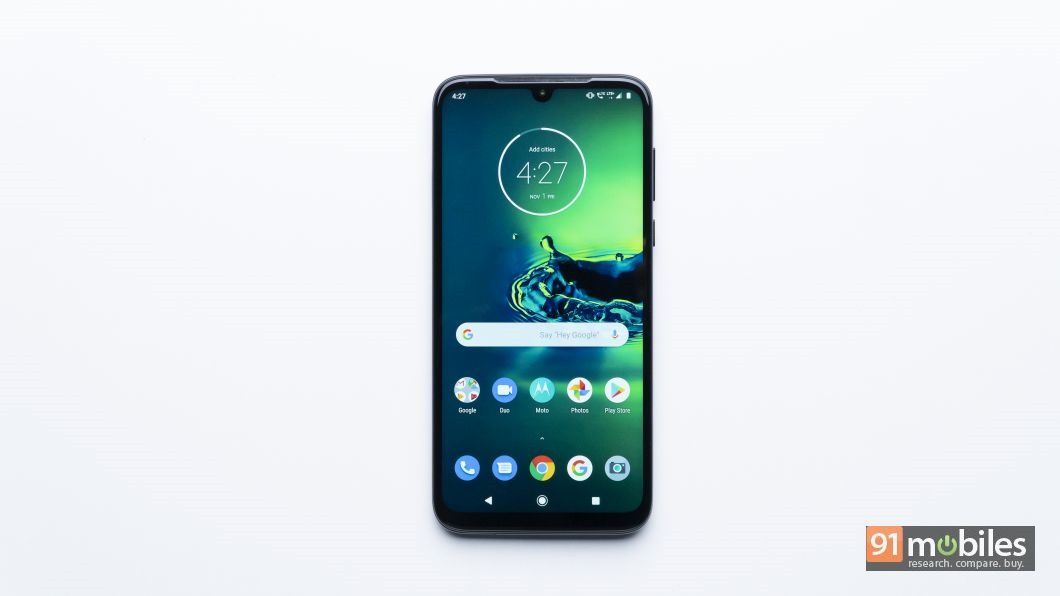 The Moto G8 Plus can be described as a lovechild of the One Action (review) and One Vision (review) smartphones – both in terms of features on offer as well as its price tag. In fact, its asking price of Rs 13,999 is exactly the same as the One Action’s MRP, proving that the brand is getting back to the good ol’ days when it got the pricing equation spot on. While there’s no dearth of competition in the sub-Rs 15k segment, the G8 Plus remains a worthy buy by offering a good mix of specifications and stock iteration of Android. 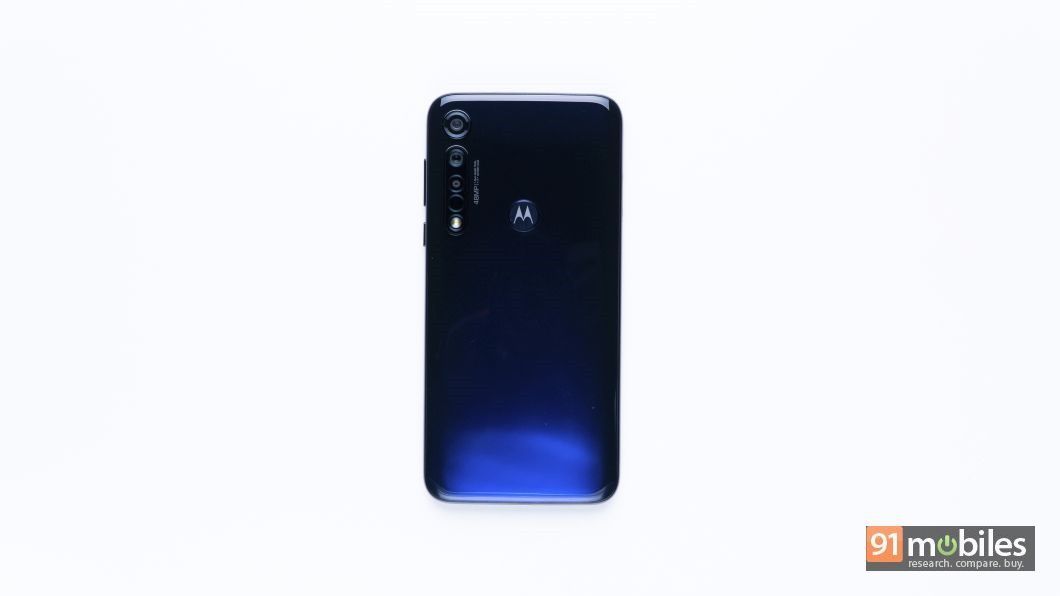 The Moto G8 Plus is quintessentially a mid-range offering, and that’s evident as soon as you lay your eyes on it. Unlike the One Vision and One Action devices, which sported the modern-looking punch-hole cut-out, the G8 Plus plays it safe by featuring a waterdrop notch up top. 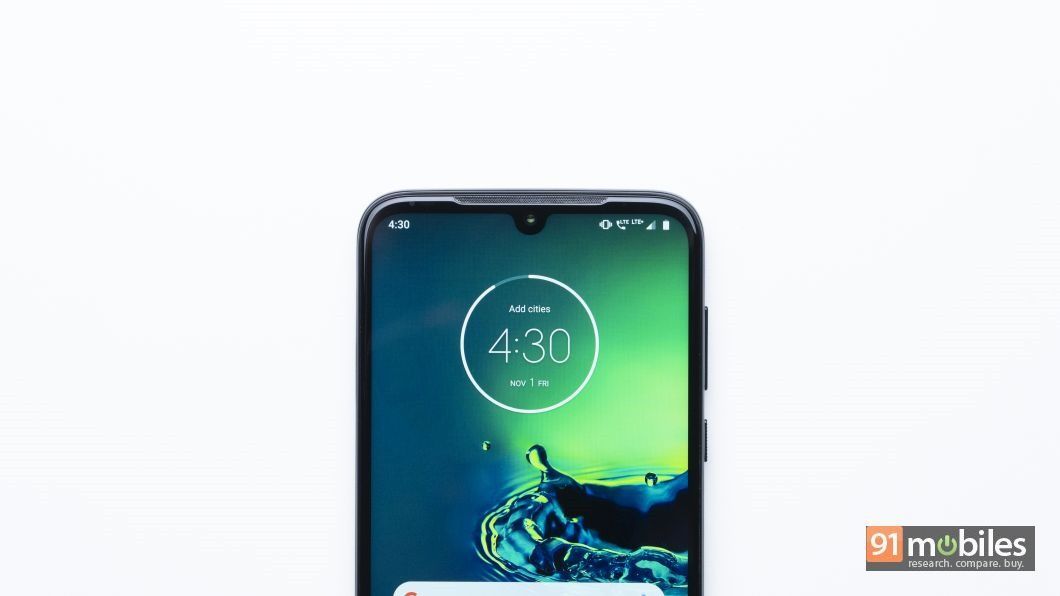 The rear panel isn’t much different, with a vertically-aligned camera array and the iconic batwing logo of the brand that doubles up as a fingerprint reader. Interestingly, the primary camera has been placed separately, and while there are two additional sensors, the laser autofocus gives the impression of being another camera. The module juts out quite a bit, and hence the device doesn’t sit flat on a surface.

With that said, the device looks really attractive in its Cosmic Blue and Crystal Pink hues, and even though I’m biased towards the former as it’s my favourite colour (and this is the one I received for review), the latter is really eye-catching. Even without any fancy gradients, the device attracts attention and thanks to the glass finish, also bounces off light in different directions. Sadly, as much as I liked the design, the device is a fingerprint magnet and gets smudged within minutes of using. Then there’s the fact that the handset is quite slippery. Hence, I’d strongly recommend you to use the bundled case. The good thing is that the device continues with the water-repellent design just like its predecessors.

Moto G8 Plus design gallery
1 of 3

Apart from this, the device follows the usual ethos, though I really loved the inclusion of Dolby Atmos speakers. The audio output is impressive, both in terms of quality and loudness.

The display on the Moto G8 Plus measures 6.3-inches diagonally, and bears full HD+ resolution. The IPS panel is sharp and vibrant, and sunlight legibility isn’t a concern either. However, if you’ve used an AMOLED panel before, then you wouldn’t find the screen to be as punchy. Acting as a layer of protection against scratches is Corning’s Gorilla Glass. As pointed out earlier, the Motorola G8 Plus brings the best of both worlds. It does that by offering the camera configuration of the One Vision and swapping the ultra-wide camera with an ultra-wide action camera, which has been rotated 90-degrees. There’s no OIS yet, but the EIS does come in handy in getting smooth footage aided by the fact that you can shoot easily with a single hand without the need of rotating the phone. 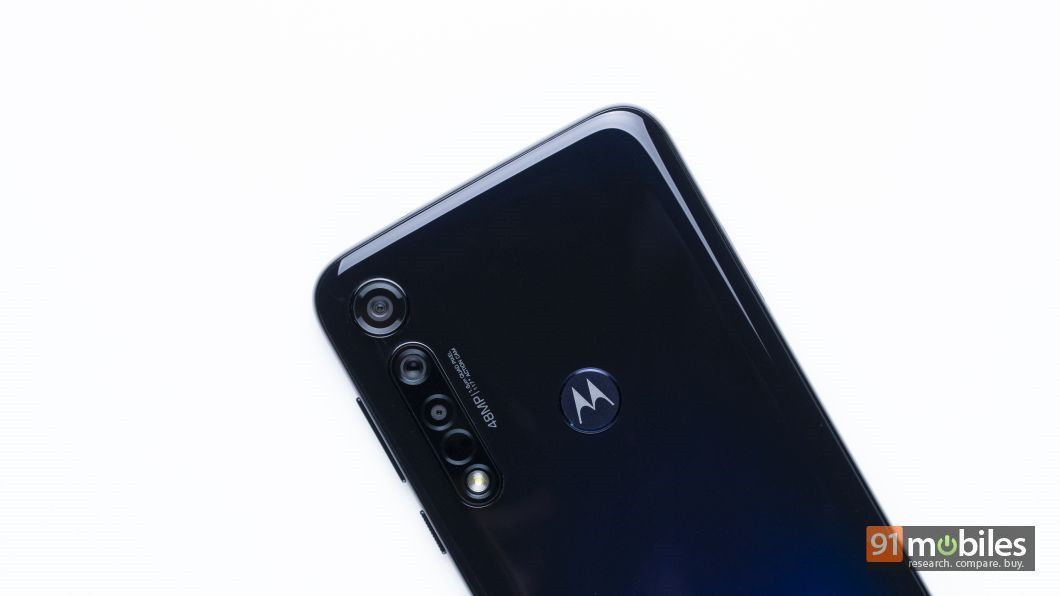 On the interface front, the app is user-friendly and makes it easy for anyone to understand it intuitively. Sadly though, there’s no way to capture images in 48-megapixel resolution.

And in terms of the imaging prowess too, the Moto G8 Plus delivers. In well-lit conditions, the pictures turn out to be sharp and vibrant, while close-ups are pleasing too. Worth noting however, that despite featuring a 48MP sensor, the G8 Plus captures the 12-megapixel output and doesn’t let you shoot full-res images either. But the pixel-binning tech does seem helpful for low-light photography, with noise levels kept to the minimum levels, and accurate colour reproduction. The best part was the exposure is controlled as well… and that remains the case when you enable the Night Vision mode. Like all recent phones, the Moto handset does come with AI mode, though it usually is able to detect food or night conditions only. Moreover, the food mode just makes the entire shot warmer which makes it seem unnatural.

As mentioned in the Moto Action review, the 117-degree shooter is quite impressive for capturing videos. And the fact that it doesn’t require you to hold the phone horizontally is great too. You get smooth footage from the G8 Plus too without having OIS support, though I’d have certainly liked the ability to capture photos from this sensor as well. The primary camera on the other hand, can shoot 4k videos. Selfies turn out to be good as well, though it’s worth stating that Motorola uses the quad-pixel tech for the front camera too. That means, the 25MP sensor outputs 6-meg pictures by default, though you do get an option to capture selfies in the highest resolution.

Now this is an area where Moto fans might be in for a disappointment. You see, the G8 Plus draws power from Qualcomm’s Snapdragon 665 chipset. The octa-core chipset is based on the power-efficient 11nm fabrication process and fuels the likes of the Realme 5 (review) and Redmi Note 8 (review) – both of which are priced below Rs 10k. However, specs aside, the real-life performance on the Moto G8 Plus is commendable. It’s fast and there’s no lag either… all thanks to Motorola’s optimisations and – you can guess it – clean software. 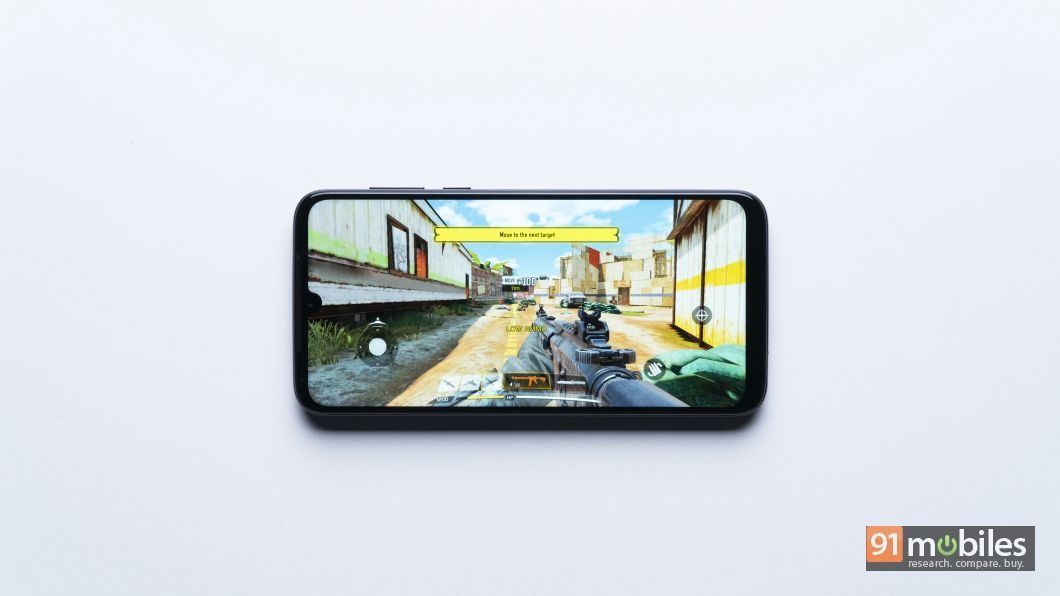 Speaking of that, the Moto G8 Plus boots Android 9.0 Pie without any sort of customisations apart from the brand’s signature features such as Moto Display.

Helping with the performance is 4 gigs of RAM, which ensures apps remain in the memory and switching between them is instantaneous too.

As far as gaming experience is concerned, the Snapdragon 665 comes with the Adreno 610 GPU. This hardware enables the device to run PUBG with smooth graphics at high frame rates, and balanced at medium. Playing for about 30 minutes in the former was pretty good and there wasn’t any lag as such. More importantly, there weren’t any major heating issues either.

For storage, the G8 Plus features 64GB memory onboard, which offers ~51GB out of the box. You can also choose to increase it further by inserting a microSD card of up to 512GB, though you’d need to give up on dual-SIM capabilities in that case.

Unlike its predecessor, the Moto G8 Plus ensures that you don’t need to carry a powerbank with you. Its 4,000mAh battery offers long endurance and doesn’t need a recharge before a day and a half even after heavy usage. And when you do need to juice it up, the bundled TurboPower adapter does that from 10 to 100 percent levels in a little less than two hours that isn’t really the fastest in this price band.

Why pay in full when you get EMIs with 0% interest?
Buy Moto G8 Plus now and pay later in flexible EMIs!
Know More

The Moto G8 Plus is a capable smartphone that aims to deliver on all fronts. If you’re looking for a reliable daily driver with no-nonsense software experience, great display, good cameras, decent performance and powerful battery life, the G8 Plus is the ideal handset for you.

Yet, if you start taking each of its aspects apart, then it doesn’t seem as impressive. The Redmi Note 8 Pro (review), priced just Rs 1,000 more offers impressive cameras, better performance and battery life. The Realme 5 Pro (review) on the other hand, is available around the same price point, but promises versatile imaging prowess and smoother performance. There’s also the Vivo Z1 Pro that has a higher screen-to-body ratio courtesy its punch-hole display along with boasting a more powerful processor and a capacious 5,000mAh battery. 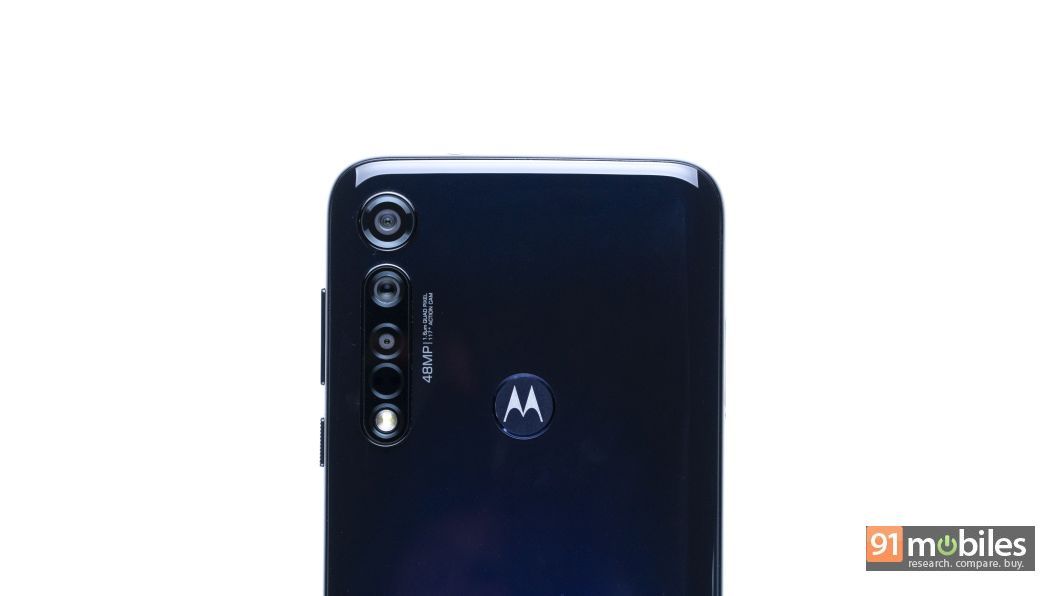 In short, the G8 Plus fails to be greater than the sum of its parts. If you don’t look at the spec sheet and then decide which phone to purchase, then the G8 Plus gets a solid recommendation, but if not, then it may not be among the top options unless you value vanilla Android the most.