“Our take on OnePlus’ latest affordable flagship – the OnePlus 7”

At the time of writing this review, my fellow colleagues are raving about the excellent cameras on the Huawei P30 Pro (review), the shark-fin pop-up camera on the OPPO Reno (first impressions) and the smooth, curvy display on the OnePlus 7 Pro (review). I, on the other hand, have been using the OnePlus 7 as my primary device and as much as I hate to admit it, it’s not an exciting phone. The device is basically a 6T (review) refresh, and it’s clearly the undercard in OnePlus’ current lineup. But, the fact that the phone is ordinary doesn’t take away from it one bit. Truth be told, it’s the better OnePlus phone out there for most buyers. To know why, read on.

Look, design-wise, the OnePlus 7 is identical to its immediate predecessor, the OnePlus 6T. The company has gone the Apple route with its latest budget flagship and has basically slapped newer, more powerful innards on a year-old chassis. That said, buyers who already own the 6T will probably not buy the OnePlus 7 in the first place, so for everyone else out there – the design of the OnePlus 7 is quite good. It’s an all-glass affair and you even get newer colours this time around. The review unit I was sent from the brand featured a bright red paintjob which looks stunning, to say the least. Unfortunately, the back of the device smudges really easily, so you might have to wipe it down every once in a while. 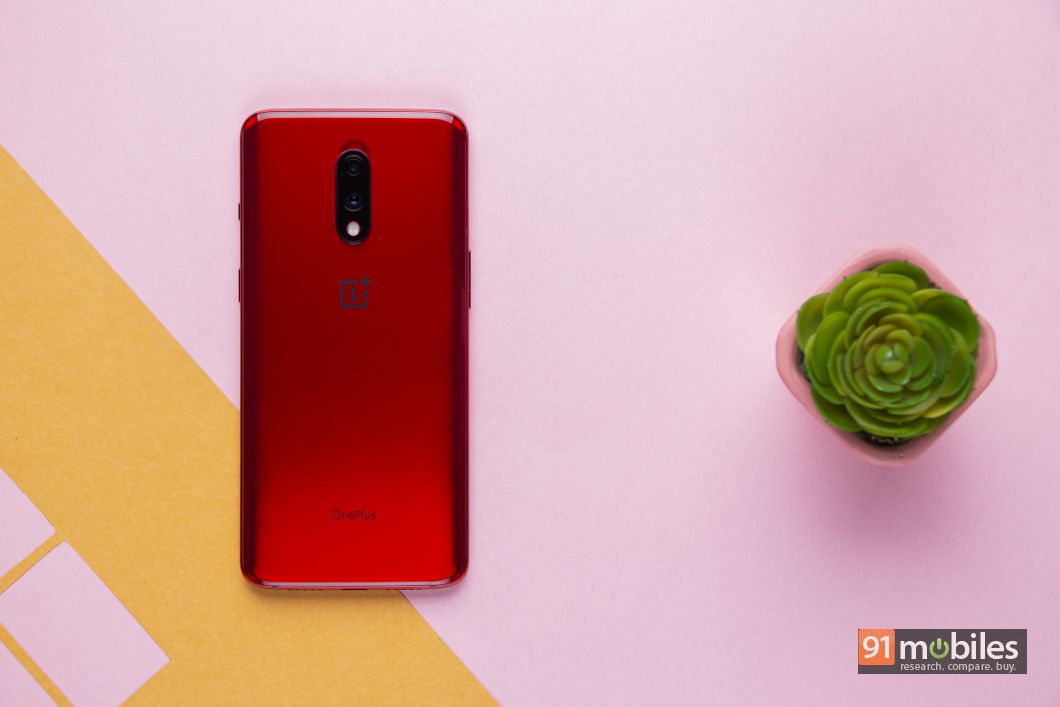 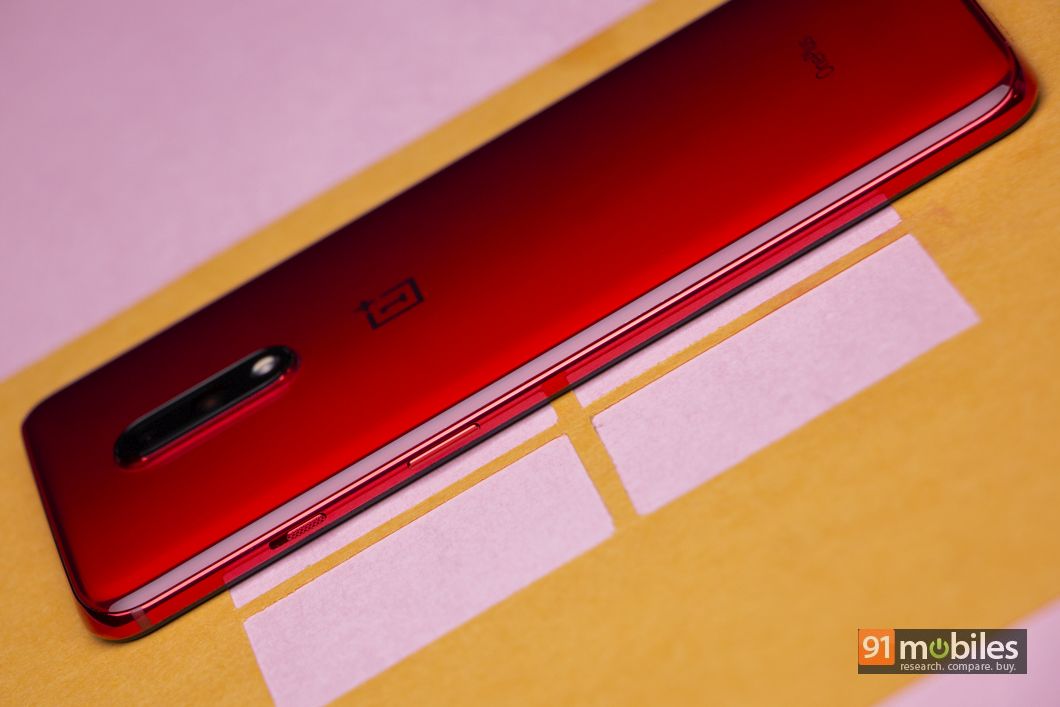 What’s more, OnePlus has incorporated some of the new features from its top-end flagship in the OnePlus 7 too. For starters, the device gets a stereo speaker setup akin to its pricier sibling which paves way for an immersive media consumption experience. The smartphone also ships with the new and improved optical fingerprint sensor, which is quicker than the one on the 6T. And, if you don’t fancy pressing your thumb against the screen to unlock the phone, you can rely on the smartphone’s speedy and accurate facial recognition instead. 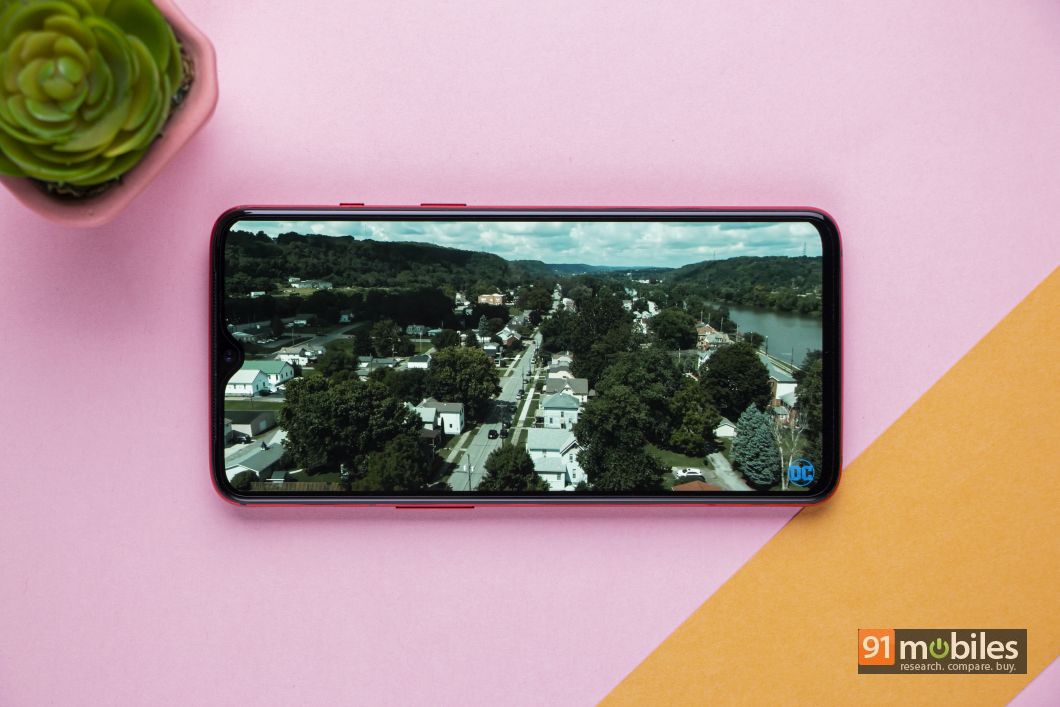 The biggest tradeoff you’ll have to make when you opt for the OnePlus 7 over the Pro model is in the display department. The handset features the same 6.41-inch Optic AMOLED panel from the 6T and while it is pretty to look at, the panel honestly feels like a step down after you’ve used the 7 Pro. It doesn’t have so much to do with the panel’s full HD+ resolution, but once you’ve used a screen with a 90Hz refresh rate, anything lesser simply pales in comparison. That said, for the price, it’s a fantastic screen and it even comes with Corning’s Gorilla Glass 6 on top, which should help prevent scratches to some degree. The display gets quite bright too, so using it outdoors isn’t a hassle either. 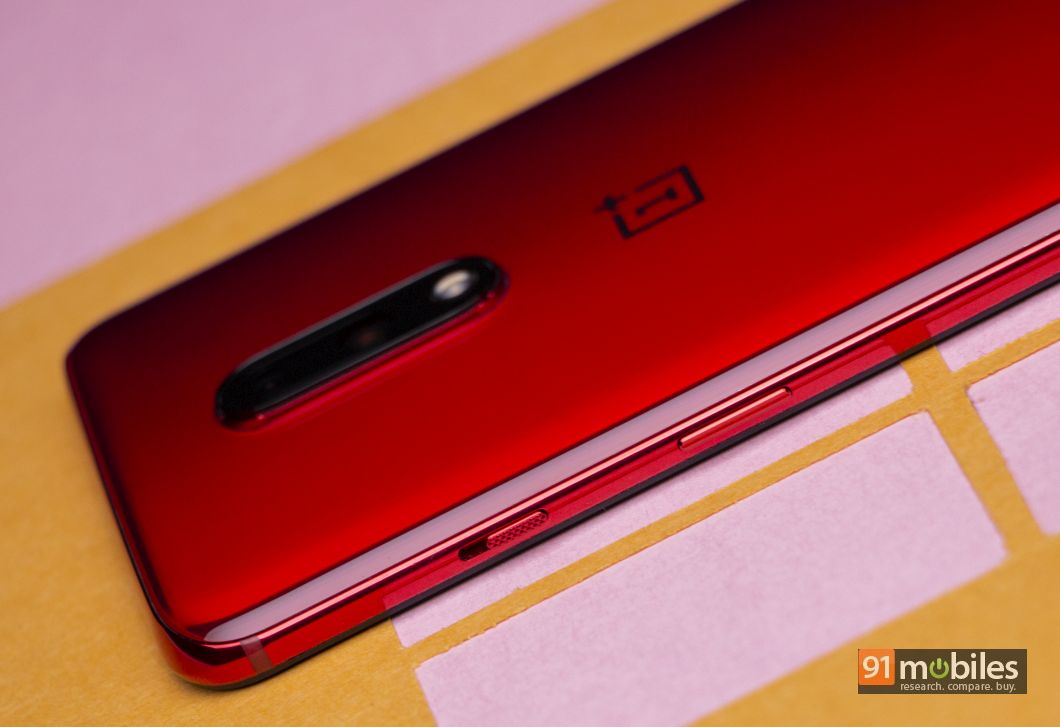 My only other qualm with the smartphone’s design is that it has a ginormous camera bump, which makes it impossible to use the phone when it’s laid flat on a table. Consequently, I slapped a case on the phone to somewhat hide the monstrosity on its back.

While the design of the OnePlus 7 and the OnePlus 7 Pro couldn’t be any more different, the handsets draw parallels when it comes to core specs. Consequently, the OnePlus 7 can do everything the Pro variant can since it too is backed by Qualcomm’s Snapdragon 855 processor which works alongside either 6GB or 8GB of memory. What’s more, OnePlus has even furnished the device with faster UFS 3.0 storage, which cuts down app load times significantly. 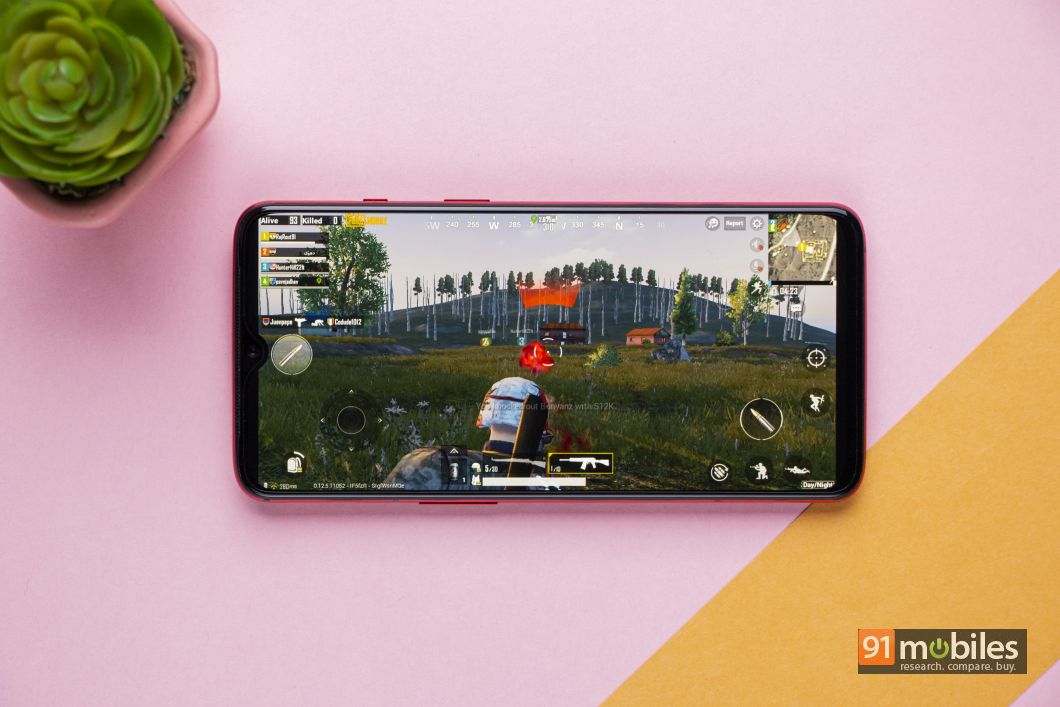 Suffice it to say, if you want the absolute best in terms of performance, you can’t go wrong with the OnePlus 7. And, a pro tip – don’t buy the 8GB RAM variant of the device in hopes of a speed boost. The 6GB RAM variant is just as quick, so only opt for the higher RAM variant if you want more storage to boot. For the uninitiated, the 6GB RAM model ships with 128GB of storage, whereas the 8GB RAM model features 256GB of storage. Moreover, since OnePlus phones don’t support microSD cards, you’ll be stuck with what you get from the word go, so choose wisely. 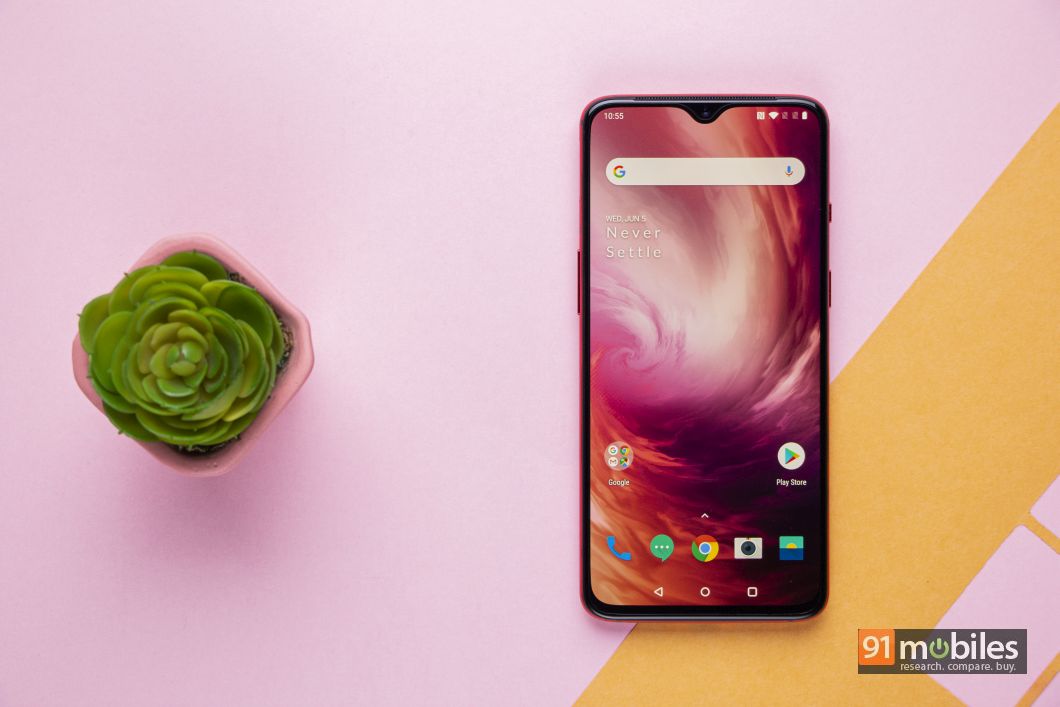 The battery on the OnePlus 7 has served me well so far. The handset is powered by a 3,700mAh cell which managed to see me through the end of a day on moderate use. Throw in a couple of games of PUBG and you might have to charge the phone before you leave your office at night. To give you a better picture, the handset lasted over 17 hours in our video loop test, which is fantastic. Unfortunately, the smartphone doesn’t ship with the company’s 30W Warp Charging which debuted with the OnePlus 6T McLaren Edition and made its way to the 7 Pro. Instead, the OnePlus 7 opts for the relatively slower 20W Fast charging (earlier called Dash charging). Don’t get me wrong, the battery still charges quickly, but it would’ve been nice to see the latest charging standard on the OnePlus 7 too.

As for the software, the OnePlus 7 boots the company’s OxygenOS on top of Android Pie which, in a nutshell, is the best version of Android I’ve ever used. The skin is lightweight and minimalistic, meaning it doesn’t take up too much of the system resources. Moreover, it comes with a lot of useful features, some of which were introduced recently with the new flagships. For instance, if you’ve been struggling to cut down on your smartphone usage, you might want to check out ZenMode, which essentially locks you out of your device for 20 minutes and mutes all incoming notifications. Some other new utilities include a screen recording functionality as well as a Caller Identification feature which has helped me dodge several spam calls from various customer service agents. 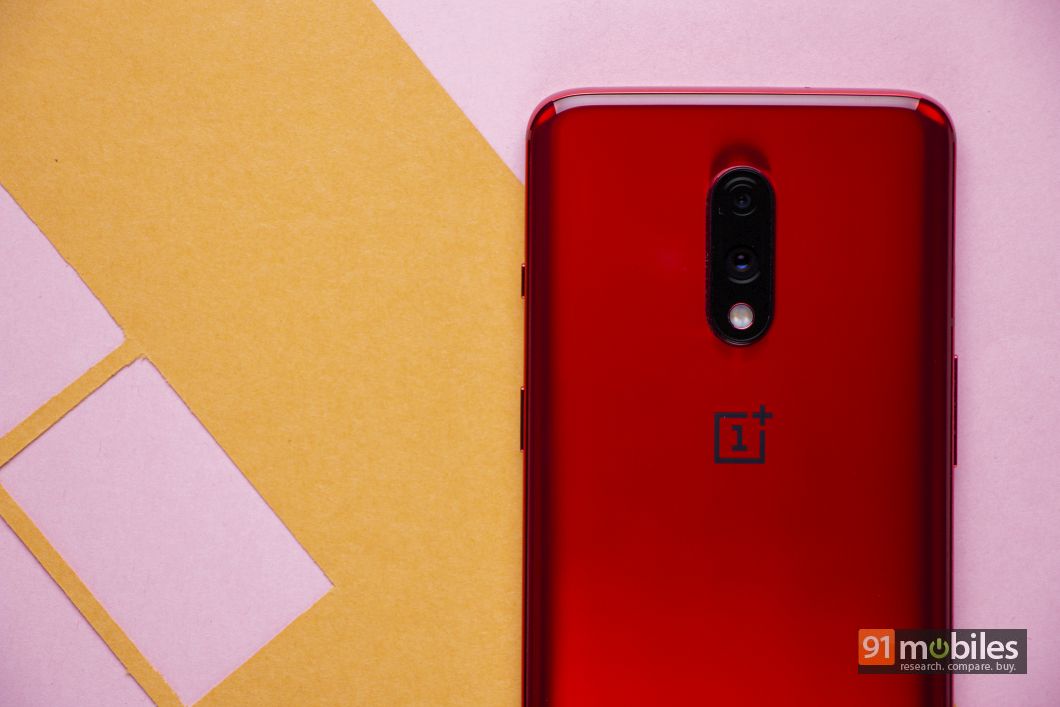 And then, there are the cameras. In order to make the phone more affordable, the OnePlus 7 doesn’t feature the Pro model’s wide-angle and telephoto lens. Instead, it ships with a 5MP depth sensor, which works alongside a 48MP Sony IMX 586 lens at the back. Now, for those lamenting on the absence of the wide-angle and telephoto lenses, trust me, you’re not missing out on much. While the shooters on the Pro model offer more versatility, the image quality from the respective lenses is nothing to write home about. 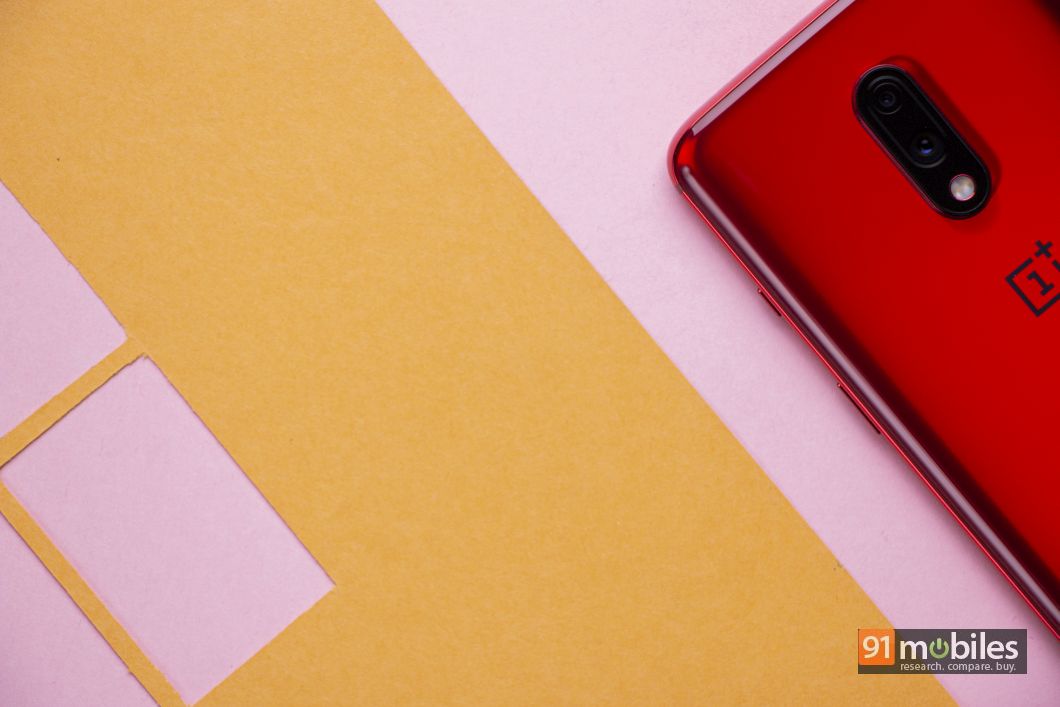 Moreover, if you’ve read my OnePlus 7 Pro review, then you’ll know that I was somewhat displeased with the smartphone’s main camera too. But, thanks to the OnePlus 7’s relatively affordable price tag, I’m more forgiving of its imaging capabilities. In a nutshell, the OnePlus 7 clicks the exact same images from its main rear camera as the OnePlus 7 Pro and therefore, you’ll have to take the good with the bad.

During the day, the OnePlus 7 clicks beautiful images with bountiful detail. However, it does struggle to expose the picture properly at times. I noticed the same issue with the Pro model too, where it failed to extract the necessary details from the sky at times. 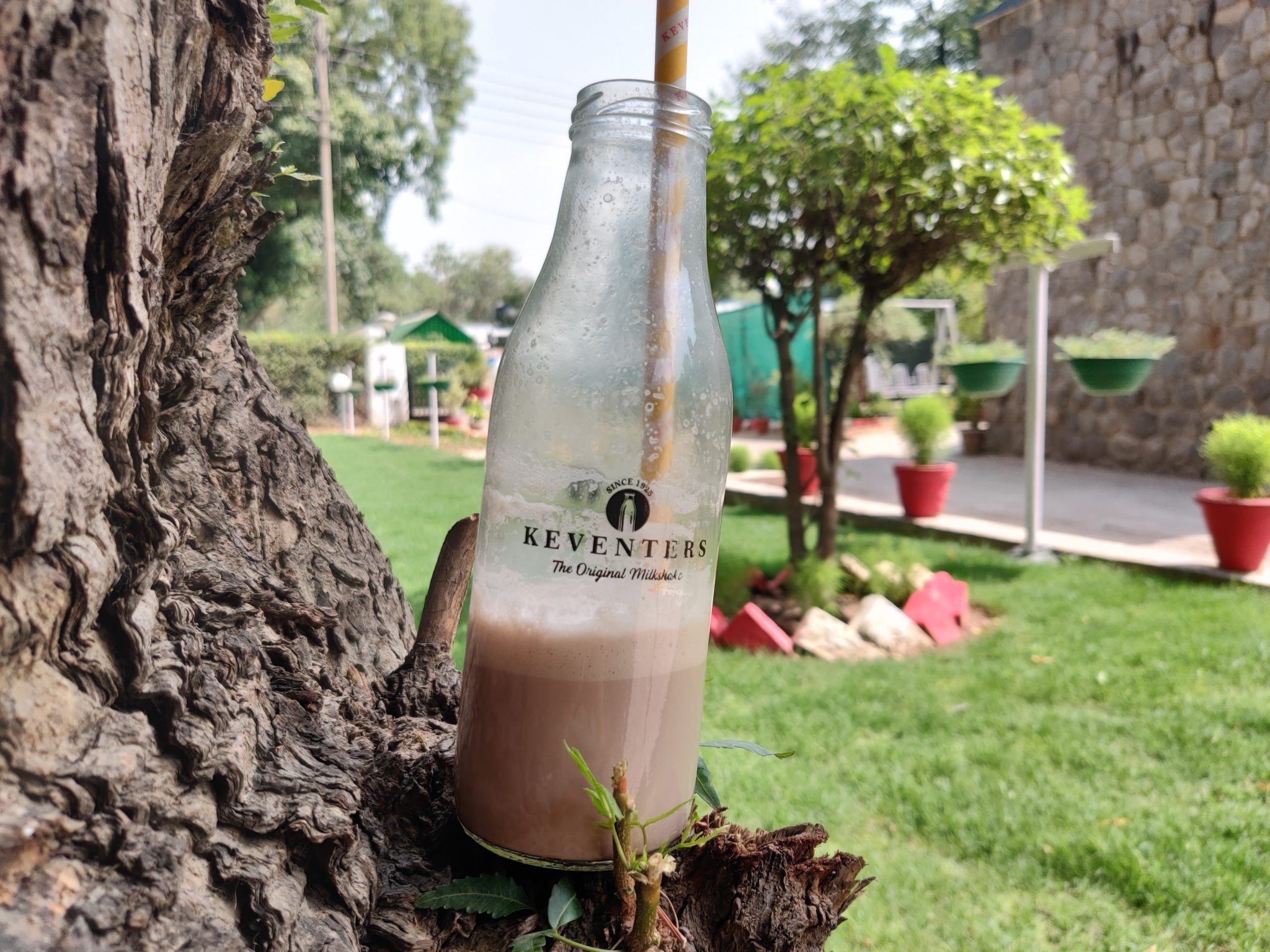 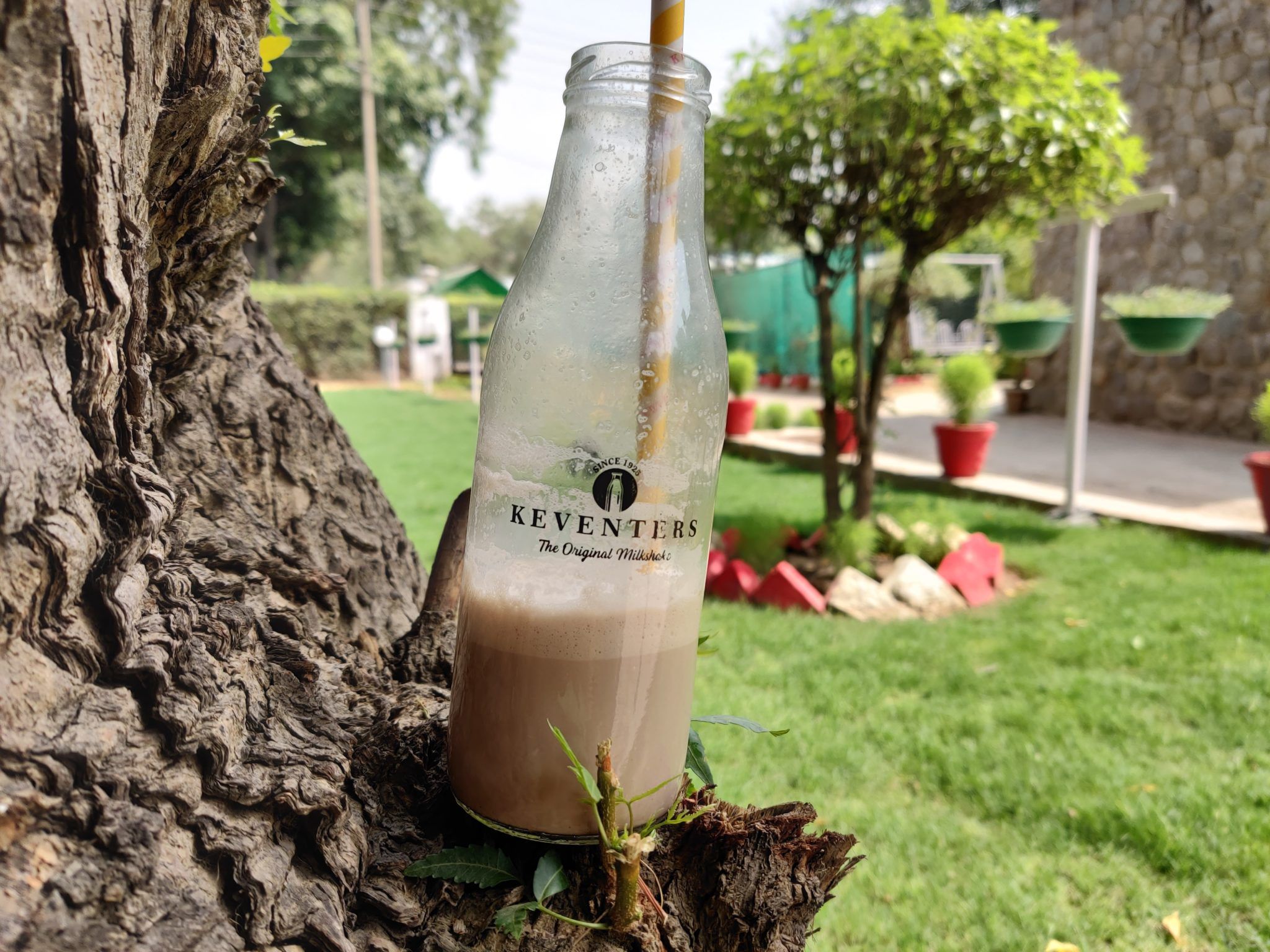 Now, of late, I’ve noticed that pictures from the Pro model have more punchy colours and better contrast, but that could have something to do with the recent camera update which hit the phone. I’m confident that the company will roll out a similar update for the OnePlus 7 soon too but as it stands, pictures from devices like the Honor View 20 appear more pleasing in comparison, thanks to the phone’s AI engine boosting the saturation and making the scene appear more lively. 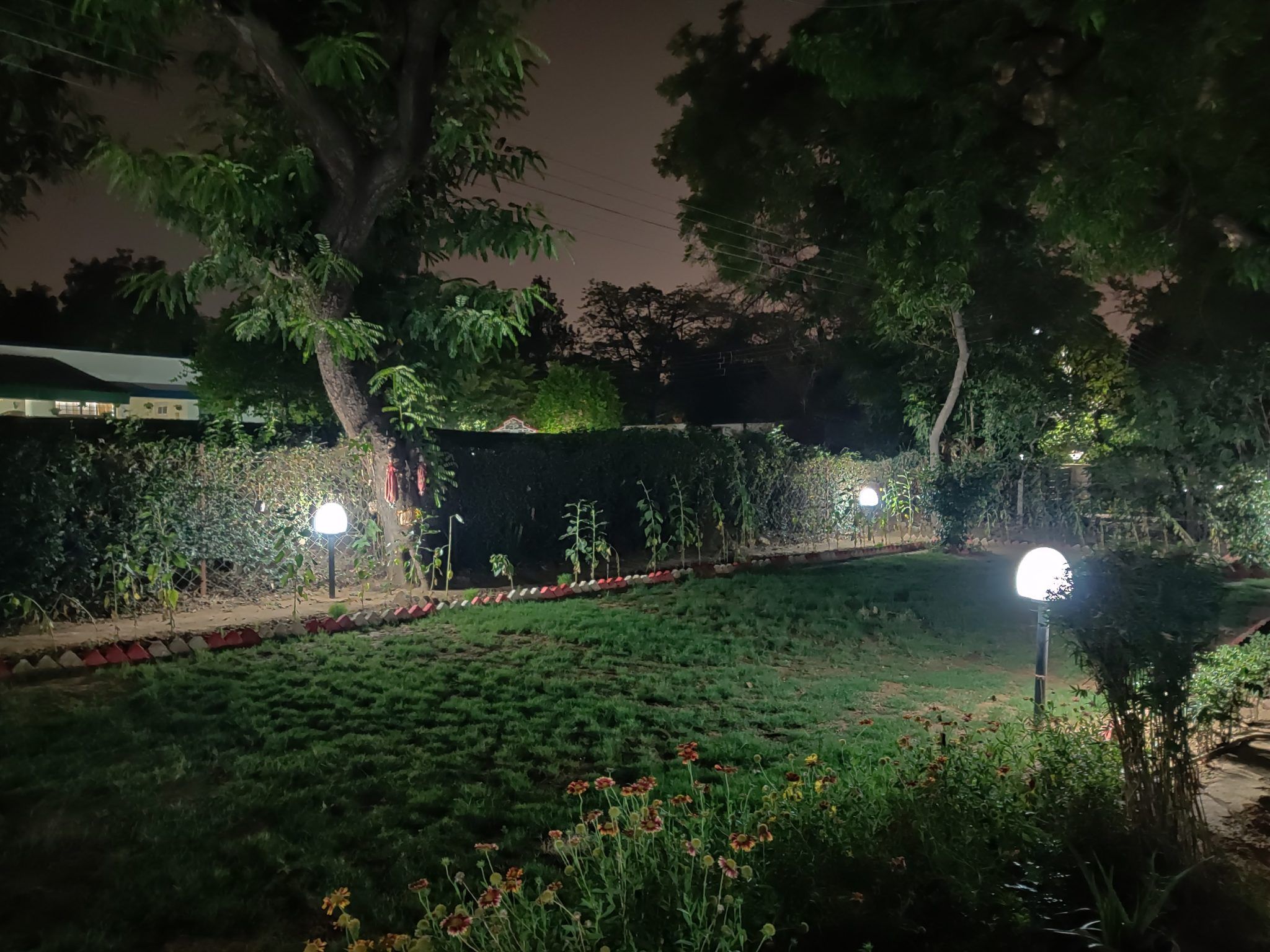 At night, the OnePlus 7 clicks slightly worse photos than the OnePlus 7 Pro, which might have something to do with the pricier model’s wider aperture lens. As can be seen from the comparison image, while both the photos of my garden look more or less the same, the flowers appear more tasteful in the OnePlus 7 Pro’s shot. Moreover, the OnePlus 7 Pro had a better lid on lens flaring too. 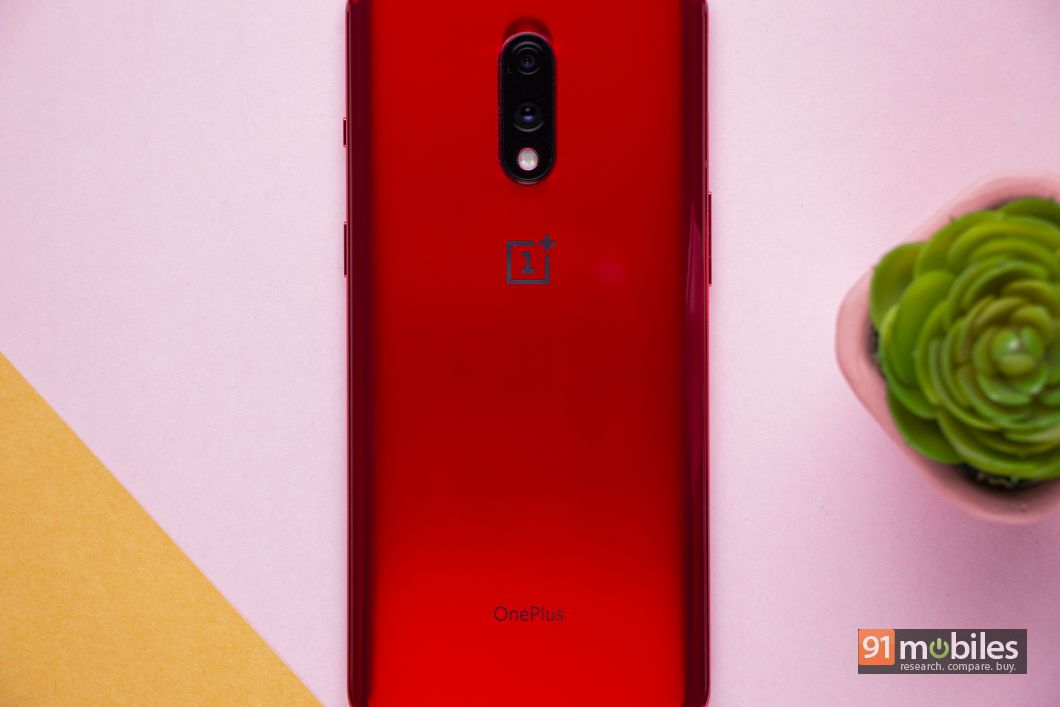 Where the OnePlus 7 ousts its bigger sibling is when you’re taking portrait shots with the device. You see, since the OnePlus 7 Pro uses its telephoto lens to click portraits, the smartphone offers a closer crop on the subject. Therefore, most of the time, you’ll have to take a step back to get the subject in the frame properly. Moreover, as mentioned previously, the quality of the photos from the telephoto lens of the OnePlus 7 Pro isn’t the sharpest. Ergo, if you click a lot of portrait photos, then the OnePlus 7 will suit your needs better as it clicks sharper images with a wider crop. 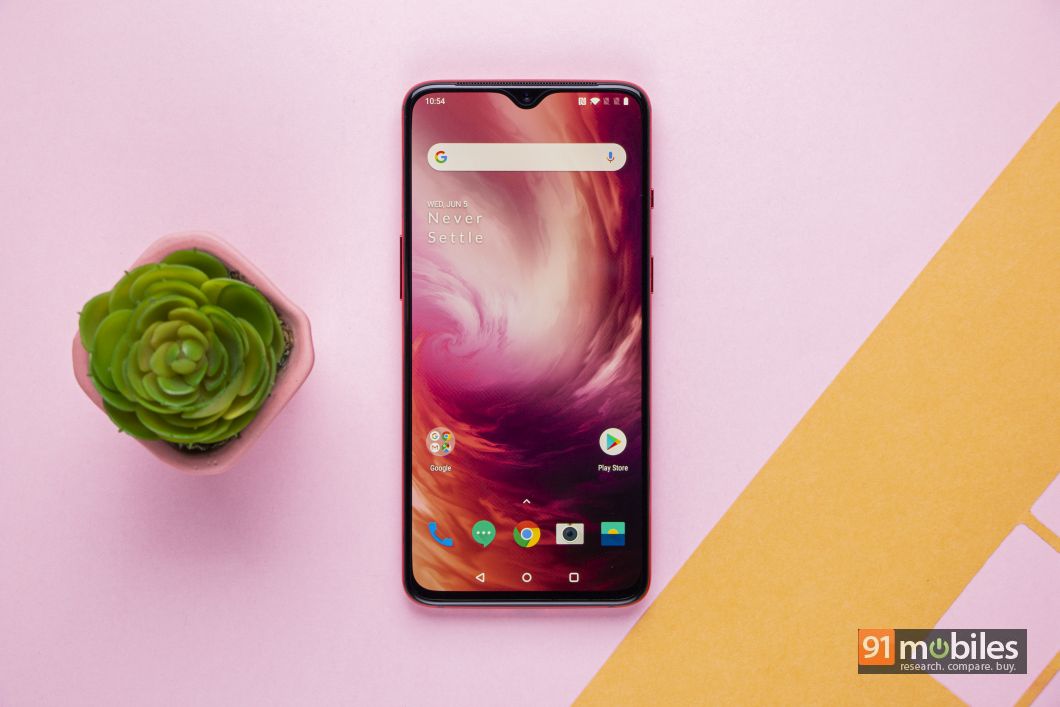 To sum up, for its starting price of Rs 32,999, the OnePlus 7 offers incredible performance, clean software, reliable cameras, long-lasting battery life, and a premium design. It certainly doesn’t have the same charm as owning a OnePlus 7 Pro, but it does make your bank balance seem prettier. 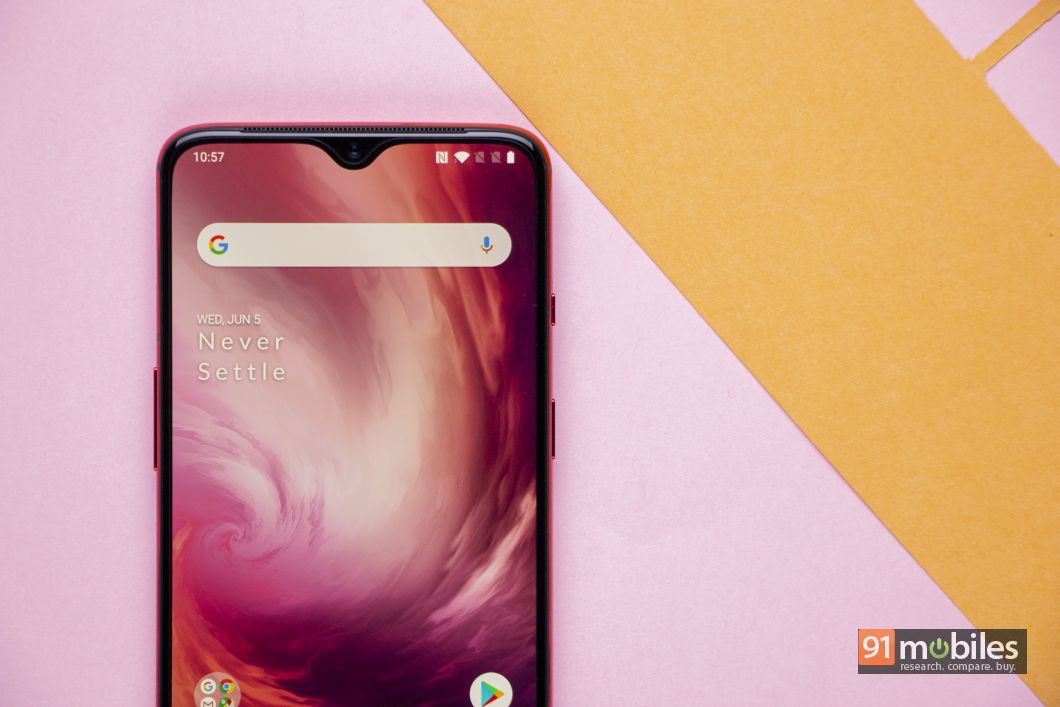 As for the competition, currently, the OnePlus 7 is THE affordable flagship to get but the scenery could soon change once ASUS unveils the Zenfone 6 in India. You should also watch out for the Honor 20, which is expected to hit the shelves this month too. Moreover, the recently launched OPPO Reno hits the sweet spot between the OnePlus 7 and the OnePlus 7 Pro as it starts at Rs 40K, offers noticeably better cameras than both OnePlus phones and is backed by the same high-end specs.

Choosing which flagship to get is nothing short of a nerve-racking ordeal, so I’ll suggest you wait a few more days before pulling the trigger on your purchase. We’re working on our full reviews for most of the aforementioned devices, which might help you demystify things better.