91mobiles.com
Home Comparisons OnePlus Band vs Mi Smart Band 5: which one should you buy? 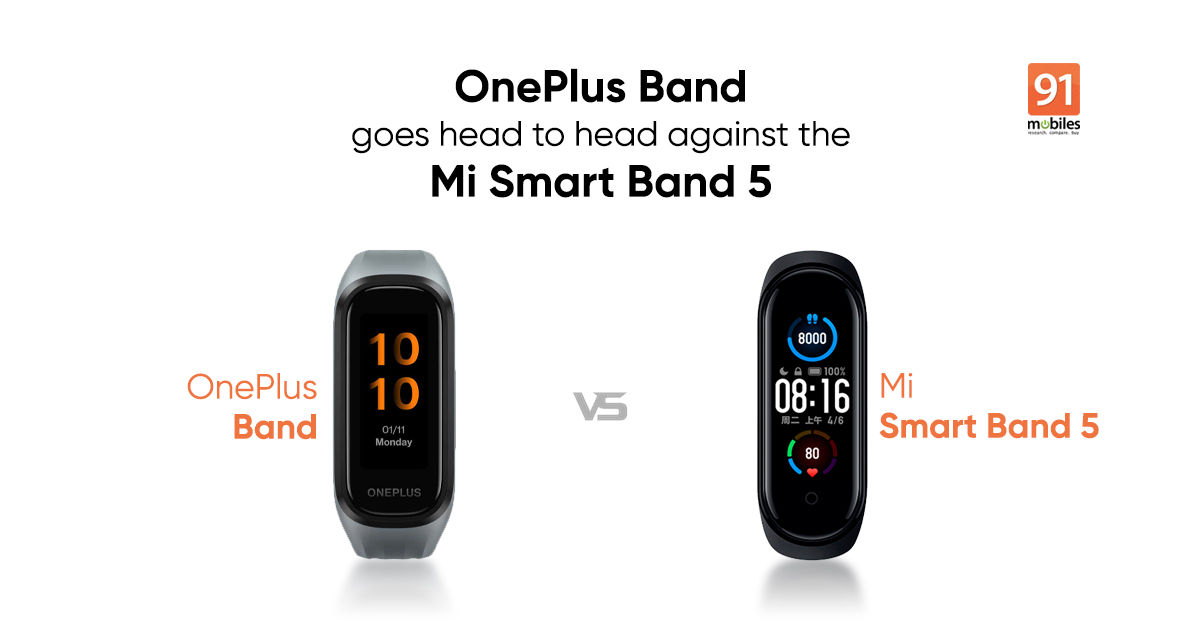 They come from rival brands. And are designed to do broadly the same thing – keep an eye on your health and fitness levels. Neither comes at a price that endangers bank accounts or kidneys. And both claim to be super innovative and efficient.

Oh and did I mention that they come with the same price tag? Yes, Rs 2,499 apiece.

I am talking of course, of the just-launched OnePlus Band and the band it hopes to knock off its perch, the Xiaomi Mi Smart Band 5. They appear very similar, so much so that my mum mistook one for the other. And the feature, design, and even price functionality do not help matters. So which one is the best for you? Let me try to work it out.

They look like peas in a pod…with different brand names 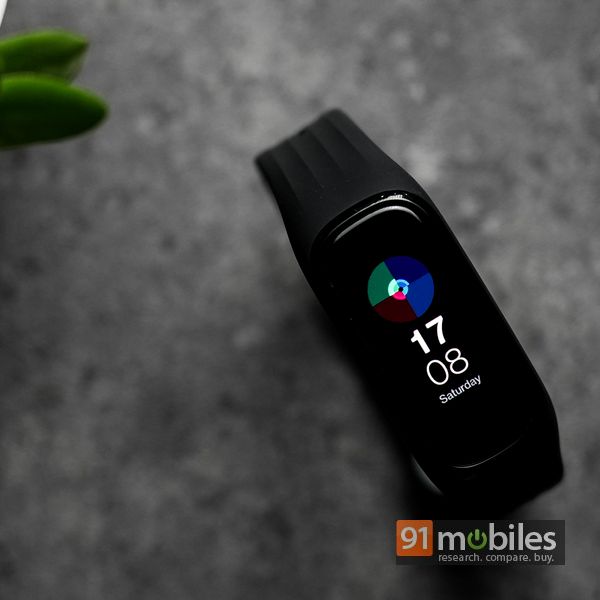 Both bands follow the general fitness band design template – there’s a capsule with a 1.1-inch AMOLED display in front and sensors on the back that pops into a band. There is a very slight difference in that the Mi Smart Band (pictured below) has a tiny touch button below the display, whereas the OnePlus Band (above) has no such. The strap in both cases is a slim one with holes punched in on one side of the watch and a button-like inserter on the other. Both bands are rather comfortable and I had no problems with them in terms of wearing them for long periods of time – even sweat did not make them uncomfortable to wear. They are both around 20 grams in weight, along with the band, so are barely noticeable. Speaking of sweat, they are both water-resistant and come with a 5 ATM rating, meaning you can use them in a swimming pool as well. 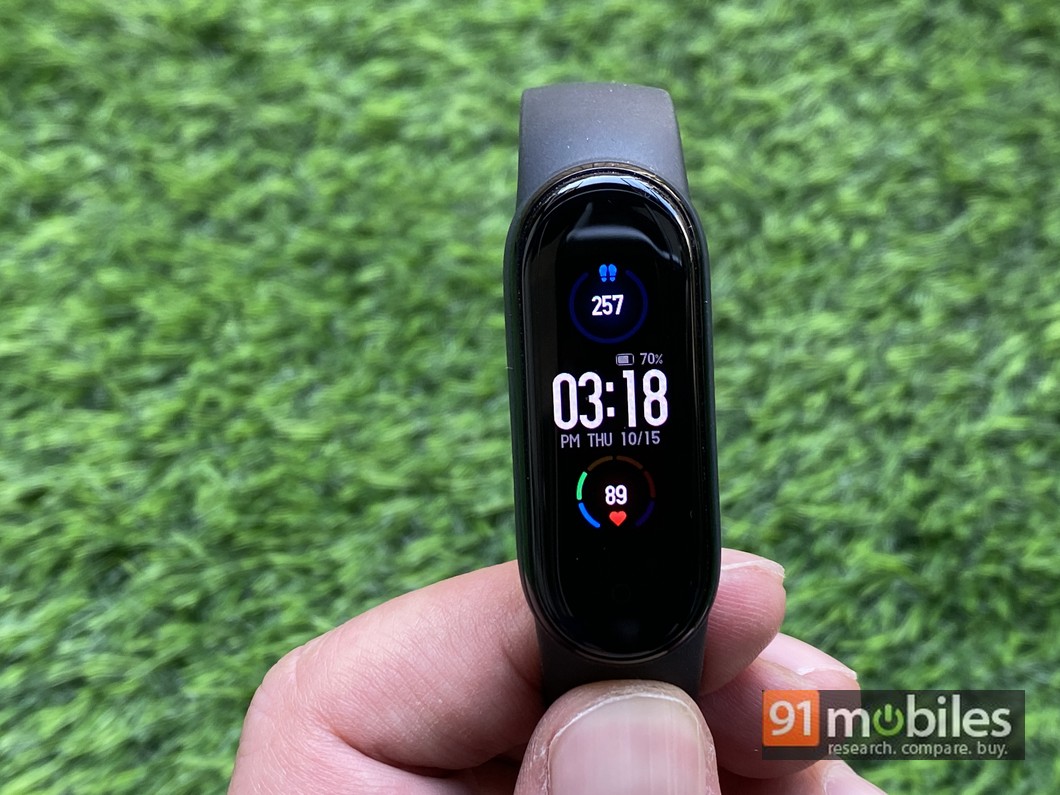 Both are reasonably bright and very visible in daylight, with options to get more watch faces from the app. However, the Mi Band 5 seemed to have better watch faces and slightly brighter colours. But that is a purely personal preference here. Am sure OnePlus will catch up in the face stakes in the coming days.

Broadly similar features and functions too

In terms of feature set, the two bands again seem very similar. Both have sensors for sensing heart rate, counting steps, and monitoring sleep. They also track specific physical activities. Some of the data is visible on the band itself and some on the companion app – OnePlus Health and Mi Fit – on the paired phones. The OnePlus Health is currently an Android-only affair, but Mi Fit is available for both Android and iOS devices. 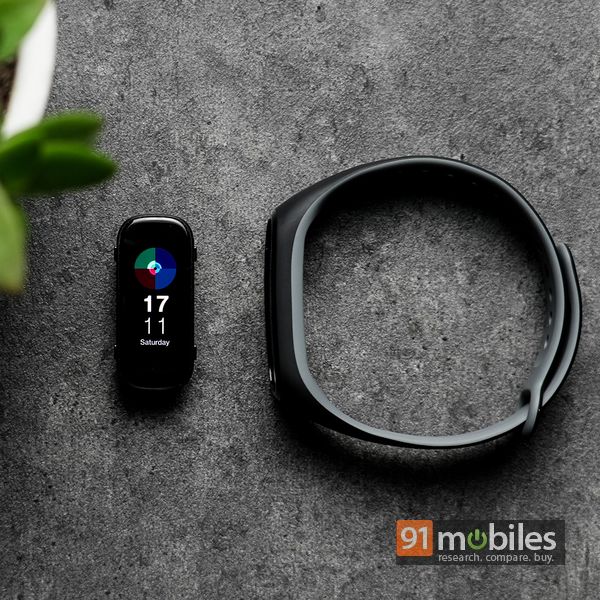 There are differences too, though. The OnePlus Band comes with blood Oxygen tracking and also tracks sports like cricket and badminton, whereas the Mi Smart Band sticks to conventional exercises (both track Yoga, though). On the other hand, the Mi Smart Band has menstrual cycle tracking and also has a system for measuring stress as well as a “personal vitality index” (a wellness and activity measure which calculates your fitness and activity levels and recommends activities), which the OnePlus Band lacks, at the time of writing. Yes, we know blood oxygen is a big deal in these COVID times, but cycle tracking and stress measurement give the Mi Smart Band the edge here again.

When it comes to real-life usage, both devices turned in very good performances. Heart rate and step counts were generally accurate, and fitness tracking was also more or less on point, although I could not test the sport and swimming options. The blood oxygen readings from the OnePlus Band were occasionally a little on the higher side (I got a few 100 percent readings, which has never happened with a proper Oximeter), but they were more often in line with what we got from proper instruments.

Sleep tracking was a little hit and miss with the OnePlus Band, though, with the band sometimes not registering when I had dropped off – even though I am a light sleeper, I was credited once with having slept for barely a couple of hours, which was well nigh impossible, but again, this was a one-off. I do not know how accurate stress monitoring is, but the Mi Smart Band 5 did get me a little conscious of checking for it, and I missed a similar option on the OnePlus Band. Of course, that could be just me. I do know however that the absence of menstrual cycle tracking could be a deal-breaker for many of my acquaintances of the opposite sex.

Both bands claim to offer two-week battery lives, but that really depends on how much you are going to push them. Keep the brightness turned up, and keep heart rate monitoring constant and you will see the battery lives dip to closer to a week or ten days. I found the Mi Smart Band 5 doing a slightly better job here, getting close to a dozen days, while the OnePlus Band gets through a week (and that could be lower if we keep the blood oxygen monitoring on all the time). I suspect that is because the Mi Smart Band 5 actually has a bigger battery – 125mAh as compared to 100mAh on the OnePlus Band. 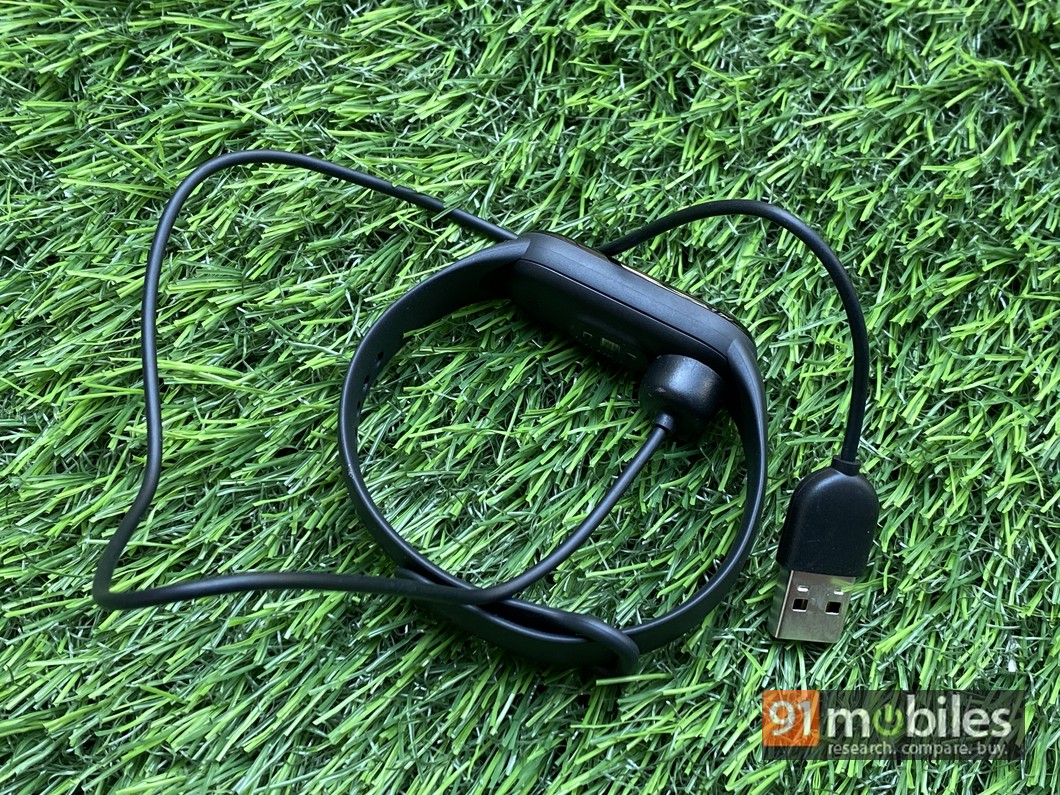 The chargers of both devices are different as well, with the Mi Smart Band 5 (above) having a much smaller charger that allows you to charge it even with the strap attached. The OnePlus Band however has a separate case-like charger (as pictured below), which means you need to remove the tracker from the band to charge it. Considering that this is something you would be doing barely 2-3 times a month, we do not think it is a deal-breaker, but yes, the Mi Smart Band has an edge here. 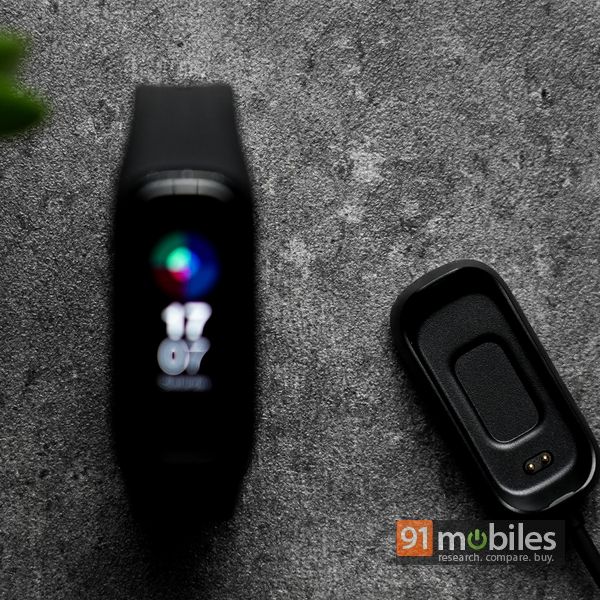 You and I take a look at the UI 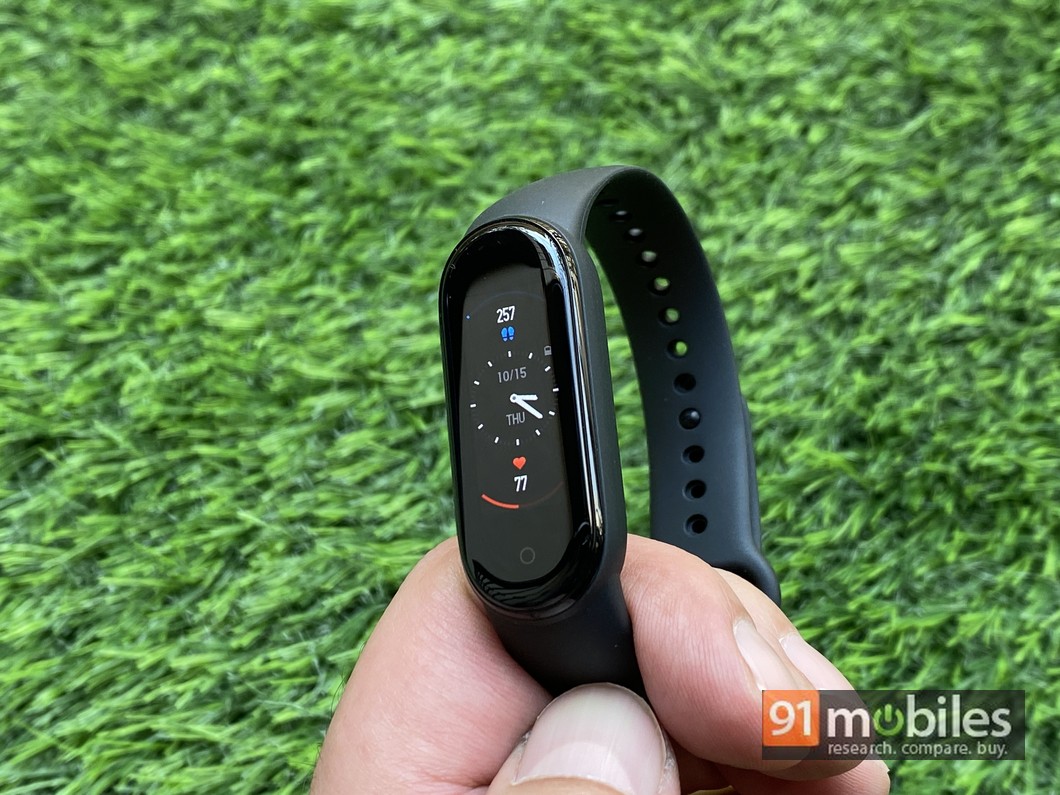 The interface is broadly similar on both bands and is a blend of touch, taps, and swipes to reach different features. Both are relatively smooth to use. The Mi Band (pictured above) however has a slight edge in the fact that it actually has a wake-up touch button at the base of the display, so you actually can actually wake up the display if it switches off without having to move your wrist. The OnePlus band does not have this facility. Yes, both have the raise-to-wake option but I actually ended up liking the certainty of getting the band awake when I tapped the button of the Mi Smart Band 5. Generally, a tap anywhere on the OnePlus Band was good enough to wake it up as well, but it was a little hit and miss. Speaking of misses, the OnePlus Band also had a curious habit of insisting that I wear it more tightly often when I checked my current heart rate or blood oxygen – the odd part was that it did not stop it from recording the same data in the background. Methinks this be a random bug.

If the interface is similar on the bands, it gets rather different on the phones. OnePlus Health and Mi Fit clearly come from two very different design ethos. The OnePlus app is a little more sparce and is likely to appeal to those who do not like much clutter, whereas the Mi Fit app is more feature-heavy. I personally prefer getting more information – the Sleep tracking section is a particularly good example of this – so I preferred the Mi Fit app, but again, this is a matter of preference.

Getting them notifications from the phone 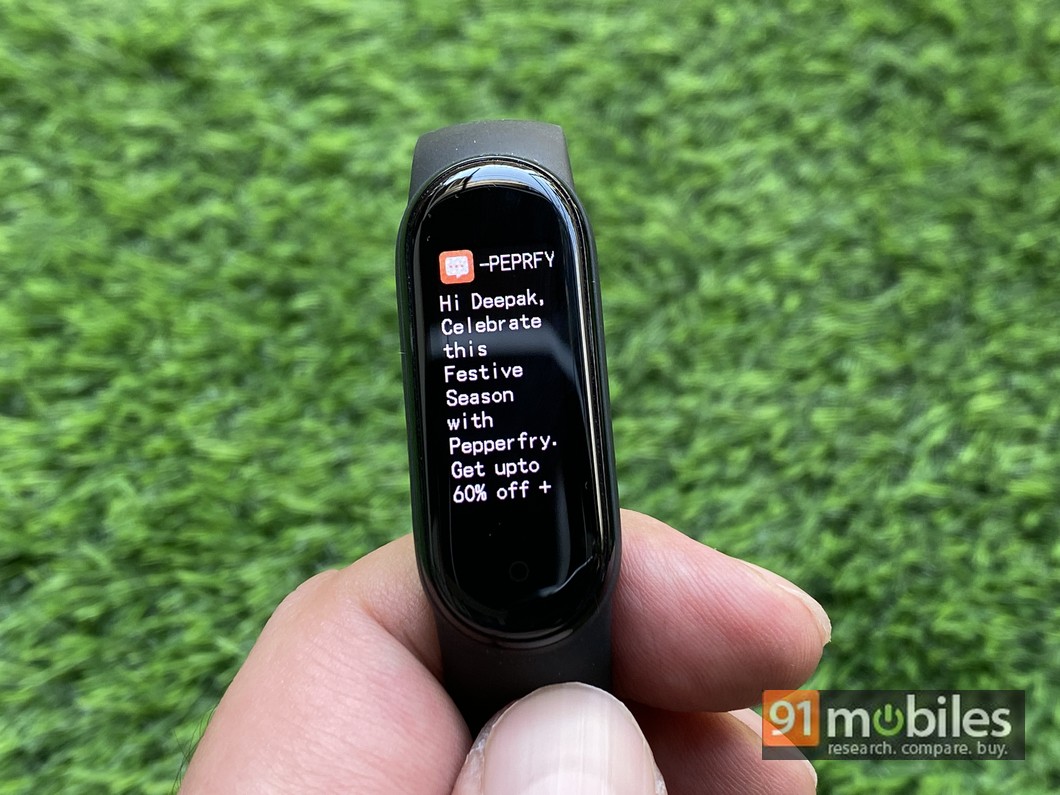 At the time of writing, we must confess that the Mi Smart Band 5 has an edge over the OnePlus Band. It simply seems to have its sensors working better at the time of writing, with the OnePlus tripping up occasionally. Of course, the OnePlus Band comes from the house of OnePlus, the lords and masters of terrific updates, so we would not be surprised to see it get better with time. And well, what cannot be denied is that in these Covid times, the blood oxygen monitoring option from OnePlus is a handy one. I can also see those who prefer cleaner interfaces and want brisk notifications preferring the OnePlus product. That said, the better battery life of the Mi Smart Band 5 and its support for women’s cycle tracking tilt the scales in its favour.

Both are pretty good in my book, but I would go with the Mi Smart Band 5 right now. Mind you, an update or two (or three) might make me change my mind!