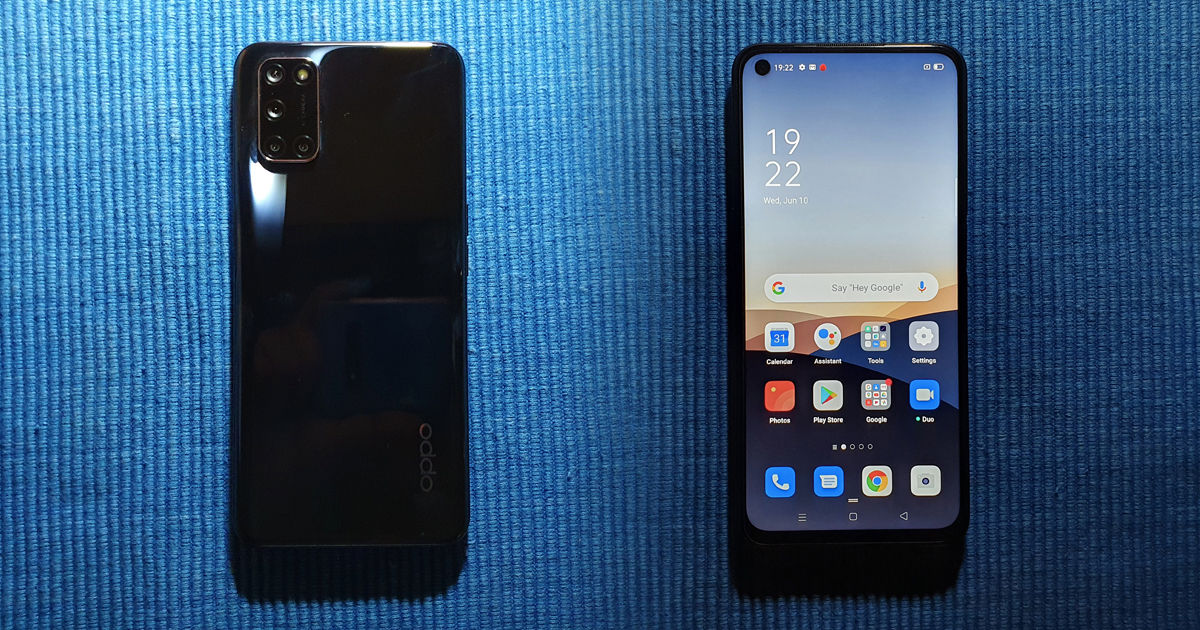 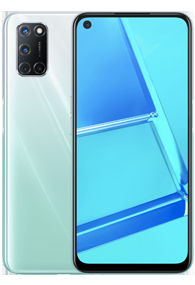 While the F series and even A series smartphones from OPPO have a sizeable fanbase, the brand’s name doesn’t come to mind first when one refers to the affordable segment. Brands like Realme, Xiaomi, POCO, and to some extent even Samsung are the strong players there. The OPPO A52 that was launched a little over a month ago, and retails currently at Rs 16,990, falls bang in the middle of this same segment. Let’s see how it fares. 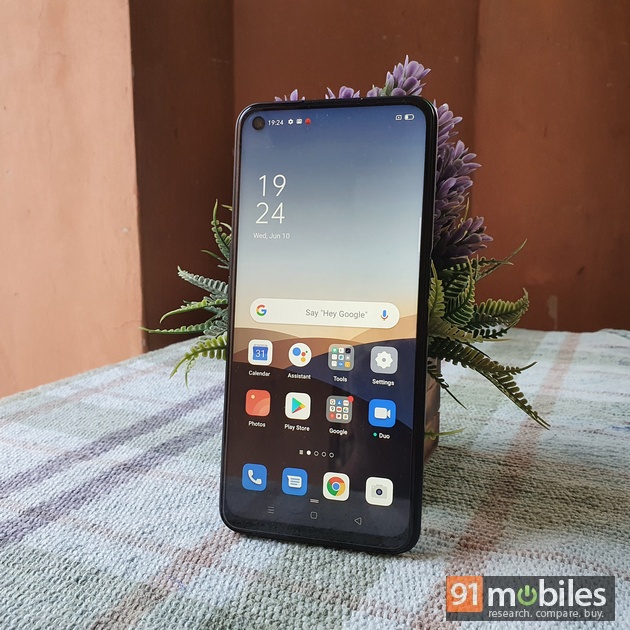 On the face of it, the OPPO A52 uses much of the design language seen more recently on the Realme 7 (review) and 7 Pro (review). It’s the same unibody polycarbonate design with curved edges at the back and an L-shaped camera housing. Instead of a matte finish, there is a glossy finish to the device which attracts a lot of fingerprints, but OPPO does provide a clear silicone case inside the box. The A52 does not have a lot of weight to it and has a relatively narrow design giving it an easy one-handed use. I have received the Twilight Black colour variant which has more of a bluish tinge than black, but it is still a pleasing device to look at. As for the ports, the device packs in all the standard stuff such as the Type-C port, 3.5mm headphone jack and a speaker grille. Volume rocker and power button are present on either side of the phone. Incidentally, the power button also doubles up as the fingerprint scanner as well. 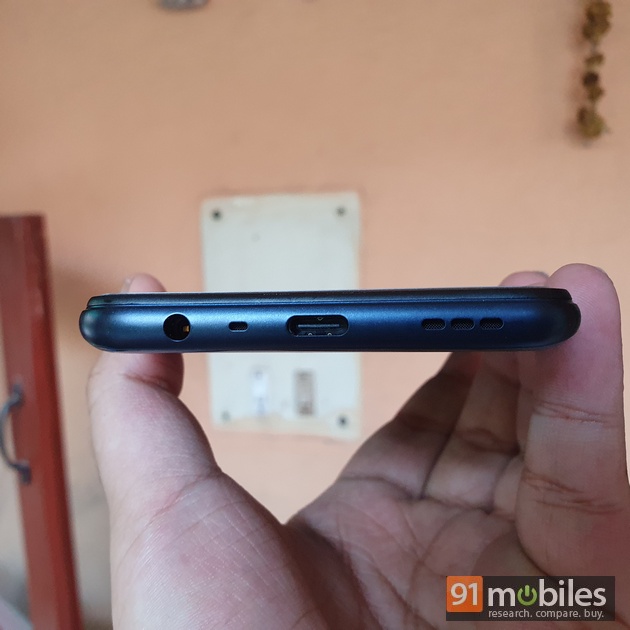 As for the display, the A52 has a 6.5-inch FHD+ (2,400 x 1,080) IPS LCD panel with a 20:9 aspect ratio and a standard 60Hz refresh. OPPO has used the in-trend punch hole camera for the selfie shooter. The A52 has a standard LCD display which has shallow viewing angles and a bit of backlight bleeding around the punch hole. Colours are contrasty but in a nice way and the panel does achieve a high amount of brightness for a good outdoor viewing experience. The basic customisation options are present such as adjusting the colour temperatures and turning on Dark mode and eye-care mode. 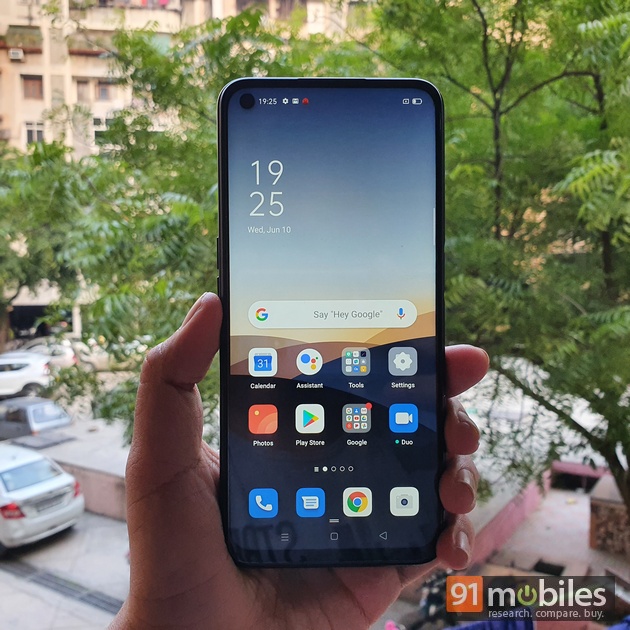 At the helm of the A52’s shooting experience is a familiar quad-camera setup but the resolution of the sensors fall behind the competition. It has a 12MP primary sensor along with an 8MP ultra-wide sensor, 2MP macro camera and a 2MP depth camera. 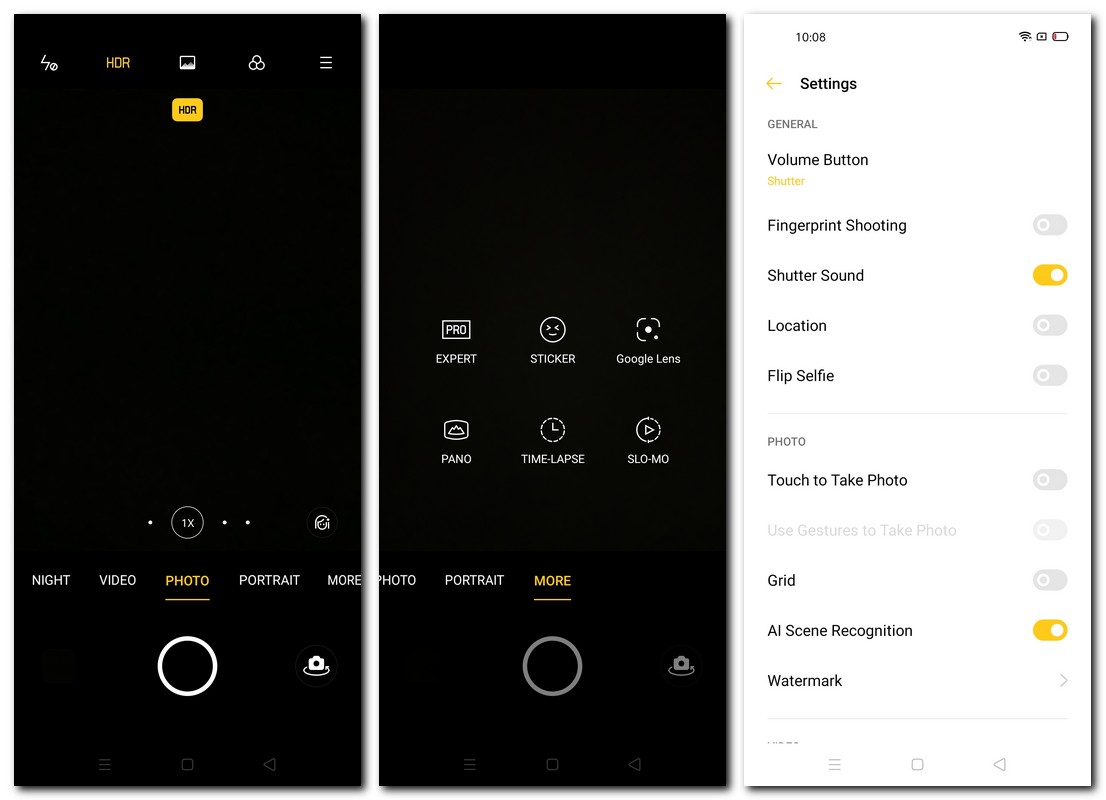 You get the standard run of the mill shots from the A52’s primary lens. In my opinion, the colours were slightly dull and the lens was not able to pull of shadows quite as I had expected. The dynamic range and exposure were up to the mark. At night the sensor over-smoothened the details at times, and there was an unnecessary amount of noise also creeping in. Most of the problems are taken care of by using the Night mode. However, it requires you to be incredibly still or the photos turn out blurry and out of focus. Other sensors performed just about good but I did see a much softer focus on the wide-angle shots. The macro sensor churned out passable photos at the cost of bad colours. The 16MP selfie shooter employs the choicest facial smoothing that I have been accustomed to on an OPPO smartphone. 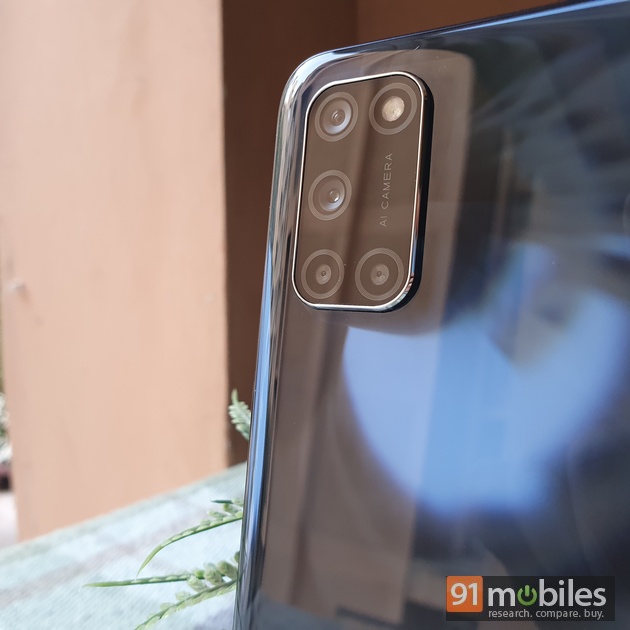 Under the hood, OPPO A52 has not made huge strides and decided to keep it low-key as compared to several other phones in the same price range. There is the Snapdragon 665 chipset which is fairly old now and was seen first last year back in February. It is supported by a maximum of 8GB RAM and 128GB of internal storage which is expandable. Benchmarks don’t paint the best picture with the device getting scores of 182,558 on Antutu and 308 and 1,344 on Geekbench’s single-core and multi-core tests respectively. PUBG Mobile (now banned in India) will not run on HD graphics, but gets maxed out at Balanced with High frame rate options. Basic tasks such as app switching, keeping heavy apps open in the background, multi-tasking and more can be done effortlessly. 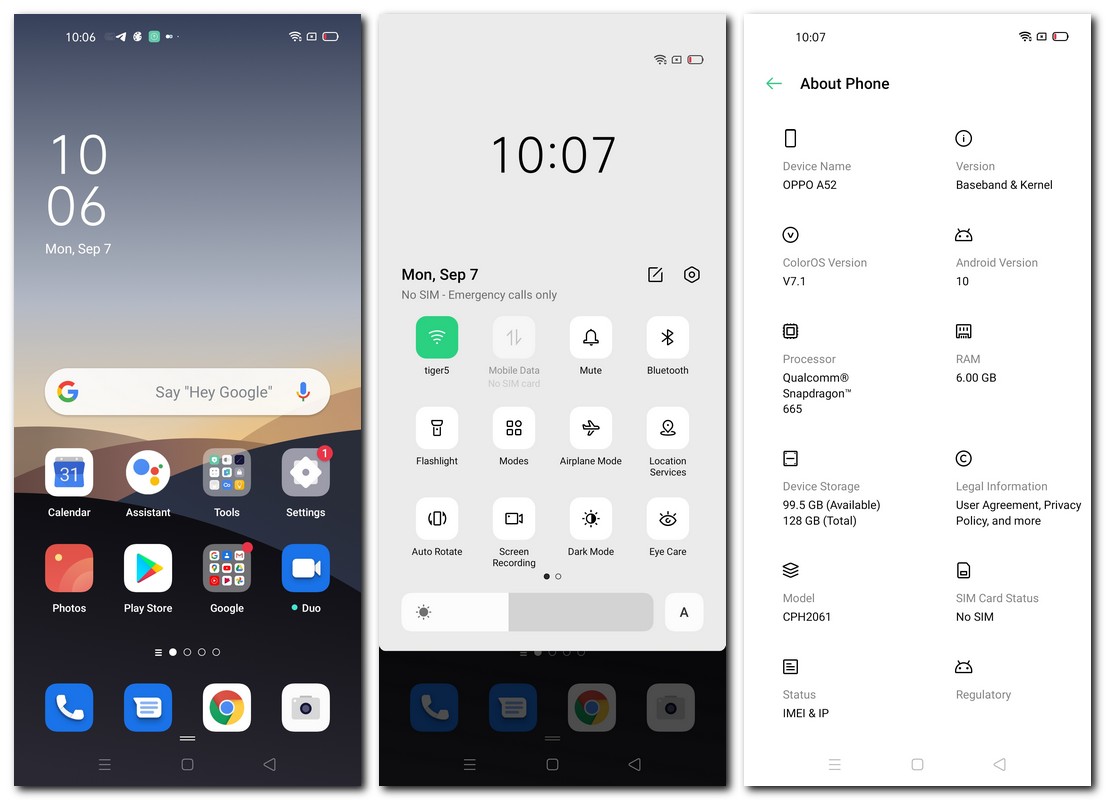 On the software front, the device gets the latest ColorOS 7.0 skin which is based on Andriod 10. OPPO has refined its UI overtime to give a more clean look with significantly less bloatware. You will be getting more of the same with the OPPO A52 and you can read about it in detail in my colleague’s OPPO F17 Pro review. 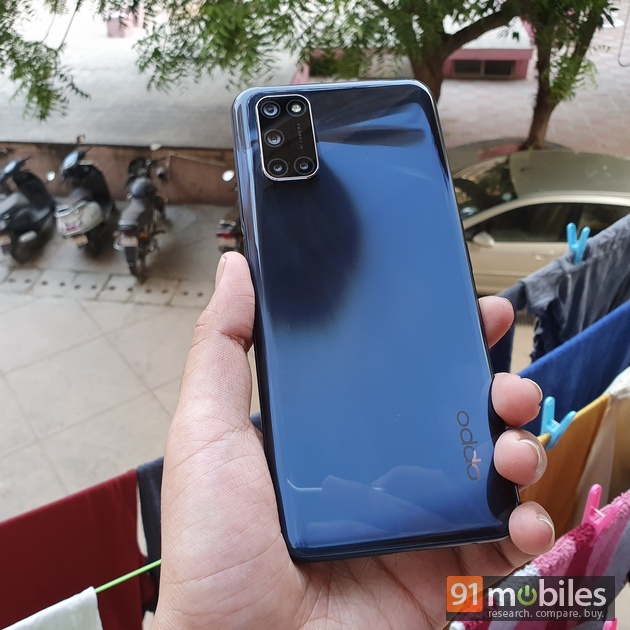 On the battery front, the A52 packs in a massive 5,000mAh battery which supports fast charging at 18W. The device pushes past the one-day mark with relative ease although charging this hunk of a battery takes about 2 hours. Normal usage, excluding any intensive gaming, can push the device, to nearly one and a half-day but only on Wi-Fi. On mobile data the device gets drained quite fast. 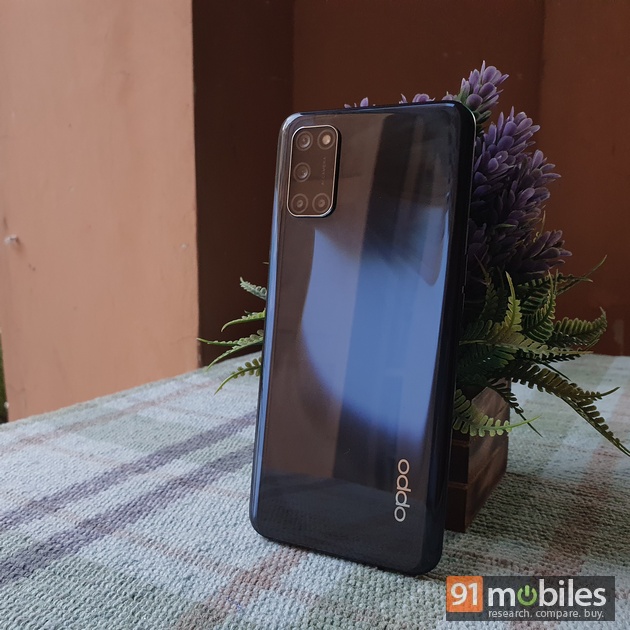 The OPPO A52 might have been a good choice of purchase earlier, but now with the launch of Realme 7 and the POCO M2 Pro (review), it seems like a hard sell. For users looking for a trendy design, the OPPO A52 is a good choice, but in every other category the device falls short against its competition.