“From the under-display fingerprint sensor to the AMOLED panel, the OPPO K1 offers impressive features at an affordable price”

Just two years back, there were leaks and rumours about both Samsung and Apple struggling to include an in-display fingerprint sensor on their phones. Vivo eventually turned out to be the first brand to offer a fully-functional in-display fingerprint sensor in a phone. Fast forward to 2019, and we have several phones from OPPO and Vivo to feature this technology. Even OnePlus got onboard with the launch of OnePlus 6T (review). However, as this tech was still largely limited to select mid-range and premium phones, everyone was surprised earlier this year when OPPO unveiled its K1 smartphone sporting an under-display fingerprint scanner at an extremely affordable price. If we put aside this unique distinction, does the phone make for a good daily driver? Read on my full review to get your answer. Apples don’t fall far from the tree, do they? The OPPO K1 comes with a design reminiscent of OPPO’s own F9 Pro (review) and A7 smartphones. Having said that, I found the gradient colour design, Astral Blue in my case, not too flashy for my taste. I actually liked the use of dark blue and purple shades on the back to a certain extent. However, the plastic casing around the dual camera module, placed on the top-left, stood out like a sore thumb to me. OPPO did a brilliant job of keeping things minimalistic with the K1 as there is no inscription at the back apart from the company’s branding in the middle. 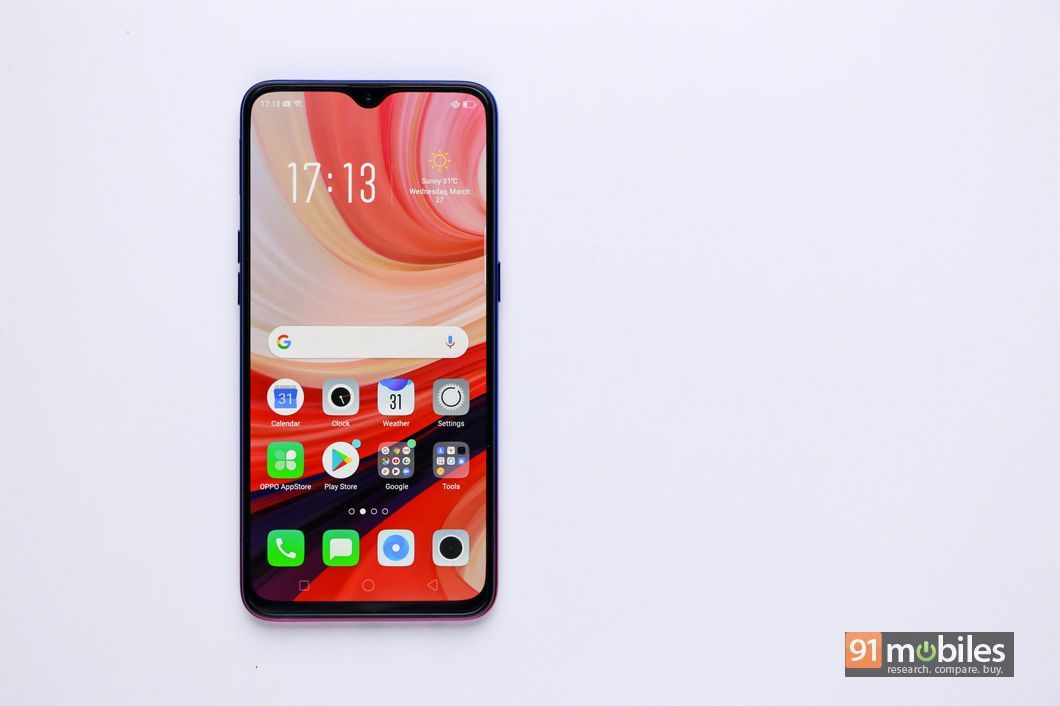 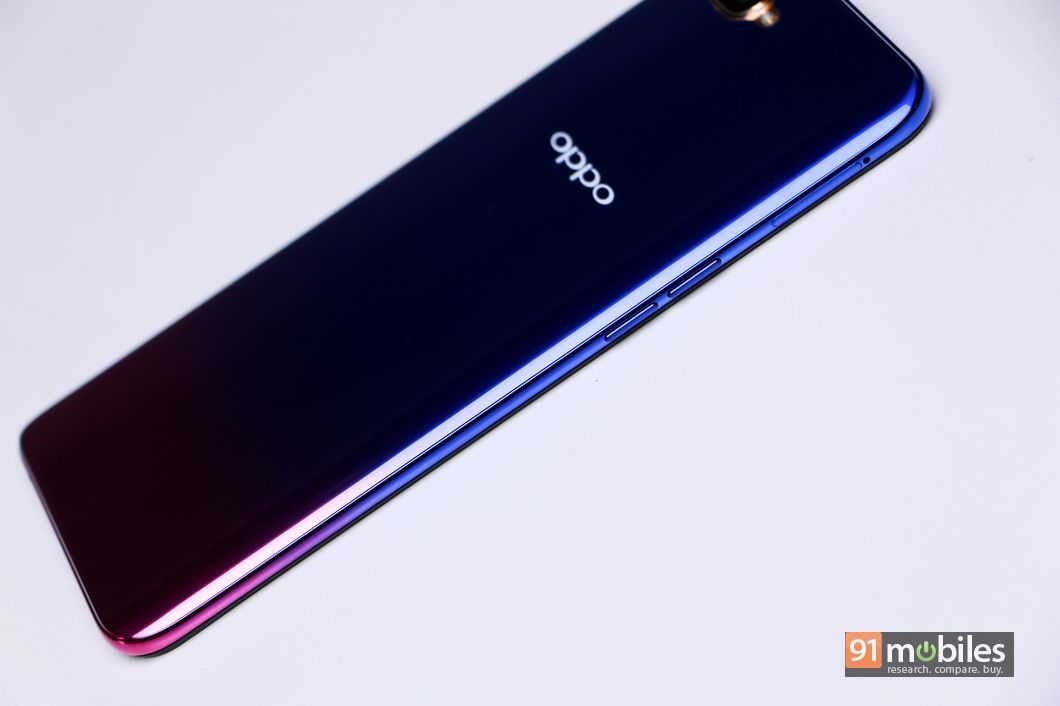 The bottom of the phone holds speaker grilles on the left side, a 3.5mm audio jack on the right side, and unfortunately a micro-USB charging slot in the middle. This brings us to the elephant in the room. In 2019, almost every brand has switched to USB Type-C with their mid-range offerings and OPPO’s new offering lags behind on this front. For what it is worth, the phone was launched in October last year in China, so we cannot entirely blame the company for this choice either.

Let’s talk about the panel at offer here. The OPPO K1 comes with a 6.41-inch full HD+ AMOLED panel. To be honest, as an AMOLED panel is necessary for the inclusion of the in-display fingerprint sensor, the brand did not have much choice in this department. Samsung recently launched its A series and M series phones in this segment but prior to those, there were not many phones with AMOLED panels in this price range. 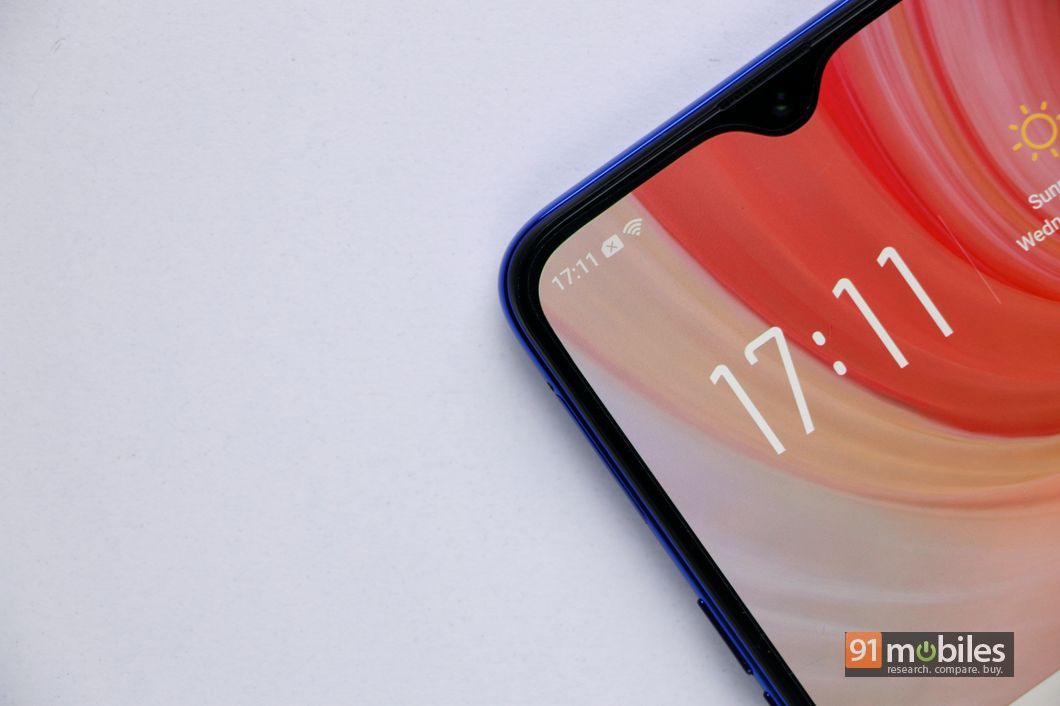 Coming back to the display on the OPPO K1, the handset comes with a dewdrop notch design, with the cutout featuring the front camera and earpiece right above the sensor. The in-display fingerprint sensor is located in the bottom half of the panel. We’ll come to its performance later on in the review. 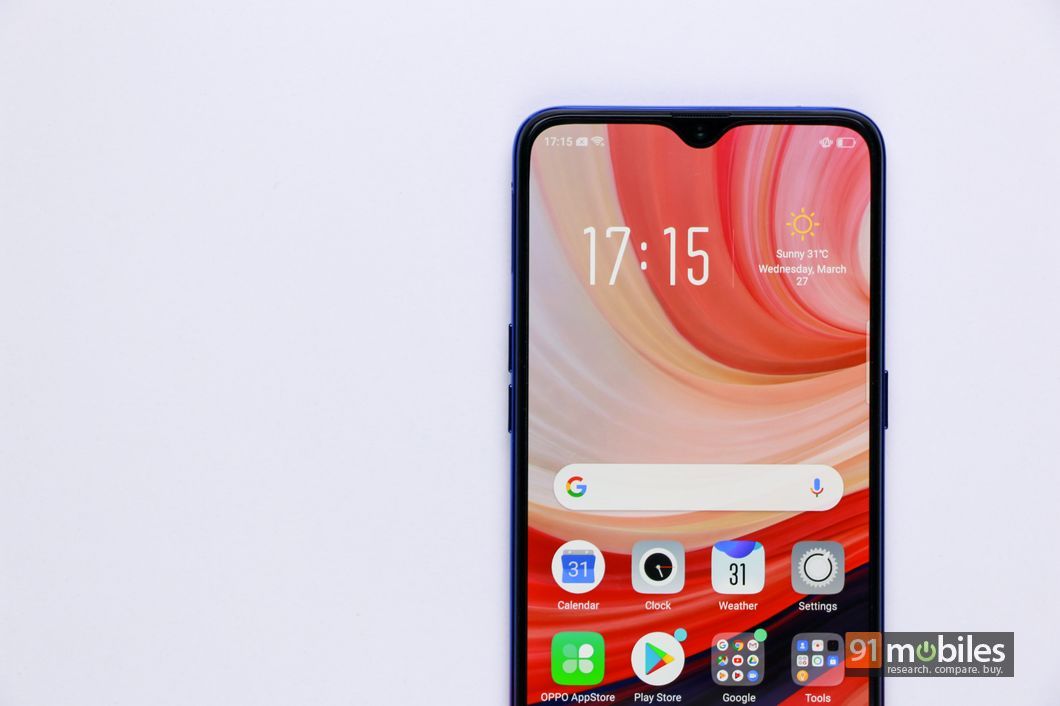 The panel itself is quite vibrant and crisp. There were no issues using the phone outdoors as the display gets sufficiently bright, irrespective of cloudy or sunny conditions. The viewing angles are good and I didn’t face any colour-shift issues too. Here’s a closer look at the design:

To get the camera specifications out of the way first, the OPPO K1 comes with a dual camera setup at the back, consisting of a 16MP primary sensor and a 2MP secondary sensor, assisted by an LED flash for better pictures in poor lighting conditions. For selfies and video-calling, the brand has included a rather generous 25MP sensor at the front, which resides in the water drop notch up front. Now that we have discussed the optical hardware at the offer, it will only be fair to consider the software that supports these modules, before we jump to the real-world performance. 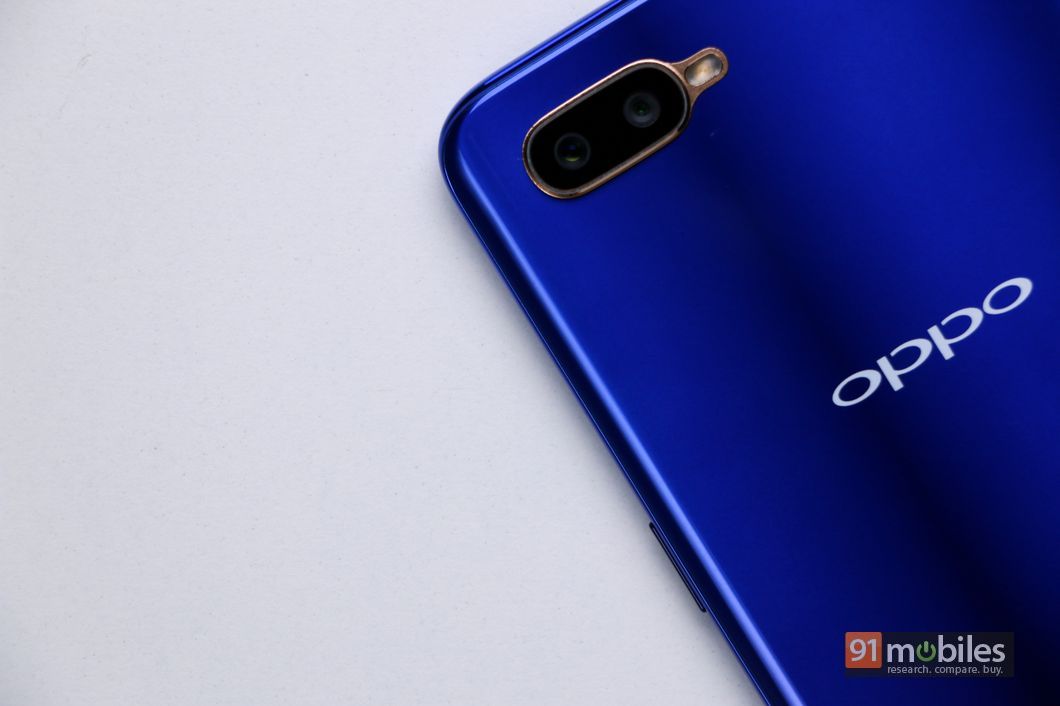 In the default camera app, you are treated to a familiar interface if you have used any OPPO phone in recent past. There is a default ‘Photo’ mode with options like HDR, flash, beauty mode, and aspect ratio. If you swipe left or right, you get other shooting modes like Time-Lapse, Video, Portrait, Sticker, Pano, and Expert. In the Expert mode, you get to tweak ISO levels, white balance, and shutter speed to ensure you get the best picture possible in the respective environment.

Now, with the help of AI, the phone manages to detect the surrounding conditions and tries to adjust image settings automatically. In daylight pictures, the phone managed to capture details fairly well. I found the colour reproduction to be fairly accurate and even the dynamic range at offer was adequate. As far as the low-light conditions are concerned, the phone does not impress as there is still a lot of grain in pictures, however, the pictures do turn out to be passable.To put it simply, taking images in low-light scenarios is not the phone’s strongest suit. If we talk about video capture, the phone manages to record videos in up to 4K resolution, which is impressive. We found the videos recorded from the phone to be decent and if you are heading out for a trip, you won’t be disappointed by the video quality at offer here.

If we talk about selfies, in the pictures taken from front camera, there is visible smoothening going on, even when the AI beauty mode is switched off, which can get annoying. You can take bokeh shots from selfie camera as well, which is always a good thing. Here are a few camera samples.

ColorOS as an operating system brings along some mixed feelings, mostly because the platform doesn’t offer particularly useful features but still feels smooth and clean for most parts. However, as I pointed out in my Realme 3 review, v6.0 of the UI has brought along some nifty improvements. Unfortunately, the Android 9.0 Pie-based update has not yet arrived for the OPPO K1 and the phone runs ColorOS 5.2, which is based on Android 8.1 Oreo. 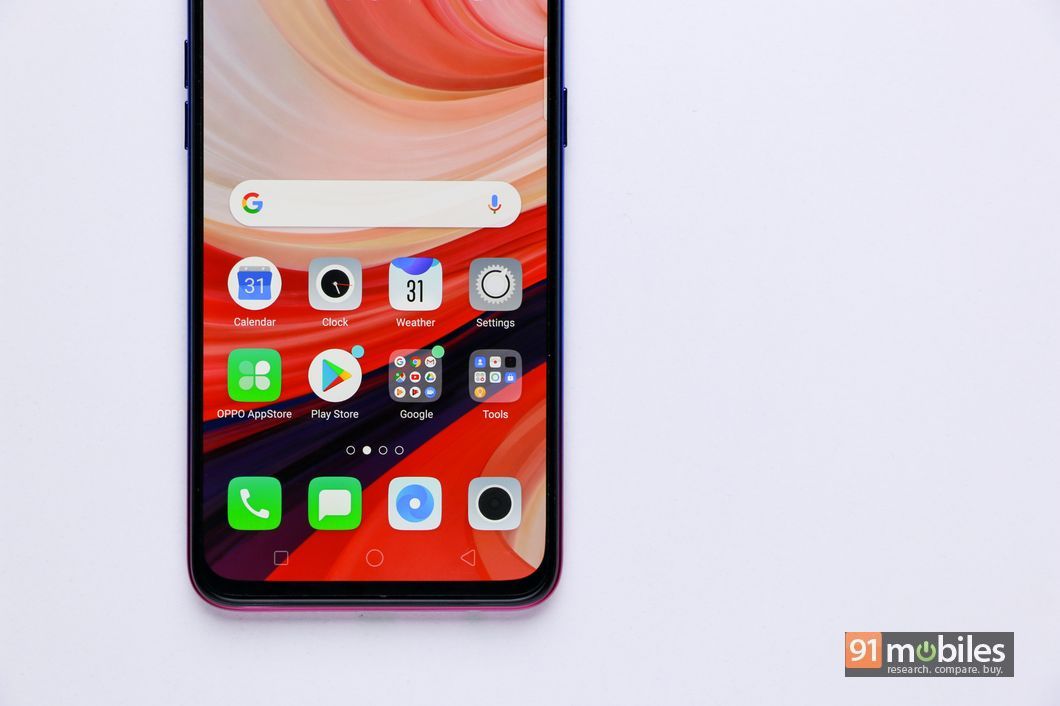 With the OPPO K1, the brand has gone ahead with a trusted chipset choice, i.e. Snapdragon 660. The handset comes with 4GB of RAM and 64GB of built-in storage, which is expandable up to 256GB via a microSD card. Now, this is where things get slightly tricky. For the sake of being completely impartial, just for now, let’s sideline the fact that Xiaomi Redmi Note 7, which is priced much lower at Rs 9,990, is also powered by Snapdragon 660 SoC. 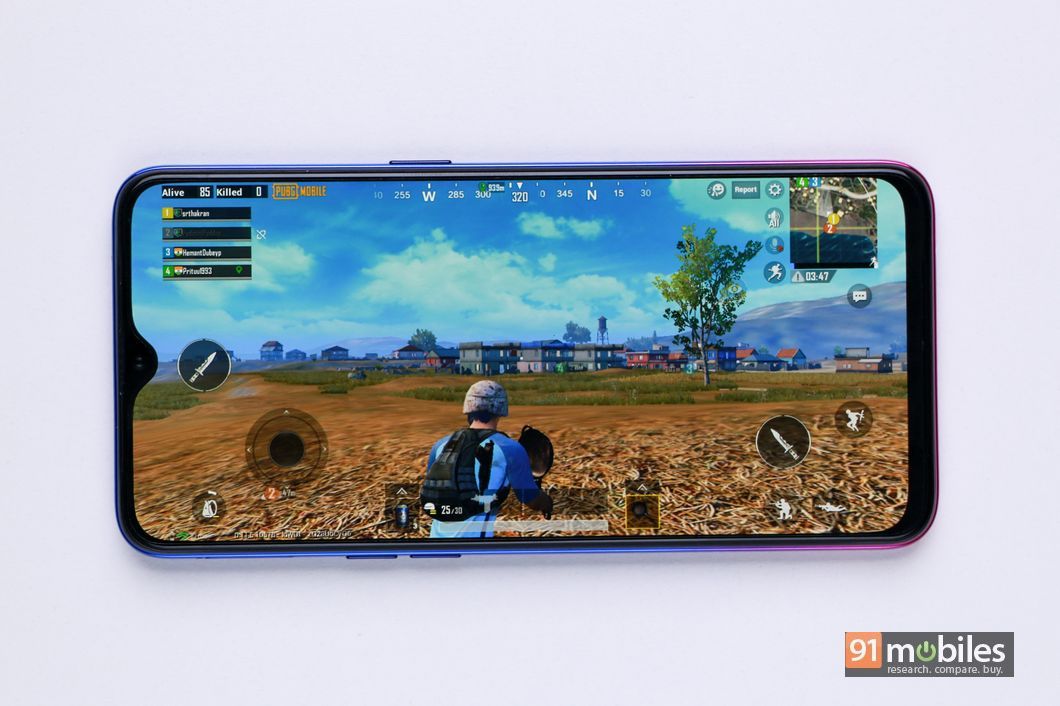 Although over the course of last year, I have used enough phones with Snapdragon 660 to present a well-informed opinion about the chipset’s capabilities, I tried playing different games ranging from PUBG to FIFA Mobile on the phone to make sure there are no surprises at offer here. Thankfully, there is no funny business going on. The phone handled these graphically-intensive games really well and even multitasking didn’t present any noticeable stutter issues. 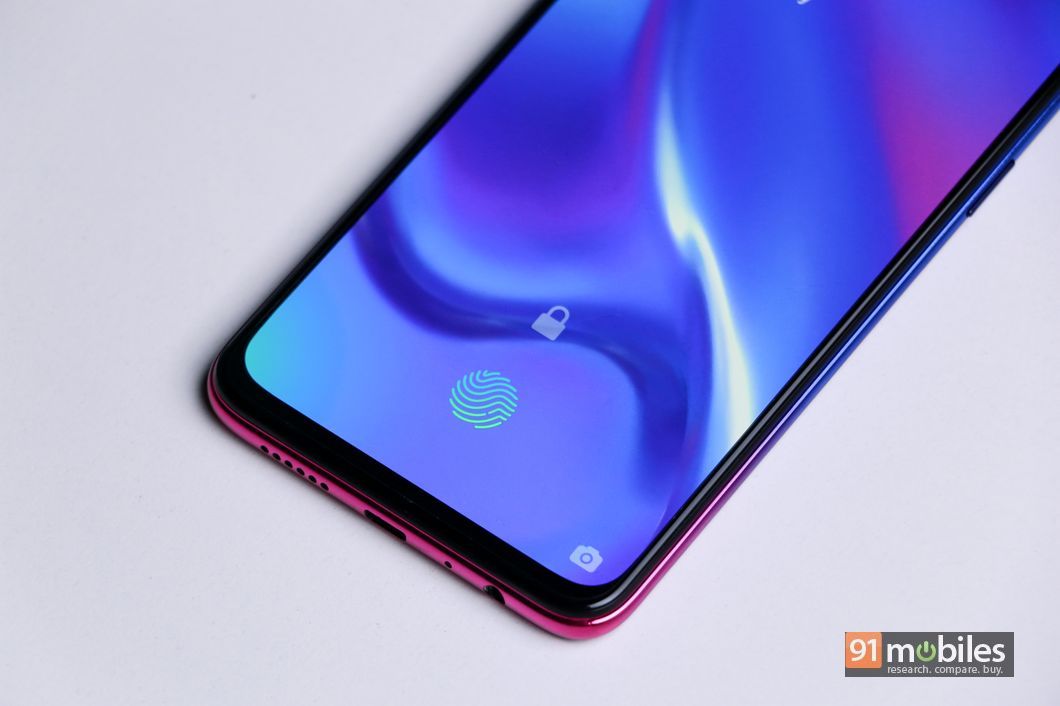 The OPPO K1 houses a 3,600mAh battery. Although the battery capacity does not look particularly impressive in comparison with some of the other handsets that you find in mid-range, there was no noticeable difference in the battery backup offered by the OPPO handset. One important thing to keep in mind is that the phone doesn’t support fast charging and it takes around two hours to charge the phone from 0 to 100 percent. 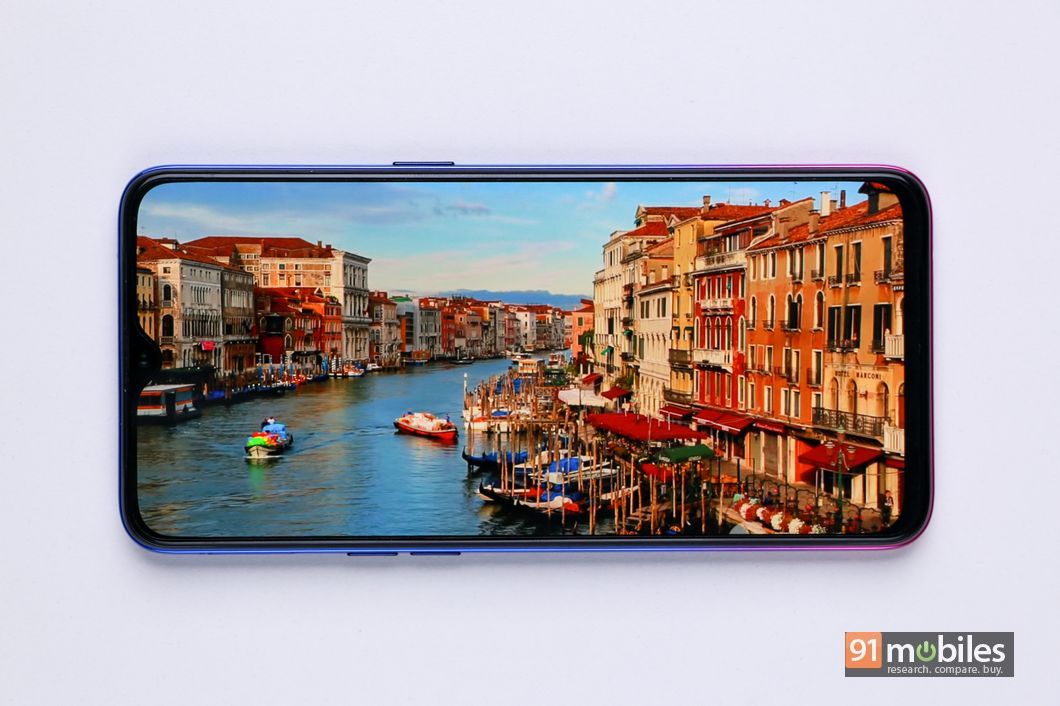 I managed to get around 4-5 hours of screen on time with the K1 and in our battery loop test, the phone managed to play an HD video for around 19.5 hours before running out of juice. To put it simply, if you are glued to your phone through the day, you might need to look for a power outlet by the evening but otherwise, you can breathe easy till the end of the day.

The OPPO K1 is one of those all-rounder phones that get many things right. The handset brings along an AMOLED display panel and an under-display fingerprint sensor at an extremely competitive price. However, with the availability of Redmi Note 7 Pro (review) at a lower price, it becomes hard for us to recommend the OPPO offering over Xiaomi’s. The Redmi Note 7 Pro, in comparison, comes with a better chipset, larger battery capacity, and better camera performance, all at Rs 14,999. Having said that, OPPO’s handset still retains the novelty factor that comes with being the most affordable offering with an under-display fingerprint sensor. If you also prefer AMOLED panel over an IPS one, things might swing in favour of OPPO K1 for you. If you don’t want to buy either of these phones, there is also Honor Play (review), which is now available at an extremely attractive price of Rs 14,999.