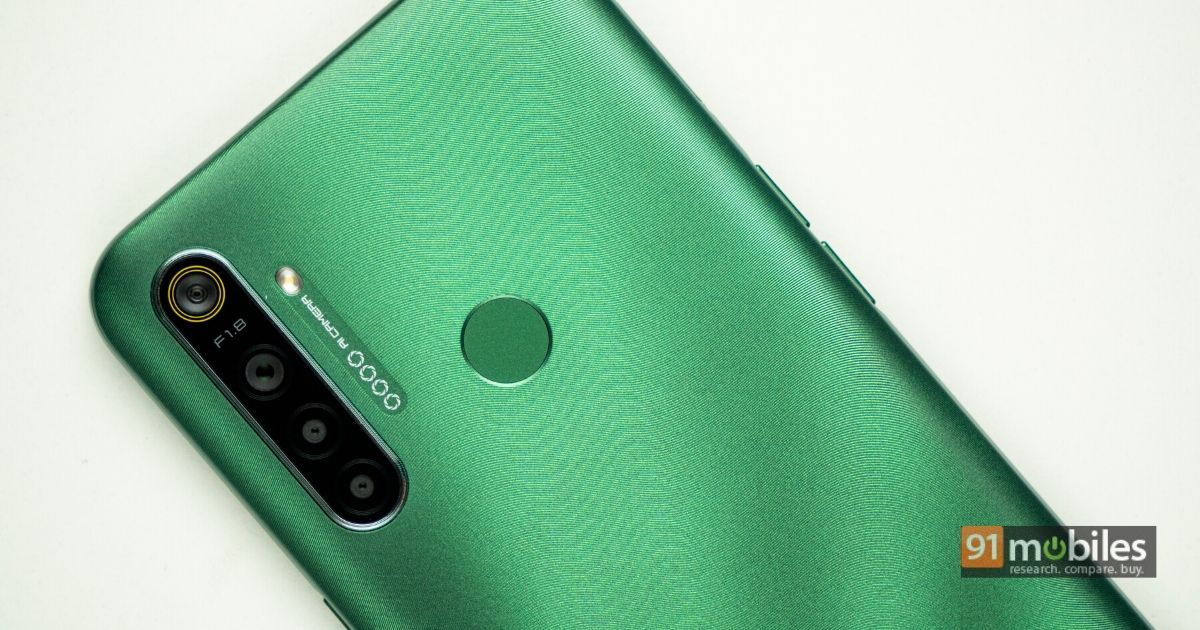 Realme went on a launch spree in 2019 and this year looks to be no different, with several smartphones and other devices rumoured to be in the pipeline. The Realme 5-series had been one of the most appreciated budget smartphone range last year and it would seem that the former OPPO sub-brand is keen on capitalising on this reputation. 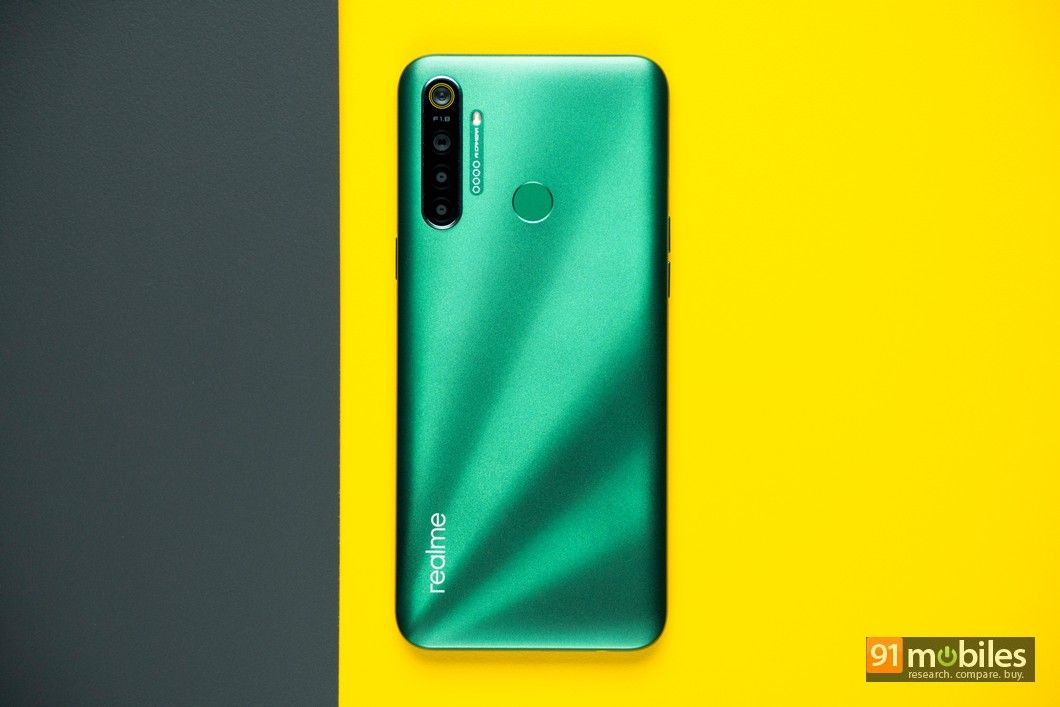 The Realme 5S (review) launched late last year was a slightly watered-down version of the Realme 5 Pro (review). Now a fourth smartphone in the lineup has been made available called the Realme 5i which, by all accounts, is all but identical to the Realme 5 (review) and will be replacing it. I got my hands on the Realme 5i, which starts at Rs 8,999, to make some sense of it and here is what I think. 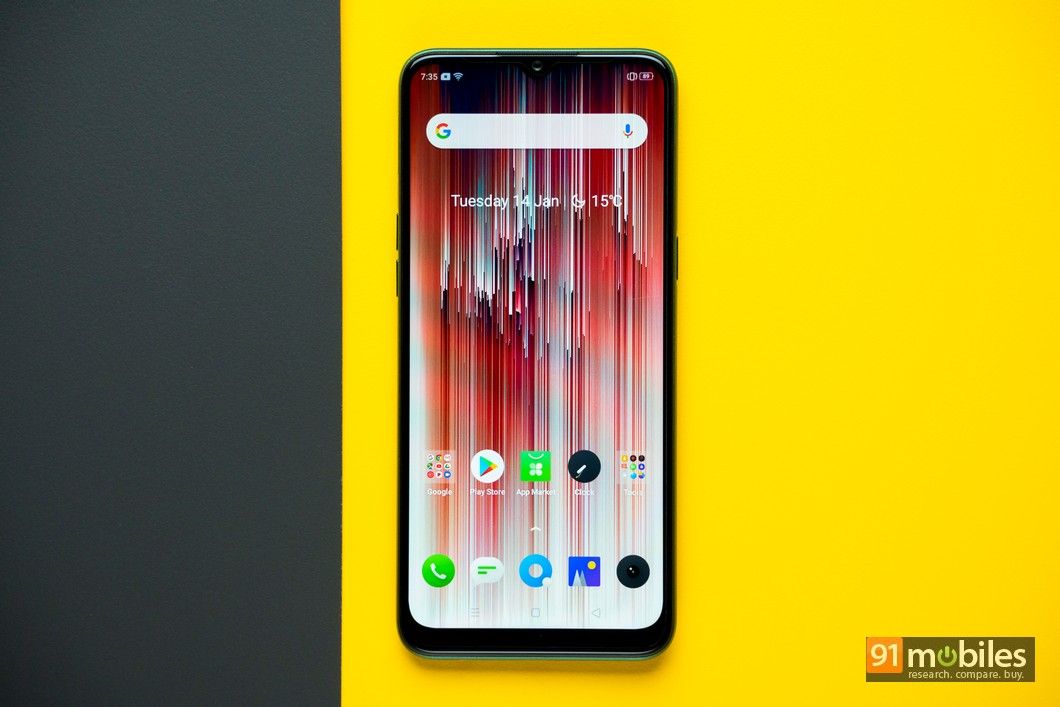 With nearly unchanged internals from the Realme 5, and but more RAM and storage for the base variant, the Realme 5i is undoubtedly a compelling phone in the budget segment. The only worthwhile competition to the device is the Redmi Note 8 (review) which is priced higher by a mere Rs 1,000.

Identical to the point you could easily swap one from the other without knowing the difference, the Realme 5i takes design cues from the Realme 5, all the way from the waterdrop notch on the front to the vertical camera module on the back. Oh wait, there is one difference – the texture on the back. The Realme 5i has opted for a unique sunrise design in place of the diamond-cut pattern on the Realme 5. The Realme branding is in the same place at the back, the frame is made from the same polycarbonate material, the fingerprint reader is at the same position and it has the same ports at the bottom along with the volume rocker 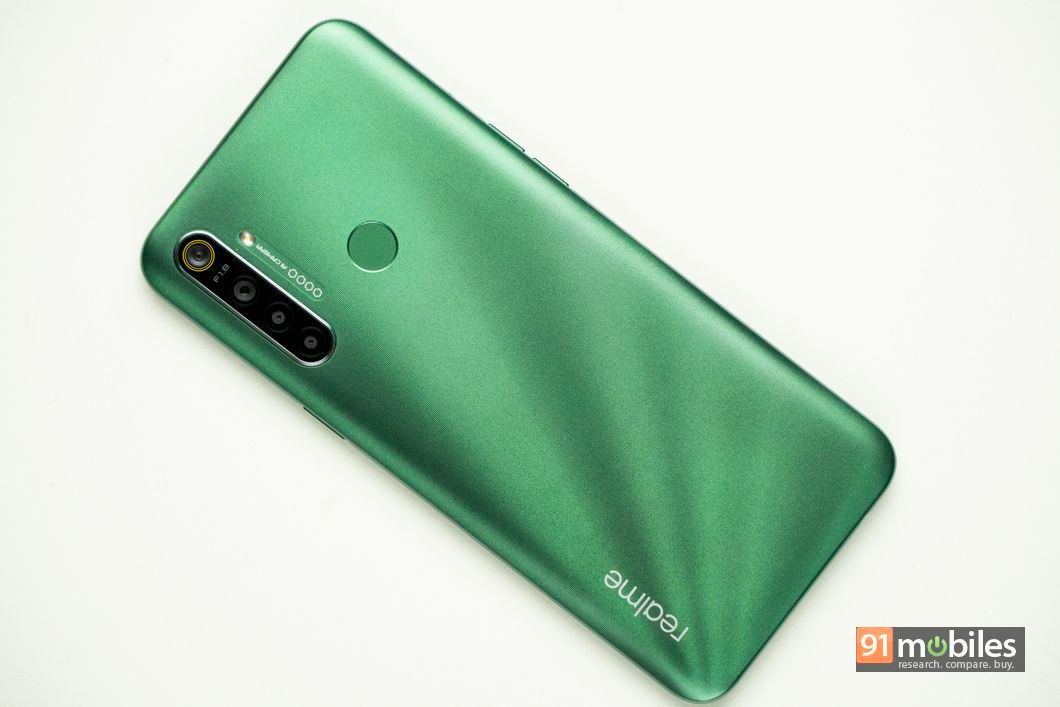 buttons on the left side and the power button on the right.

As far as in in-hand feel is concerned, the devices also have an identical weight ie. 198 gm, owing to the beefy 5,000mAh battery. That being said I can use the phone with one hand, which is generally not the case with phones that are large and heavy. This could be due to the curved back which helps provide a firmer grip on the phone. The Realme 5i comes in two colours, Aqua Blue and Forest Green, of which we received the former for review. The buttons are tactile enough for a budget device but they did appear to be slightly flimsy. The phone offers the user dual-SIM connectivity along with a dedicated microSD card slot. 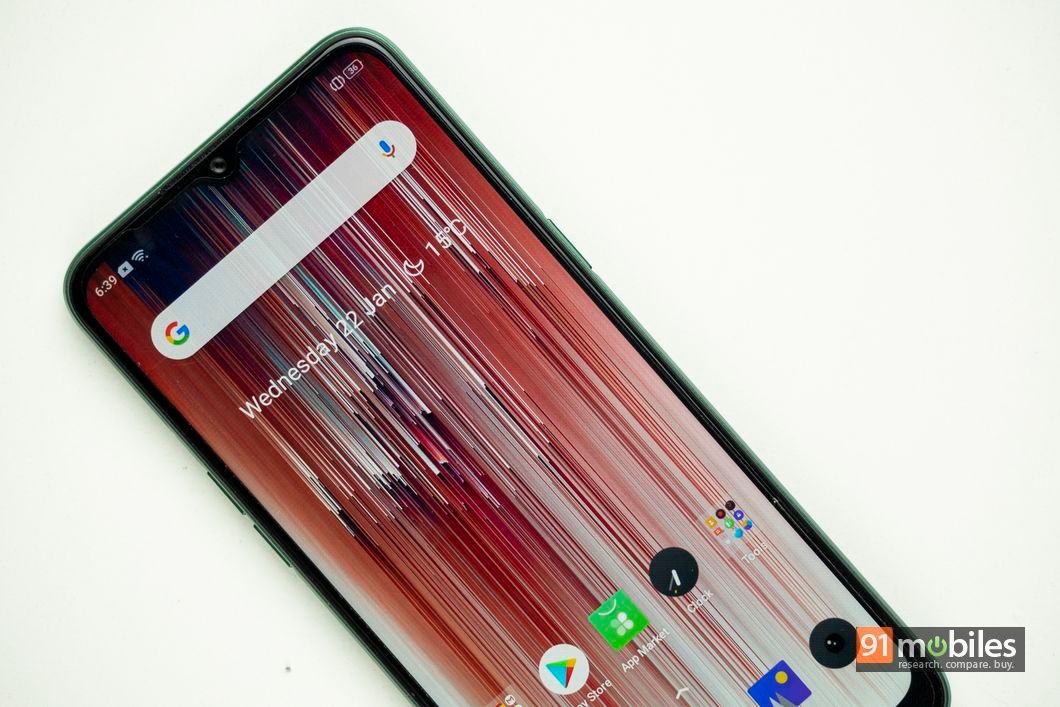 The display on the Realme 5i is a 6.5-inch HD+ IPS LCD panel, which is again the same as that of the Realme 5, and if you read our review of the latter you will get a fair idea of the new phone’s display quality. In summary, you will have no problem using the display in bright sunny conditions but it isn’t as punchy as say, the Redmi Note 8 and also there is no Widevine L1 certification, so you can’t view HD content on Netflix or Amazon Prime.

We have come a long way from dual cameras on a budget smartphone being considered a novelty, to phones that boast quad cameras under Rs 10,000. Realme was a pioneer for this trend with the announcement of the Realme 5, and the same camera has been ported on to the Realme 5i. Therefore, you get a 12MP primary sensor with an f/1.8 aperture along with an 8MP wide-angle camera with an f/2.25 aperture, a 2MP macro camera, and a 2MP depth sensor. 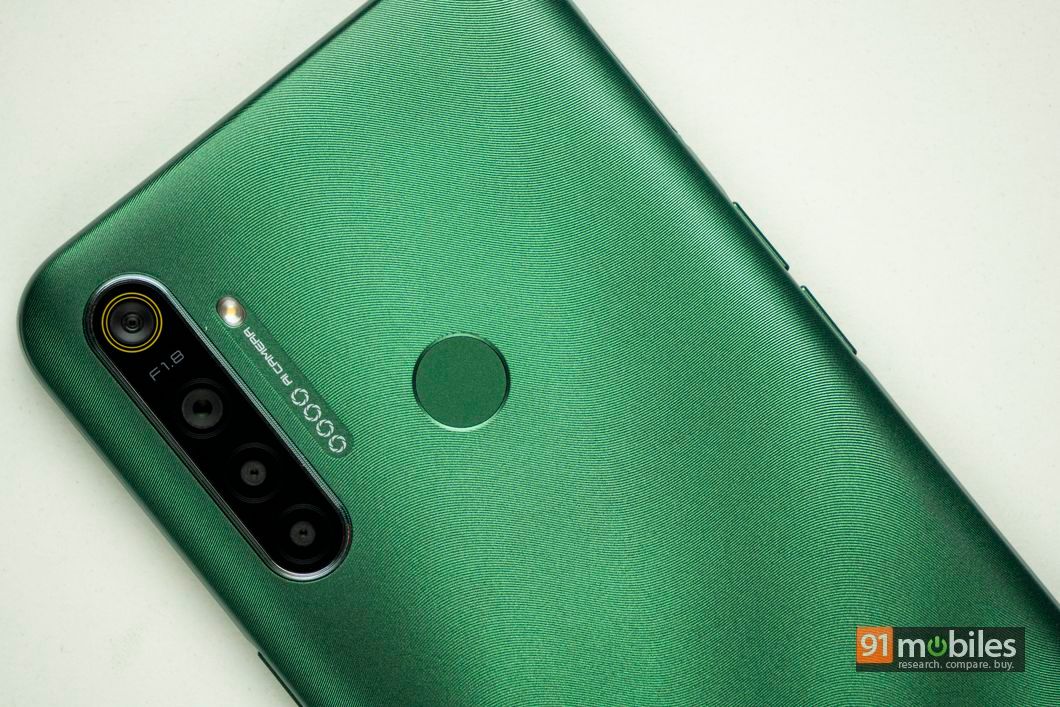 The overall UI for the camera app is quite simplistic and easy to use, although it would help if Realme could bring some of its camera features such as ultra macro into more prominence rather than let them remain buried under the quick toggle menu. As a budget phone, Realme 5i’s image capturing prowess is not its strongest suit but it does a decent job nonetheless. Daytime shots are vibrant, albeit a bit oversaturated. Dynamic range could be spotty every now and then (depending on where the sunlight is coming from) but overall it manages to impress in most situations. The details on each photo, even after zooming in, were to my satisfaction. 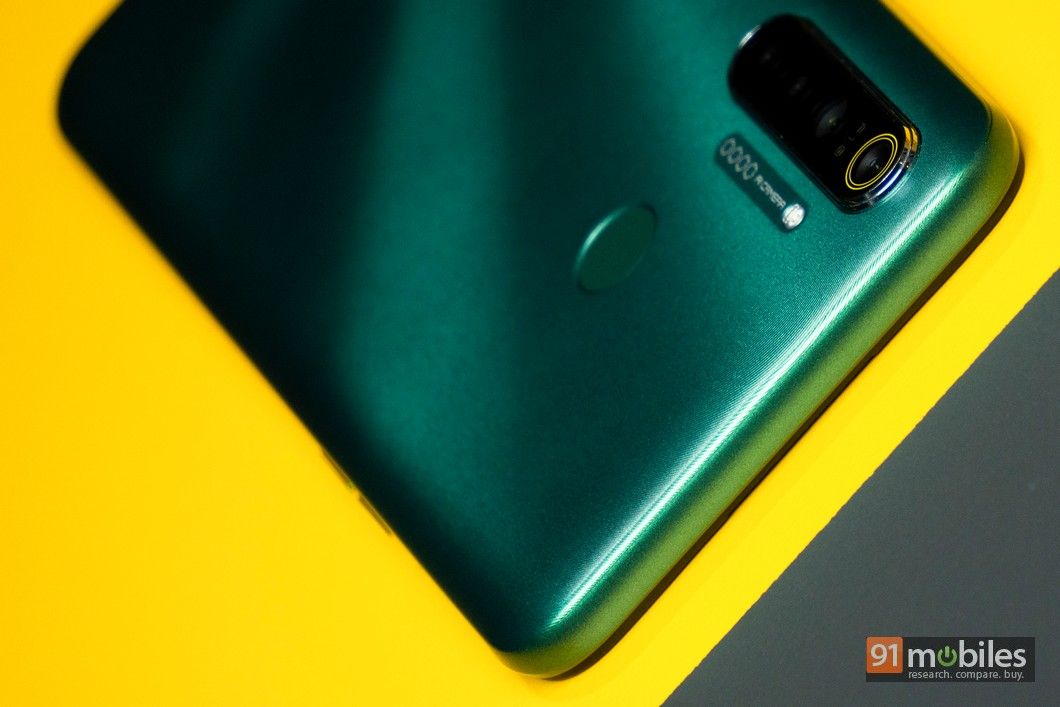 In comparison, images shot in the wide-angle mode show a bit of distortion at the edges, and with the lens being of lower resolution, the details captured appear soft on occasion. At night, the ultra-wide is just not usable. The macro mode is just about good enough to deliver detailed shots at a distance of about 4cm from the subject, but is bad at accurate colour reproduction which is a qualm we had from the Realme 5 as well. Then there’s the depth sensor which, in most cases, accurately judges the distance of the subject from the background to offer a nice bokeh shot. Realme also has a separate option that can be used to customise the amount of background blur on the subject which is nice to see.

As far as night photography is concerned, we see that the Realme 5i isn’t exactly on top of the game even for its price point. However, it is fair to say that for buyers this not something that will be a deal-breaker. Focusing at night is a  main issue for the Realme 5i, although the dedicated ‘Nightscape’ mode tries to alleviate some of the problems. Even so, photos tend to look grainy and there is a lot of noise in the dark areas of the photos. In general however, if you don’t zoom into photos you can get usable shots.

There is a 16MP selfie camera on the front of the phone which again is the same as seen on the Realme 5. Excessive face smoothening is a phenomenon that Realme phones have not fixed since the inception of the company but I guess there must be a wide market for it. Background separation on the front portrait mode is just about good enough.

The Realme 5i is powered by the same Snapdragon 665 SoC that powered the Realme 5. However, instead of starting at 3GB RAM + 32GB storage, the Realme 5i offers a 4GB RAM + 64GB storage variant for the same price. For its price, the 665 SoC, based on an 11nm manufacturing process, is quite a capable chipset and most users will have absolutely no complaints from the device. It handles multitasking well and has no problems running multiple apps in the background. It can run PUBG Mobile at medium settings, although the phone does get slightly warm during gameplay, so I recommend that you at least keep the frame rate option to low. The inclusion of the extra RAM does contribute to more tasks staying open in the background, which is always a bonus when you want to switch between apps frequently. 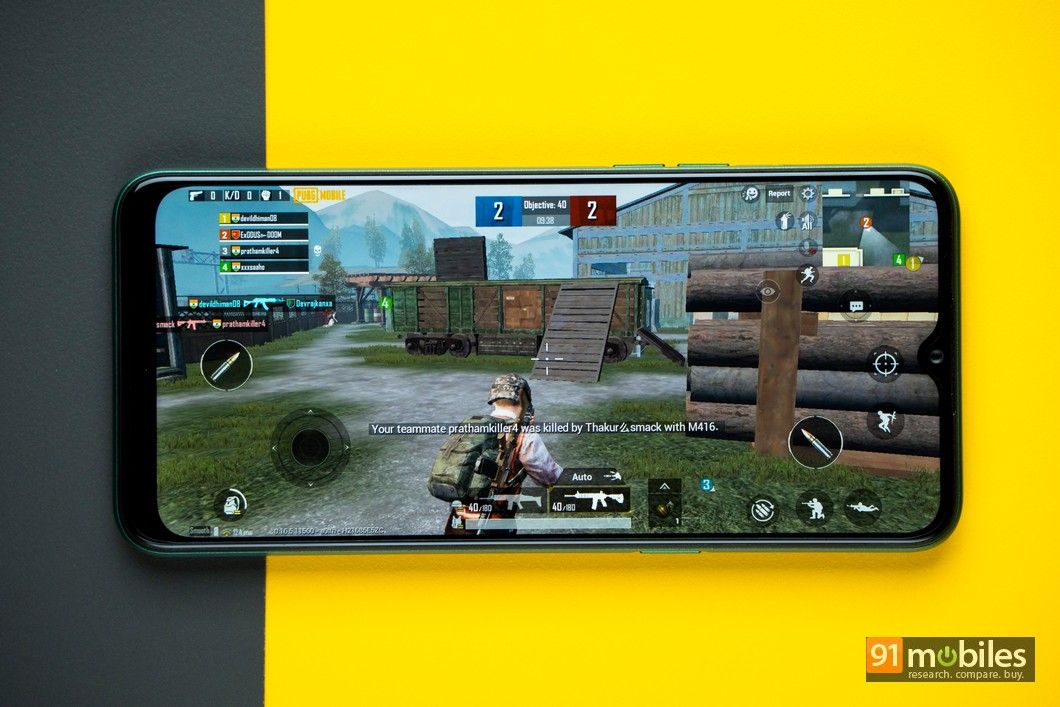 As far as authentication goes, the phone employs a capacitive fingerprint sensor on the back which is quite snappy, but at times it failed to recognise my fingerprint even after several attempts. The facial unlock feature, on the other hand, happens to be extremely fast and surprisingly reliant even in low-light conditions. This is something that we had said in our review of the Realme 5 as well. Apart from that the speaker, earpiece and mic quality was about as good as can be expected from a phone of this price. 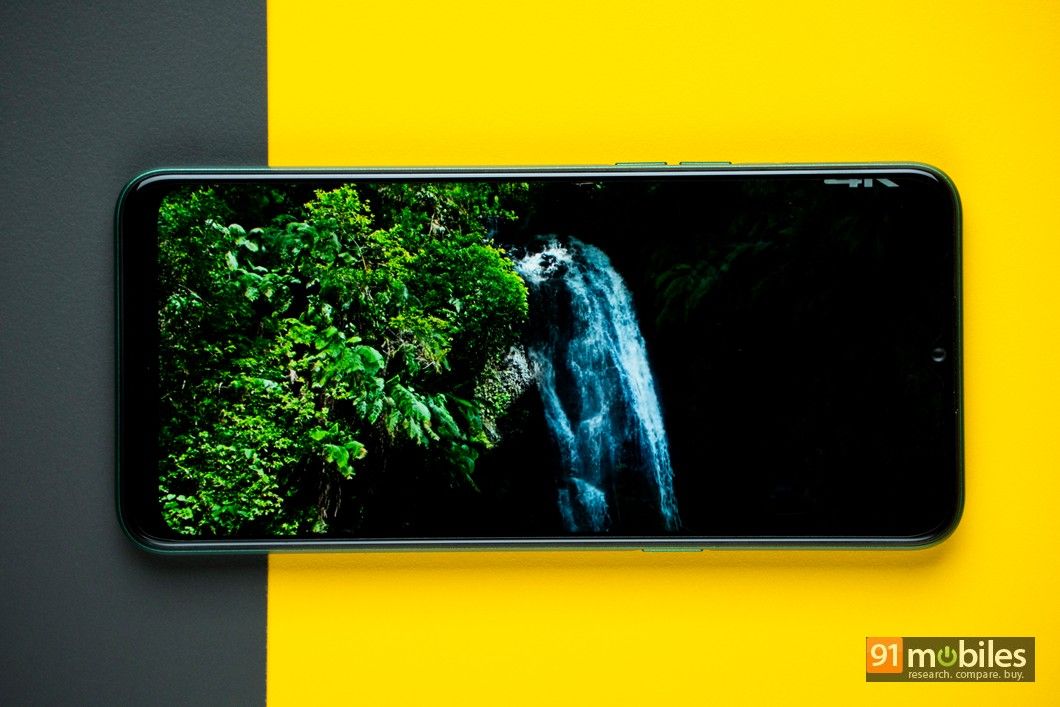 Software-wise, there’s ColorOS 6.0.1 which is based on Android 9.0, the same as most of Realme’s current smartphones. The company has recently unveiled its own user interface called Realme UI which is based on Android 10, and it would be interesting to see if it lands on budget devices like the Realme 5i. I’m willing to bet that it most likely will. However, for the here and now, we are getting the same software experience from Realme that we have been privy to for the past year. In summary – significantly less bloatware (than ColorOS 5.0), ease of access, an app drawer option, and nifty navigation gestures. 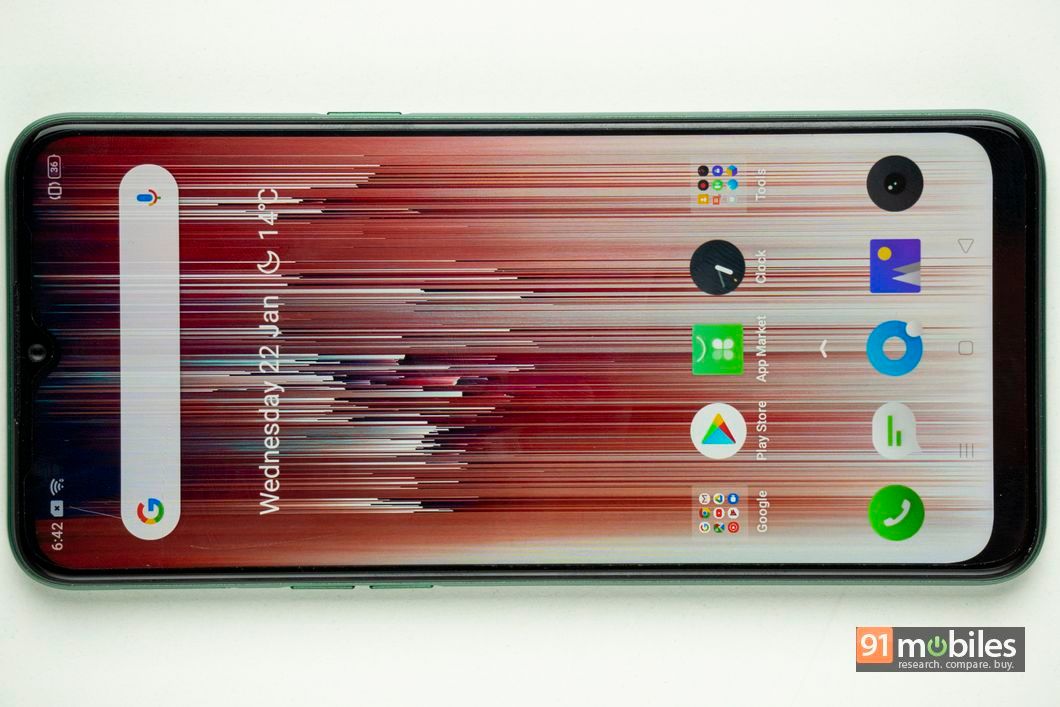 This is an area where Realme budget phones usually shine. The Realme 5i packs in the same 5,000mAh battery as the Realme 5. However, since Realme has provided only 10W charging support, it takes nearly two hours or more to juice up the device. Even so, the big battery combined with a lower resolution display and mid-range chipset makes this phone last nearly two days on a single charge. This becomes about one and a half days with 4G on. My usage involved an extensive amount of video streaming mostly on Wi-Fi but quite a bit on 4G as well, not to mention two hours of Call of Duty Mobile and a fully active WhatsApp and Slack account. For the average user who is buying a budget phone, the battery is one of the crucial aspects and it would seem that like previous Realme phones, the Realme 5i has nailed that aspect. 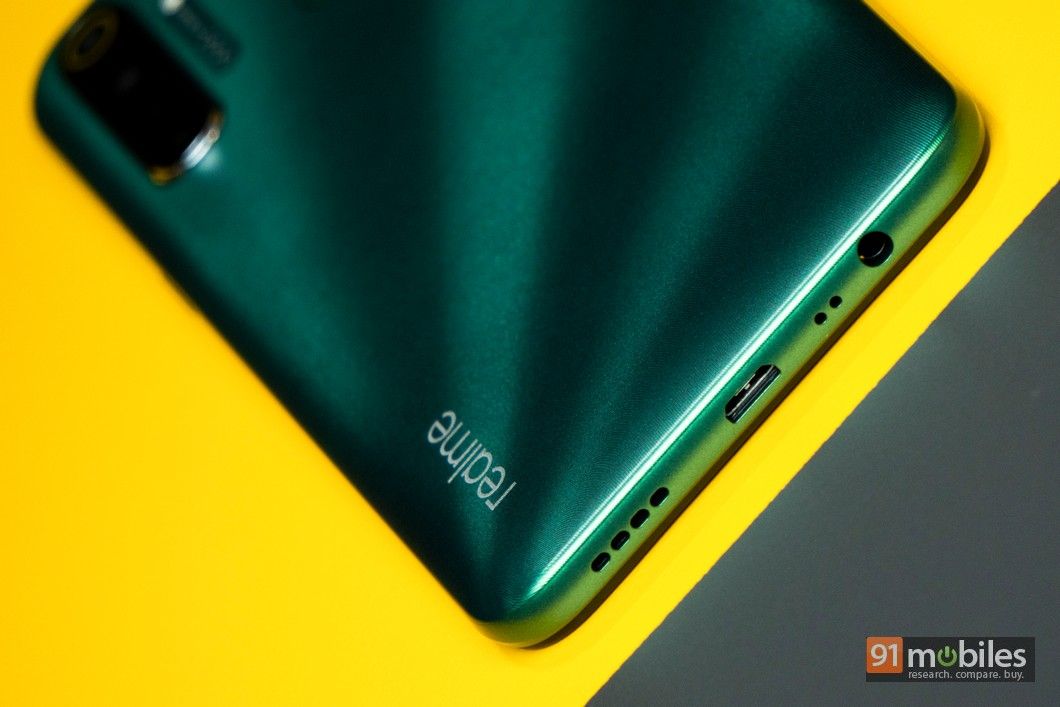 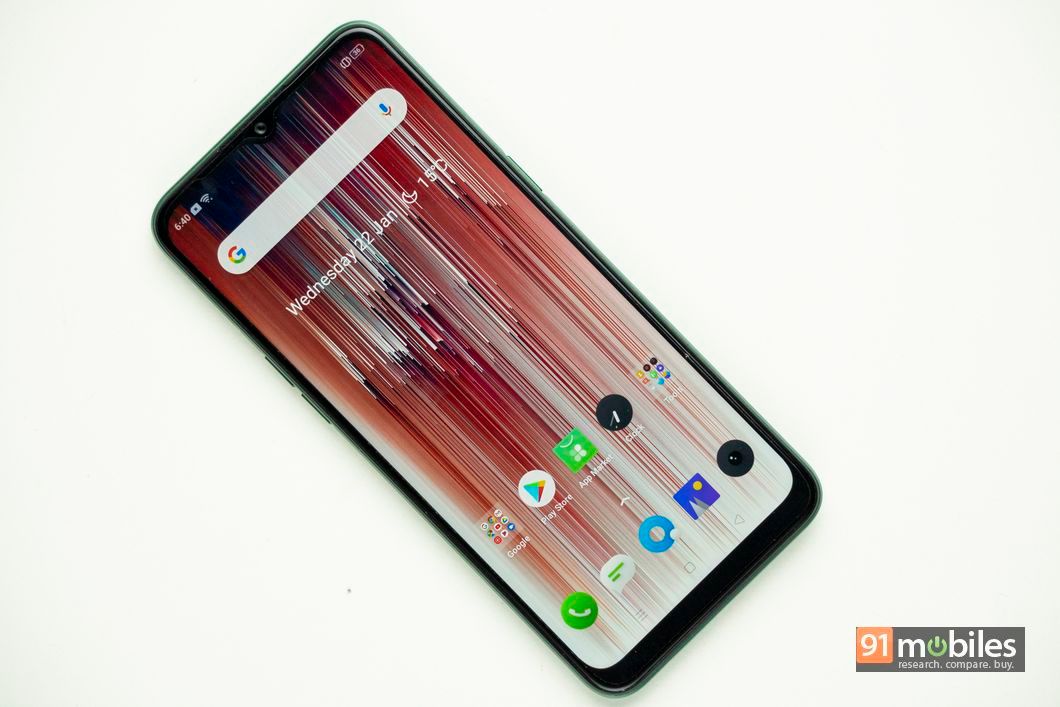 I find Realme 5i an easy phone to recommend in the budget segment the same way as I had no problems in saying that the Realme 5 was a great budget phone. It kind of makes sense since the 5i is almost the same phone as the 5 internally, except for more RAM and storage at the same starting price. On the outside, a slight change in the design of the phone’s back is the only differentiating factor. There are of course other options to choose from. The Redmi Note 8 comes to mind along with the LG W30 and there is a case that can be made for either device. However, as a wholesome phone in the budget category, you cannot go wrong with the Realme 5i.