Xiaomi has launched as many as eight phones in the Redmi 9 series in India this year and one can’t help but wonder if there’s a ninth phone around the corner to wrap things up. From the Redmi Note 9 Pro Max to the Redmi 9A, the company has a phone for each and every price point from Rs 19,999 all the way down to Rs 6,999. Still, Xiaomi managed to find a wiggle room to launch the new Redmi 9 Power, a phone that tries to offer Note-like features at a more affordable price point.

The Redmi 9 Power sits in between the Redmi Note 9 (review) and the Redmi 9 Prime (review) with a starting price of Rs 10,999. At this price, the phone offers an FHD+ display, 48MP quad cameras, a massive 6,000mAh battery, and Qualcomm’s Snapdragon 662 chipset, among other things. Interestingly, many of these specifications are also found on the POCO M3, which is yet to launch in India. So, can the Redmi 9 Power act as a good POCO M3 alternative for consumers in India? Read our review to find out.

Redmi 9 Power is the perfect middle ground between the Redmi 9 Prime and Redmi Note 9. It packs a bunch of useful features, including an FHD+ display, stereo speakers, and a massive 6,000mAh battery to keep you satisfied. Yet, the performance of the phone may leave you wanting for more, which is where the Redmi Note 9 becomes more attractive.

The Redmi 9 Power doesn’t look like any other Redmi 9-series phone that the company has launched in India, which is good because that makes it stand out. However, the phone’s design isn’t entirely unique as I could see some inspiration from Realme devices in the Sunrise Design matt back panel (seen on the Realme C3), the rectangular rear camera system (on the Realme 7i), and the large Redmi branding (somewhat similar to the Narzo 10A). It’s also worth mentioning that the Redmi 9 Power is a rebranded Redmi Note 9 4G that was launched in China recently.

Despite offering a large 6,000mAh battery, the company has managed to keep the phone’s weight under 200 grams, which is impressive. At 198 grams, I wouldn’t call the device lightweight, but it is easier to hold and work with compared to say the Realme C15 that weighs 209 grams. The curved rear panel on the Redmi 9 Power and the textured feel makes it easy to grip the phone. The finish also means it doesn’t attract a lot of fingerprints smudges. 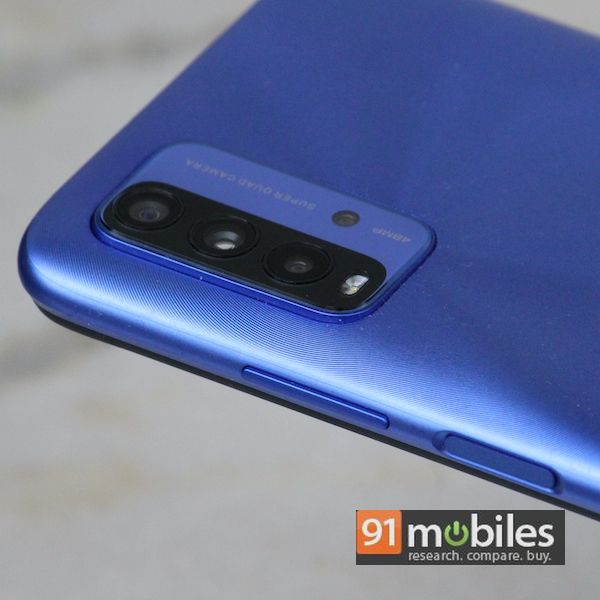 The Redmi 9 Power gets a side-mounted fingerprint sensor, which is placed at just the right height for easy reachability. The phone supports a triple card slot for two nano-SIM cards and a microSD card. The phone gets a bottom-firing speaker and an earpiece that doubles up as a speaker as well. So, the phone offers stereo speakers with High-Res audio support.

Coming to the display, the Redmi 9 Power sports a 6.53-inch screen with an FHD+ (2,340 x 1,080) resolution and Gorilla Glass 3 protection. The display size is fairly large and not the easiest to reach the corners with one hand. The screen offers good brightness levels and is quite legible under sunlight, though sunlight was hard to come by during winters in Delhi. 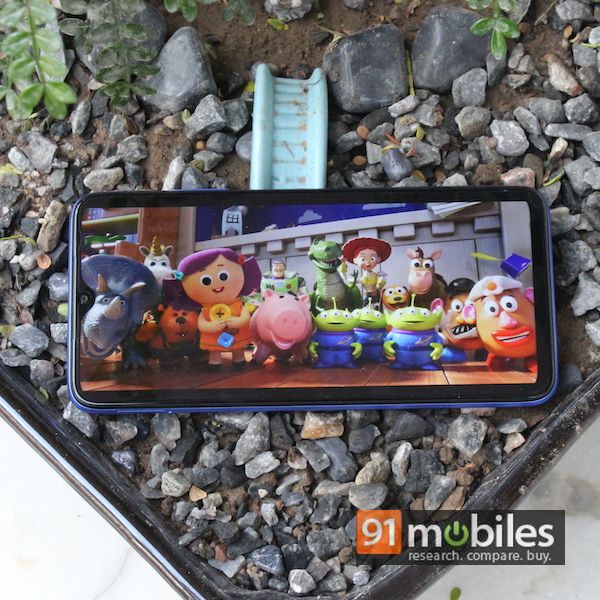 The display offers saturated colours and text appears crisp. The phone comes with the Widevine L1 standard, which means you can watch content on platforms like Netflix in full HD resolution. The sharpness of the video combined with stereo speakers makes the Redmi 9 Power a great entertainment device.

Redmi 9 Power features a quad-camera system that includes a 48MP Samsung GM1 sensor, an 8MP ultra-wide lens, a 2MP macro lens, and a 2MP depth sensor. It’s a familiar camera setup that offers a few cameras that work well and others that are just there to make the spec sheet look good. The camera app is busy and can take a while to get used to. Features like Night mode, Panorama, and so on are hidden away within the ‘More’ section while the Macro mode is placed in the hamburger icon on the top right corner. This makes it a little difficult to quickly switch between modes. The primary camera is able to capture bright photos in daylight with rich colours, especially with AI mode enabled. Sometimes, the colours can look a bit oversaturated and I found myself using the camera with AI mode disabled a lot of the time. There are also enough details in the photos to keep you happy. Dynamic range is not the best I’ve seen on a phone in this price segment, but it should get the job done. 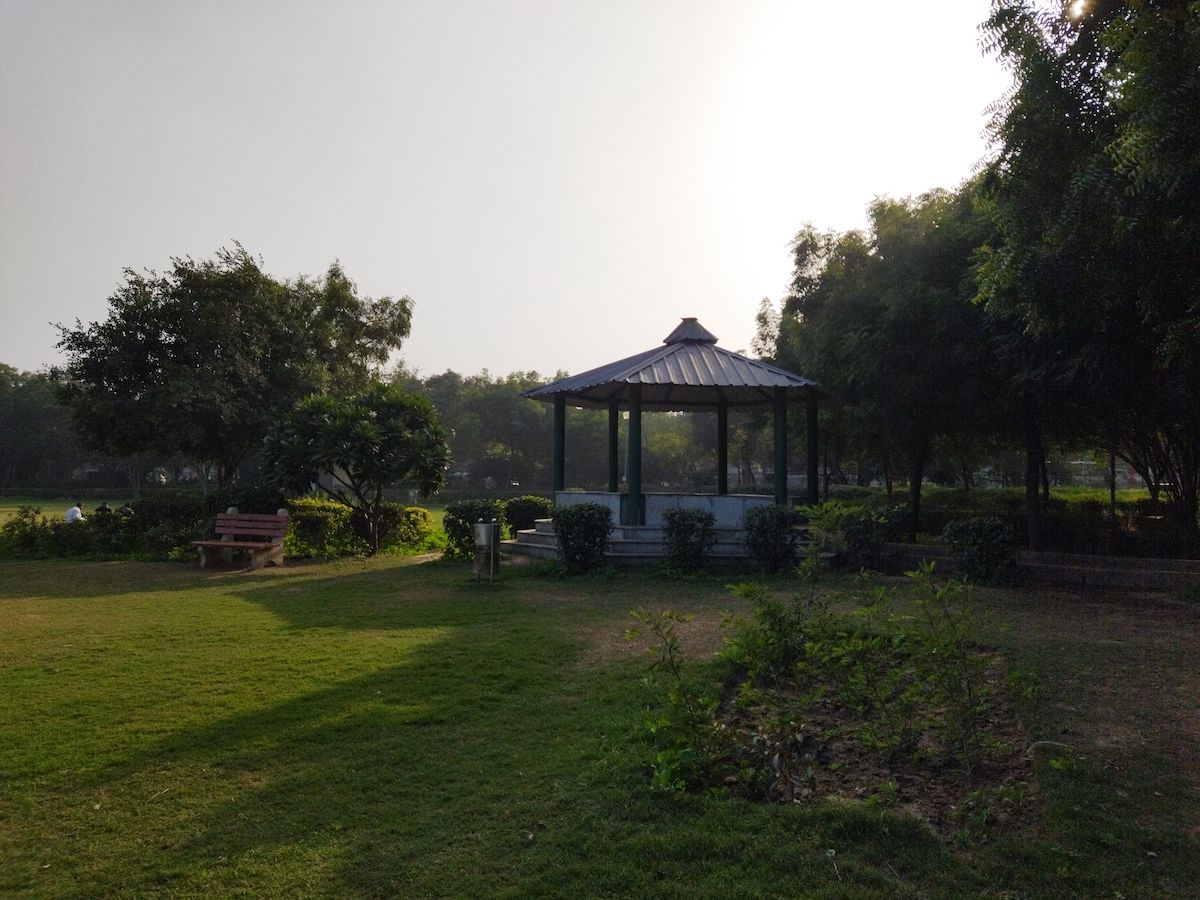 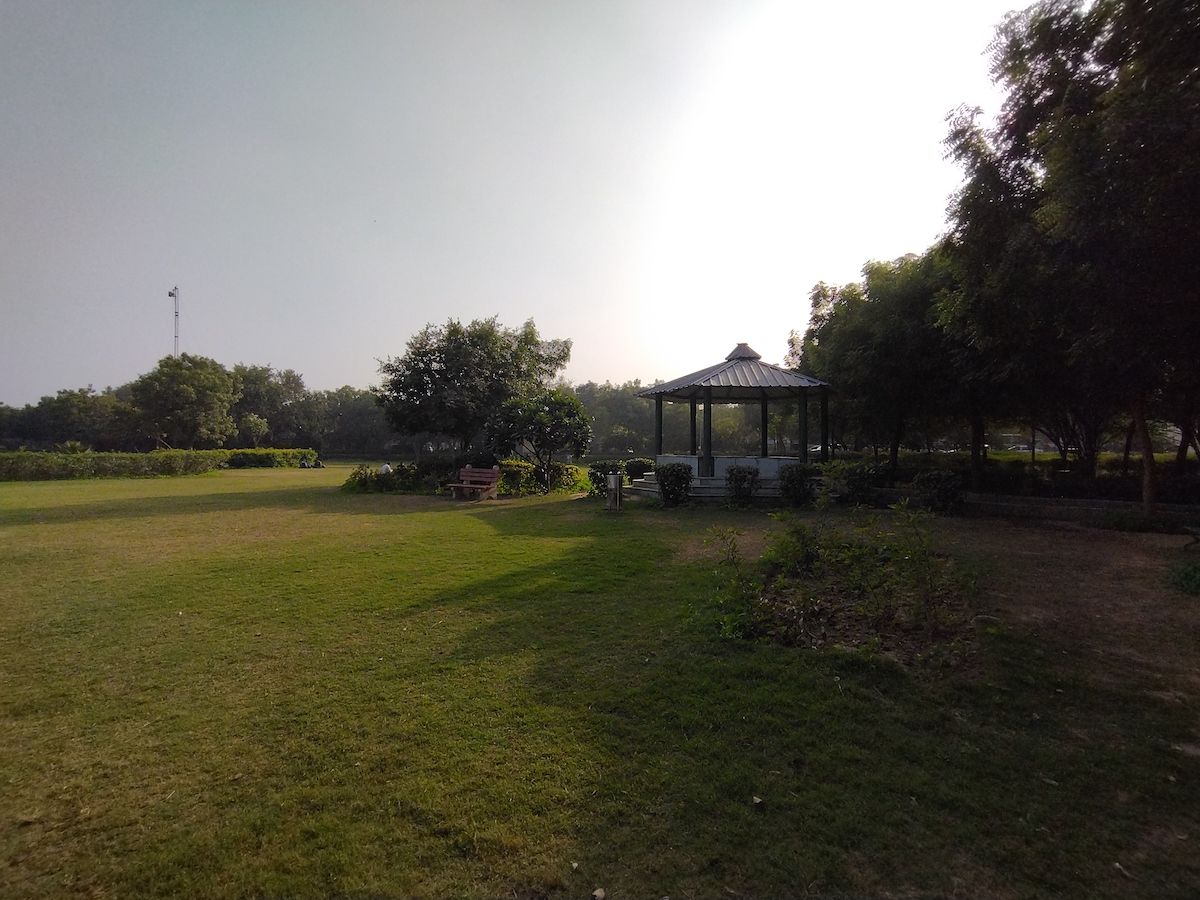 The wide-angle lens delivered the expected results. While the wide-angle lens does let you capture a wider field of view, photos appear washed out and lack sharpness compared to the primary camera. It’s still a more reliable camera to fall back on compared to the macro lens. The 2MP macro lens can help you get really close to a subject, but the slow shutter speed makes it hard to capture a crisp still image. 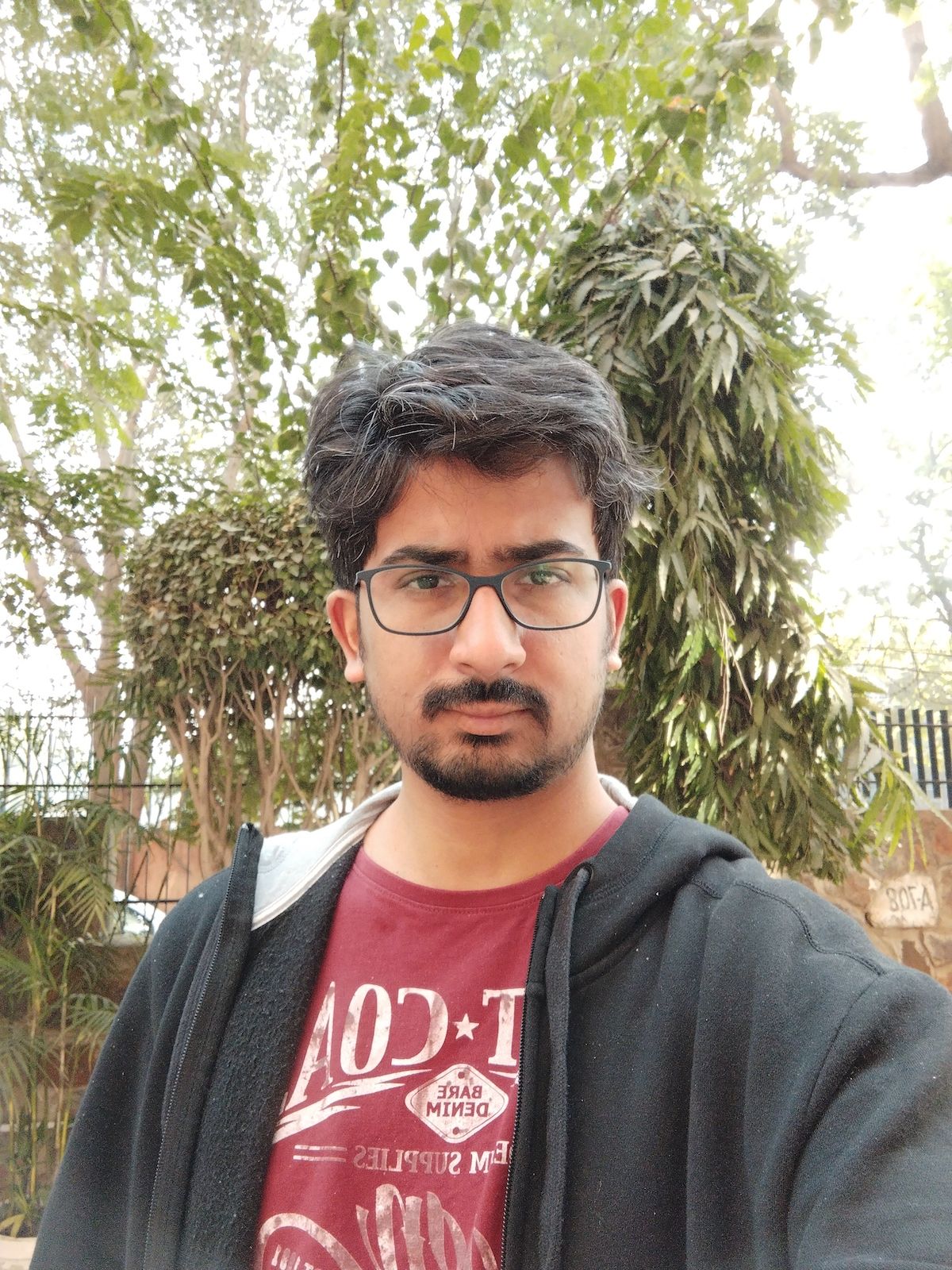 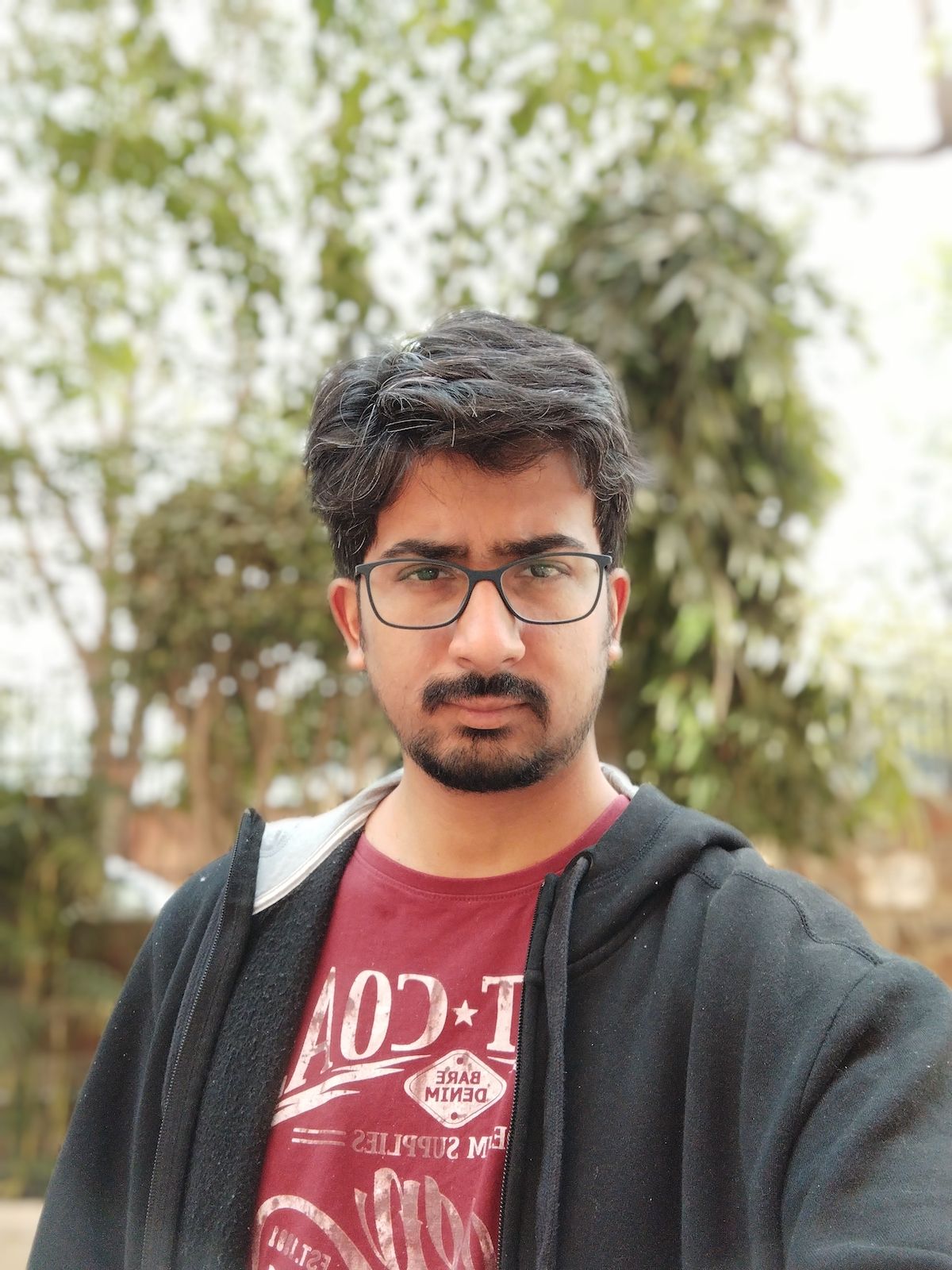 Night mode does a good job at reducing the blown-out portions such as street lights. The image appears clearer compared to one taken without the Night mode. It also reduces some noise, though there’s only so much the phone is able to do. Coming to the front camera, selfies look decent when beauty effects are disabled though I did notice glare issues around the edges of the photos captured on several occasions.

The Redmi 9 Power is powered by the Qualcomm Snapdragon 662 chipset, which was launched earlier this year. There haven’t been a lot of Snapdragon 662-powered phones in 2020 with the only other device offering the chipset in India being the Moto G9 Power. The mid-range processor is based on an 11nm process and delivers peak speeds of up to 2GHz. In Geekbench and AnTuTu benchmark tests, the Redmi 9 Power delivers pretty average scores. 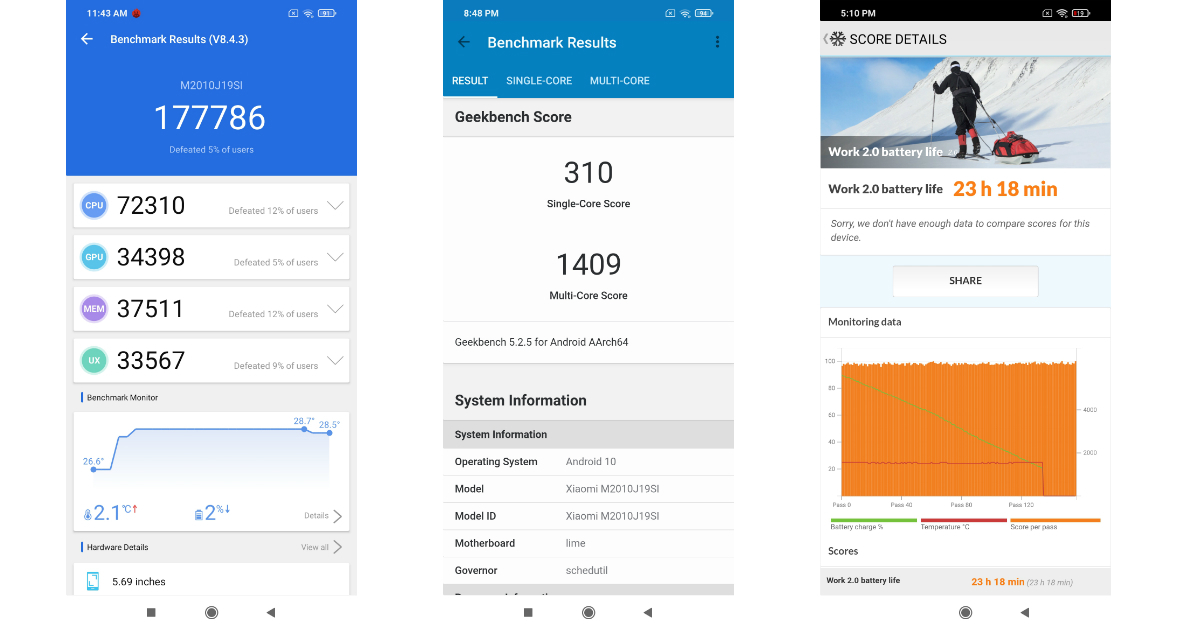 In real-world usage, the Redmi 9 Power does not feel the snappiest phone in its segment. The device does feel sluggish when opening apps and switching between apps during day-to-day usage. However, the phone is capable of running pretty much anything you throw at it and I did not encounter any crashes along the way. 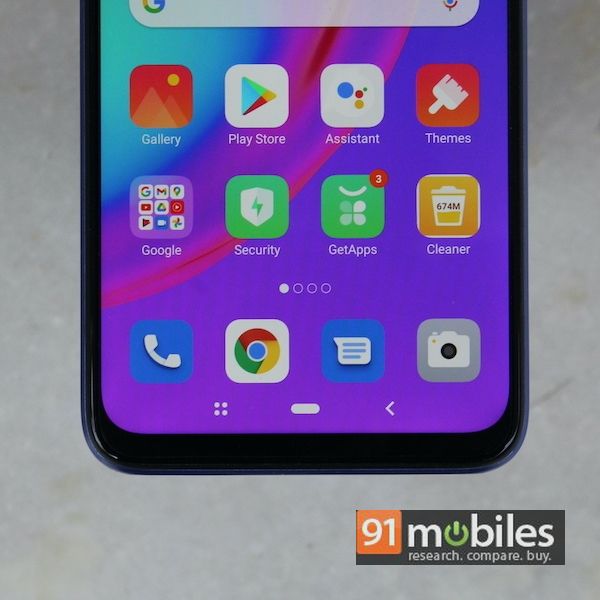 Redmi 9 Power can run games like Call of Duty Mobile smoothly in medium graphics. While I noticed some lag and drops in framerate, the phone managed to deliver a fairly adequate gaming experience thanks to the stereo speakers. The massive battery also means you won’t have to worry about a graphically-intensive game like CoD Mobile draining the phone after a 30-minute session. 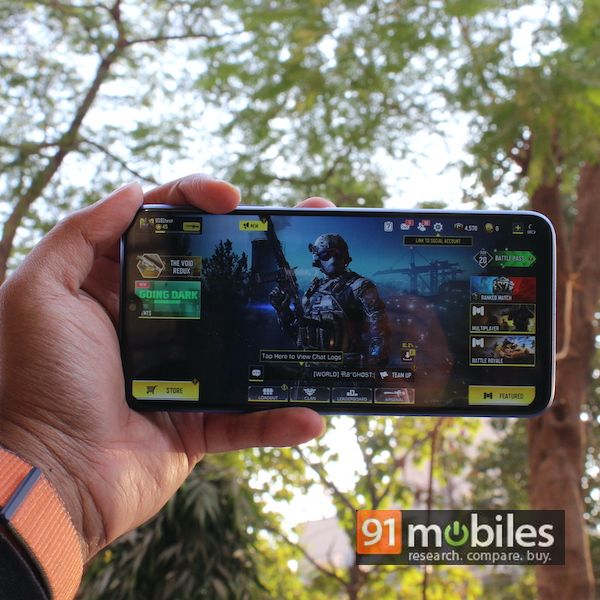 The Redmi 9 Power ships with Android 10-based MIUI 12 out of the box. While I would have liked to see the phone run Android 11, the MIUI 12 experience should please long-time Xiaomi fans. The new software version brings a redesigned UI that is easier to get used to. It also brings an app drawer, which can be enabled through Settings, allowing you to free up the home screen. That said, MIUI 12 on the Redmi 9 Power brings with it some bloatware that includes pre-loaded apps like Osom Rummy, LinkedIn, Facebook, Moj, ShareMe, and so on. Interestingly, I didn’t encounter a lot of spammy notifications during the review, but they do exist in some form. 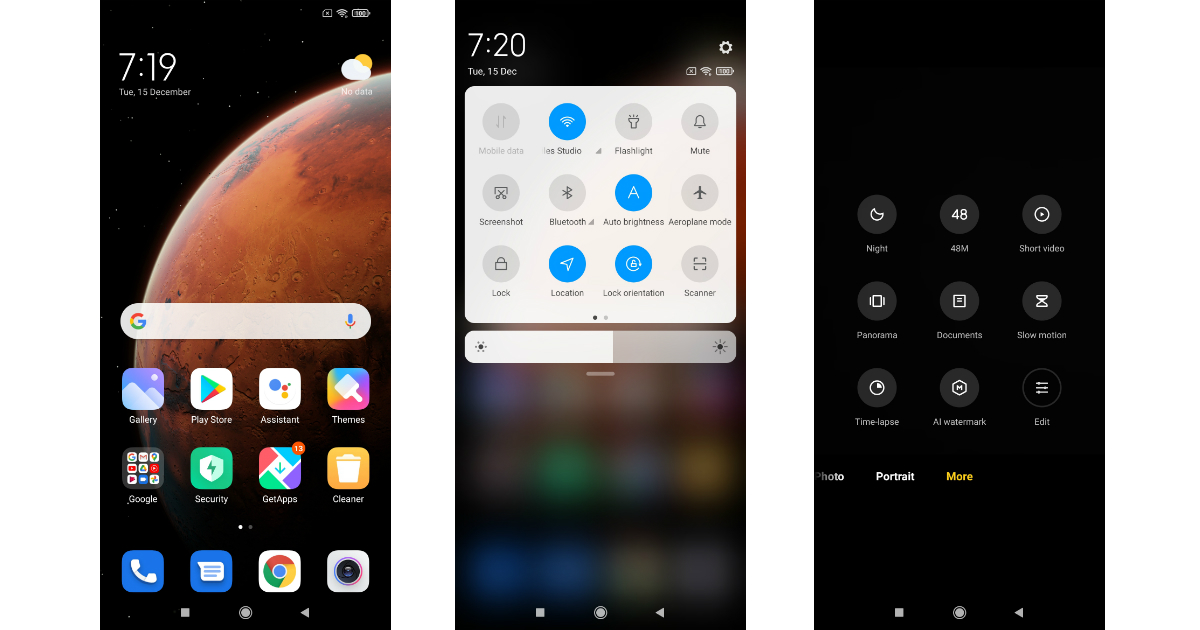 During the review period, I did not face any issues with call quality. The sound quality over the earpiece was loud and clear and there were no unexpected drops in connectivity as well. The side fingerprint sensor is easy to reach but takes a second to unlock the phone. The most noteworthy aspect of the Redmi 9 Power is the stereo speaker which provides a nice listening experience and can get plenty loud indoors. 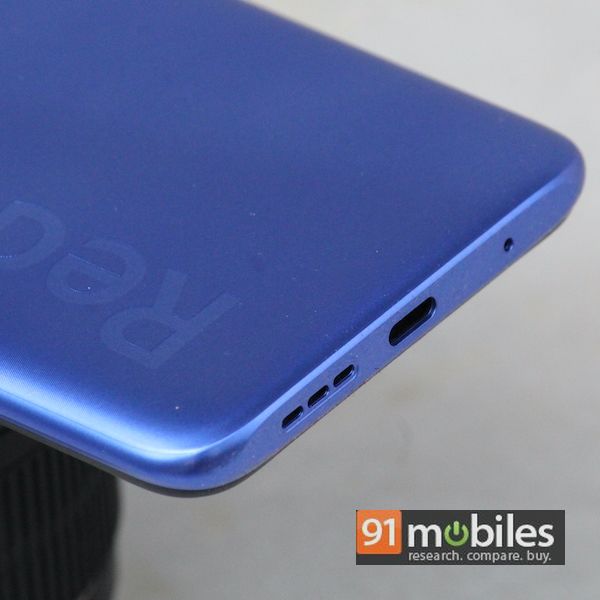 You get a 22.5W fast charger in the box though the Redmi 9 Power supports up to 18W charging only. It still takes a while to fully charge the 6,000mAh battery. In our testing, it took roughly 2 hours and 20 minutes for the phone to juice up from 20 percent to 100 percent.

Redmi 9 Power is a phone you didn’t know you were missing in the Redmi 9 series. Despite launching seven devices before it, the Redmi 9 Power manages to stand apart from the rest with its massive 6,000mAh battery. It’s an easy recommendation for anyone looking for a Redmi device with a long-lasting battery. In addition to this, you get a nice FHD+ display and stereo speakers, making it a pretty good entertainment-centric device.

That said, the Redmi 9 Power falls short of the Note line on the performance front. The Snapdragon 662 can get the job done, but the journey towards it will be marred with some sluggishness. The quad cameras are also average and we have seen phones like the Realme Narzo 20 (review) perform better. But if you’re not looking for a camera-centric phone but rather a reliable entertainment device, then the Redmi 9 Power won’t let you down.