“Our take on Samsung’s latest Galaxy – the A50s”

Samsung put its Galaxy A-range of smartphones in place to target the youth, which per the company, want a stylish daily driver with good cameras. To that extent, the brand’s all-new Galaxy A50s (first impressions) fits the bill, as the handset features a premium, prism-cut design and comes sporting a triple camera setup at the back comprising a main 48MP shooter.

However, it’s also true that the youth of the country are putting more and more faith into Chinese OEM offerings, which begs the question – can Samsung’s latest Galaxy bring a day of reckoning to the competition? To find out, I put my SIM in the Galaxy A50s and after using the smartphone for a week, here’s what I make of it.

The Samsung Galaxy A50s draws parallels to its predecessor, the A50 (review) in the design department. In fact, barring the new 3D prism finish on the back, telling one phone from the other is about as easy as finding Waldo in a comic strip. Both the devices offer the same ports and buttons, carry more or less the same heft and even sport similar notched displays upfront. Now, that doesn’t mean that the Galaxy A50s’ design is bad. On the contrary, the A50s looks outstanding and Samsung has done a darn good job with the gradient finish on the back of the phone, which at certain angles, highlights a geometric pattern and exhibits strips of rainbow towards the edges. 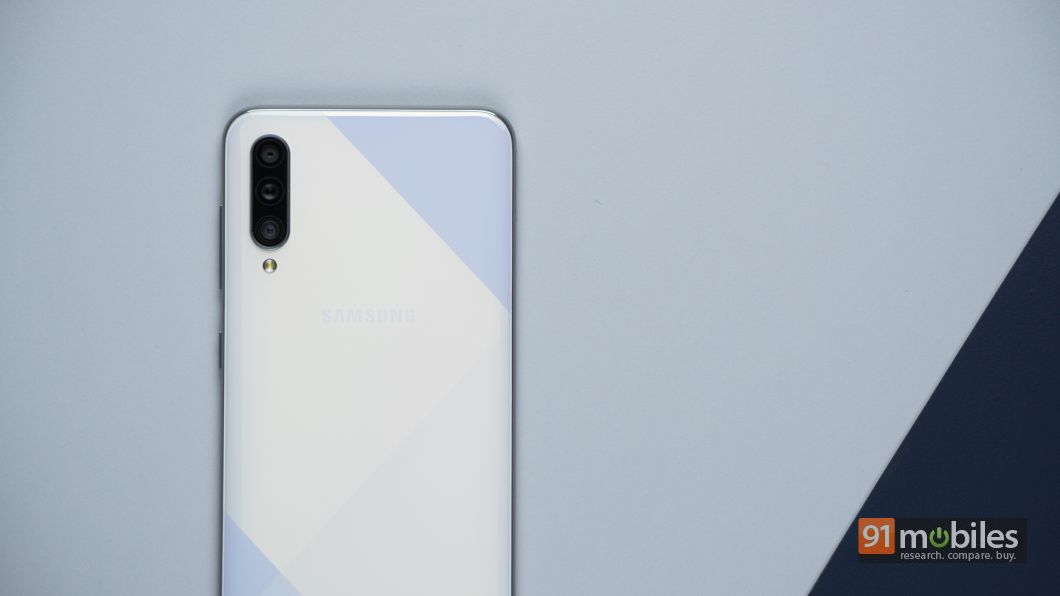 However, that doesn’t negate the fact that the Galaxy A50s’ design feels dated amidst a slew of pop-up camera-toting devices. That’s quite disappointing, as Samsung has routinely pushed the boundaries in the design department, be it with the Galaxy Fold (first impressions), or the company’s A80 (review), which offers a fully articulating camera setup and a full-screen display with no notch. Suffice it to say, I’d hoped the company would bring about some innovation to the design of the newer A50s too. 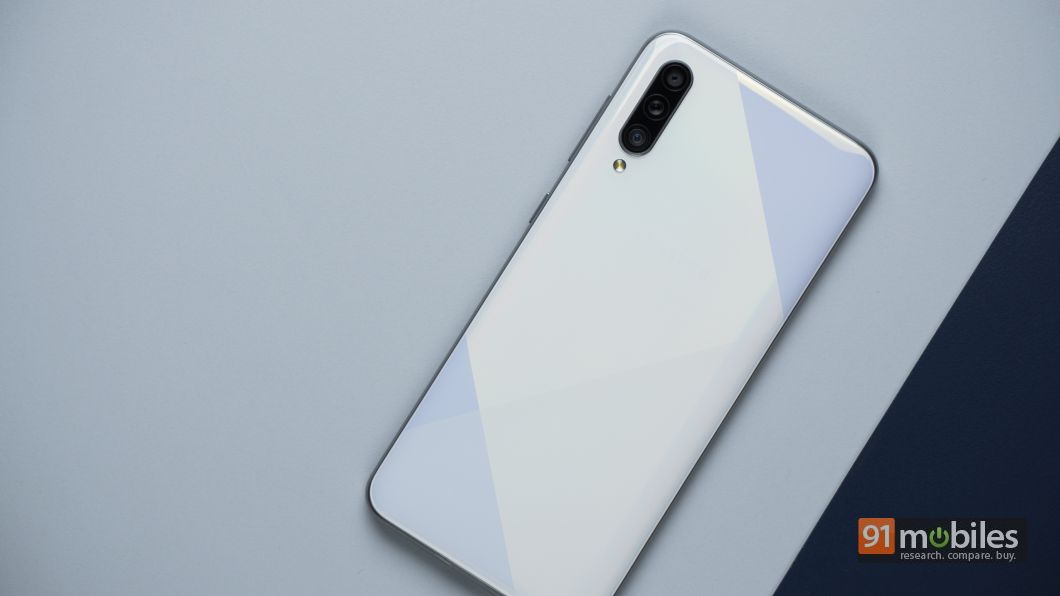 Moving on, the handset features an in-display fingerprint sensor, which can work in tandem with a built-in facial recognition software too. During my testing, neither of the two unlocking mechanisms blew me away, as they both were bogged down by the software’s leisurely animation speeds. However, the A50s’ facial recognition is extremely accurate, so you have that to look forward to should you pick up the phone. 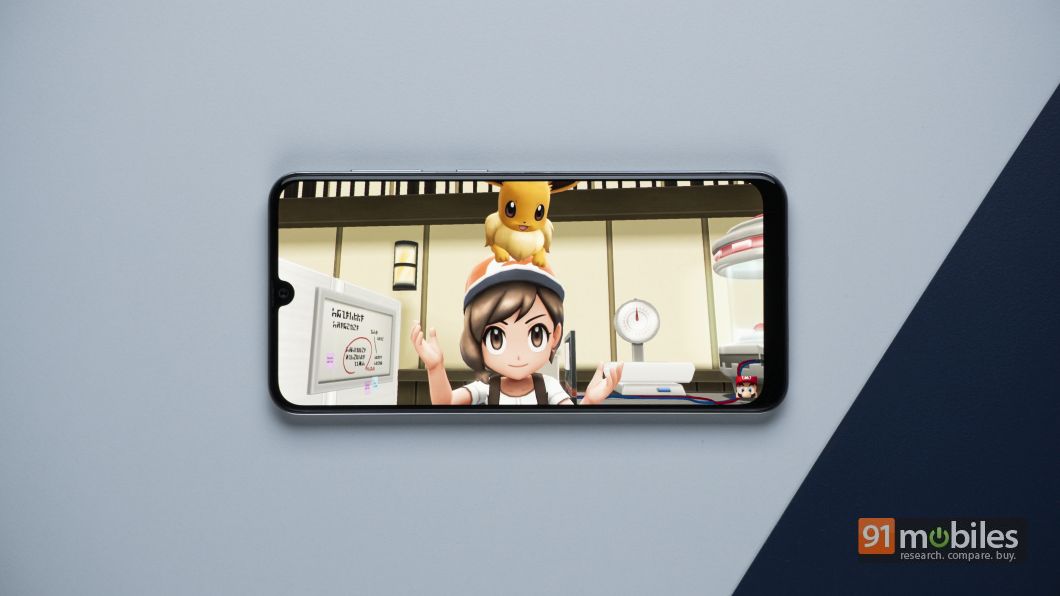 The A50s follows the same script as its predecessor in the display department too. Both the handsets feature a 6.4-inch FHD+ panel which is backed by the company’s Super AMOLED tech. The panel ships with minimal bezels towards the sides and offers a tiny waterdrop notch at the centre. Specs aside, the display on the A50s is very good and it exhibits punchy colours and boasts wide viewing angles. What’s more, the panel gets adequately bright under the sun too and it even ships with Widevine L1 certification, making it a godsend for media junkies.

Nowadays, smartphones with a 48MP primary camera can be found willy-nilly. On that note, Samsung has furnished its latest offering with a 48MP shooter too, but the company didn’t shed any light on whether it’s an in-house unit or a Sony sensor. The main camera has been paired with two assisting shooters towards the back, including a 5MP depth sensor and an 8MP telephoto lens. For selfies, the A50s comes equipped with a 32MP, f/2.0 front camera. 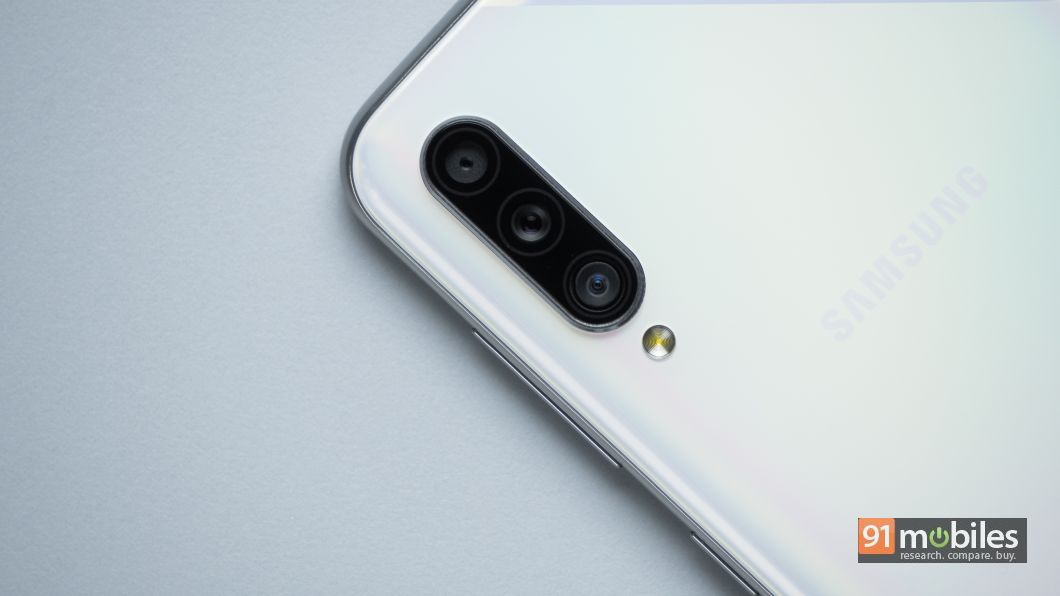 Having tested over a dozen or so affordable phones in the last few months, I can assure you that it’s entirely possible to get a reliable bargain snapper for your bucks. Unfortunately for Samsung, the company’s latest entrant doesn’t quite cut it amidst the competition. Allow me to explain –

1 – The Galaxy A50s is about as good as any other smartphone when the sun’s out. Shots taken in daylight are exposed properly, have ample details and vibrant colours. The smartphone’s 48MP mode is fantastic for clicking landscapes and capturing even the teensiest bit of detail in the scene. As always, you’ll find little to complain about the smartphone’s post-processing or dynamic range too – shots come out rich in colours, and the A50s squeezes out details from the shadows, whilst keeping the highlights in check.

2 – My first issue with the smartphone’s camera comes with its rear portrait mode, which almost always blurred the background unevenly. Moreover, the blur effect also ate into my hair and beard at times, which is a bummer.

3- The cameras fall short in lowlight scenarios and despite shipping with a dedicated night mode, shots taken after the sun had set were full of noise and grain. Moreover, the smartphone struggled to meter bright sources correctly too, and any picture of a street would have serious lens flaring in them.

4 – Similarly, while I absolutely loved the performance of the 32MP front camera during the day, selfies taken at night looked like water colour paintings. The colours felt soft, the details were amiss and there was considerable noise in the shots. Using the bundled screen flash tech did bring up the details and minimise the grain in the photos, but it also darkened the background.

Samsung has tweaked the innards of its latest offering and with the Galaxy A50s, buyers will get the company’s Exynos 9611 processor which has been mated to either 4GB or 6GB of RAM. That said, you’ll get 128GB of built-in, user-expandable storage with both variants. Now, the Exynos 9611 offers a marginal performance boost over the A50’s 9610, which is evident in both synthetic benchmarks as well as daily usage. To give you a clearer picture, the A50s with the Exynos 9611 silicone scored 1,53,929 points in Antutu, whereas the A50’s 9610 chip amassed 1,43,399 points. In day-to-day usage, I did notice the A50s to be a tad-bit quicker whilst opening applications, however, the in-game performance was more or less the same across both SoCs. 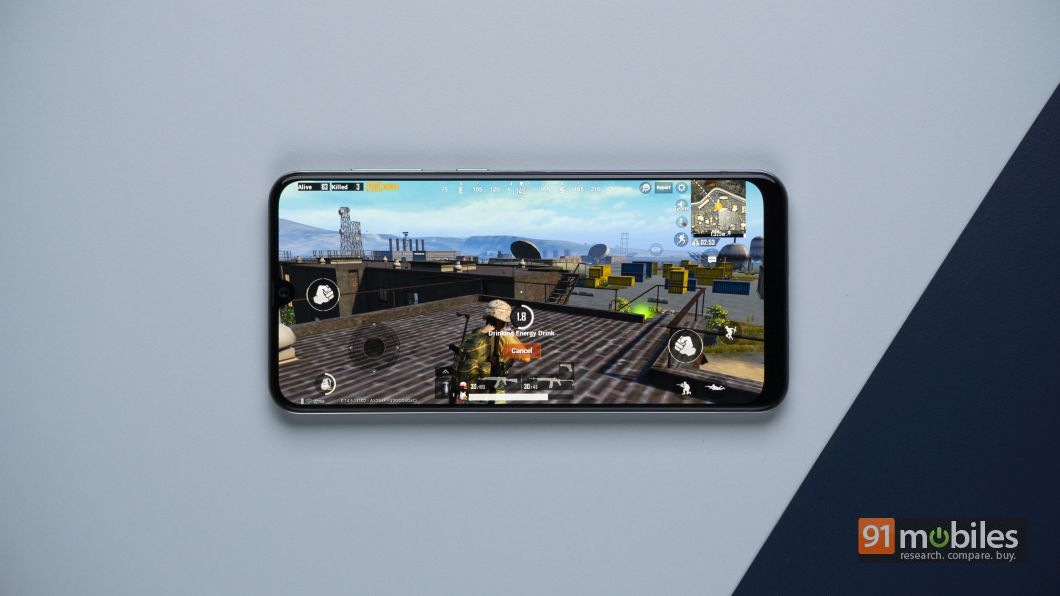 Unsurprisingly, I faced the same issues with the newer 9611 processor while playing intensive games like PUBG and there were noticeable frame drops. Toning the graphics setting down did help, but if gaming is an integral part of your life, then you might want to opt for a phone with a speedier chip and more powerful GPU. 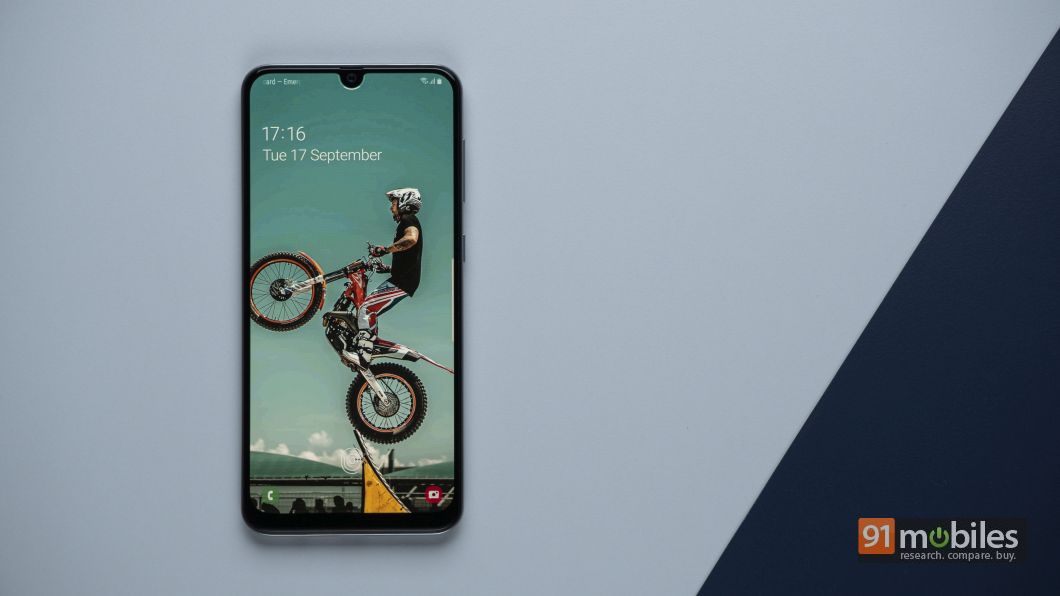 As for software, the company’s Galaxy A50s boots OneUI on top of Android Pie. The UI offers no cosmetic changes over the one you’ll find with the A50 or any other Samsung offering running Android Pie for that matter. However, this time around, the company has introduced NFC payments with the A50s, giving buyers the option to leave their credit/debit cards behind. That’s quite a handy feature to have in your arsenal as Samsung Pay is quite popular amongst restaurant franchises and supermarket stores. Other than that, you’ll get a night mode with the custom skin which although isn’t new, still deserves a mention. The software also comes with gesture-based navigation, so you can ditch the on-screen buttons which take up space at the bottom of the phone’s crisp display.

If you think that the lockscreen is just a gateway for unlocking the phone to access its functions, then Glance will turn that notion on its head. Even without the need of installing any app(s), Glance makes your lock screen much more useful and informative. On the Samsung Galaxy A50s, the feature offers the ability to see news, get cricket scores and more, all on the lockscreen itself.

You don’t even need to change your behaviour to use it, as you just need to swipe right to move on to the next topic. Of course, you can personalise the topics you want to follow, making the content better suited to your taste.

Believe it or not, when I first held the A50s in my hand, I had the phone pegged to include a 3,000mAh battery. Much to my surprise, the smartphone features a beefy 4,000mAh cell which comfortably saw me through the end of a heavy workday involving clicking tons of selfies, playing casual games like Clash Royale, browsing my Twitter feed and socialising with friends on Instagram and Snapchat. To put my usage in numbers, I was consistently hitting 4-5 hours of screen on time with the phone, and the device managed to last for 14.5 hours in our battery drain test.

For its starting price of Rs 22,999, the Galaxy A50s gets most things right. The smartphone features a gorgeous design, comes with reliable innards and offers a long-lasting battery life. That said, I still feel that the device doesn’t do enough to make its mark in the dog-eat-dog affordable segment, especially when you factor in devices like the Realme XT (first impressions), the Vivo Z1X (review) or the Redmi K20 (review) which offer better specs and cameras at lower price points. 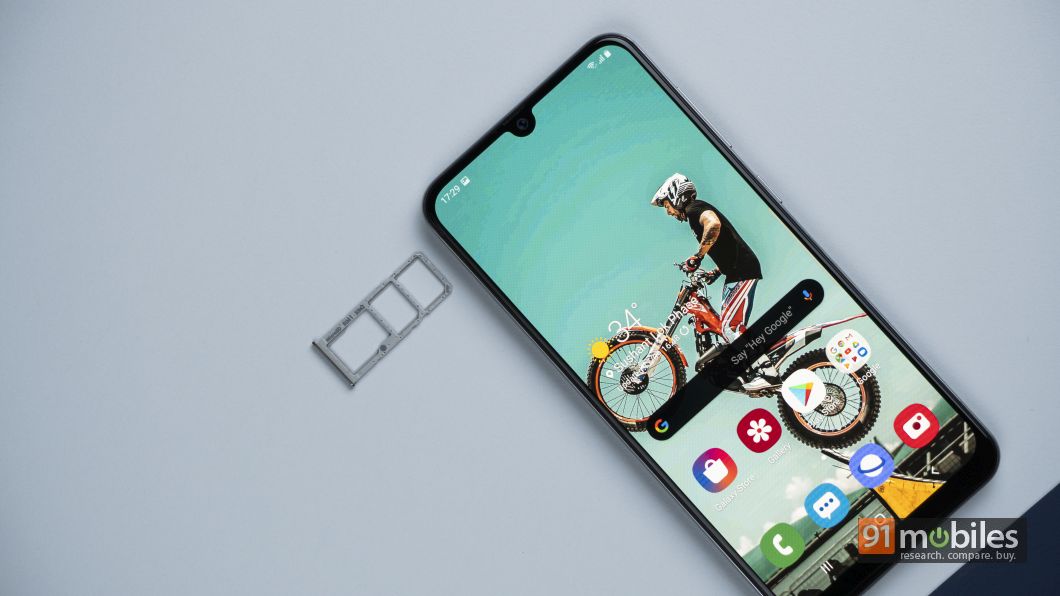 What’s more, while I would’ve made a case for the company’s brand name, the rampant growth of brands like Realme is proof that Indian consumers care deeply for value. Correspondingly, while the Galaxy A50s is a good attempt by Samsung, it’s not enough to thwart off the Chinese competition.