91mobiles.com
Home Reviews Samsung Galaxy A52 review: a waterproof mid-ranger that gets the job done 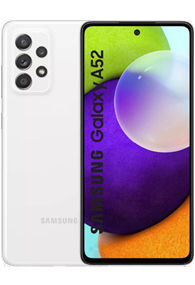 The Galaxy A51 from Samsung was one of the highest selling phones globally last year. And this means that its successor, the Galaxy A52 has some pretty big shoes to fill. From the outset, it does look like the new smartphone is up to the task, bringing in massive upgrades as compared to its predecessor. However, the ever-changing competitive landscape makes things an uphill task. So how does the Galaxy A52 fare? 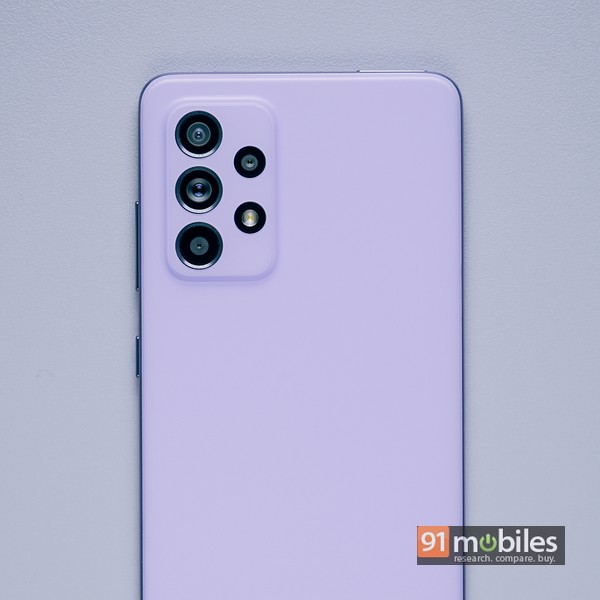 The Galaxy A52 is a capable smartphone that has to contend with powerful rivals. That said, it offers IP67 waterproofing, a feature that is unmatched by others and can be pretty useful, along with respectable performance, a good display, and a decent set of cameras. Overall, it packs in enough to come across as a worthy buy, as long as you know what to expect from it. 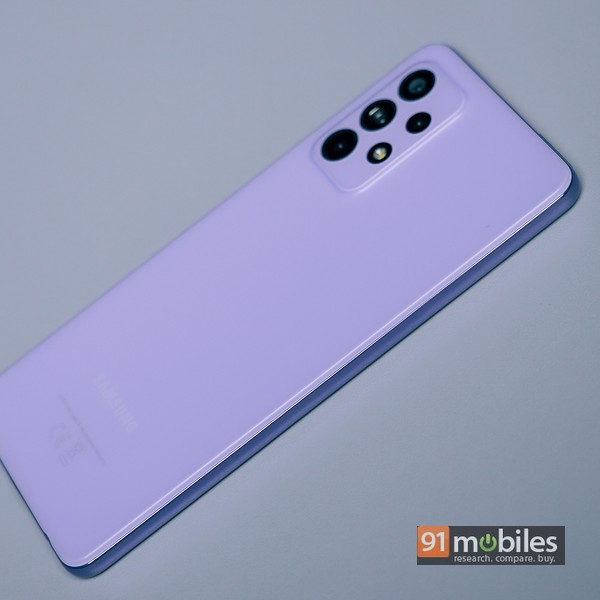 Design-wise, the Galaxy A52 looks pretty good, and despite its polycarbonate construction, feels well made and reasonably premium too. Though it’s more of a personal preference, I do like the subtle, frosty hues the phone comes in, especially the blue and the violet (pictured here). Sure, they probably won’t stand out against some of the more flamboyant, gradient-hued smartphones available these days, but they still look good, and don’t collect a lot of smudges and fingerprints. I do wish Samsung hand bundled a case in the box though. 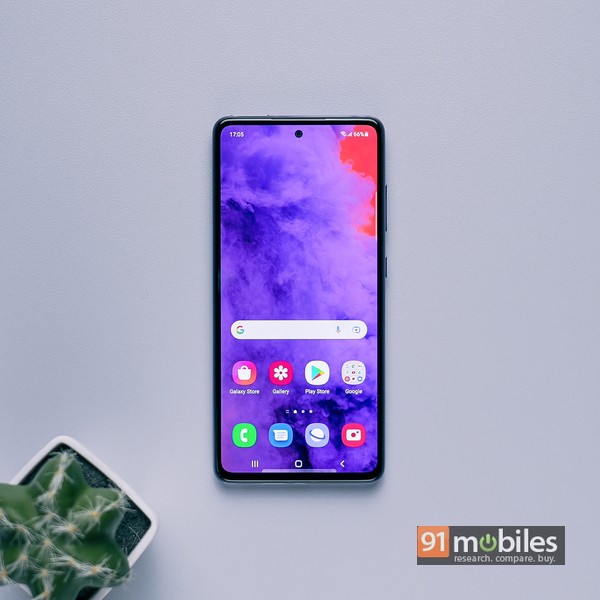 The fact that the screen size is a very decent 6.5-inches keeps the overall dimensions of the phone quite manageable, and compact. In terms of real estate, I think the screen size sits at the sweet spot between being able to offer an immersive experience without being massive. And it’s a lovely screen too, bring all the goodies of Samsung’s signature AMOLED panels, offering FHD resolution and a refresh rate of 90Hz. The colours are vivid, and the blacks are deep as well. 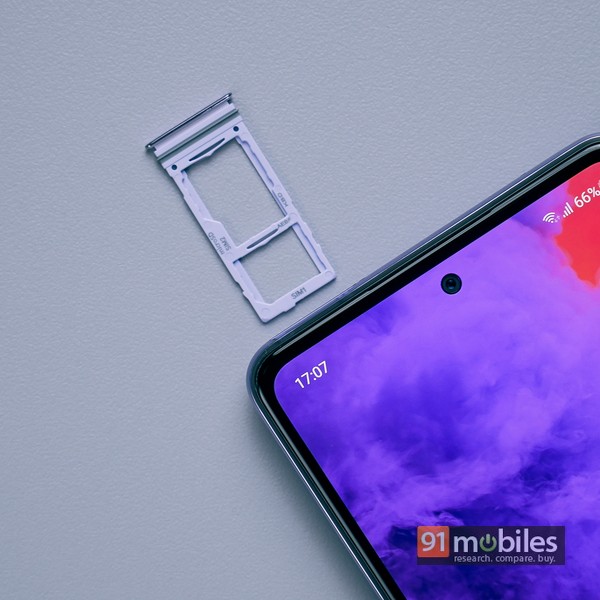 I do love the fact that the Galaxy A52 carries an IP67 rating. It’s a fairly big deal in my opinion, especially at this price point. While many affordable phones do claim to be splash-proof, it’s tough to define exactly to what extent they can survive exposure to liquids. For instance, if you spill a glassful of water on the dinner table resulting in your phone getting drenched, it might be tough to be really sure whether the device will be able to survive the ordeal. On the other hand, an IP67 rating, which states that the phone can withstand actual submersion in water which is up to 1m deep, and for up to 30 minutes, seems to be much more definitive, and therefore, should add to the peace of mind. Worth mentioning that IP67 is a pretty high rating on the ingress protection scale, with the highest level being IP68 usually boasted of just by premium flagship smartphones. 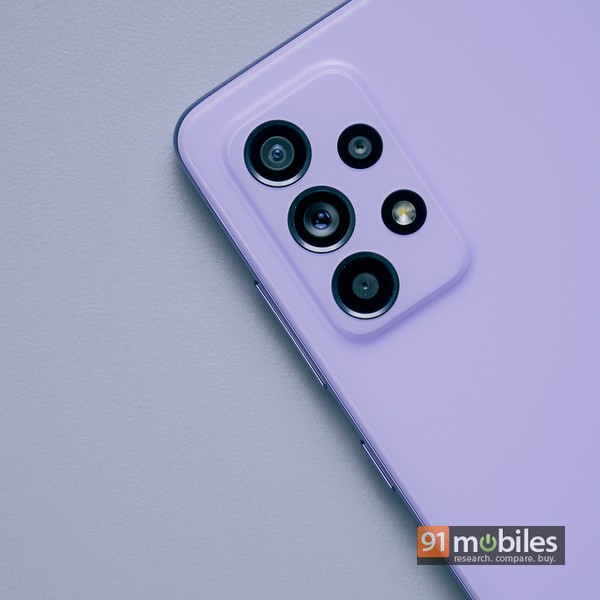 The Galaxy A52 also has a lot to boast of the camera front. The main sensor at the back is a 64MP f/1.8 affair, which is paired with a 12MP, f/2.2 ultra-wide, a 5MP depth and a 5MP macro sensor. Do note that there’s no dedicated telephoto here – that is reserved for the phone’s more accomplished sibling, the Galaxy A52. The addition of OIS is a nice touch, and one that helps get rid of shake and jitter quite a bit, both with stills and videos. 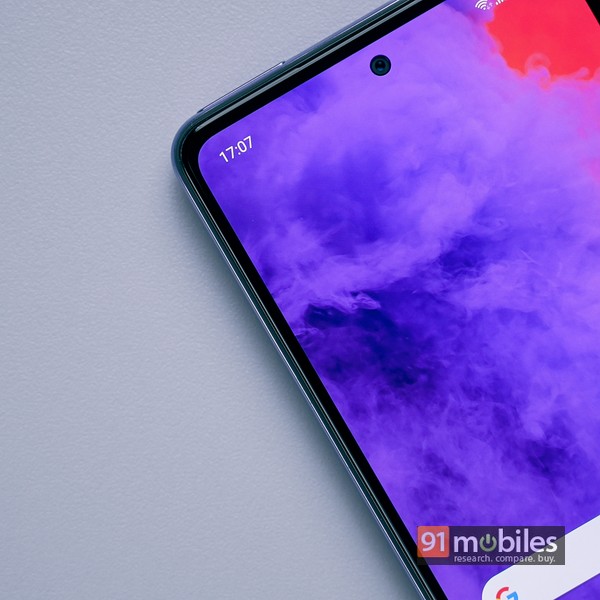 Up front is a 32MP snapper, hiding in the punch hole and ready to capture a snap at a moment’s notice. The camera app is pretty familiar, the same as the one we’ve seen previously on most Samsung phones – easy to use, despite being loaded to the brim with features and options. You get all the usual modes, include a dedicated one for the night, plus frills like an AR Zone that includes AR Doodle and what not. Also on board is Single Take, a feature so useful that I think every phone should have it. It basically fills your gallery with a bunch of different stills and short videos, all captured with one take (hence the name, duh). I wonder if there’s any third-party app that can do the same thing for phones that don’t have this feature. A new addition is the so-called Fun mode, which allows you to make use of Snapchat filters directly within the camera app. 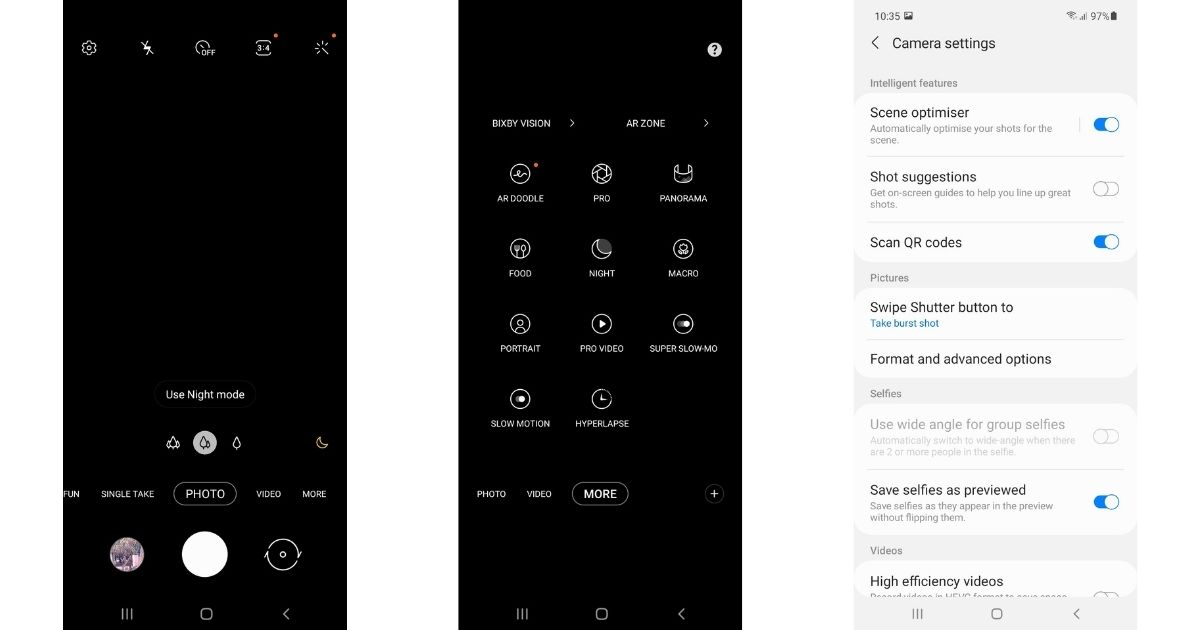 Specs and features aside, the cameras on the Galaxy A52 deliver for the most part. Since it used pixel binning, the main sensor shoots 16MP stills by default. Daylight shots turn out quite nice, with abundant detail and dynamic range. In a few cases though, darker areas of images do show some noise. There’s the AI-based Scene Optimizer that does its job in selecting the right settings based on ambient conditions, and Auto HDR works well in some cases too. Upping the resolution to full 64MP, the shooter can capture more details, albeit at the cost of processing speed… and sometimes that slowness can result in blurry shots. The ultra-wide sensor does a fair job too, capturing a decent amount of detail and reasonably good colours. The images do appear a bit soft around the edges, but thankfully not much distortion is visible, possibly courtesy the software-based distortion correction feature which is enabled by default in the camera settings. The depth sensor does a good job with the portrait mode and blurs out the background well, with the edge detection being good for the most part. Unfortunately, the macro sensor can be a hit or a miss, and to some extent, is dependent on the availability of good ambient light. Speaking of, the night shots turn out above average, with the dedicated night mode doing its bit in terms of bringing out more detail and colour. The front shooter also works well, shooting well-exposed, sharp selfies. Skin tones are usually accurate, with portrait mode and low-light performance being reasonably good too. Do note that the 32MP front sensor also uses pixel binning and shoots 8MP still by default, and it’d probably be best to leave it at that since switching to 32MP means you lose out on the Auto HDR and Scene Optimizer features. 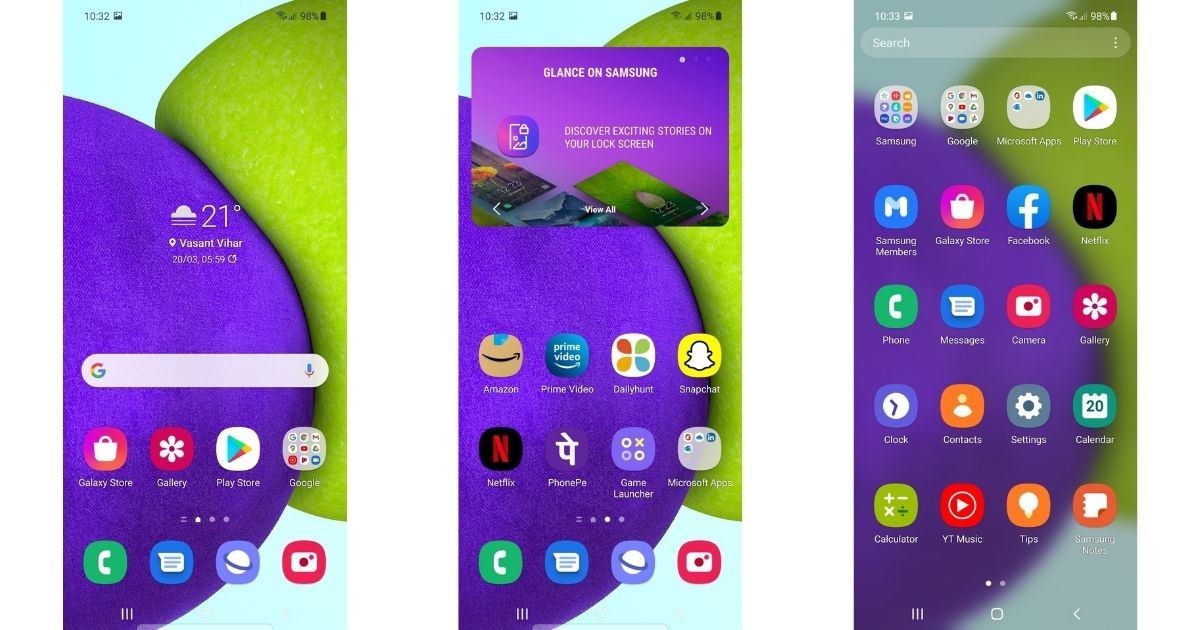 From a software platform perspective, the Galaxy A52 gets all the usual features courtesy One UI running atop Android 11. On board are a bunch of apps from both Samsung and Microsoft (as expected), along with a whole host of ecosystem features like Samsung Cloud, Samsung Pay, and Secure Folder. While all that is fine and dandy, the phone also comes with a ton of bloatware installed, with apps such as PhonePe, MX Takatak, Moj, Dailyhunt, Snapchat, and others preinstalled. 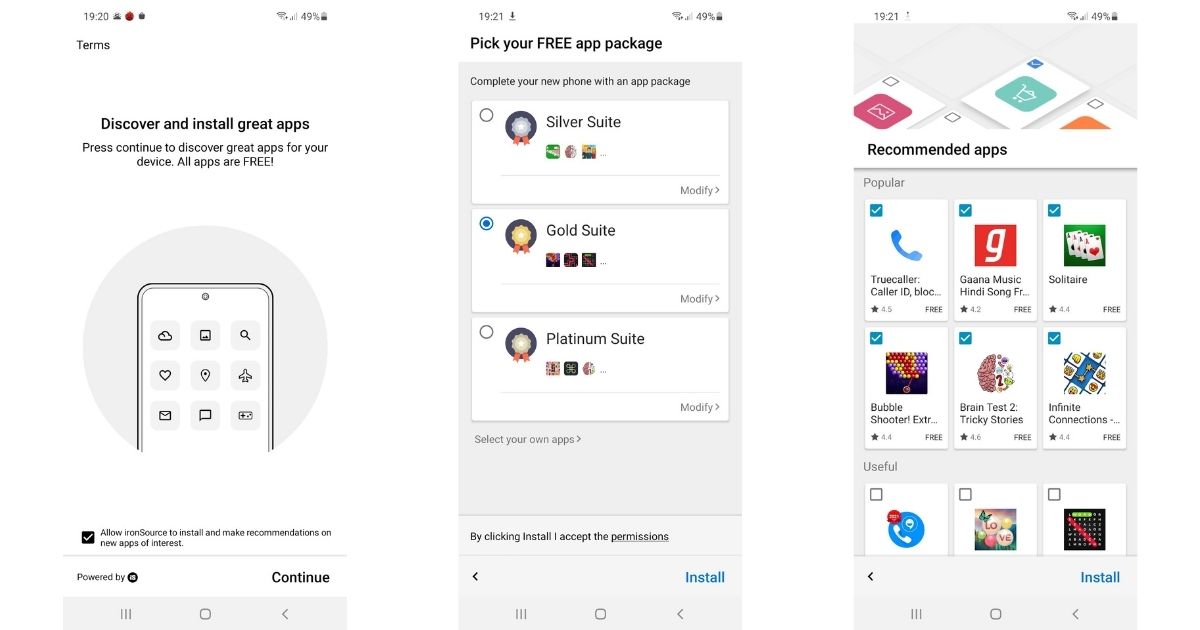 Thankfully, most of these can be preinstalled, but I certainly don’t appreciate being arm-twisted into installing apps I don’t want, which is exactly what something called “AppCloud” tries to do. It pops up at setup time and “suggests” apps to install, and keeps showing a persistent notification in the notification bar too. I’m hoping Samsung can get rid of this via a future software update, because it is rather annoying. I do, however, appreciate the three platform upgrades and four years’ worth of security updates that Samsung has promised. 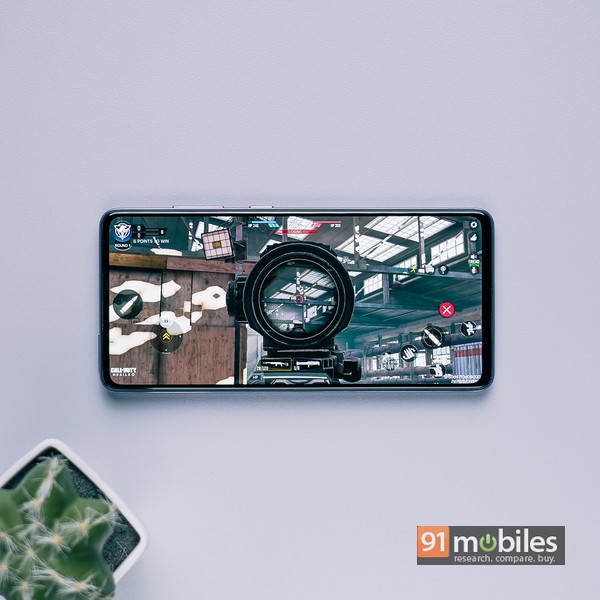 Powering the Galaxy A52 is Qualcomm’s Snapdragon 720G. Now that does seem like a strange choice, given that the SoC is a bit old by now and already available in quite a few other (and cheaper) smartphones. The chipset does pack in enough grunt for day-to-day tasks, and some gaming too. The 8nm chip is an octa-core processor with two 2.3GHz high-performance cores and six 1.8GHz efficient cores, and comes along with the Adreno 618 GPU. The phone can run intensive games like Call of Duty smoothly, but not at the highest settings. Occasionally, some stutter becomes apparent even while scrolling through the UI, but for the most part, it shouldn’t leave you asking for more as long as you’re not a demanding user and keep your expectations in check. For a large chunk of users who mainly use the usual set of apps, the performance should be more than satisfactory. Worth mentioning that my review unit comes with 6 gigs of RAM and 128GB storage, though there’s an 8GB RAM variant with the same storage as well. 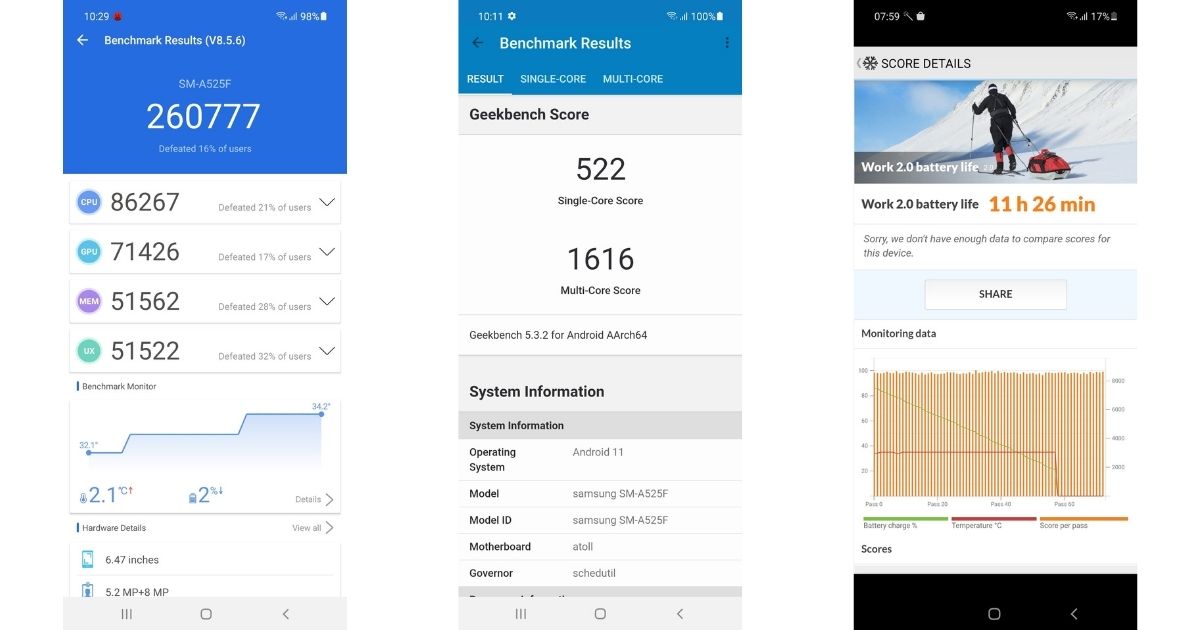 The 4,500mAh battery delivers a full day’s usage without needing a top-up charge, but your mileage could vary depending upon usage. The PCMark battery test lasted 11.5 hours, which is above average. While there’s no wireless charging support, you do get support for 25W fast wired charging. The only issue is that the bundled charge supports just 15W, and takes almost 2.5 hours to charge the phone fully.

The phone fares well in other aspects. The stereo speakers offer decently rich audio output, and I didn’t face any call or network-related issues, on the Jio network in Vasant Vihar, Delhi. The in-display fingerprint sensor and the face unlock work as expected too. 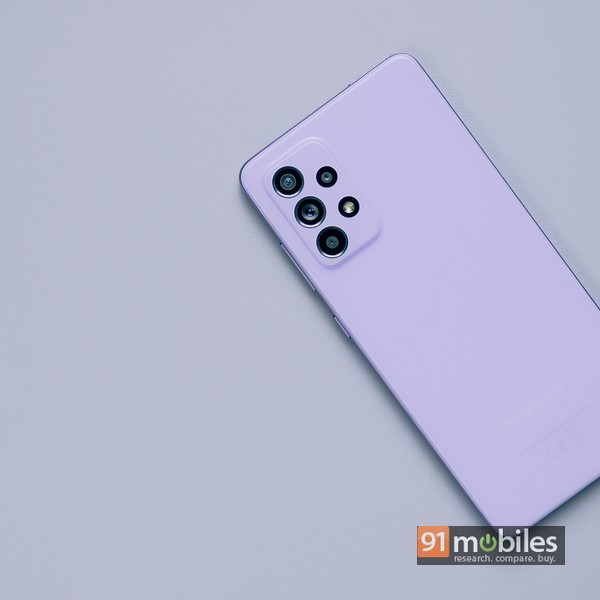 In sum, the Galaxy A52 is a good device overall, but one that could have been better. That statement can actually be applied to anything and everything, but Samsung could have done well to include a faster processor, and some basic essentials like a 25W charger (since the phone supports it), and a case in the box. The 5G version of the Galaxy A52, which hasn’t been launched in India yet, does come with a 5G-capable Snapdragon 750G SoC and a 120Hz display, which are specs that sound much better on paper as compared to what the 4G version of the Galaxy A52 offers. When it comes to rivals, the Galaxy A52 goes up against the likes of the OnePlus Nord (review), the Xiaomi Mi 10T, the Mi 10i (review), and others in its price segment. Each of these devices has its own set of pluses and minuses, and in most cases, offers better performance than the Samsung Galaxy A52. On the other hand, the Galaxy A52 does feature IP67 waterproofing, which could appeal to a fair chunk of prospective buyers. And just for this, I’m willing to give the A52 extra points. The Galaxy A52 is worth considering if you feel that the waterproofing feature might come in useful, and are looking for a no-frills, reliable daily driver that checks most boxes. Those who prefer the Samsung tag should also find the A52 worth their while.