While the entire world is drooling over the recently launched Samsung Galaxy S8 and the Galaxy S8+ flagship smartphones, let me remind you that the Chaebol had also introduced upgrades to its Galaxy A series earlier this year; the Galaxy A5 (2017) and Galaxy A7 (2017), being two of them. 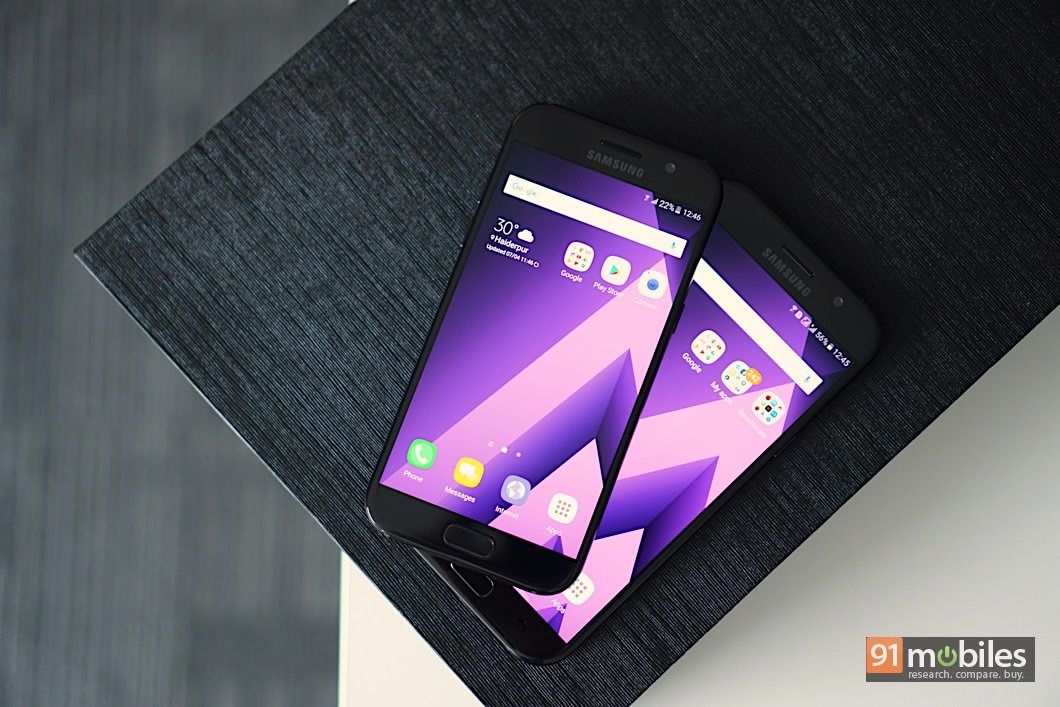 For most part of this review, I will use the Galaxy A7 (2017) as the main device and talk about the A5 (2017) in context considering almost everything is the same, including the design. In fact, the Galaxy A5 (2017) could’ve very well be called the Galaxy A7 compact (2017). Obviously, I shall highlight the differences where necessary, like the size, the display, and the battery life. Let’s get down to the review. 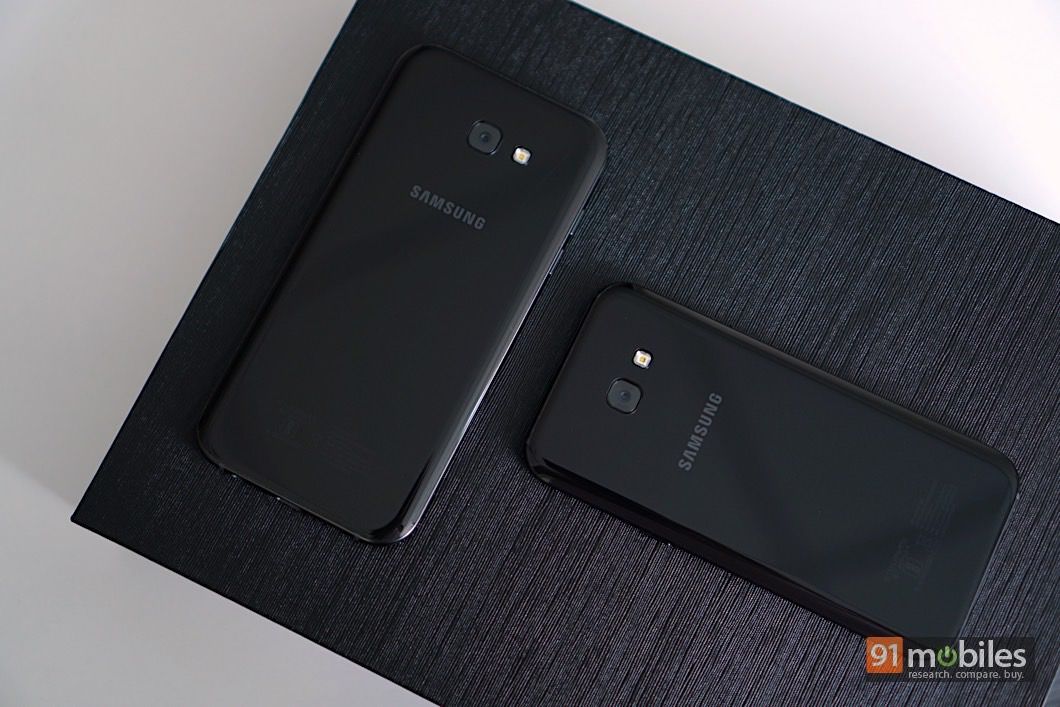 Both the Galaxy A7 (2017) and the Galaxy A5 (2017) resemble the Galaxy S7’s (review) design with their curved glass unibodies, metal edges and rounded corners, which is not necessarily a bad thing. The glass curves neatly blend into the metal edges from the rear and the front. In black, the phones look stealthy and absolutely sexy. In all honesty, the duo look and feel like expensive flagship smartphones right from the outset. But do note, the glass body is susceptible to scratches, scuffs and fingerprints. Moreover, it slips out of the hands very easily. That said, the metal railing does add some rigidity to the device and should break the fall. In any case, I think you should put the phone in a case. 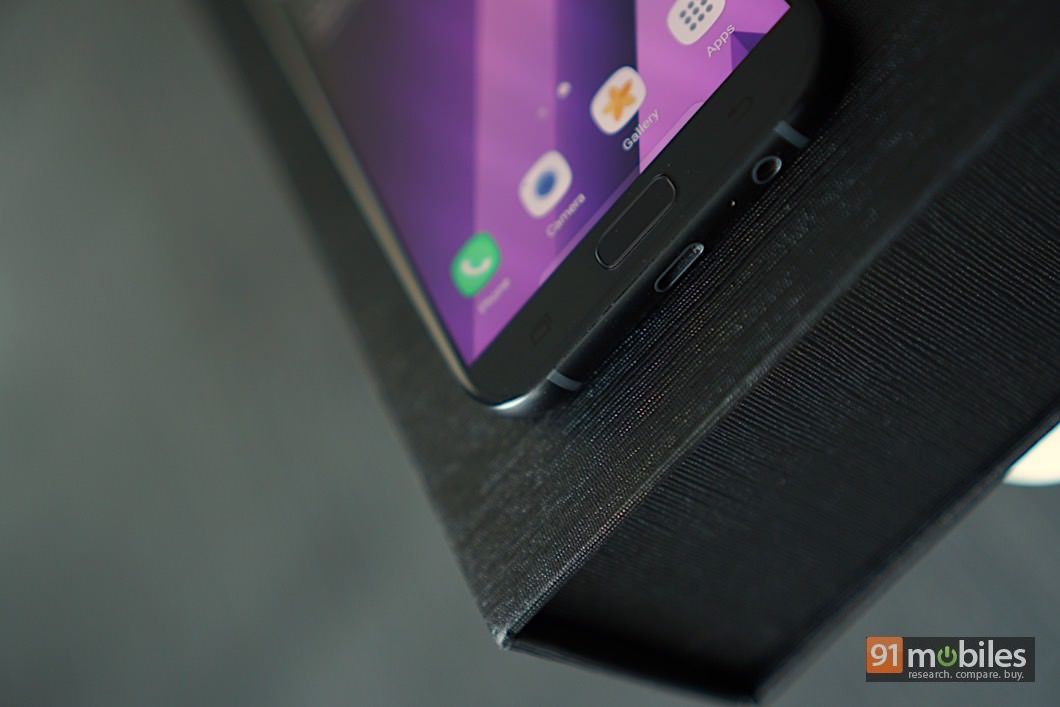 Thanks to the Galaxy A7 (2017)’s larger 5.7-inch display size compared to its predecessor’s 5.5-inch screen, the phone is now a tad thicker, taller, wider, and heavier. So is the case with the Galaxy A5 (2017), when compared to the Galaxy A5 (2016). However, in daily use I rarely noticed the increase in weight because it is evenly distributed across the devices. I actually like the additional girth in a phone because then I feel like I am holding a substantial device and not just a flimsy gadget. It goes without saying that the Galaxy A5 (2017) is easier to handle of the two thanks to its more compact size. Furthermore, the physical buttons for volume up / down functions and power – placed on the left edge and right edge, respectively – are properly raised and provide a great tactical feedback. The fingerprint scanner lies on the home button below the display. I found it to be iffy and not one of the most responsive ones out there.

I have two minor issues with the design of both the phones, though. Firstly, the loudspeaker is placed on the right edge above the power button. Yup, you are bound to block it inadvertently each time you hold the phone in landscape position to view videos. Moreover, the speaker’s sound quality itself is not too great. Secondly, the USB Type-C port at the bottom is not aligned in the centre and is offset slightly. I know it is a very minor thing but when you are paying so much for a phone, you expect perfection. At least, I do. 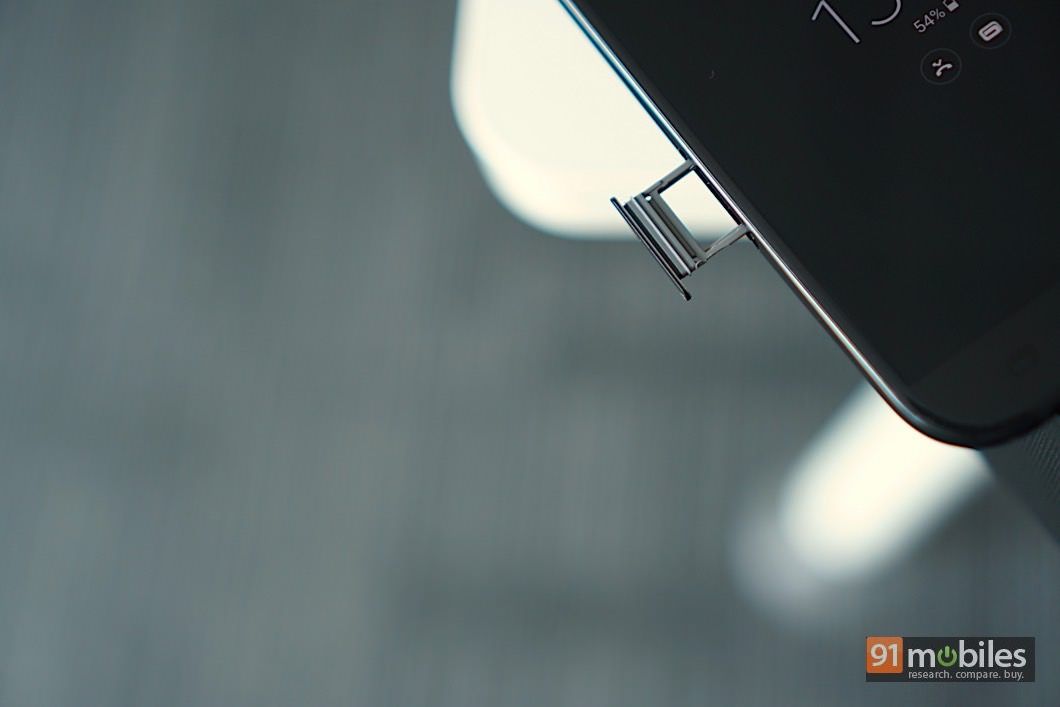 One important thing to note is that both the phones have IP68 certification for protection against light dust particles and are waterproof in depths of up to 1.5 meters for 30 minutes. This is a cool addition because it is not easy to find waterproofing in smartphones in this price range. Another thing I like about the design is that Samsung provides two separate trays, one for the primary SIM card and the other for the second SIM and a microSD card. I am glad Samsung doesn’t believe in going with hybrid slot for the memory card,

You can also use Samsung’s in-built Screen Mode, which can be found in the Settings app, to tune the colour temperature according to your preference. Samsung gives you the option to toggle between display modes like Adaptive display, AMOLED cinema, AMOLED Photo and Basic. I preferred the Adaptive display setting the most because it offers a good amount of pop to the colours. 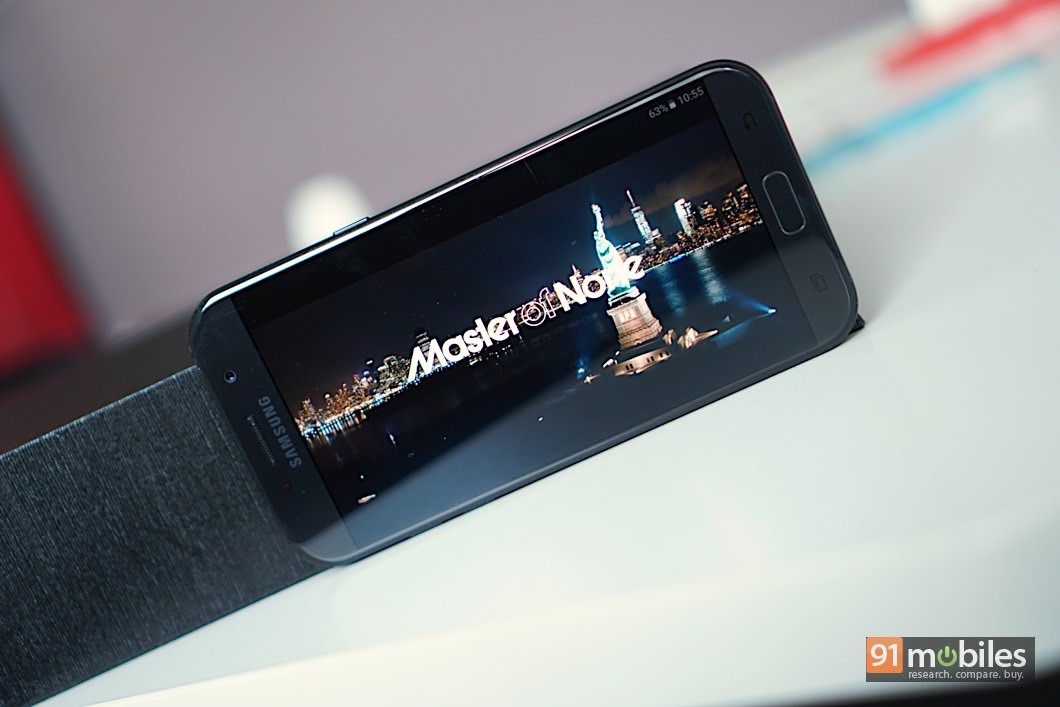 The display itself can get adequately bright and I had no issue whatsoever viewing it under harsh sunlight. The phones also carry forward the Always-On feature from the Samsung Galaxy S7. You can chose to keep a clock or two (or more) on the display, any pre-defined background, or a calendar. The notifications shown on the display are actionable and double clicking any specific notification directly jumps into the app.

Samsung’s Grace UX makes a comeback in both the smartphones but the core software is still Android 6.0 Marshmallow and not Nougat, which is definitely a downer. In Grace UX, Samsung does a very good job of hiding all the extraneous features of the software and bringing it up only when necessary. Nothing is in your face anymore. What this means is that by default you get a clean look with home screens, an app drawer, and the Briefing panel — which is nothing but a Flipboard-powered collection of news articles — that can be invoked by sliding left from the first home screen. 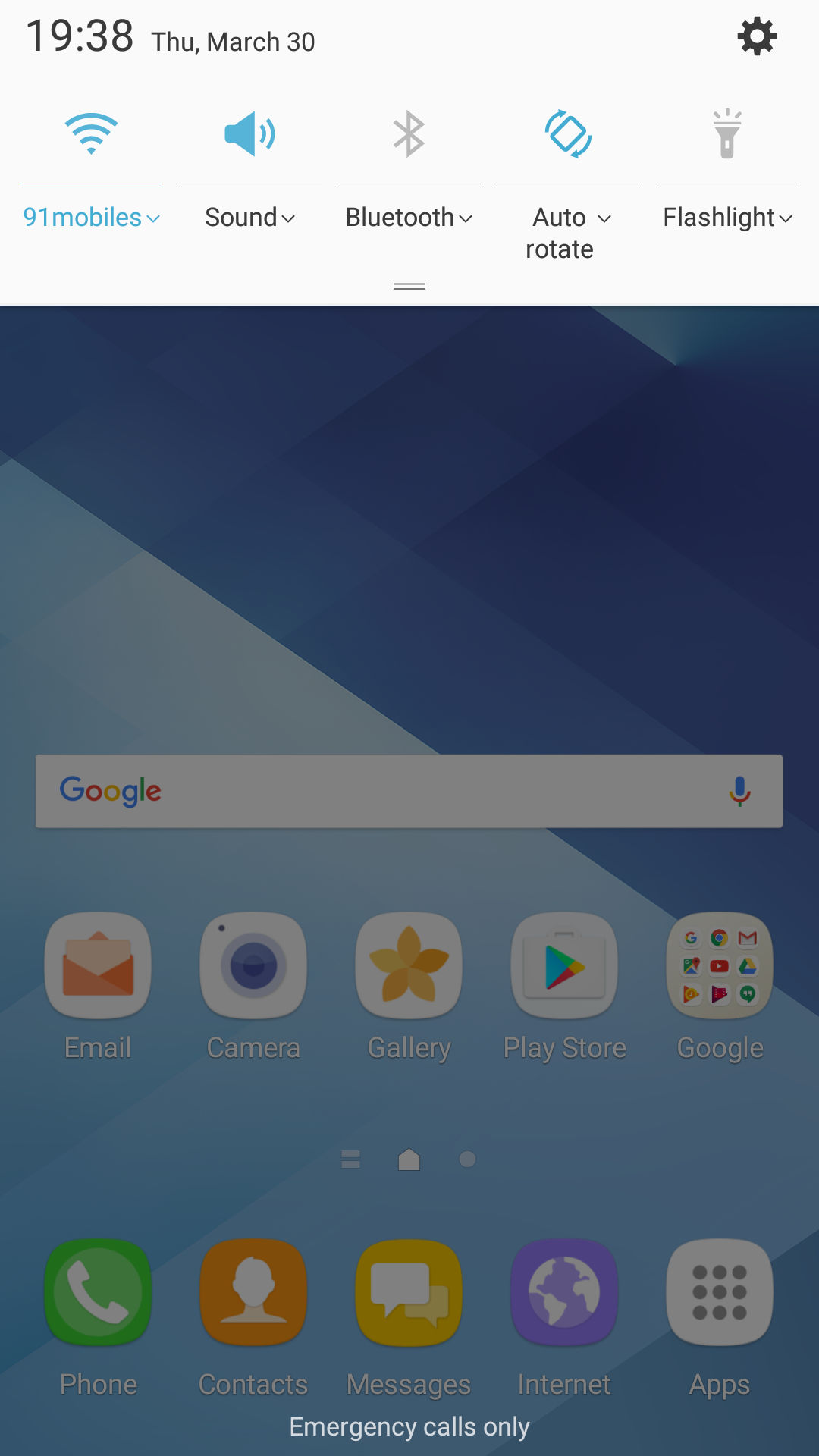 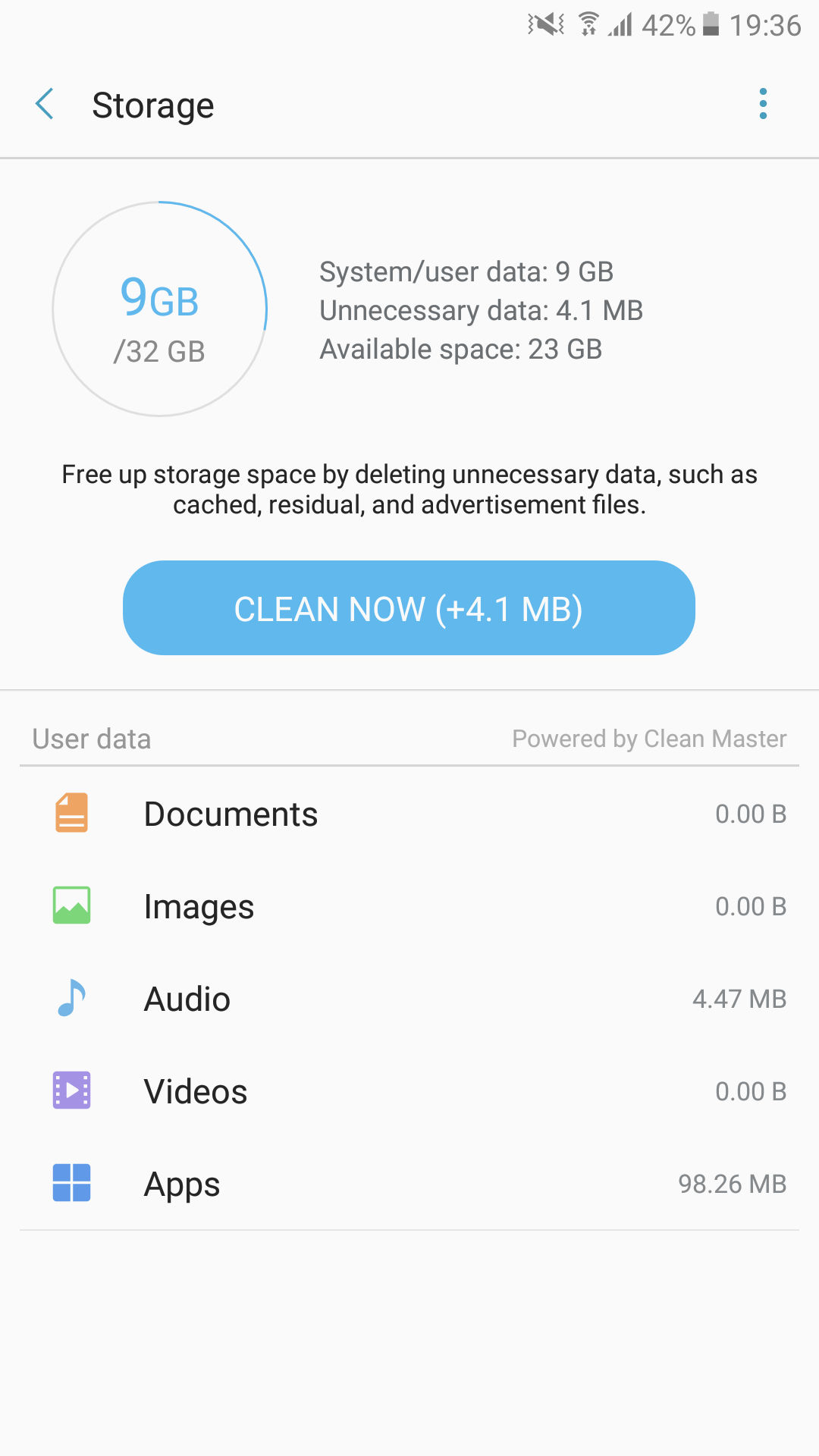 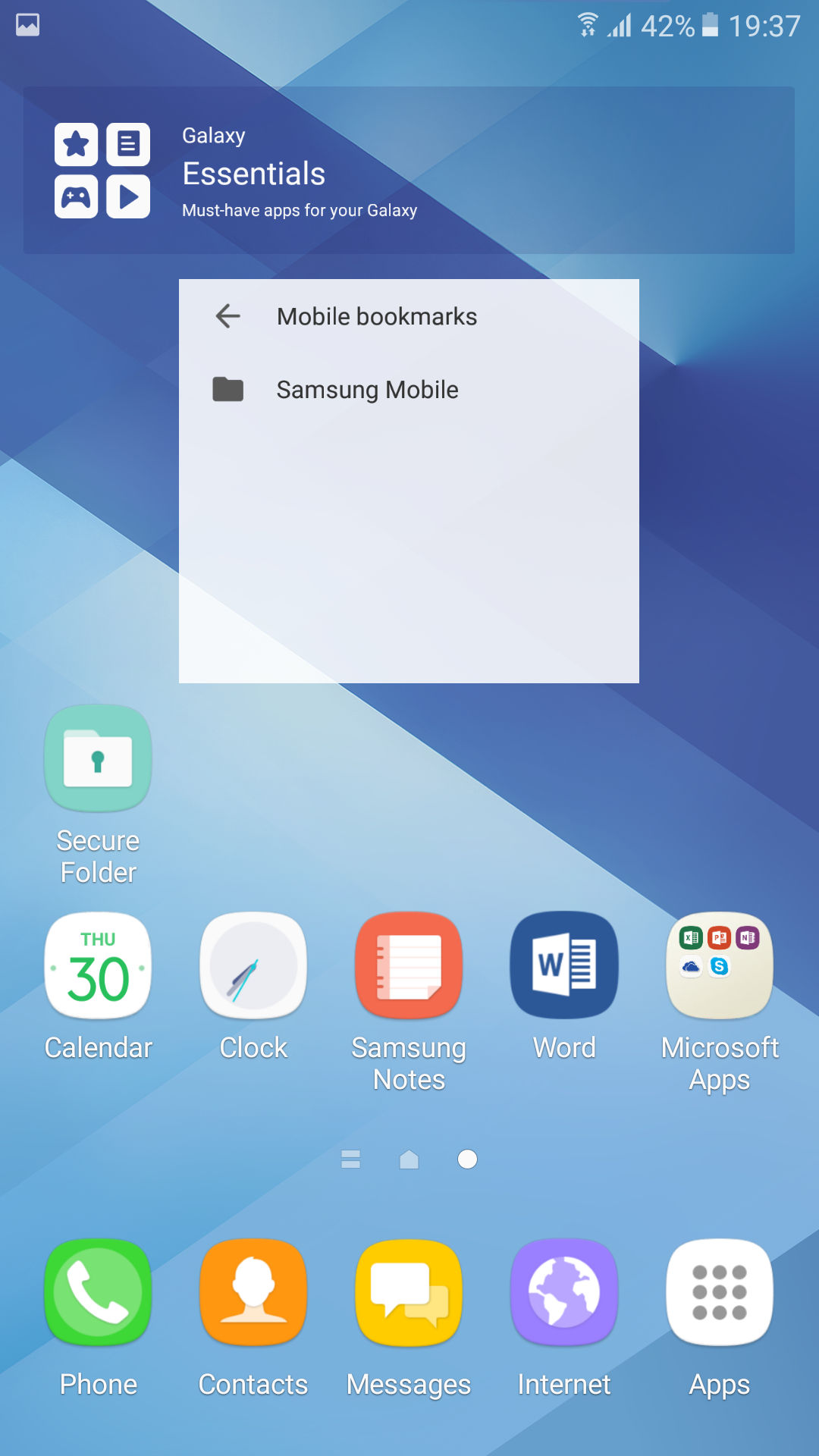 You get a plethora of third-party apps, including the entire suite of Microsoft’s Office apps, but thankfully all the apps can be uninstalled. The UX has a few additional features like split screen apps, windowed apps, a dedicated app called Game Launcher that lets you capture screenshots and record video among other things, gesture-based controls, and many many more. The software is loaded with more than you can ask for really.

The most unique and cool addition to the new Samsung A series phones is the support for Samsung Pay. I can’t emphasise enough on how awesome and liberating it feels to use your phone as a credit / debit card at retail stores. I really like how the company has seamlessly integrated Samsung Pay and made it work with the ubiquitous point-of-sale (POS) terminals. 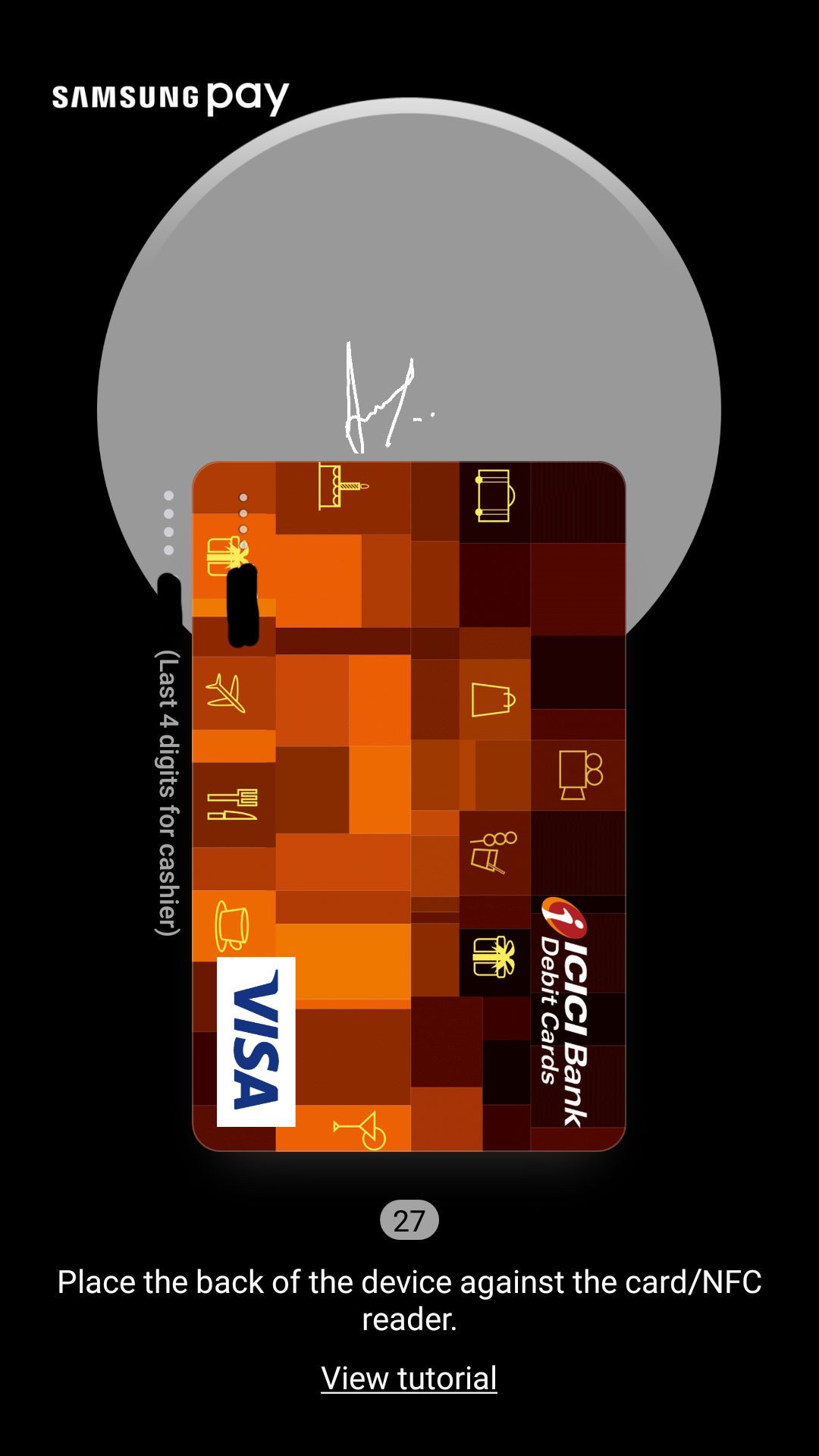 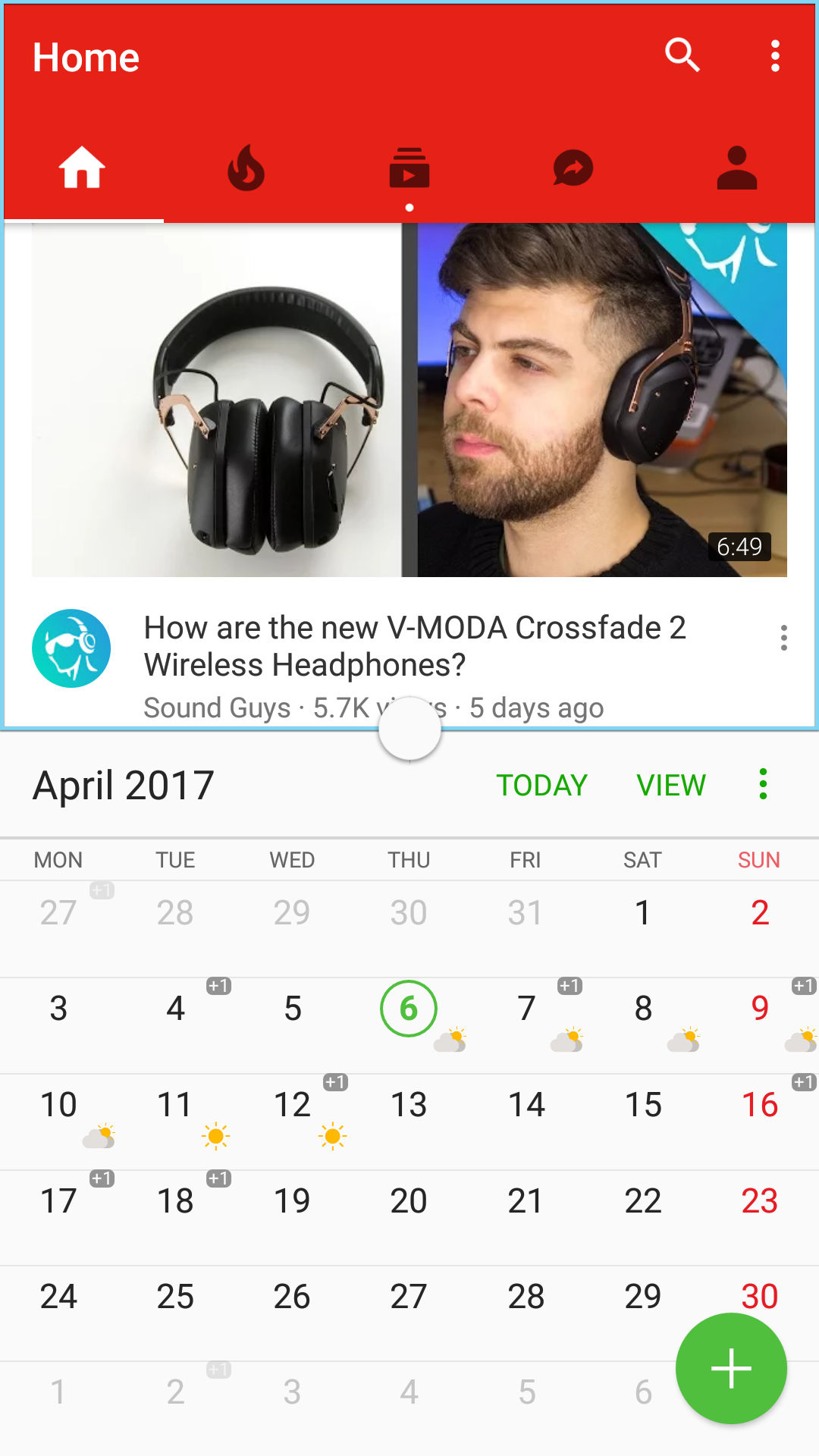 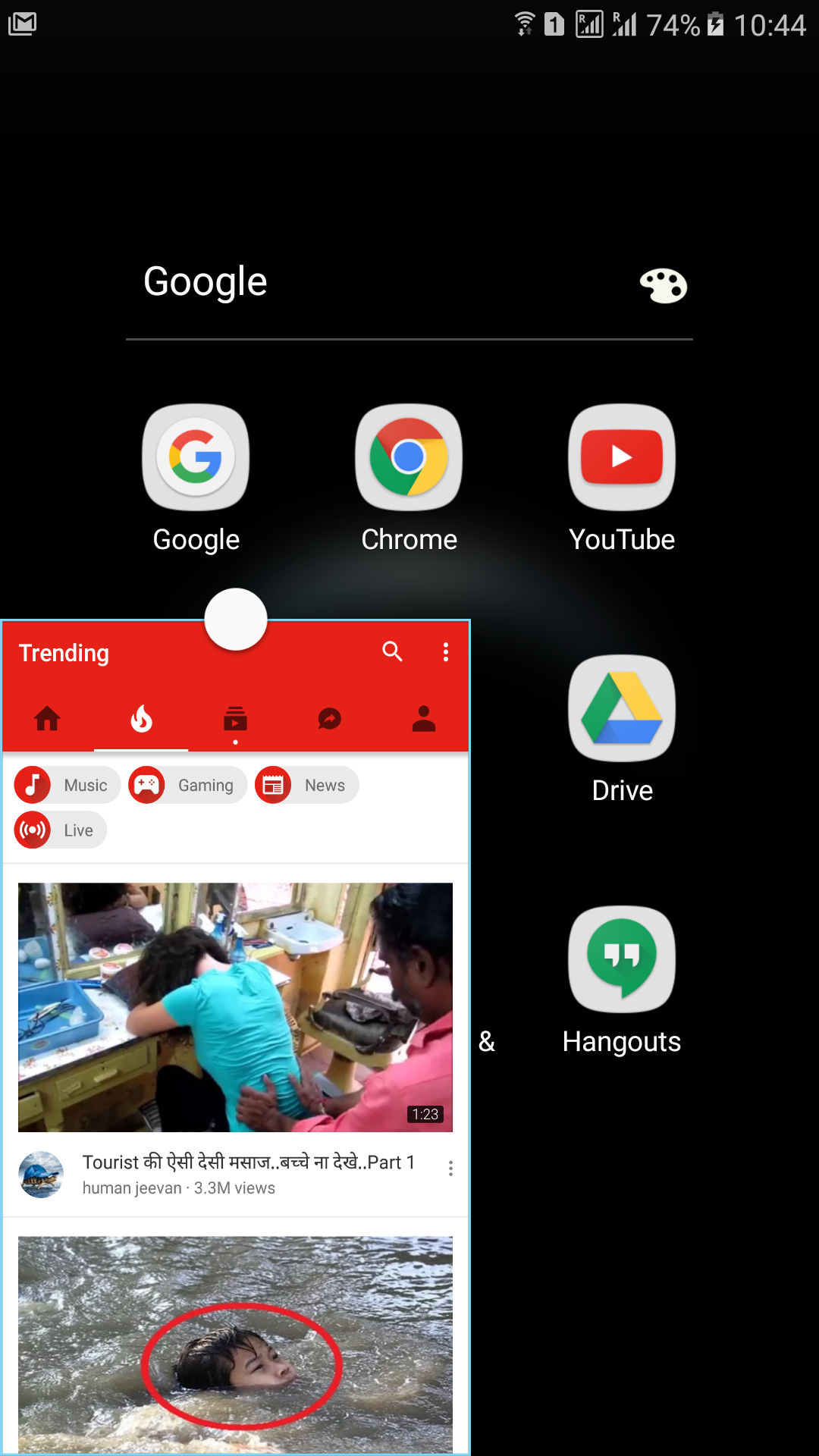 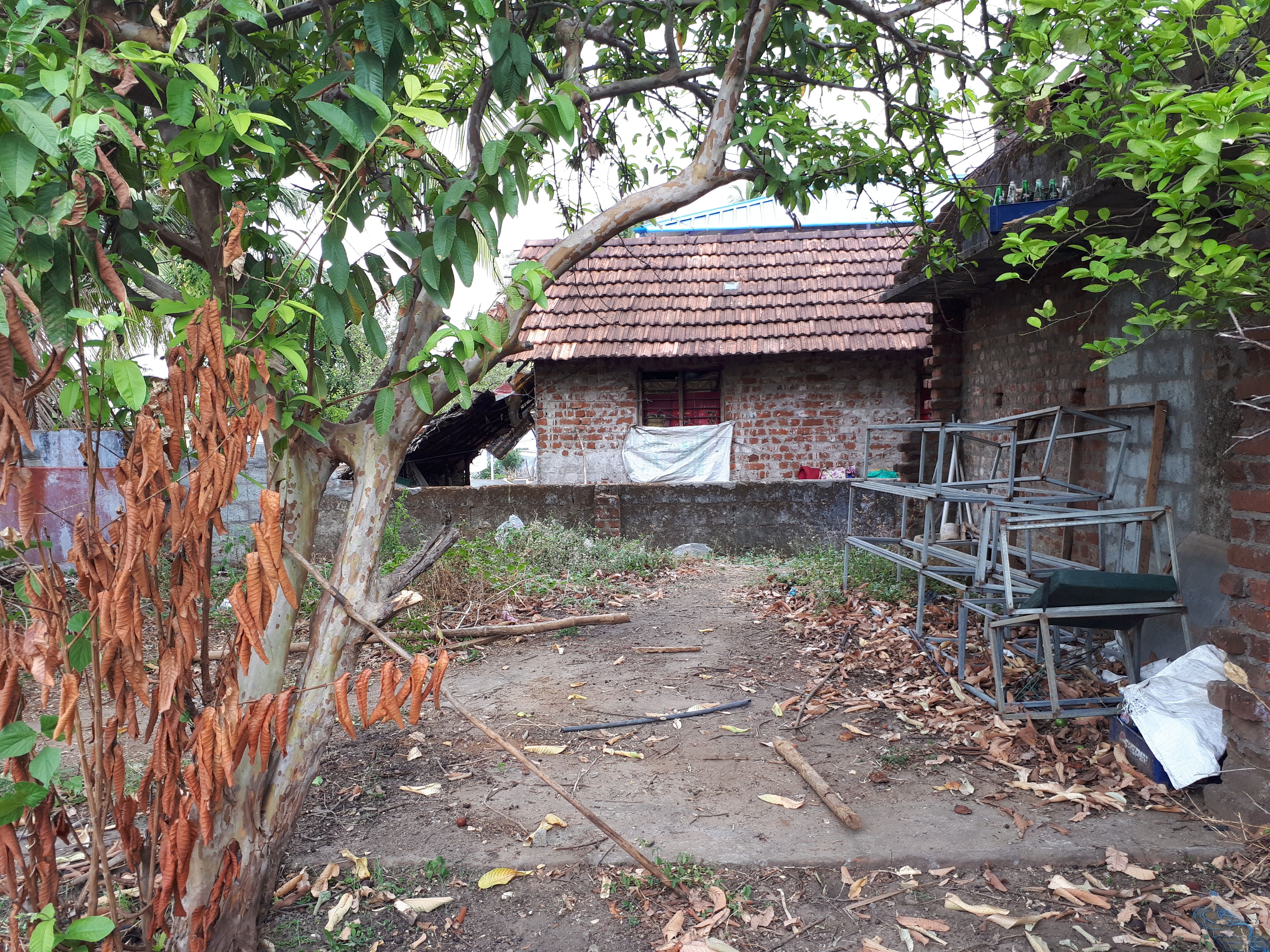 The 16MP camera captures really good images in daylight. All my samples had a great amount of details in each pixel with little to no softness around the corners of the image. The colours were vibrant — a little extra saturated for my taste — and even the barrel distortion was kept to a minimum. The dynamic range by default is pretty good and the HDR mode doesn’t really do much to improve the range, which is actually a good thing.

The camera software can also autofocus on the subject really fast; the shot-to-shot time is pretty good. Thanks to the f/1.9 aperture, you also get a decent amount of depth. Take a look at the image with the LED bulb in the gallery below, you will see a nice bokeh effect in the background. Having said that, the low-light performance is not too great and that is what separates the cameras on the Galaxy A5 (2017) and the Galaxy A7 (2017) from the wonderful cameras on the Galaxy S7 / Galaxy S7 edge (review). 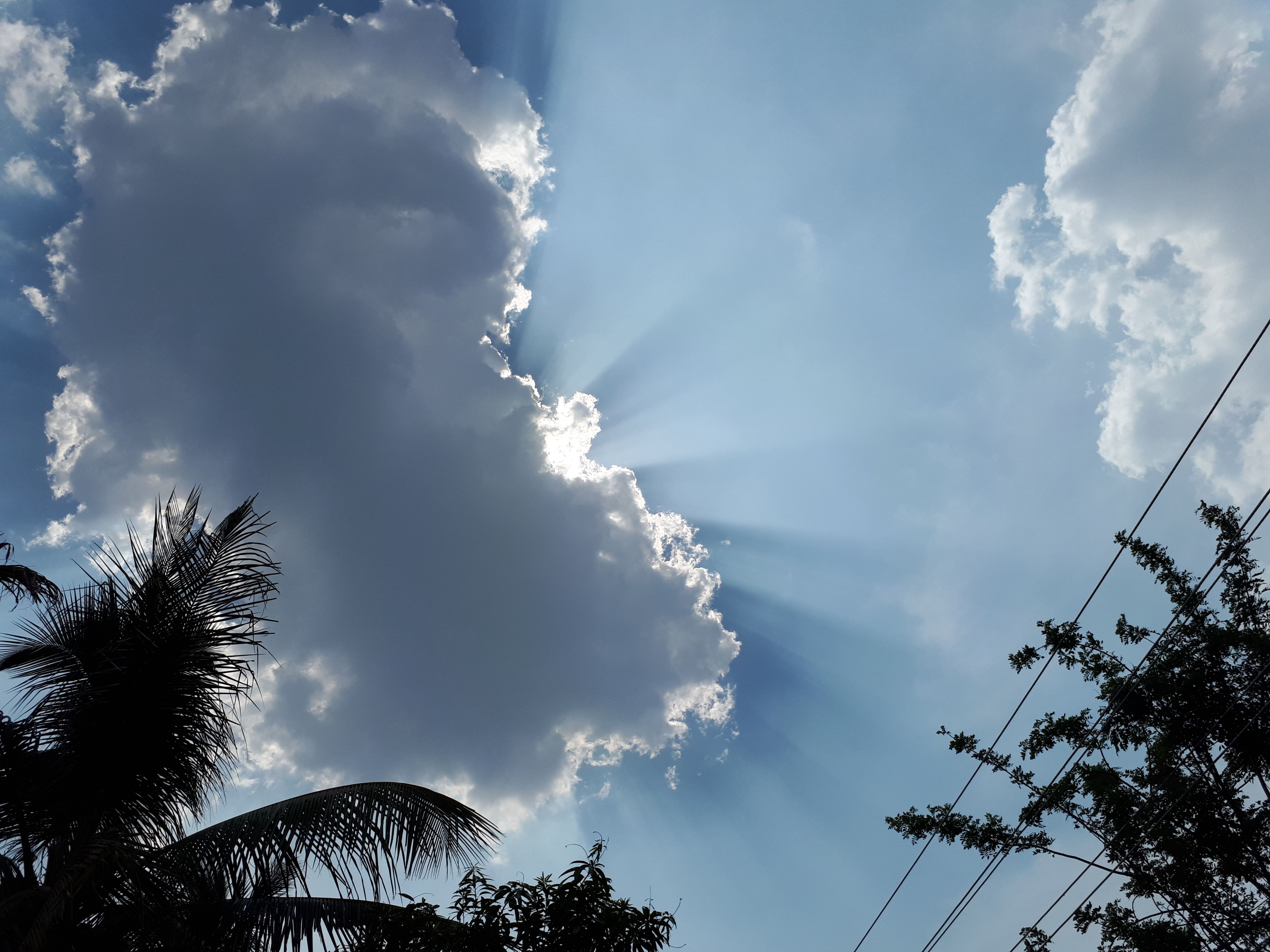 The camera app offers you a Pro mode as well, which lets you adjust the white balance, ISO, and the exposure, which is the bare minimum actually. A special Night mode manages to introduce more light to the image in lieu of the details. I am not a fan of that implementation actually. You can also record full HD (1080p) videos that look good but the lack of OIS is a downer especially considering the previous generation Galaxy A7 had it. Moving on, the 16MP front camera captures some incredibly detailed selfies. How good is it? Well, it is almost as good as any image captured by the rear camera and that’s saying a lot. But, don’t expect it to blow your socks away in low light. Thankfully, you get a screen flash to illuminate the entire scene.

Overall, I am mighty impressed by what Samsung has achieved with the cameras on both the smartphones. If only the rear camera had OIS…

Samsung has fitted the phones with its homegrown Exynos 7880 octa-core chips and 3GB of RAM. As for storage, you get 32GB with the option to expand it to 256GB using a microSD card. The Qualcomm chipset equivalent of the Exynos 7880 is the Snapdragon 625 SoC because both use eight Cortex A53 cores and are built on the 14nm fabrication process. The major advantage of using a 14nm process is that you get good battery life and it actually shows. In our battery test, the Galaxy A7 (2017) lasted 18 hours and 47 minutes, whereas the A5 (2017) lasted 17 hours and 31 minutes. These numbers are exceptionally good, and you can easily derive a day and half worth of usage from your phone on moderate usage. I regularly got a screen-on time of four to five hours on both the phones. 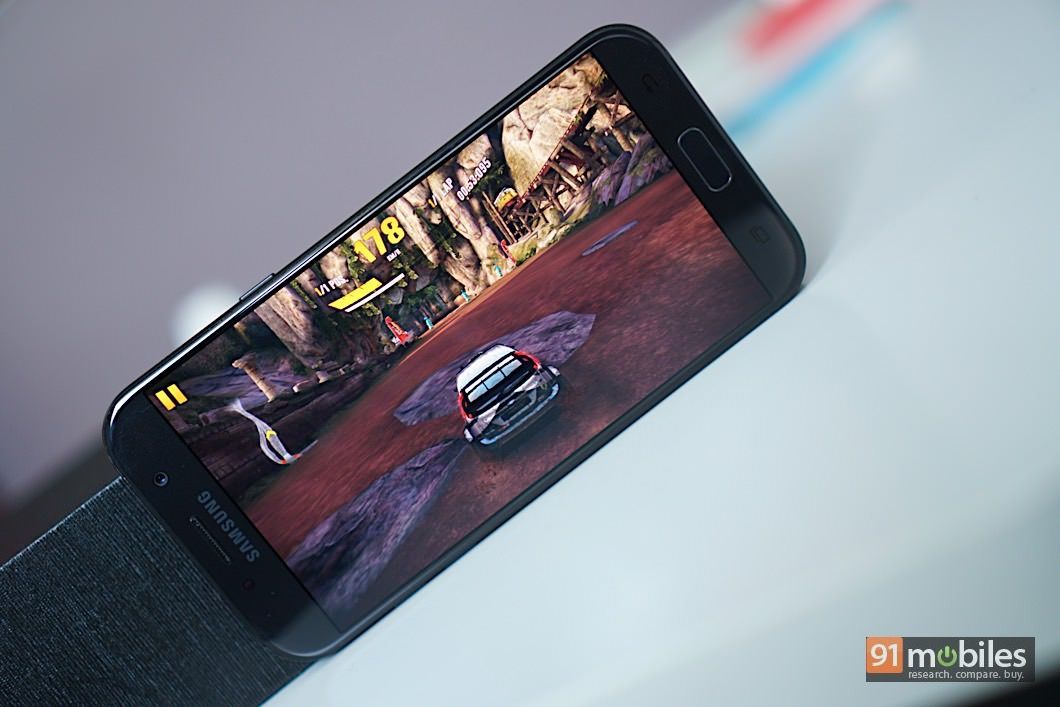 During my review period, I rarely faced any stutter while using the phones and you won’t either in daily usage. As far as gaming is concerned, you will actually notice that both the phones offer a far more stable and better performance when compared with the Snapdragon 625 directly. I played Modern Combat 5 and Asphalt 8 without any lags whatsoever. The phones, especially the Galaxy A7 (2017) thanks to the bigger screen estate, are also great for watching videos mainly due to the deep blacks offered by the Super AMOLED screen. Even the sound quality offered by the earphones is top notch. As is the case with most Samsung phones, the call quality is reliable and exceptional as well. You also get an extra volume setting while in a phone call in case the caller is not adequately audible. It works like a charm. During my testing period, I did notice a minor issue while switching back from the flight mode: the Galaxy A7 (2017) would actually take ages to latch on to a network in automatic search mode for some reason. 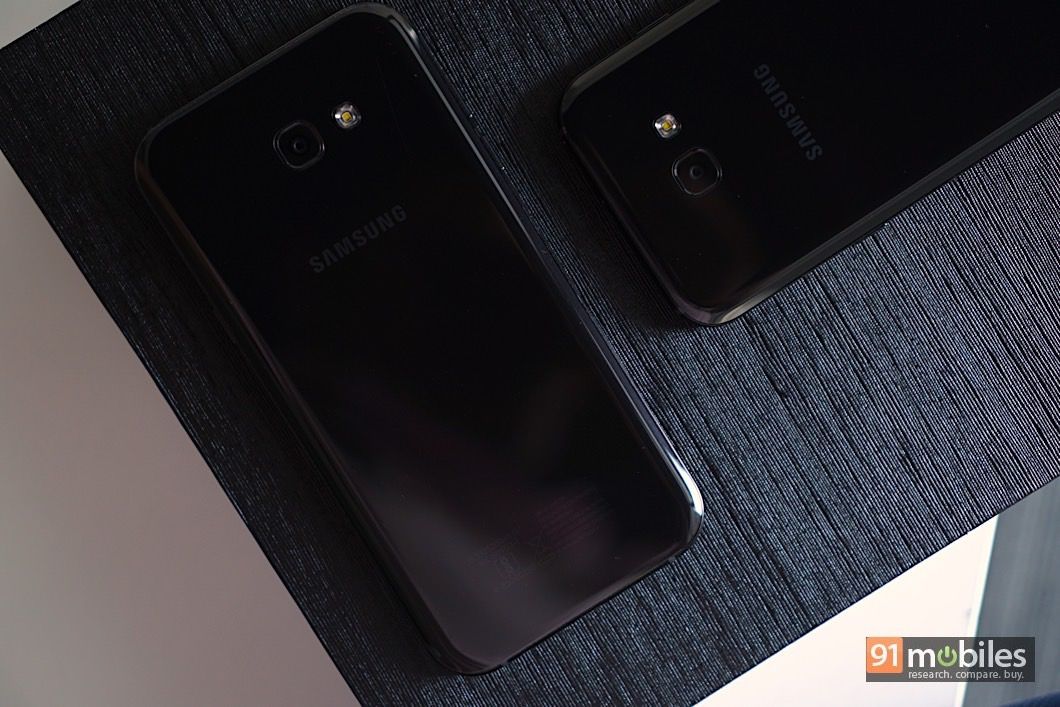 After spending time with the Samsung Galaxy A5 (2017) and Galaxy A7 (2017), I can confidently say that these are premium-looking smartphones that pack in a lot of punch. I liked the design, the display, the gaming performance, superior battery life, and the great cameras on the rear and the front. Apart from some minor issues, it is really hard to find any faults in the phones. Obviously, you won’t get the grunt of the OnePlus 3T’s (review) Snapdragon 821 SoC but there’s enough power to satisfy users who aren’t too demanding. Furthermore, the phones will be available for easy purchase in retail stores across the country. I consider this an added advantage for Samsung because offline presence is vital in a country like India where a lot of people still like to buy their phones from brick-and-mortar stores. Let’s not forget the Samsung Pay support on both these devices; it could actually go on to become quite a coveted feature in the future as far as payments are concerned.