“Go big or go home” seems to be the mantra that Samsung is living by this year, and the Korean giant has opted for a very aggressive stance in 2019. The latest from the brand’s stables – the Galaxy A70 – not only comes with one of the largest displays (6.7-inch) around, but also offers powerful specs. With a price tag of Rs 28,990, the handset is up against the Vivo V15 Pro (review) and other upper mid-tier smartphones such as the Nokia 8.1 (review). Of course, the threat presented by the POCO F1 (review) also looms large in this price band. So can then the Samsung Galaxy A70 stand out amidst the competition? Well, there’s only one way to find out… 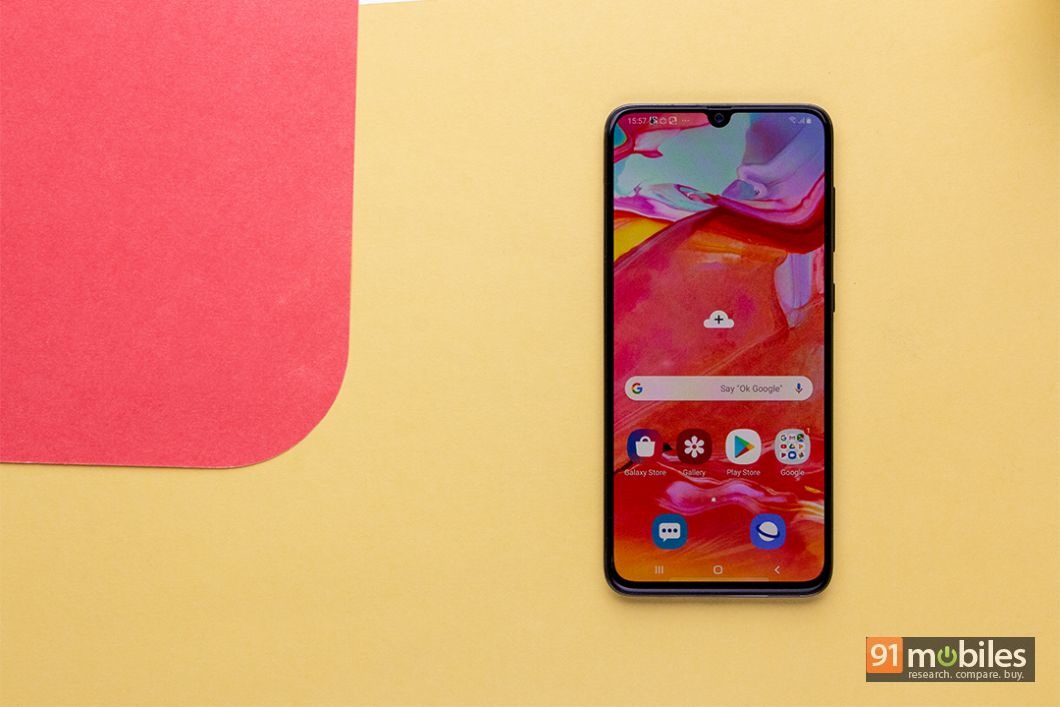 It was just in November that Samsung ventured into the notch-toting smartphone era with Infinity U, Infinity V and Infinity O screens. Featuring 19:9 aspect ratios, these screens offer tiny cut-outs or punch holes to hold the selfie shooters. But the brand’s latest goes a step further. It features an Infinity-V notch on an elongated panel with a taller-than-usual aspect ratio of 20:9. 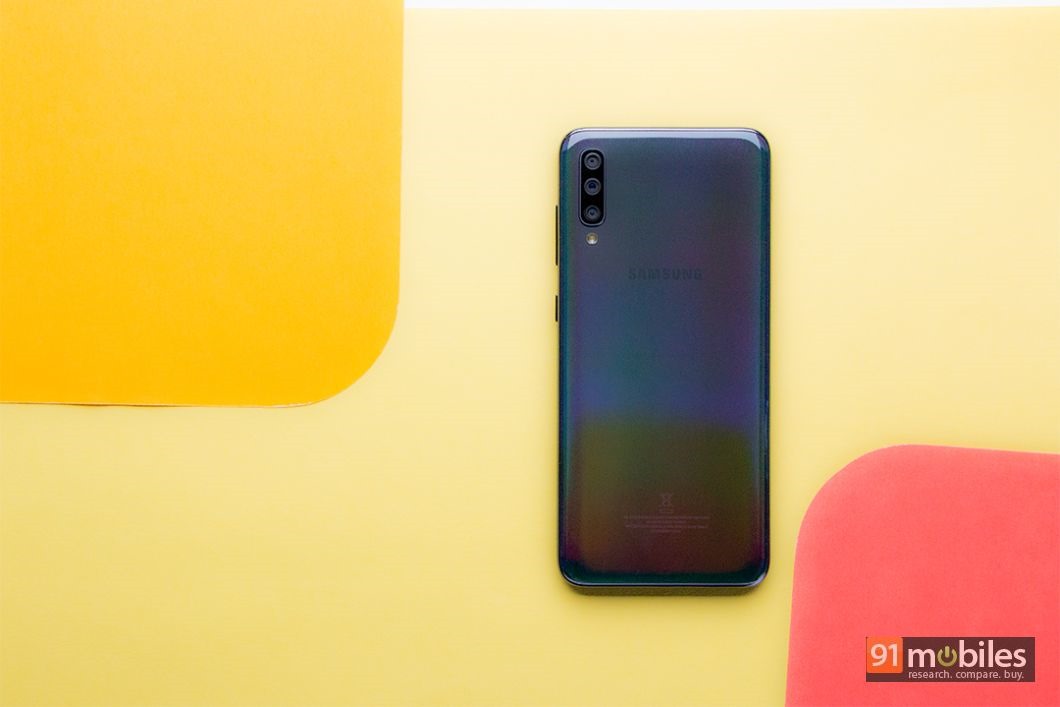 With a screen measuring 6.7-inches across, the Galaxy A70 is Samsung’s largest smartphone yet – even bigger than phones from the Galaxy Note range. Thanks to minimum bezels around the display, the device offers an immersive viewing experience with an excellent screen-to-body ratio of 93.4 percent. Couple that with the Super AMOLED tech and full HD+ resolution, and the A70 becomes a movie theatre that fits your pocket. As a matter of fact, on a recent journey, I binged quite a few TV show episodes on the smartphone without feeling the need of a bigger display. Though the screen does seem reflective outdoors, the brightness levels are quite good and one can’t complain about viewing angles either. Considering it’s an AMOLED panel, you also get the always-on display feature. 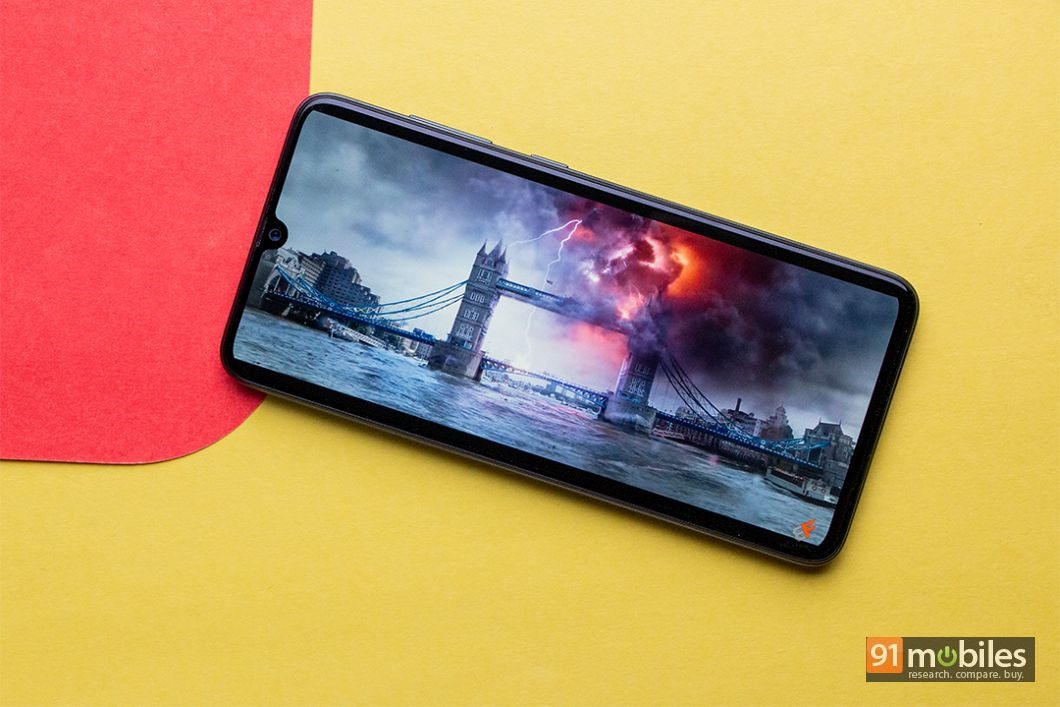 Similar to its A30 (review) and A50 (review) siblings, the Galaxy A70 features a shiny, glossy rear panel. And while it might fool you into thinking that it’s glass, it’s actually made out of polycarbonate, which makes it slightly more durable. That’s not to say that it’s able to keep fingerprints away or doesn’t slip when your hands are sweaty. That said, the dual-curved rear does add to the grip and the phone’s weight (at 183g) has been kept in check too. Additionally, you get a transparent cover in the box to protect the smartphone.

The Samsung Galaxy A70 isn’t much different from its brethren when it comes to the placement of buttons and ports. Sadly however, the speaker grille is placed at the bottom, which means that your hands can muffle the audio when you use the handset in landscape mode.

Similar to its younger sibling, the Galaxy A50, the Samsung Galaxy A70 ships with triple shooters on its back. The primary snapper however, gets an upgrade to a 32-megapixel sensor with an aperture of f/1.7, while the secondary and tertiary cameras continue to be wide-angle and depth sensors rated at 8MP and 5MP, respectively. Selfie aficionados will love the presence of a 32-meg shooter on the front. 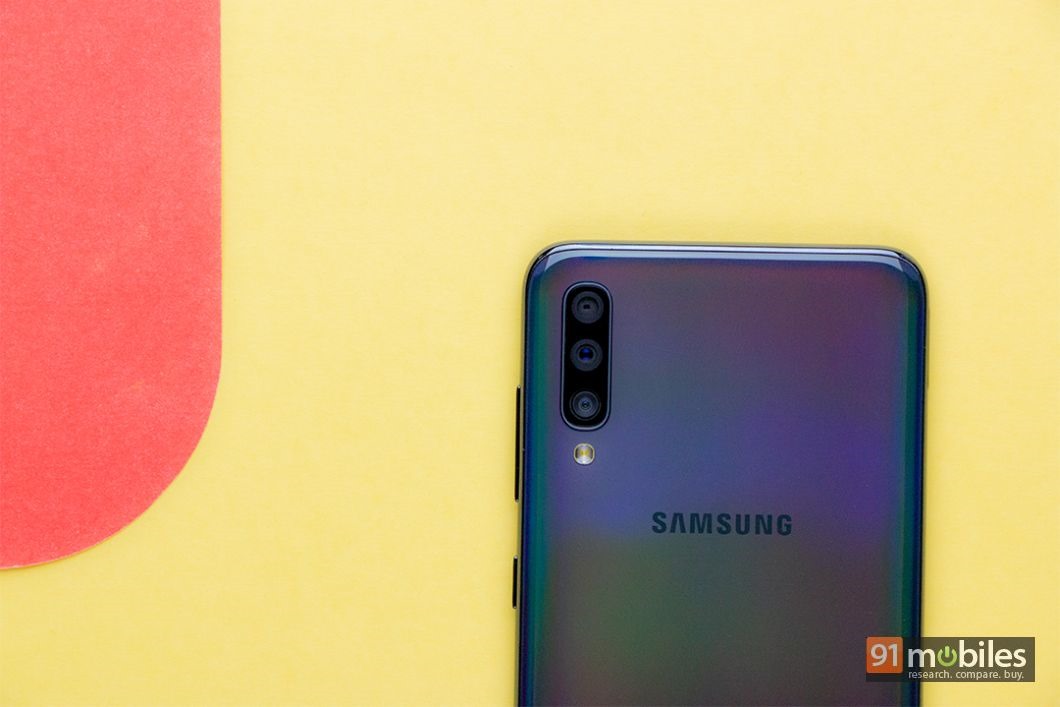 The camera app will be familiar to anyone who has used a Samsung smartphone recently. Upon launch, you’ll find the shutter button in the centre at the bottom, sandwiched between the preview gallery and a toggle for the front camera. Above it, there are the usual shooting modes – photo, video, slow-mo, super slow-mo, live focus, pro and panorama. You can also enable the wide-angle shooter with a single tap. Up top, you’ll find the settings gear, flash and self-timer toggle, the ability to change the aspect ratio, as well as filters and beauty effects.

The Samsung Galaxy A70 is a capable shooter that does justice to all scenes being captured. Landscapes have a great amount of detail, and the colours are quite punchy too, adding to the charm. Close-up shots are impressive as well, with the main camera offering a faux-bokeh effect. The secondary wide-angle shooter is pretty capable too and keeps the fish-eye effect in check. Of course, you can enable the Live Focus mode to use the 5MP depth-sensing unit, which does a great job by separating the background from the subject. However, if you notice closely, the edge detection isn’t great and elements like the hairline and ears of a person look soft. Thanks to a wide aperture, the A70 works quite well in dim environments.

Samsung Galaxy A70 camera samples
1 of 11

For videos, the smartphone can capture up to 4k clips, while super slow-mo footage is capped at 720p. While videos aren’t bad as such, the lack of OIS means that you’ll need to keep your hands very steady to get smooth output. Selfies are definitely a highlight of the A70, as they have ample level of details, while ensuring that the picture isn’t looking too artificial. 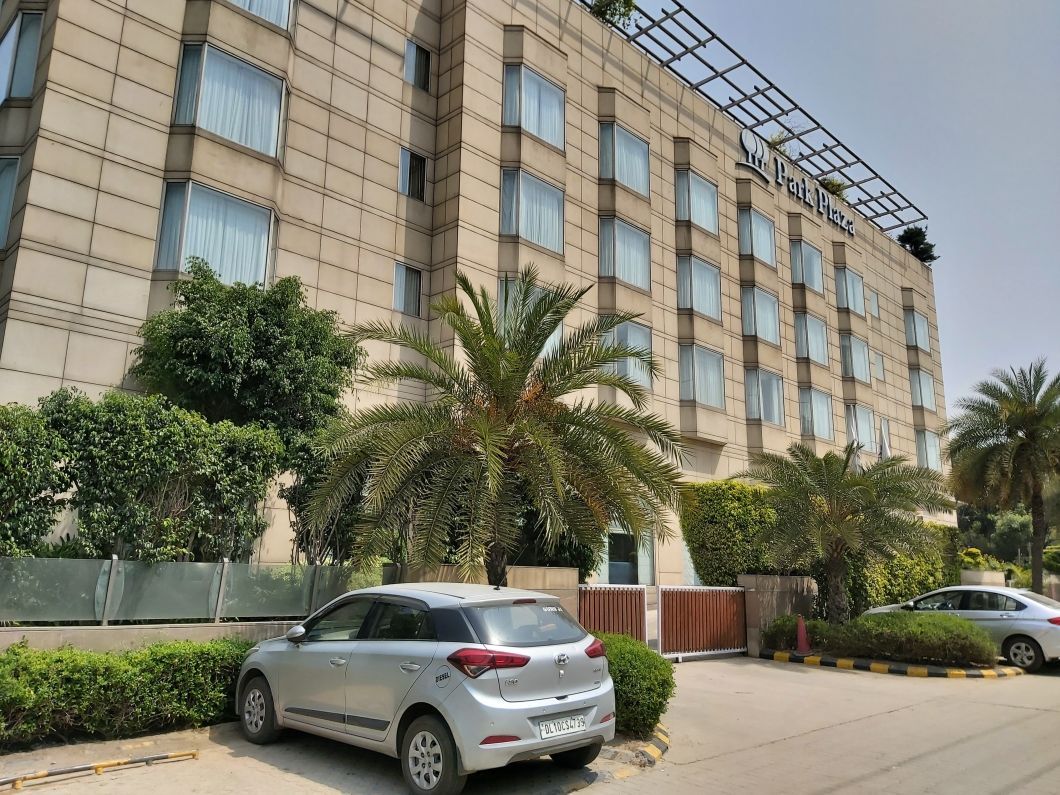 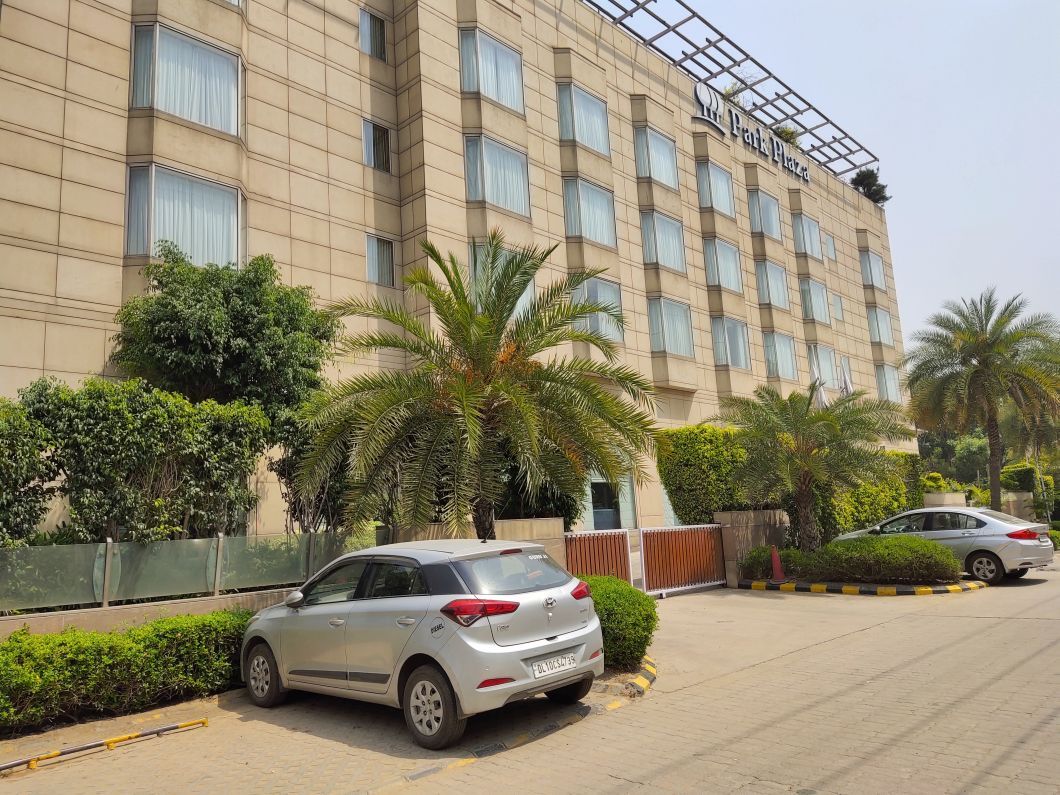 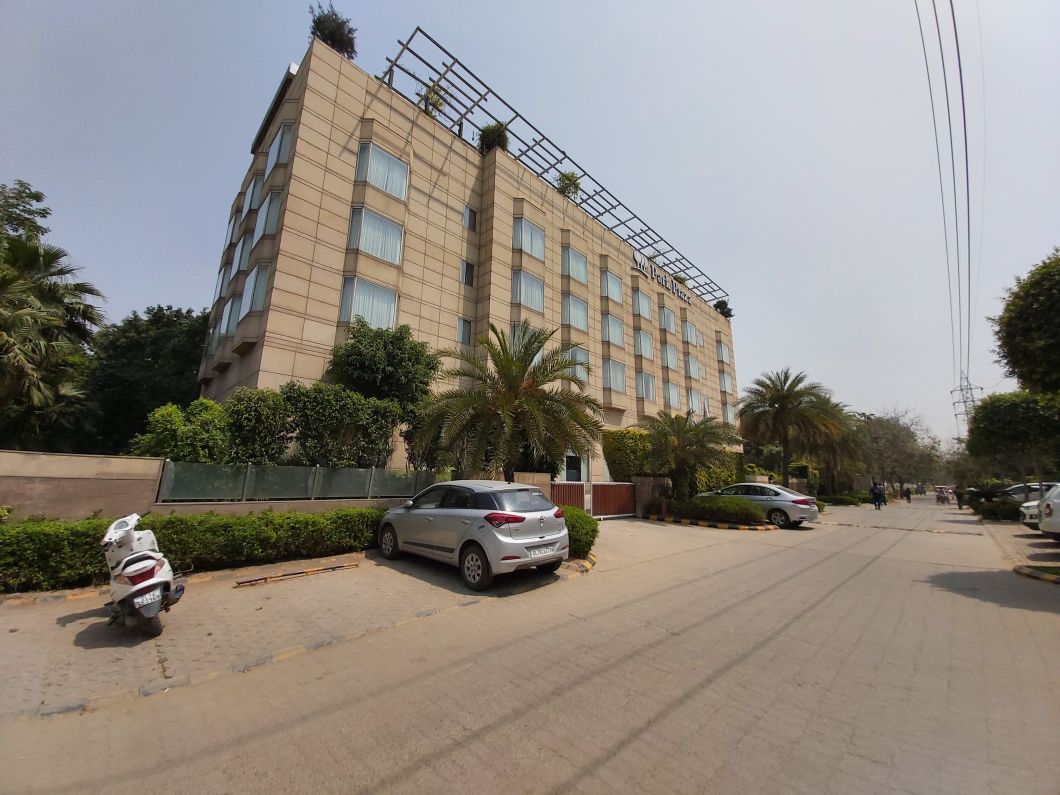 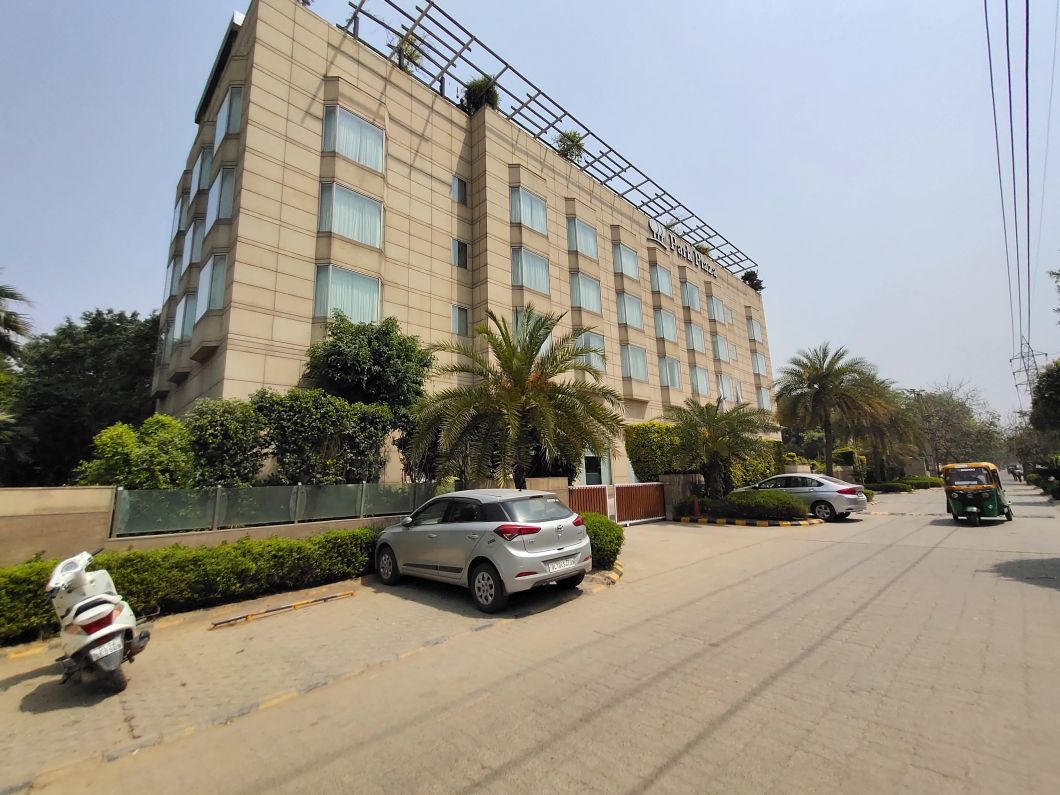 Comparing the Galaxy A70 with its closest competitor, the V15 Pro, you’ll be surprised by the results. While Samsung’s phone cameras usually offer oversaturated colours, Vivo’s phone offers punchier output which is quite pleasing. Furthermore, even though the V15 Pro shoots in 12MP in the default mode (it has a 48MP shooter), it seems to offer better sharpness levels. Interestingly however, the A70’s wide-angle shooter fares better as it doesn’t have a prominent distortion effect and the images don’t turn out grainy either. In low light, thanks to pixel binning, the V15 Pro maintains its lead. However, when it comes to selfies, the exact opposite happens. While the details are quite similar as both smartphones ship with 32-meg selfie shooters, the Samsung handset delivers more natural-looking output. So overall, both the A70 and V15 Pro are impressive shooters, and it’ll boil down to your preference while choosing one among the two. 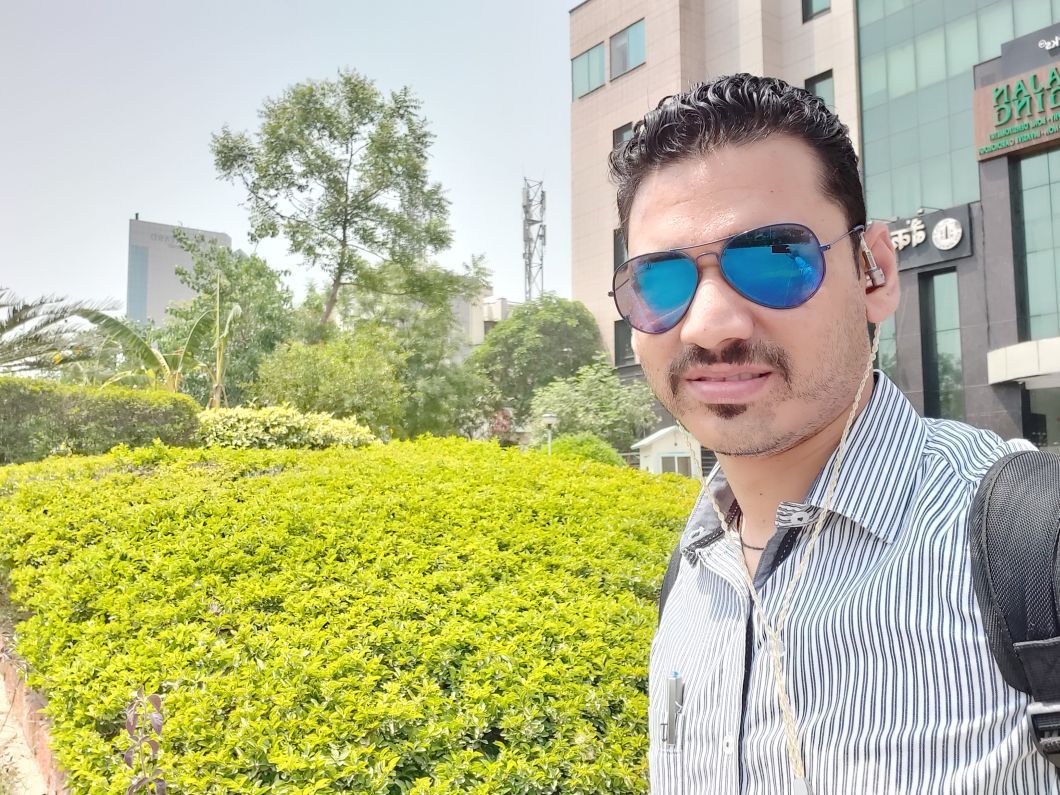 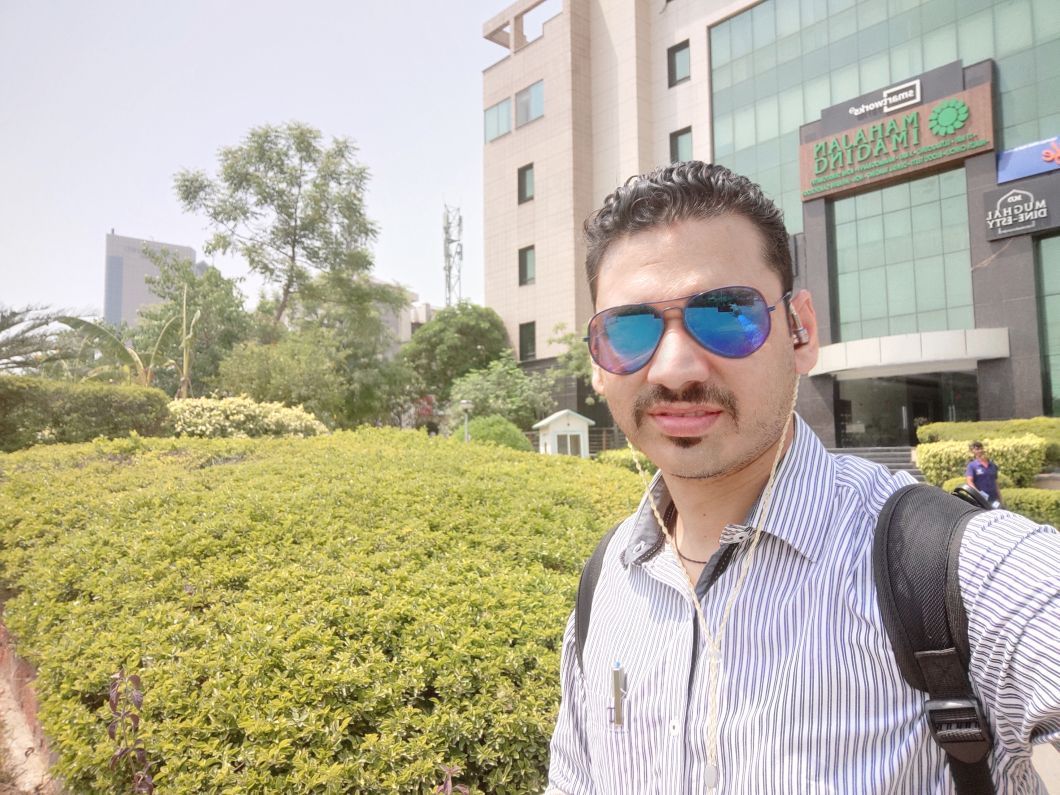 Yet again, the Samsung Galaxy A70 seems to be a close match to the Vivo V15 Pro. Under the hood, the Samsung handset packs the 11nm Snapdragon 675 octa-core chipset, which comes with two Kryo 460 cores running at 2GHz, while the remaining Kryo 460 cores run at 1.7GHz. The SD675 is aimed at gamers and comes with 612GPU along with game optimisation tools to reduce janks. The smartphone surely delivers on this aspect. Even though I won’t classify myself as a gamer, I was glued on the Galaxy A70 for hours playing PUBG, and Unkilled. There was no lag at all, and the phone keeps its thermals in control too. 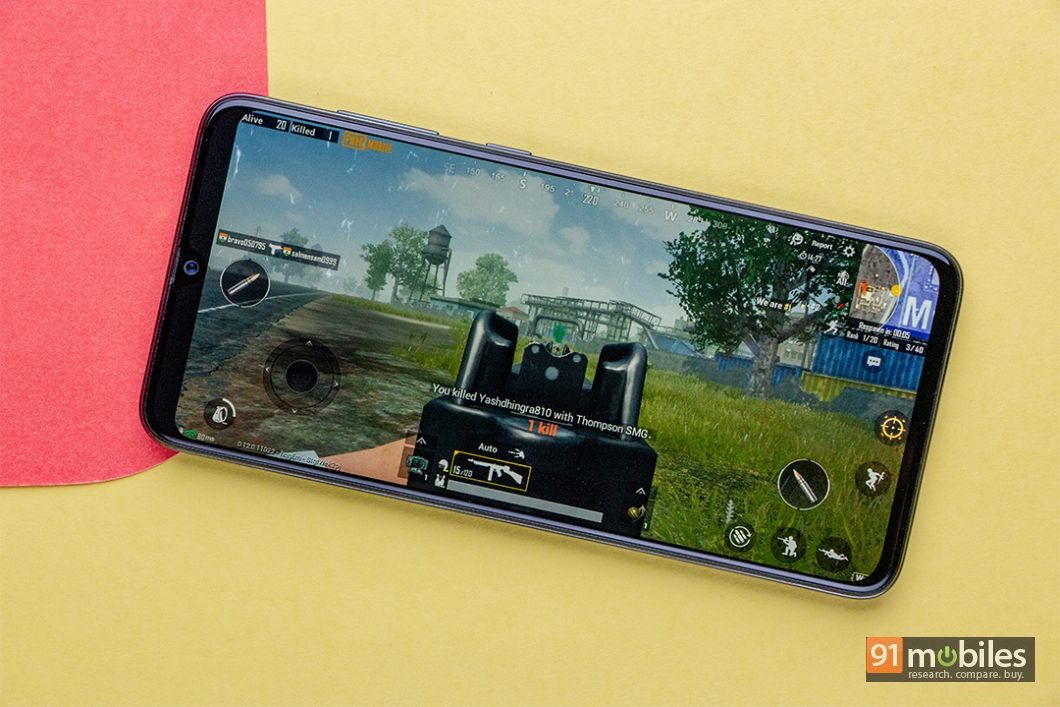 The processor is coupled with 6GB of RAM that ensures that the A70 is able to offer smooth usage. Even with multiple apps open in the background, the handset was able to ensure lag-free performance and switched between them quickly too. Having said that, there were a couple of instances where the phone froze, which I’m willing to believe is a software issue.

Taking care of storage requirements on the Samsung Galaxy A70 is 128GB of memory. Users will be able to access around 110GB, and if required, expand it further up to 512GB with the use of a microSD card. The good thing is that you wouldn’t need to compromise on the dual-SIM functionality to extend the memory.

Similar to its A series siblings, the Galaxy A70 ships with OneUI out of the box, which runs atop Android 9.0 Pie. We’re big fans of this new, minimal-looking custom interface from Samsung. What I didn’t appreciate though was the fact that the device prompts you to install a number of third-party apps upon first boot, although you can choose to skip installing them altogether.

The Samsung Galaxy A70 is the most powerful offering in the new Galaxy A series when it comes to the battery. That’s because the phone comes with a 4,500mAh cell, which ensured that I didn’t need to charge the phone until the next morning, and sometimes, the next afternoon. I usually got a screen-on time of around six hours, which is impressive indeed. On PCMark Battery benchmark, the smartphone managed to last 14 hours and 52 minutes, which is astounding, to say the least.

The Galaxy A70 is also the first smartphone in the A range to come with 25W fast charging support. This ensures that the phone can juice up rather quickly. As part of our test, the device took a little over two hours to go from 10 percent to 100 with the bundled adapter.

The Galaxy A70 is yet another device that shows that Samsung is changing with the times. Not only does the smartphone pack in enough to ward off the competition, but also has enough USPs to attract potential buyers, including a large and immersive display, attractive build, great imaging experience, powerful specs… all backed by a sizeable battery. 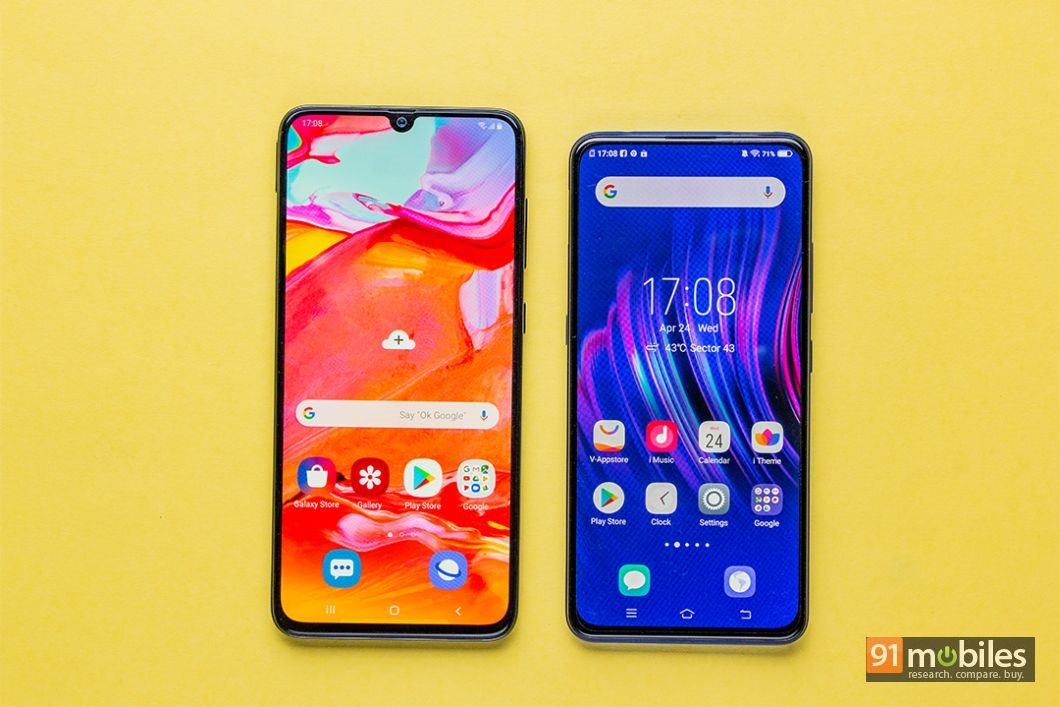 Of course, all of that may not be enough to sway consumers, especially when we consider the competition from the flagship-grade POCO F1. The debut device from Xiaomi’s sub-brand comes with the top-of-the-line Snapdragon 845 chipset, which makes it a hard-to-ignore proposition. When it comes to choosing between the A70 and Nokia 8.1, it all depends whether you value stock Android enough to forgo the triple-camera goodness and battery prowess that the Samsung phone brings to the table. On paper, the Vivo V15 Pro is the closest rival, and if you don’t find the pop-up selfie shooter enticing enough or are worried about its durability, then the A70 would be a better choice.

All in all, if you’re looking for a solid option in the Rs 25k-30k price bracket, then the Samsung Galaxy A70 makes a strong case for itself.