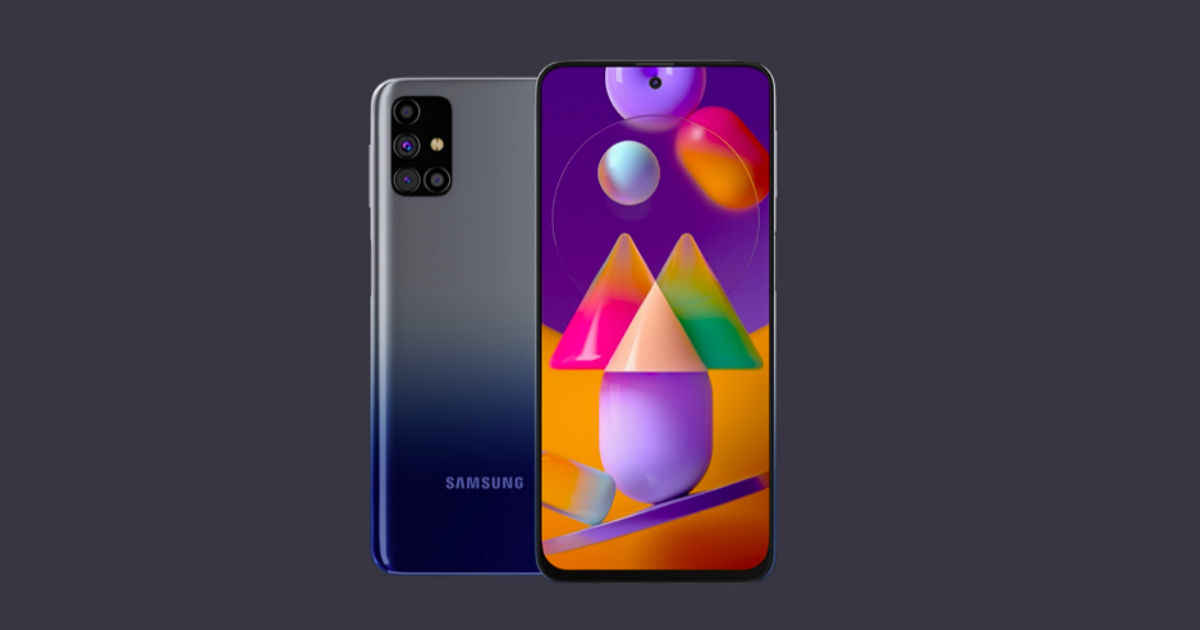 The Samsung Galaxy M31s is impressive from the word go. Its main draw is the fact that it brings several premium features from flagship Samsung devices into the M range, which is known for its low asking prices. Among them is the segment-leading sAMOLED Infinity-O display, 25W fast charging support, and an exquisite gradient design. But more importantly – and this is where all your focus should be – it carries on its back the most versatile quad camera setup in its price range. The 64MP Intelli-Cam onboard the phone is just mind-blowing when it comes to the sheer number of options it throws open for you in the photography and videography departments. Let’s take a look at why it makes the Samsung Galaxy M31s the best phone under Rs 20,000. 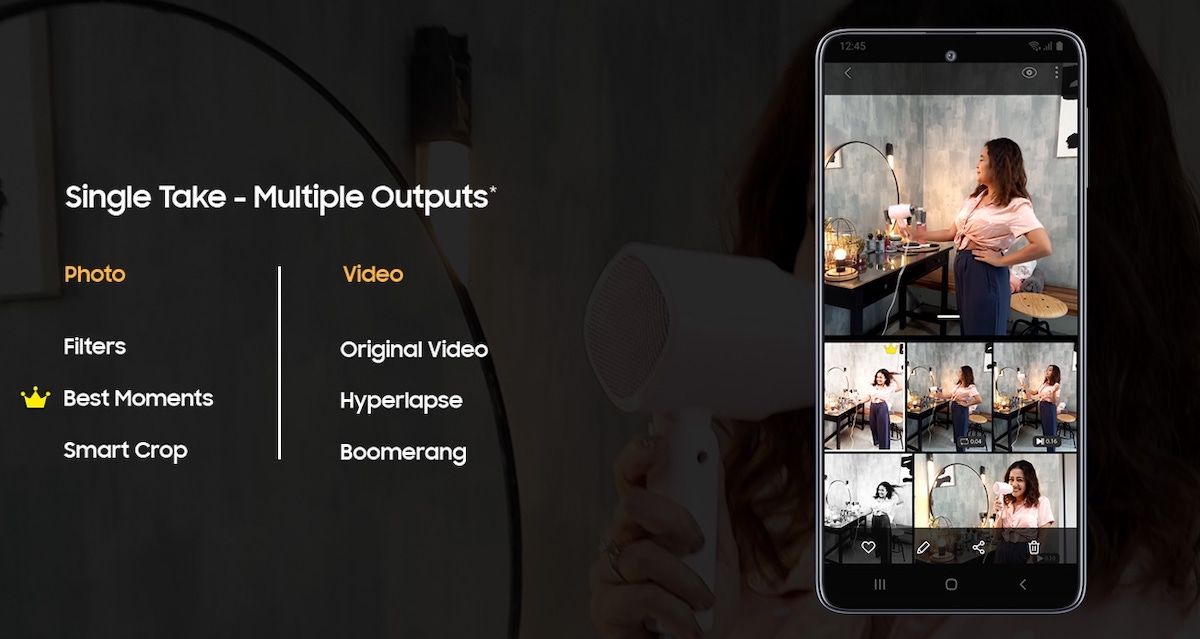 Single Take significantly reduces the confusion you experience when you are indecisive about how to best click it right before clicking a photo. It uses the 64MP Intelli-Cam onboard the Galaxy M31s to capture one moment in up to 10 unique ways, both photos and videos. While photos are enhanced with the help of special filters and smart crops, the videos get the Boomerang and Hyperlapse treatment, making them stand out. And Single Take lays all the options out in front of you in a neat manner, so you can easily discard the ones you don’t like and keep the rest. With a single click, you can get up to 3 Best Moments shots, up to 2 images with Samsung filters, and up to 2 shots with Smart Crop. Along with those, you will get the original video, a Hyperlapse version, and a Boomerang! With so many options to choose from, you can get all the perspectives you want, and then some, to add to your memories. 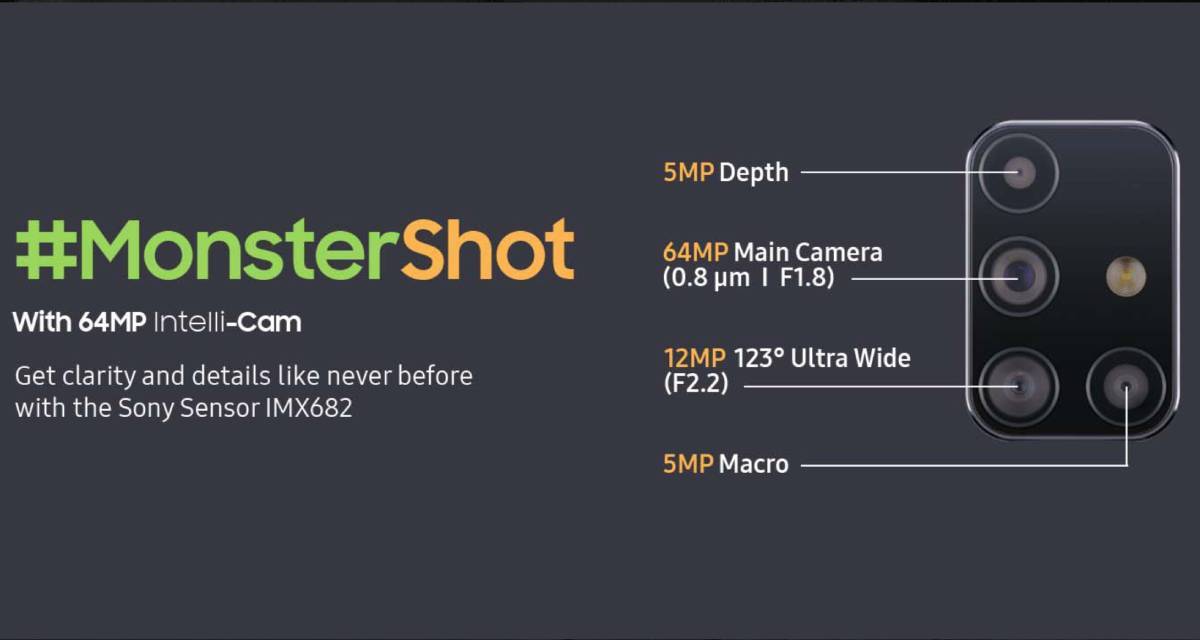 The four cameras on the back of this device are headlined by the 64MP Intelli-Cam, which boasts of the Sony Sensor IMX682. This is the first time any M series device has espoused this sensor. Moreover, it has been paired with an f/1.8 lens and bears a pixel size of 0.8-microns, which makes it a beast when it comes to night-time photography. Below this camera sits a 12MP ultra wide-angle snapper, which gives you a completely new perspective of your subjects. By offering a field of view as wide as 123-degrees (the same field of view as that of the human eye), this camera allows you to click professional-grade images on the Galaxy M31s.

The new Samsung powerhouse also sports a 5MP depth sensor to offer portrait effects. And yes, the famed Live Focus feature is also present on it, which allows the phone for offer real-time portrait effects, so you don’t have to wait until the image is clicked to see how it looks. The fourth camera onboard the M31s is a 5MP Macro shooter, which can capture clear and detailed images of subjects that are as close as 4cm from the lens. All these cameras create a mighty combination that ensures you’re never left wanting for more. 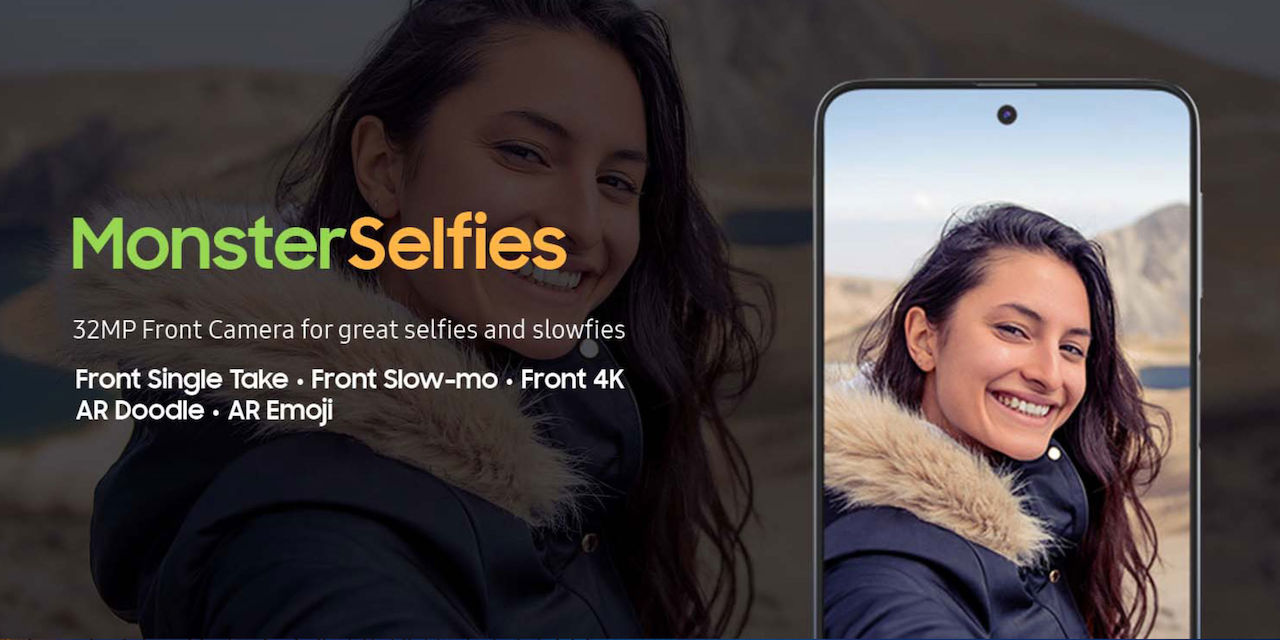 Social media lovers can’t do without their selfies, so the Samsung Galaxy M31s is exactly the device they need. That’s because it ships with a 32MP selfie camera that’s lodged in the centre-aligned hole-punch cutout. What’s excellent is that the Single Take feature that we’ve mentioned above works on the front camera as well – more shots with just one click. Vloggers, YouTubers, and Instagram stars can rejoice as 4K videos are also possible even via the front camera on the new smartphone. And as if that wasn’t enough, you also get support for capturing Slow-Motion selfies or slo-fies with this shooter. Lastly, the 32MP selfie camera has been laced with fun AR Emoji and AR Doodle features that make your 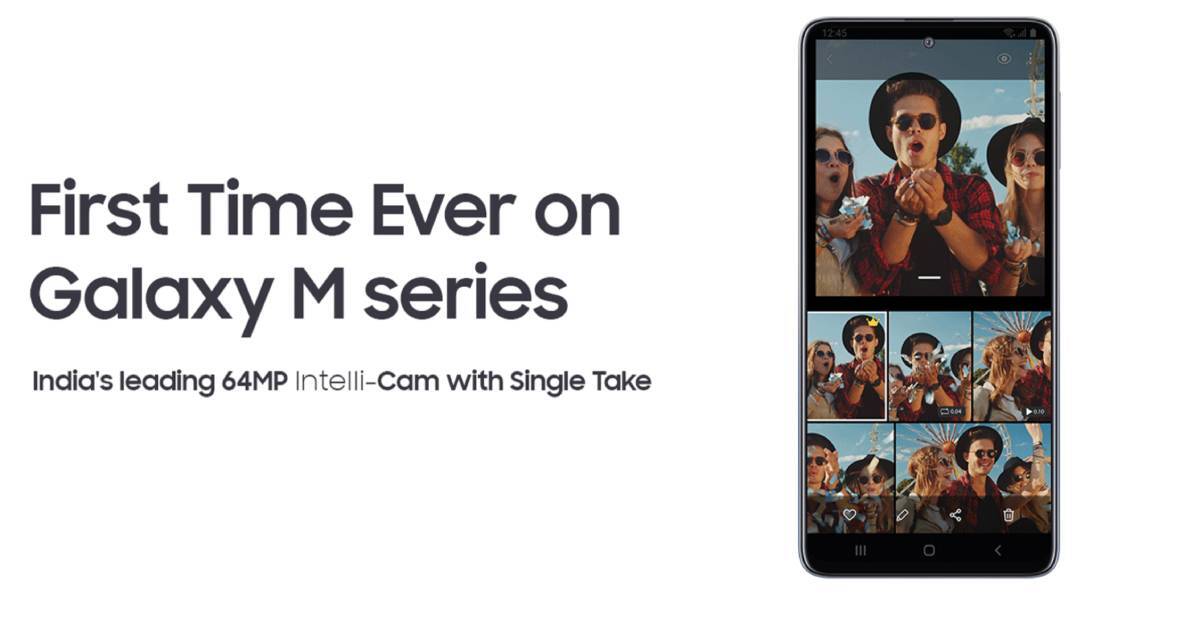 It’s hard to imagine so many camera features couldn’t imagine the kind of features that this 64MP Intelli-Cam has been equipped with. It’s capable of Night Hyperlapses, while it also allows you to seamlessly switch between the front and rear camera while the video is still being captured so you can not only capture the scene but also your reaction to it! The phone is also capable of automatically switching to the ultra-wide-angle camera if you’re trying to take a group selfie using the rear camera. You can also create custom filters from some of your favourite photos and use them on images you click! All these intelligent features make this 64MP camera an excellent companion to have. 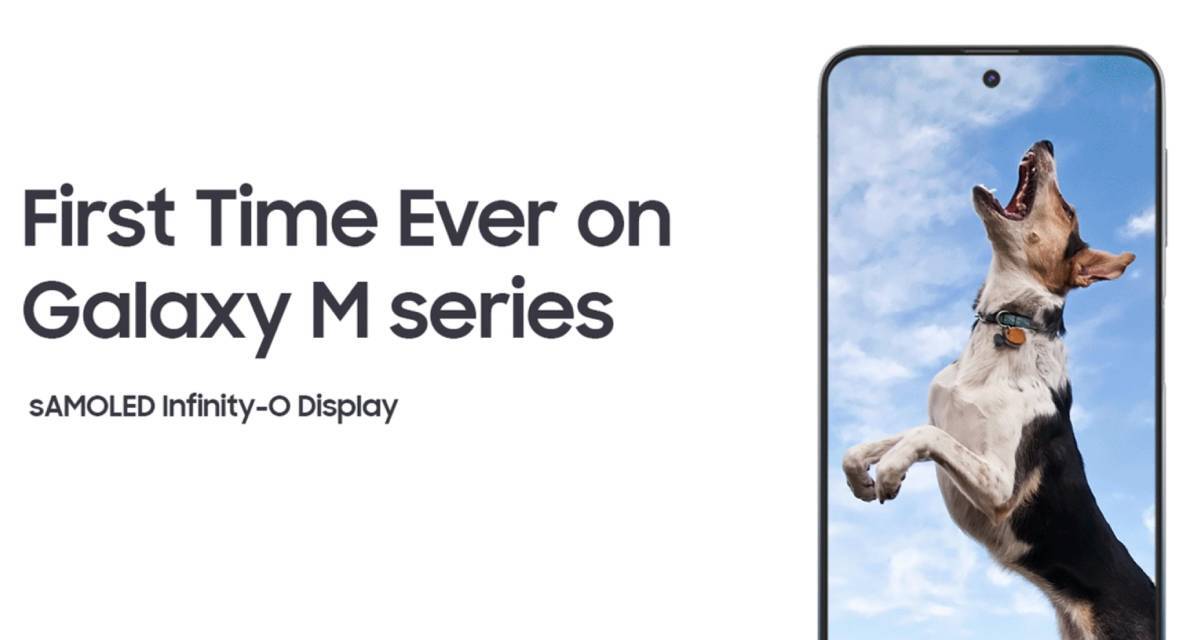 The Infinity-O display has always been the domain of high-end Galaxy phones, but its arrival on the M series signals that Samsung isn’t holding back when it comes to specs. The Galaxy M31s boasts of a 6.5-inch sAMOLED screen with a peak brightness setting of 420 nits. This FHD+ panel, moreover, is spread across the entirety of the front surface, giving the phone a truly gorgeous appearance. Its astonishing 91 percent screen-to-body ratio is made possible by the Infinity-O hole-punch that discreetly sits at the top and maximises the display area while keeping the body as compact as possible.

Inside this Samsung device is a 6000mAh battery that provides it with ample juice to keep going for two days with moderate usage. In fact, the phone offers up to 27 hours of video playtime and up to 51 hours of talk-time. And even when it does run out of juice, you can charge it swiftly thanks to its 25W fast charging support. The 25W fast charger that ships in the box is capable of charging this phone’s massive battery from 0 to 100 percent in just 97 minutes. And then there’s the Reverse Charging support that allows you to charge another device using this phone, with the help of the Type C to Type C cable that’s provided in the box.

Other exciting features of the #MonsterShot phone 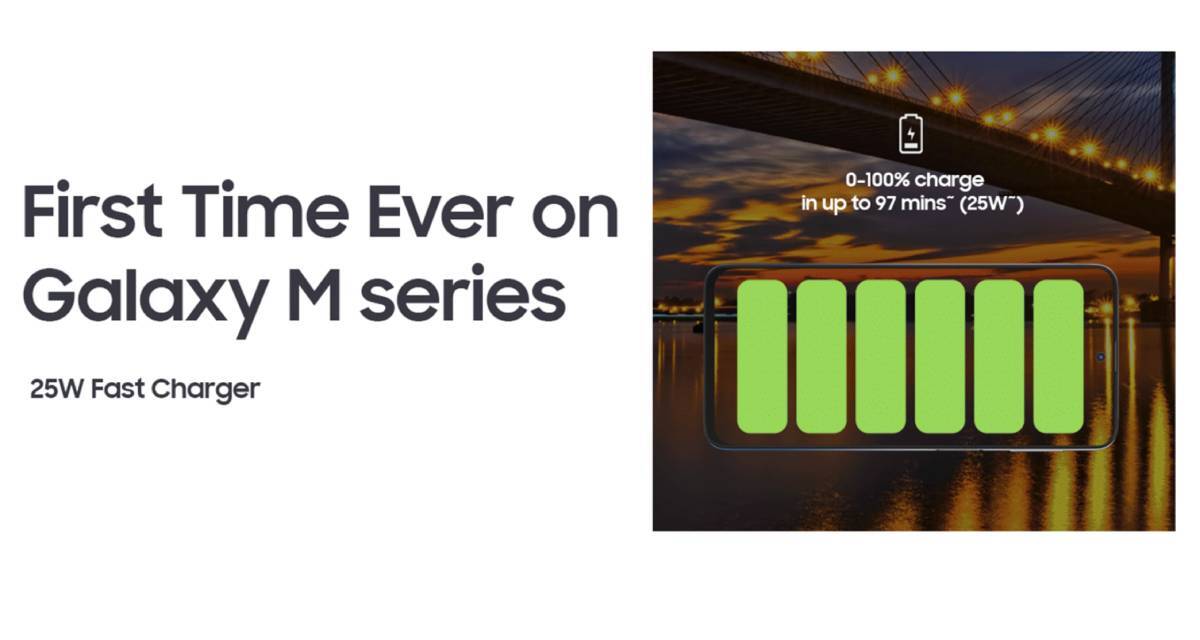 The #MonsterShot Samsung Galaxy M31s has been granted plenty of other features that are worth mentioning. It possesses the ability to shoot 4K videos with both its front and rear cameras, while the rear camera can even deliver Super Slo-Mo clips at 480fps. A unique feature that has been introduced by Samsung with this phone is Filters, which allows you to imitate the look on your favourite photographs and store those settings as filters. A total of 99 custom filters can be created and stored, to be used on images later on.

The Galaxy M31s is powered by the 2.3GHz octa-core Exynos 9611 processor that’s assisted by up to 8GB of RAM. As much as 128GB worth of storage is on offer, along with a microSD card slot that supports 512GB of additional storage. Another highlight is that it’s powered by Samsung’s One UI software, which is both feature-rich and a joy to use. The device is available on both Amazon.in and Samsung’s official website. The Samsung Galaxy M31s price for the variant with 6GB of RAM and 128GB of storage is Rs 19,499, whereas the 8GB RAM variant, which too comes with 128GB of storage, will cost Rs 21,499. Affordable, feature-rich, and stylish – Samsung Galaxy M31s is the complete package!