The smartwatch is a divisive gadget, in that there is no overwhelming need for it in your life, but once you use it you can’t imagine a life without one. From a device that merely mirrored notifications from a paired smartphone, smartwatches have now evolved into all-in-one gadgets that can track your fitness and health, play music, handle calling and messaging needs without using your phone and more. However, we are still some time away from smartwatches becoming a must-have, like your smartphone. 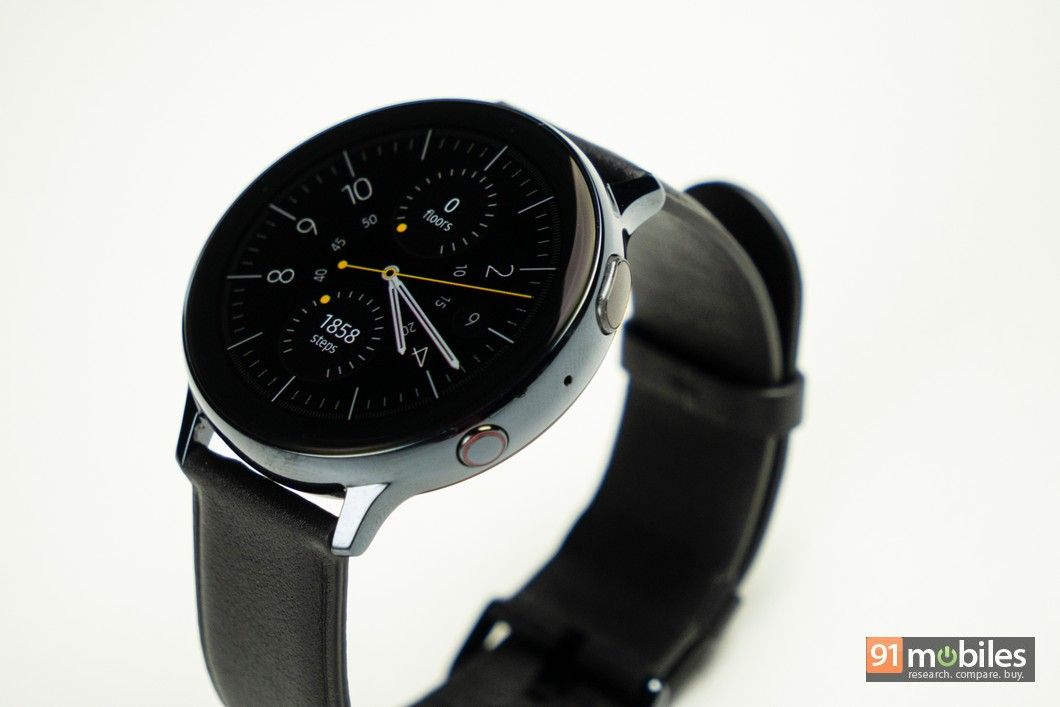 From an India perspective, it is Samsung which currently has the most number of smartwatches available, in the form of the Galaxy Watch series. Early in 2019, the company had announced the Galaxy Watch Active (review) in India, which was focused more prominently on fitness tracking and health than the original Galaxy Watch. Now we have a sequel to the device with basically the same design, a bunch of new nifty features and a price tag that is nearly double at Rs 35,990 (for the LTE version). Is this new upgrade worth it? Read on to find out.

Why pay in full when you get EMIs with 0% interest?
Buy the Samsung Galaxy Watch Active 2 now and pay later in flexible EMIs!
Know More 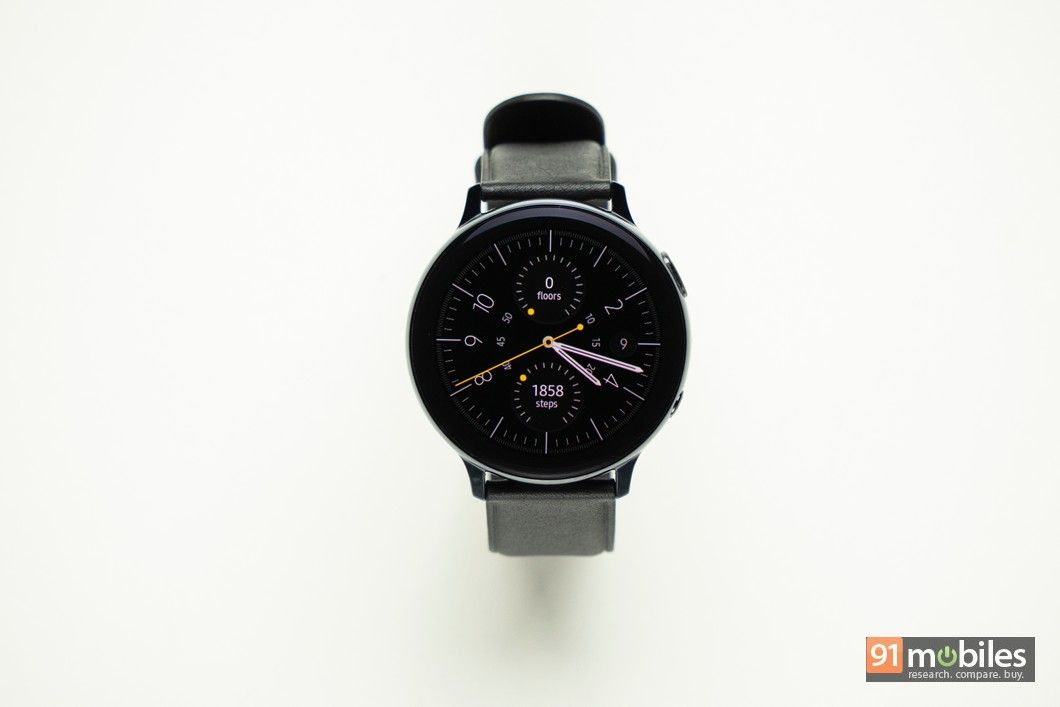 Samsung has made no visible change as far as the design is considered in the Watch Active 2 when compared to the previous-gen. In fact, the smartwatch is available (in India) in only the 44mm size instead of the 40mm size that was earlier available. I think 44mm is the perfect size for most, unless you’ve unusually small hands. As far as colour options go, the watch is available in silver, black and gold variants for the steel version while the aluminum version of the watch comes in black, crown silver and pink. The Watch Active 2 is also quite light on my wrist as well at 30g (without the strap) making it an easy companion for workouts. The frame of the watch is available with the steel dial akin to the original Galaxy Watch Active although the aluminum one is also available for purchase at a lower price. The leather strap provided in the box is not exactly to my liking but Samsung has plenty of other straps it offers on its website. 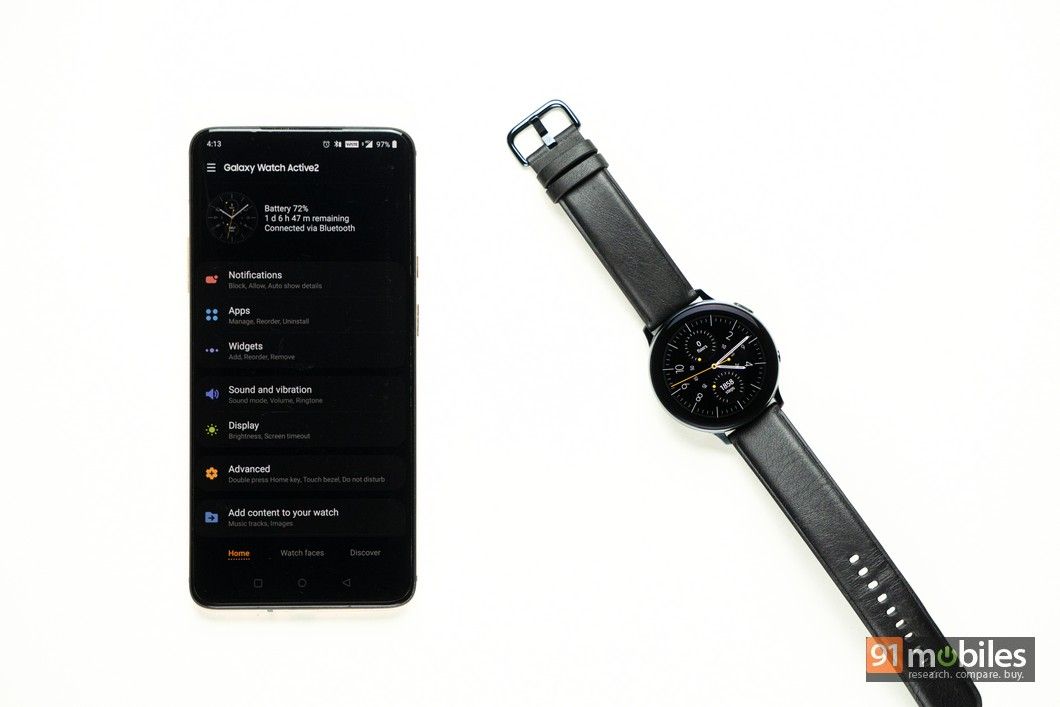 We get a 1.4-inch Super AMOLED display on watch with a resolution of 360 x 360. As is usually the case with Samsung devices, the Watch Active 2 offers a splendid and bright display while the screen real estate is just enough to view all the essential information without cluttering up the UI too much. The two physical buttons on the side of the watch have been carried over from the previous gen model, wherein bottom one brings the user back from the previous screen and the top button takes you directly to the home screen. Samsung has dispensed off with its signature rotating bezel for the Active series, although it has employed something quite close with the digital dial. The bezel surrounding the screen is touch-sensitive and you can switch between widgets simply by swiping on it. While it doesn’t have the very satisfying click that the standard Galaxy Watch has, the haptics on the bezel simulates a physical click to my liking. However, if that is not to your taste, the response and fluidity of the touchscreen are excellent enough for all your navigation needs on the device. 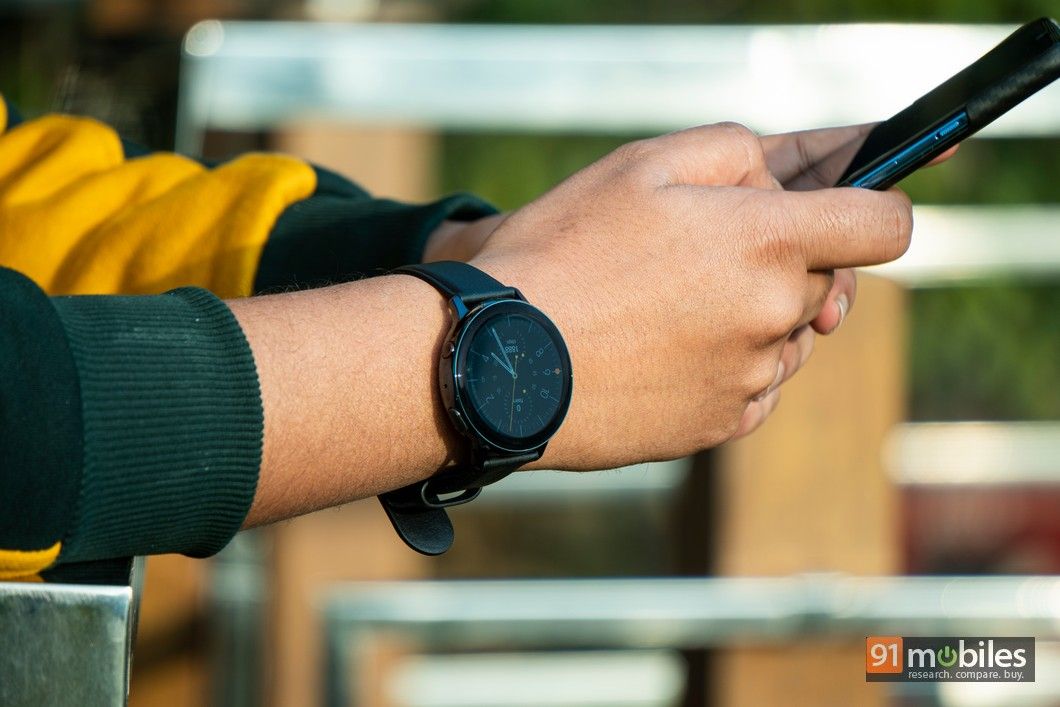 The South Korean giant is definitely charging a fair bit of money and for that price, you should expect a bevy of features on your smartwatch. Samsung builds on the work it had put in the Galaxy Watch Active and throws in some new features to make it even more compelling than the Apple Watch Series 5 (review). As a fitness tracker, I believe the Watch Active 2 has no rival. There’s the usual stuff such as automatic detection of seven exercises along with tracking of additional fitness activities. The Running coach function will keep giving you useful advice during your workout. The Watch Active 2 also gives you more accurate heart rate detection. Oh, and taking a page out of Series 5’s book, the Watch Active 2 even has an always-on display. 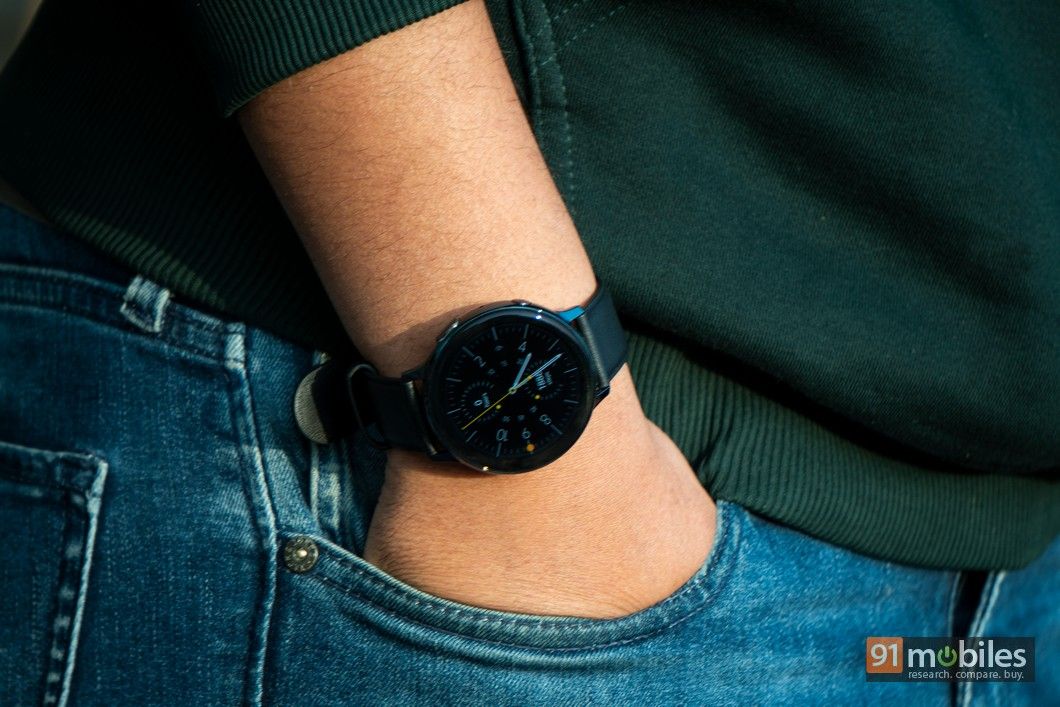 The model that I have for review is the LTE version of the Galaxy Watch Active 2 which means that I can quite literally operate the watch to make calls without my phone near me. I would, however, stick with the Wi-Fi only version since most of the time you are bound to carry your phone with you anyway. Plus LTE also drains the battery of the watch quite rapidly. For the sake of it there is also a browser on the watch but good luck trying to navigate through it on the tiny screen. The usual functionalities of placing and receiving calls and replying to WhatsApp messages are present. The watch is IP68 water-resistant and can survive a pressure of up to 5 ATM for 30 minutes. There is also GPS integration inside the watch which will help you track the distance you have run. 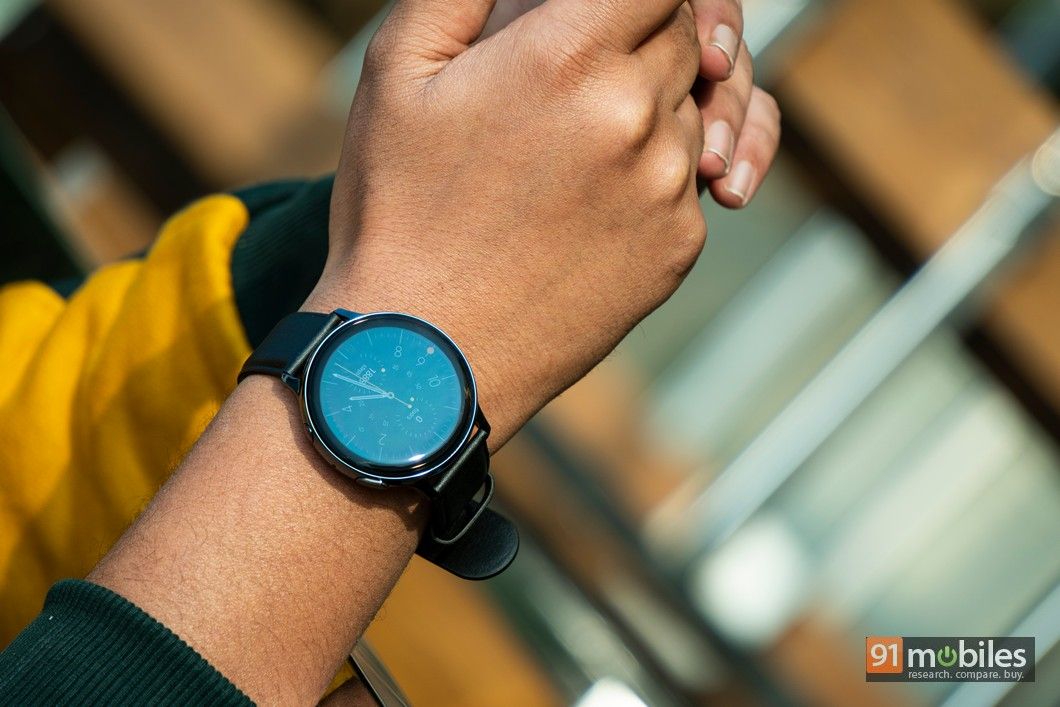 The Watch Active 2 has support for third-party apps but it is quite limited. For example, I love that there is a Spotify app that lets me play music directly from the watch and the interface is quite intuitive and well designed for the watch. However, there are no mapping or directions apps available. The Twitter app is extremely glitchy and asks for a login every time your smartwatch is locked. What will definitely keep you hooked are a seemingly infinite amount of watch faces that you can find on the Galaxy Store. The problem is that list of faces is not exactly curated so you’ll basically keep on endlessly scrolling until you find something to your fancy. A plus point that the Galaxy Watch Active 2 has over the Apple Watch Series 5 is the built-in sleep tracking features that monitor your sleeping patterns. 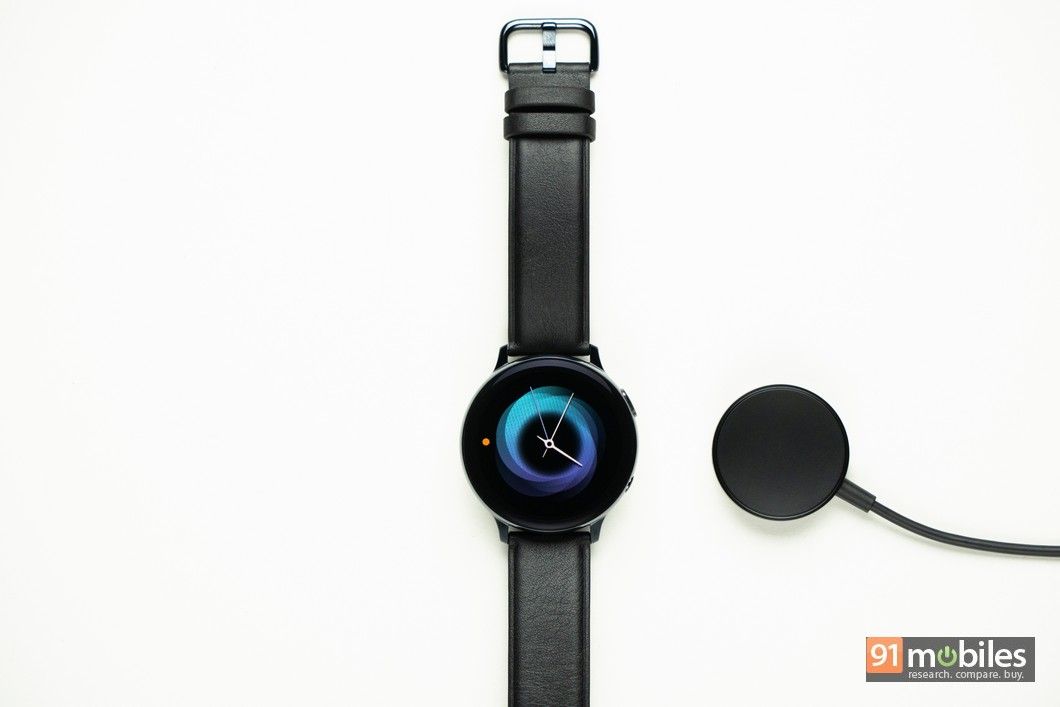 The Watch Active 2 runs Samsung’s custom UI called TizenOS which, in my humble opinion, is much more optimised that Google’s WearOS that I’ve used on the Fossil smartwatch. As with all other Galaxy Watches, Active 2 also employs a system of displaying customisable widgets such as heart rate, weather, calendar, apps, exercises and more which can be accessed by swiping left from the home screen or the bezel. A right swipe will take you to your notifications while a swipe down will clear them all. It’s intuitive and simple at the same time and is perhaps a big contributor as to why Galaxy Watches are the best selling smartwatches for Android. 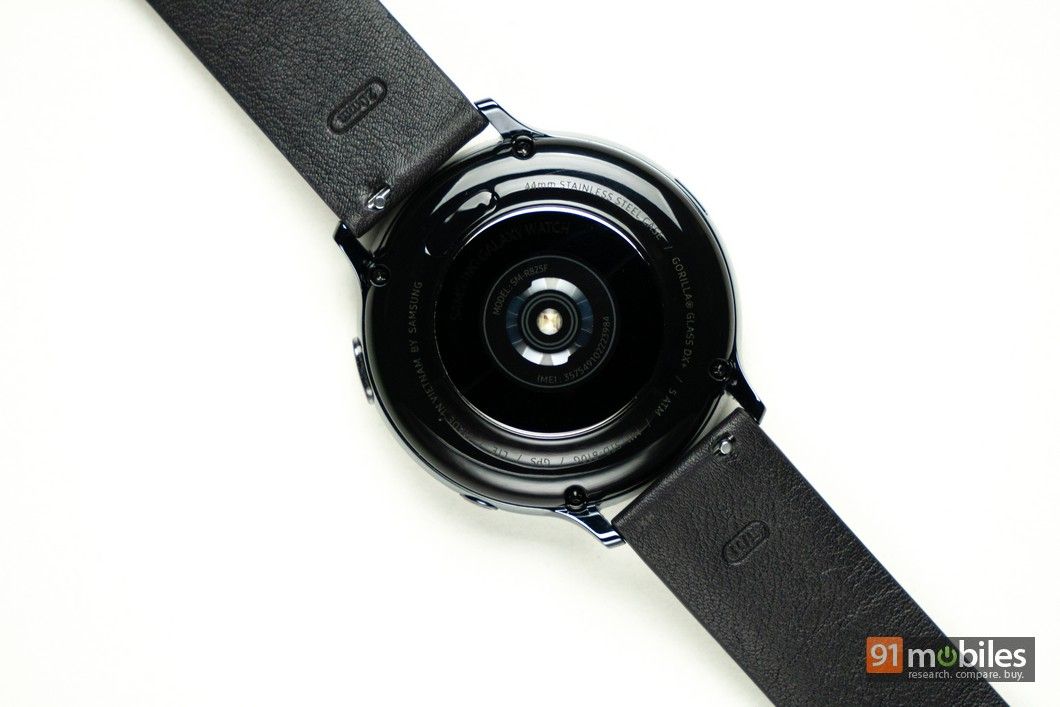 While the Watch Active 2 is not at the level of smoothness as the Apple Watch Series 5, the watch has left me impressed nonetheless. Powered by the Exynos 9110 dual-core chipset and 1.5GB of RAM (for the LTE model), the Watch Active 2 makes the entire experience of switching apps and checking widgets extremely fluid. There is 4GB of storage on the device and after the software and RAM requirements are met, you are effectively left with only 1.5GB of storage to use.

As far as battery goes, the Watch Active 2 houses a decent 340mAh cell which has lasted me about two days on full charge when Wi-Fi and Cellular are both off. Samsung also intelligently provides for battery management on the watch with a battery-saving setting that turns on greyscale and switches off Wi-Fi/LTE. There’s also a watch mode which is said to last 25 days on a full charge as it will just show you the time and nothing else.

As far as a smartwatch goes, the Galaxy Watch Active 2 has it all. It has great fitness and health tracking, ease of access, decent third-party apps support, infinite watch faces to choose from, a fluid and intuitive interface and most importantly it is easy on your wrist. The only thing which holds back the Watch Active 2 is its price tag of Rs 35,990. However, if you opt for the less expensive Wi-Fi only version with the aluminum dial the device it will set you back Rs 25,990 which seems like a very good deal considering the competition. 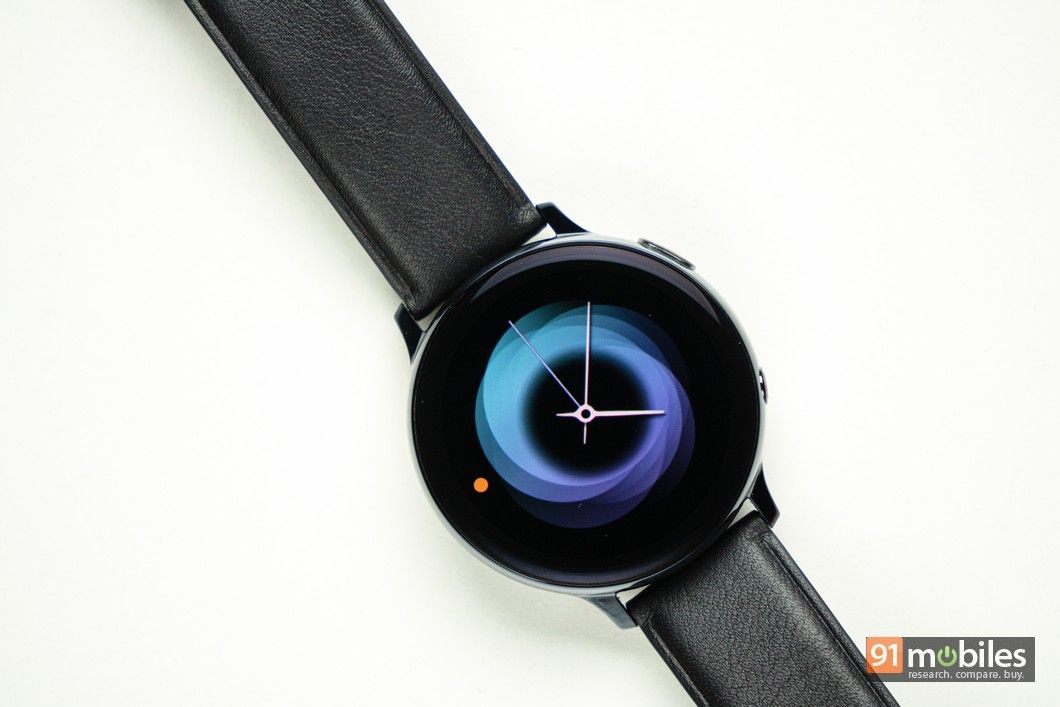 For iPhone users, the choice is clearly an Apple Watch Series 5 or even the Series 3 thanks to Apple’s solid integration between devices in the ecosystem. For Android users though, the Galaxy Watch Active 2 is a solid alternative but not before you take a closer look at the Fitbit Versa 2 (review) and the previous gen Galaxy Watch Active.