Budget Smart TVs have come a long way, and nowadays, you can get your hands on a capable smart TV which sports a good panel without burning a hole in your wallet. That said, not all smart TVs are truly ‘smart’ and many offerings in the budget space are plagued by unintuitive software which mar the experience of using the TV. However, Xiaomi’s latest entrant in the TV space could be a sign of changing times, as the company recently launched a 49-inch smart TV which comes with support for Google’s Android TV platform. Dubbed the Mi TV 4A Pro (first impressions), the TV reached our office a while back and in this review, let’s see if it’s all hype or a new hope.

Unlike the pricier Mi TV 4, the Xiaomi Mi TV 4A opts for a utilitarian design and has been constructed entirely using plastic. What’s more, the unit has a noticeable girth too, and the TV’s display isn’t void of bezels either. However, seeing how buyers will view their content from at least a few feet away, the device’s thick chassis should not come across as a deal-breaker for anyone. Moreover, upon closer inspection, I noticed that the company has employed high-quality plastic to construct the TV’s chassis, which adds to the robustness of the unit’s body. 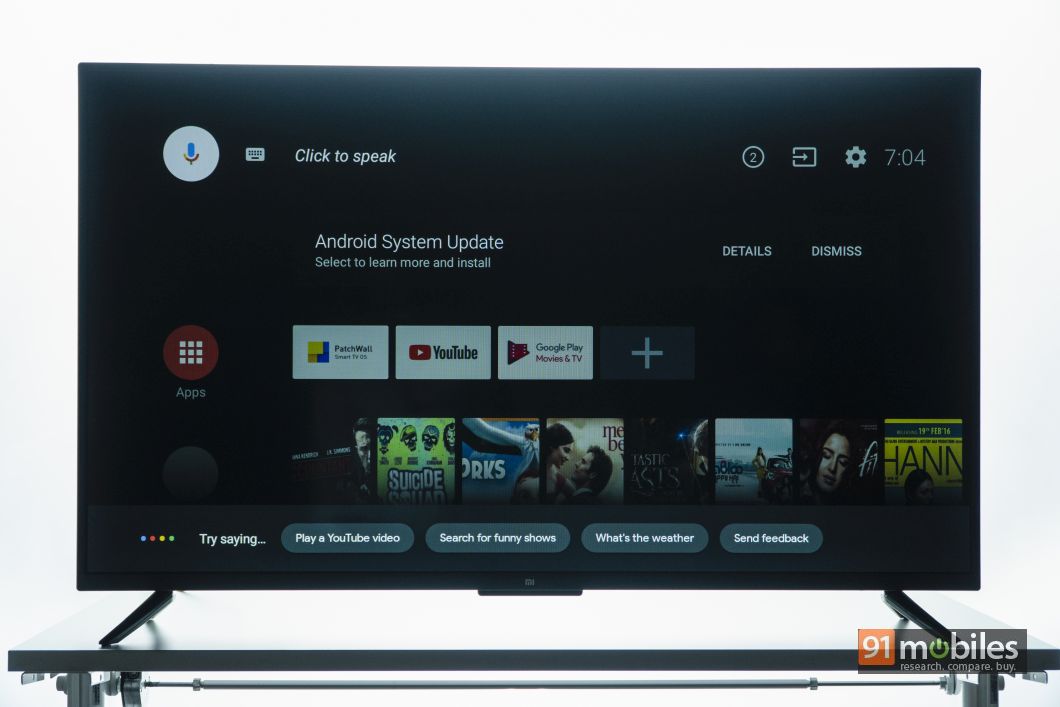 A fringe benefit of using plastic to construct the TV is that it helps keep the weight of the unit down. At ten kilos, the Mi TV 4A is relatively light and therefore, you shouldn’t face any problem transporting the unit from one room to the other. Unfortunately, if you’re not going to mount the TV to a wall, I’ll recommend you don’t toy with the TV’s positioning all that much as the bundled plastic feet feel flimsy and cheap.

If you’re curious as to where the company has positioned the buttons, allow me to clear the air. The Xiaomi Mi TV 4A comes with just a single button which is used to turn the unit on or off which has been cleverly hidden at the bottom, underneath the ‘Mi’ branding. Therefore, you will have to pay close attention to where you keep the remote. 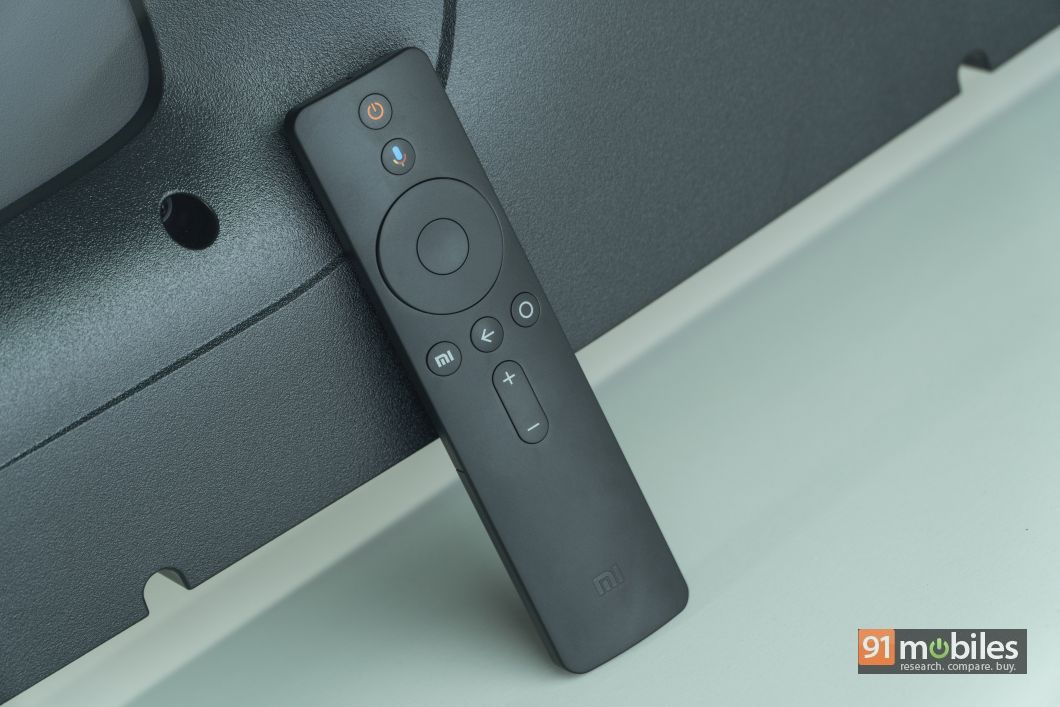 The remote on the Xiaomi Mi TV 4A follows in the footsteps of its predecessors, and comes sporting a minimalistic design. However, this time around, you’ll find two new buttons on the remote, one of which brings up the brand’s proprietary PatchWall OS, whereas the other switches the interface to Google’s Android TV platform. As for the rest of the buttons, you’ll find a power button, a volume rocker as well as a button to invoke the Google Assistant for voice-based commands. Interestingly enough, unlike the Mi TV 4A 43, the Mi TV 4A Pro 49’s remote connects to the TV via Bluetooth and therefore, you don’t need a clear line of sight to operate the TV with the remote.

For ports, the Xiaomi Mi TV 4A Pro ships with a plethora of connectivity options, including two USB 2.0 ports and three HDMI ports, one of which supports ARC technology. Therefore, if you plan on connecting the TV to a soundbar, then you’ll have one less cable to worry about. The unit also ships with an S/PDIF out port, an Ethernet interface as well as an AV port.

All said and done, the Xiaomi Mi TV 4A has a subtle design which might not raise many eyeballs, but it will certainly look gorgeous mounted on a wall.

As its moniker suggests, the Xiaomi Mi TV 4A Pro 49 sports a 49-inch full HD IPS LED panel. The display ships with a refresh rate of 60Hz and boasts a response time of just 6.5ms, ensuring that you will be able to enjoy action-packed games without any input latency or delays. What’s more, the panel can play HDR content too, however, there’s a catch. The display makes use of 8-bit HDR technology and therefore, you will not have access to the entire 10-bit colour gamut. That said, you will be able to enjoy deep blacks, thanks to the display’s boosted contrast levels. 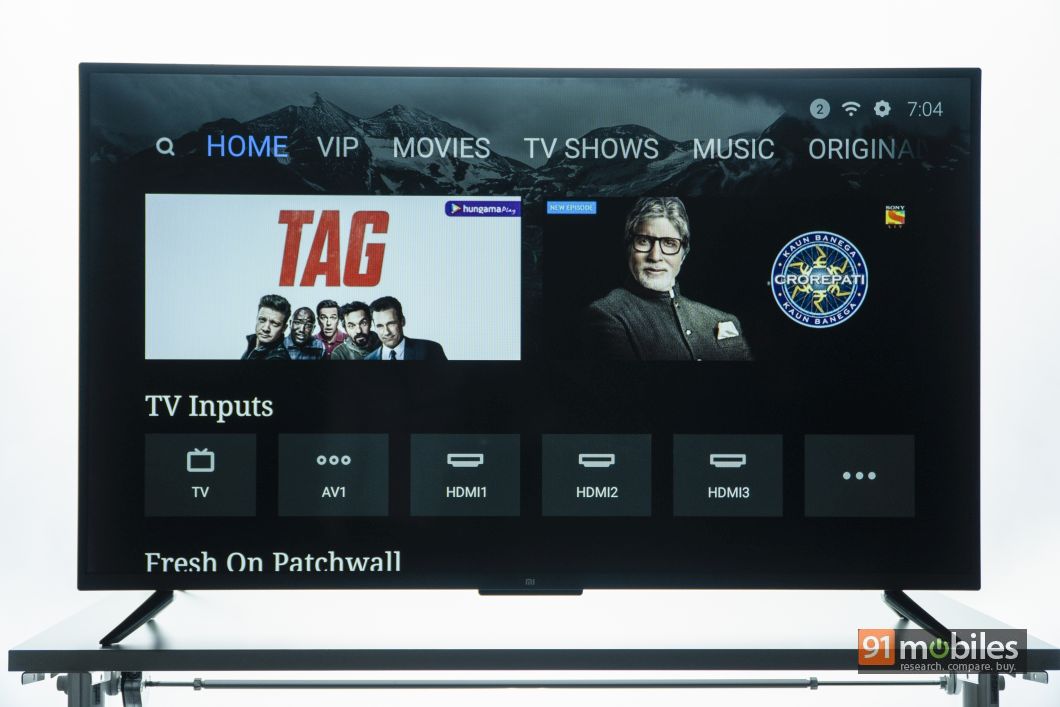 As for the quality of the panel, standard 1080p content streamed from YouTube looks pleasing to the eyes. The colours appear vibrant and the viewing angles are excellent too. Moreover, the display gets sufficiently bright and since the panel ships with an anti-reflective coating, glares and unwarranted reflections are kept to a minimum. 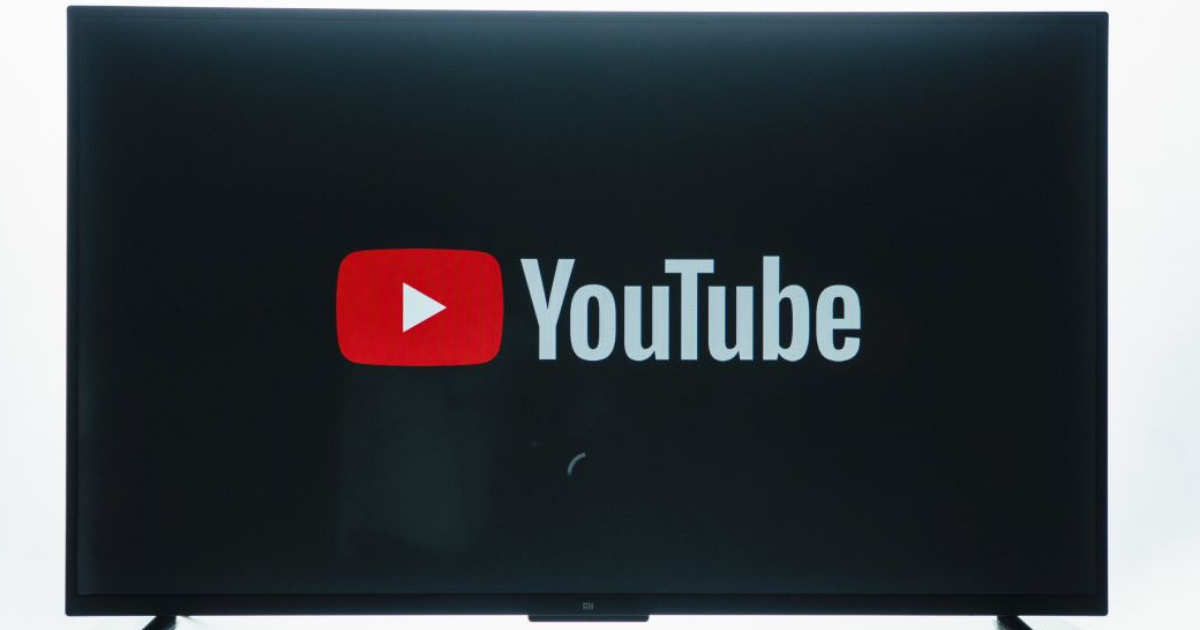 With that said, the display’s ability to output HDR content leaves something to be desired. Since the panel doesn’t make use of the entire colour gamut of the RGB spectrum, there’s a noticeable loss in details. Moreover, the blacks appeared a bit too dark for my liking and therefore, the entire scene felt dimmer than it otherwise should be. In a nutshell, I’ll recommend you use the TV to watch standard definition content to enjoy the quality of the panel to the fullest.

The USP of Xiaomi’s latest smart TV is that the device comes with support for Google’s Android TV platform. That being said, the company hasn’t shelved its proprietary PatchWall OS, and the software works in conjunction with Google’s platform. Consequently, users will have access to a massive library of TV shows and movies thanks to PatchWall’s partnership with services like Hotstar, Sony Liv and Voot. At the same time, buyers will be able to access and download a myriad of applications from the Google Play store which are scaled to work properly with the unit’s 49-inch display.

What’s more, switching between the two interfaces is as simple as clicking a button (quite literally). The bundled remote comes with two buttons flanked on either side of the back button, one of which will take you to the Google’s interface whereas the other will bring up PatchWall.

Now, let me assure you that using the TV doesn’t require a steep learning curve as the software is quite intuitive and user-friendly. Think of it this way – Google’s Android TV platform is your gateway to online services like YouTube, whereas Xiaomi’s PatchWall OS tightly integrates with your set-up box and DTH services while bringing some online features at the same time. On a side note, services like Netflix and Amazon Prime are yet to make their way to Xiaomi’s offering, however, we’ve been told that the latter might make an appearance by the end of the year. 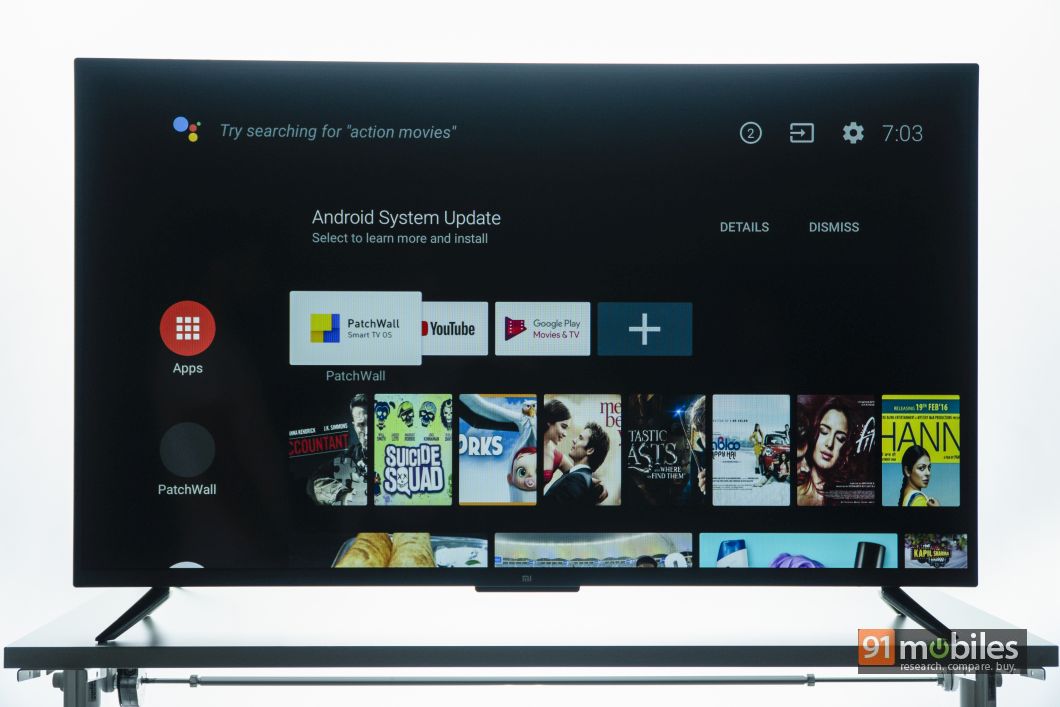 From Google’s Android TV Platform, you can run and download various applications as you deem fit. On Android TV, you’ll also get the option to create your own channels for apps that you use the most. For instance, my channels included YouTube, Google Play Music and MX Player, which allowed me to play movies stored on the TV’s internal memory. You can also create a channel for PatchWall OS, which will update you with the latest movies and TV shows on its various partner apps like Hungama and Voot.

Once you switch to PatchWall’s interface, you will be able to browse through a plethora of movies, TV shows and music by simply scrolling left or right. Once you land on a category you like, say movies, simply scroll down to glance at what movies are trending currently. What’s more, if you want to search for a specific movie, then you can simply toggle the Google Assistant and speak the movie’s title into the remote’s microphone. Provided the movie is available on Xiaomi’s partner services like Voot, Hungama Play and Sony Liv, the TV will automatically bring up a relevant result and play the movie. 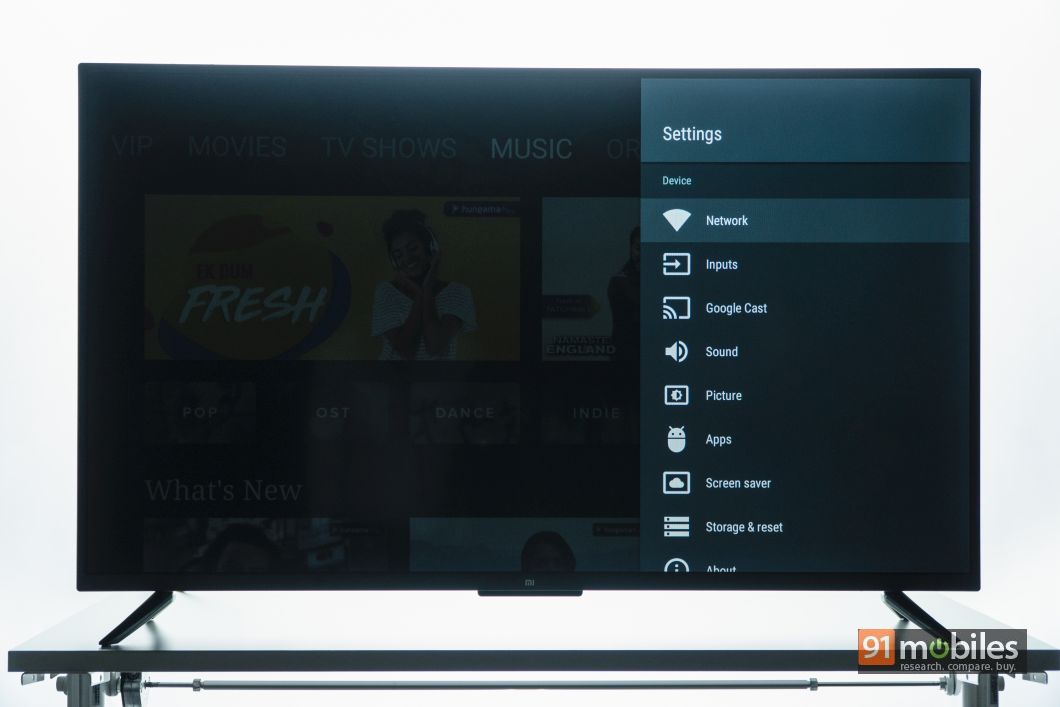 That being said, the voice based search is not without its faults and you’ll have to be extremely specific with your queries. Moreover, the TV doesn’t bring up relevant information from installed applications. For instance, when I tried searching for Game of Thrones season one (which is a Hotstar exclusive), the TV was unable to pull up results from the app.

While all that’s good and dandy, the star of the show is how the TV integrates DTH services from your setup box directly into its interface. You see, once you’ve hooked the TV to your setup box, you can head over to the TV guide app which will present you with content cards for various shows being telecasted at that moment. You’ll also be able to make out how much time has lapsed for each show by glancing at the progress bar below each content card. 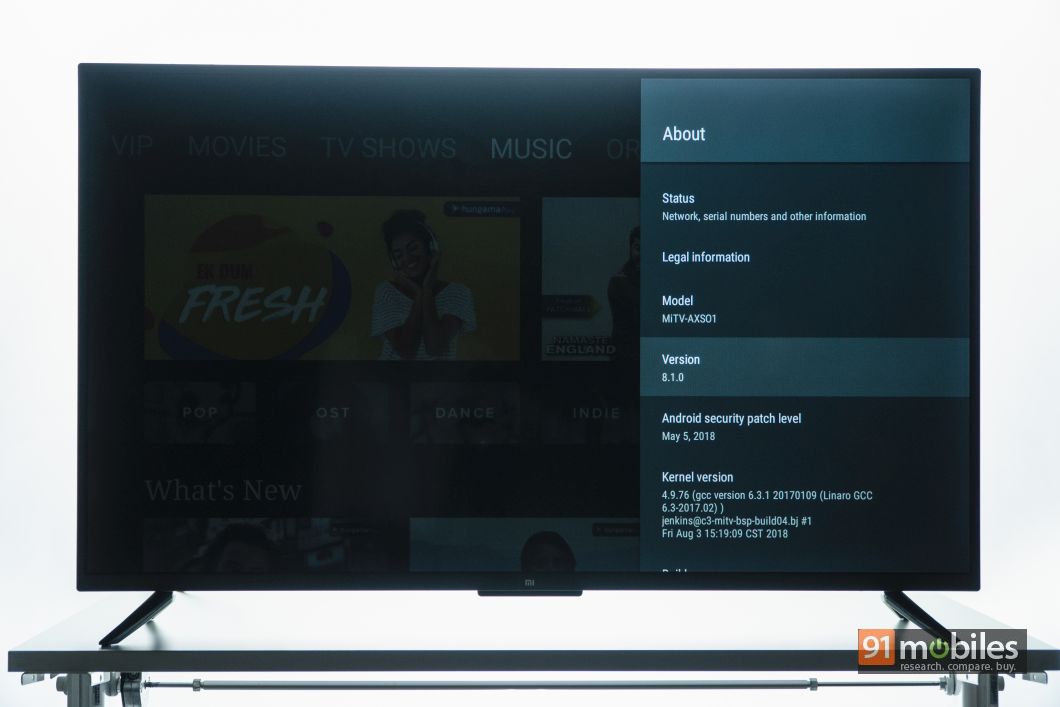 As an example, say you come across a content card for a football match being telecasted on Ten HD. Now, if that piques your interest, you can simply click on the content card and the TV will automatically take you to the Ten HD channel on your set-top box. The beauty of getting in line with this system is that you won’t have to remember the numbers for various channels anymore. Moreover, you can even purchase a Xiaomi IR cable which retails separately for Rs 199, connect it to your TV and place the transmitters in front of your set-top box, and then use the Mi TV 4A Pro’s remote to control the latter.

Powering the smarts on the Xiaomi Mi TV 4A Pro is a 64-bit quad-core Amlogic Cortex-A53 processor which works alongside a Mali-450MP3 GPU. For RAM and storage, the TV ships with 2GB memory and 8GB of eMMC storage. While these specifications pale in comparison to most budget smartphones these days, they are more than capable of running the Xiaomi Mi TV 4A Pro smoothly. During my stint with the unit, I didn’t come across any instances of lags or stutters whilst navigating through the UI or opening apps. I didn’t run any games from the Play Store though, because quite frankly, I had my PS4 hooked to the unit.

As for the audio quality, the Mi TV 4A Pro ships with two 10W speakers which get plenty loud. Unfortunately, increasing the volume distorts the audio coming out of the TV. To Xiaomi’s credit, I doubt anyone will watch content at 100 percent volume levels in the first place.

Much like the company’s smartphones, the Xiaomi Mi LED 4A Pro too offers excellent value for money. While the unit’s HDR capabilities leave something to be desired, on the whole, the smart TV brings forth a compelling package. Therefore, for its asking price of Rs 31,999, the Mi LED 4A Pro gets two thumbs up from me.