It’s the 44th minute. Marcus Rashford dribbles the ball away from Vertonghen and drills it past the keeper towards the far corner. The crowd lights up, chanting – ‘’Ole’s at the wheel”, to praise the manager’s sixth consecutive win. 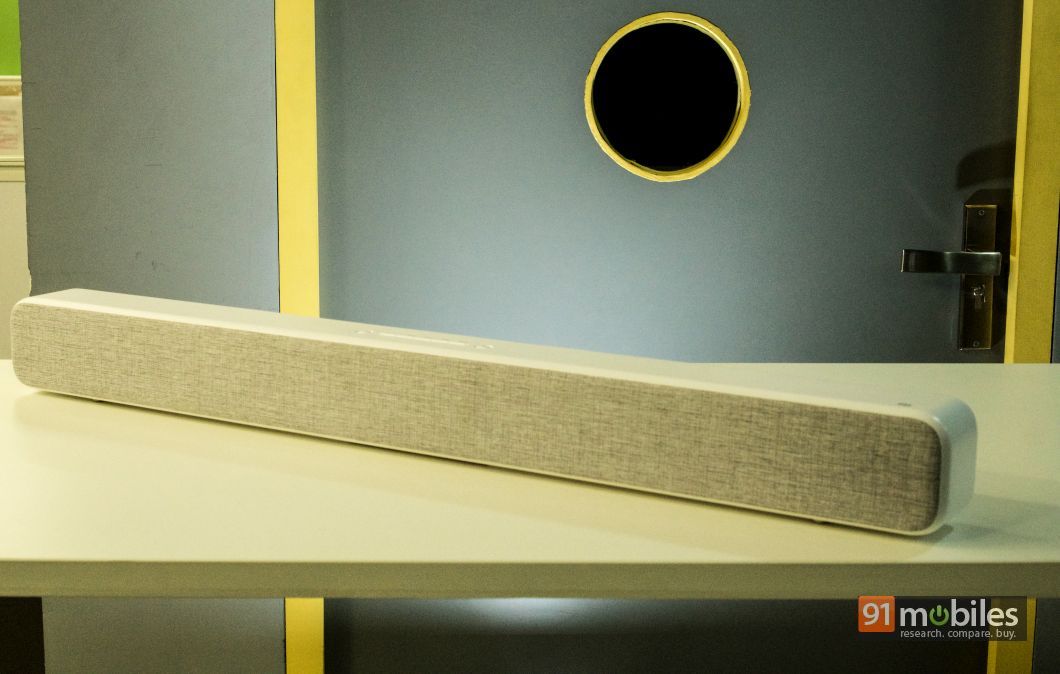 Although I was watching my team play from thousands of miles away, I genuinely felt as if I’d been transported to Wembley itself, thanks to the brilliant, cinematic audio offered by Xiaomi’s Mi Soundbar (first impressions). The brand recently announced the new device alongside its latest Smart TVs in the Indian sub-continent, and after using it for a few days, I am in awe of the product. So much so, I feel that this could be the company’s best device in all of 2019. Here’s why.

I’ve already talked about the design of the Mi Soundbar in my first impressions, but long story short – you won’t find a better-looking soundbar in India at this price range. The Xiaomi Mi Soundbar has been constructed using a mix of fabric and plastic, and the device comes coated in a white which simply put, looks beautiful and should blend in well with your furniture and TV set. Quite frankly, you’ll probably get more compliments on the design of the unit than its sound quality, which speaks volumes about the soundbar’s gorgeous aesthetics. What’s more, Xiaomi gives users the option to either place the soundbar on a flat surface, or mount it on a wall too, which is nice. 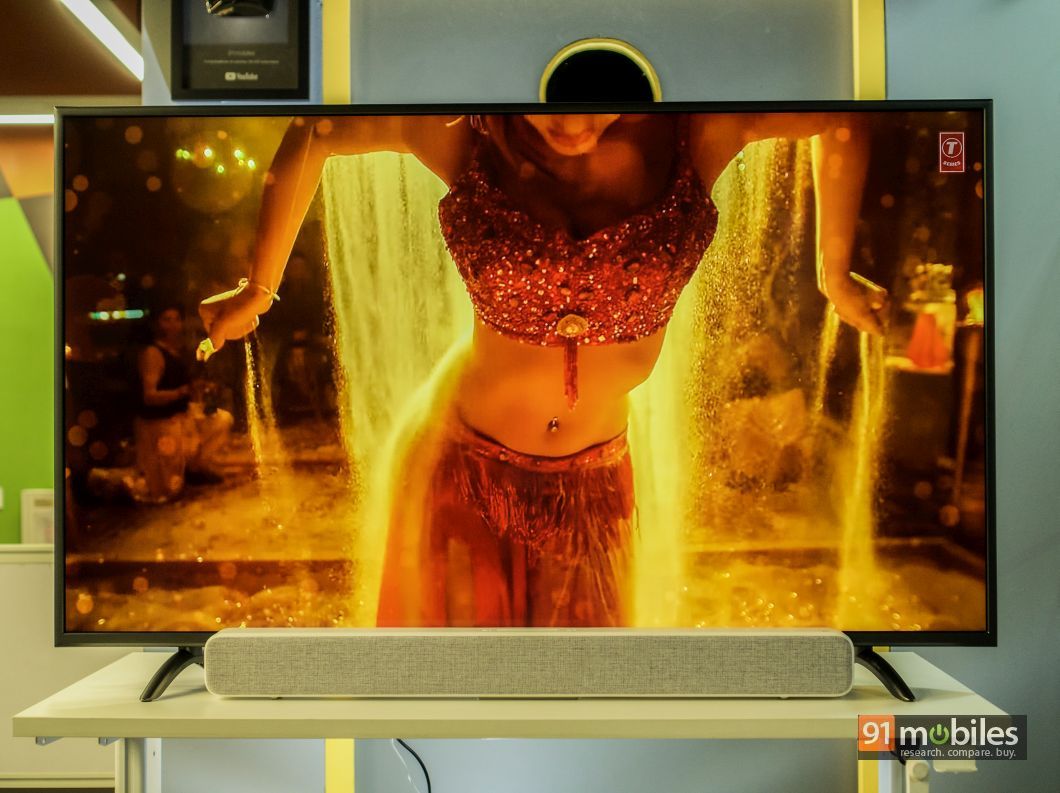 Coming to the connectivity, the Xiaomi Mi Soundbar ships with a slurry of ports which have been neatly positioned towards the back of the unit. If you have an older TV, then you can use the line-in connections to connect it to the soundbar. However, the soundbar also features an S/PDIF port as well as an optical connection for more recent TV models. 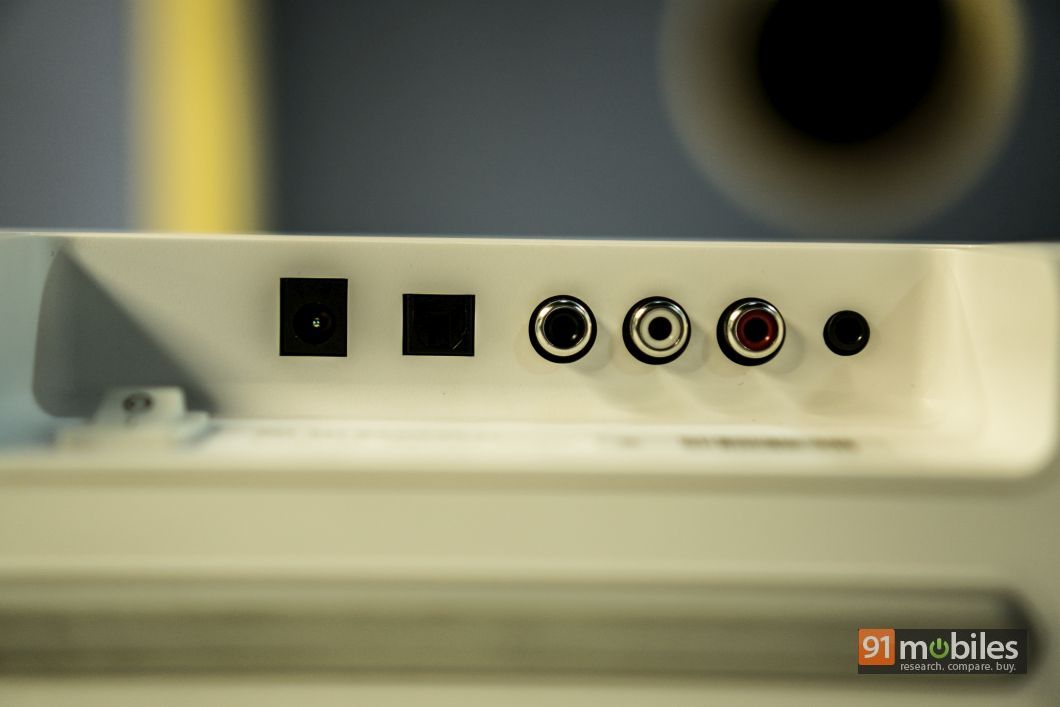 Unfortunately, there’s no HDMI input on the device and consequently, you’ll also miss out on ARC functionality. For the uninitiated, ARC stands for Audio Return Channel, and TVs and soundbars which support ARC can relay audio from multiple devices through a single HDMI cable. In layman terms, let’s say you’ve got two devices connected to your TV, one of them being a Sony PS4 Pro and the other an ARC-compatible soundbar. Then, you can route the in-game audio from your PS4 directly through your soundbar without having to connect the console to it with a separate cable. What’s more, you can even control the basic functions (such as increasing or decreasing the volume) of various devices by means of a single remote. 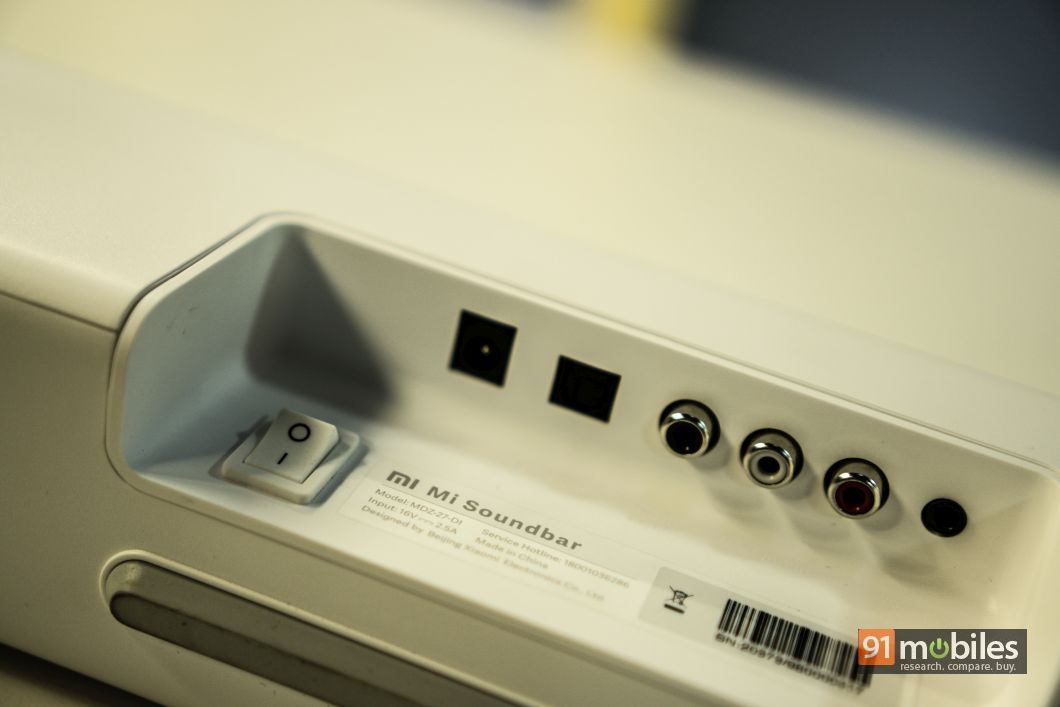 It’s quite evident that Xiaomi had to cut corners to bring the price of the Mi Soundbar down. Case in point, the Mi Soundbar doesn’t ship with a remote and therefore, you’ll have to leave the comfort of your couch to change the input mode or adjust the volume levels. Now, considering the soundbar’s extremely competitive price tag and the fact that it excels in almost every other department, I’m willing to let it slide. However, I would like the company to bundle a remote in its future offerings. I’d also like to point out that the Xiaomi Mi Soundbar features an AUX input and can even connect to compatible devices over Bluetooth. That said, you can only connect one device on any given instance to the soundbar over Bluetooth.

After reading my introduction, you’d be wise to assume that the Mi Soundbar delivers an excellent audio experience. But, before I talk more about the soundbar’s sound quality, let’s talk specs. 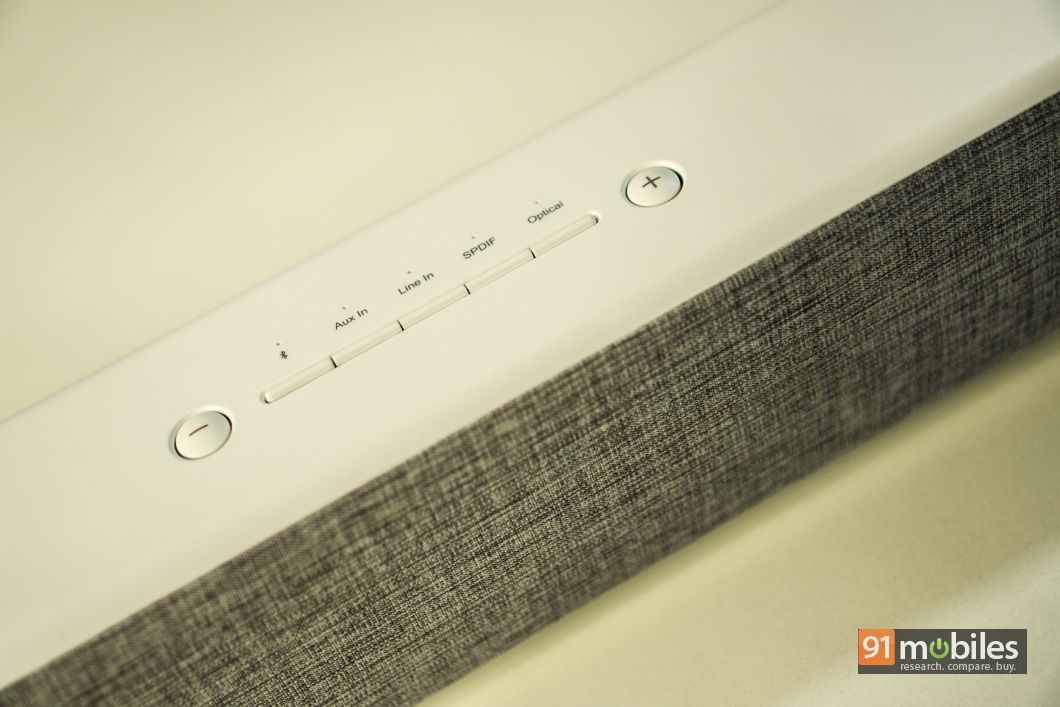 Underneath its plastic chassis, the Xiaomi Mi Soundbar features eight drivers, including two 20mm dome tweeters, two 2.5-inch woofers and four passive radiators which can operate across a frequency spectrum of 50Hz to 25,000Hz. The device is downright excellent for watching shows and sports, and therefore, fits the bill nicely if you want to enhance the audio experience you get from your TV. The soundbar comfortably fills a large room at just 60-70 percent volume and you’ll come across no noticeable distortion or static noise when listening to your favourite actors deliver their dialogues on screen. 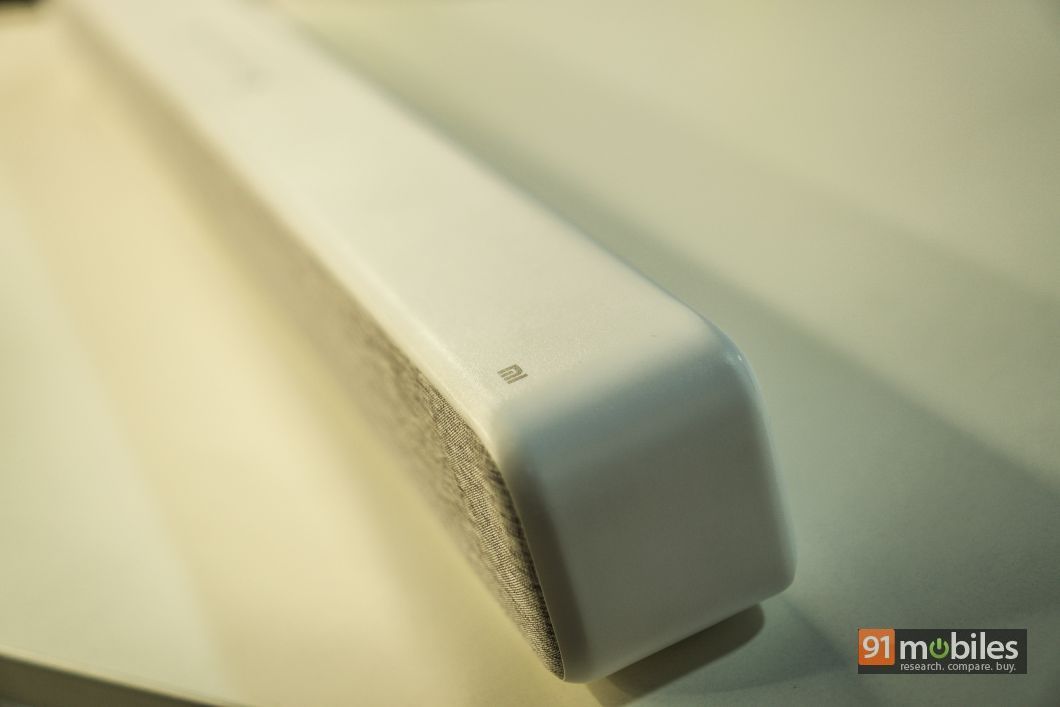 What’s more, the soundbar creates a spacious sound stage which will encapsulate everyone in the room. During my stint with the device, I noticed that I was getting the best experience when I was facing the Mi Soundbar, though my friends sitting towards my right seemed to enjoy the audio output just as much. 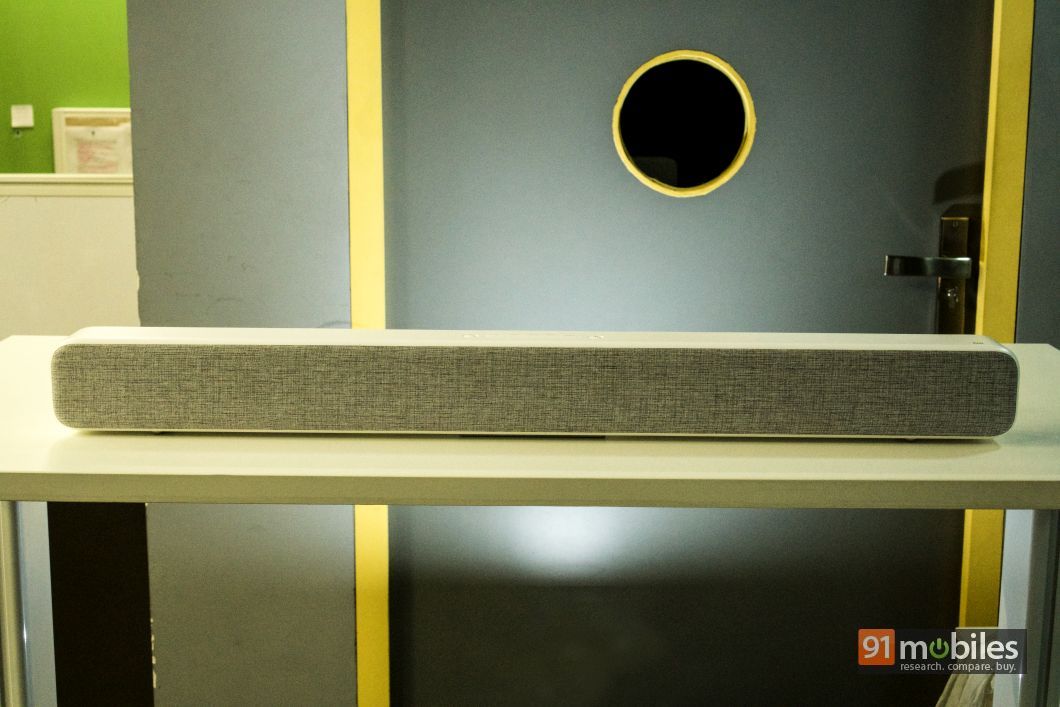 Let me now touch upon pure music quality. Despite not shipping with a dedicated sub, the Mi Soundbar does a fine job of playing songs from the EDM/Hip-hop genre. While the beats don’t rumble or roar, they are quite impactful and tight, which in all honesty is still better than what you’d get with competing budget soundbars. The mid-range is the device’s forte and you’ll enjoy listening to soothing blues on the soundbar. Unfortunately, the highs were rolled off and the soundbar suffers from poor imaging too. Consequently, songs from the rock genre sounded muddy and shrill, especially at high volumes. So while it may suffice for many, you should keep you expectations in check while using it for music.

For all its flaws, the unit delivers an immersive audio experience and is quite the looker too, which makes it an easy recommendation for anyone looking to up their audio game without shelling out tens of thousands of rupees.