“Our two cents on Amazfit’s latest smartwatch, the Pace”

Like some of you reading this review, I’ve been a smartwatch skeptic for a while now. I’ve spent some time with the Apple Watch Series 2, dabbled with Garmin’s ultra-expensive Fenix 5 and tried my hands with Huawei’s offerings as well. Yet, I’ve never pulled the trigger and bought a wearable for myself as the watches I like are either too expensive or barely last a day or two off a single charge. 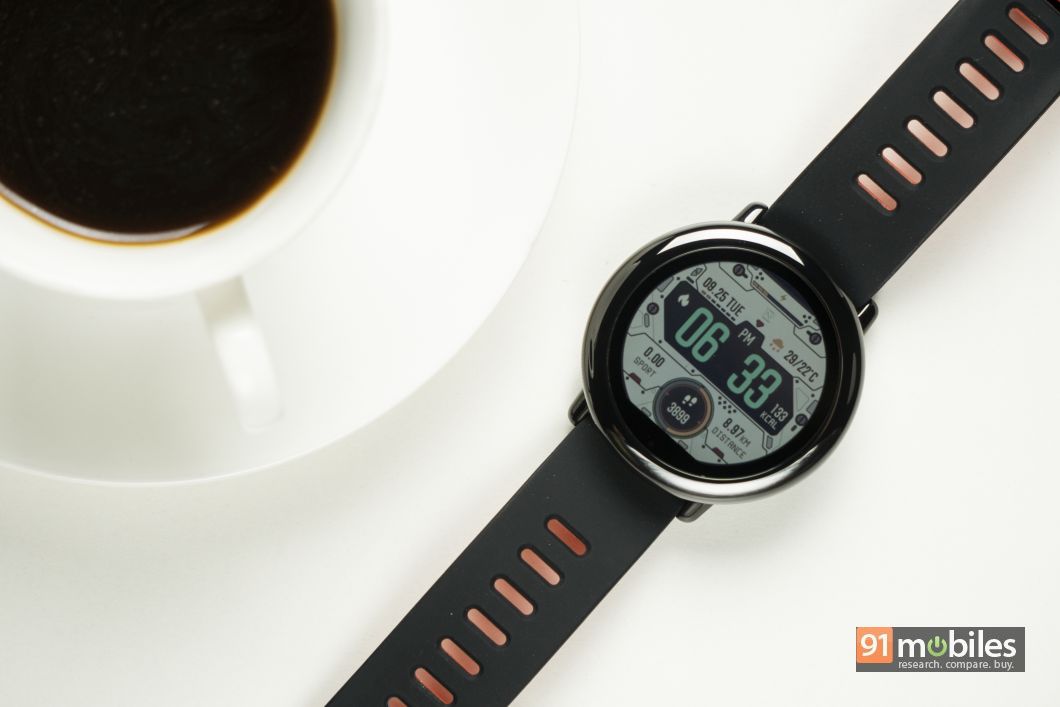 Well, all that changes with the Amazfit Pace, which was recently announced in the country alongside a bunch of other smart wearables. For the uninitiated, Amazfit’s parent company Huami is a subsidiary of Xiaomi and much like the brand’s smartphones, the Pace manages to strike the delicate balance between price and performance too. So much so, I feel the urge to buy one for myself. Wondering what makes the Amazfit Pace so special? Read on to find out.

Let me cut straight to the chase here – the Amazfit Pace is a beautiful timepiece which will get you in more conversations in the metro or at a party than any other wearable. What’s more, it’s only the second wearable after the Apple Watch which I could dress up or down, depending upon the occasion. You see, by using a glossy ceramic dial and pairing it with comfortable rubberised straps, Amazfit’s Pace has blurred the lines between sporty and classy. A fringe benefit of using a ceramic casing over stainless steel is that the former shows less sign of wear and tear after extended use. In fact, you’ll be hard-pressed to find any dings in the product shots of my review unit as well – it’s really hard to scratch the Amazfit Pace. Adding to its ruggedness, the Amazfit Pace ships with IP67 certification and therefore, the smartwatch won’t stop ticking if you take it into a pool with you. Unfortunately, the smartwatch doesn’t let you track your swims, which makes it a moot point. 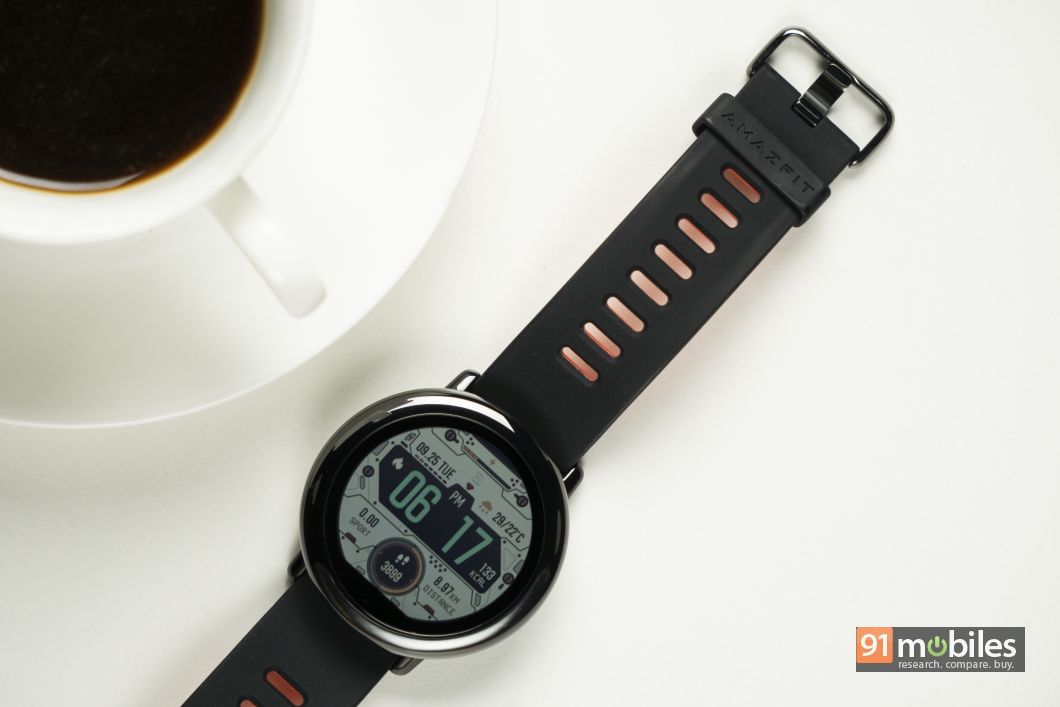 Unlike the pricier Amazfit Stratos, the Pace ships with just one button, which has been cleverly hidden on the underside of the ceramic casing. The button has two functions – to wake/lock the smartwatch and to act as a home button. Therefore, until you press the button, you won’t be able to interact with the Pace’s touchscreen display. That’s great if you wear the watch to the shower as the display won’t register unintentional swipes. On the flip side, you’ll have to go through one more step before you can read your notifications. That didn’t bother me, though your mileage could vary. 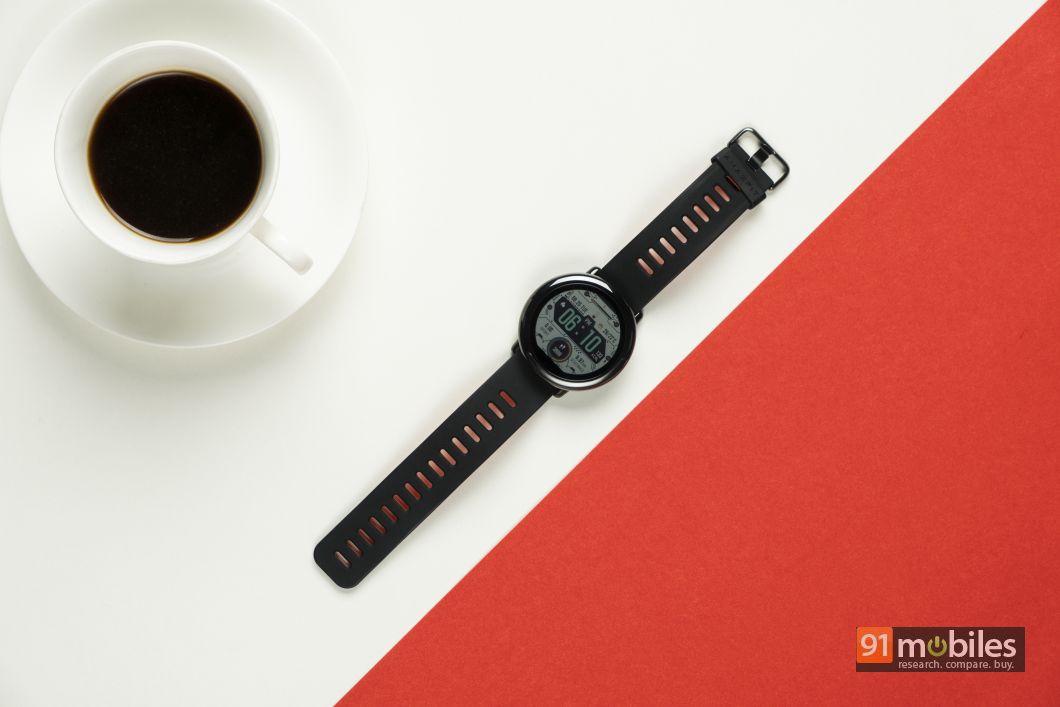 Speaking of which, the Amazfit Pace ships with a 1.34-inch transflective, circular LCD display which to me, is the smartwatch’s best feature. It’s certainly not the sharpest or the most vibrant display in the market as it comes with a resolution of 320 x 300 pixels, but it boasts an always-on functionality and is super-legible under direct sunlight. The touch response of the panel is brilliant too, and I rarely ever had to tap twice for the watch to register my input. All the sensors are housed inside the flat-tyre which is positioned below the display. Thankfully, the chin isn’t all that pronounced and I barely noticed it after using the watch for a day or two. 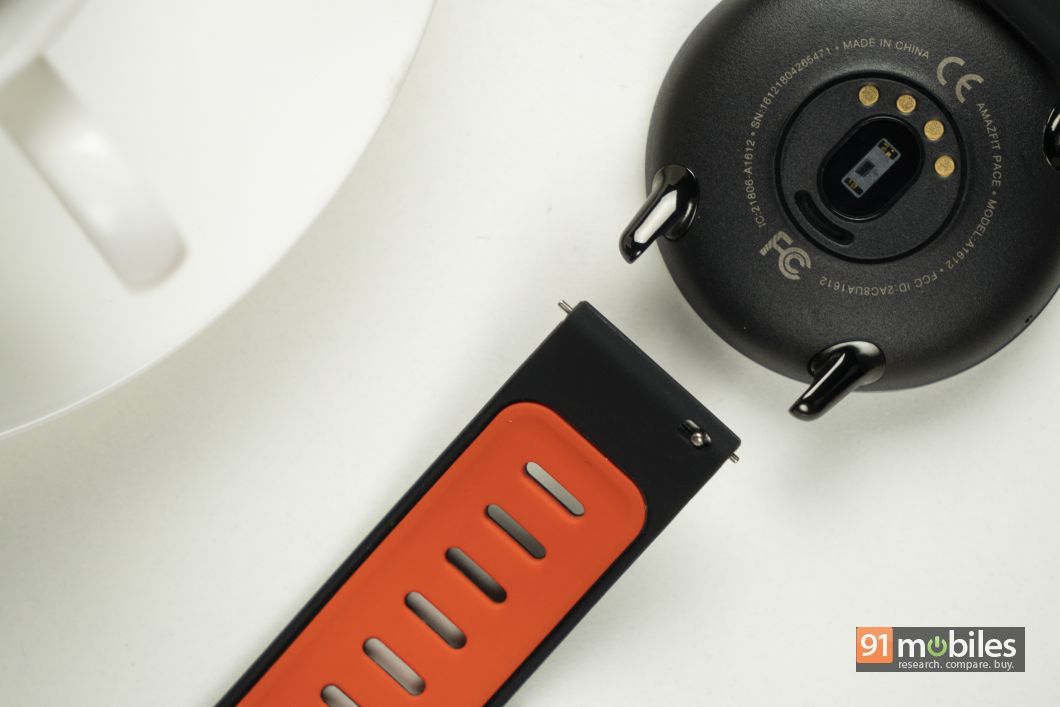 The Amazfit Pace is extremely comfortable to wear too, thanks in no small part to the wearable’s chamfered edges which don’t bite the wrist. Moreover, the watch makes use of quick release pins and therefore, you can swap out the bundled rubberised bands if you want to customise the look. I faced no issues wearing the watch to bed either, which is great as the Amazfit Pace comes with a nifty sleep tracking feature which determines the quality of your night’s sleep. Just make sure to turn the watch’s ‘lift to wake’ feature off before hitting the bed, else you’ll be blasted by a bright light every time you move.

The Amazfit Pace comes with a laundry list of fitness features and the watch can help you track your steps, runs (both indoors and outdoors), cycling sessions as well as a myriad of different sports such as tennis and football. You can even head over to the training center and start a strict regime if you’re serious about your fitness. What’s more, thanks to the inclusion of both GPS and GLONASS, the watch manages to accurately track the aforementioned activities down to a tee. All the processing is handled by a dual-core processor which works alongside 512MB of RAM and 4GB of built-in storage, which you can use to store songs on the watch. 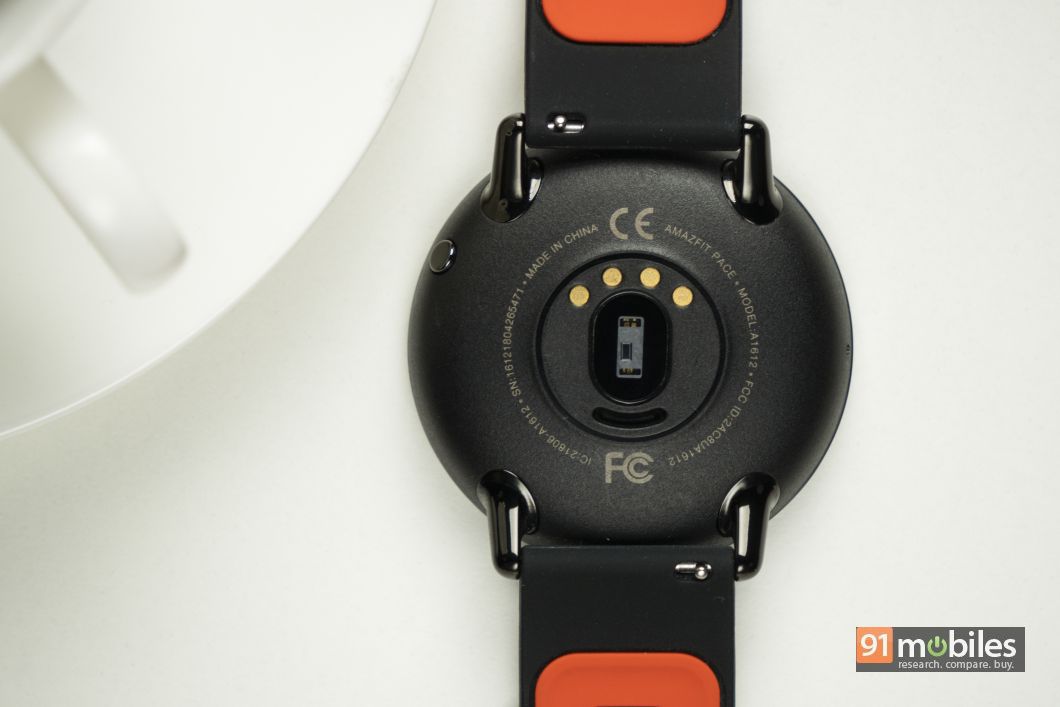 An optical heart rate sensor can also be found on the belly of the smartwatch, which presented me with fairly accurate numbers. I compared the sensor’s readings to both the Xiaomi Mi Band 3 (review) as well as the Goqii Vital and got near identical results on all the three devices. 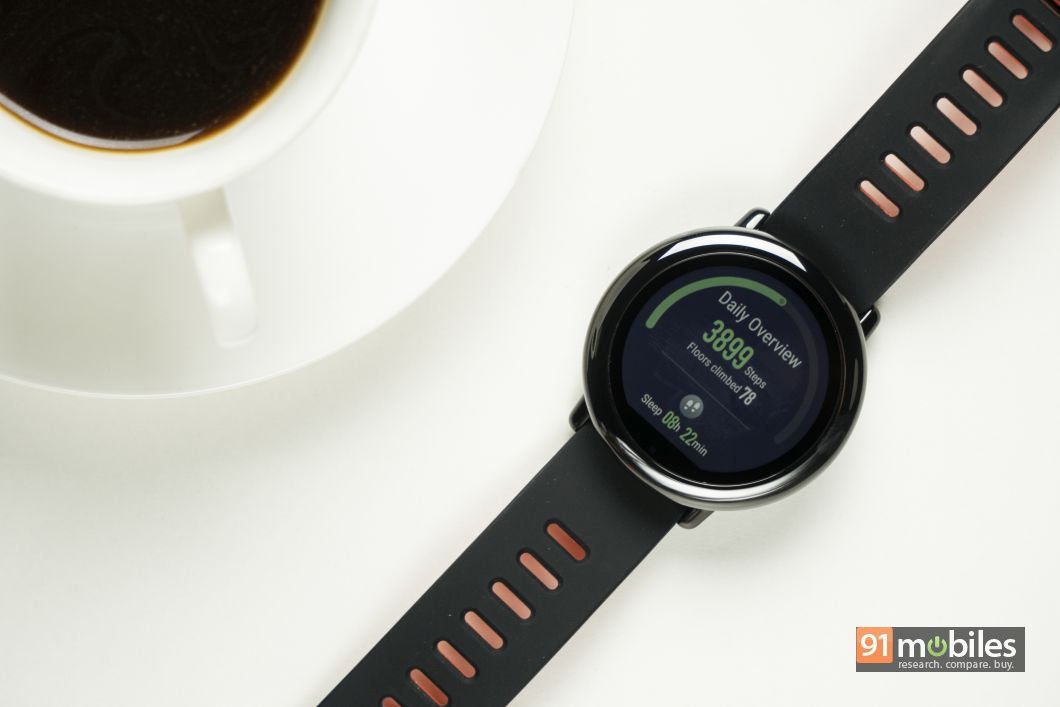 Now, I am recovering from an ankle injury and therefore, didn’t run a whole lot during my week with the Pace. That said, the watch managed to accurately track my steps during the entirety of my review period. The Pace also does a fantastic job at dismissing ghost steps and therefore, it’s hard to fool the watch into thinking you’ve reached your step goal for the day.

The Amazfit Pace does a remarkable job at tracking your cycling too. As I mentioned previously, the watch comes furnished with a built-in GPS and therefore, is able to accurately track the distance you’ve traversed. On one occasion, I rode my bike across a 1.5Km track five times, and the Pace notified me that I’d peddled 7.6Km, which was spot on. What’s more, the watch will even give you insights on your top-speed, your average speed, your heart rate (minimum, average and maximum) as well as your elevation gain. The Pace’s interface also deserves a mention, which neatly compiles all the relevant data on the watch itself and I rarely ever had to open the companion app on my smartphone to get insights on my stats. 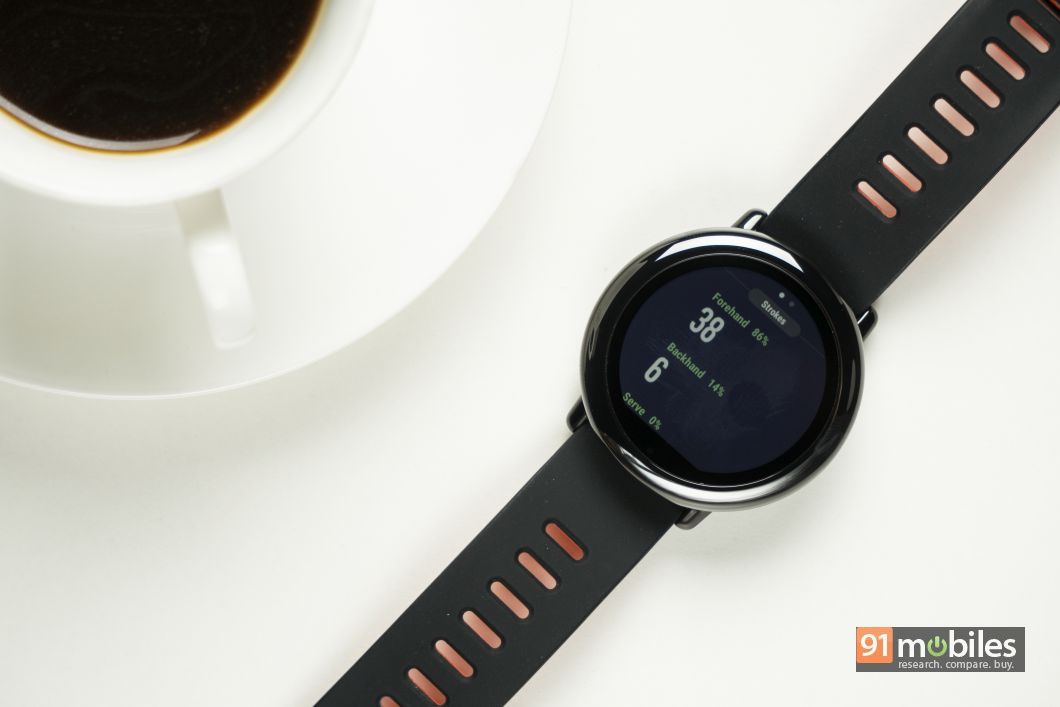 The star of the show, however, is how well the watch tracks sports like tennis. Now, granted, I mostly played table-tennis during my time with the watch but the tracking should hold up for most racquet-based sports like Squash and Badminton too. Now, since table tennis doesn’t involve the same level of motion, the results were a bit off during my first game. However, in the next game, I made a mental note to only play smashes (increased range of motion) and the watch calculated the number of strokes I’d taken rather accurately. What’s more, the Pace even gave me insights on how many forehand and backhand shots I’d taken in the game, which is phenomenal.

Here’s where things start to go downhill for the Amazfit Pace. For starters, unlike most smartwatches, you won’t be able to install third-party applications or watch faces on Pace’s proprietary OS. The wearable does come bundled with 30 different watch faces which look really nice, but I would’ve appreciated if I could add more. Moreover, my review unit of the Amazfit Pace outright refused to pair with any Android smartphone which was running on Android 8.1 Oreo. 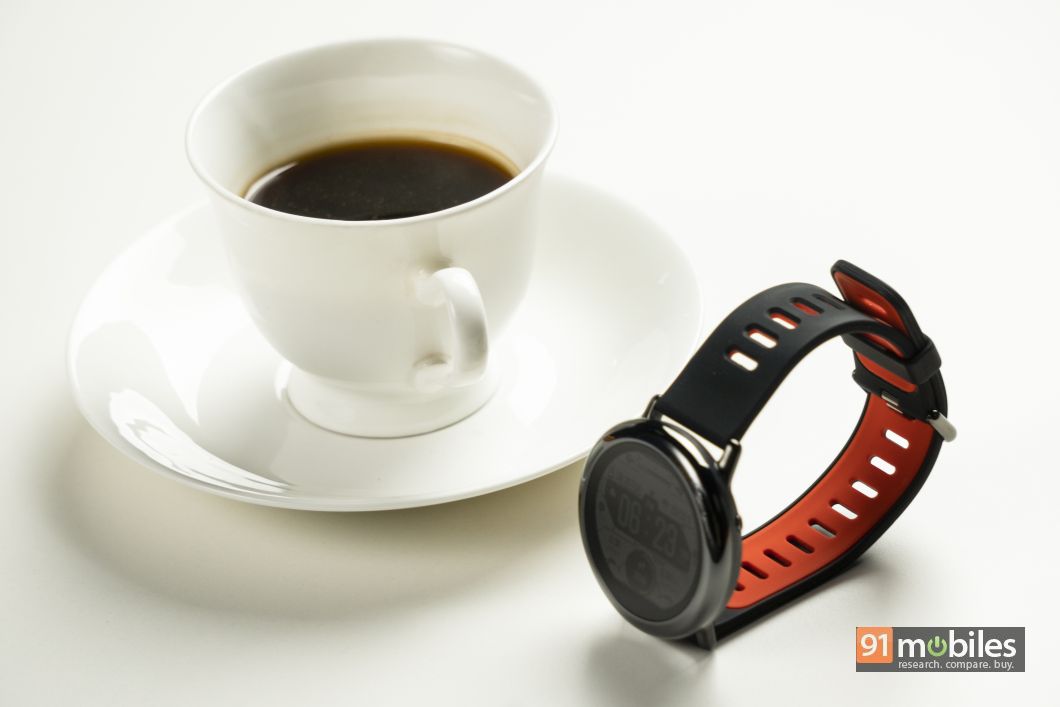 The solution? I had to scour a device which ran Android 7.1 Nougat, install the Amazfit app on it and pair the phone to the smartwatch. I was then prompted to do download a total of five updates on the smartwatch and only then was I able to pair the Pace to my OnePlus 6. Thankfully, in my case, I had access to devices which ran a year old version of Android, but I’m guessing most buyers who purchase the watch won’t.

On the flip side, navigating around the watch’s OS is buttery smooth and doesn’t take long to get used to. You can swipe up to bring up the notification tray and swipe down to pull up a quick settings panel. A swipe towards the right will bring up the exercise modes, whereas a swipe towards the left will show you the rest of the applications on the watch, such as Alarm, Timer, and Stopwatch.

Before I move on to the next section, I’d like to give props to the developers who designed the Amazfit Pace’s companion app too. The app has a clean, user-friendly interface and it doesn’t flood the screen with unnecessary stats. Instead, the data is neatly divided across different sections, making it that much legible to read and consume.

The Amazfit Pace connects to compatible devices over Bluetooth v4.0. The smartwatch also ships with support for Wi-Fi and BLE (Bluetooth Low Energy), which presumably lends the wearable its excellent battery life. 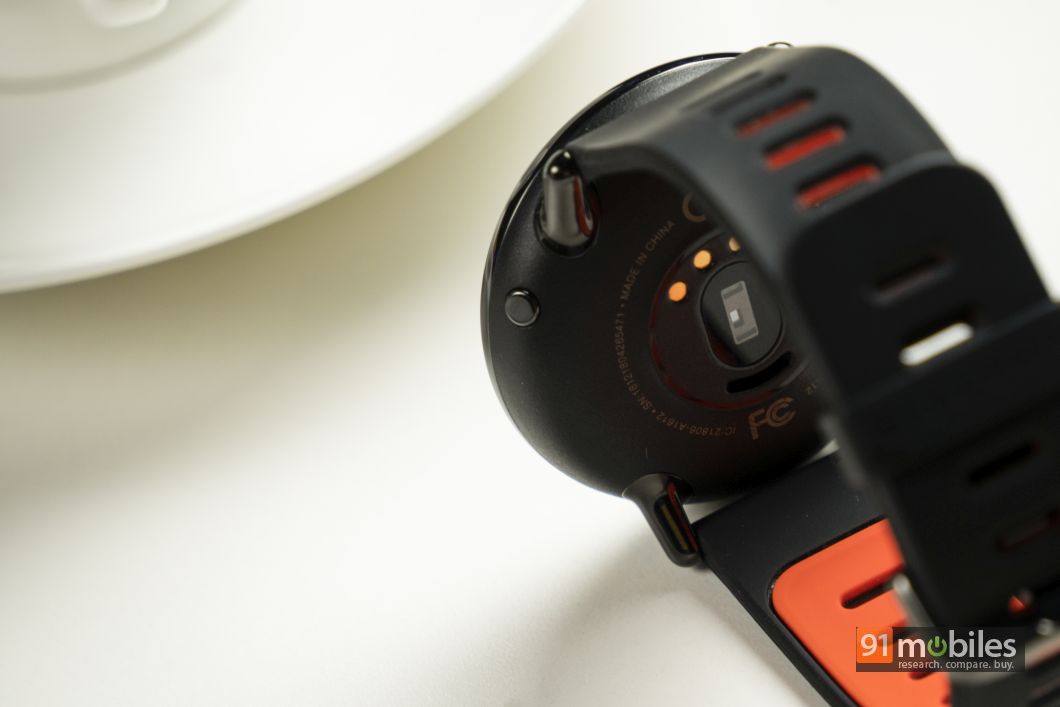 During my review period, I was constantly getting close to four days of battery life with the smartwatch and that’s with both, the push notifications, as well as the GPS, turned on. Truth be told, the Pace’s battery life alone made me want to buy the smartwatch in the first place.

The Amazfit Pace is an excellent smartwatch and for its asking price of Rs 9,999, checks all the right boxes. The smartwatch ships with an outstanding battery life, offers a host of fitness-tracking features and looks stylish on the wrist too. If there’s one critical flaw of the Pace, it’s the wearable’s inability to pair to devices running Android Oreo from the get-go. 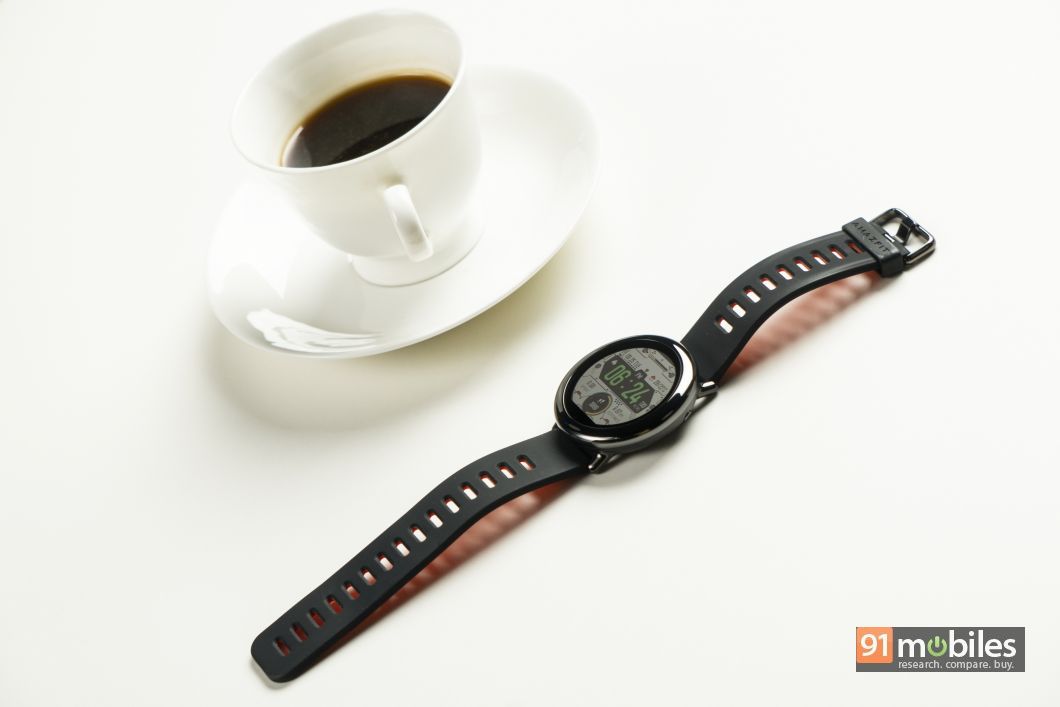 That said, if you can somehow source a smartphone running Android Nougat, then you’ll be amazed by what the Pace can do for you.