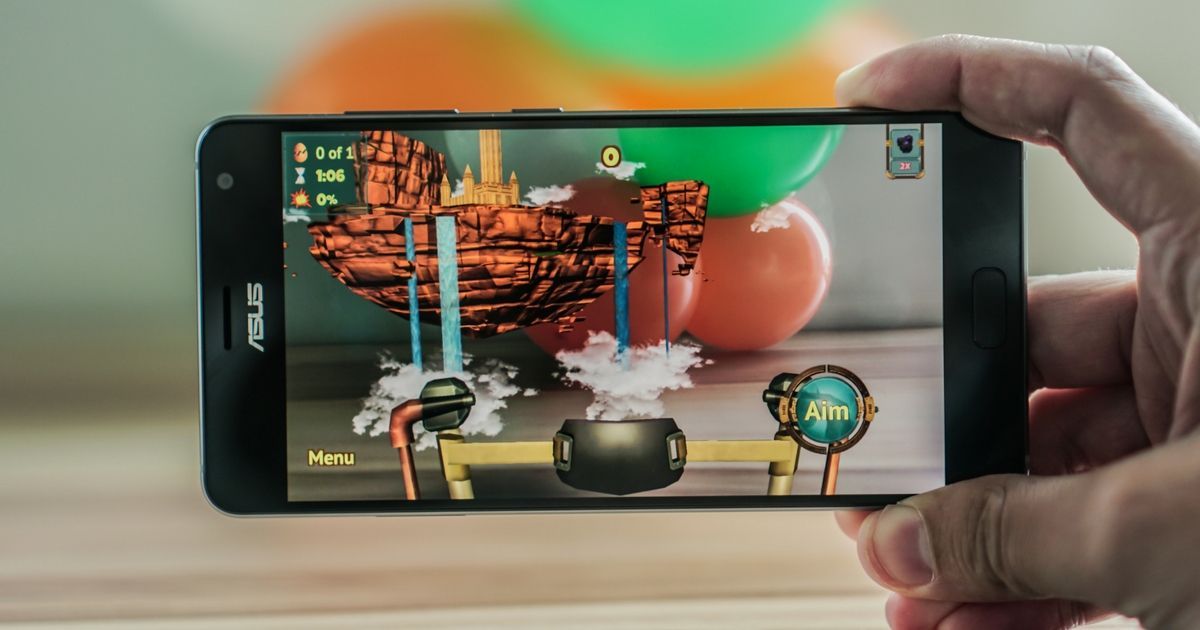 AR and VR have been the buzzwords over the past few years. Both Augmented Reality and Virtual Reality come across as great technologies – albeit more often than not, just theoretically. The mass-market consumer products in these segments have been few and far between, and many of them haven’t realised the full potential of these technologies yet. Taiwanese giant ASUS aims to change that with the ZenFone AR (first impressions) – which was showcased first at this year’s CES. The loaded smartphone was launched recently in the Indian market. The bragging rights of the smartphone include the fact that it’s the world’s first (and only) device with support for both AR and VR. But that’s not all, it also features flagship-level specs, including SD821, 8GB RAM and a 23MP rear shooter. Priced at Rs 49,999, is this the high-end phone that you should be going for? Let’s find out. 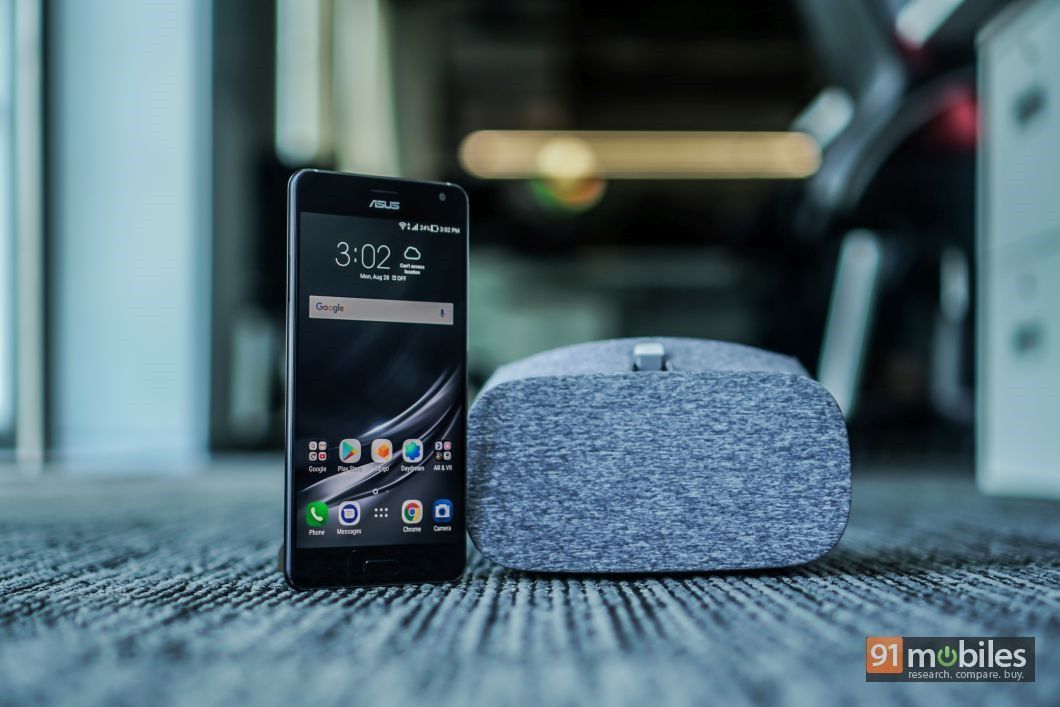 As noted in our first impressions of the ASUS ZenFone AR, the phone doesn’t look much different from the ASUS ZenFone 3 Deluxe (review). You get a large 5.7-inch display up front, which means it isn’t meant for a single-hand usage. It’s quite thick when compared to its peers at 9mm, and also has a significant heft at 170g. But that gives it a solid build. 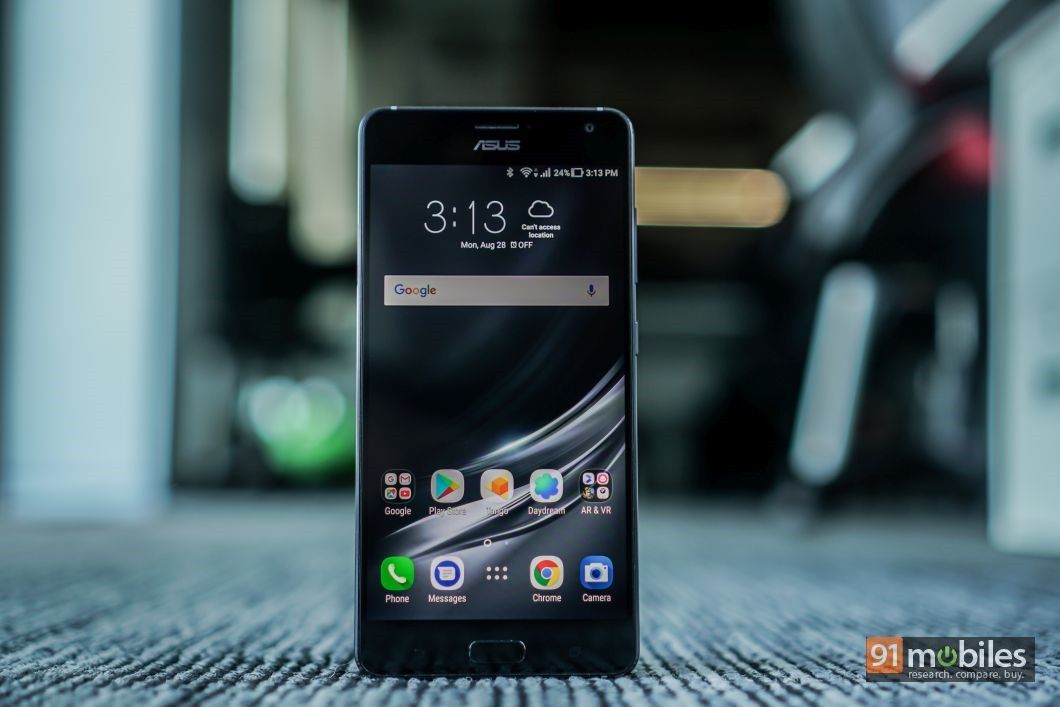 Along with the display at the fascia, you’ll find ASUS branding, an earpiece, a couple of sensors and a front-facing shooter above, and a row of navigation keys below. These buttons follow the usual Android convention, with the first one being used for returning to the previous screen, second being a physical home key that also doubles up as a fingerprint reader and the last one letting you access recently-opened apps. The biometric authentications works quite well and accurately.

Thanks to the metal frame, the ASUS ZenFone AR seems quite solid. The antenna lines are present on the top and bottom, while the placement of ports and buttons is nothing out of the ordinary. 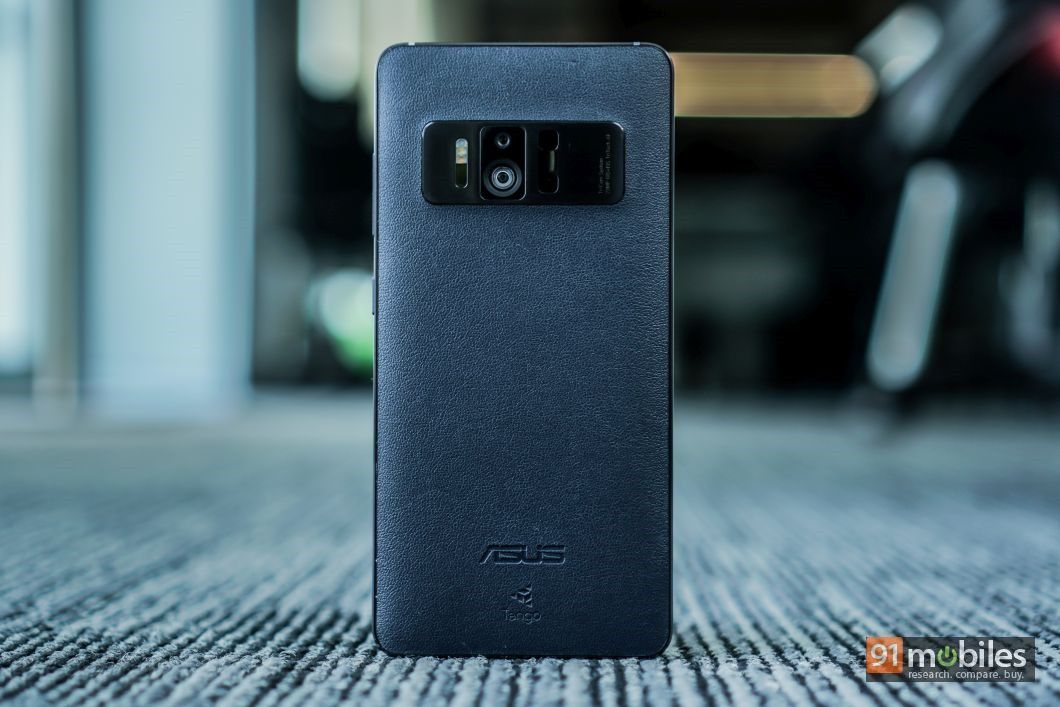 The rear is where things get interesting. The ZenFone AR’s back is made out of faux leather, which gives it a premium appeal along with providing excellent grip. The texture also keeps the smudges and fingerprints at bay. Along with the primary camera, the device also features depth and motion-tracking sensors, which provides it with the AR capabilities. There’s also an LED flash and a laser-focussing module alongside. The entire setup juts out slightly and is placed on a metallic strip.

For a device that focuses on the immersive aspect, the ZenFone AR lives up the expectations with the 5.7-inch panel offering rich 2K resolution. The colours are pleasing and the text, without a doubt, is crisp. The brightness levels and viewing angles are also fine, and we didn’t find any issues while reading the display outdoors. To protect your eyes in the low light, you can enable the Bluelight filter. Making the screen impervious to scratches is a layer of Corning Gorilla Glass 4. 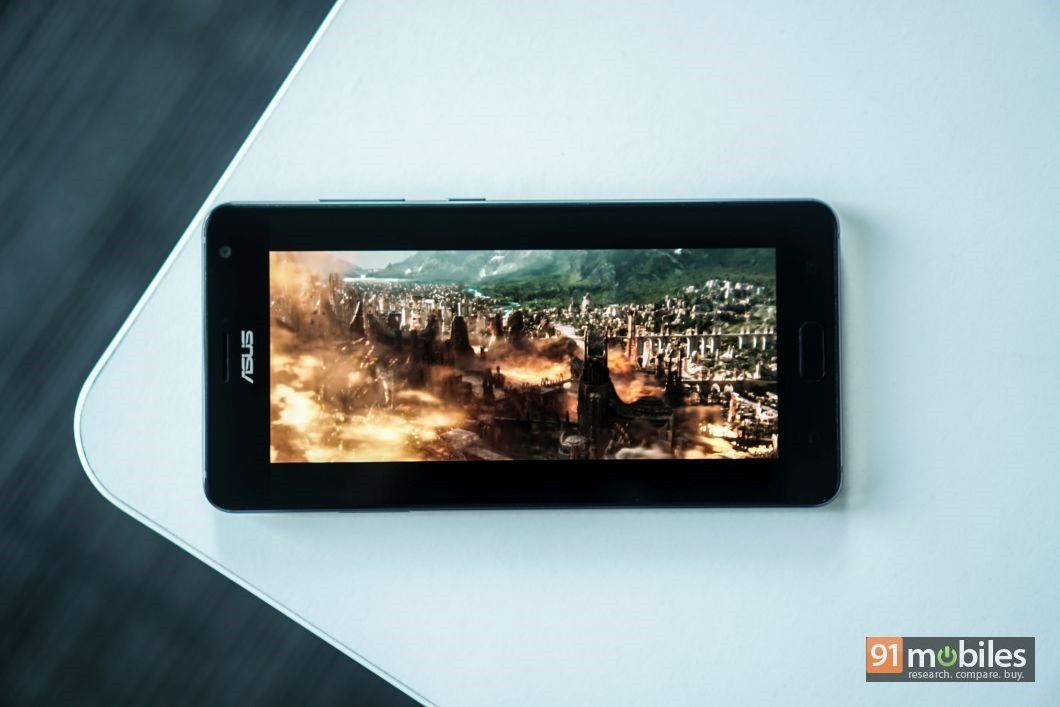 AR: do the tango

The ASUS ZenFone AR is the second smartphone after the Lenovo Phab 2 Pro offering AR capabilities via Google Tango. If you’re unaware, Tango is the Alphabet-owned company’s mobile-based AR computing platform. With the help of a variety of sensors, it can detect the relative position of the smartphone, and thus enable indoor navigation, virtual measurements, and gaming (remember Pokémon Go, the game that utilises augmented reality in its simplest form). 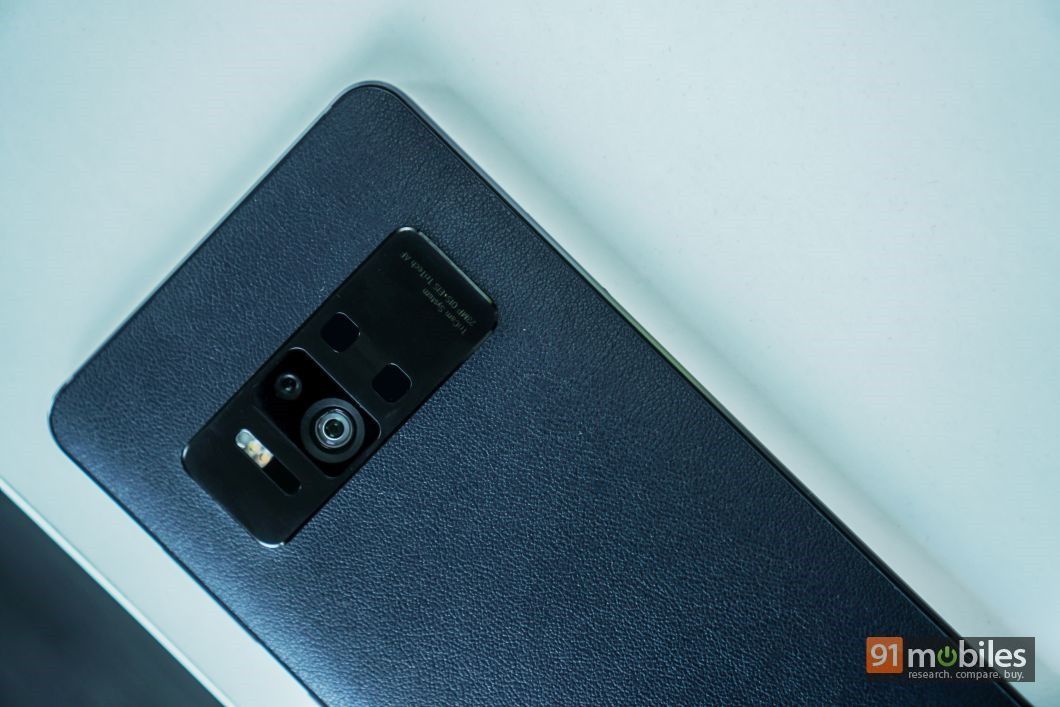 The ZenFone AR comes packed with a motion-tracking sensor and depth-sensing camera, which along with the 23MP primary camera, helps in tracking its relative position in the room. ASUS has added quite a few apps that demonstrate what all one can do with augmented and virtual reality. Measure for instance, makes it dead easy to measure the distance between two real-world objects. iStaging is slightly more useful as it lets you map your room by trying out different furniture and envision its placement anywhere. The BMW i Visualiser is more interesting as it lets you place the BMW i3 or i8 in front of your eyes and analyse the cars from all angles. It also lets you see their interiors. It’s not all work though, as the Slingshot Island game lets you throw slings to destroy obstacles. It also has the Towers for Tango app, but it’s odd that even though it’s preloaded, you’ll need to buy it from the Play Store. 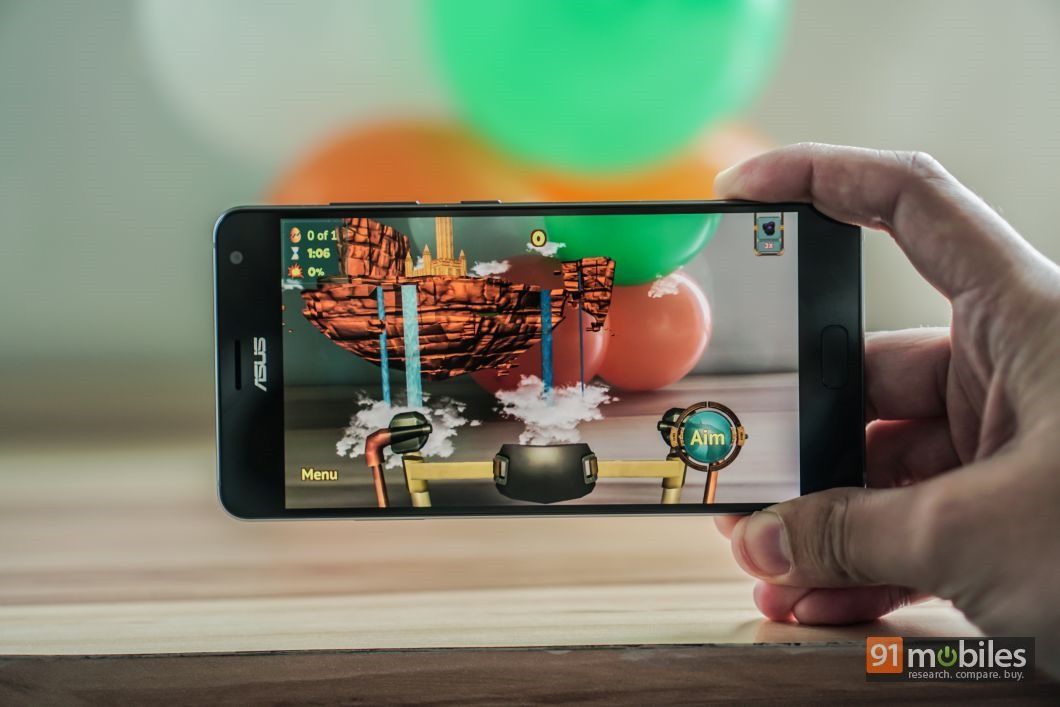 While these apps are interesting to use, the novelty wears off soon. None of them really have stickiness as such. There aren’t that many apps on the Play Store either, and many of them aren’t available in our country. Using these apps not only results in the ASUS ZenFone AR heating up, but also take a toll on the battery life.

Overall, the idea of Tango is good, but the implementation isn’t. That’s why Google has recently announced Tango’s spiritual successor in the form of ARCore. Just like Apple’s ARKit, this will allow any Android-powered device to offer augmented reality features (without having too much dependency on hardware), and developers will also have wider user base for their apps.

Google’s Daydream platform on the other hand, is more evolved. All you need is to insert the ZenFone AR inside the Daydream View headset, follow the initial setup, and voila. There are a plenty of apps on the Google’s storefront, focussing on multimedia consumption or games. Speaking of games, you can use the Bluetooth remote controller to play them. 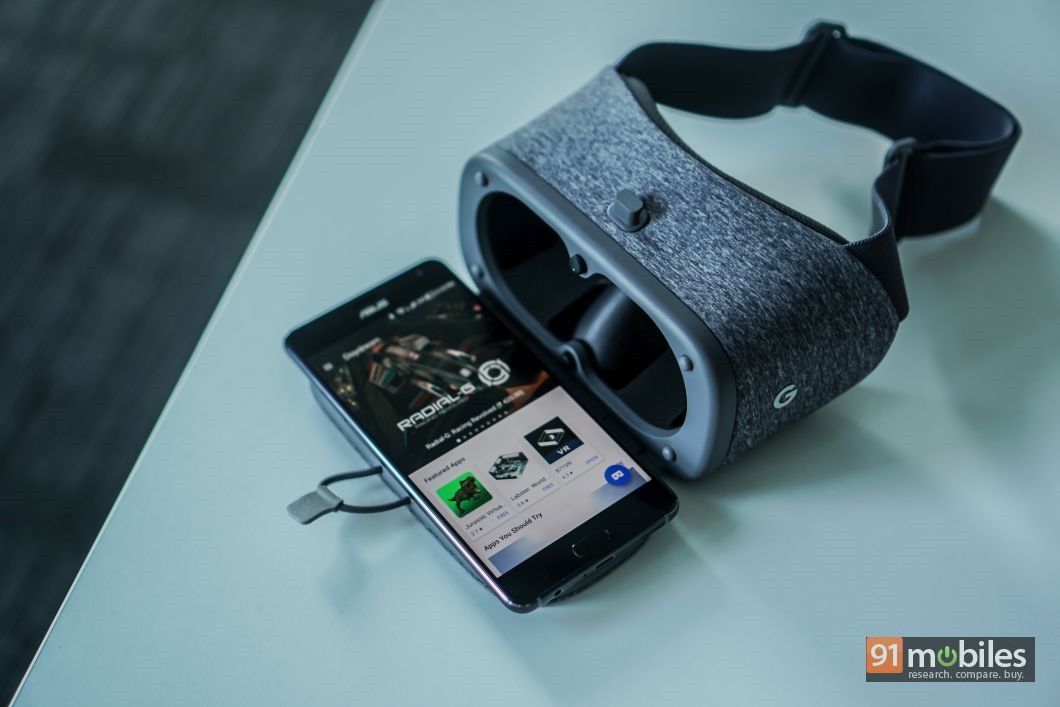 As mentioned in our first impressions, the Daydream headset is extremely comfortable to wear, and the its fabric makes it lightweight too. 2K resolution on the ZenFone AR’s large 5.7-inch canvas offers an immersive and sharp experience. However, the smartphone doesn’t offer anything over and above other Daydream-compatible smartphones. Neither it’s optimised really well, as it starts heating up within just 15 to 20 minutes of VR usage.

Camera: the devil lies in the details

While most smartphone manufacturers are opting for lower camera resolutions in order to offer a bigger sensor for promising better pictures, ASUS thinks otherwise. The ZenFone AR comes with a high-res 23-megapixel f/2.0 Sony IMX318 sensor with all the bells and whistles you could expect from a flagship. It has both OIS and EIS, and also promises fast autofocussing speeds thanks to the brand’s TriTech system. The camera utilises PDAF, laser AF as well as the usual contrast detection methods to quickly lock the focus on the subject. 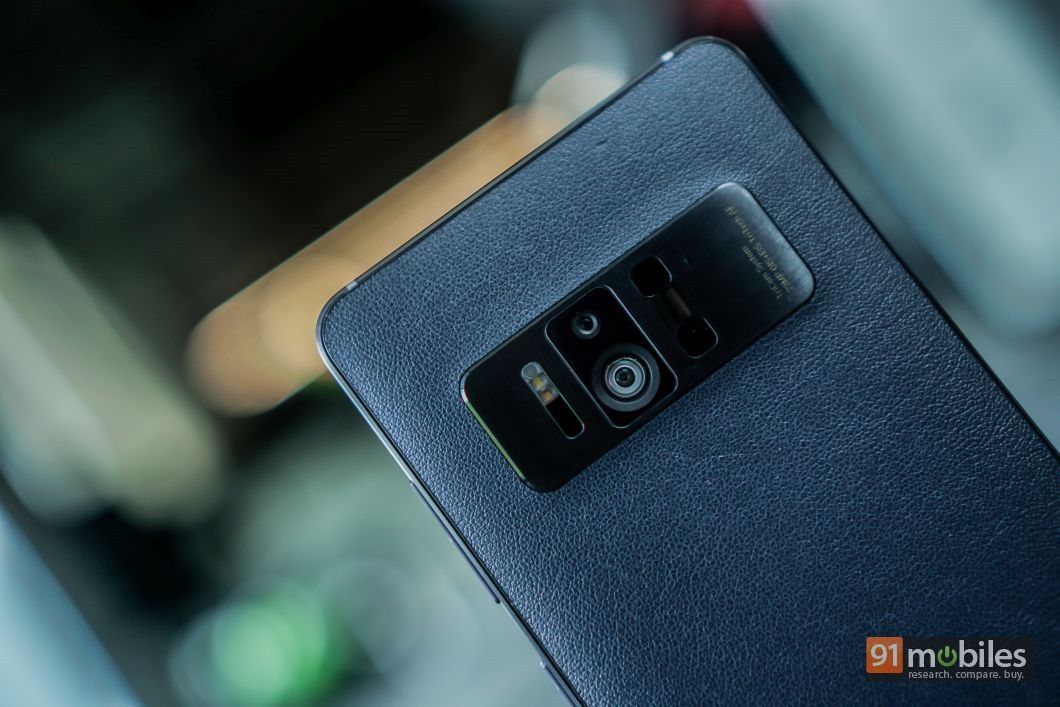 The camera interface on the ASUS ZenFone AR is similar to the company’s previous offerings, with the bottom bar offering a shutter button, the option to switch to the manual mode, start video recording, preview the images / videos, and enable a number of modes. These modes include Super Resolution, Low Light, Depth of Field, Smart Remove, and Slow Motion, among others. At the top, you’ll find the toggles for flash and HDR along with the ability to switch to the front camera. Hitting the settings give access to focus and metering modes along with the ISO, white balance, exposure, etc. (though you can also tweak them in the Pro mode). 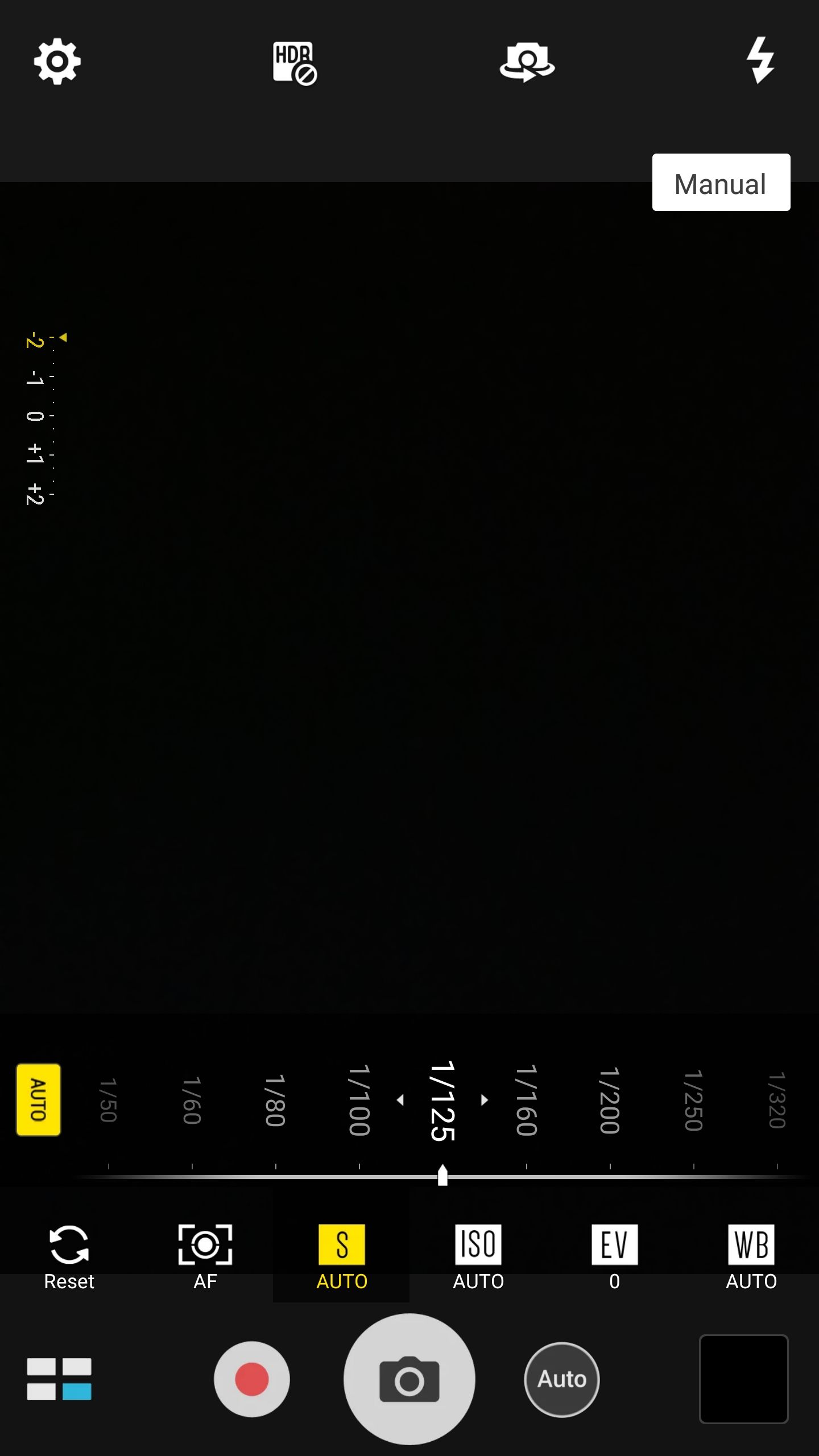 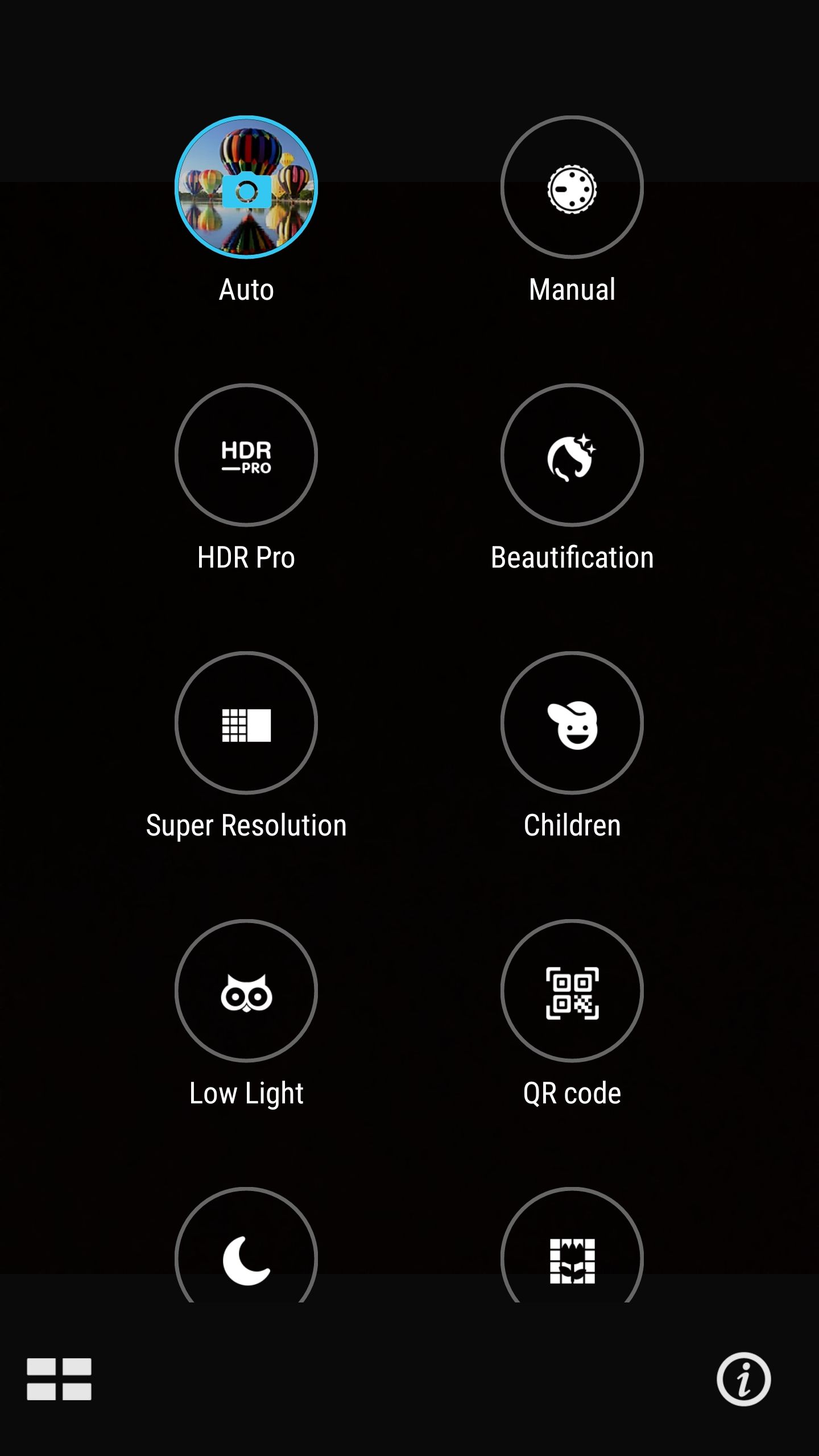 The pictures do complete justice to our expectations, offering incredible level of detail and reproducing accurate colours. The long shots capture the landscape well and you could easily differentiate between various objects. Turning on the HDR mode enhances the image further. Close-up shots are also pleasing, although we noticed it has slight difficulty in focussing from shorter distances. Talking about focussing speeds, while they are quite fast, we didn’t found them to be as instantaneous as promised with the TriTech AF. One can also use various modes, depending upon the situation. The Night mode, for instance, reduces the resolution in lieu of better details, while depth of field introduces software-based bokeh effect (although the results seem quite artificial, if you ask us). We’ll now let the pictures do the talking, embedded in the gallery below.

Coming to videos, the ZenFone AR can shoot them in 4K resolution along with letting you capture slow-mo. Selfies come out nicely thanks to the 8MP snapper at the front.

In a nutshell, the ASUS ZenFone AR is a powerful camera phone, though falls short of being the best with dual camera-toting devices becoming prevalent. Though the power users would love the ability to capture RAW images.

Hardware and software: powerful to the core

While the OnePlus 5 became the first smartphone in India with 8 gigs of RAM, the ASUS ZenFone AR is actually the world’s first phone with this capacity. And the brand has brought the same variant in India (globally, there’s a 6GB RAM model too, but that has not been launched here). While one might argue that such a high amount of RAM is an overkill, it certainly helps in the case of the ZenFone AR for crunching AR and VR applications. Multitasking is silky smooth as well, and opening and switching between apps is instantaneous. The best part is that even with ~15 apps opened, there’s more than 3GB of spare RAM capacity. Combined with the 2.3GHz Qualcomm Snapdragon 821 chipset, the device offers flawless performance. There was nary an instance where the handset showed any trace of lag. 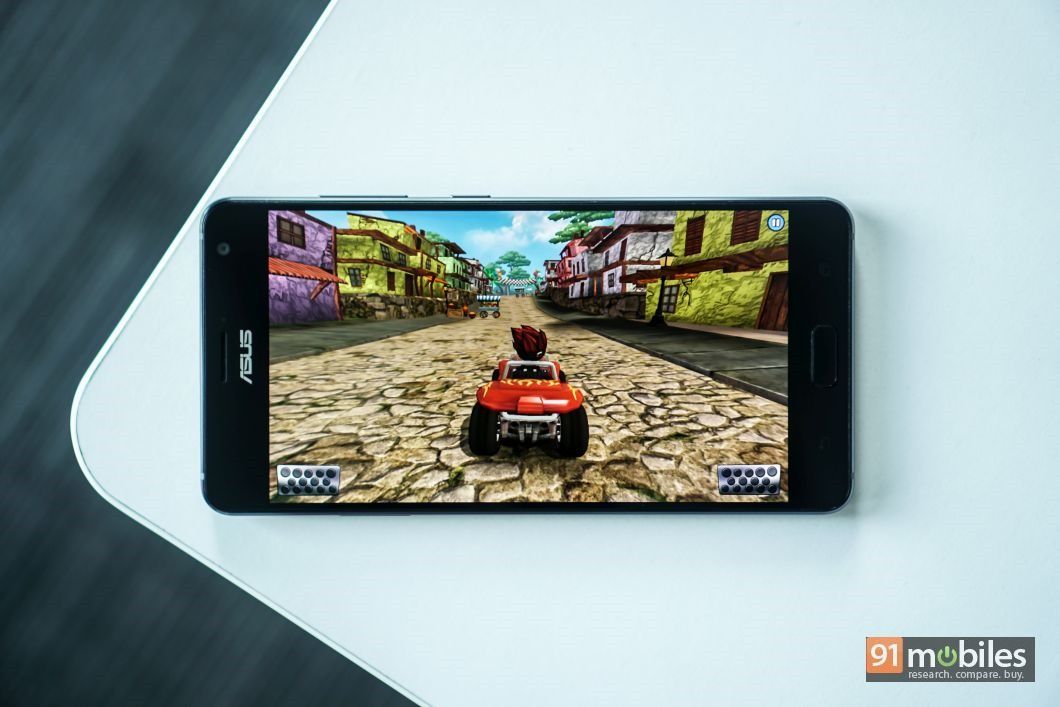 Gaming on the ZenFone AR is also a delightful experience, with the Adreno 530 GPU able to render 3D graphics well. We played casual titles like Beach Buggy Racing and heavy titles such as Need for Speed No Limits for long sessions and found the performance to be top notch. Sadly though, the device is unable to keep the heating issue in check. Within just 15 to 20 minutes of gaming or using GPS for navigation, it heats up considerably. 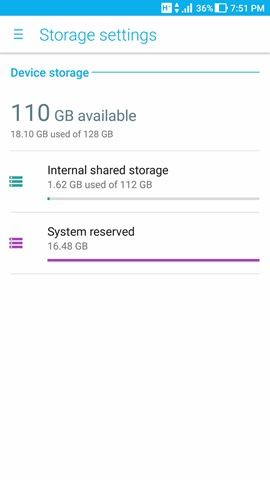 Taking care of the storage needs is 128GB of memory onboard, out of which around 110GB is available for the end users. You can also add to it with the use of a microSD card, but that means that you won’t be able to use two SIM cards with the smartphone.

Software-wise, the ZenFone AR generates the same feelings as other offerings from ASUS’ stable. The ZenUI running atop Android 7.0 is heavily skinned – with hardly any references to the design language opted by Google. Thankfully though, the brand has cut down on the amount of bloatware, and there are very few apps and games preloaded, such as Facebook, Instagram, Asphalt 8, etc. along with the ones mentioned above for demonstrating the AR and VR capabilities. 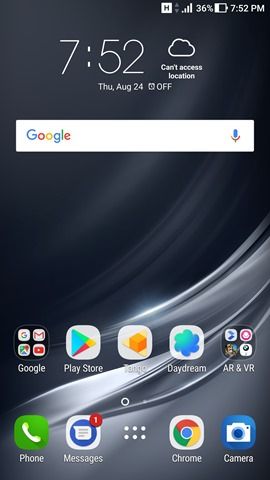 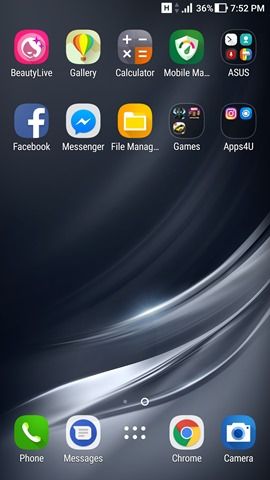 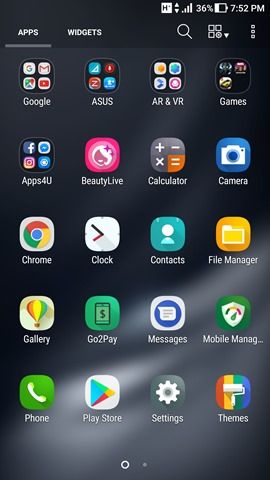 For all its impressive specs and features, the battery of the ASUS ZenFone AR is a slight letdown. Rated at 3,300mAh, it barely manages to get you through an entire day. If you use it more rigorously, then it might even need a recharge in the middle of the day itself. Thankfully, there are some battery-saving modes that come in handy in such situations. The device offered an SOT of around three hours and a half, which is okayish, though it performed above average in our battery test by playing an HD video on loop for around 13 hours. With the support for Quick Charge 3.0, the phone can be juiced up quickly. 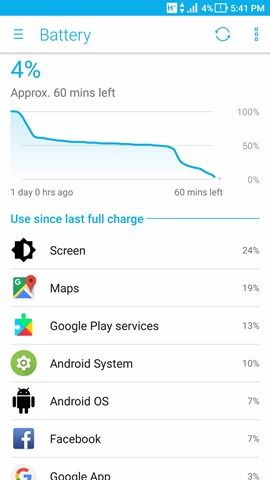 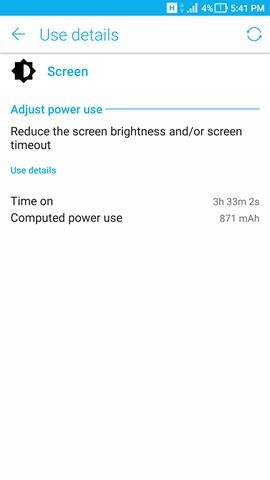 It’s no doubt that the ASUS ZenFone AR is an ambitious smartphone – and the one that gels with the Taiwanese brand’s philosophy quite well – offering innovative and industry-leading features such as support for both Augmented and Virtual Reality, and 8GB RAM, along with a powerful spec sheet. It’s also able to justify its price tag of Rs 49,999 for this very reason. 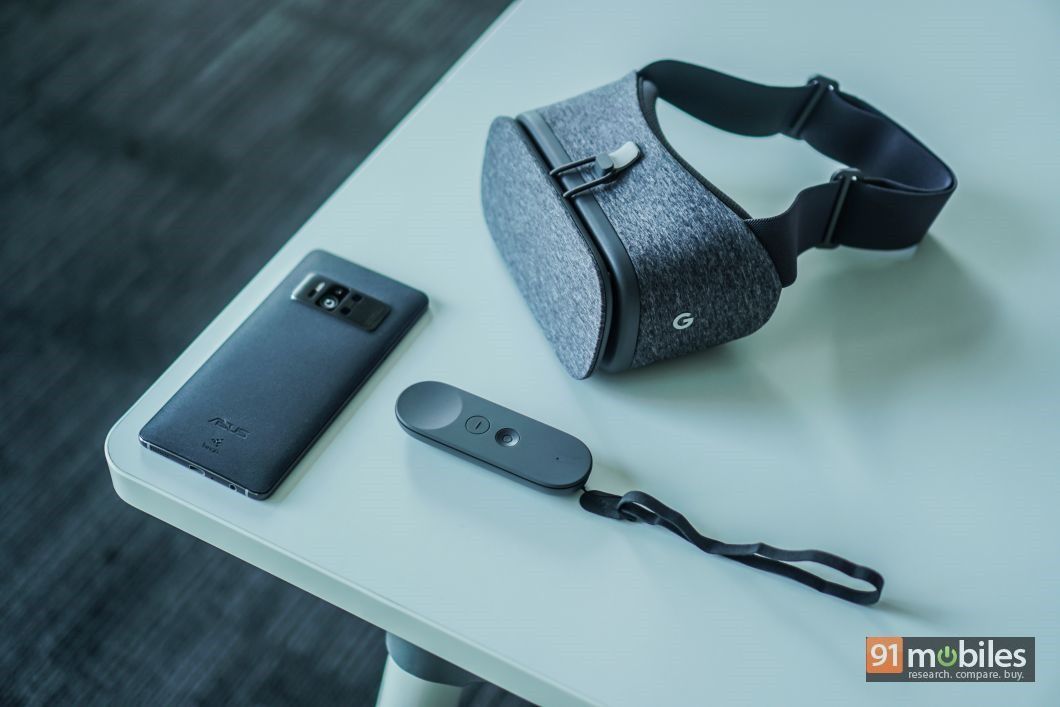 Having said that, if you discount the AR and VR capabilities – which are still in nascent stages and don’t offer powerful use-cases apart from some options for fun – the ZenFone AR is like any other premium smartphone. That also means that in its price band, it’s up against heavyweights such as the Google Pixel XL (review), Samsung Galaxy S8 (review) and the HTC U11 (review). Then there are upcoming smartphones such as the Nokia 8 (first impressions), which should be priced similarly, and offer a fully-loaded spec sheet.