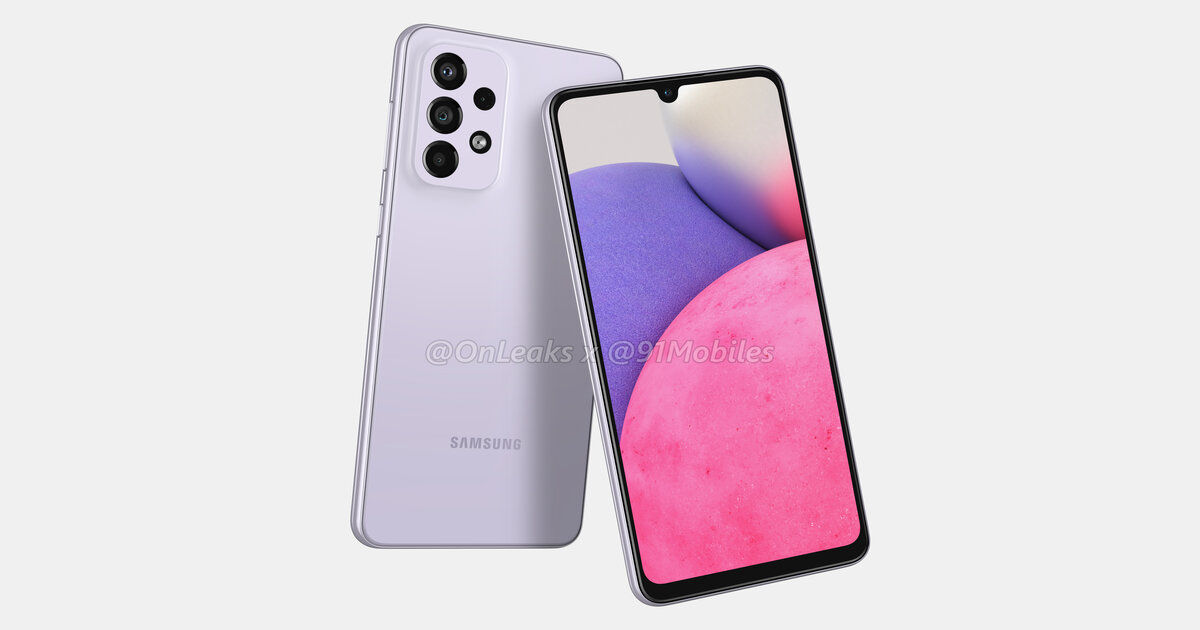 Samsung released the Galaxy A32 5G in January of 2021 and then followed up with the 4G Samsung Galaxy A32 by the next month. Now, in collaboration with Onleaks, 91mobiles is ready to share the renders of the upcoming Samsung Galaxy A33 5G. We have also learned about the Samsung Galaxy A33 5G specifications. The images reveal two colour options of the upcoming smartphone with its rear quad-camera setup. According to recent leaks, the phone is expected to launch globally in January 2022. Let’s take a look at the phone’s design and specifications below.

The Samsung Galaxy A33 5G will come with a 6.4-inch flat display with an Infinity-U punch-hole design that features a selfie camera. The phone is expected to don an FHD+ Super AMOLED display. It will have a quad rear camera setup, with the details of the camera sensors still unknown.

The smartphone will come with a USB Type-C port for data and charging needs. But the Samsung Galaxy A33 5G will ditch the 3.5mm headphone jack, which could be a bummer for multimedia enthusiasts. The phone measures 159.7x74x8.1mm and comes with a 9.7mm thickness. Previously leaked information suggested that the phone will launch in Orange, Light Blue, Black, and White colour options. We do have official renders of the Black and White colour options of the upcoming smartphone. The rectangular camera module will house a quad-rear camera setup, similar to the Samsung Galaxy A32 5G. However, we should expect, much improved and higher resolution camera sensors from Samsung this time around. Also visible are the cutouts for the bottom speaker, microphone, the USB Type-C connector, volume buttons, and power button. The SIM card tray is also expected at the bottom of the phone. The Samsung Galaxy A33 5G will be a mid-range 5G smartphone from Samsung, and more details regarding the smartphone should be revealed in the coming months. The phone is expected to launch in early January 2022 and may only be available with 5G, with no 4G variant of the smartphone in pipeline. In 2021, Samsung launched both a 4G and 5G variant of the Galaxy A32.