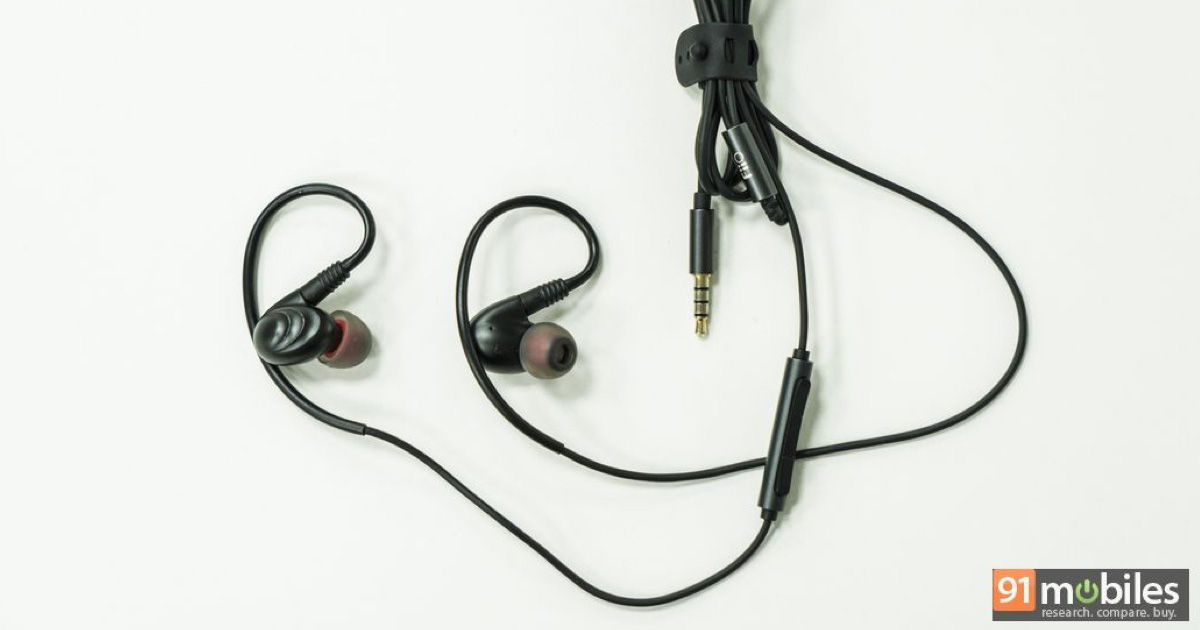 If you are in the market for a pair of half-decent earphones, then you might have seen options listed for as much as the price of a budget smartphone. The cost of the earphones further goes up as the number of drivers inside the IEM’s chassis increase. And the reason for this is that when more than one driver is involved, the sound frequencies are segregated and assigned to individual drivers, providing better sound output at least in theory. Case in point, the recently launched triple-driver IEMs from FiiO dubbed the F9, which cost a pretty penny when compared to the company’s single driver IEMs, the F5 (review). So, do the earphones justify their price tag or is the triple-driver configuration merely a marketing ploy to attract more buyers to the company’s doorsteps? Read on, to find out. 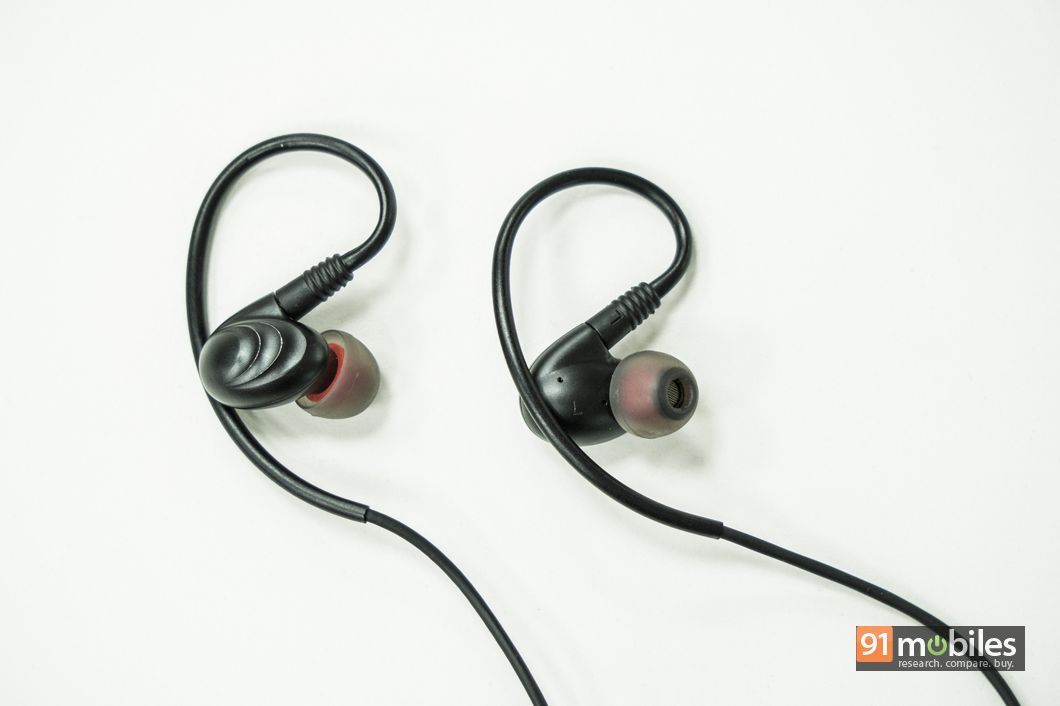 The sound quality of earphones makes or breaks their sale, but that’s not to say that the design of the product is any less important. As far as the F9 are concerned, FiiO claims that the inspiration for the IEMs’ design came from water and that the sleek lines on the outer shell represent ripples in a lake, which I personally loved. Besides adding to the earphones’ cool-quotient, the lines give the FiiO F9 a distinctive character and makes them stand out in the crowd of mundane looking IEMs. FiiO also claims that the line finish improves the structural integrity of the earphones and maximises the amount of space inside, which is helpful for eliminating internal resonance.

Much like the FiiO F5 I reviewed recently, the F9 too ship with detachable cables which connect to the individual earpieces via MMCX connectors. This makes the F9 a lot more durable than hard-wired counterparts, as users can upgrade to a better quality cable down the line should the included cable get damaged. With that said, while the cables connect easily to the earpieces, removing them requires a lot of effort as the connections are a bit too tight. However, unless you experiment with different cables on a daily basis, this shouldn’t be a deterrent for you. 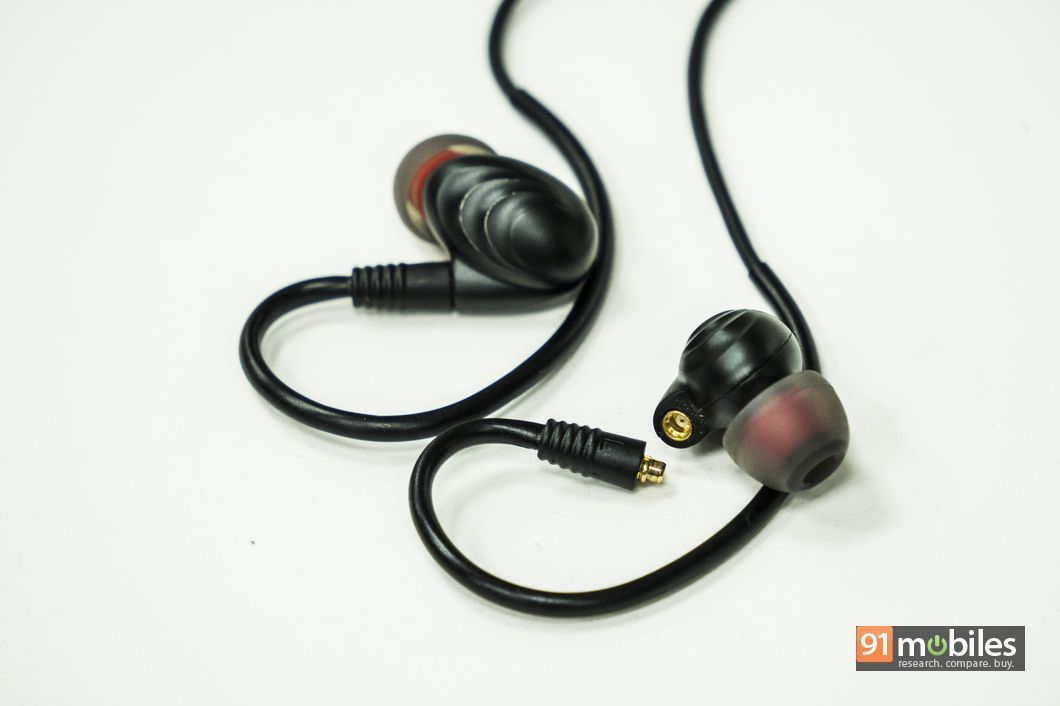 Moving on, FiiO’s choice of material for the construction of the F9 is metal, but don’t let that fool you into thinking that the earphones will weigh your ears down. On the contrary, the F9 are arguably one of the most comfortable pair of earphones I’ve used, and offer excellent fit and in-ear grip. The earphones hook comfortably around a user’s ears and can achieve excellent depth, despite their relatively short nozzles. As a result, you’ll find that the FiiO F9 offer excellent passive noise cancellation out-of-the-box as well.

On the off chance the F9 don’t fit your ears well, you have the option of customising them with different sized ear tips. The F9, much like every other product from the company, comes bundled with a huge assortment of accessories including a hard-shell carrying case, six silicone ear tips as well as two sets of cables. One of the cables utilises a standard 3.5mm connector, but if you want to spruce things up, then you also have the option of using the 2.5mm cable which when paired with the right source, offers incredibly balanced audio. 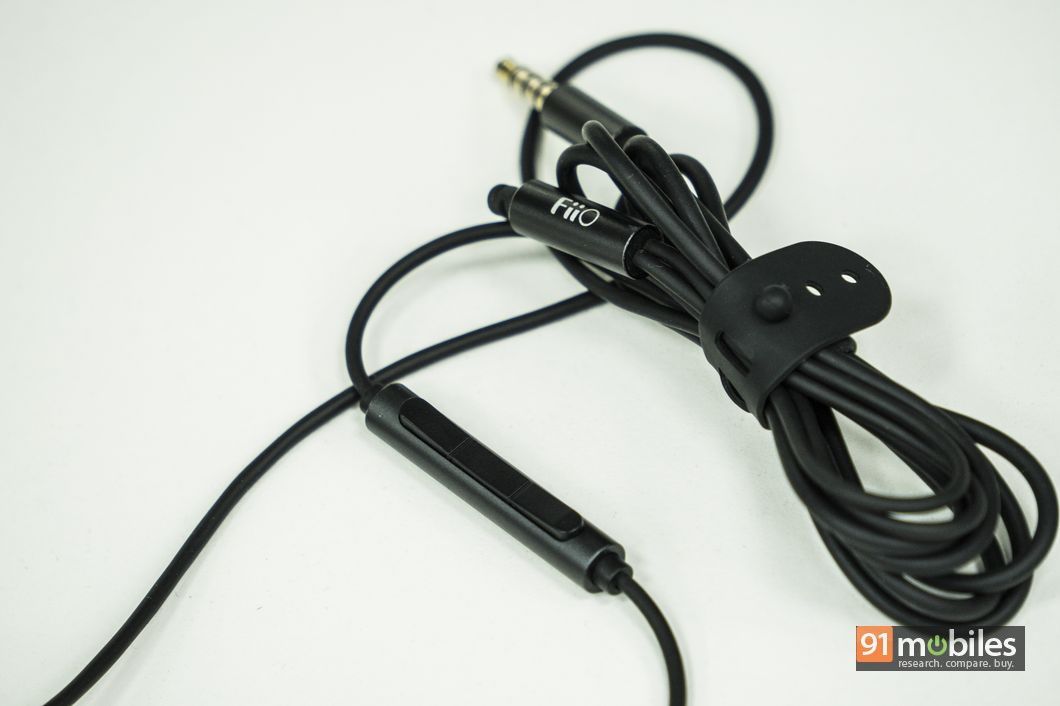 The build quality of the cables is top notch too, in case you were wondering. The 3.5mm cable uses standard TPE material and comes with in-line remote controls, allowing you to switch between tracks without having to take your phone out of your pocket. Unfortunately, while the controls worked well with an Android smartphone (the OnePlus 5T in my case), the volume controls don’t work properly on the Apple iPhone 7 Plus (review). That said, I faced no issues with the built-in mic and could relay my voice clearly to the other end during calls. Moving on, while the 2.5mm cable is also constructed out of TPE material, it’s braided and comes with a slightly softer finish. For the price, the FiiO F9 offer an impeccable build quality bundled in a handsome package which is hard to rival. 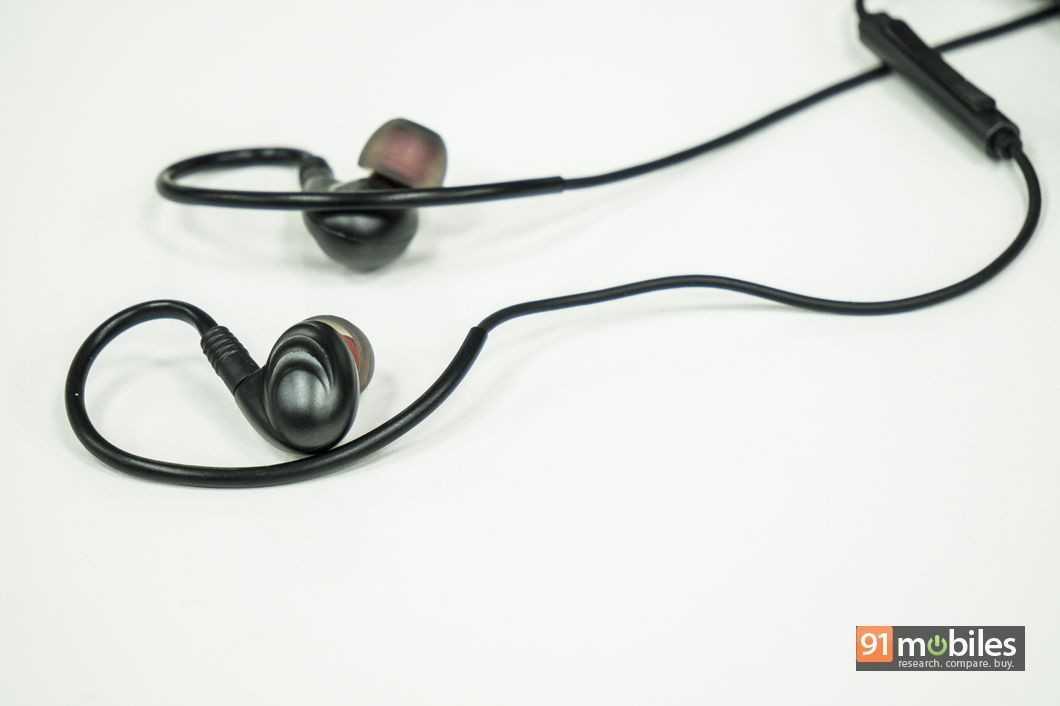 The FiiO F9 are triple driver IEMs which pack in two balanced armature drivers and one 9.2mm dynamic driver inside each earpiece. The dynamic driver handles the bass and the sub-bass frequencies whereas the BA drivers are tasked with handling the upper-mids and highs. Technical specifications aside, the FiiO F9 have a coloured sound signature which slightly sways in the favour of the low-end, but that’s not to say that the earphones are bass-heavy. Rather, the F9 have a tasteful low-end output which doesn’t eat too much into the other frequencies and packs just the right amount of punch.

You’ll also notice that the bass doesn’t bleed/bloat at higher volumes and that the presentation remains clean even when you’re listening to chaotic EDM tracks from the likes of Infected Mushroom. With that said, I do feel that there’s room for improvement as the IEMs’ bass extension is not as good as I would’ve liked it to be and sub-bass frequencies involving kick-drums and floor toms don’t come out as cleanly. 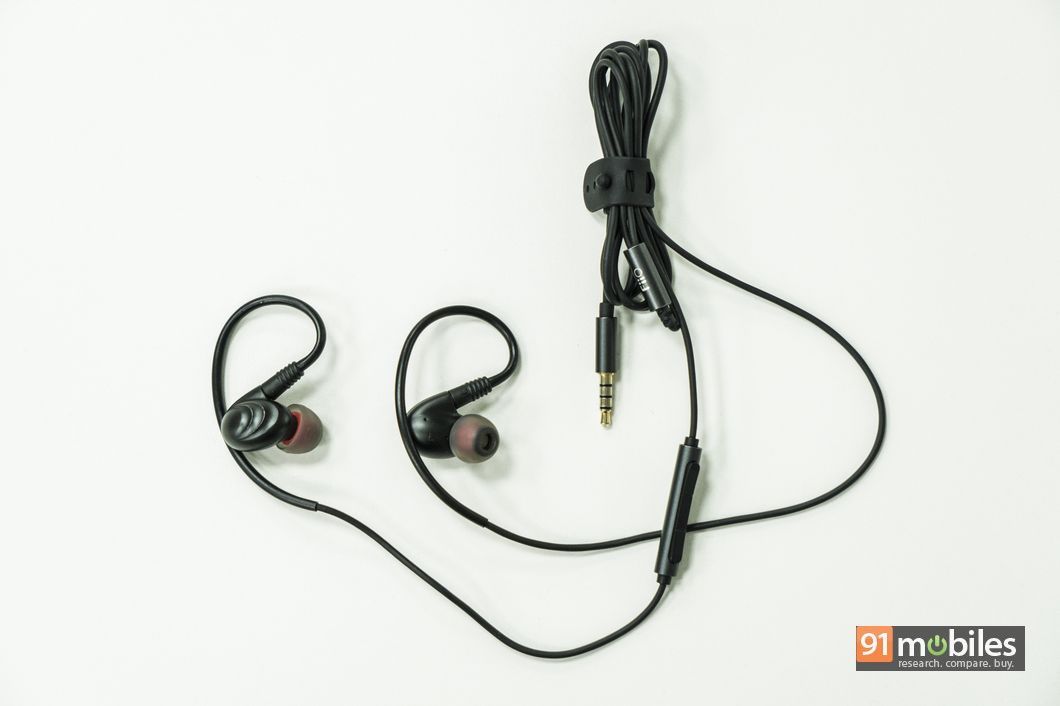 Mid-range is arguably the FiiO F9’s strongest suit and the earphones deliver each note from a singer’s voice with utmost clarity. As I mentioned previously, the frequencies don’t eat into one another and therefore, the vocals don’t sound recessed either. You’ll be all praises for the earphones’ treble response too, which sounds energetic and articulate. Songs from the rock/metal genre have good clarity and resolution and to my ears, the FiiO F9 didn’t sound sibilant either. You’ll also be pleased to hear that the earphones don’t shriek at higher volumes.

As you might have guessed by now, image separation on the FiiO F9 is excellent and you’ll easily be able to identify one instrument from the other in a mix. Sound-staging is as good as it gets with in-ear headphones, but you will get the notion that songs are being directed to your ears in a single lane after listening to the IEMs for some time. 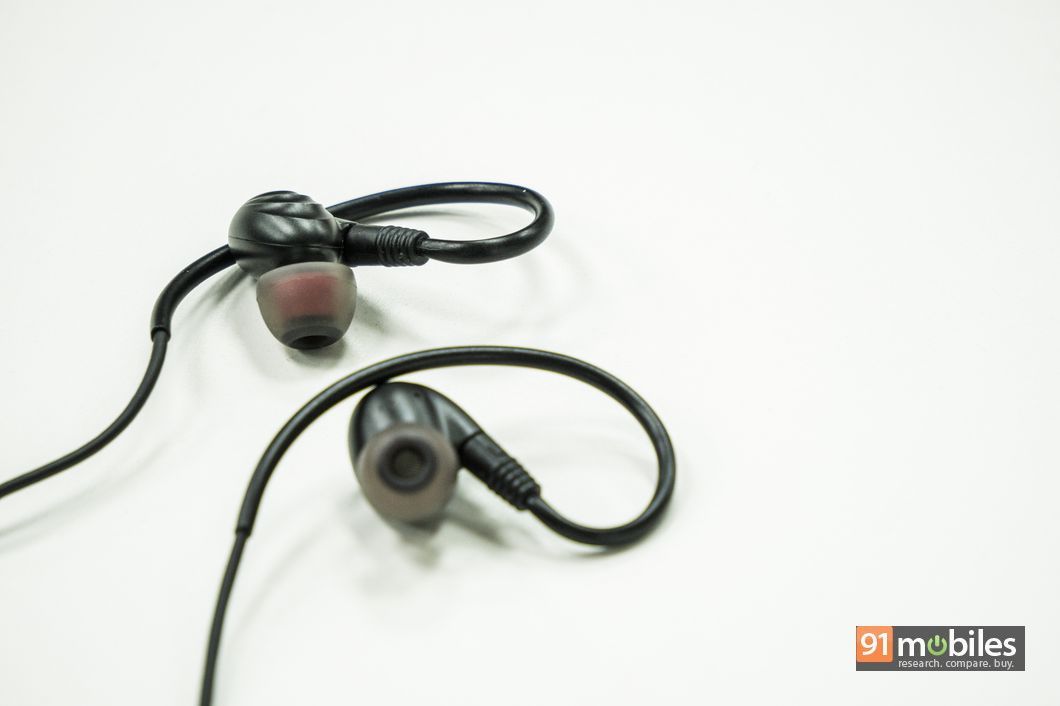 Retailing for Rs 7,999, the FiiO F9 is a quality product and you’ll be hard-pressed to find a more well-rounded IEM at this price point. Not only do the earphones sound incredible, but they look the part too. Moreover, since the earphones come with detachable cables, you need not worry about their shelf life either. Lastly, you’ll get a bunch of useful accessories with the F9, including a balanced-output cable which goes on to show the company’s commitment to delivering Hi-res audio without breaking the bank.

On a side note, the company recently unveiled the FiiO F9 Pro which ship with Knowles TWFK-30017-000 balanced armature drivers. Therefore, if you have a flexible budget and want a better treble response, then you’ll probably be better off with the newer model. All in all, the FiiO F9 carries on the company’s legacy of delivering good quality IEMs at an affordable price point.